I'm going to stop apologizing for not posting every week. At this point, we may need to assume that the entries will come more sporadically for the blog's final two seasons. We're all doing our best.

In another of the show's weirdly moralistic episodes, the family gets into a shrill, shallow argument over whether it's OK for Martin to have a stripper at his bachelor party. As far as I was concerned, it couldn't end quickly enough. 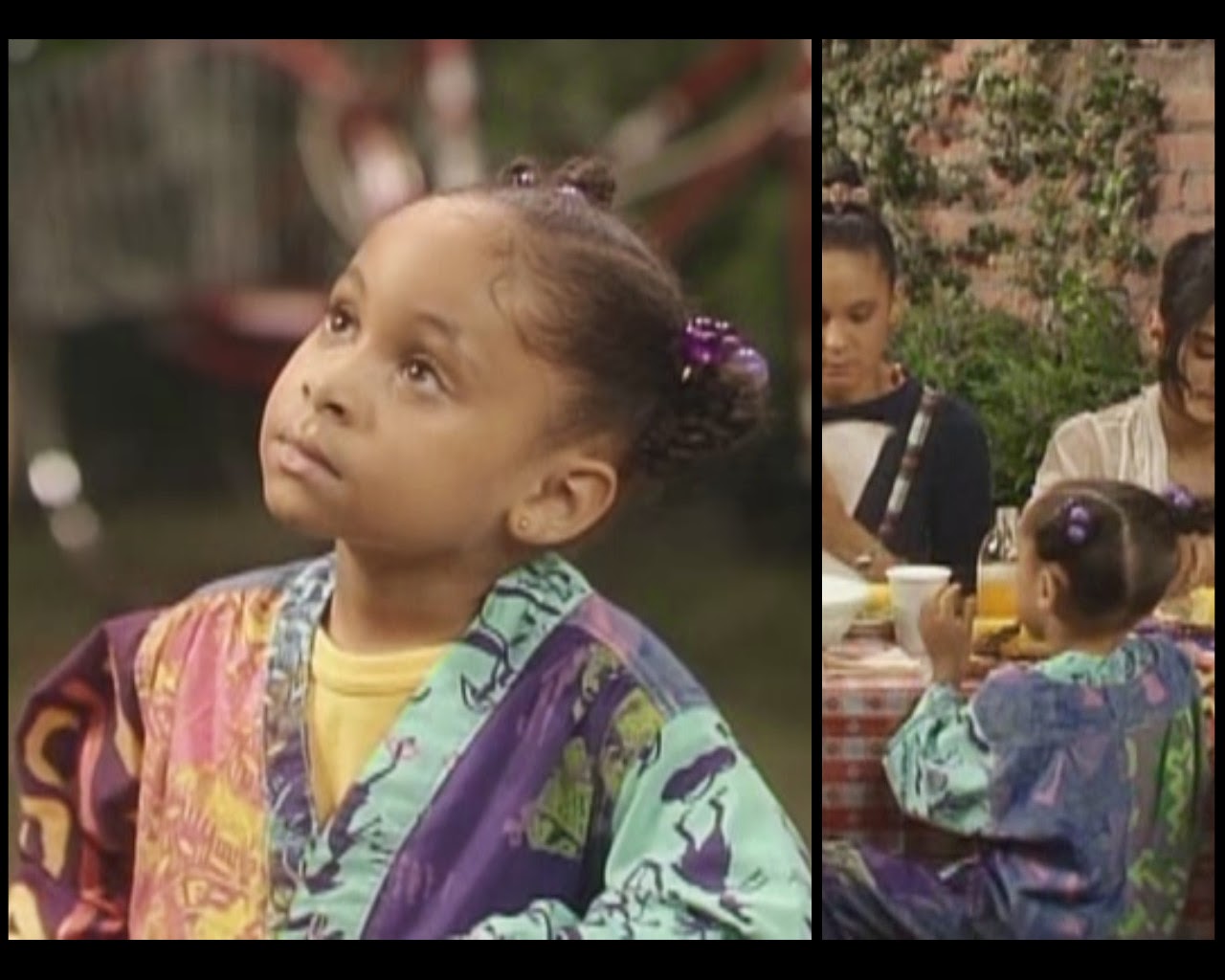 Olivia steps up her onesie game by following Cliff's Cosby sweater example. This one garment has a dizzying number of shades and patterns smashed together, and it works only because it is stronger than either of us. I bow down to this clown jumpsuit's superiority. It has won. 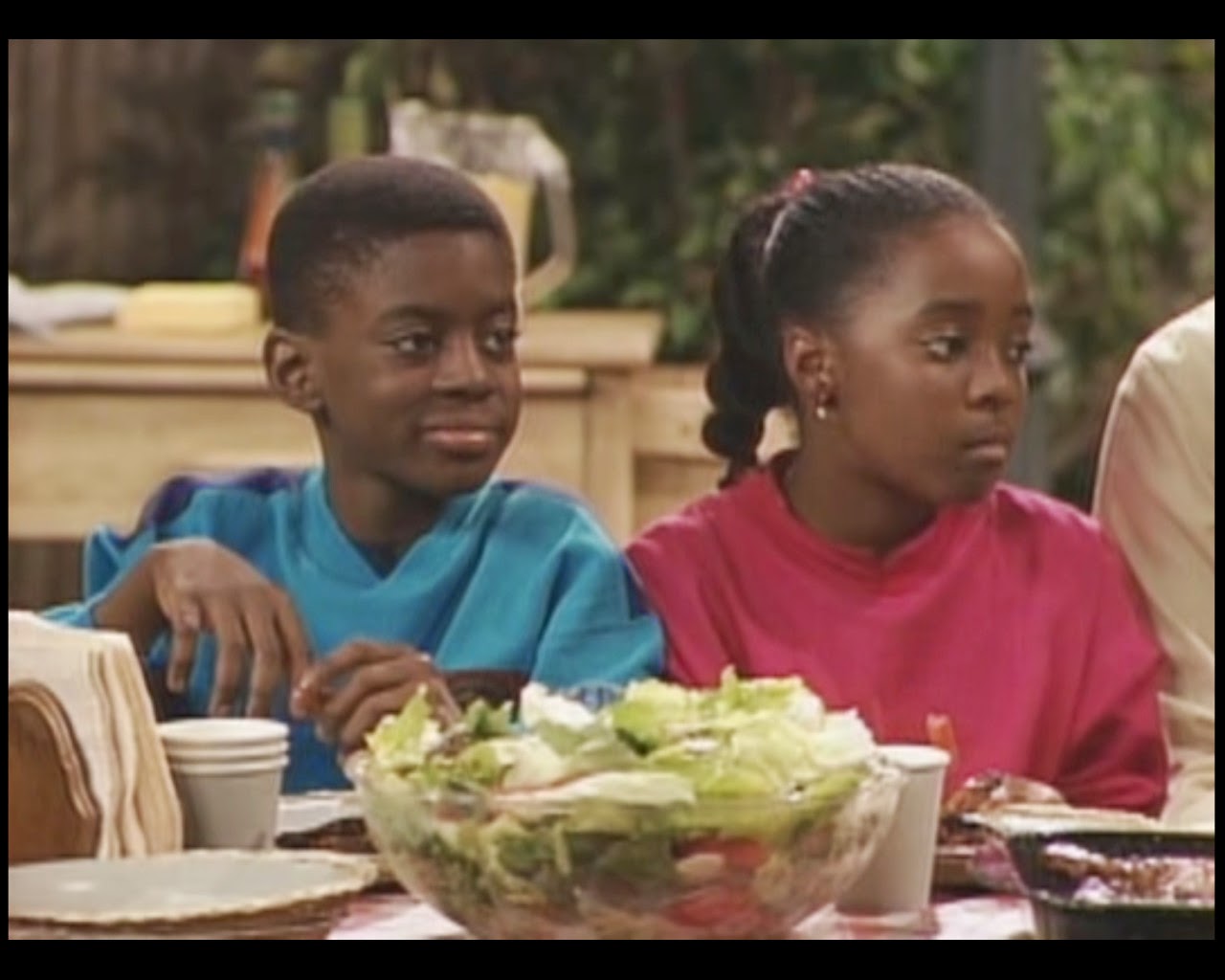 It's so boring having no lines.

Rudy barely features this week, and looks pretty bummed about it. Kenny shows up, too. No one cares about their opinions or their clothes or my opinions on their clothes. Moving on. 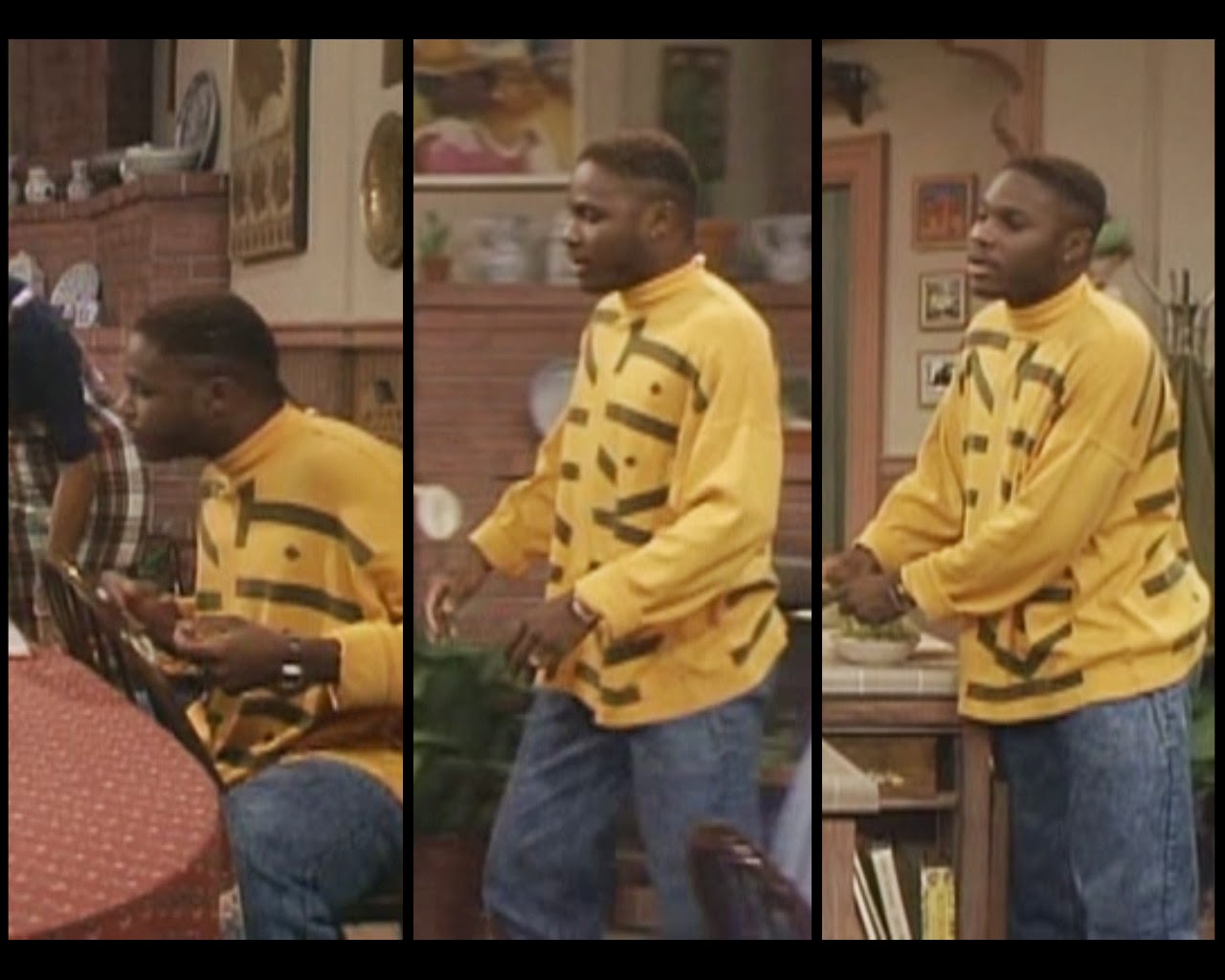 It's so boring having no style.

Theo has been carting out yellow shirts with black print on them since episode #3.01; he did it again in #4.10 and most recently in #5.26. Which is to say: he hasn't worn this shirt before, but he basically has. It's as good a look as I can hope for from him at this point. 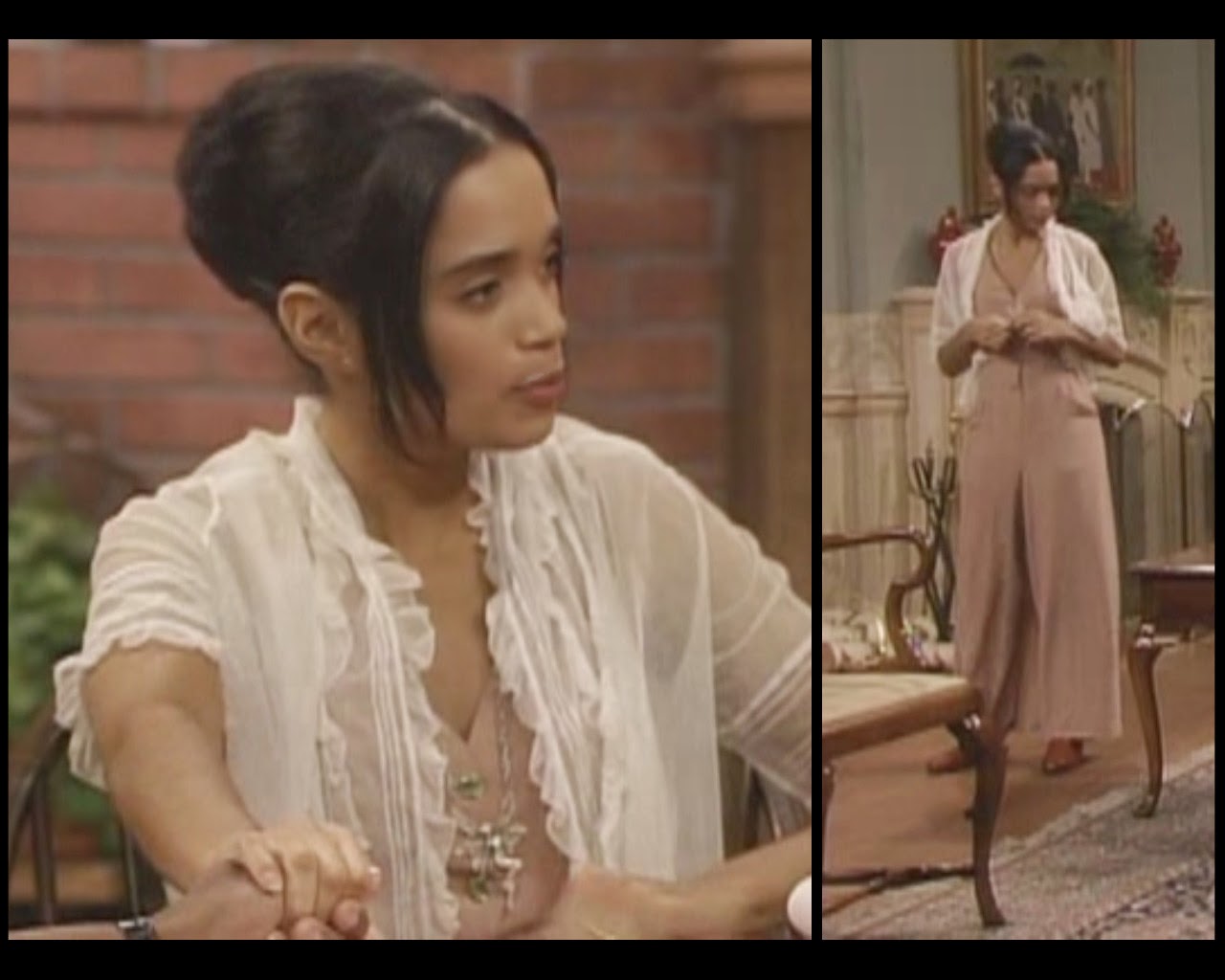 I call this hairdo the "Back Bump-It."

Though she's just as likely to be shabby as she is to be chic, Denise serves up some casual elegance this week. I think her dusty rose jumpsuit and white frilly blouse are intended to position her as a more mature, stately woman so that her arguments on the feminist value of deploring strippers seem more grounded. This is not a vagrant weirdo talking, this is a student and mother. The show vacillates wildly in terms of how seriously it wants us to take Denise each week, so sartorial cues like this are really important. Though she's still wearing a giant fairy pendant, so maybe take her statements with a grain of salt regardless. 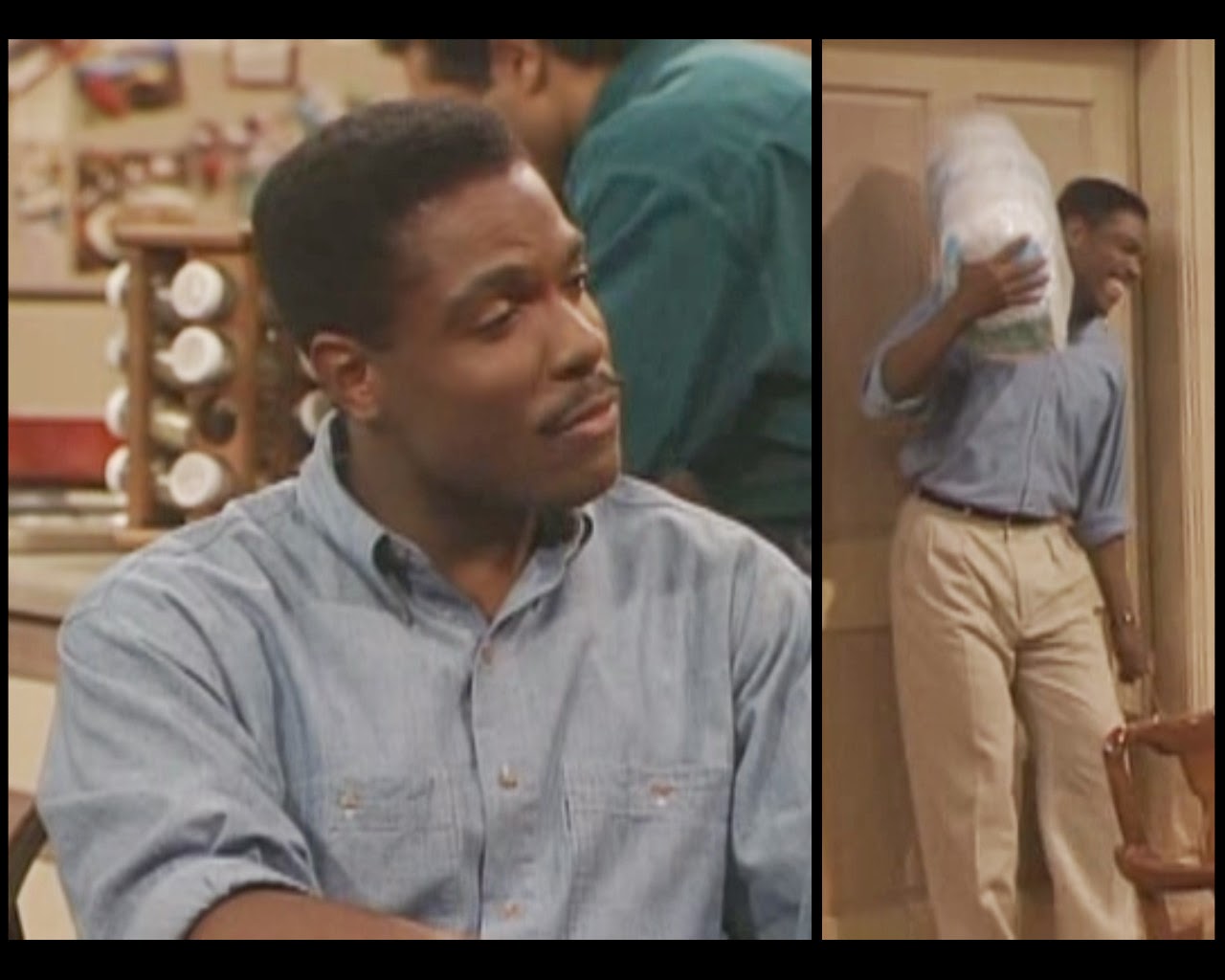 It's so boring being boring. 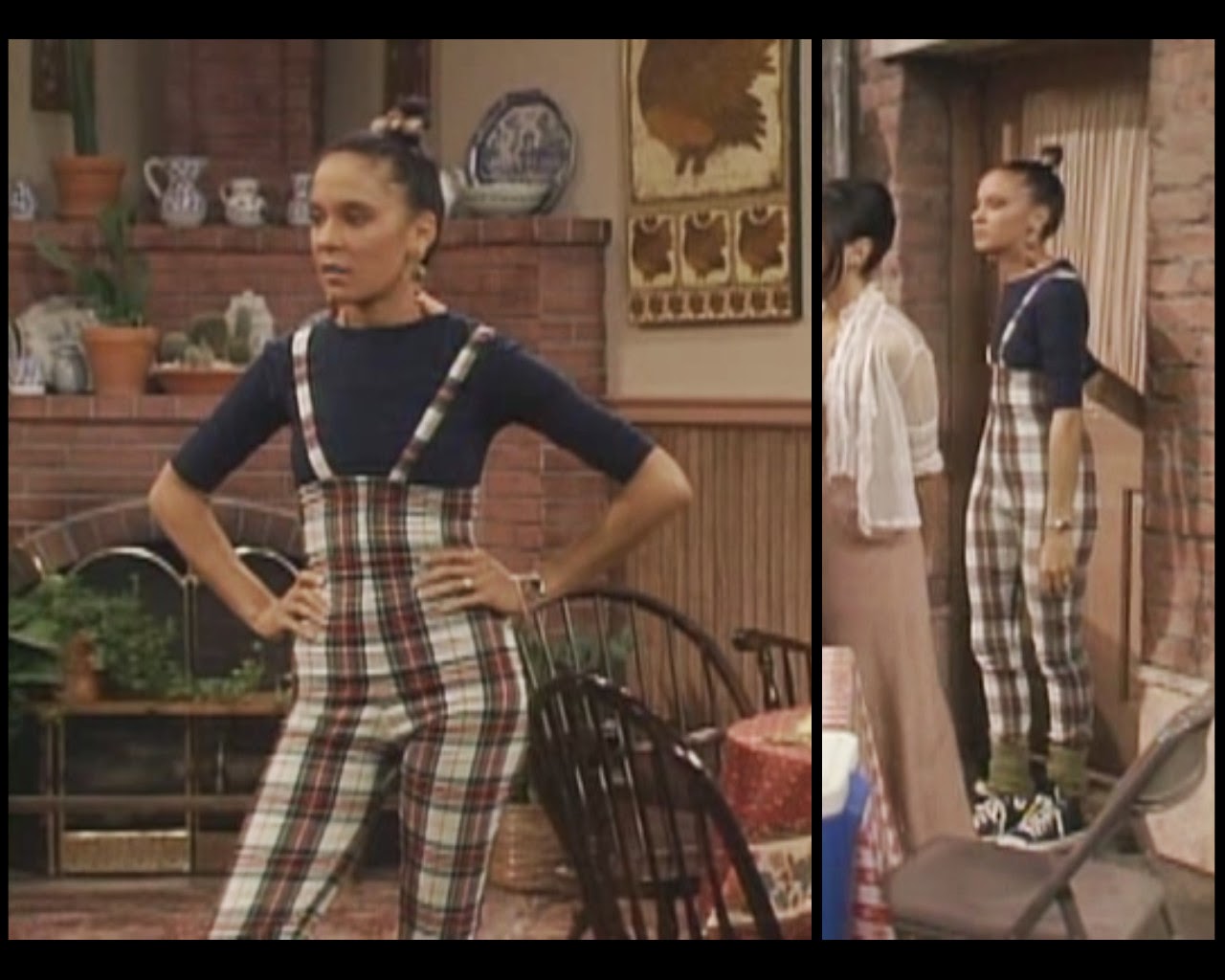 There aren't words. It's so implausible that I'm just going to assume that this is the best thing that has ever been worn in the history of humanity. Seusseralls for the win. 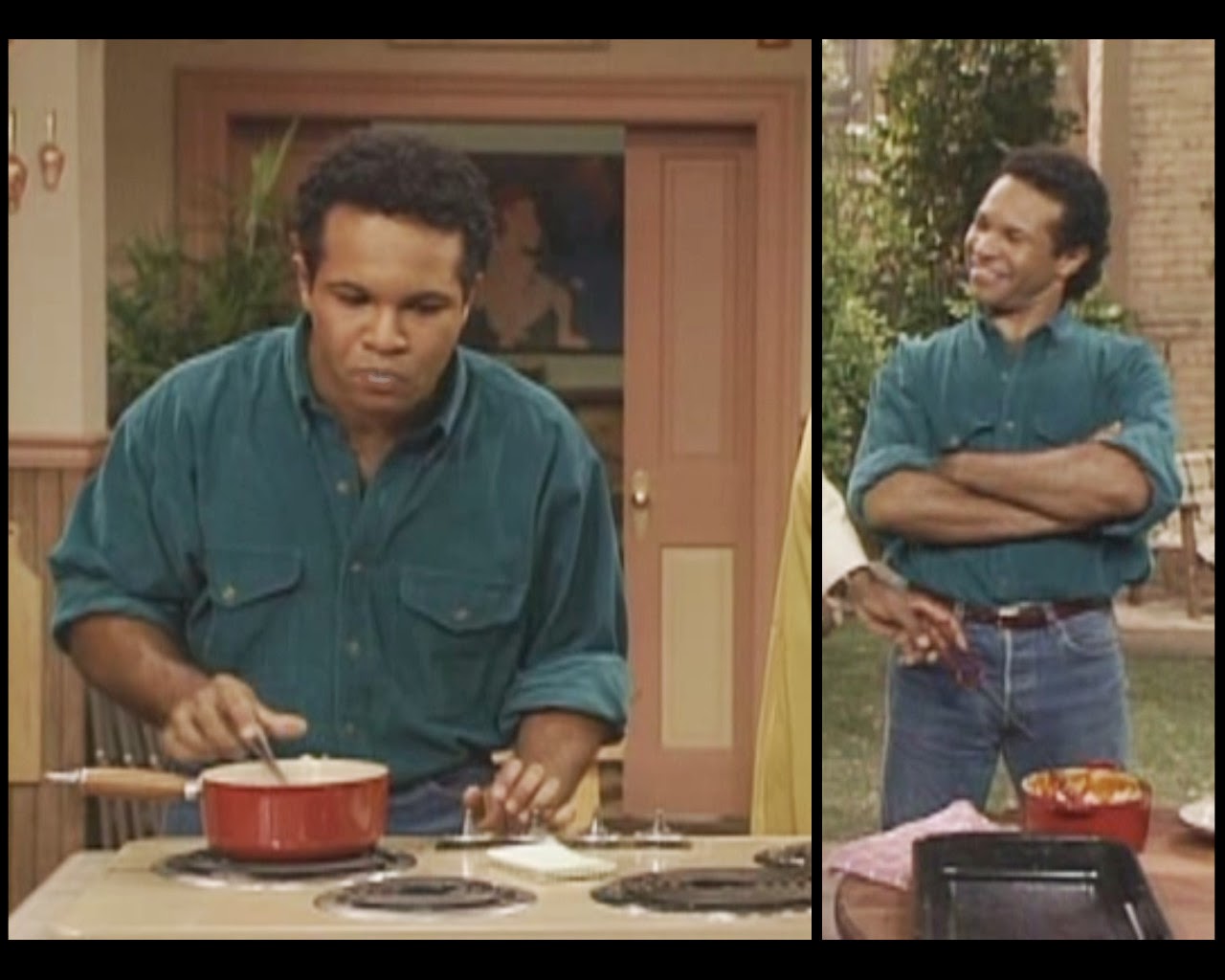 I'm too bored to even write about how boring this is.

Not even Elvin cares what Elvin is wearing. It'll pretty much always be that same pair of jeans with a different buttoned shirt made of thick fabric. 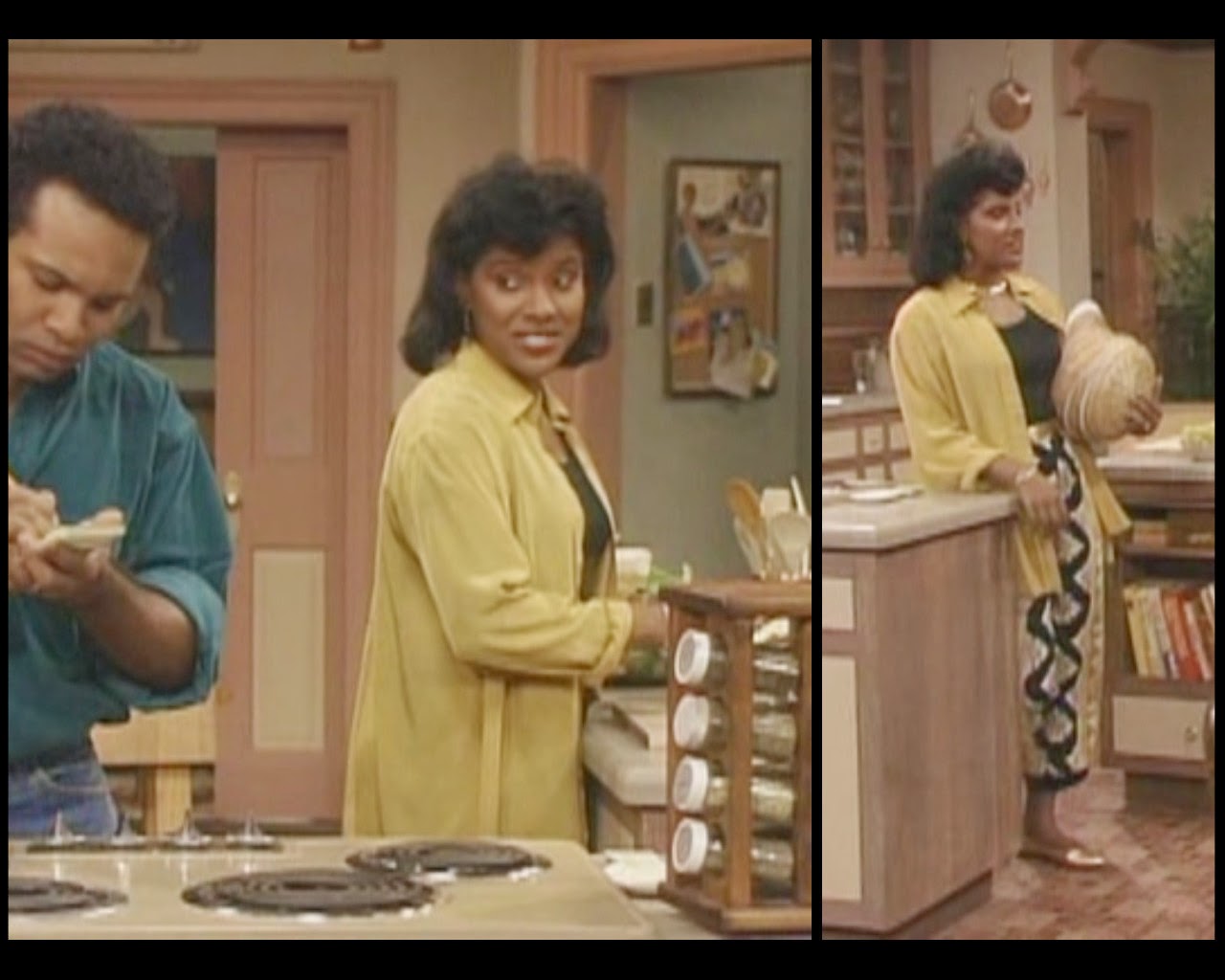 There's precious little of Clair this week, probably because they couldn't think of a suitably scathing yet insightful way for her to end the argument for good. Like, if she's talking, it has to be wisdom from the depths. The writers weren't up to the task, it seems. The costumers struggled a little, too, trying to combine the earthy qualities of a mother cooking for her family with the regal qualities of a pharaoh ruling over her queendom. Nothing seems to gel, despite the fact that everything is part of the same color story. The high, loose pants and saggy blouse aren't working in my eyes. Nice gold flats, though. 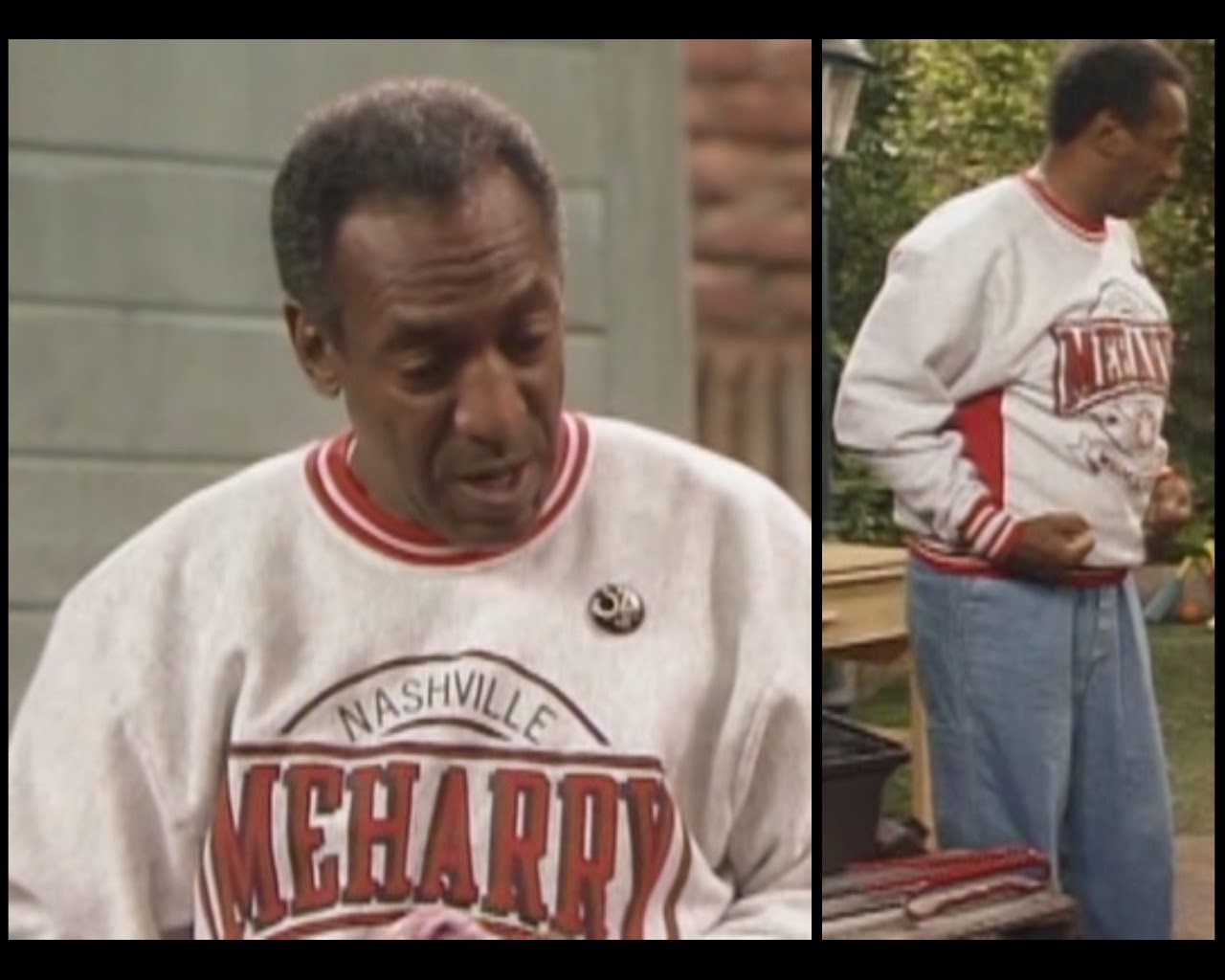 Yup, that's a sweatshirt and a pair of extremely baggy jeans, alright. 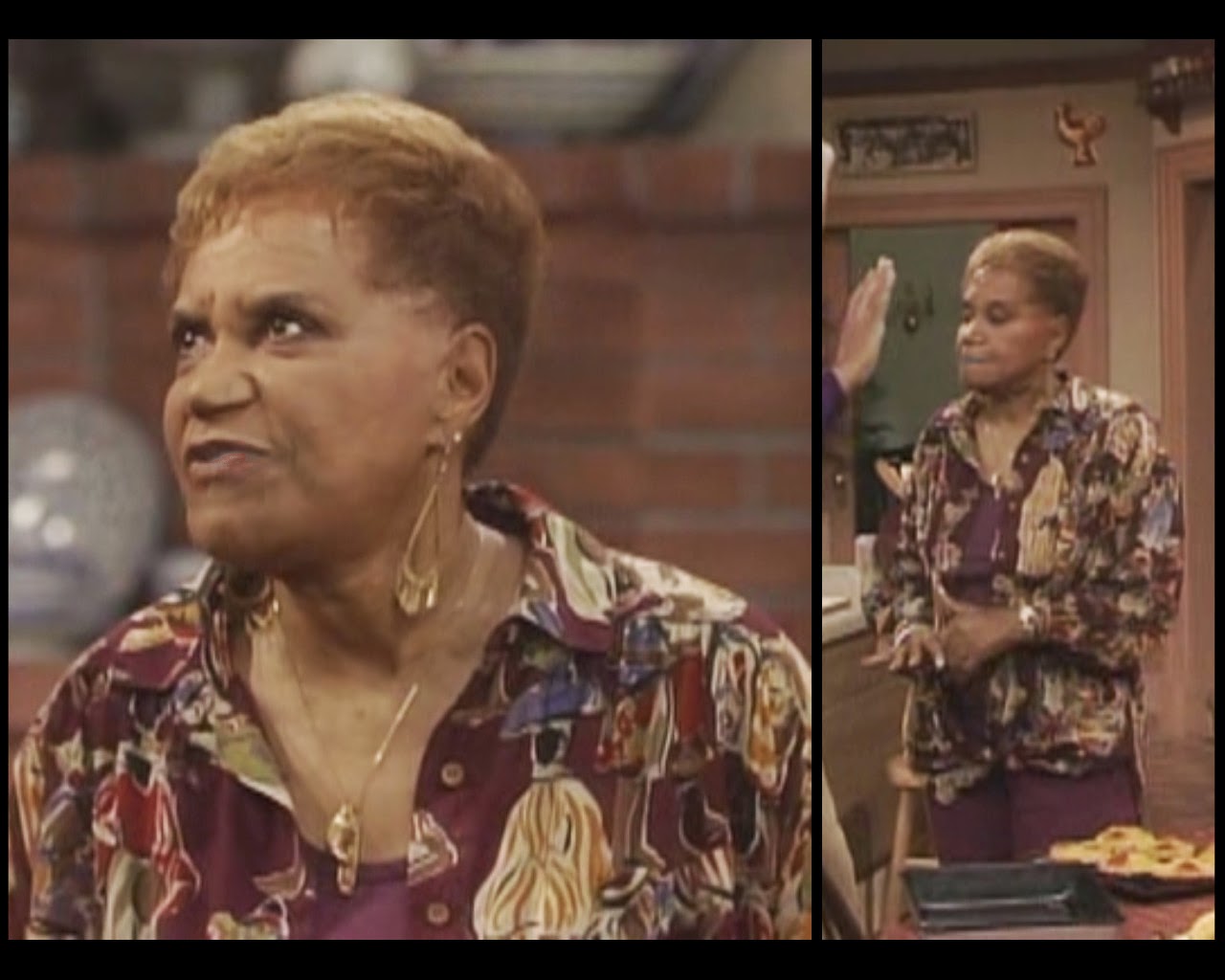 I love how completely impossible it is to capture Anna making a simple, relaxed face. She is always giving it. She's also giving it in terms of fashion. This is the sort of dressed-down elegance that Clair didn't manage: the pants fit a little better, the tied bottom adds control to the otherwise loose top, and the mostly-maroon color scheme makes her look rich and regal while still allowing for some home-spun, busy-ass patterning. Well done. 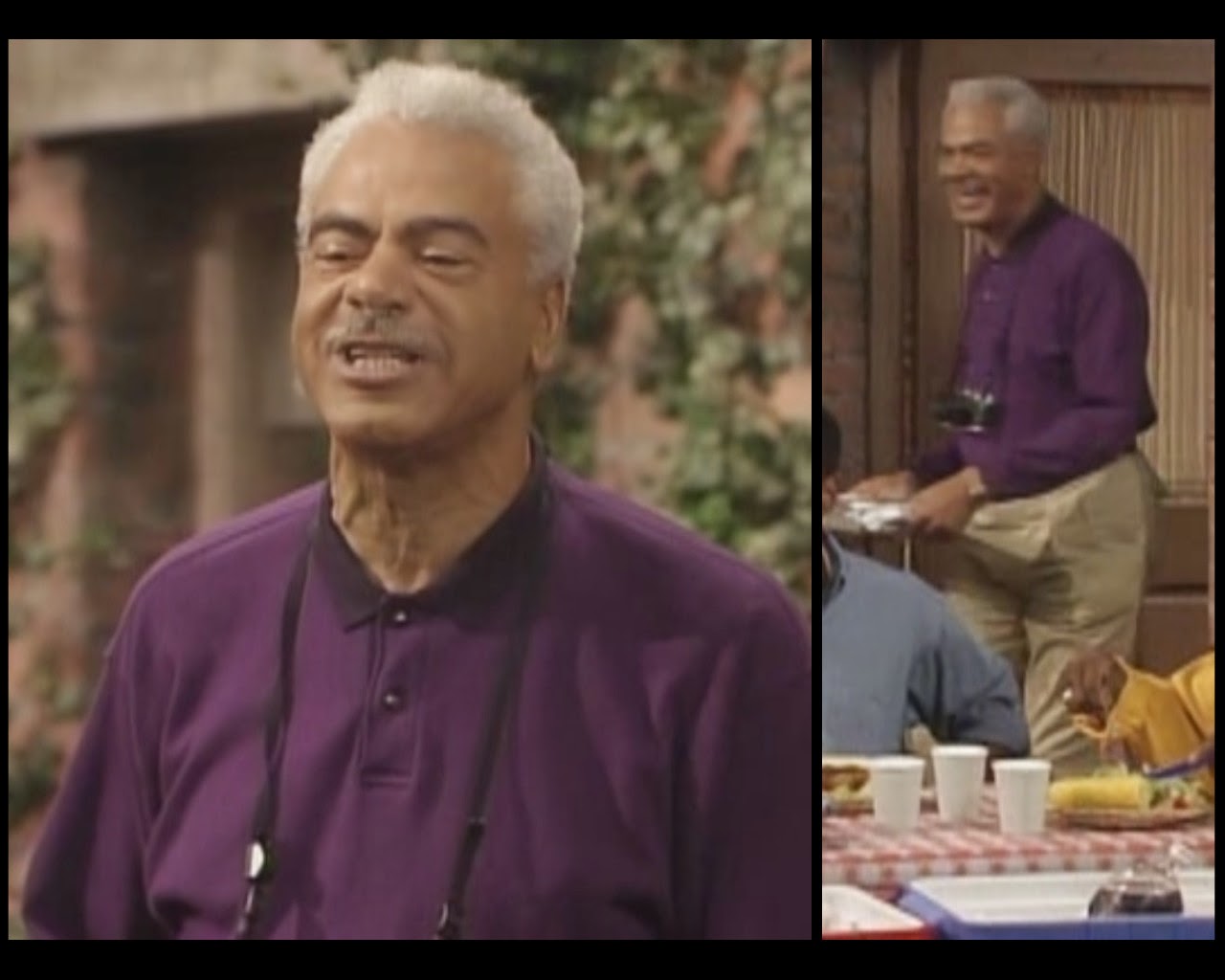 I love that grandpa is pro-burlesque.

And then Russell closes us out in khakis and a long-sleeved purple polo. Nothing to see here.

Things are getting weird now that the show is in the '90s. I finally thought I knew what to expect from everyone, but those expectations are forever getting turned on their head. At least that'll keep it exciting for future entries, whenever I get around to writing them.
Posted by Unknown at 4:02 PM