Apologies for skipping last week; I started a new job and am still adjusting to the schedule.

Anyhow, we begin the season with the children all shipping off to their respective schools. Denise has enrolled in an education program, Theo is back at NYU, Vanessa is starting college a year early, and Olivia is going to school for the very first time. Rudy should be headed to class as well, but is too embarrassed to appear in front of her friends because she didn't develop breasts over the summer. Her efforts to speed the process along with questionable pills are of course a failure, and she ends up getting over it because that's how problems work in sitcoms. 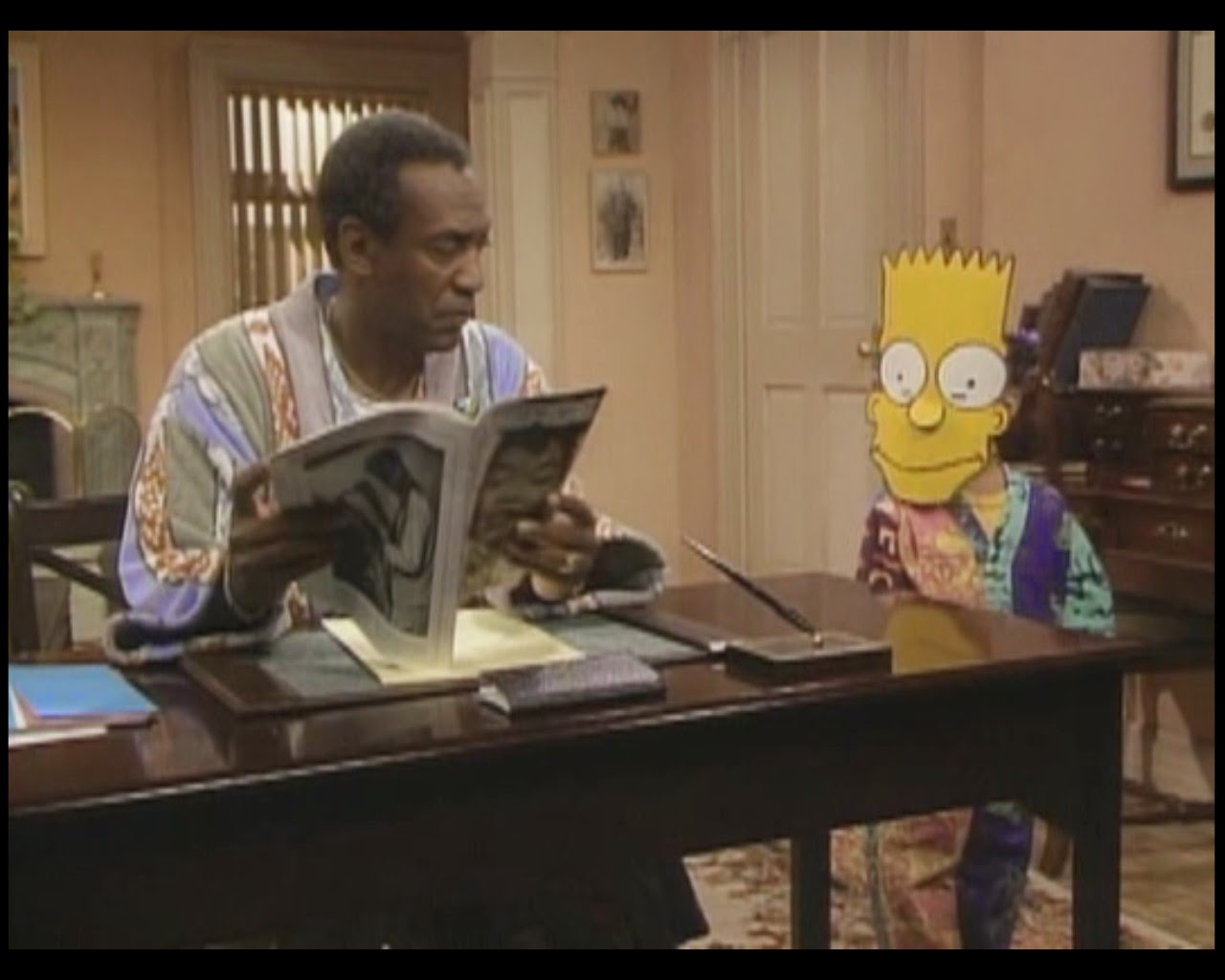 She was probably legally prevented from saying "Eat my shorts."

The first image we see, even before the opening credits, is Olivia greeting Cliff in a Bart Simpson mask, referencing the mounting popularity of The Simpsons, which ran in the same time slot as The Cosby Show. Cheeky cheeky, Bill. 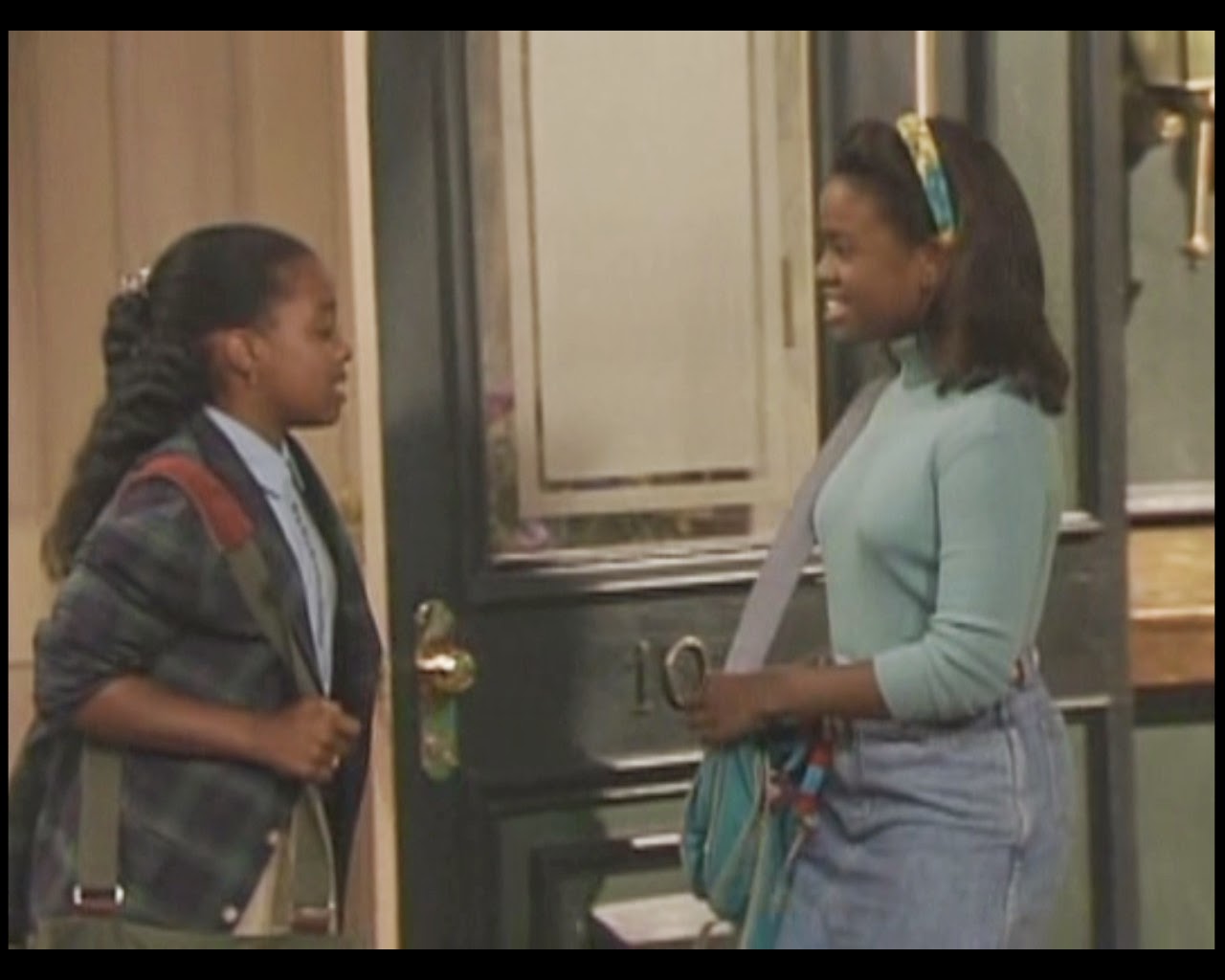 This is Bryce B. Barard as Margie. She shows up only to scare Rudy with her boobs. She's wearing a really minty teal with light denim, which is such a terrible choice. I can kind of support a turtleneck with a denim skirt (kind of), but the turtleneck has to be absolutely any color other than that. The richer teal of her bag, for instance, would have been a better selection. From the little we see of it, I can also tell that I hate her belt. The headband isn't great either. You know what? Go away, Margie. 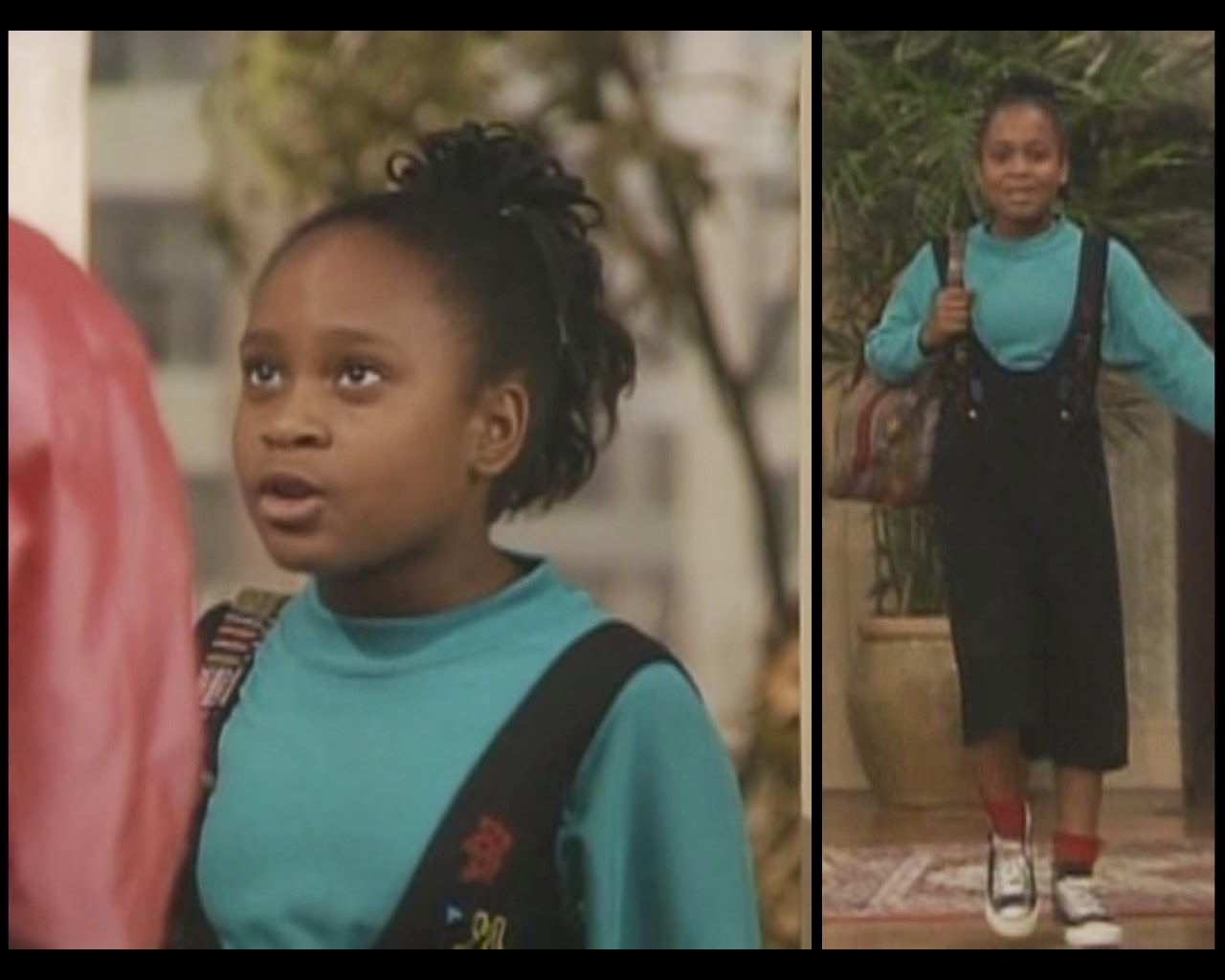 Dealing pills. Watch for Amy on season 3 of OITNB. 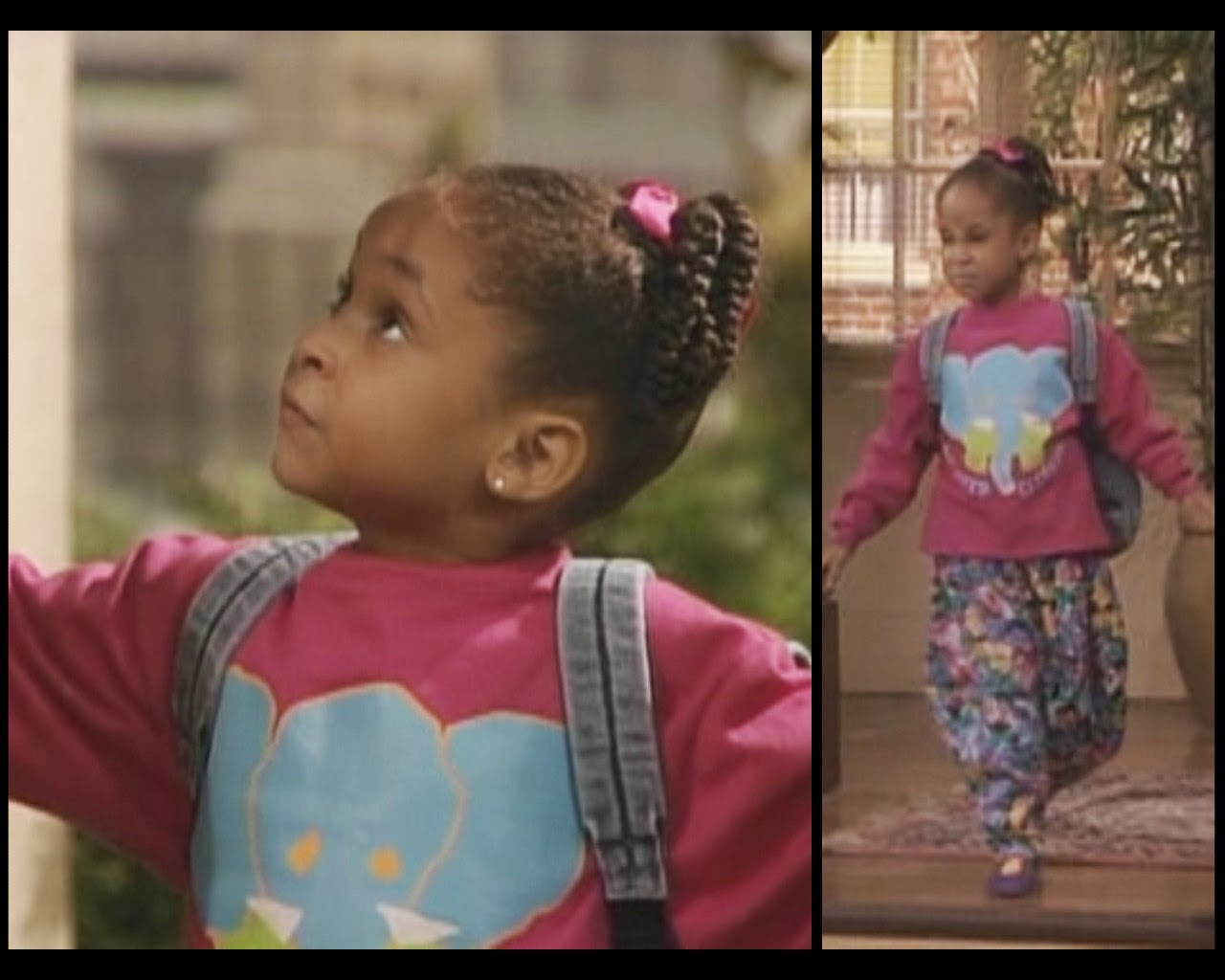 Give this girl a Z snap.

To say "ready for school" to the world, Olivia puts on her cutest top (look at that elephant and how cute it is!) and her biggest, floweriest pants (which are so big and so flowery that you can't even believe it) and her meanest fact (the shot on the right says it all) and it is on. She's so blazingly confident in herself that I can't do anything but accept this sartorial creation as flawless. 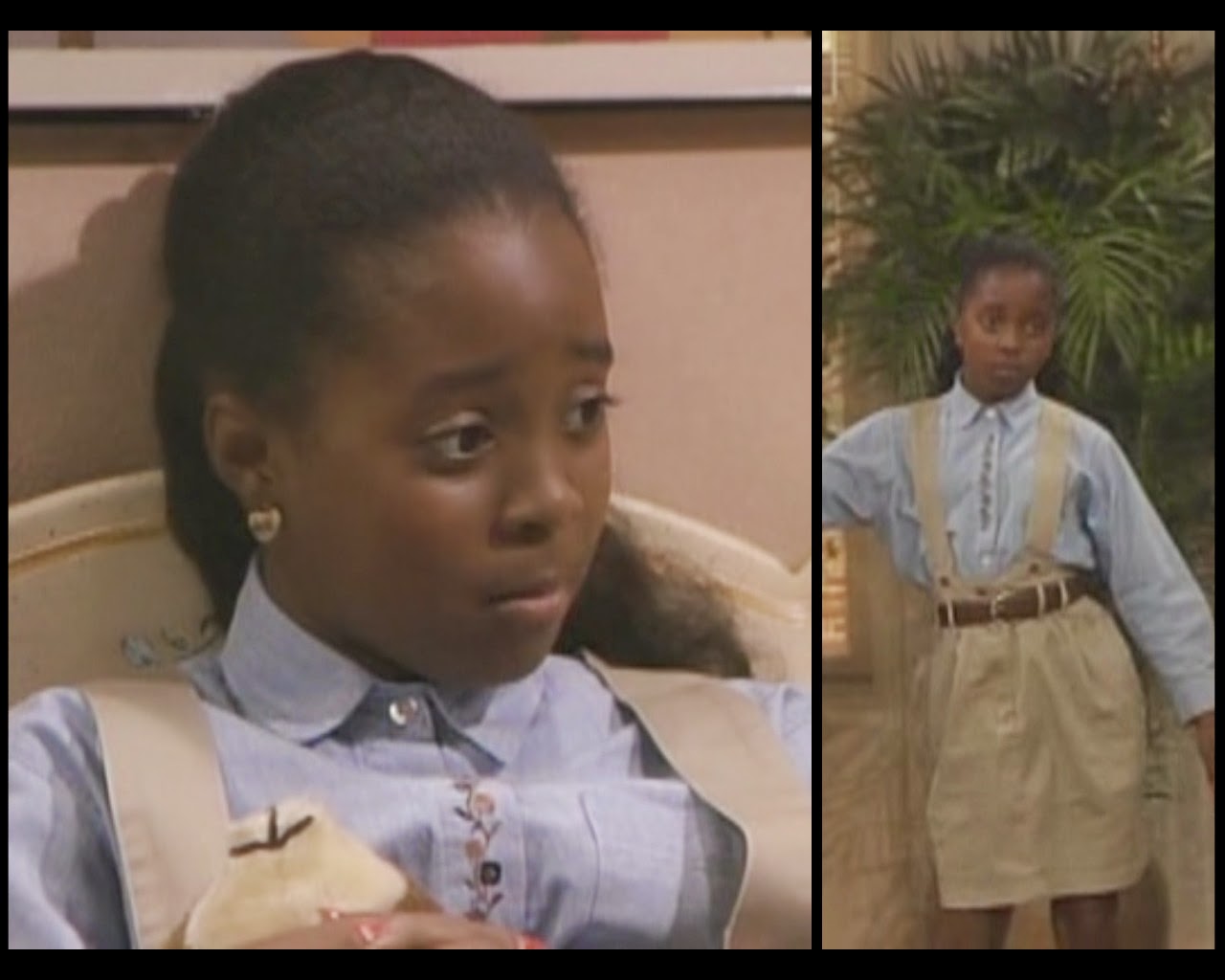 Rudy loves to wear this shirt with overalls or suspenders, as she did most recently in episode #6.22. This time she's gone for a khaki skirted look. I can't tell if her parents are still buying clothes for her to grow into or if this is one of those situations where nothing ever fit right in the late '80s and early '90s. It's conservative overall, but also boring and ill-tailored. Not great. 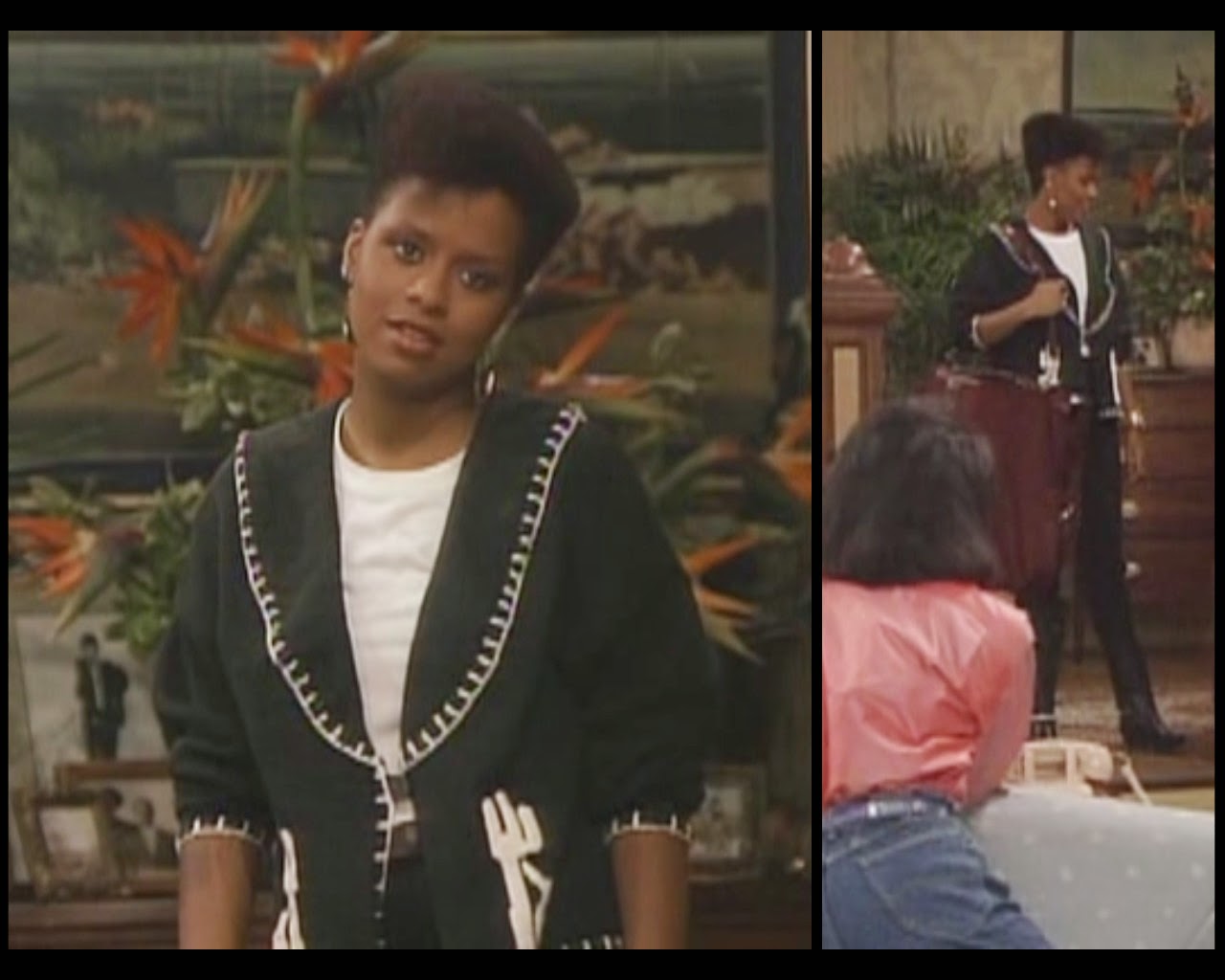 This looks like something Sondra would wear, doesn't it? From what I can tell, she never wore it on the show, but I get a distinctly Sondra vibe from this getup. The whole Southwestern situation, with the cactus and the thick contrast stitching and the rustic construction of the top, is a step back for Vanessa, which I guess is why I'd rather blame her sister. Though she tries to sleek it up by making the outfit mostly black, it's not something that I think can be salvaged. 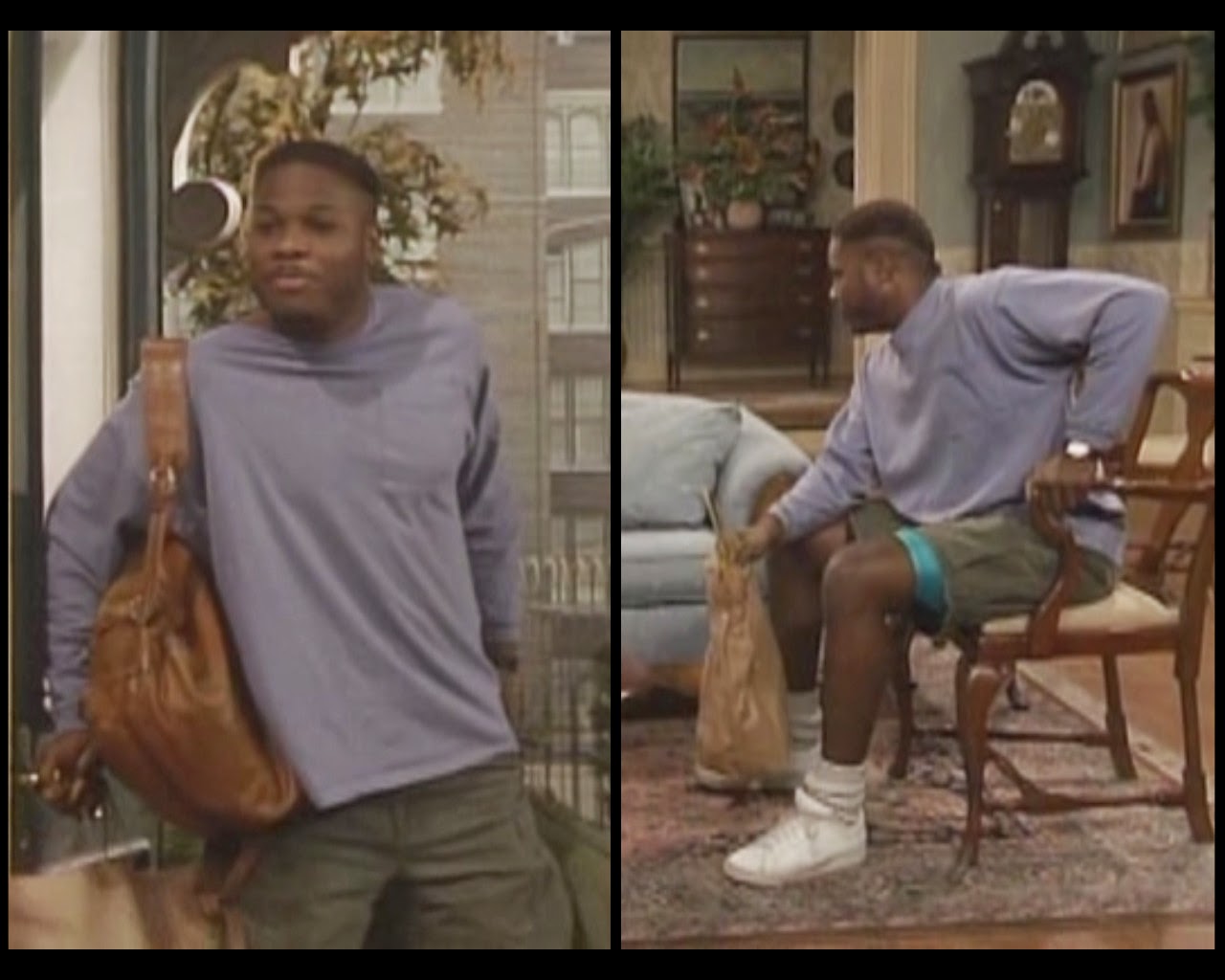 Too sad to caption.

Oh man, Theo. You went to Europe and came back looking like this? I had hoped that a summer away would drench you in style. But I'm seeing white sneakers, bunchy athletic socks, cycling shorts peeking out from underneath your cutoff cargo shorts, and a sloppy t-shirt. The fact that there are colors to be seen might be the only saving grace here, and even that is generous. Go back and study, mister. Milan, Paris... hell, you live in New York! How are you still getting this so wrong? 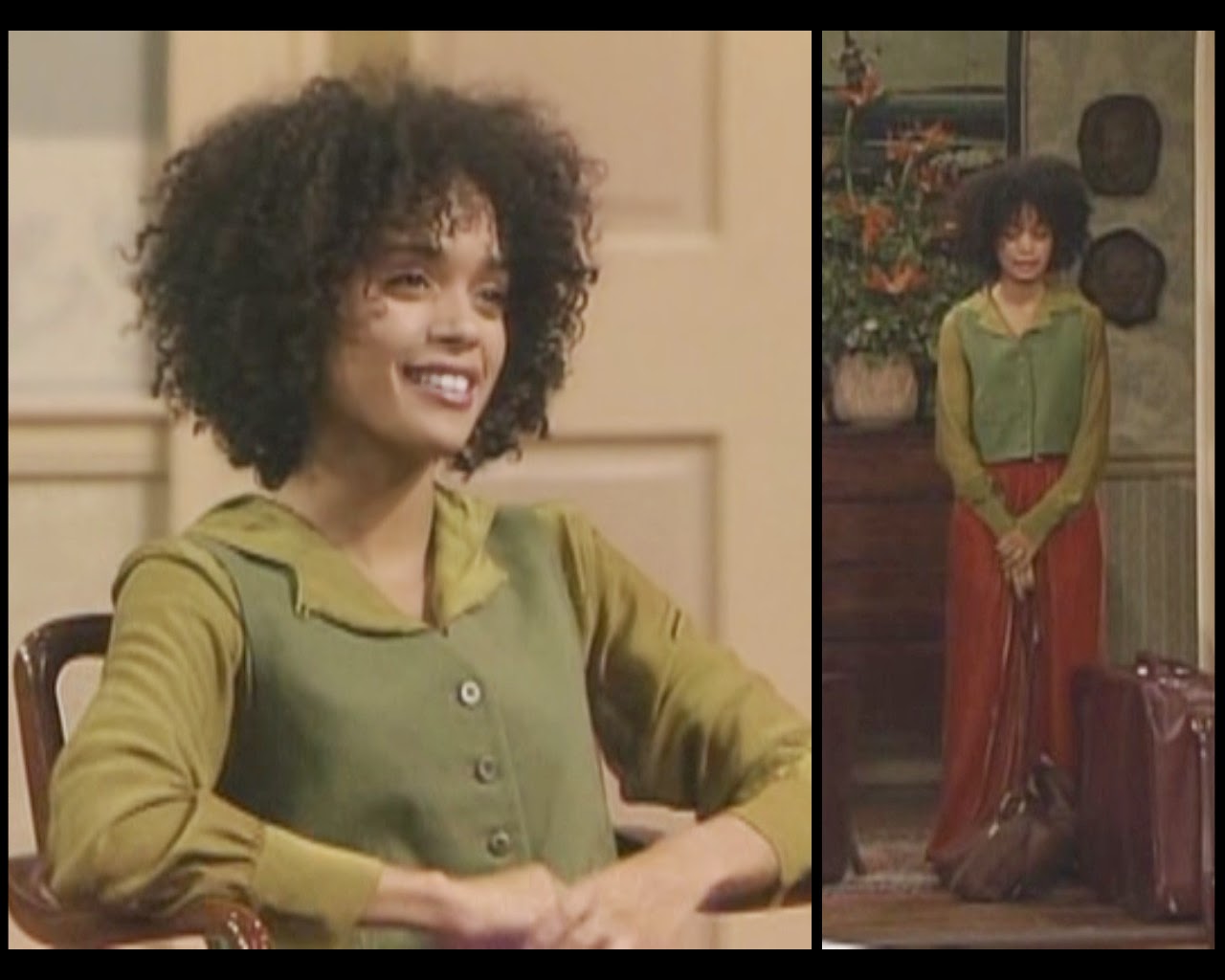 I want to hug her.

Sexy Pinocchio. It goes without saying that I love everything about this. It's odd, it's anachronistic, it's bordering on ugly, but she carries it off. Olivia got her swagger from her stepmom for sure. 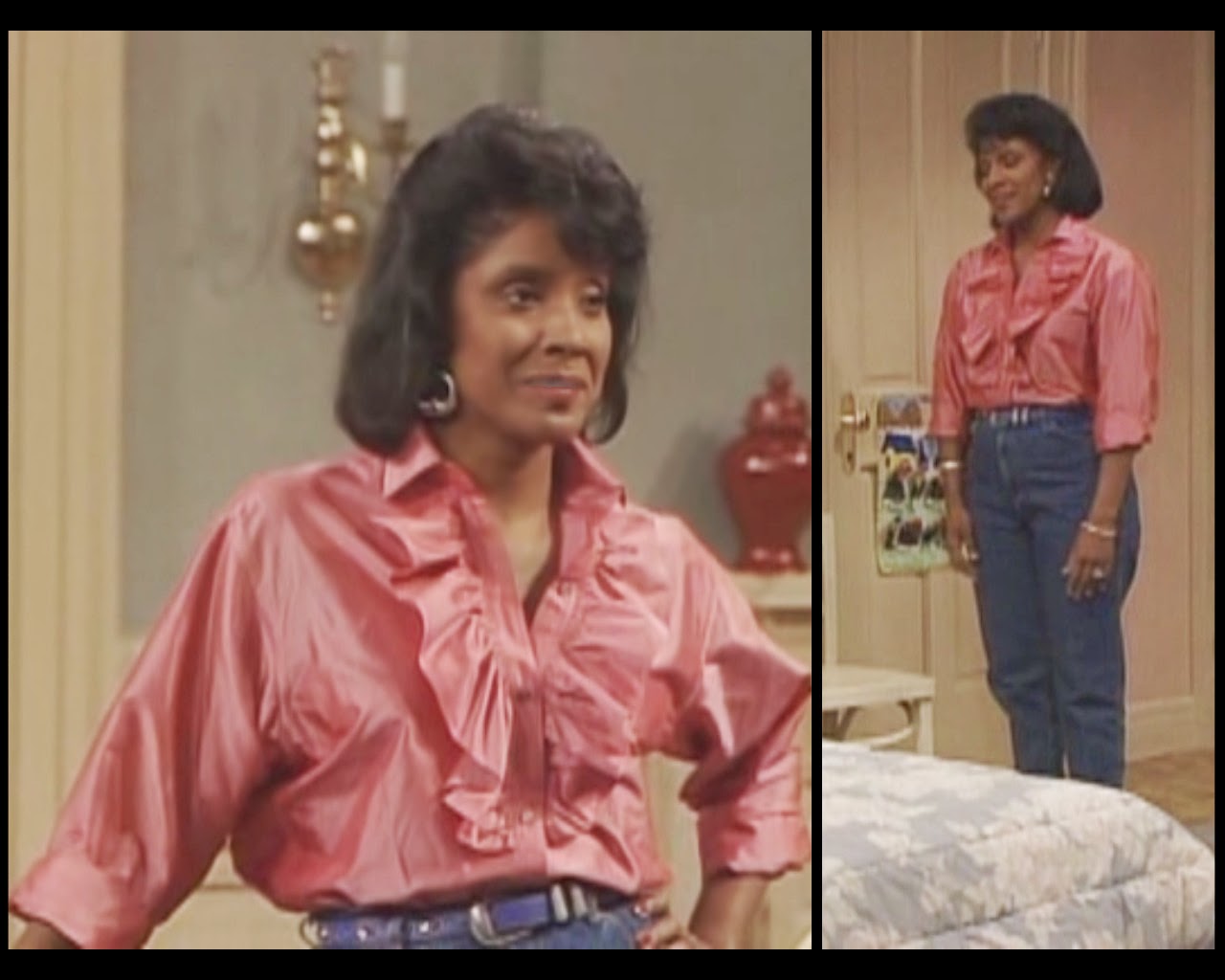 WHO PUT CLAIR IN MOM JEANS I AM FURIOUS RIGHT NOW

I apologize. That was uncalled for. But what are those jeans? And up top she's almost a literal throw pillow. It's appalling. I'm appalled. 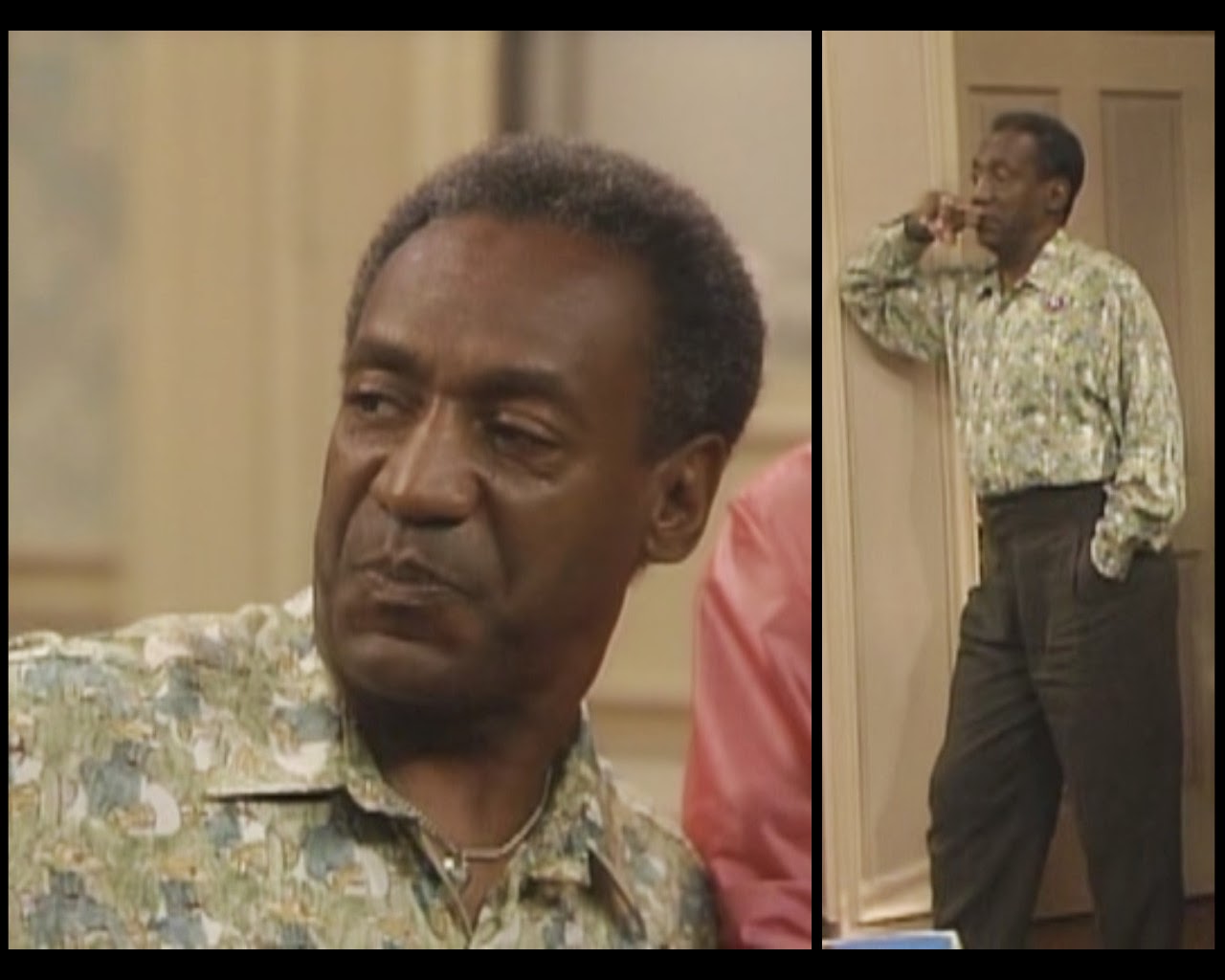 Usually, when Cliff strays from his favored sweaters, he looks more subdued even when he goes for craziness. Maybe shirts just don't come in the aggressive styles he seeks. This pattern is clearly complicated, but the subtler fluctuations between the hues make it easier to look at without protective headgear of some sort. He, like his wife, is wearing his pants too high and too baggy, but at least they're in this one together. I'm pleased with his palette, but tortured by his tailoring.

And we're off and running! Two seasons left. Who's excited?
Posted by Unknown at 8:00 AM