Denise continues to be inspired by the idea of teaching children with learning disabilities, but is less invested in learning how to teach children with learning disabilities. When she catches two minutes of Olivia's teacher "rapping" with the children about math, she assumes that she can simply learn songs and dances that will engage her class, bypassing the whole pesky process of getting a college degree or two. Of course, no one is as confident in her as she is in herself, and eventually she caves and re-enrolls in school. 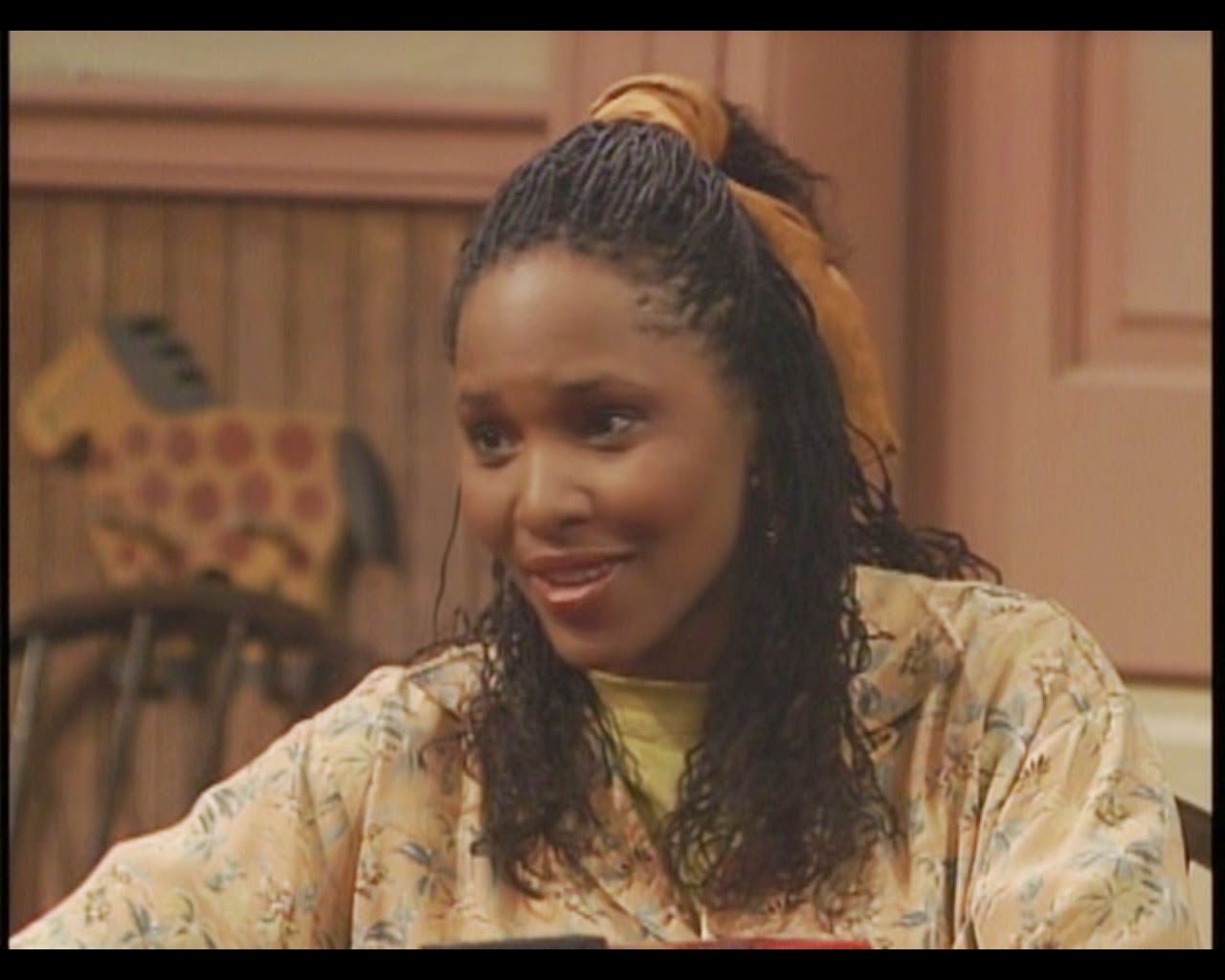 One of many voices of reason.

Her friend Rebecca, played by Suzzanne Douglas, is a teacher herself. Not that this fact convinces Denise that this woman might actually know a thing or two about how to become a teacher. Her first scene is spent sitting at the kitchen table, so her lower half remains a mystery. The top portion of her outfit is a baggy printed shirt over a solid tee. It's a pretty average creation, except for the fact that the combination of elderly pastel floral and sickly chartreuse could probably set your eyes on fire if you stare too long. 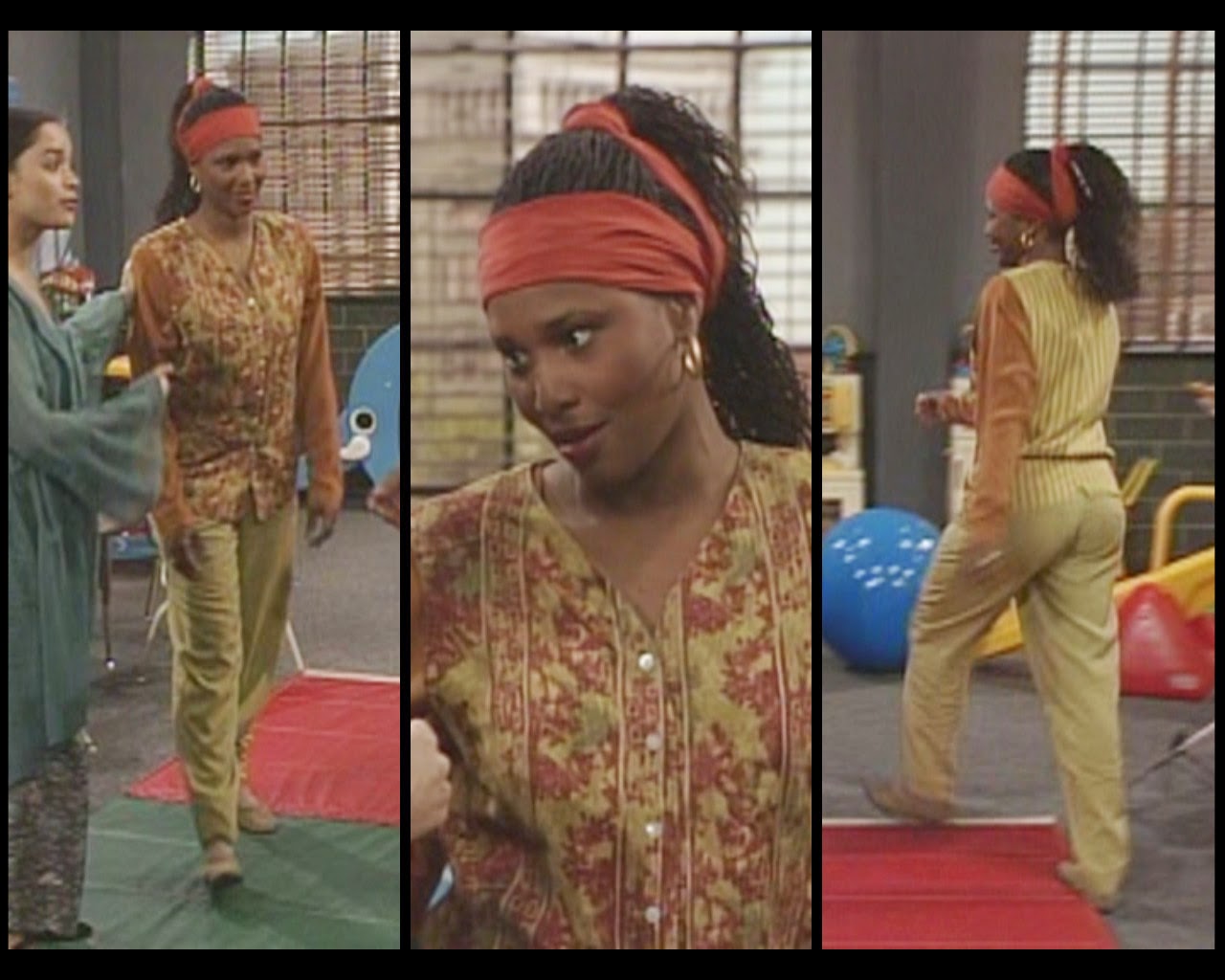 Maybe her students design her clothes?

This outfit makes less painful use of the visible light spectrum. It's not great, but it's less horrible. I actually enjoy the stripes on the back of her vest, though the front suggests a continued commitment to looking like grandma's couch. Like, she is straight-up upholstered there. The pants aren't fantastic, and the shirt is similarly only tolerable. I guess preschool teachers aren't known for their sense of style in general, though. 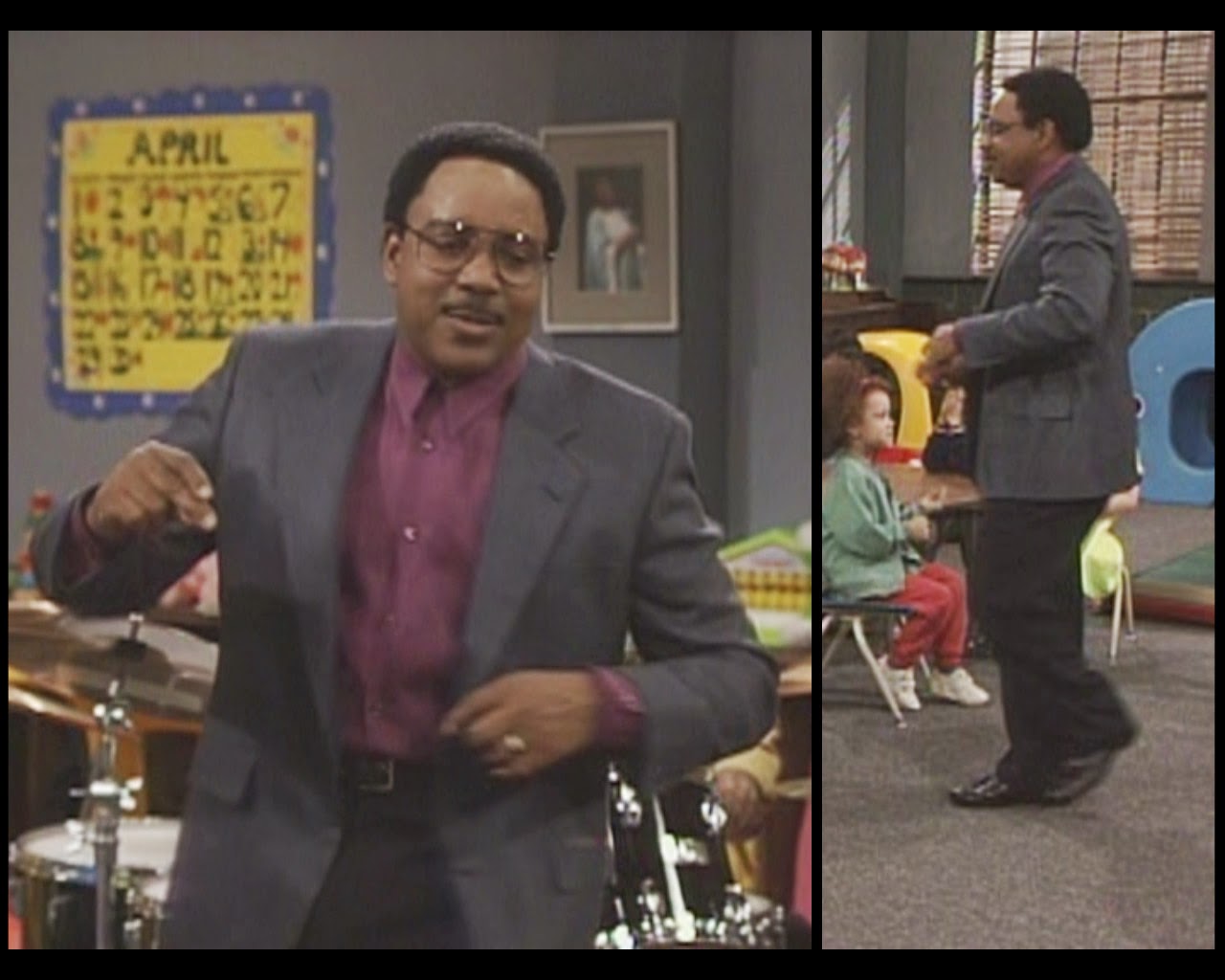 Why didn't his music career take off, I wonder?

Case in point: Uncle Wilton. The man behind Denise's career awakening is an actual educator named Wilton Banks; his CD is still available for purchase, though I wouldn't recommend listening to it for extended periods of time if you value your sanity. Anyway, he seems a little dressy for a teacher. If I were going to be surrounded by children all day, I'd worry about getting paint and glue and god knows what else on my clothes. He's a more daring man than I. He knows how to use color, at least; the purple is just flashy enough to offset that charcoal/black combo, yet doesn't seem ridiculous or ostentatious.

I should mention that jazz musician Max Roach features in this episode playing the drums for Uncle Wilton, but he receives so little focus that I opted not to include him. Most of what he wears is obscured by his drum set anyway. 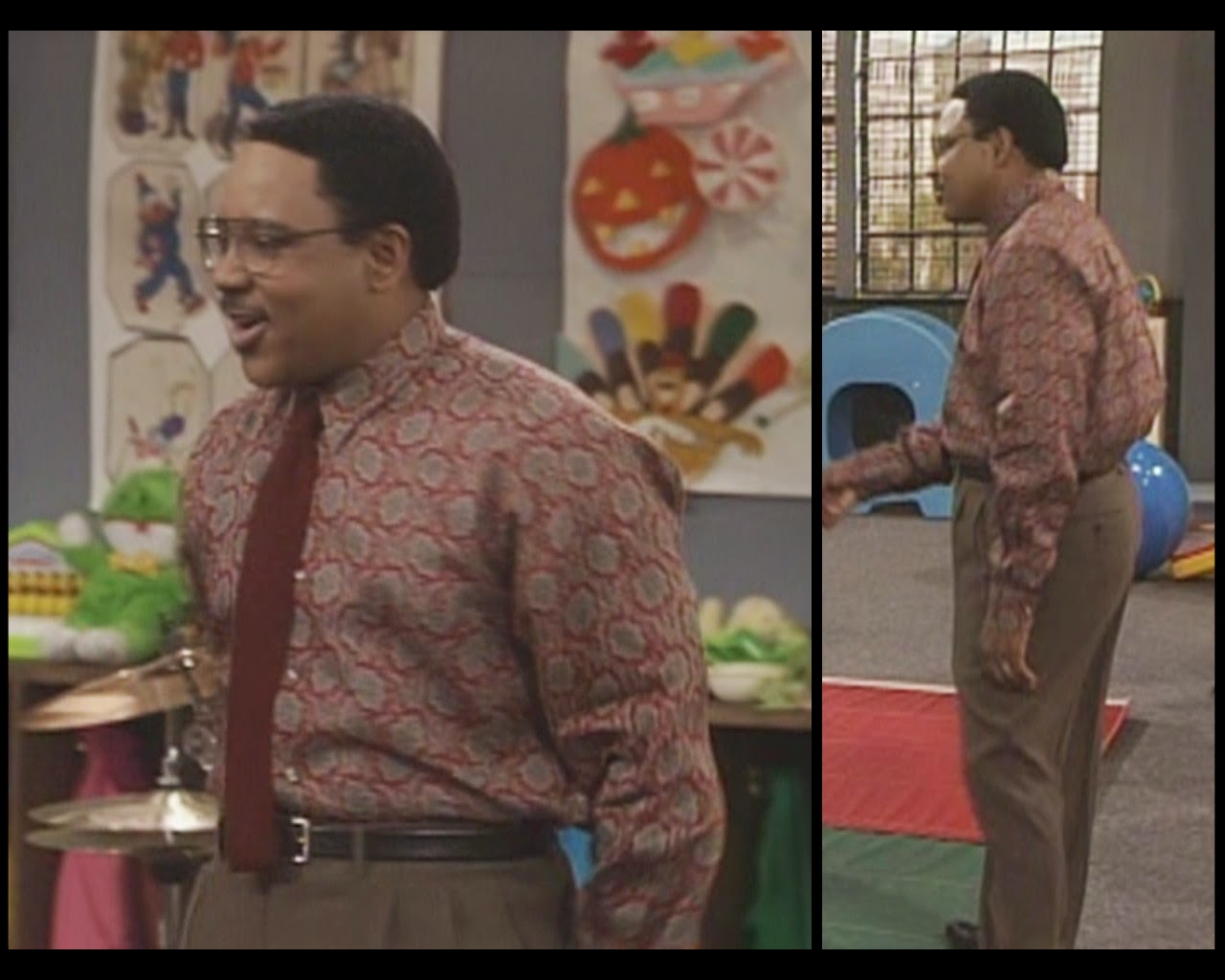 I wonder if his methods actually helped kids learn?

Uncle Wilton remains committed to dressing up. This shirt's pattern is a little too fussy for my tastes, even if he coordinates it well with the tie and pants. It would look good under a jacket or sweater, but it's too much when the whole thing is exposed. 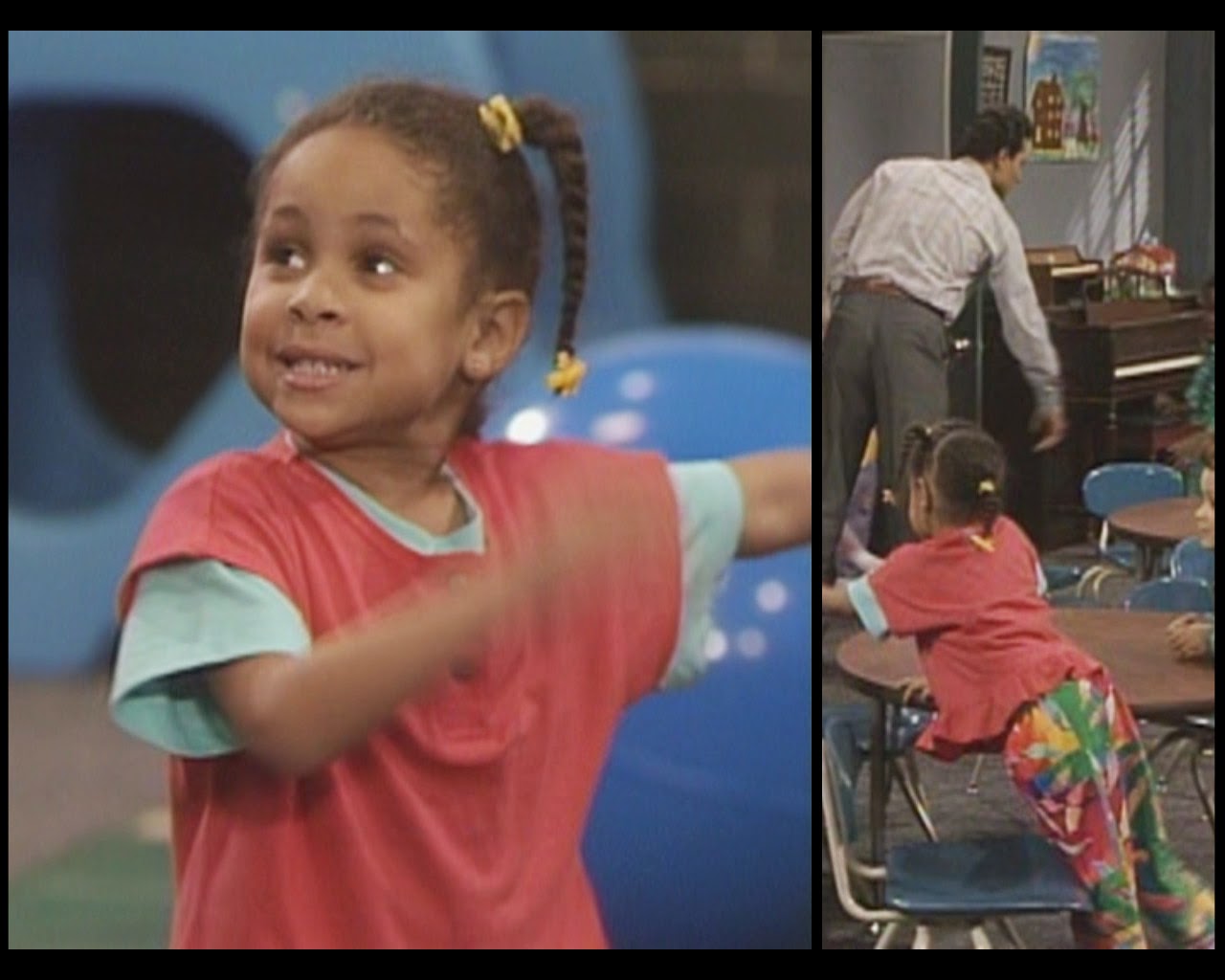 What if Olivia just didn't have a right hand?

Not to be outdone, Olivia rocks an even more outlandish print in her pants. I love her layered shirt combo here. 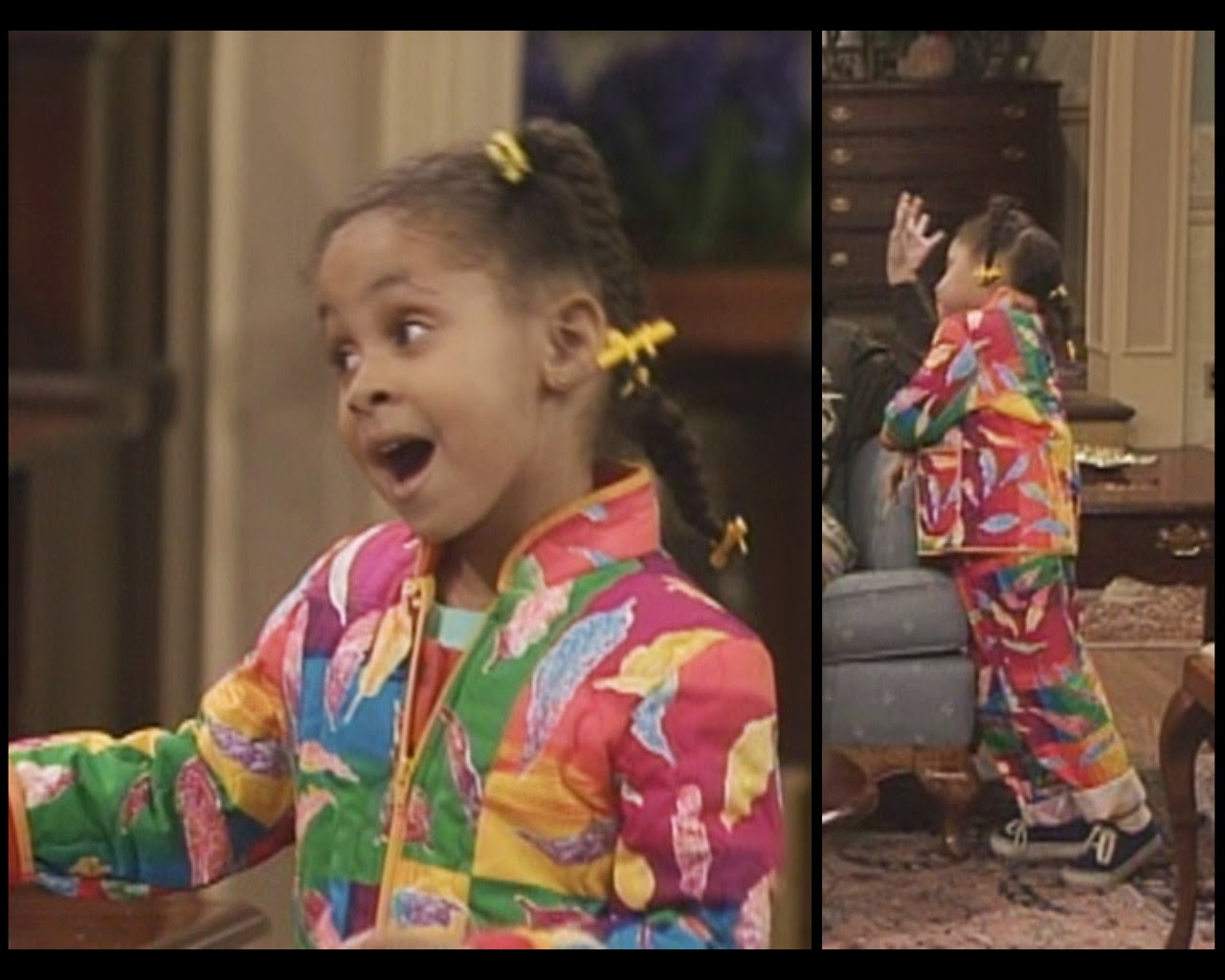 They say "one times one is one" about a million times this week.

Later we learn that her pants come with a matching jacket because everyone has lost their minds. 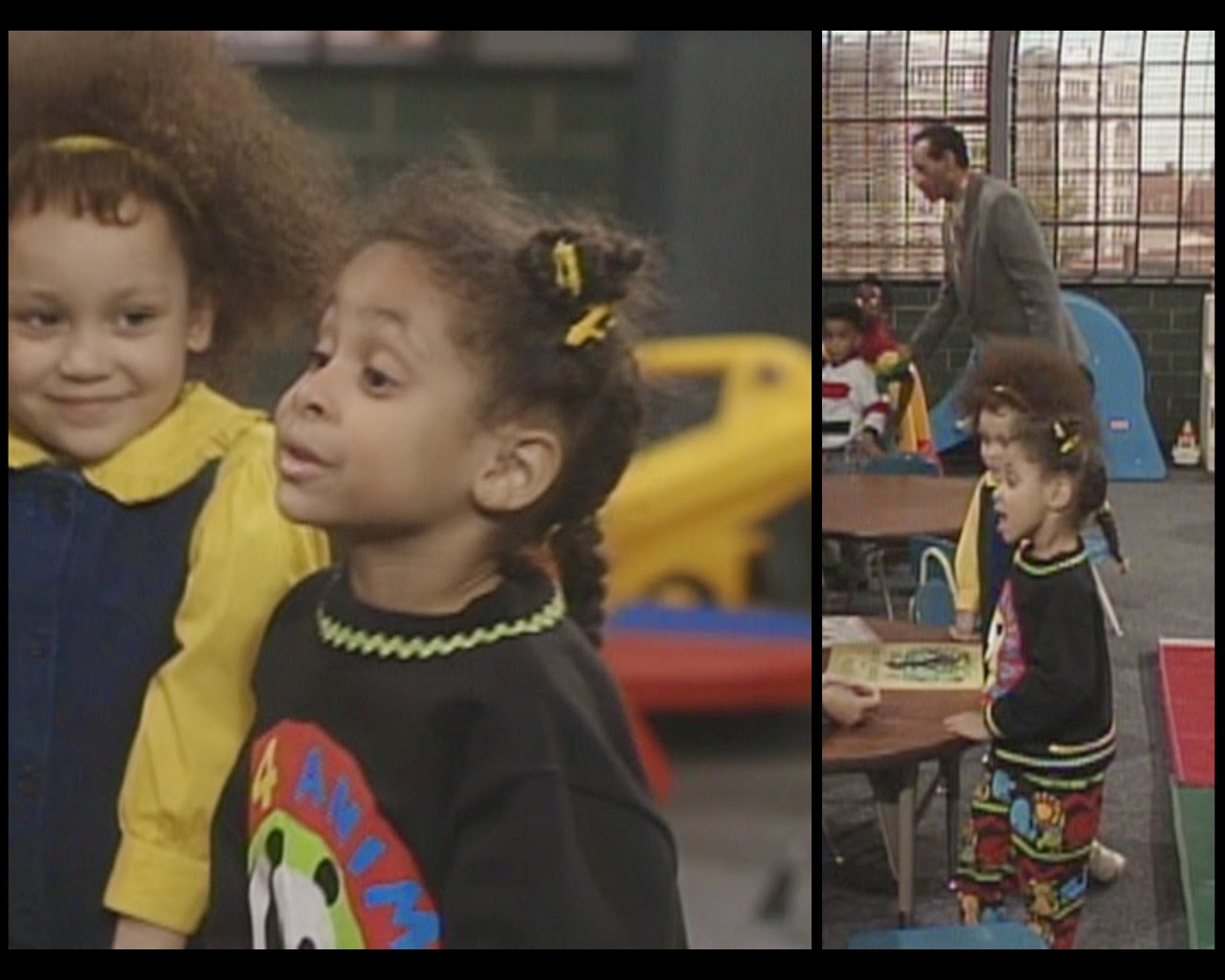 She's not going to show any mercy, it seems: wild prints all day every day. Avert your eyes. 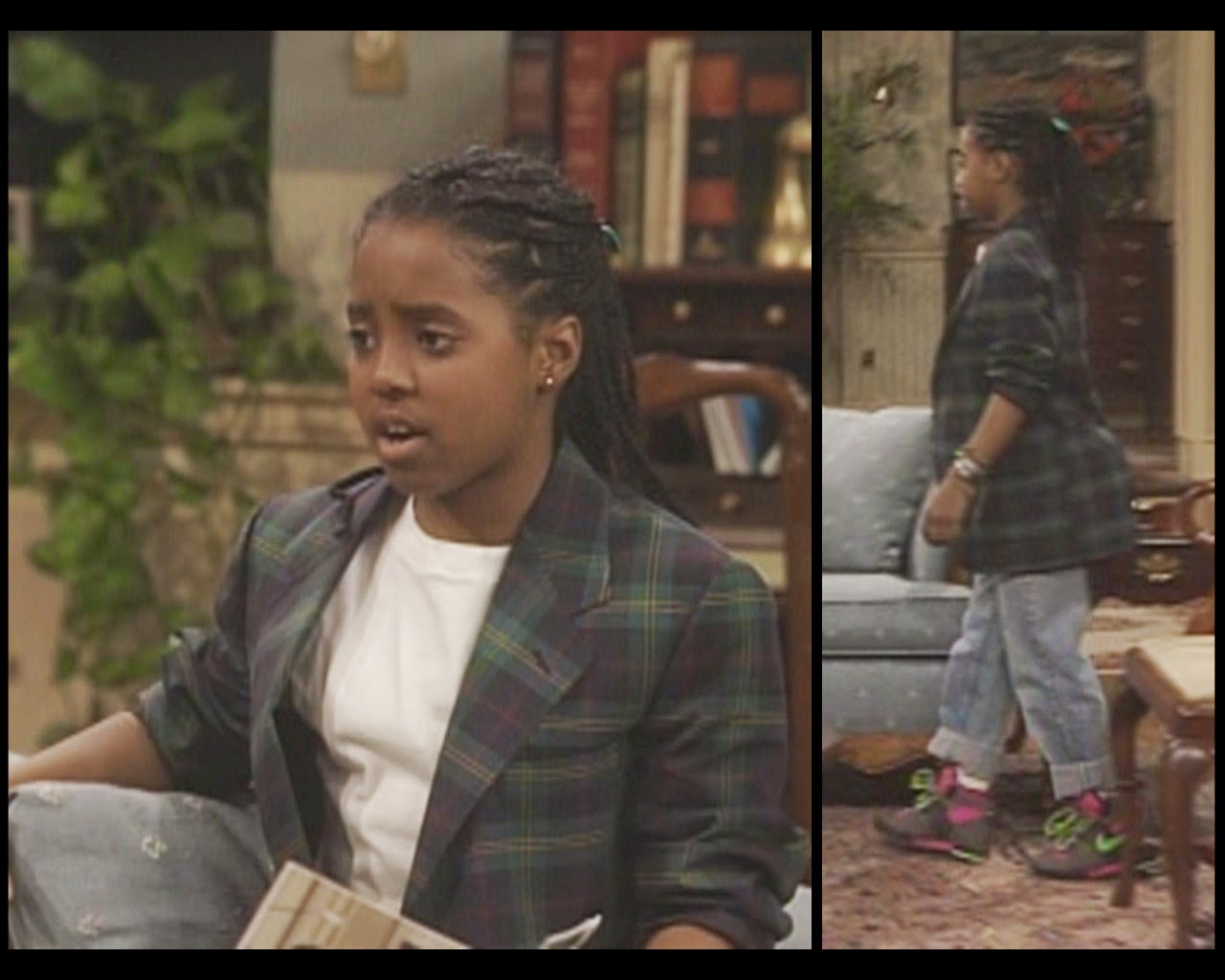 Those are some awful kicks, kid.

Rudy, about to attend a party, is suddenly worried that everyone will make fun of her asymmetrical ears. She oddly expresses zero concern that her peers will question her decision to roll her pants up to mid-calf. It's a choice about which I am personally rather dubious. Smart blazer, though. It's not at its best over a white tee, but it could be worse. 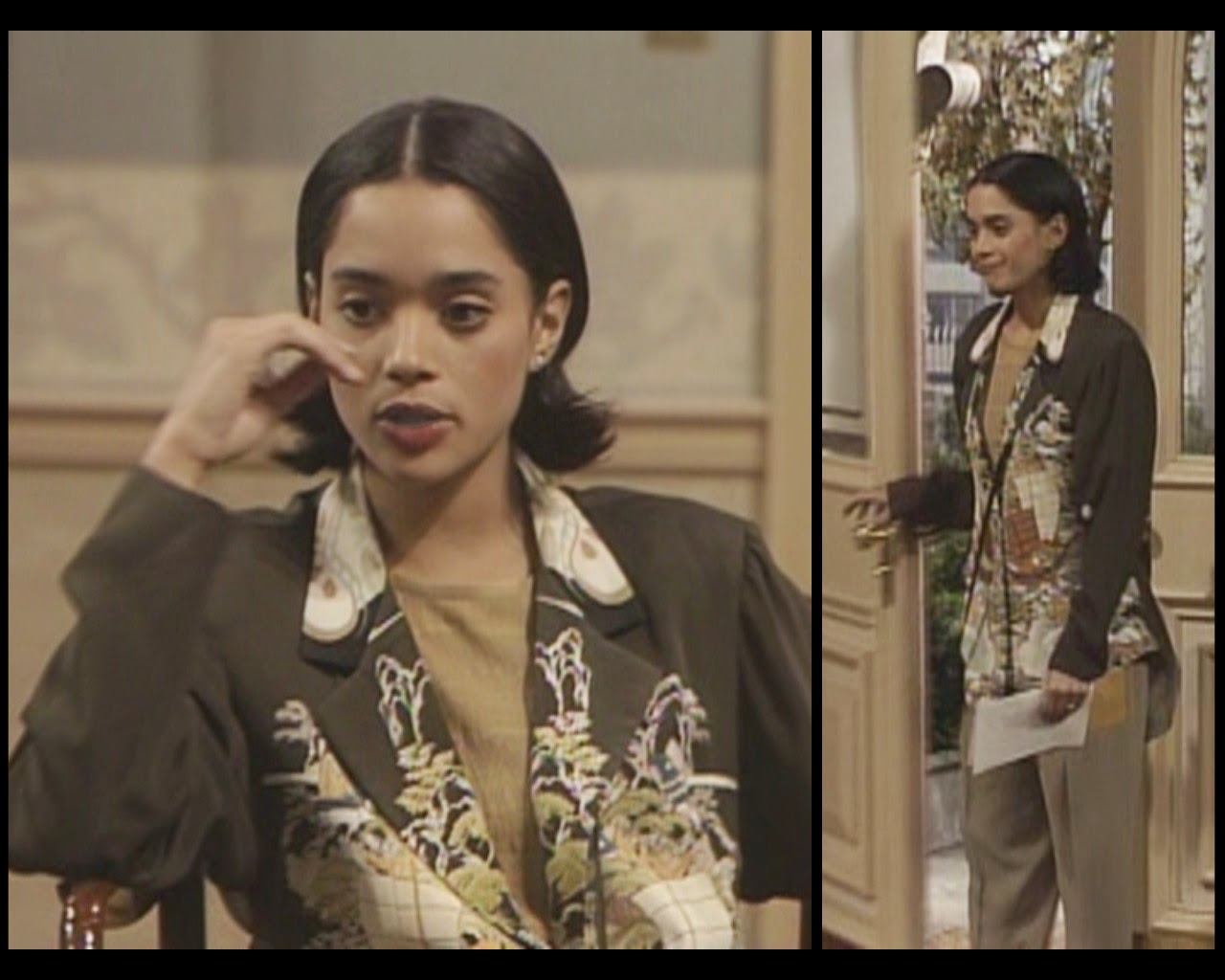 I bet she's the hottest mom at that school.

Denise begins the episode in her episode #6.10 top. It looks better over the subtler pants, in my opinion. The patchwork from last time underplayed what an elegant piece this is. Also, if you were wondering where Madonna got the idea for her slick black hair during the "I'll Remember" period? Possibly from this scene. 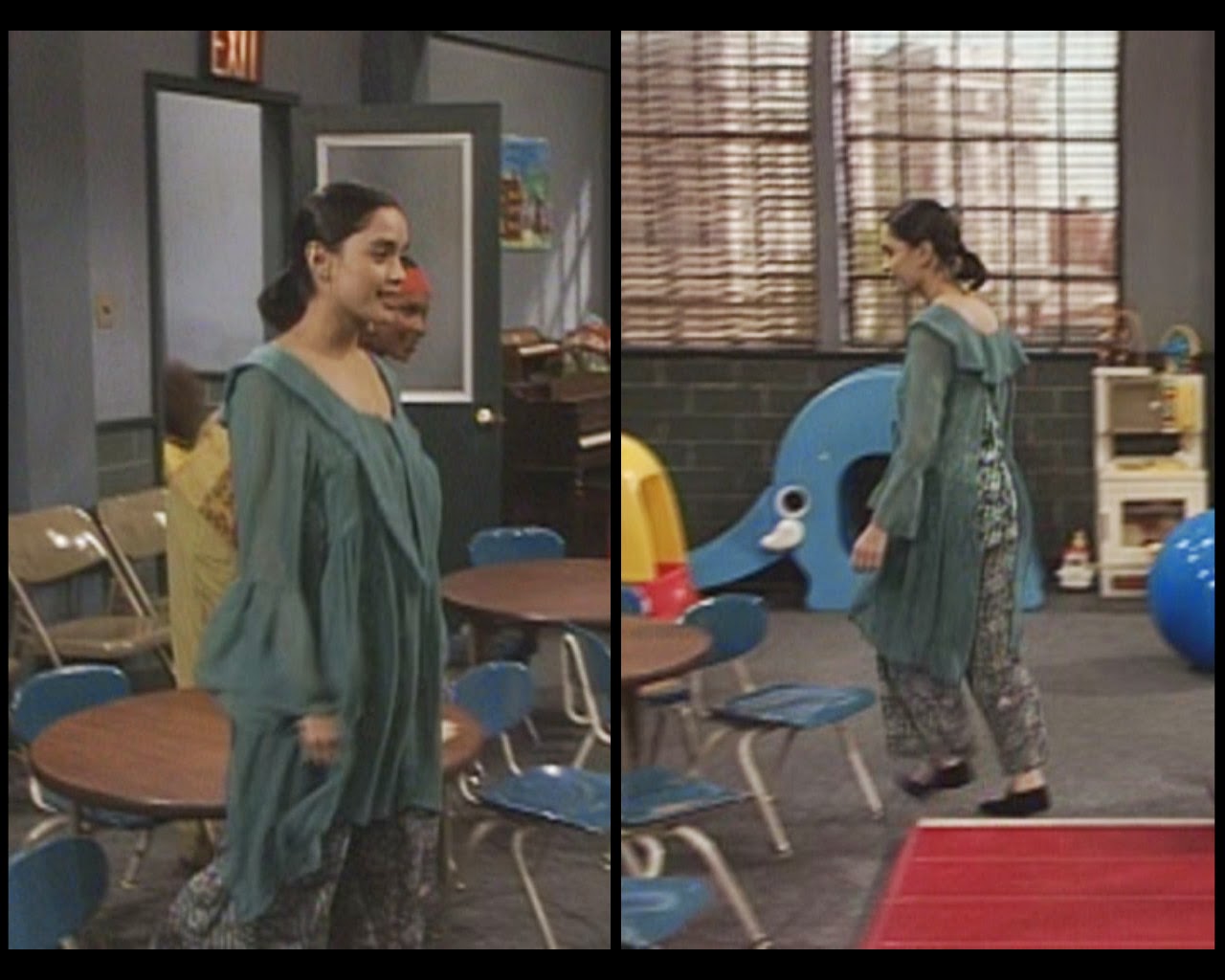 She has possibly outgrown her consistent fashion sense.

Well this is confusing. The base of this creation is a sort of pajama situation. On its own, it wouldn't be an outfit I'd think you could leave the house in. But then she throws on this gauzy smock, and suddenly it's... I mean, I don't know what it is. The split back makes it look like it's on backwards, though I know it's not. Still, the sense I get isn't of chicness, but of wrongness or incompleteness. It hangs open like a hospital gown. Also, the sleeves are too short. Maybe this is a child's dress that she has wrestled onto her body even though it didn't fit? I want to be on her side, but I don't think this experiment worked. I could get behind some of these details on an actual gossamer gown, but this look as it stands isn't for me. 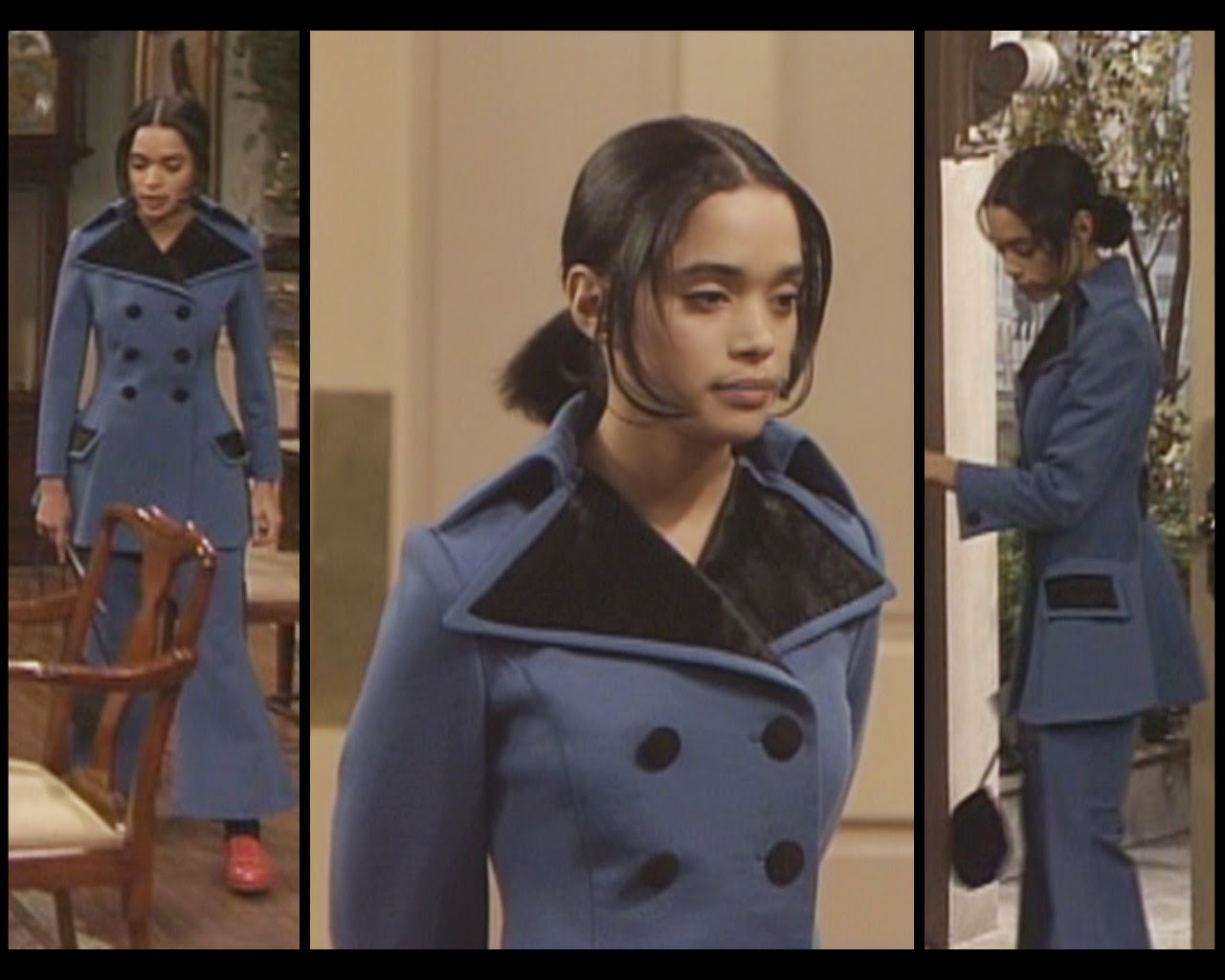 This '70s suit is so patently ridiculous that I'm just going to let it stand. She's like Popeye and Olive Oyl rolled into one, and I can't even tell if it's good or not, so I'm deferring to her judgment. 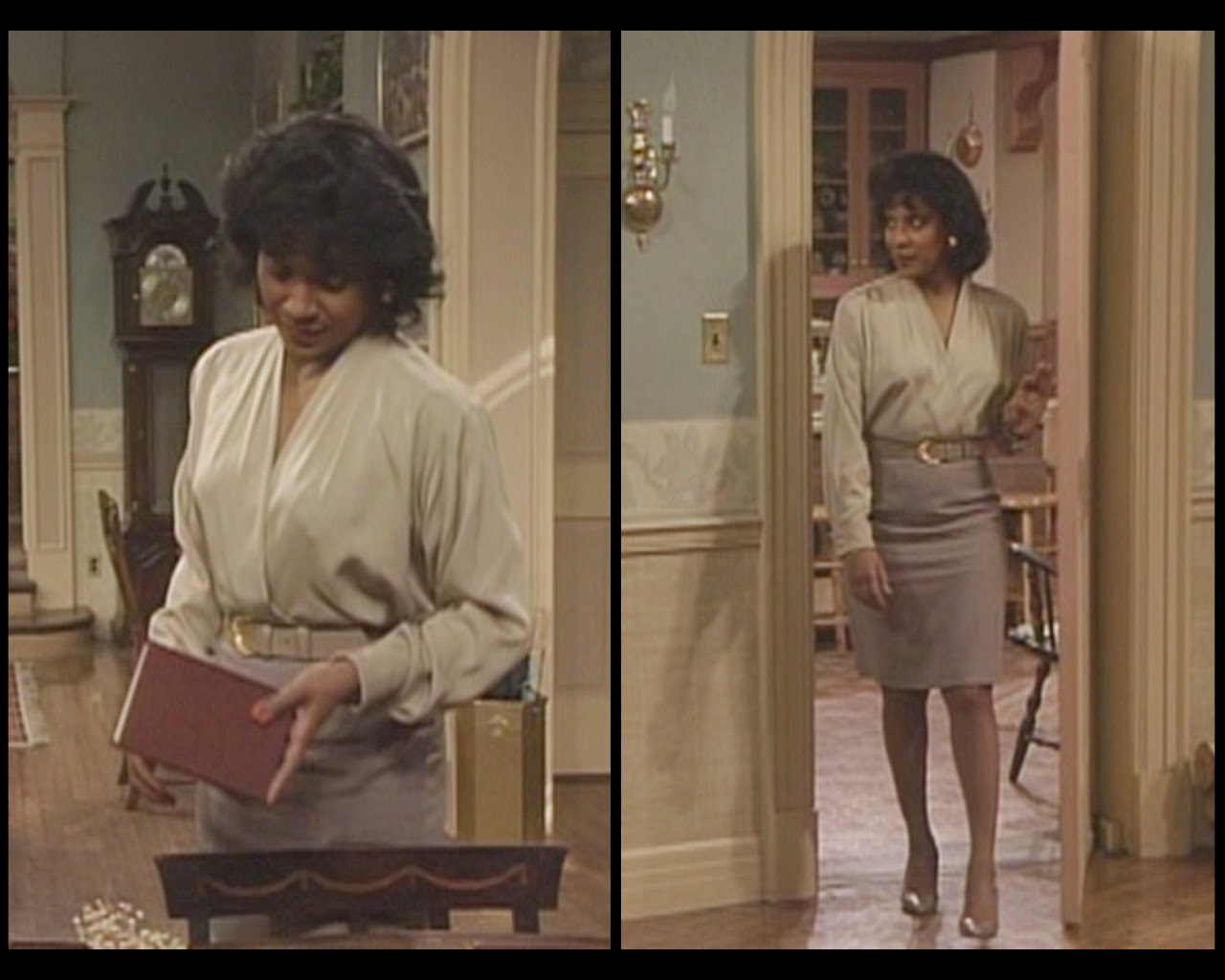 Every once in a while, Clair gets it exactly right. This is one of those times. My favorite part is the way the belt is lighter than the skirt but darker than the blouse, creating almost a gradient effect. The color scheme would be boring if it weren't for the fact that everything is impeccably tailored. I rarely comment on nail polish, but she's serving up a red bordering on coral that adds the exact splash of brightness this look needed. Top-notch work, Mrs. Huxtable. 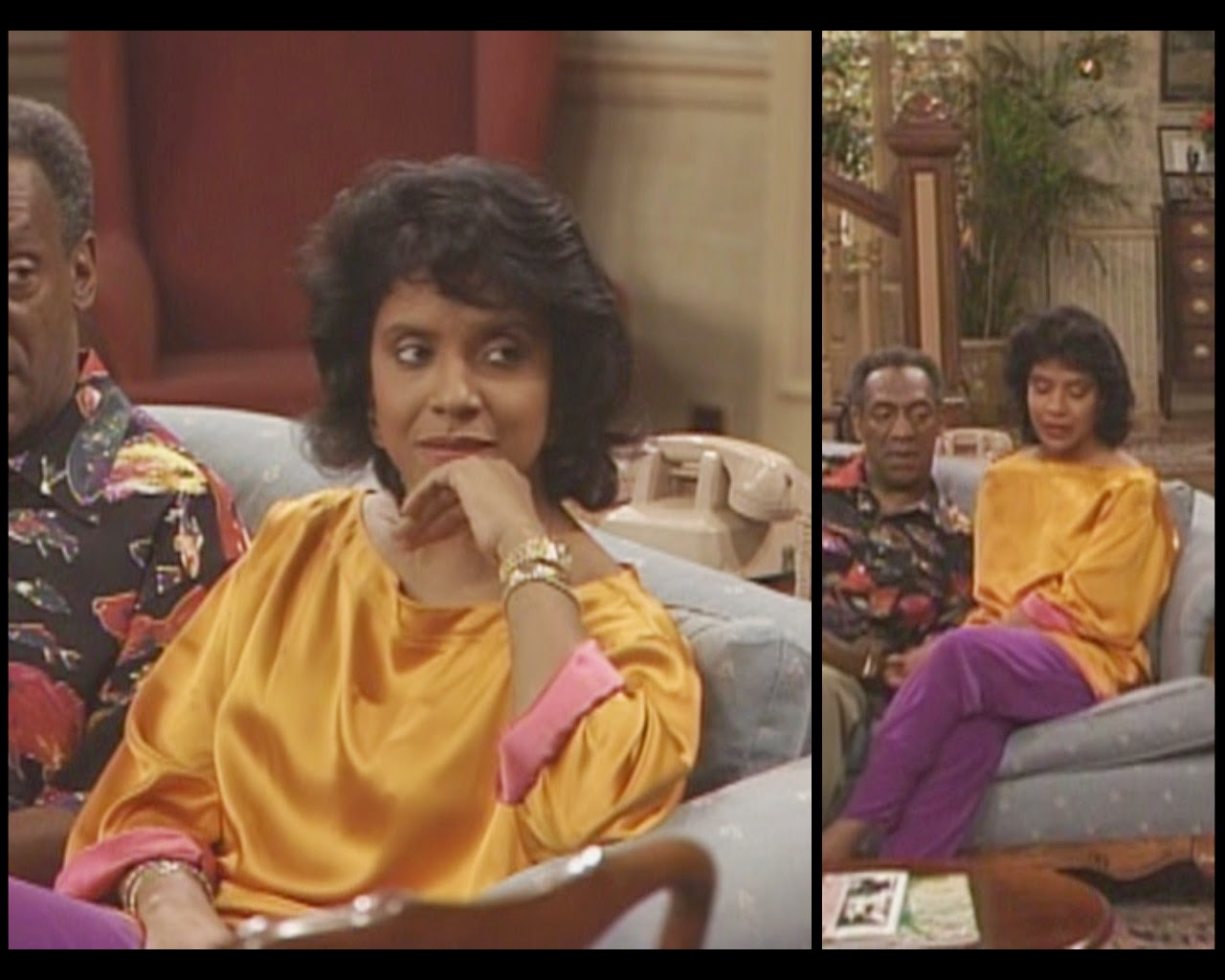 And then it all falls down.

Her second look doesn't quite hold up, though. The satiny fabric with the contrast cuffs should probably be saved and used to make another top. The pants will be tougher to salvage. 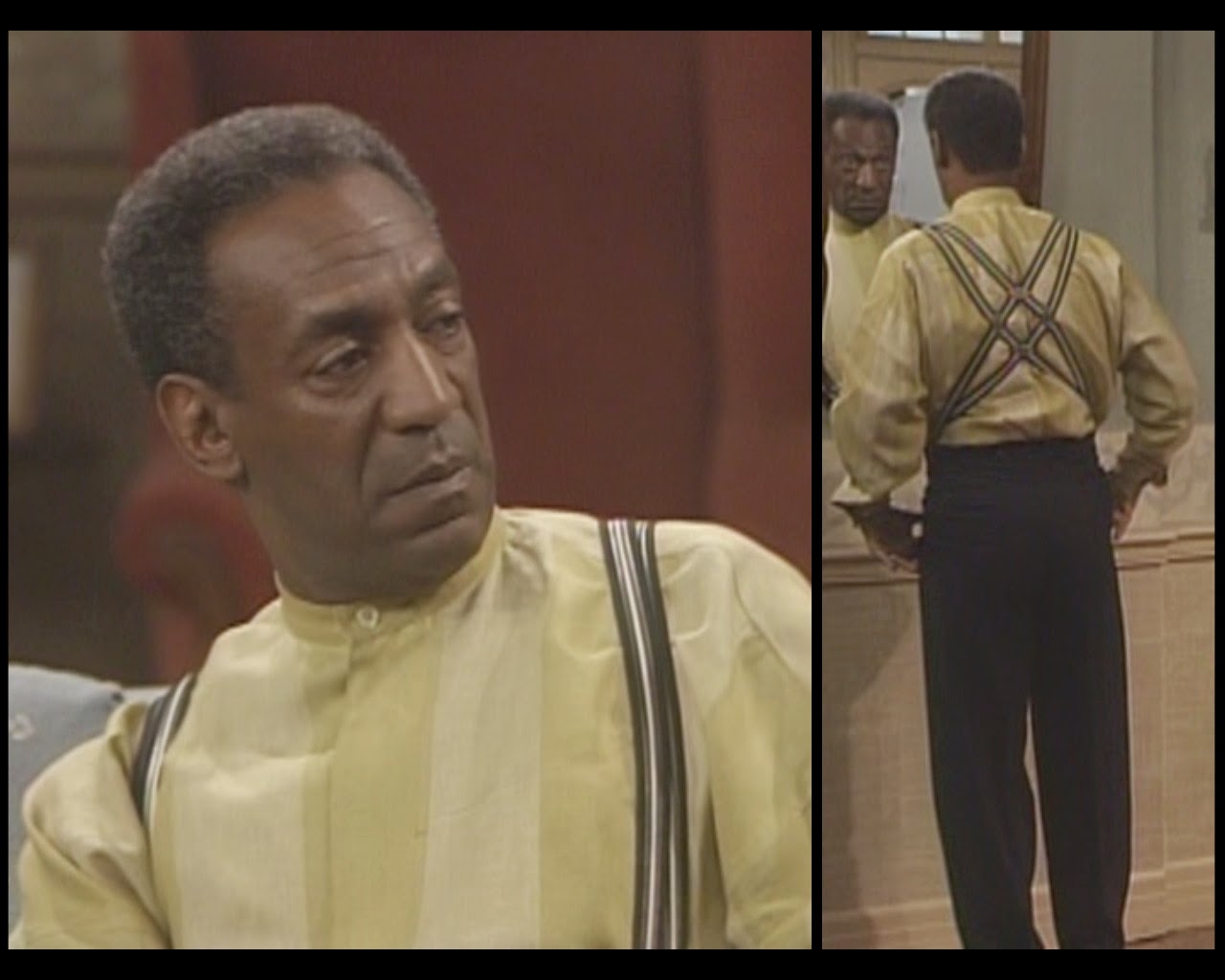 Are those trousers exceptionally heavy?

Real quick: I love the shirt and pants. But we have to jump to the obvious talking point here: what in the name of Cabaret-at-Studio-54 is he holding up his pants with? One pair of suspenders is plenty, two just seems like a circus act. 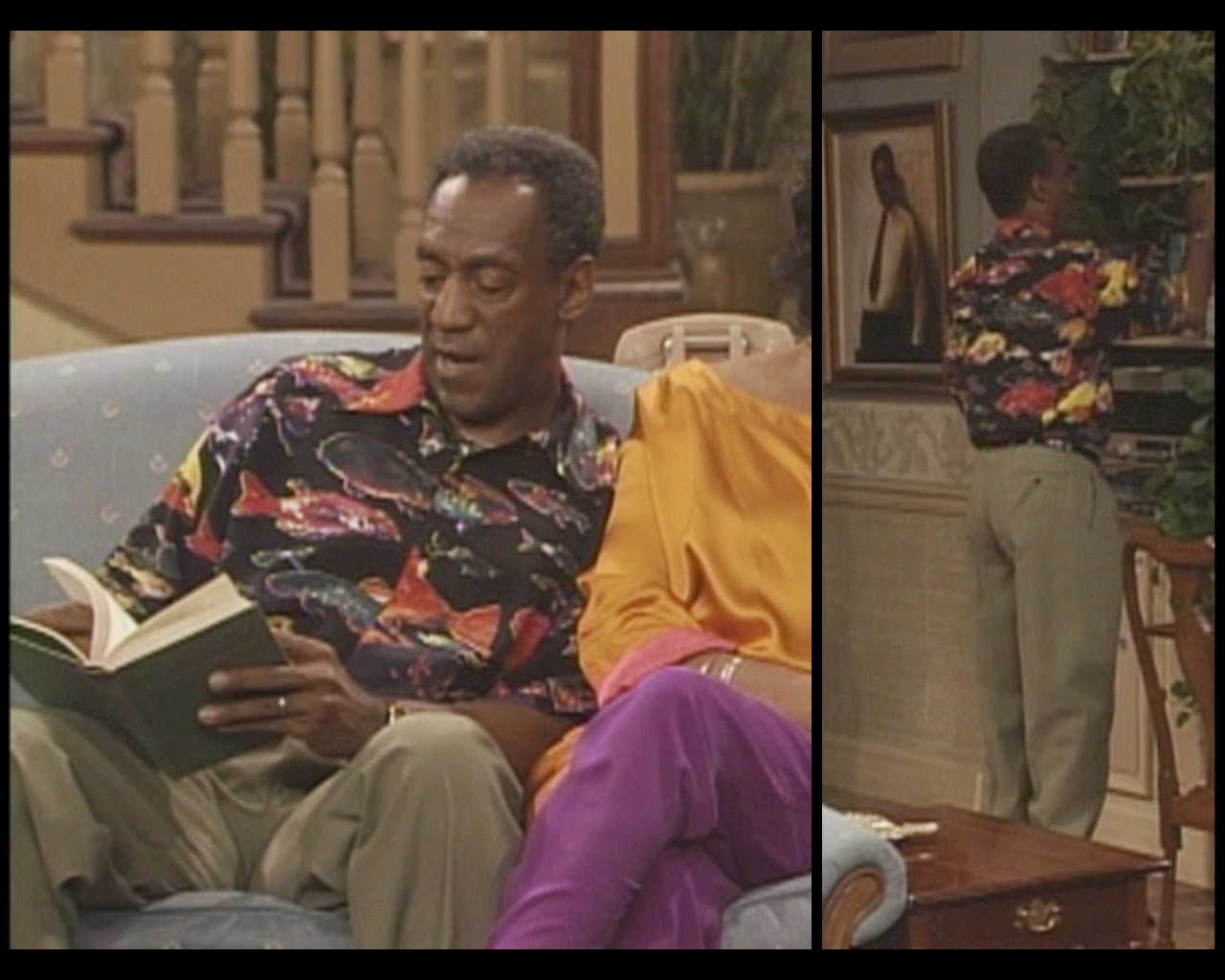 That shirt has a lot of fish on it. It looks like something a person might wear ironically. Get it out of here.

There's only one episode left before the end of this season, at which point I'll have to invest in Season 7 DVDs. If anyone is interested in helping me out with that purchase (and thank you to those of you who have already chipped in), then a donation of even a dollar would be major. If not, no worries. I appreciate your readership. You could also click on an ad or two, or tell your friends about this blog so that I get more page views. It all helps!