Clair is going up against her friend and colleague Bernadette in a land dispute, and is working overtime to hash things out before the case has to go to court. Meanwhile, Jeffrey is handling his recent divorce by reinventing himself with lavish purchases, including insane clothes, a new hairpiece, and a sports car. When he meets Bernadette, however, he's smitten and quickly wishes to unchange the various changes he's made. 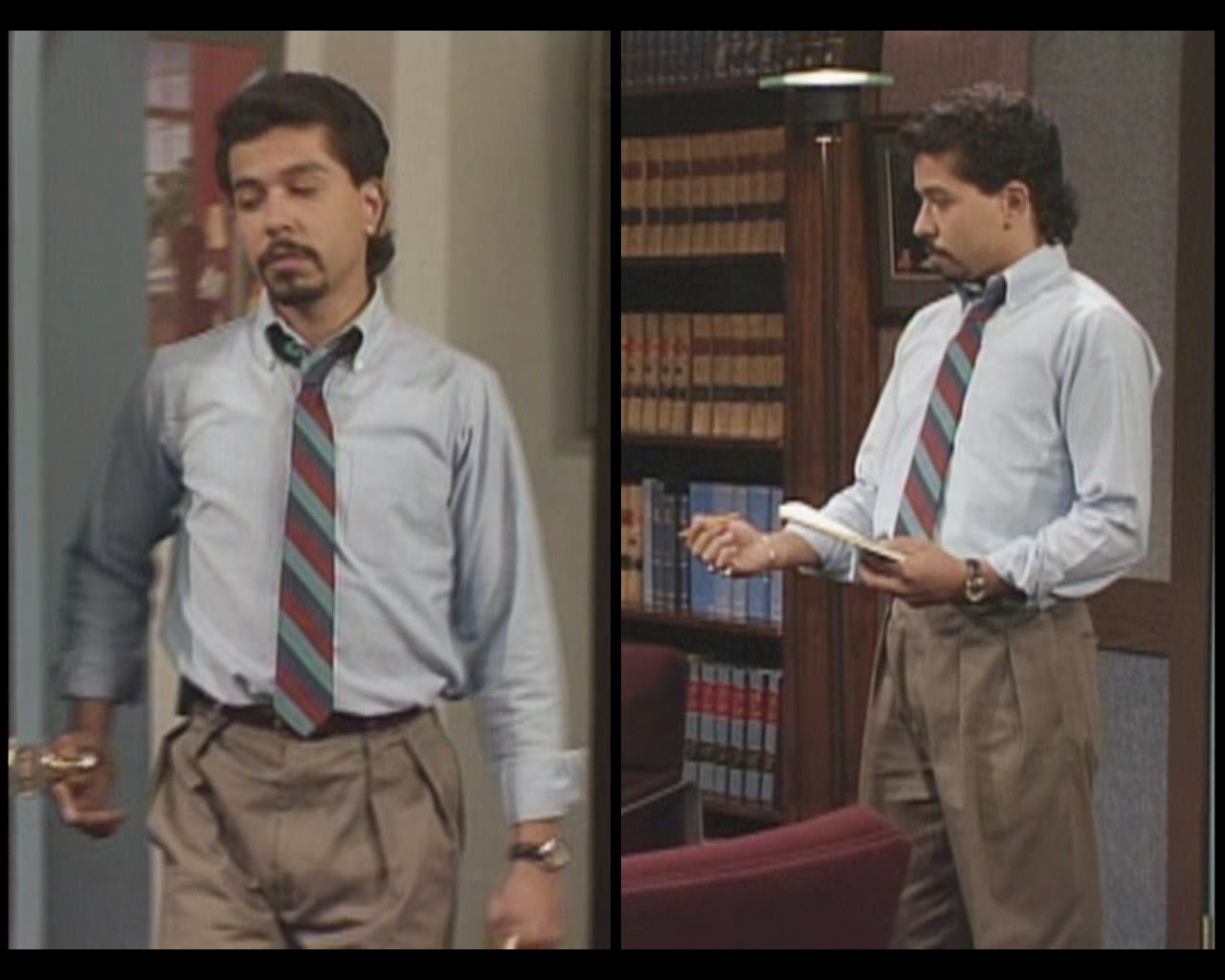 Gorlando Antonio Morales, playing Bernadette's administrative assistant, is credited as "Male Secretary." There are no female secretaries in this episode with whom to confuse him, but apparently it was nonetheless extremely important to highlight his gender. Like, can you believe it? A person with a penis taking a lunch order? As a job?! Will wonders never cease? His pants are so pleated that flat-front trousers cower in their presence. But otherwise this is a spiffy little office getup. I'm giving the tie a so-bad-it's-good pass, though I think I'm just in a positive mood, because it really deserves no reprieve. (Weird twist: Morales did not act again after this, but is credited as an actual assistant on a future episode) 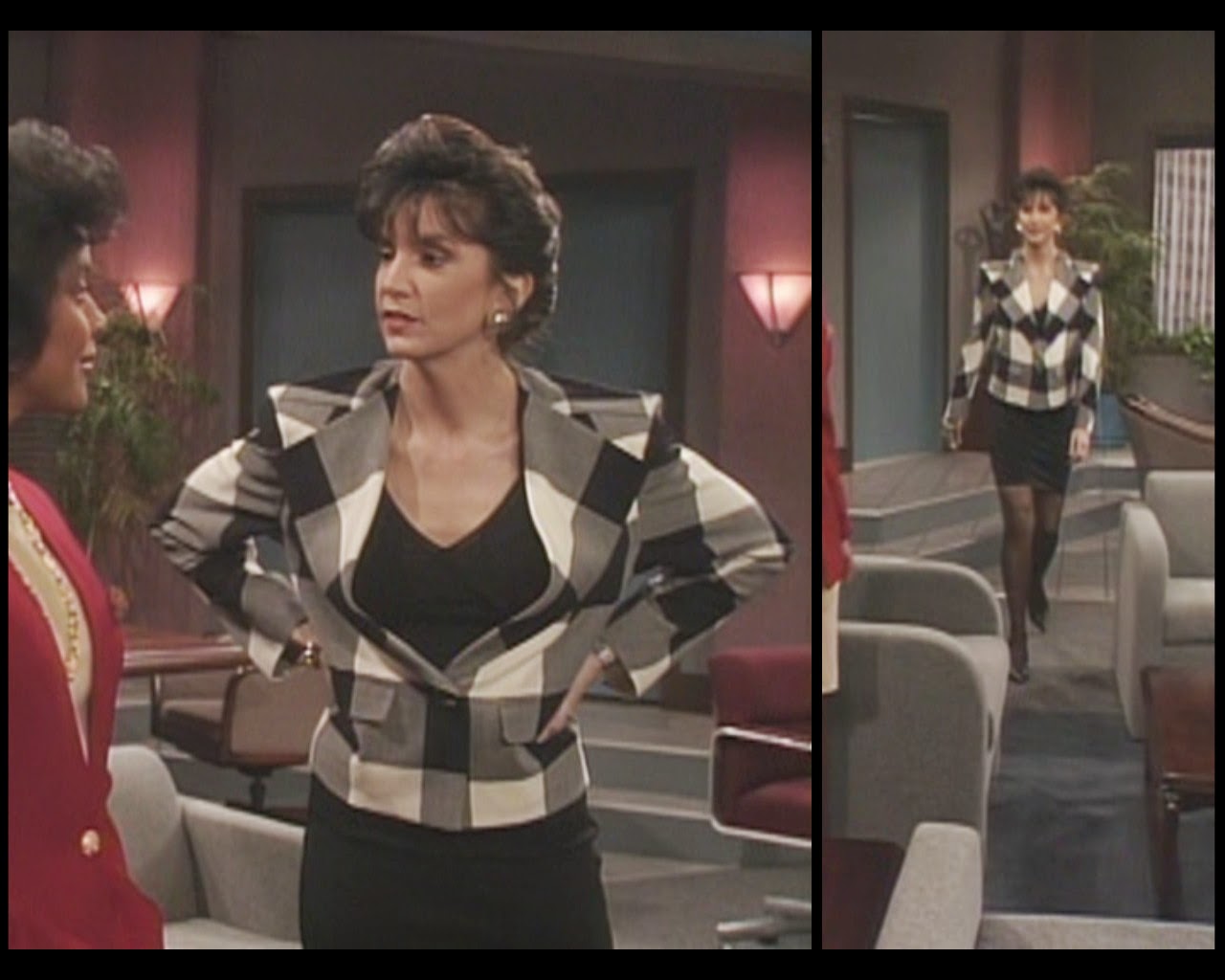 I love her performance in this episode and everything else ever.

Clair's equal in smarts, style, and sass is played by the spectacular Mercedes Ruehl. This look is such a power play. On the one hand, the dress is cut a hair low and hemmed a hair short for the office, and especially when those dark tights are added, it suggests a late party more than a morning meeting. It's the weekend, but still. Unless she's trying to seduce the secretary (he is male, after all), one can only conclude that she's flaunting her wiles to intimidate Clair. The jacket, on the other hand, is a bold-patterned, wide-cut masterpiece, using the shoulders and lapels to extend her body the way a cornered cat might arch its back to scare predators. She's ready for battle. 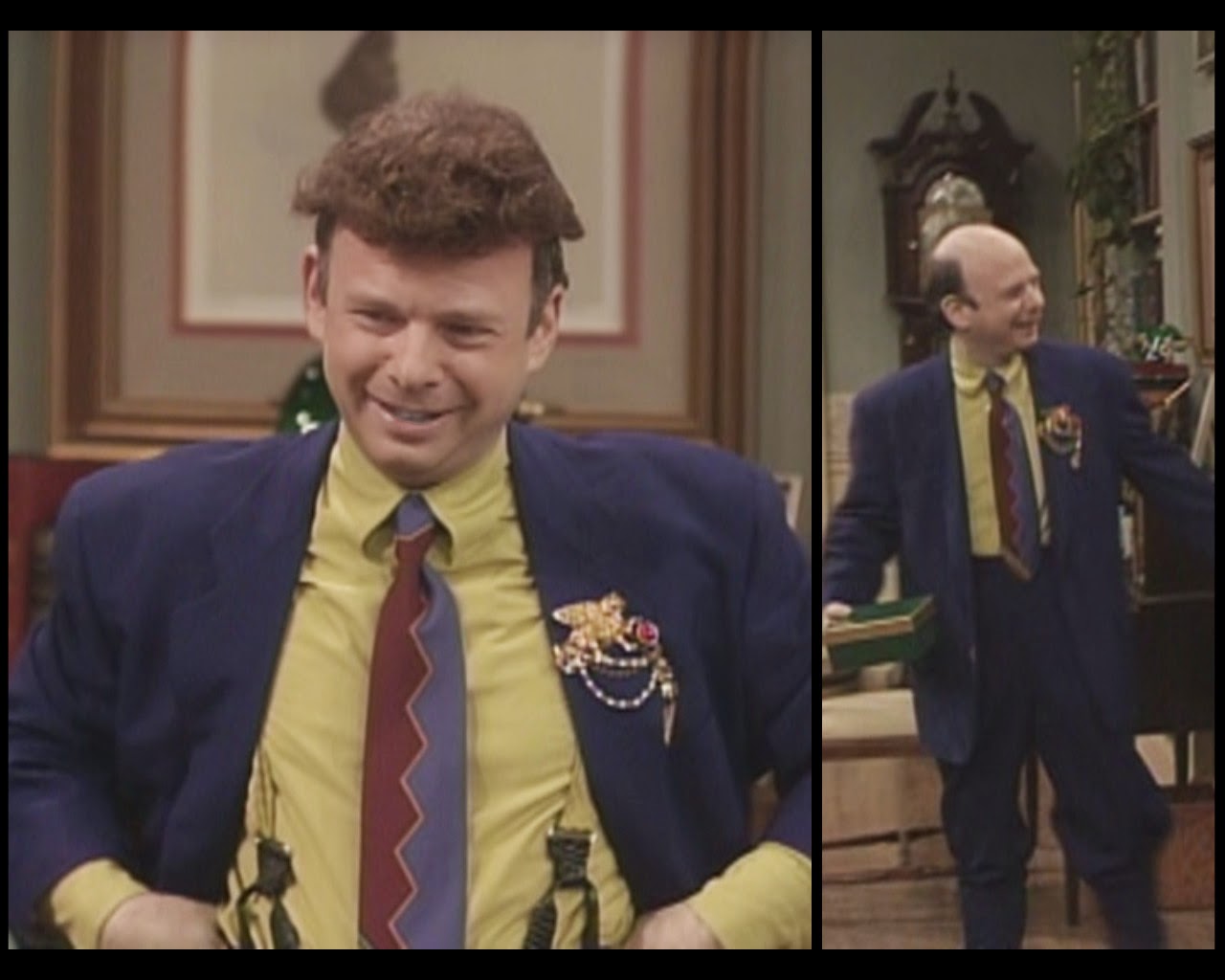 Something something land war in Asia.

I'm still trying to wrap my head around the fact that Wallace Shawn made so many guest appearances on this show. Here he is in his newly-selected threads. It's tough to look at this outfit as a fashion artifact since it's so clearly being deployed for laughs. In particular, the pants that are loose to the knee and then taper violently at the shins speak to the disparity between his age and the target audience for these garments. Trends in trouser tailoring are typically both embraced by a segment of the younger generation and mocked by most everyone else (think boot-cut, drop-crotch, all the way back to the zoot suits of which this is reminiscent). The palette isn't terrible, though the tie is off. But he's matched his suspenders to his shirt with an accuracy rarely attained by characters in this universe, so I'll give credit for that. But yeah: these are joke clothes. 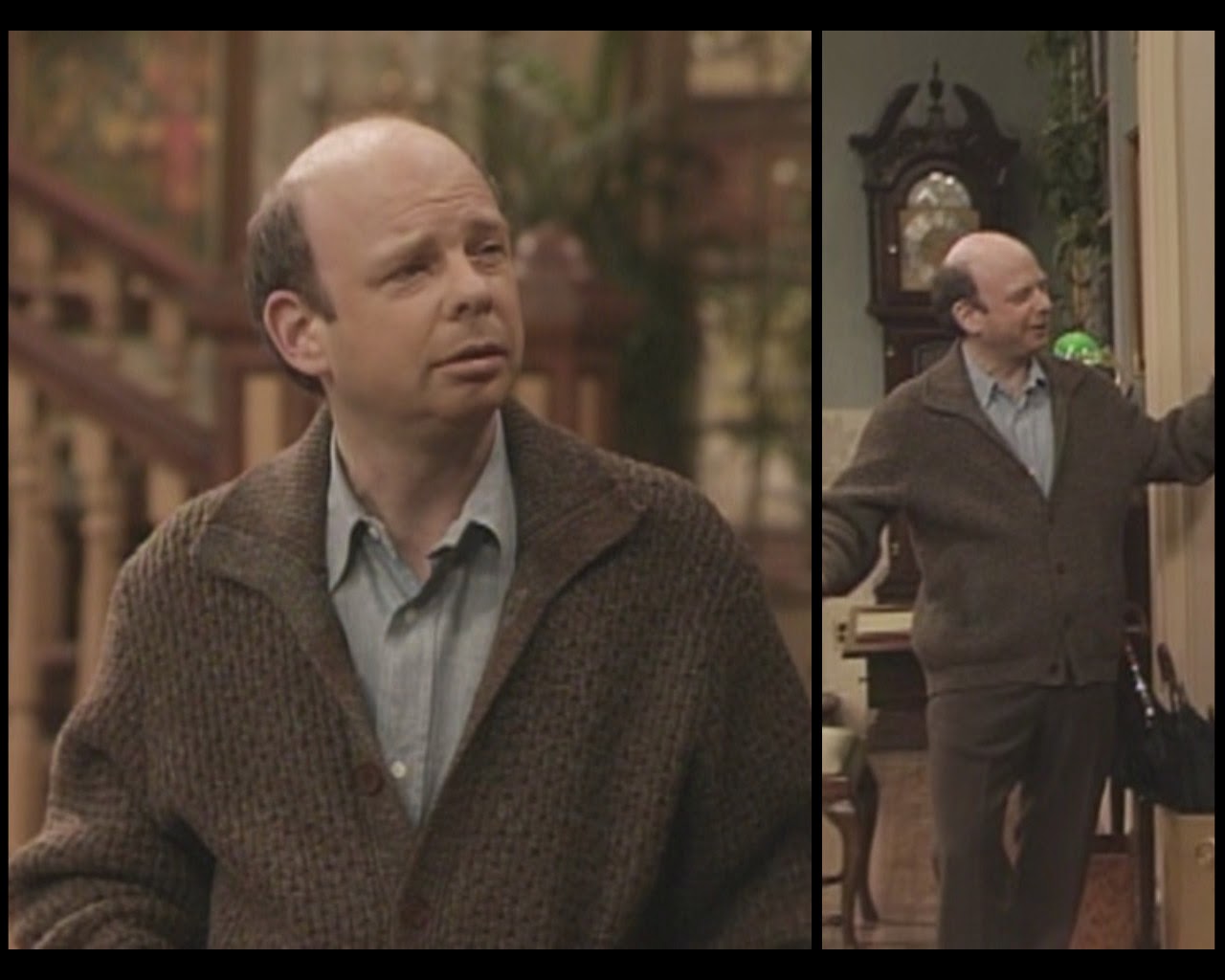 Look, Jeff is no sex symbol. When you're trying to flirt with someone, play to your strengths. This is not a man that will inspire immediate lust. But, like a droopy pug, he is a man that some people will want to cuddle up with on a lonely night. To maximize that appeal, he goes with dull colors and a big, warm, inviting sweater. I'd hesitate to agree to get naked with this man, but I'd take in a movie and keep an open mind. At least he's being honest here, you know? That clown in the cobalt suit didn't stand a chance. 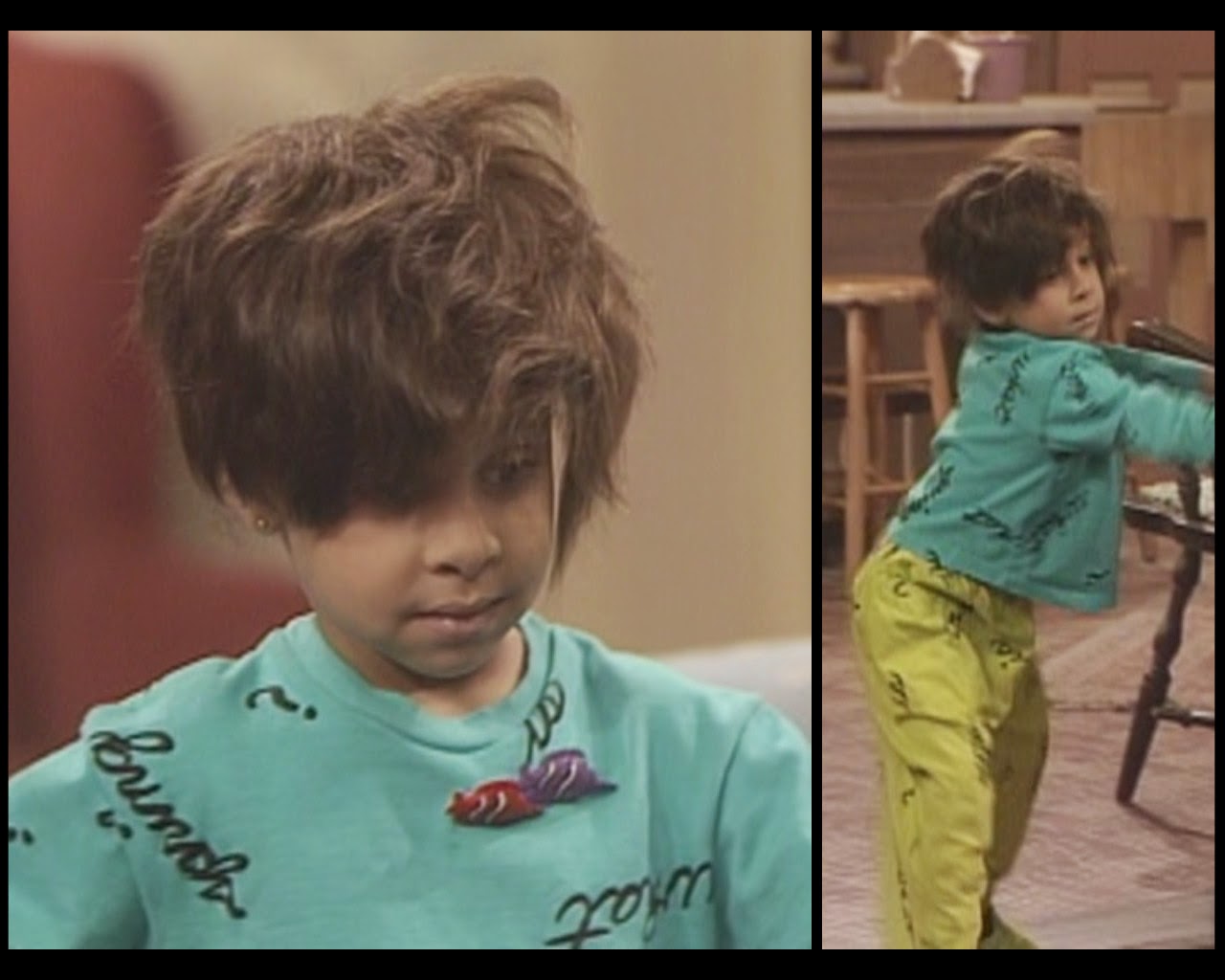 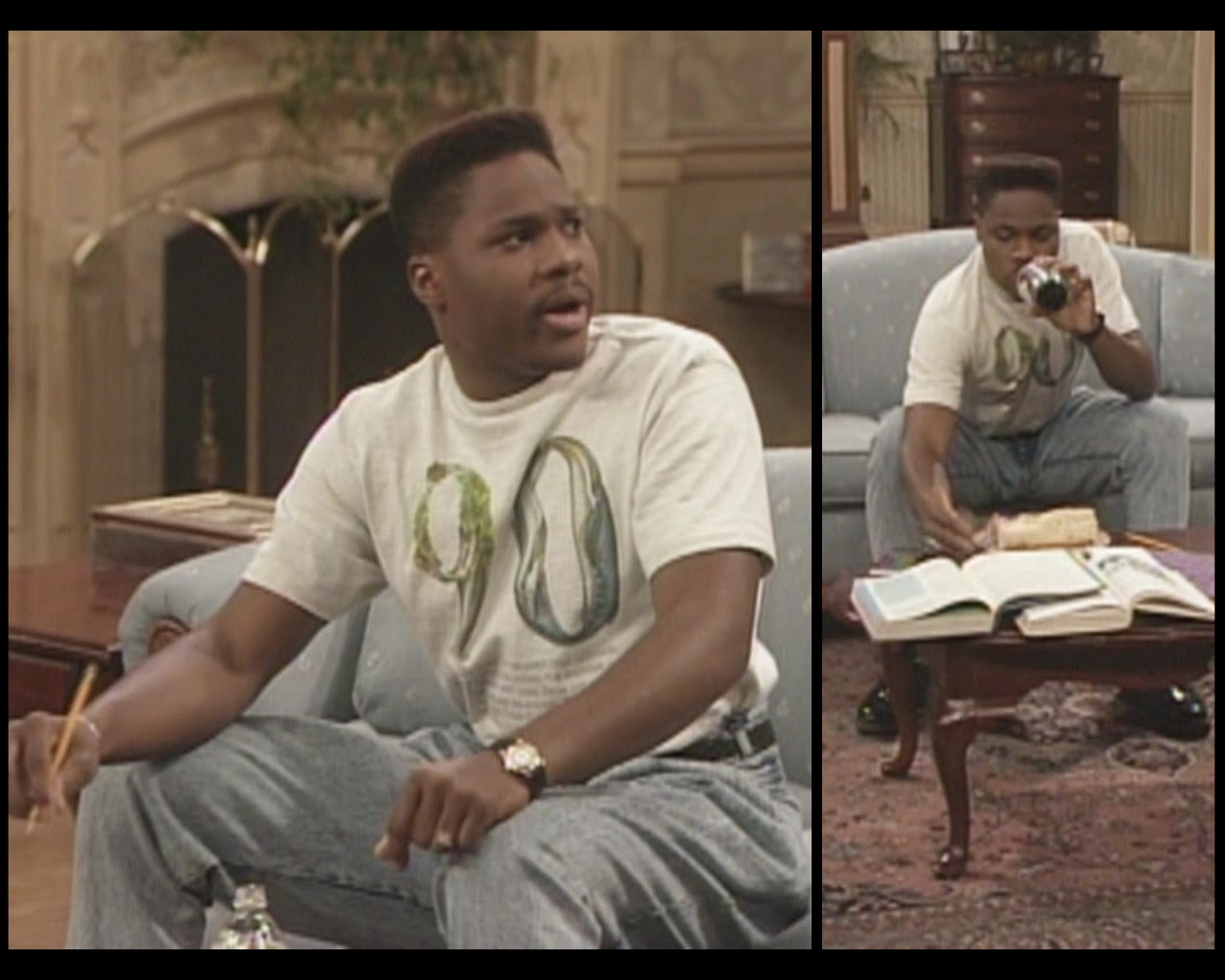 It's 1990, so Theo wears a shirt with a 90 on it. I mean, that has to be why that number is there, right? I dunno, this isn't terrible (other than the tucked-in shirt), but it's not making me any more likely to give him the benefit of the doubt in the future. 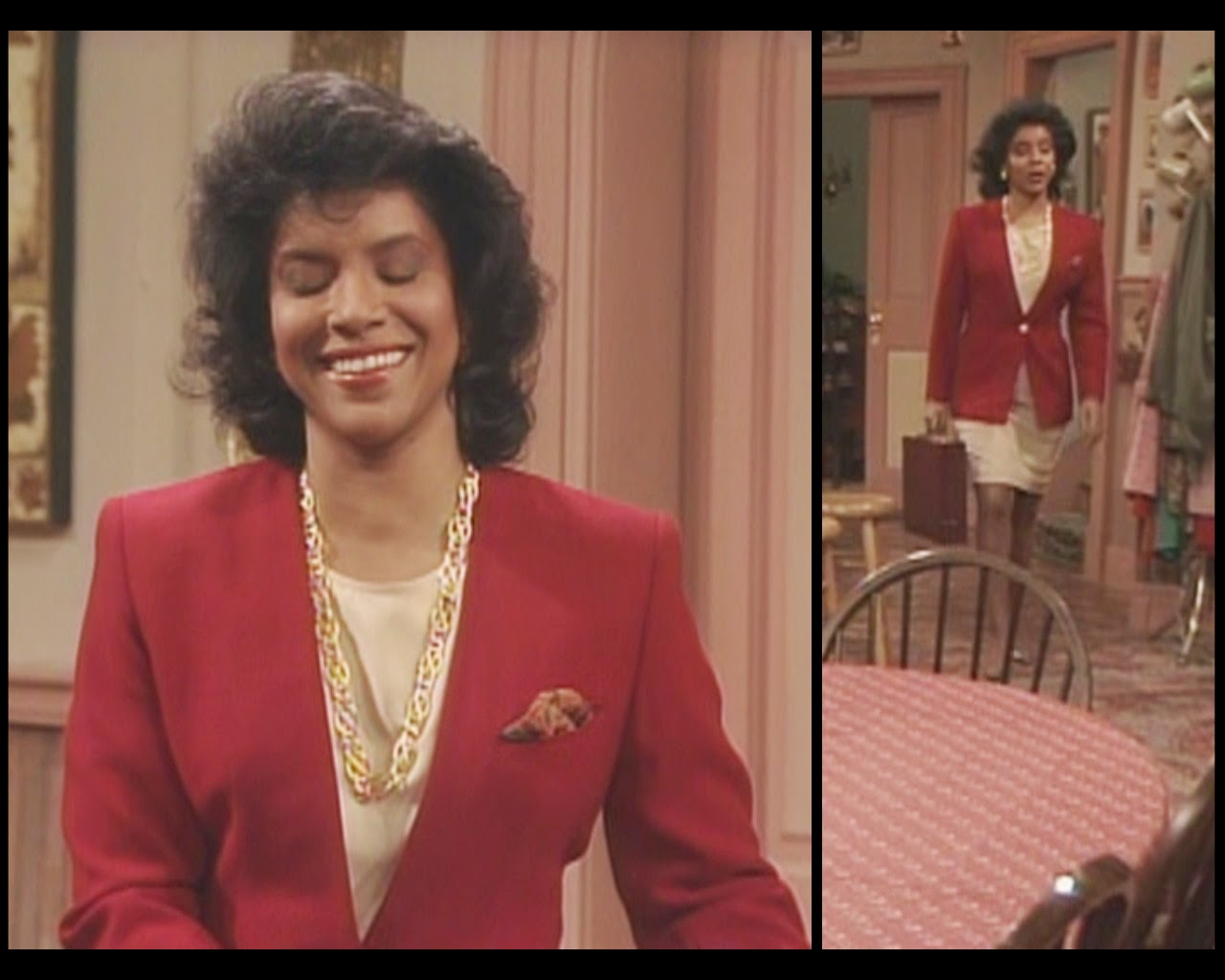 All I need is the Clair that I breathe.

I'm skipping Denise's appearance at the beginning of the episode because she's in pajamas. While Clair owns several red coats, this appears to be a new one. Her episode #4.23 coat was similar, but had a matching red button instead of a gold one (and didn't appear to be cut in such a way that it could be closed anyhow). Her #5.3 blazer had lapels; this one does not. Ditto #5.14. So this is a new creation, and it's another winner. Of course she's buying more red: it looks phenomenal on her. And the cream dress underneath is equally triumphant. By employing simple construction and flat tones, she makes her outfit iconic. It's not plain: it's high-impact. I'd even suggest losing the pocket square, or at least swapping it out for something plain. 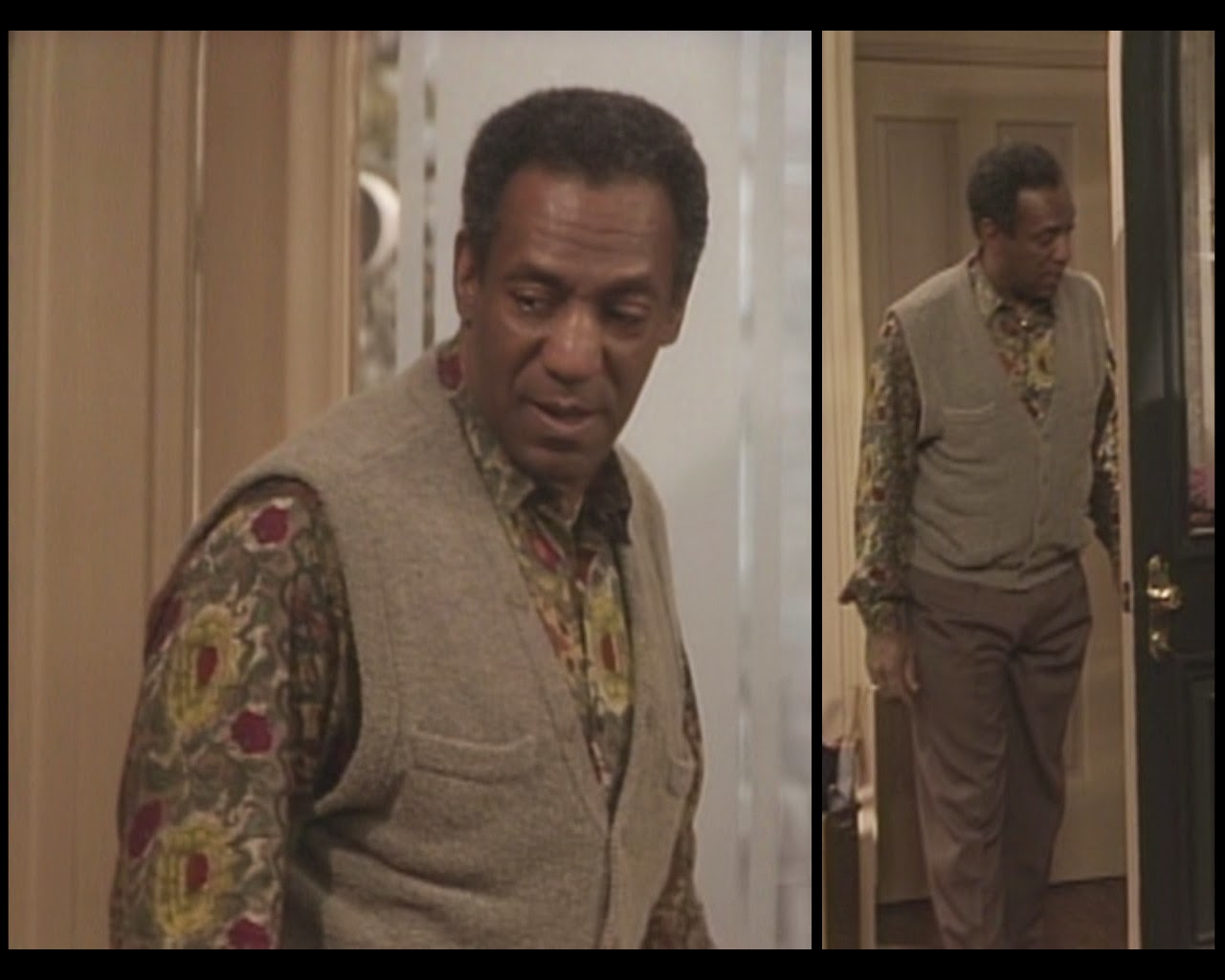 This is the ugliest shirt Cliff has ever worn. It's a good thing the rest of his look is all beige and taupe, because my eyes aren't physically prepared for more than this.

As we near the end of the season, I'm going to throw the donation link up here once more. I need to order the Season 7 and 8 DVDs so I can keep this little blog rolling, and it'd be great to get a little help in that department. If you enjoy my writing and read regularly, please consider donating a few cents or even a whole dollar by clicking the PayPal button below. Think of it like a tip jar. Every little bit helps! Thanks, all.