Season 6, Episode 23: Off to See the Wretched

People tend to remember this episode, or at least the final moments. Vanessa, eager to see a band called The Wretched in concert, has conspired with her friends to fool their parents with a series of misleading truths. Though they will indeed be staying at Susan's house after the show, they never mention that Susan's parents will be away, or that they will be trekking to and from a venue in Baltimore. Of course, things get ugly all around: their car and then their concert tickets get stolen, while a paint factory fire makes Susan's grandmother an unlikely TV interviewee, unraveling the charade. The story ends with Clair tearing into Vanessa in a way that is at once funny and frightening.

Interesting factoid: Theo does not appear in front of the camera, but Malcolm-Jamal Warner still assisted with the production by making his debut as assistant director of this episode. 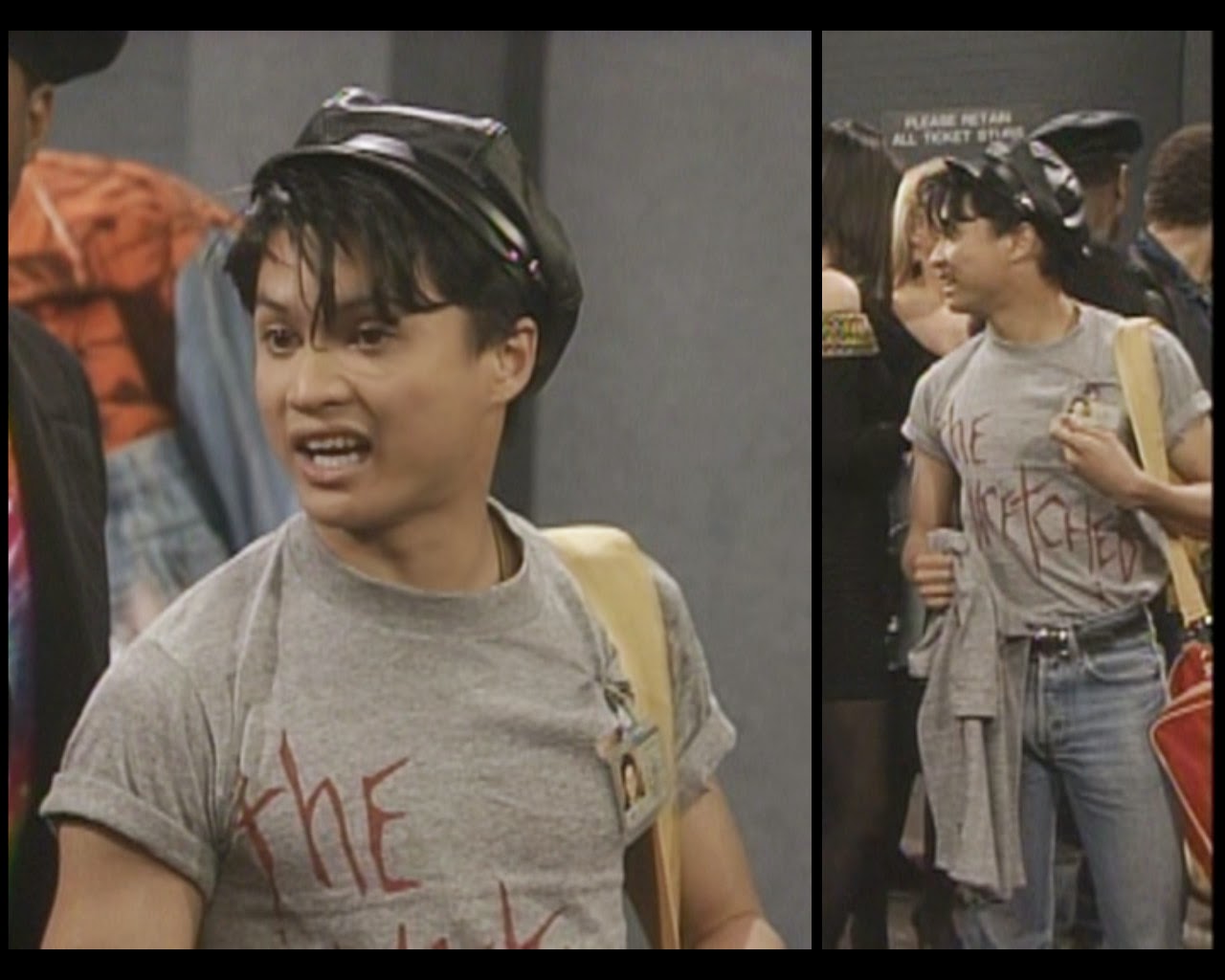 Preparation for his illustrious turn as 'n Cream.

Alec Mapa appears briefly in what I assume is the first properly-tailored t-shirt this show has ever seen. Previous evidence has suggested that, as of 1990, we did not have the technology to make a t-shirt small enough to fit Alec Mapa properly. Everything here except for the cap is good. I can't imagine how a post-Village People world could see that hat as the symbol of a heterosexual punk rock fan. I'd say that the show was trying to display the band's subversiveness by having a queer leather fetishist in the audience, but the generally conservative leanings of the narrative imply that this is an unintentional depiction of homosexuality. 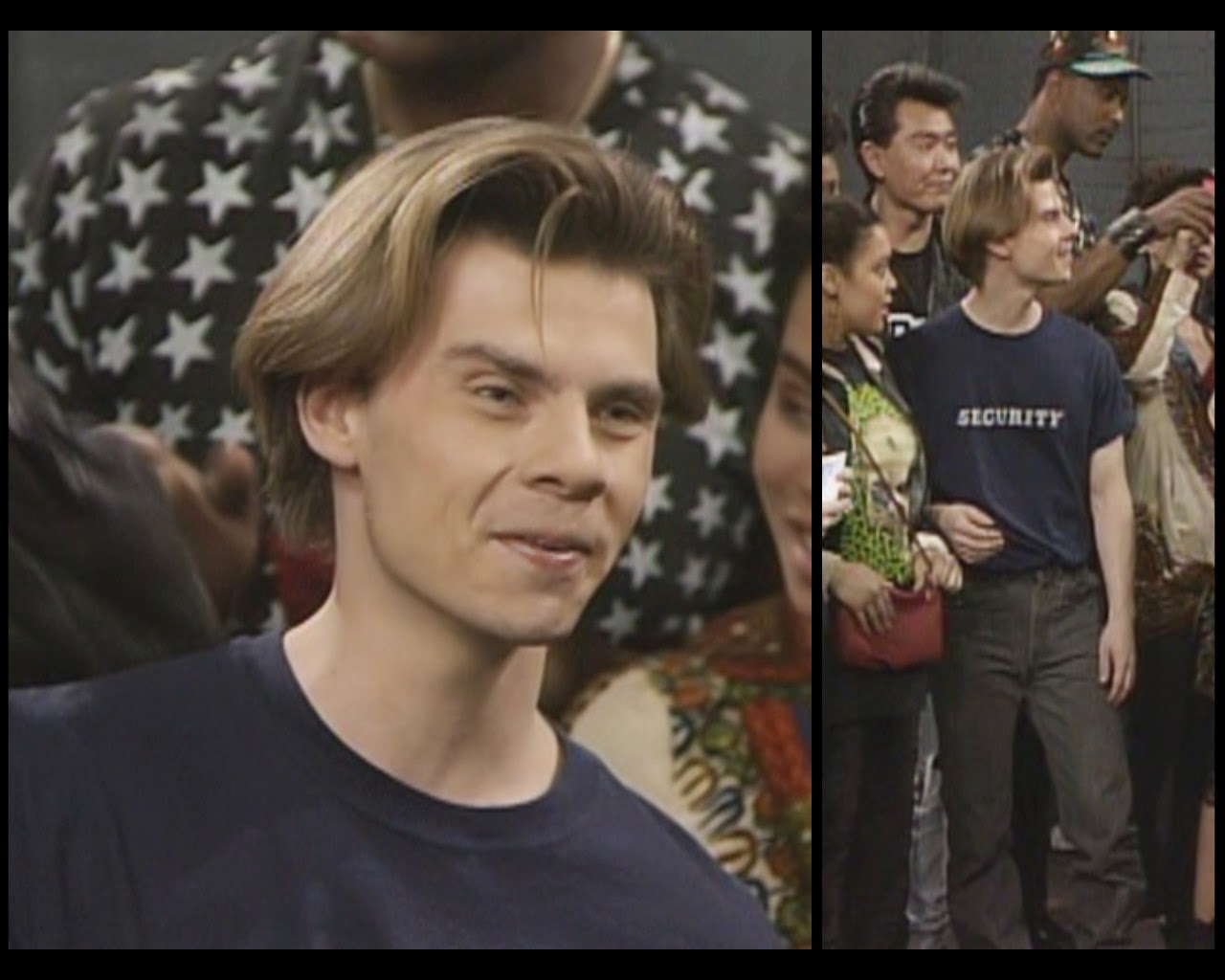 Girl, you'd be so pretty if you'd just smile.

Speaking of scuzzy River Phoenix knock-offs that I'd totally bang for stolen concert tickets, here's Nicholas Sadler as the dirtbag who swindles the ladies out of their chance at seeing the band. What can I really say? He's trying, with some success, to look like a sleazeball portraying a teenager's impression of a security guard. 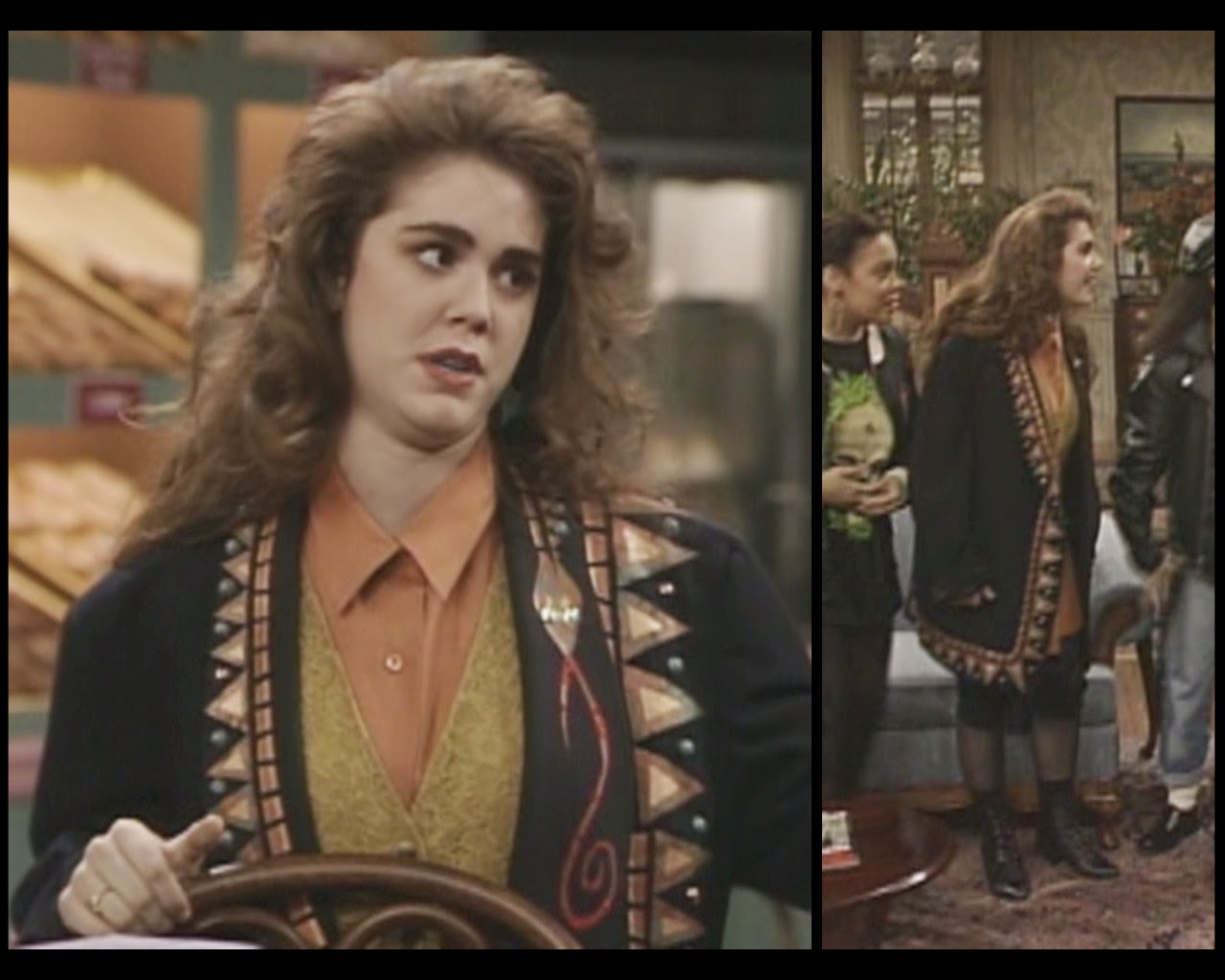 Friggin' Susan. She was the one who got Vanessa in trouble for drunkenness last time, and now she's concocted this ridiculous plan to take everyone to Baltimore. (To be fair, it should not have been this hard to get to Baltimore and back.) I'm not sure what her deal is in terms of dressing herself. Everyone else is at least pretending at dirty rock, and she's dressed like the gift shop at the Alamo. Get that throw rug out of here. 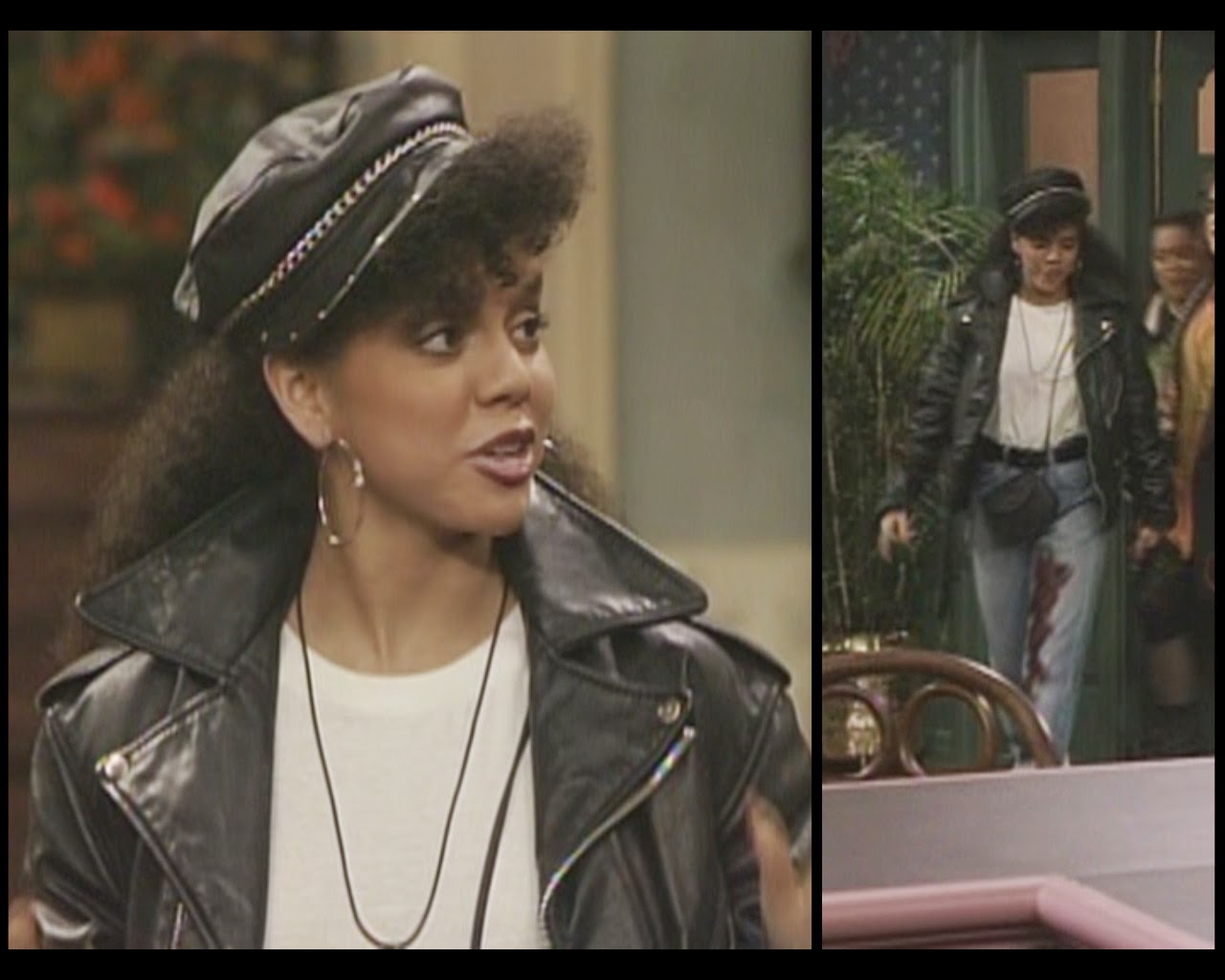 Kara loses her typical fast-talking qualities this week. She's also not layered to death, though I wouldn't call this look understated. Or fashionable. It's definitely biker chic as interpreted by the costume department on a sitcom, but it kind of works. I don't know if I believe that the Kara we've com to know would own this ensemble (by contrast, the previous look seems plausibly like the only black garment Susan owned), but I'll assume she borrowed from someone. 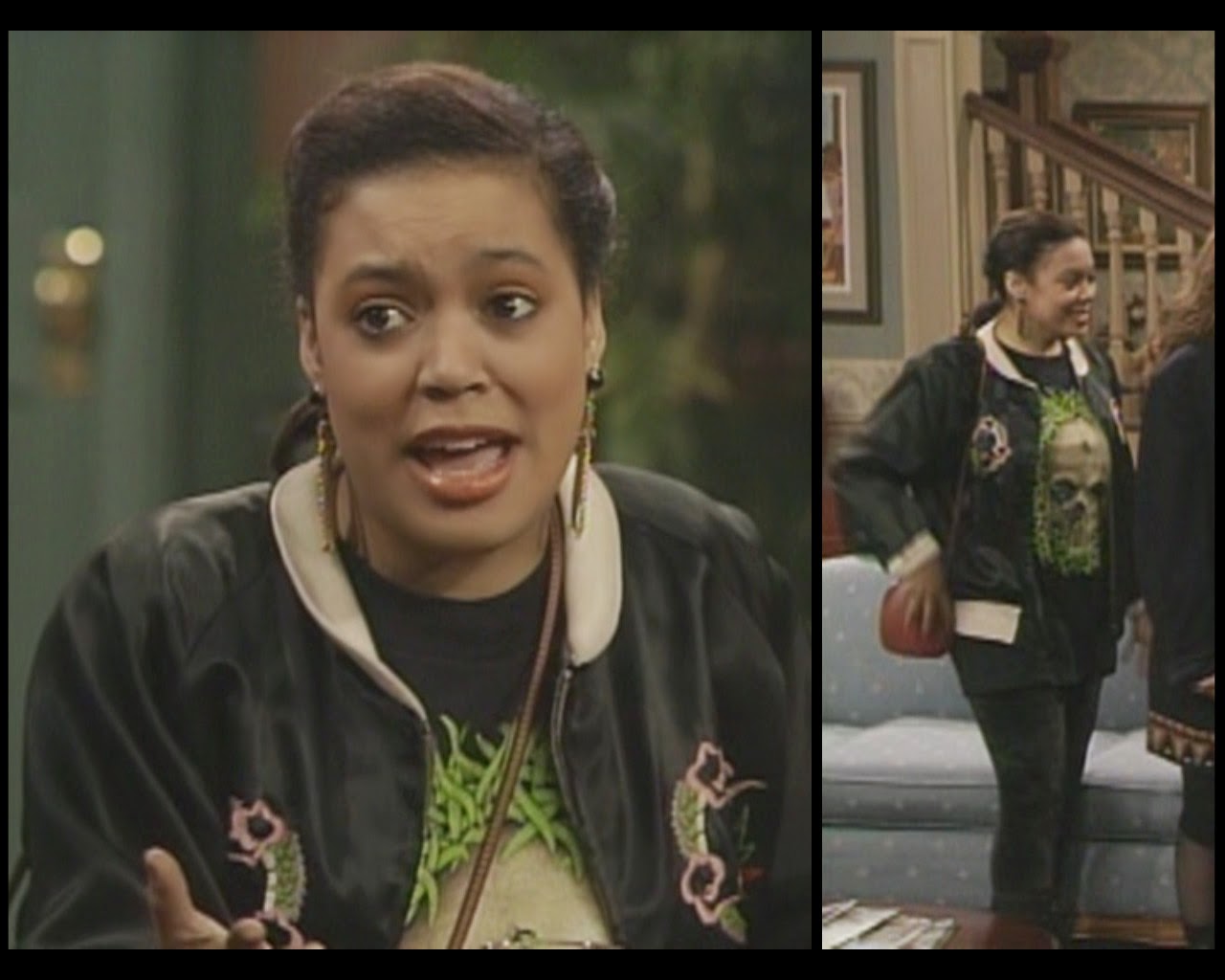 No one in this clique owns black eyeliner?

Sweet, innocent Janet Meiser is maybe wearing her older brother's t-shirt or something. It's huge, and again something I don't believe came out of her closet, so maybe that's an intentional choice to suggest a loaner. The jacket might be hers, though, as it fits and is only vaguely connected to the badass goddess theme she seems intent on portraying. These girls look mad suburban. Has Brooklyn taught them nothing? 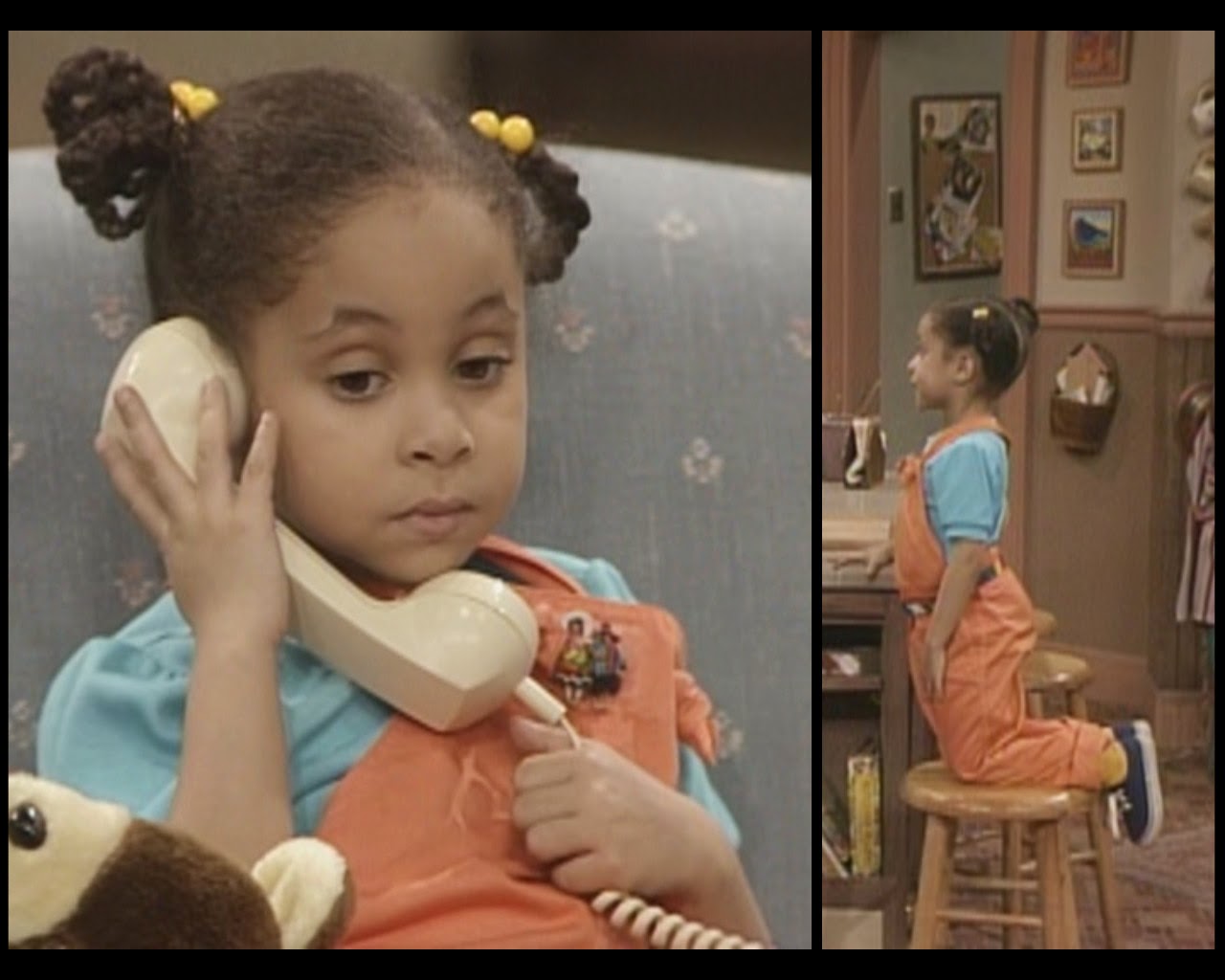 Pay-by-the-minute hotlines, and other outdated references.

Olivia sticks to the bright pastels, though with the bold addition of a rainbow belt and a pin representing a couple from an unidentified indigenous culture. 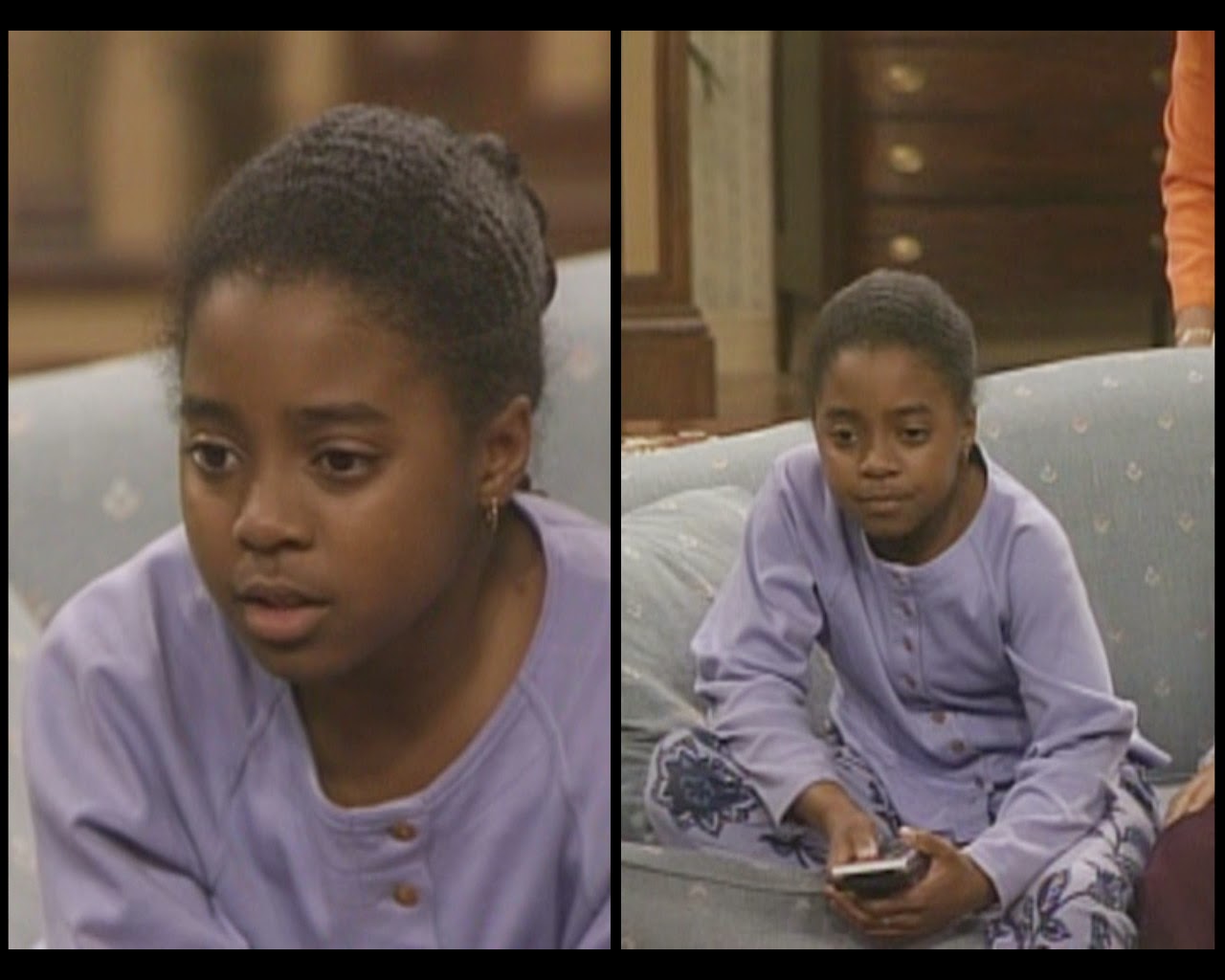 Look at how invested she is.

Do I believe that Rudy is concerned here? Yes. Do I believe that she spends her nights watching the news? Not really. Do I think she's in pajamas? Possibly. The fact that I'm even questioning it means that this look is not a resounding success. (Though there are too many buttons for bedclothes... hard plastic circles with thin edges aren't generally comfortable to lie down on.) 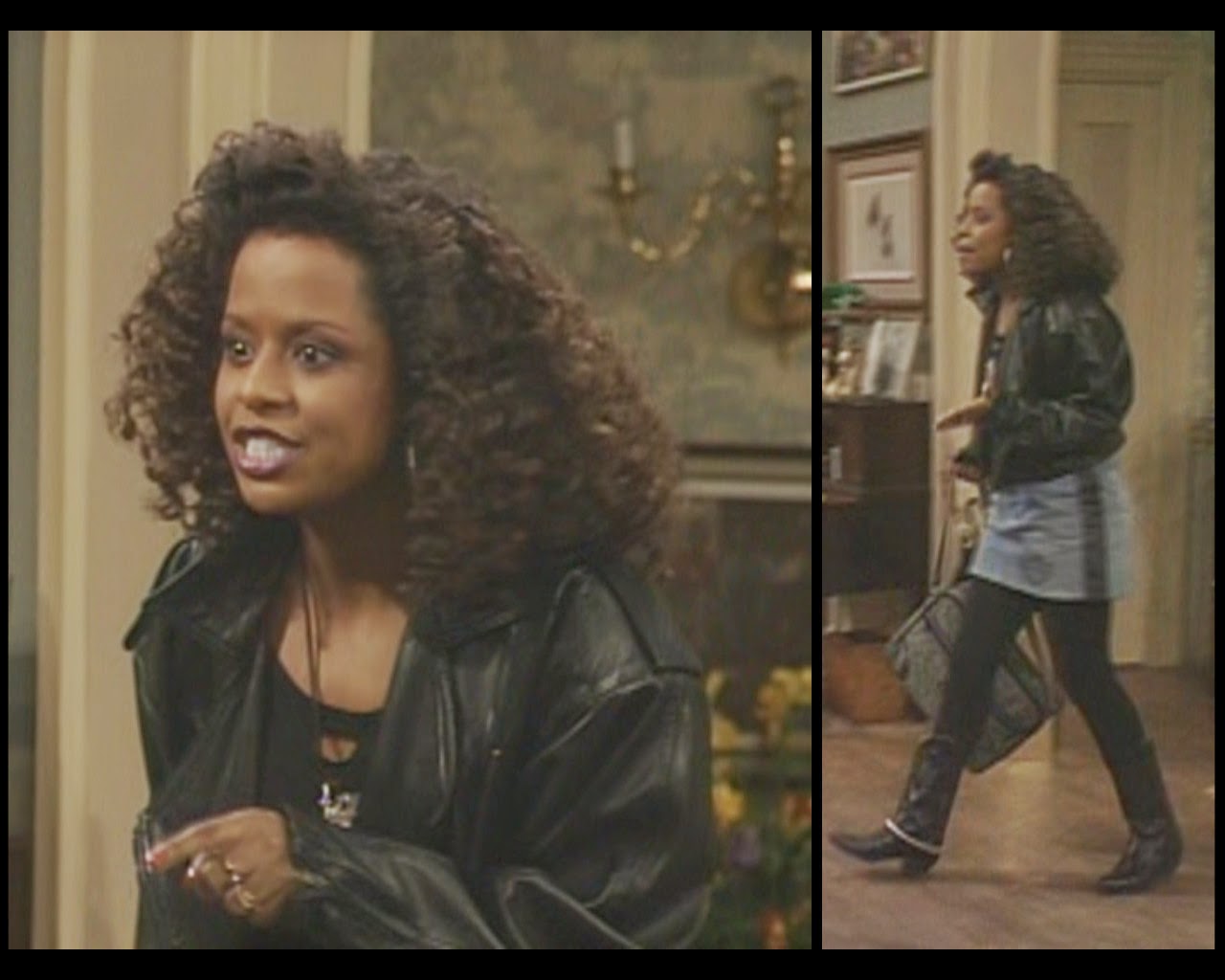 Almost the victim of a mother eating her young.

At least Vanessa went for it with the biker boots; I'm especially fond of the anklet over the footwear. Black tights, denim skirt (with a black stripe) black tee, leather jacket: it's all fairly standard stuff, but at least it fits. It's a cohesive look that delivers marginally more realness than her friends' attempts. 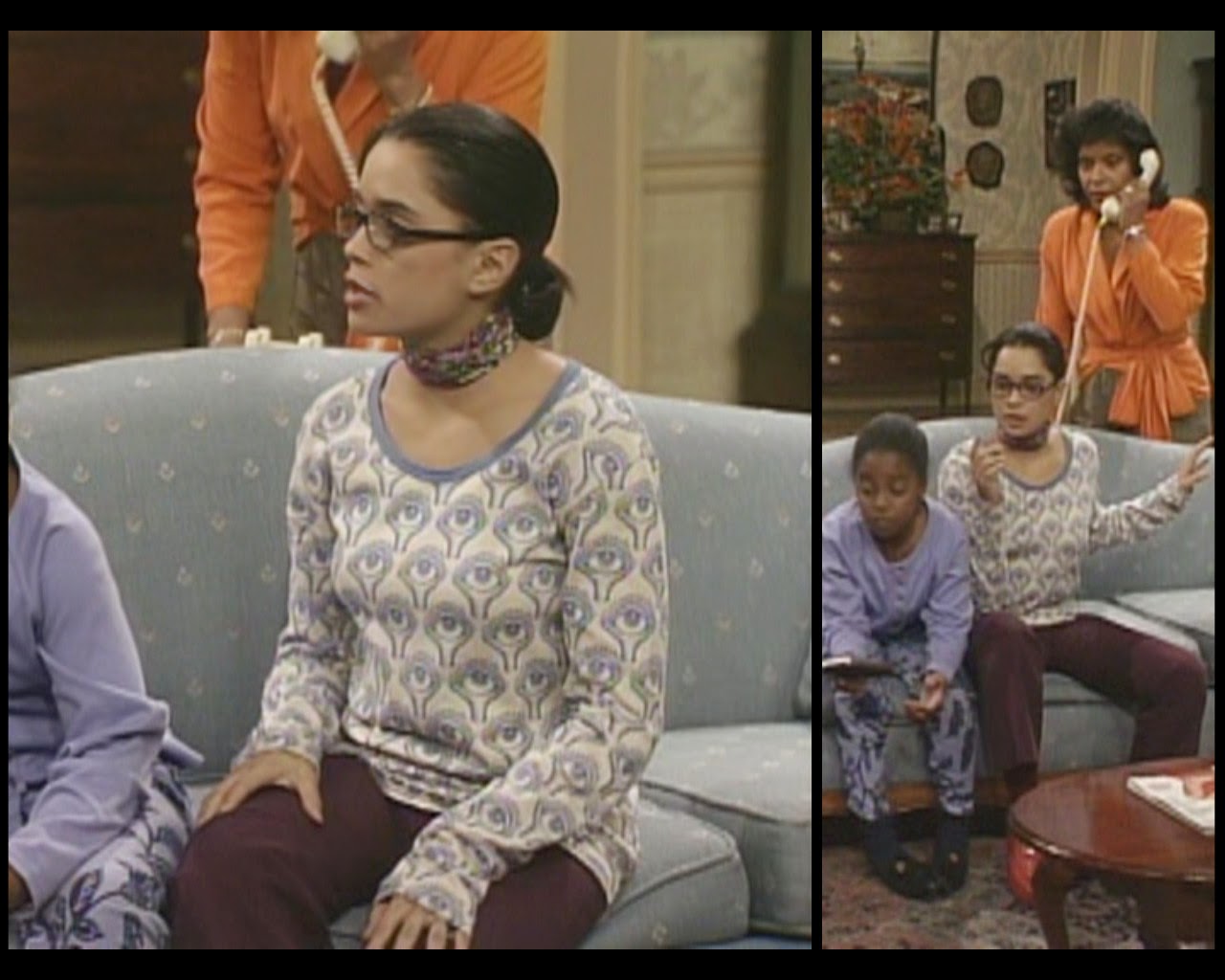 At first I thought this was a pretty tame offering from Denise, but the more I look at that eye-on-an-appendage print, the more it seems really unnerving to me. The color story here is decent, if a little plain, and the neck scarf is a miss for me, though we're bounding headfirst into the '90s when chokers were all the rage, so I suppose she's getting in ahead of that trend. This is not her usual greatness, but it's fine. 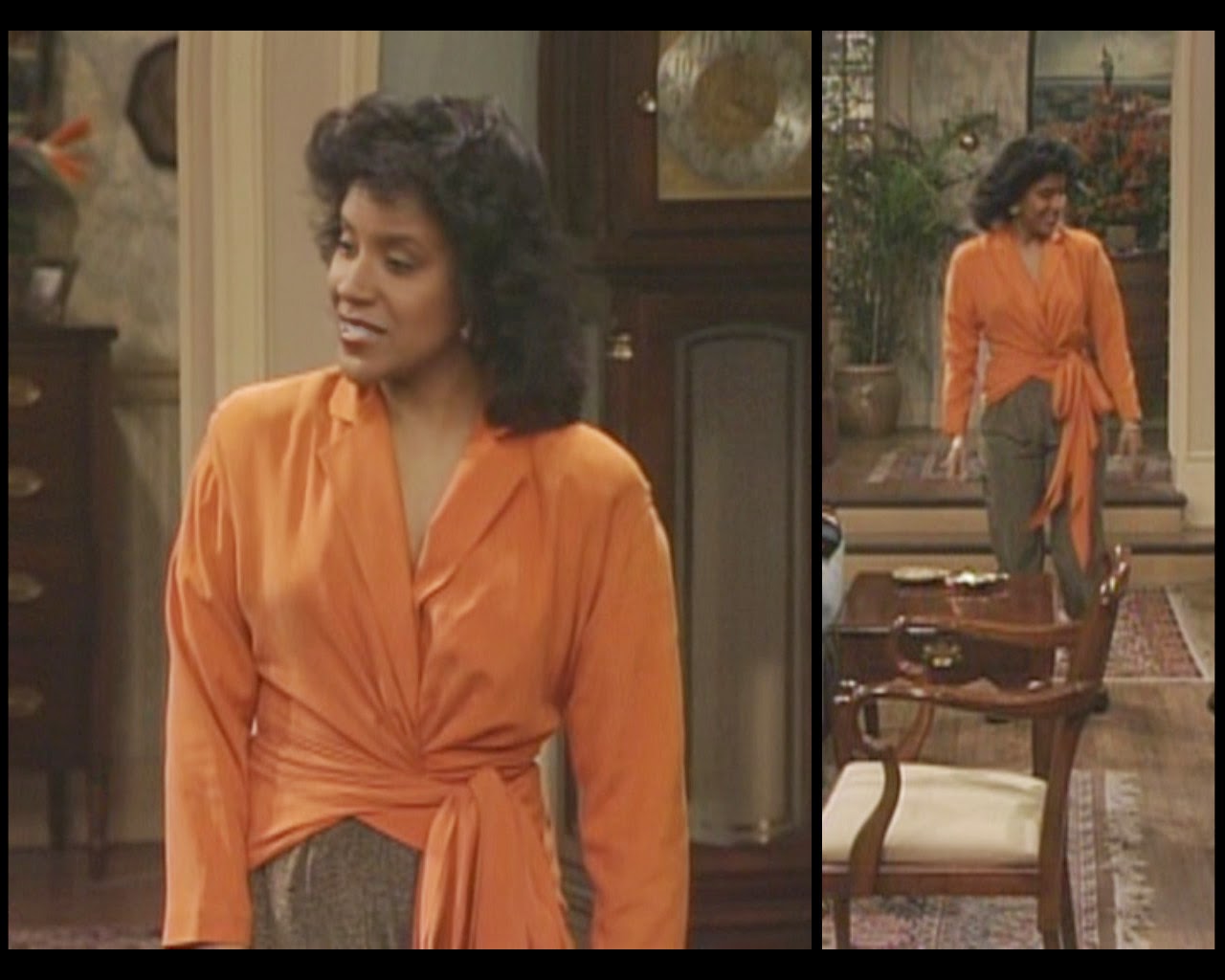 Here's the thing: I'm away from home and don't have access to my usual searchable archive. I'm fairly certain that Clair has already worn this absolutely perfect orange wrap top, but I could be mistaken. I'll update later when I can verify this hunch. Until then: this is an absolutely perfect orange wrap top. The size and length of the sash are just the right amount of overdone. Simple olive trousers are an ideal counterpoint. Brava. 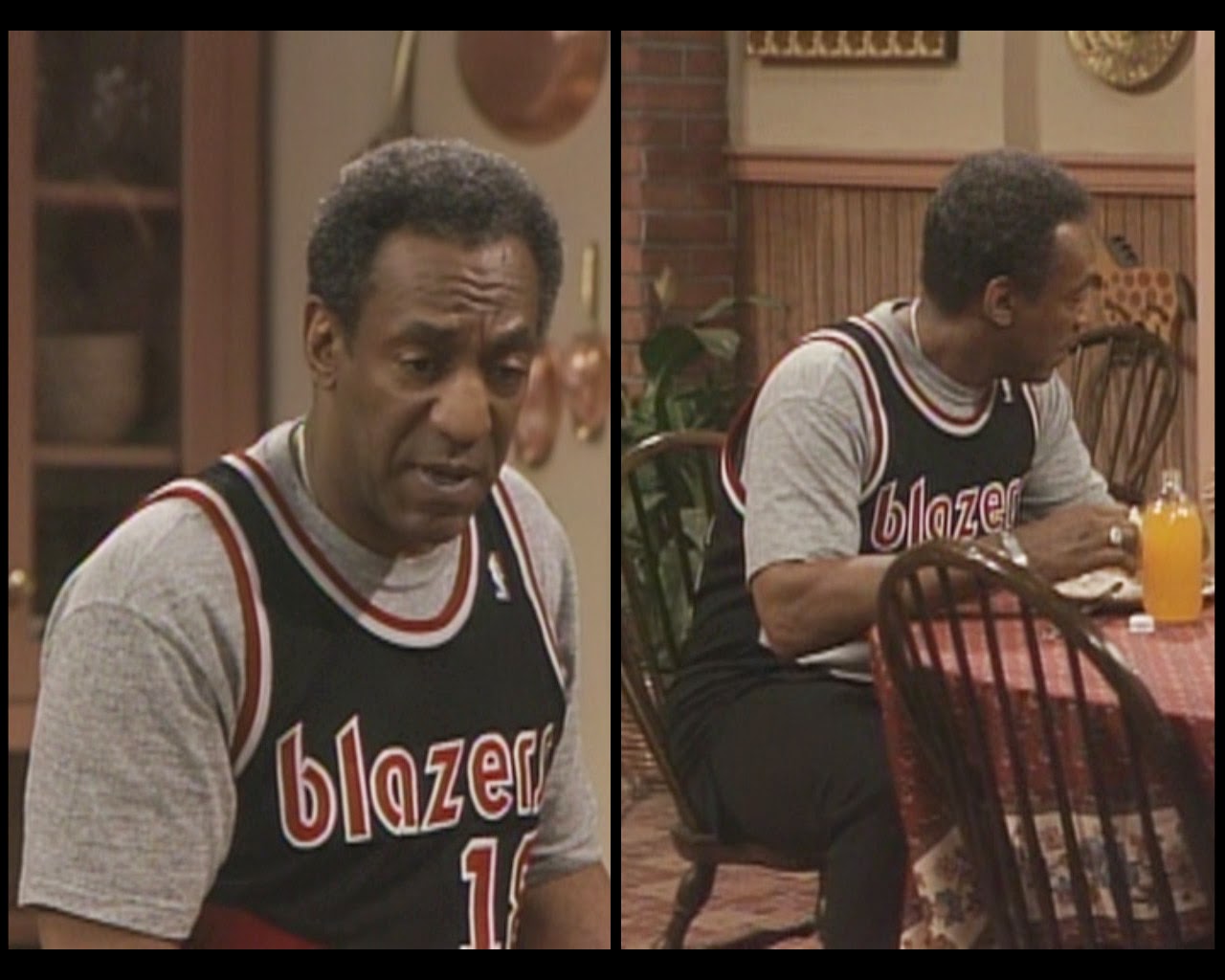 So very not ballin'.

And finally, Cliff wears this. All day. I don't know anything about sports, but I know that he doesn't play for the Blazers. Whatever, he works hard and has earned his day off, so I shouldn't judge.

And there you have it: the day that Vanessa effed up again. Let's hope she has learned a valuable lesson about listening to her idiot, unfashionable friends. (Side note: the Huxtable children almost never get in trouble without the urging of some outside force. They're good kids who trust too easily, not bad kids who come up with their own ideas of how to break the rules. Key cop-out.)
Posted by Unknown at 8:00 AM