This is one of my all-time favorite episodes, but really only for the last two minutes. The build-up: Theo tells his father, Martin, and Elvin that they no longer have romance in their lives because they are married. The husbands decide they will have a contest to see who can impress his wife the most with a romantic gift that costs under $25. The rest of the episode is standard stuff, with a lot of stalling to show that Cliff has no idea how he's going to pull through on this one. But his last moment with Clair is completely terrific both in terms of how it's scripted and how it's acted. 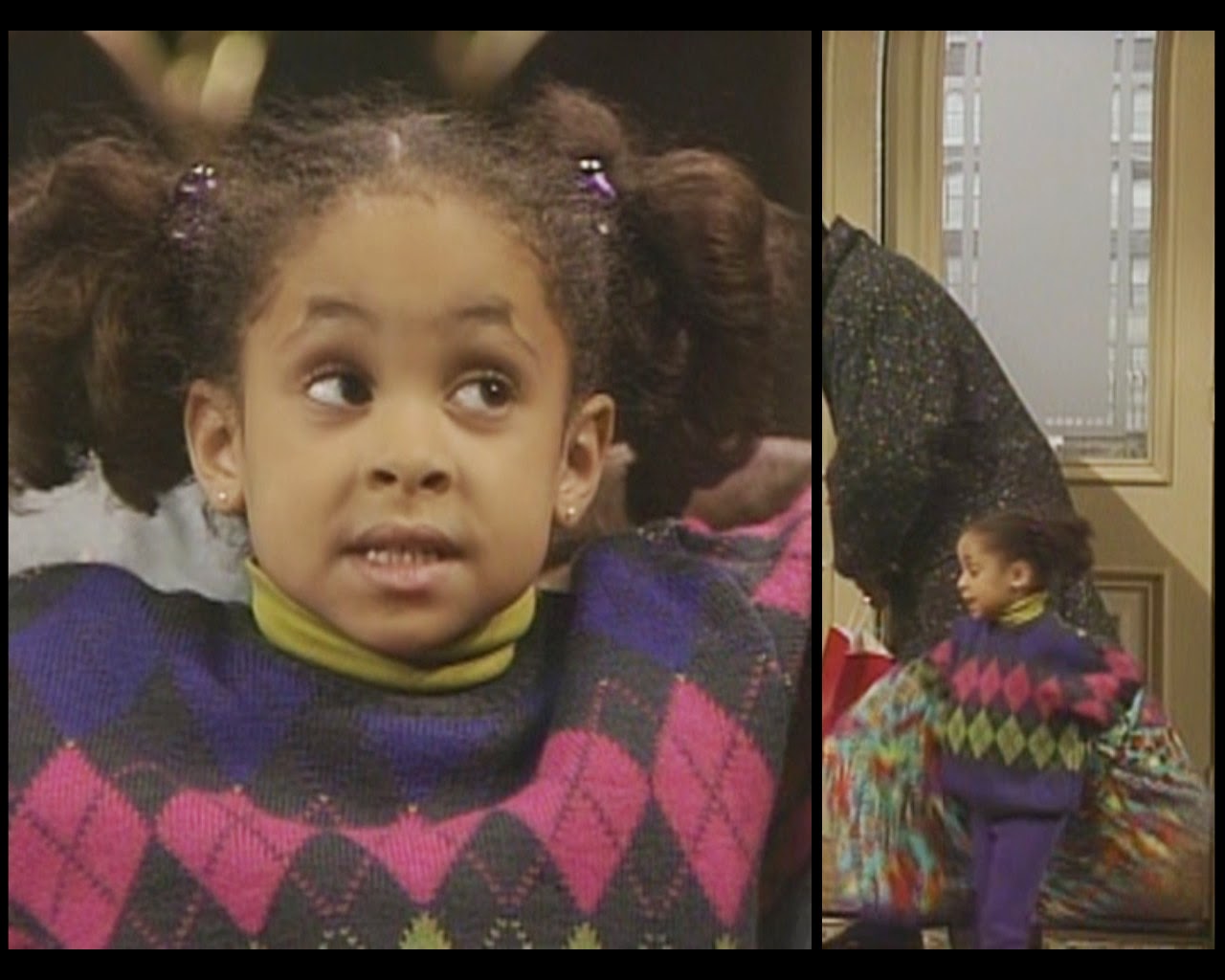 Olivia's appearance is interesting because it is one of the few moments in the series that goes for a running gag. Back in the birthday episode, when Olivia wanted Cliff to help her find her tricycle, he stalled by looking at his hangnail and then gave her bogus hints. This time around, when he asks her about the gift that Martin got Denise, she plays the same tricks right back. It's a clever bit. As for the clothes, this is perhaps the first time we've seen a dark gray from Olivia, and it feels wrong. The brighter shades are more in her wheelhouse, but that argyle is pretty severe by her usual standards. 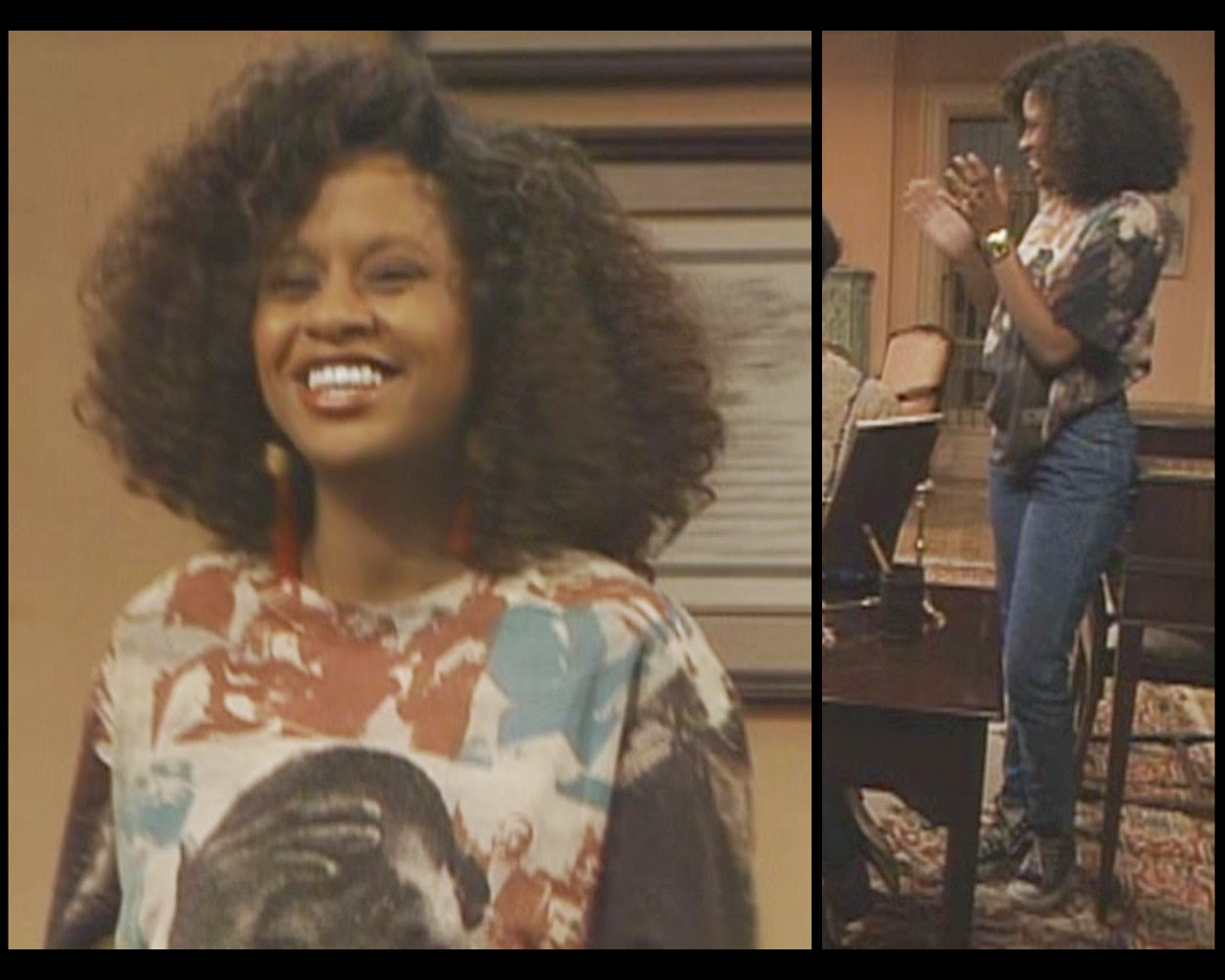 Let me borrow that top.

Though Rudy technically shows up on screen this week, she has no lines, and thus I feel comfortable skipping her. Vanessa barely speaks, but those few words get her into the blog. There's not a ton to comment on about her wardrobe. Solid work on the jeans, and there's not much you can complain about elsewhere. I like that her tee is printed all over, which is superior to a plain shirt with a graphic on the front. Also, whether by initial design or her own personal scissor work, it's cut irregularly along the bottom in a way that actually kind of works. The best choice here is that pair of tassel earrings, though. Fantastic accessory. 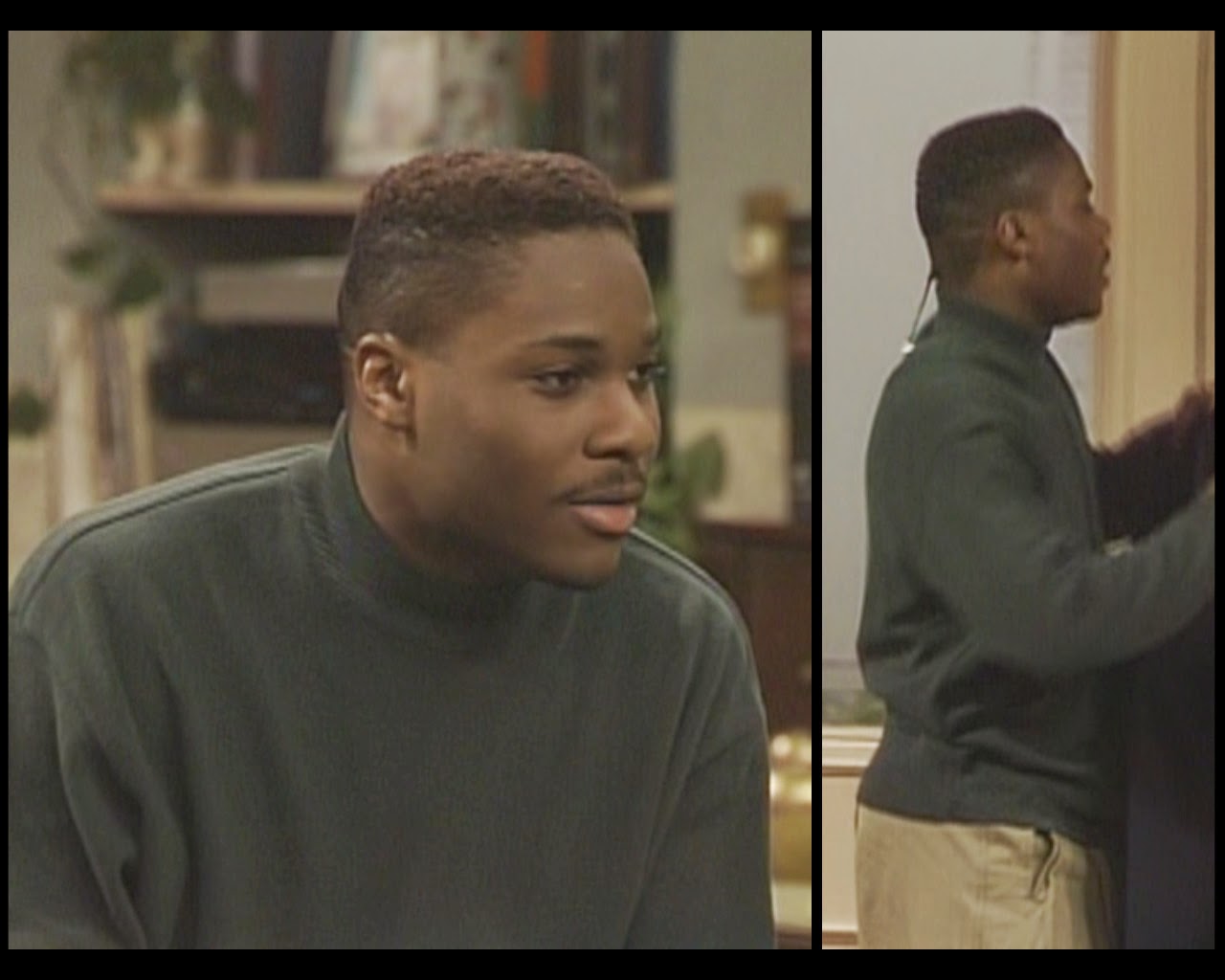 It's never not ugh with this one. 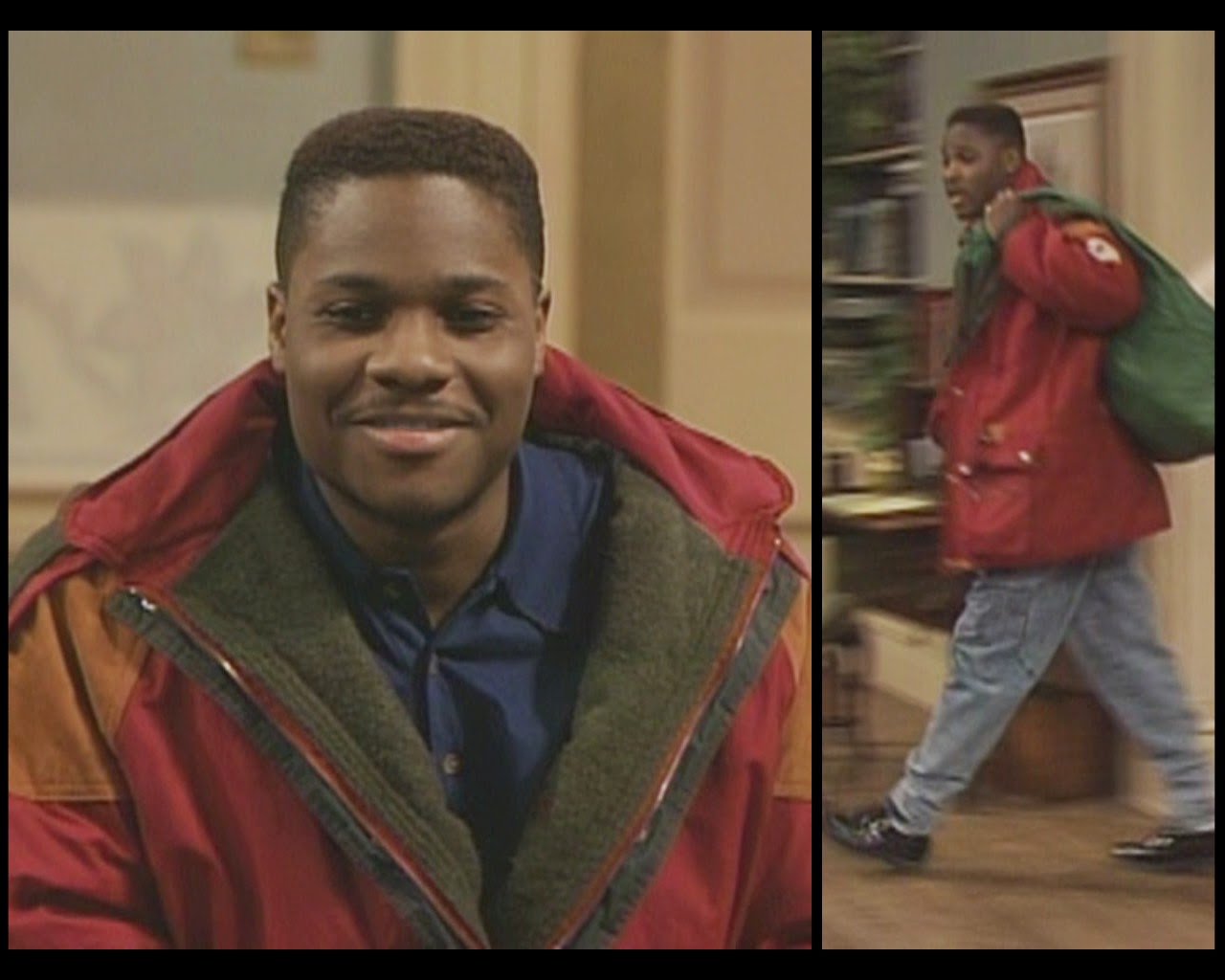 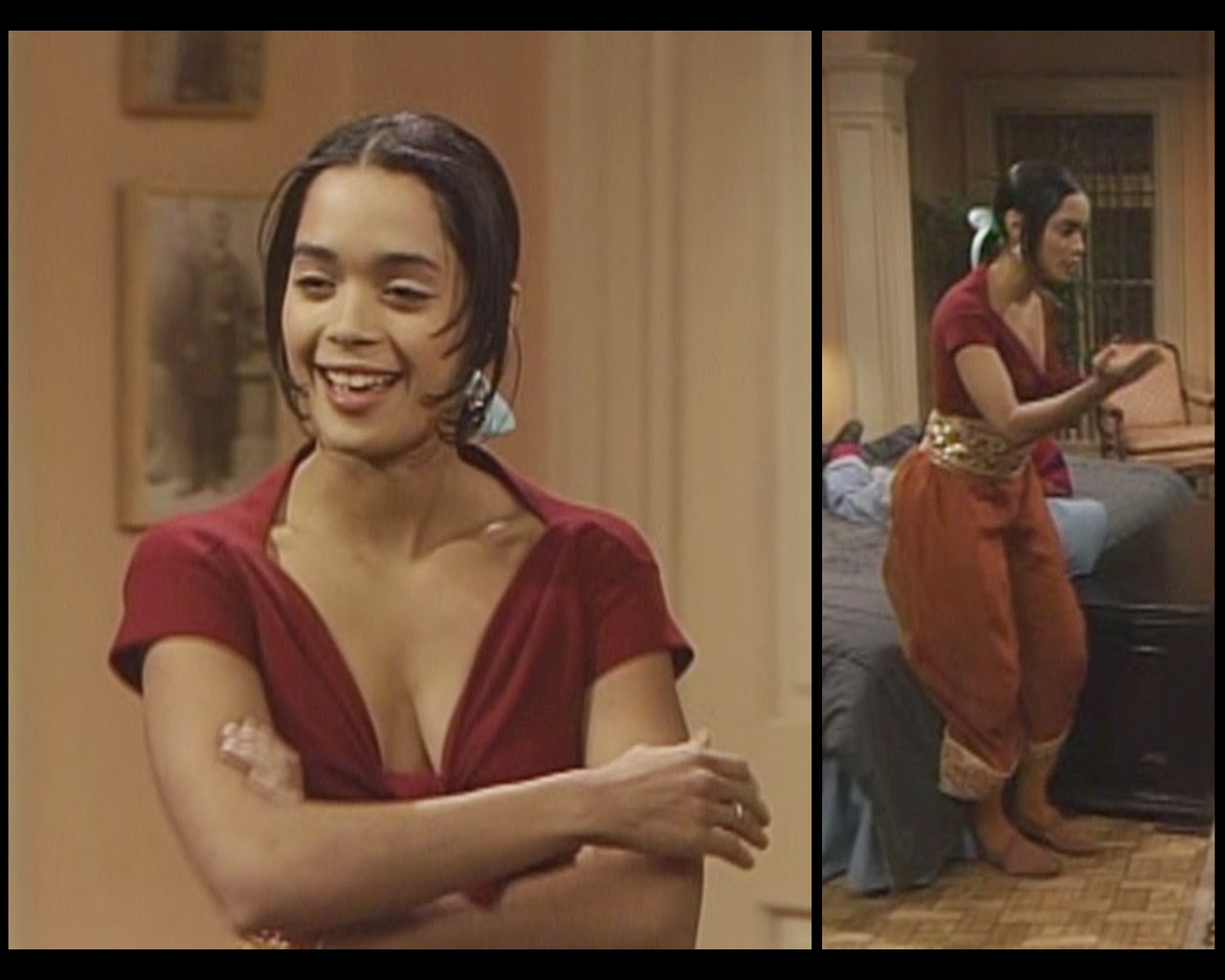 My first wish is for a change of clothes.

Denise appears at the end in her version of formal attire for the big dinner scene. She doesn't typically show this much skin, or if she does, she chooses less conventional patches of skin to show off. (I recall her opting for a couple weird back cutouts, for instance.) So this low-cut, midriff-baring I Dream of Jeannie look doesn't seem right for her. The voluminous pants are OK, though the thick cuffs and flashy belt look a little cheap. But the top comes across like a heavily altered t-shirt, making this getup overall feel distinctly less dressy. The tone doesn't fit the occasion, and I know she can do better. 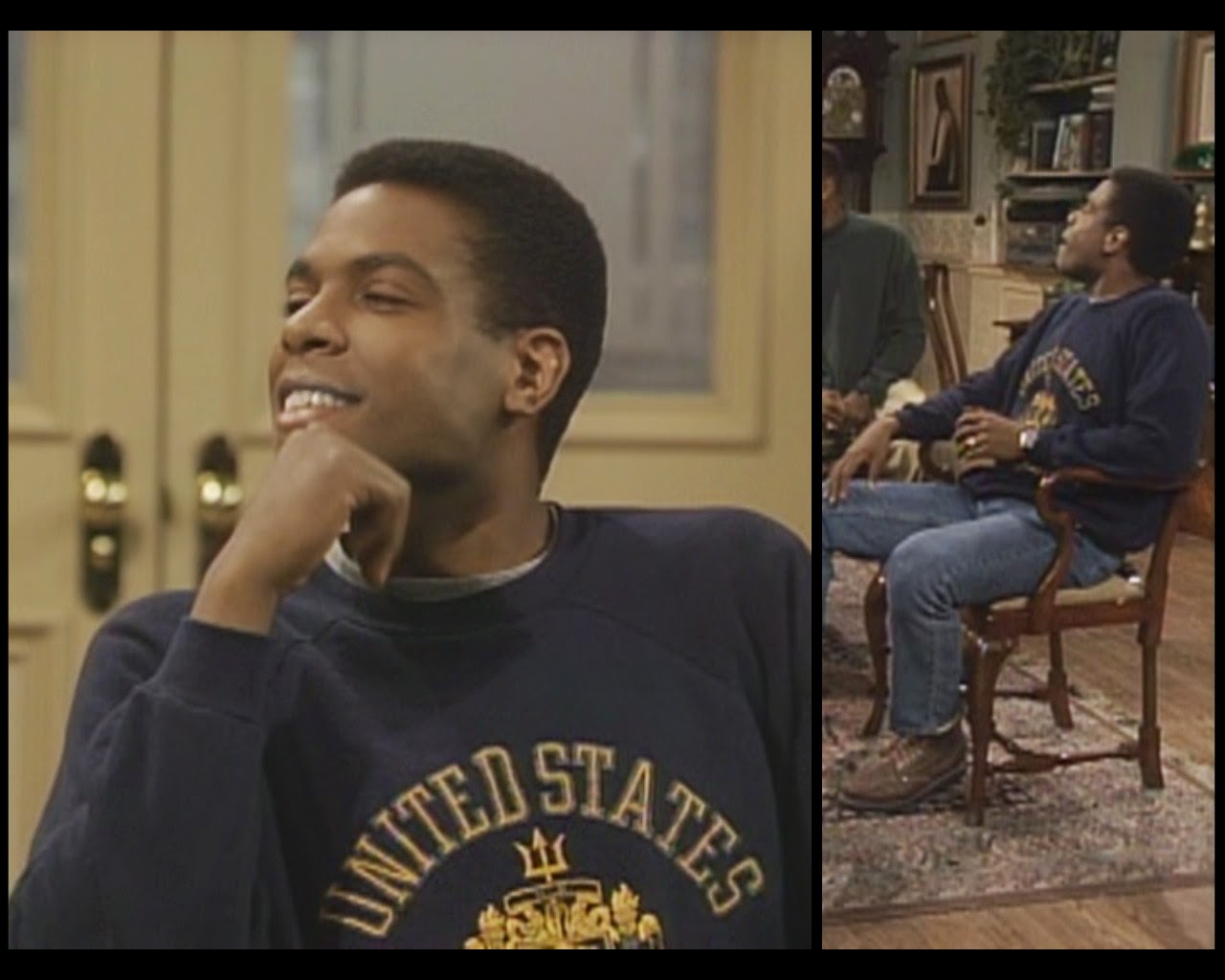 Hey guys, did I mention I'm in the military?

Since the show opens with the men doing yard work, I can't fault Martin for his sweatshirt and jeans. The costume department will take absolutely any opportunity to remind you that he's a Navy officer, though, as evidenced by this logo. 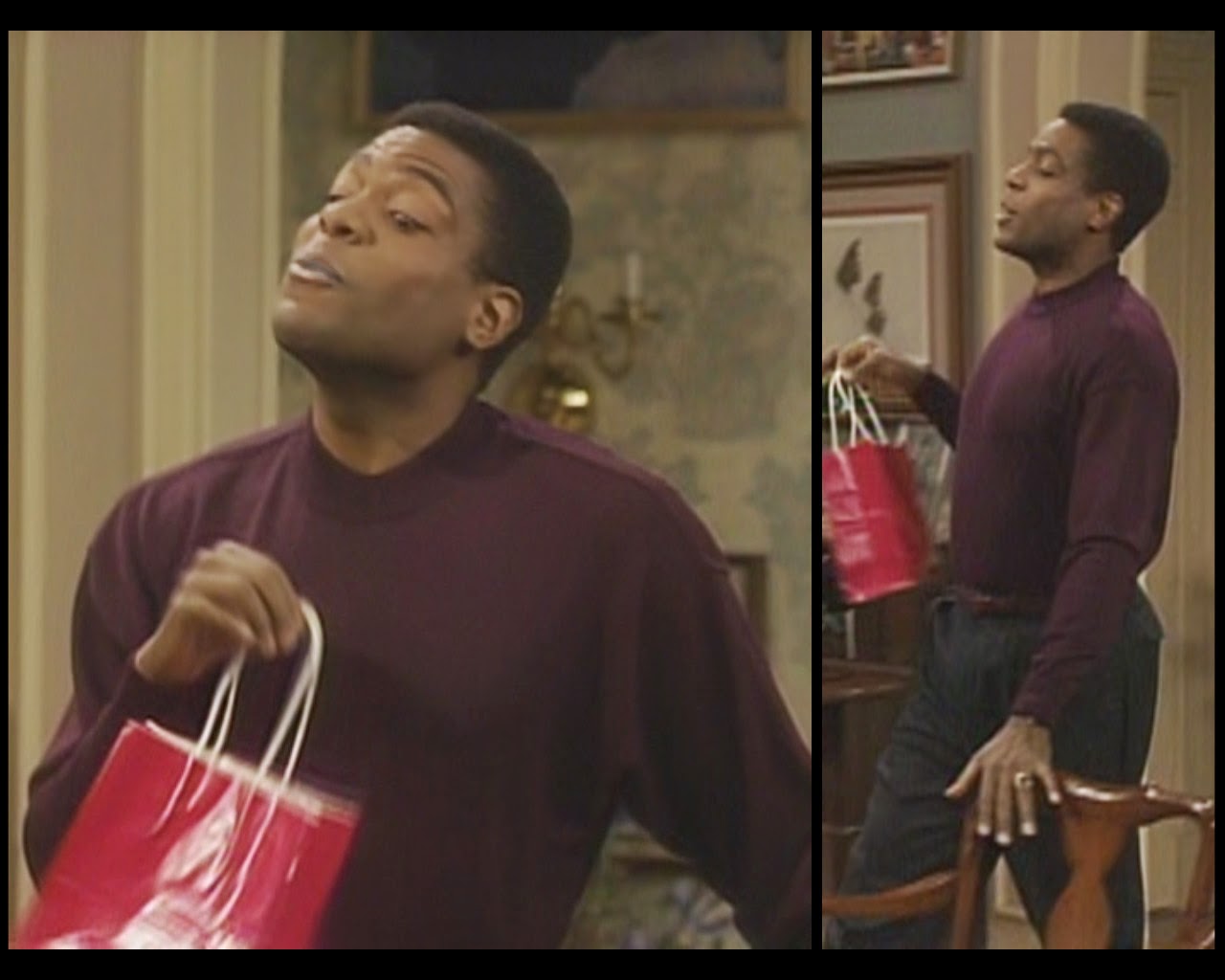 I don't know why he's walking like a fancy lady.

Eggplant mock turtleneck. At least he didn't pair it with those mom jeans he's always wearing. Still, that top is something Theo would wear, and that can no longer be viewed as a compliment. 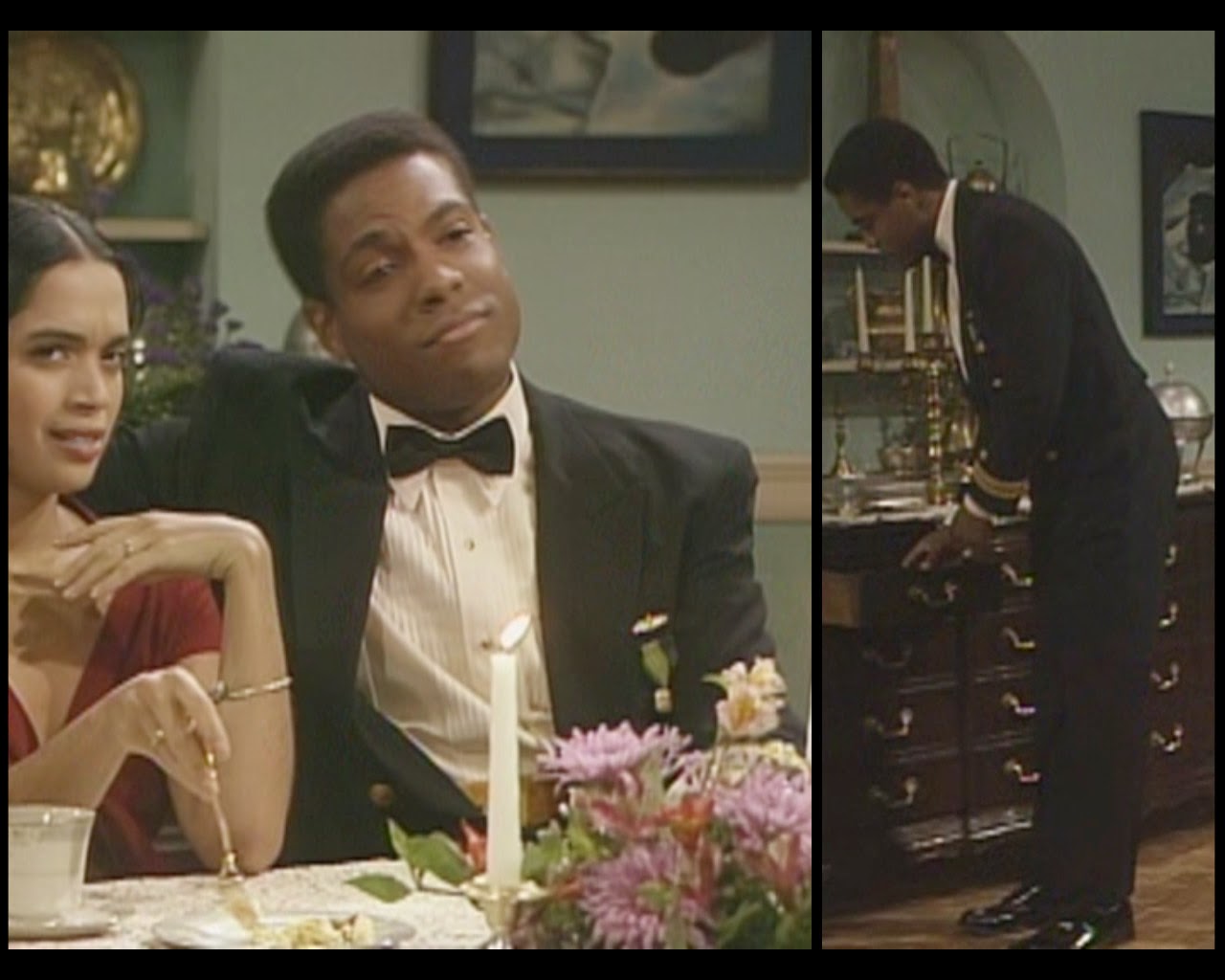 It's all about Denise's face in that shot.

This is Martin's dress uniform, which he's also wearing in this season's opening credits. 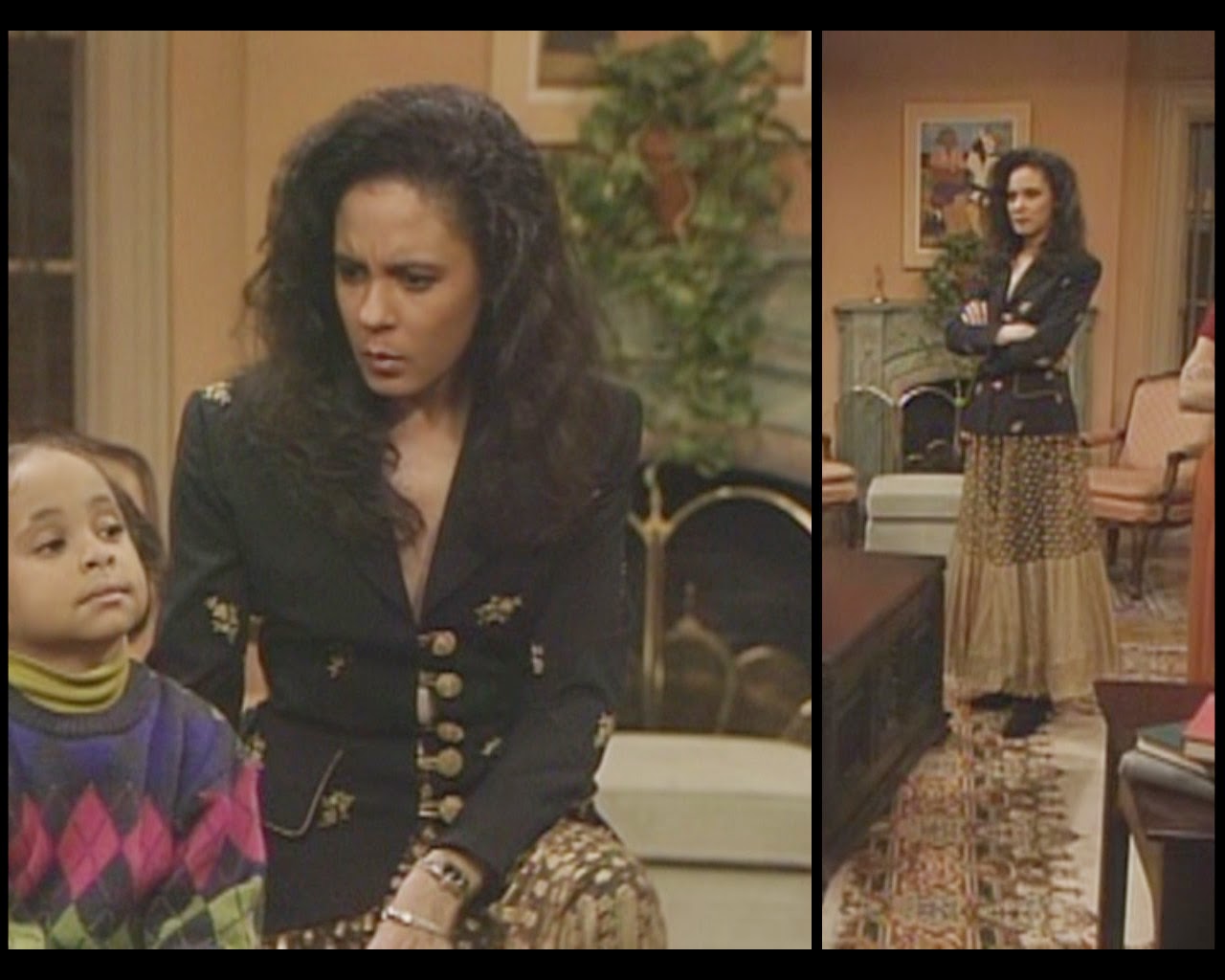 It's rare that I have anything nice to say about Sondra, but I'm actually fairly excited about this skirt/leggings combo. It's easier to see in motion, but the parts that aren't golden are actually transparent, meaning that you can completely see her legs through the outer garment. It's a daring move that has the potential for disaster but ends up being pretty fabulous. The structured blazer on the top is what holds it together; something diaphanous and silky would probably make this whole getup come across as flimsy. I'm really into the staunchness of the jacket and its heavy fasteners against the barely-there lower part. And who's going to say no to black and gold as a palette? 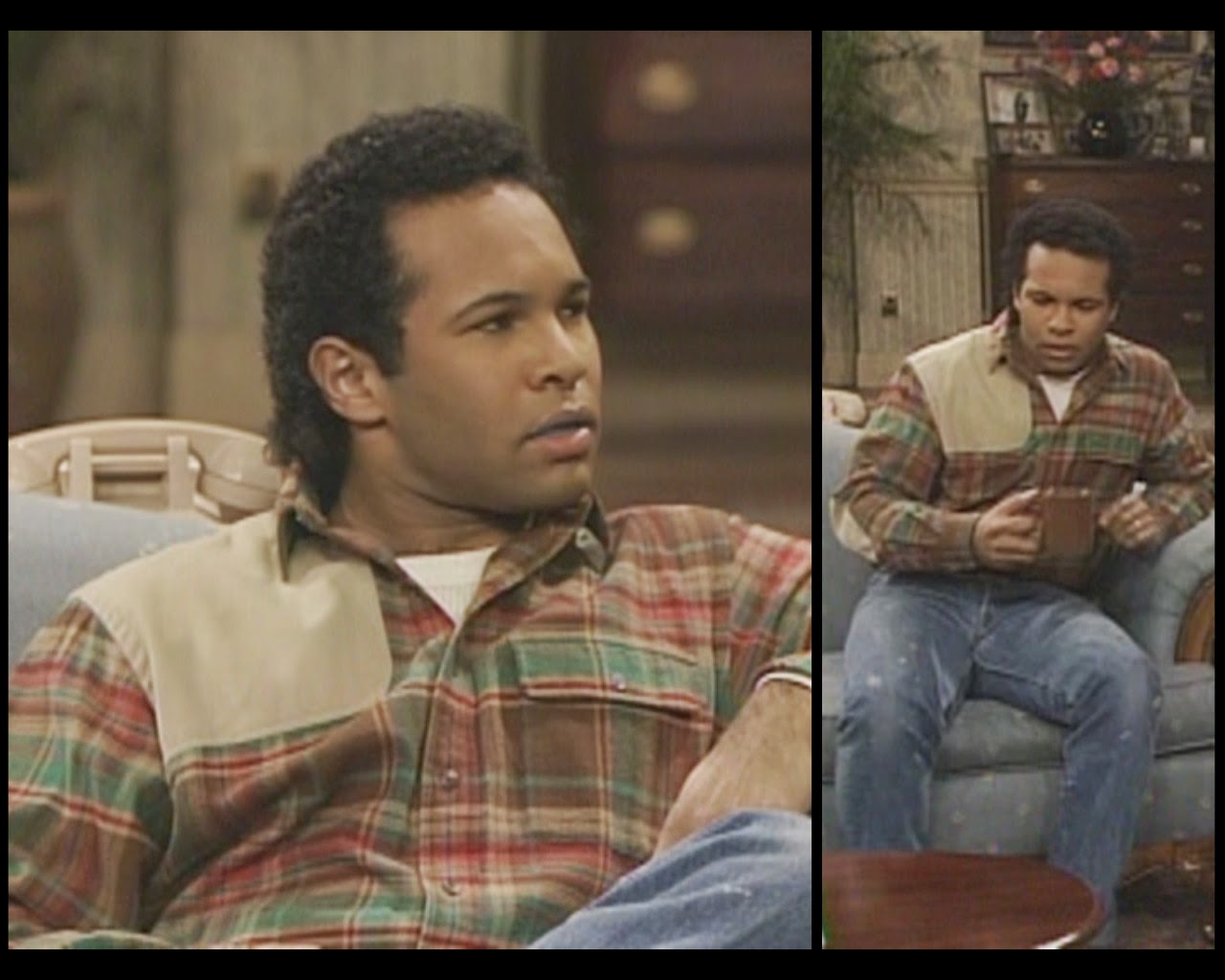 Elvin first wore this shirt in episode #4.8. The splatter of paint or bleach on his work jeans is a nice detail. 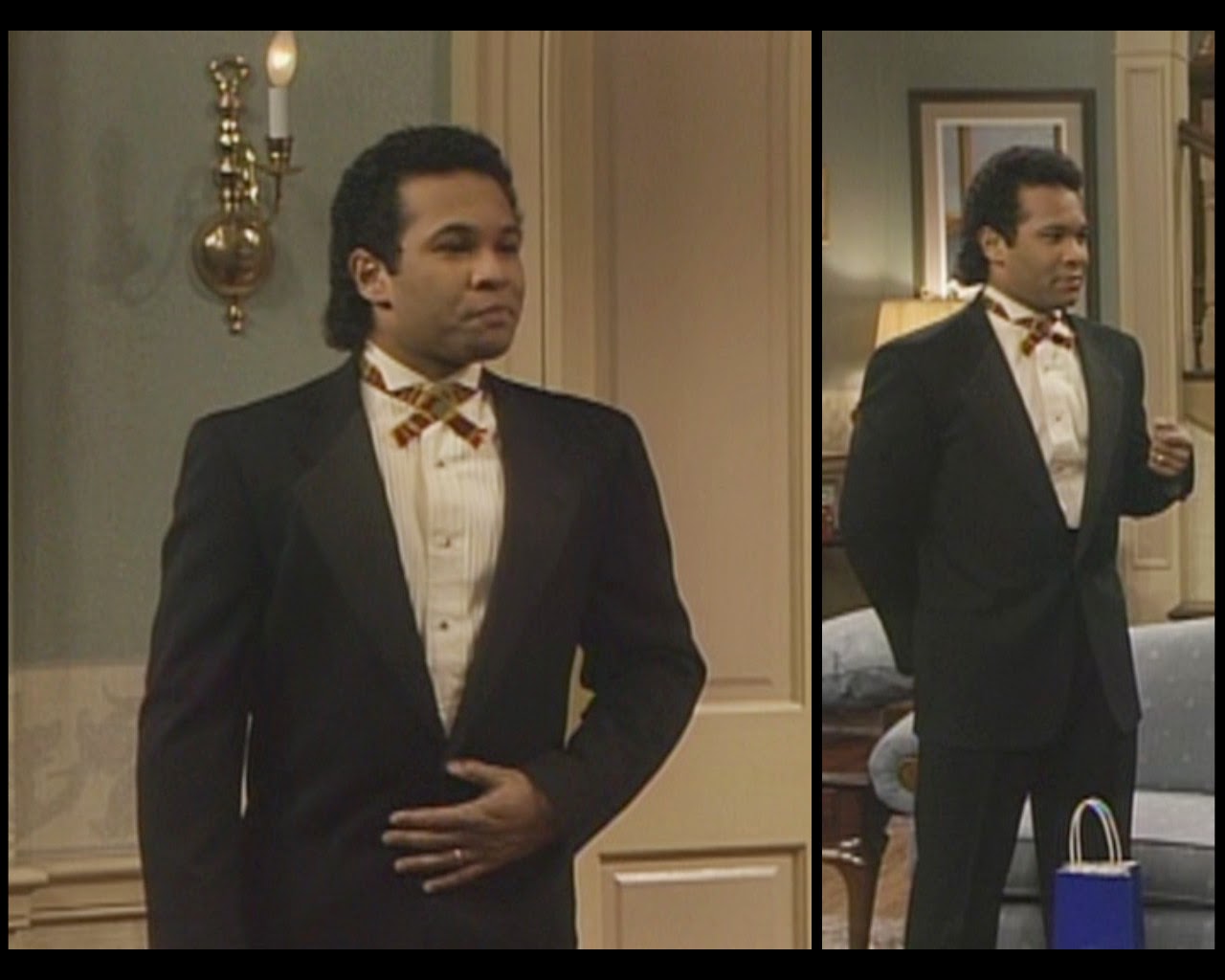 And a tux. Everyone looks good in a tux. 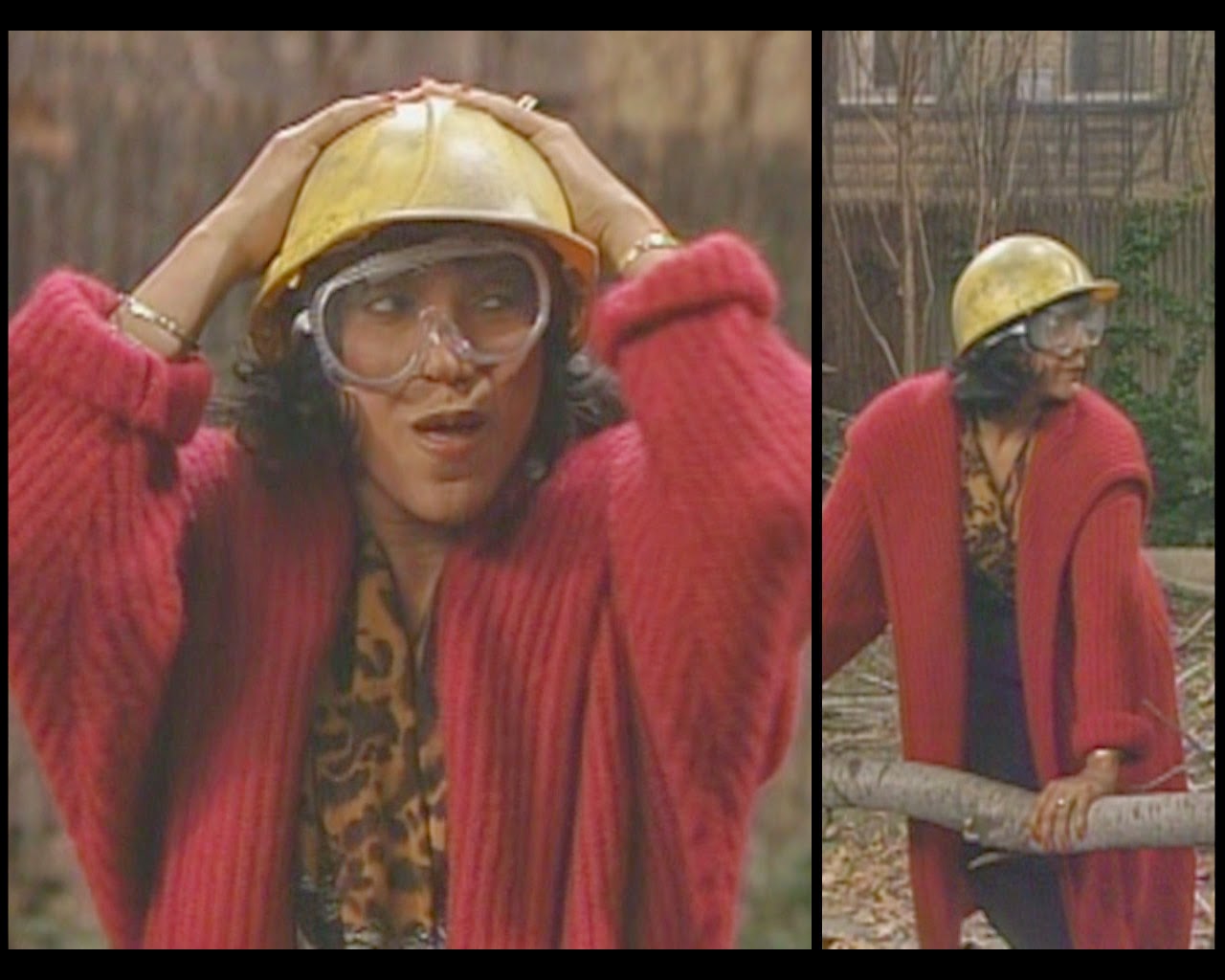 She can work anything.

Clair makes a brief appearance early in the episode to revisit her long-lost episode #2.7 sweater coat. There's some sort of animal print blouse going on as well, and I have a feeling that I wouldn't be a fan of it if I could get a full view, but I'm going to withhold comment since the entire outfit is never revealed to us. 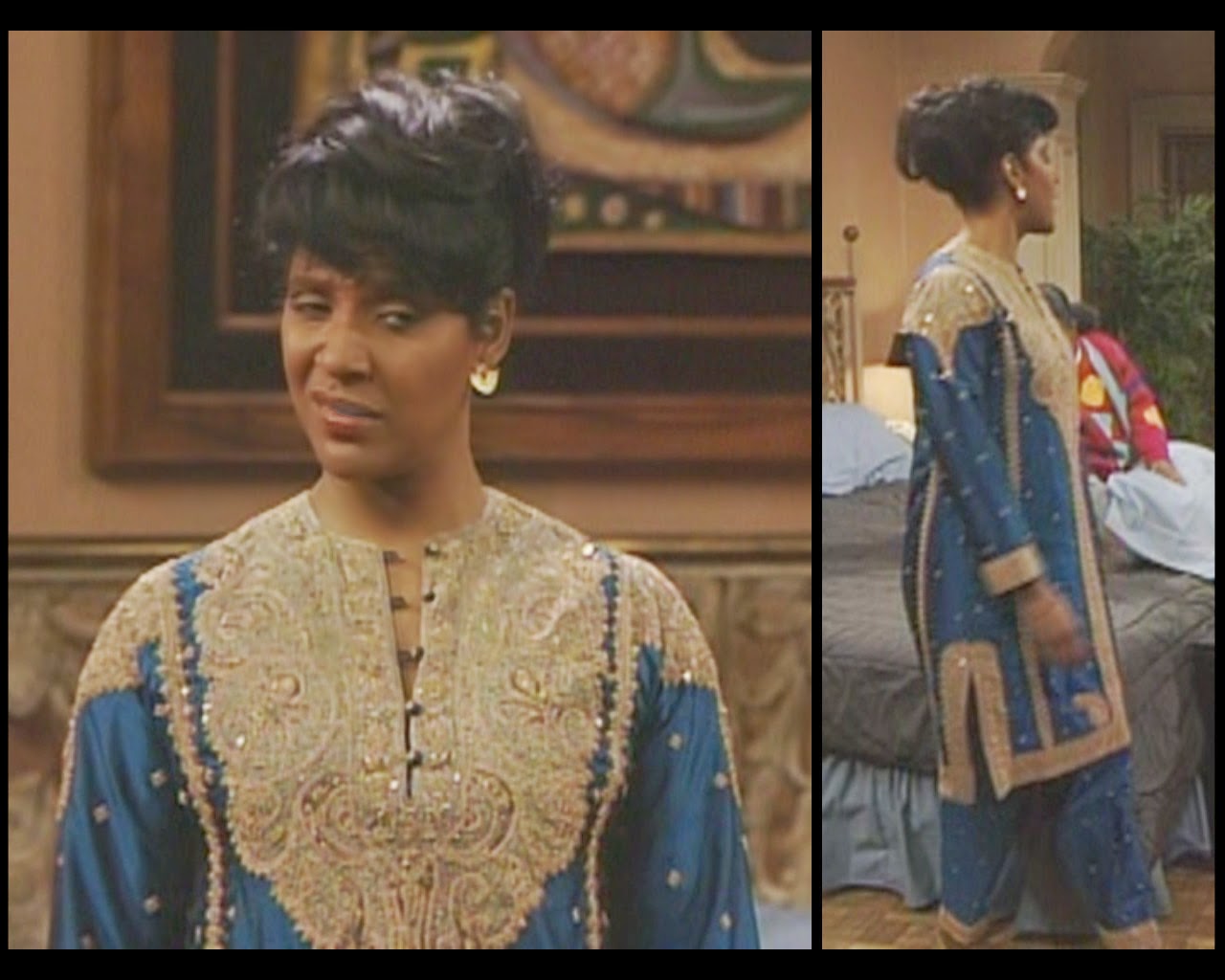 Stank and swank at the same time.

Of course, when Clair wants to get regal, she can get good and regal. Her daughter might be playing with some costume-in-a-bag version of Middle Eastern fashion, but Mrs. Huxtable has salwar khameez realness happening here. The shimmer of the fabric makes me hesitant to classify the specific shade of blue she's wearing, as it fluctuates from bright lapis lazuli to rich sapphire to deep midnight. It's beautiful on her, especially when joined with the ornate pale golden embellishments. This is a stunner of a presentation. 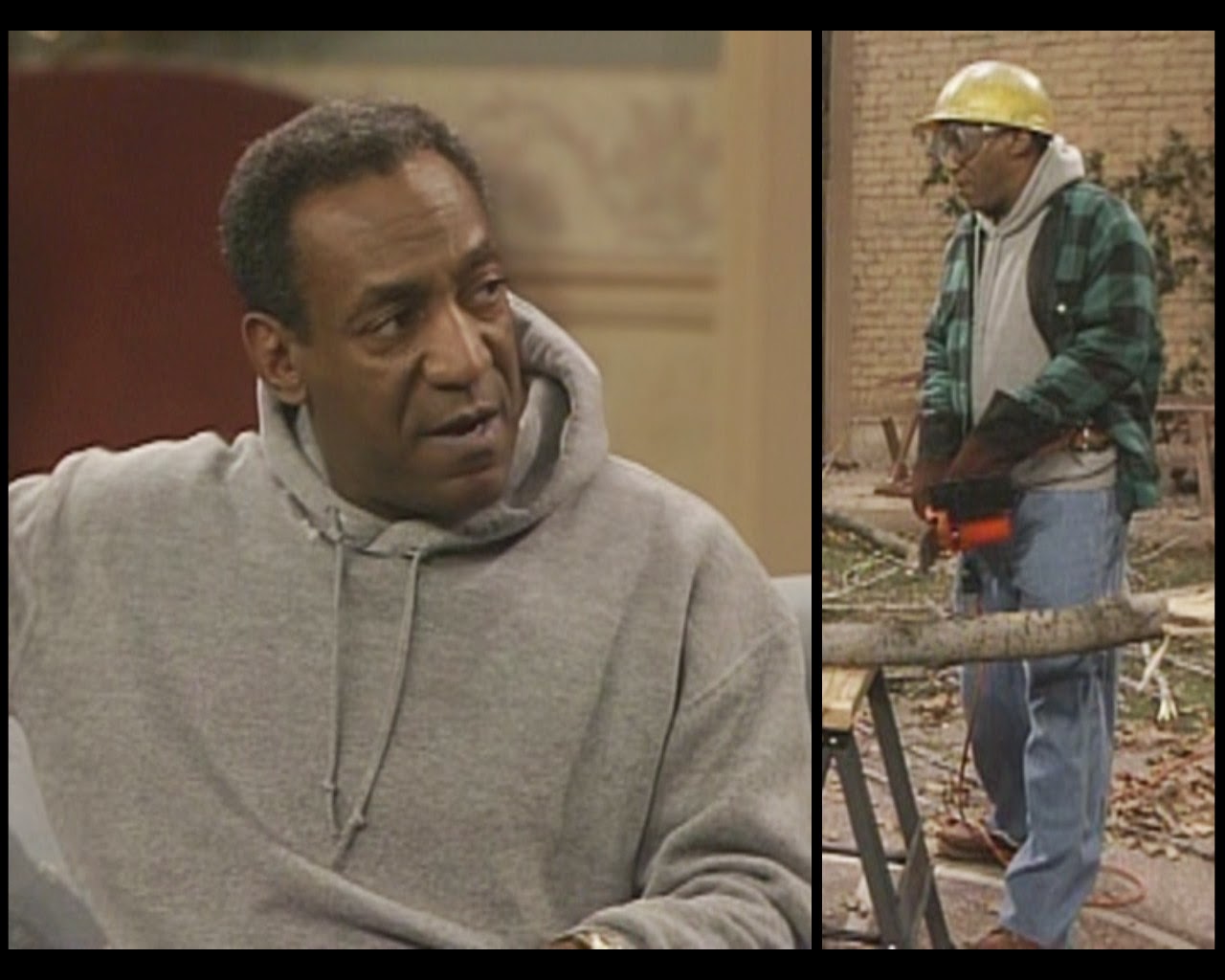 Cliff starts the day in jeans and a hoodie. Moving on. 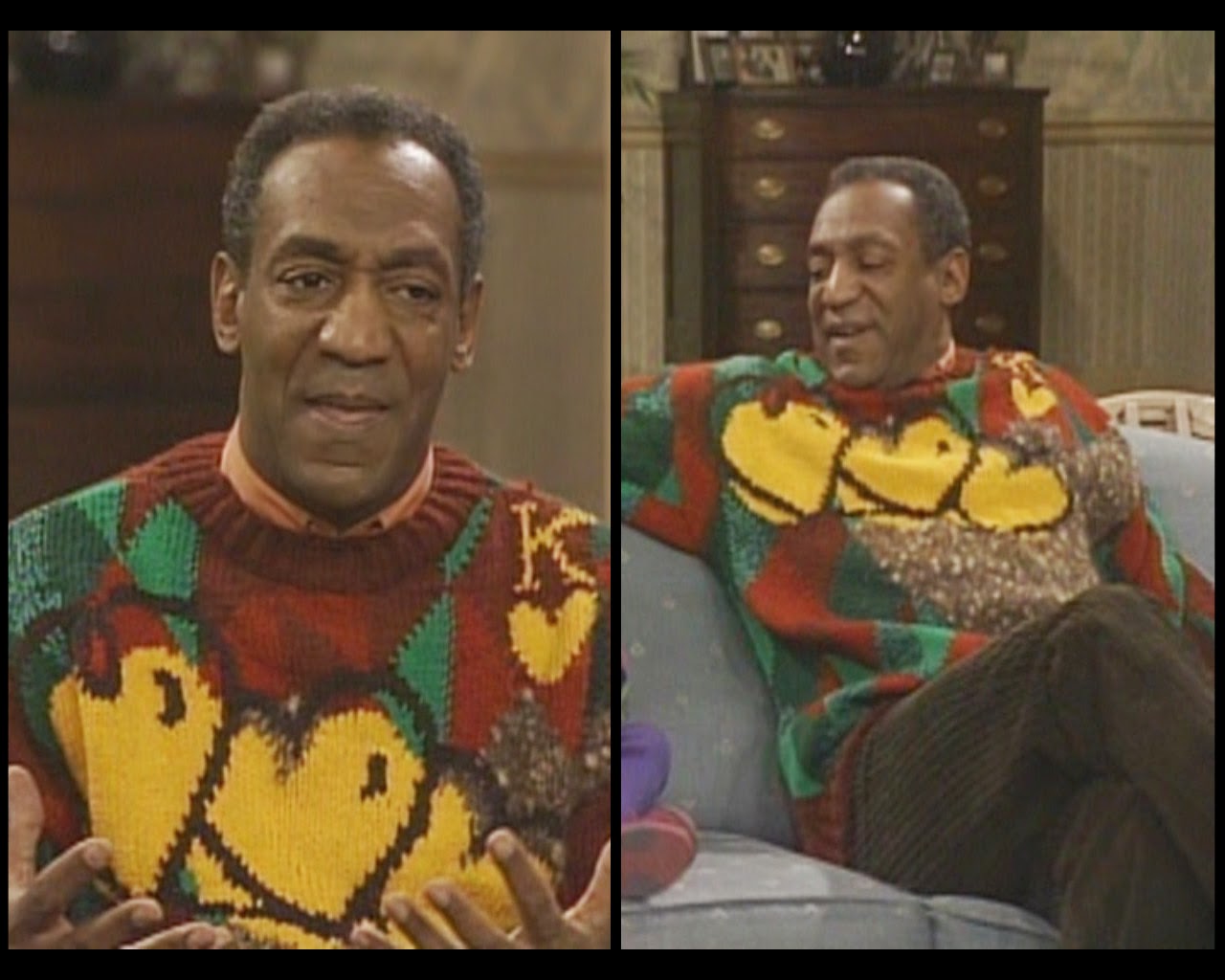 The K stands for... something, I'm sure.

For his second day, he facilitates the romantic shopping process by wearing a sweater with giant yellow hearts on it. I'm not into the obvious symbolism, and in terms of fashion, this is of course a piece that only looks good on Bill Cosby. In particular I'm squeamish around bright red and bright green being used together prominently, because there's such a strong Christmas association there and it's hard to employ those hues outside that context. Nice work with that salmon collar, though. The brown corduroys with the thick welt are also great. 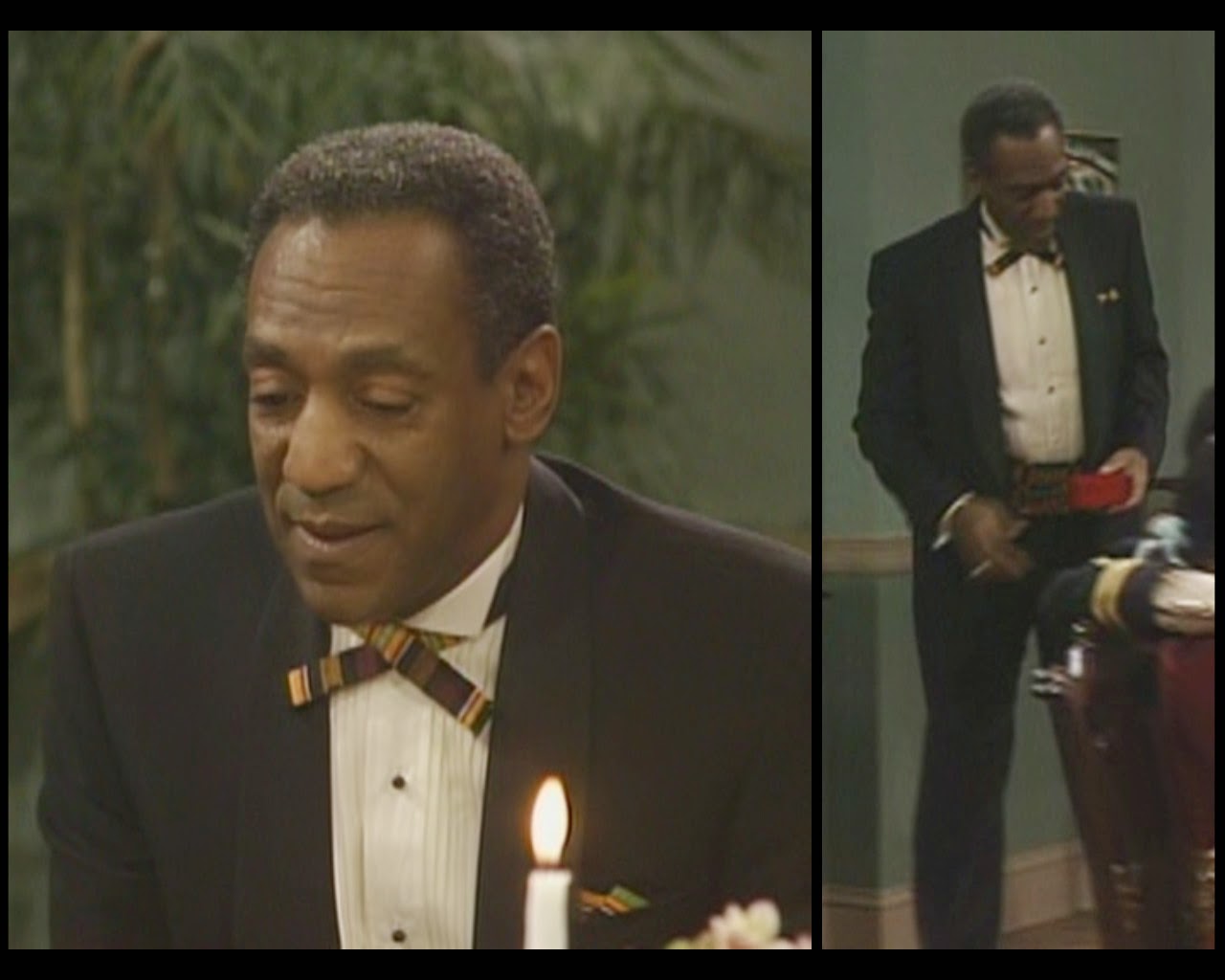 Everyone looks good in a tux.

To close, I'll leave you with a brief, blurry video of Cliff presenting his gift to Clair. Her enunciation of "tacky" (that adds extra syllables and a full-on H sound) is easily one of the best single words ever spoken on television. Enjoy.