OK, let's get this out of the way: it's after 3:00am and I'm more than a little drunk. We can consider this an experiment. My hypothesis: these circumstances will not drastically affect the quality of my writing. (Edit: I fell asleep in the middle of the entry and am finishing up after too few hours of sleep.)

But back to business. This week, Rudy slouches on her duties as the representative female tap dancer in her class. She's been assigned to perform alongside a trained tapper, and rather than try and fail, she's opting to quit while she's behind. I know the feeling. Of course, her teacher and parents are having none of that. Mostly, the whole episode is an excuse for Bill Cosby to do several minutes of fake dancing. To be fair, it's a hysterical bit. 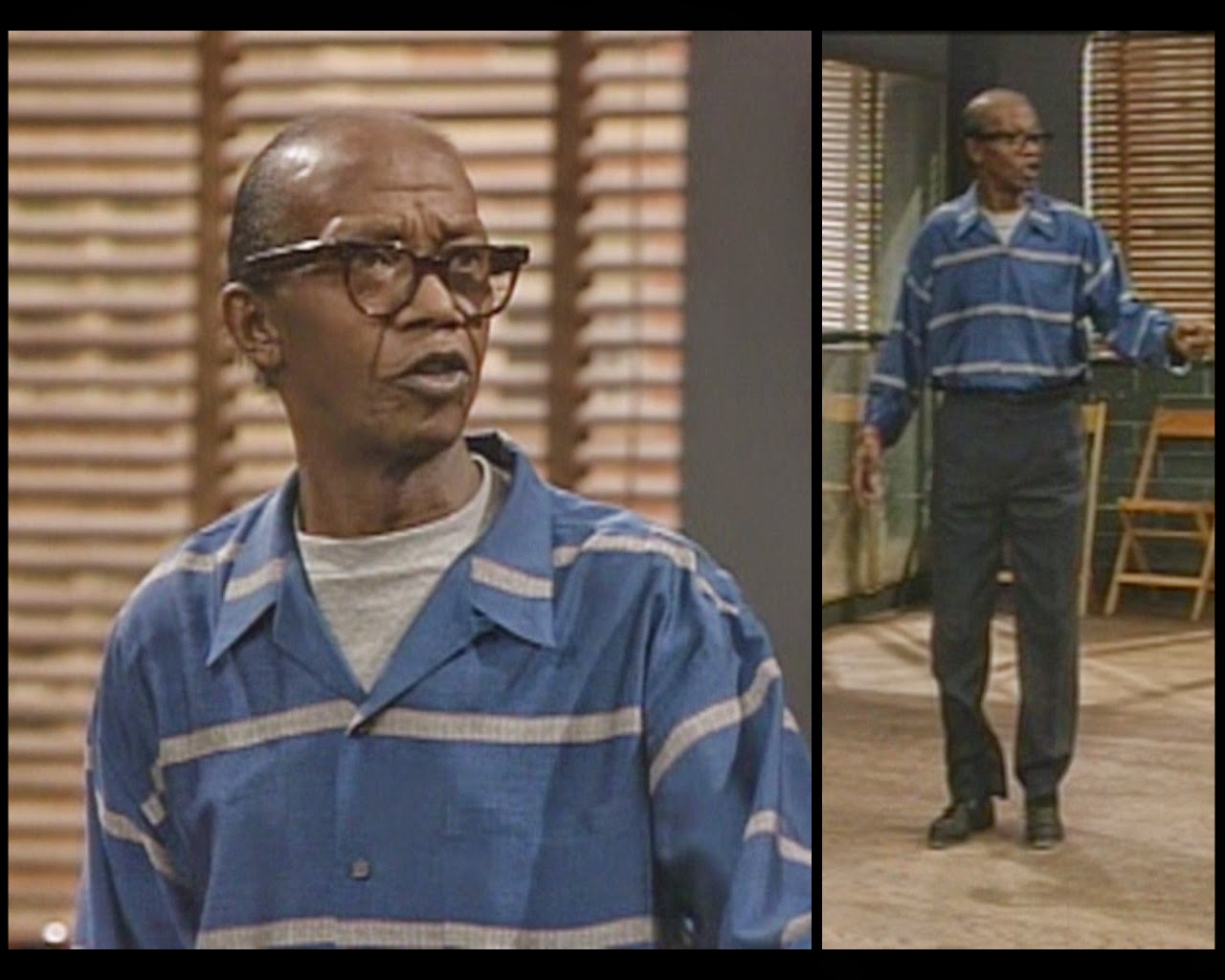 The episode gets its name from the participation of Howard "Sandman" Sims, a renowned tap dancer who plays himself as the owner of the dance studio where Rudy studies. He's not dressed like anything special, so just focus on his dance moves. He could have gotten these clothes out of a lost and found bin. 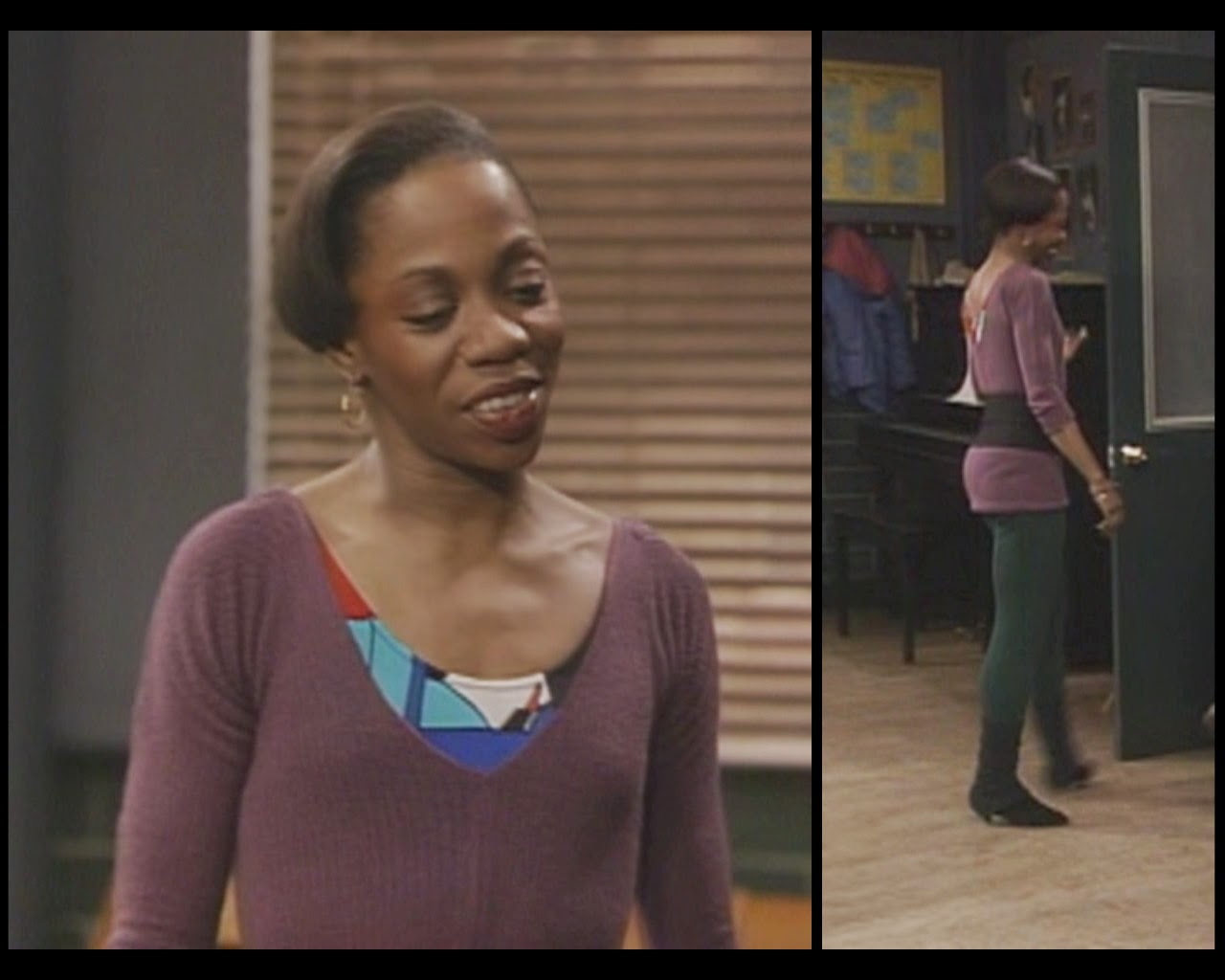 And yet we never see her actually dance.

Shirley Black-Brown plays Mrs. Mitchell, the choreographer who is helping Rudy and her partner with their act. She wears workout clothes. I should note that she, Mr. Sims, and some other characters appear in a montage later in the episode, and I neglected to include every outfit depicted because mostly they're just in dance gear, and there are already a lot of looks to get through without including the stuff that's only shown for a few frames. Point is: this lady is geared up for rehearsal, and I'm not going to pretend like this is a runway situation. 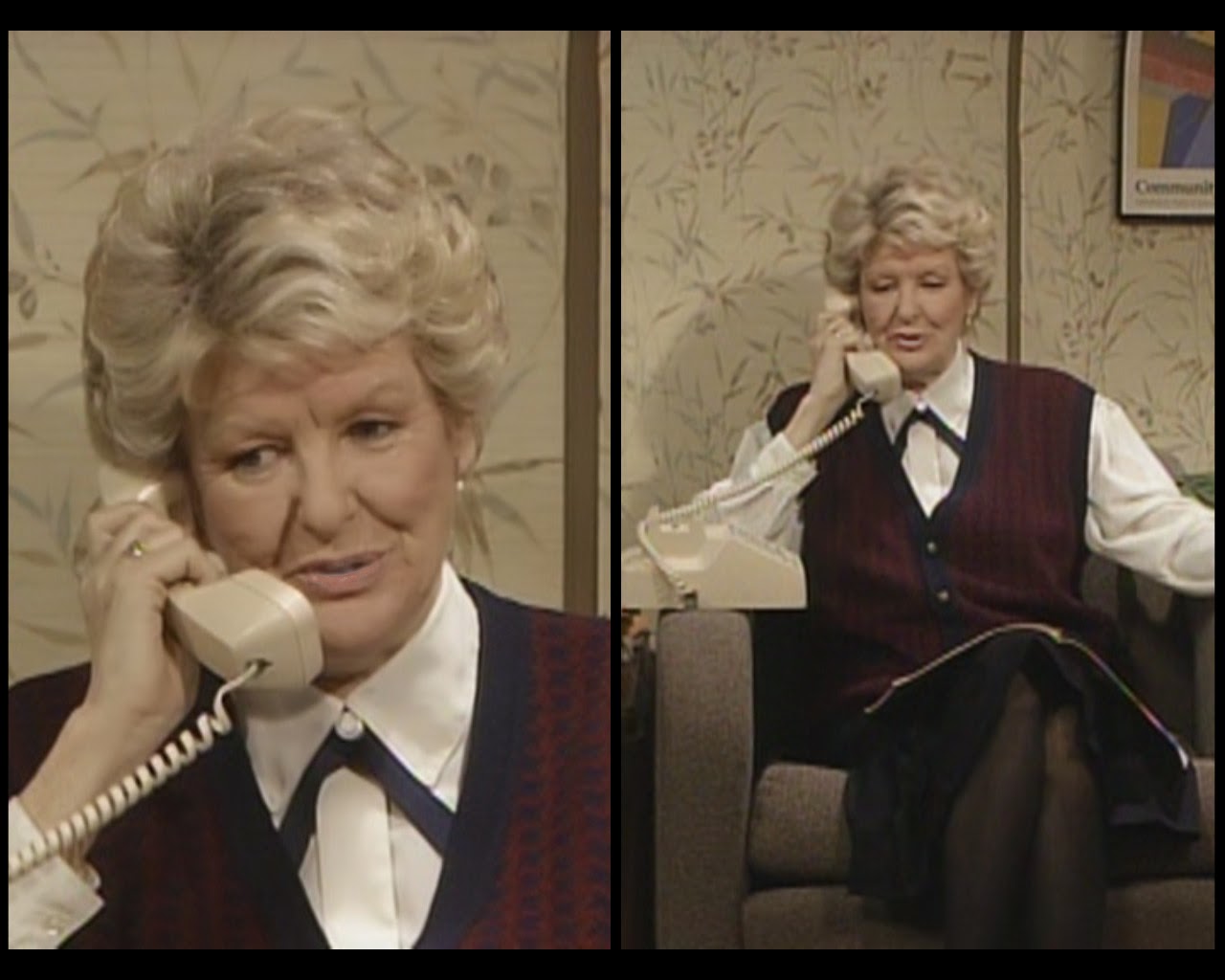 Mrs. McGee returns for this story in two brief segments, both of which involve her seated in a teacher's lounge or some similar location, talking on the phone. Her overall aesthetic has not changed: white shirt, sweater vest with shoulder pads, crossover tie, below-the-knee skirt. Something about the color combination of this one says "Marriott Front Desk" to me, but it's no better or worse than any of her other offerings. 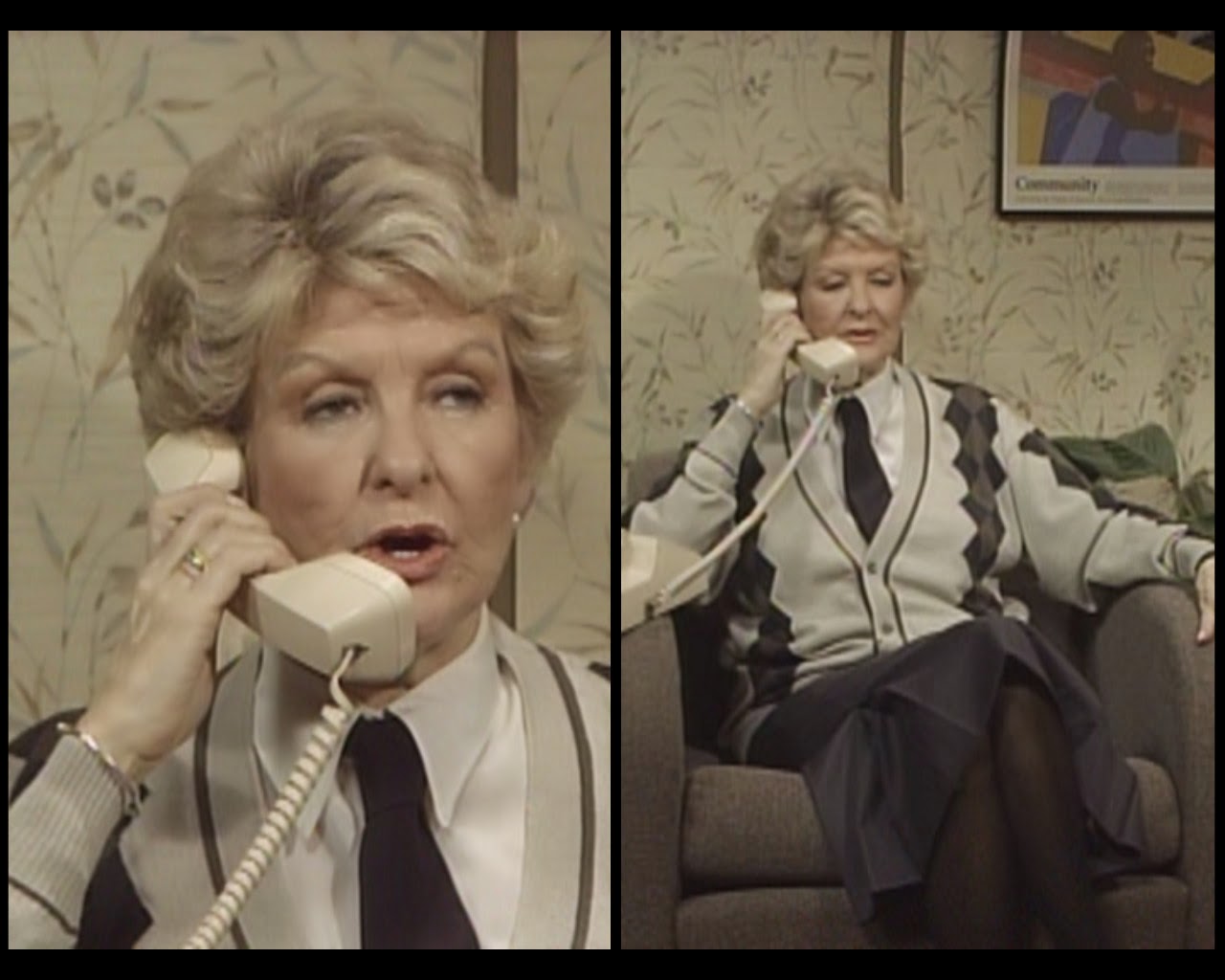 I like her in a standard men's tie. And a lighter skirt. And a cardigan. I like all of this, really. Also, she does better without the giant glasses from previous episodes. Overall: improvement. 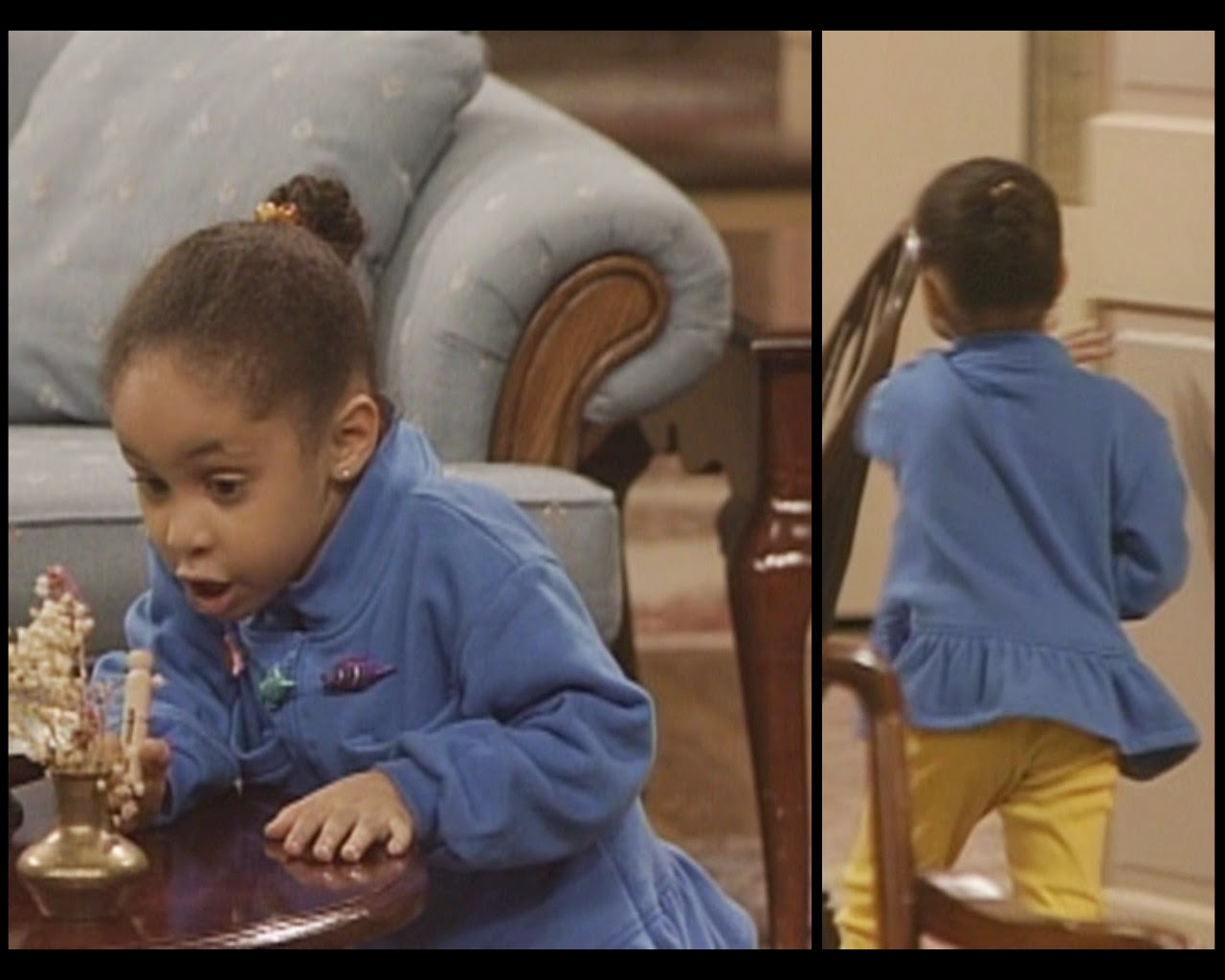 Typical: you buy her dolls, she plays with clothespins.

I had assumed that Olivia's episode #6.5 shirt had fish built into it, but this outfit suggests otherwise. The blue top is a new garment, but those are the same red, green, and purple sea creatures swimming across her chest. Interesting. 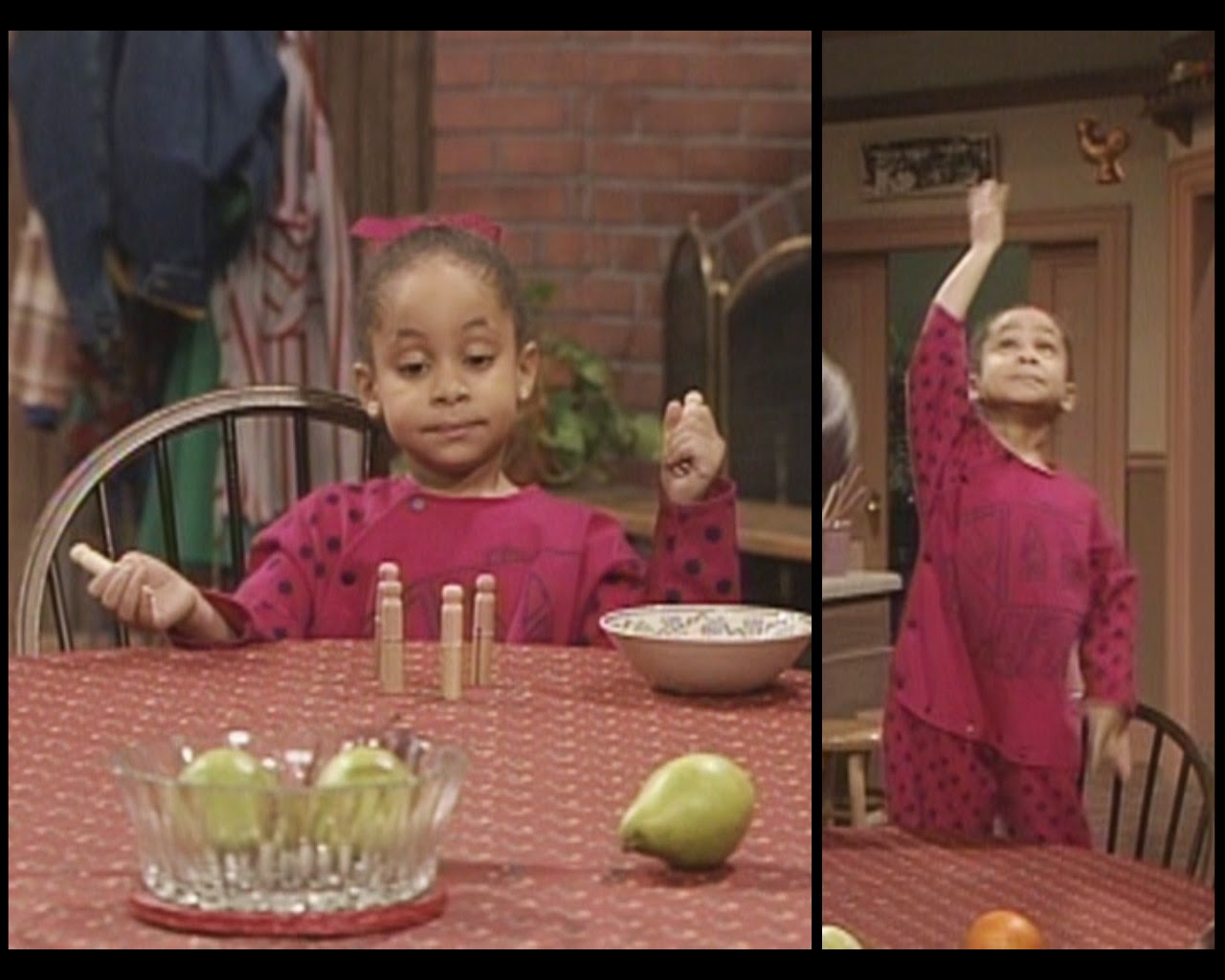 This lok has a similar vibe to her birthday creation: lots of rich pink and volume. I'll give Olivia credit for having a clear point of view. She's really into bold colors and exaggerated silhouettes. In some ways, she has a more consistent stylistic perspective than anyone else on the show. 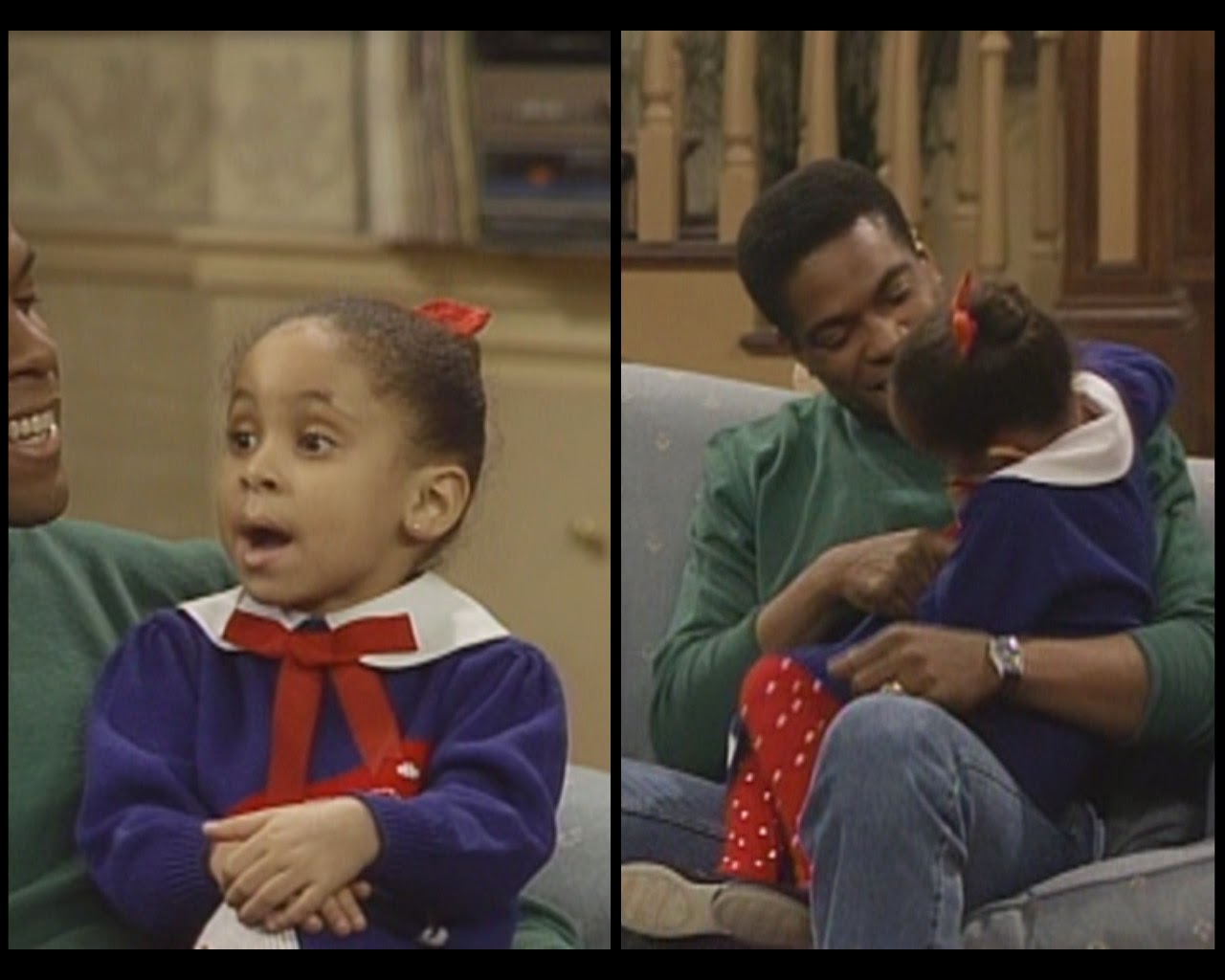 It's tough to pull off a nautical look without coming across as costumey, and this is one of those instances where the getup makes you look like Daffy Duck. I dig the polka dot tights though. 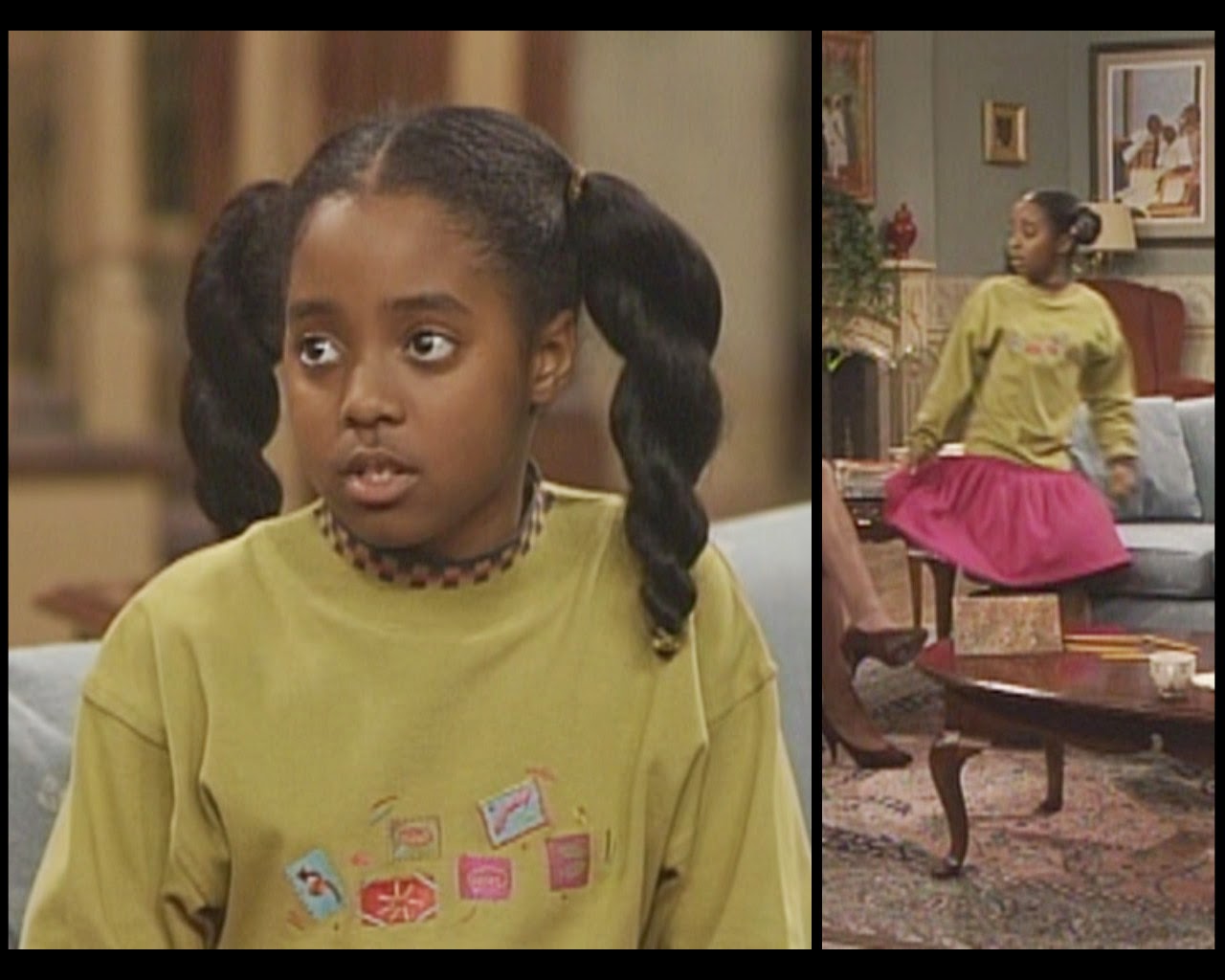 Repeats make my life easier even when they're ugly.

Rudy repeats her episode #6.6 outfit, minus the leggings. It's nice to see that the skirt catches some real air when she turns around. 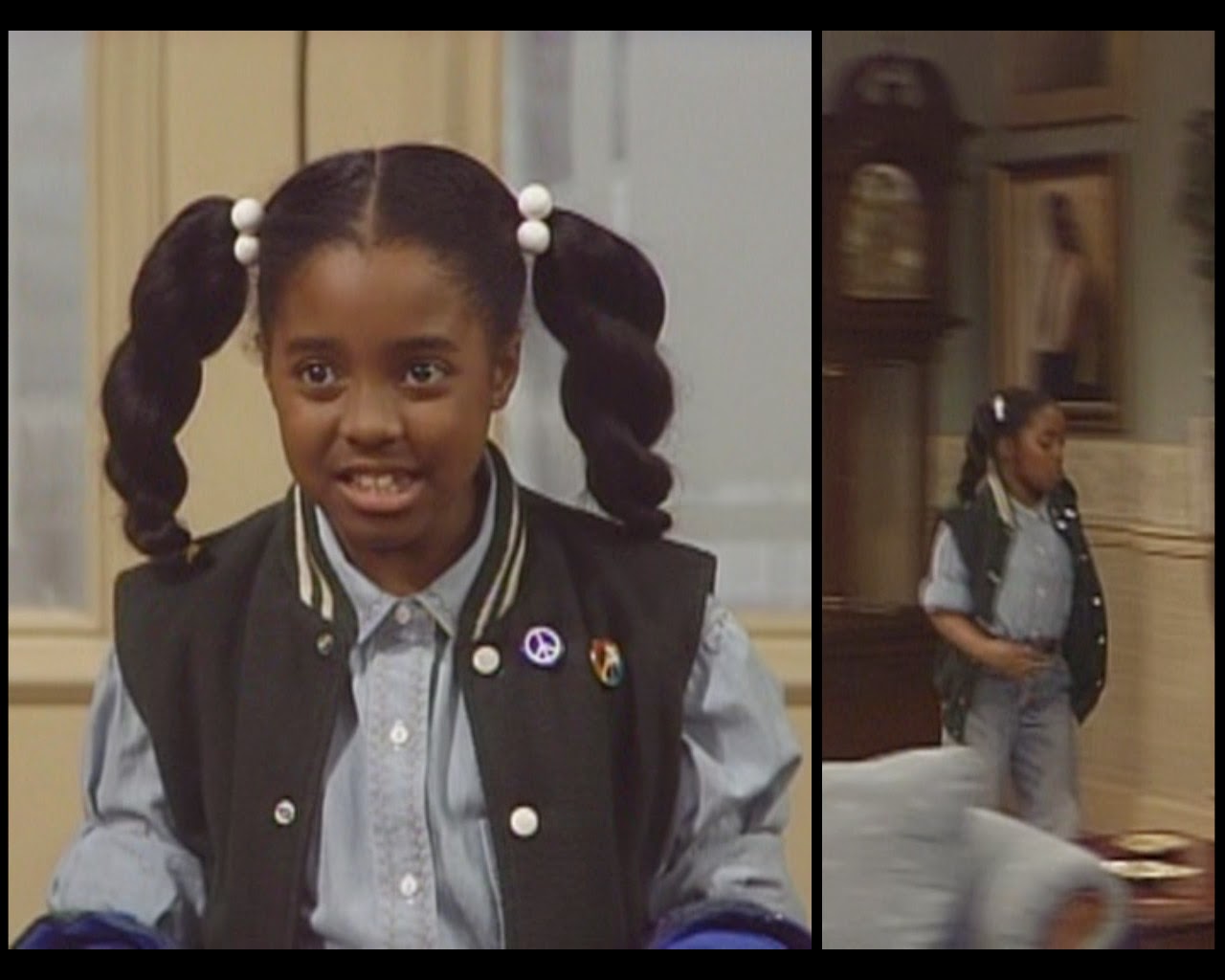 I have to advise against the denim shirt with jeans. It's just not a great look. She's also going nowhere fast with that vest. (It's not intended as outerwear because she puts a coat on over it.) 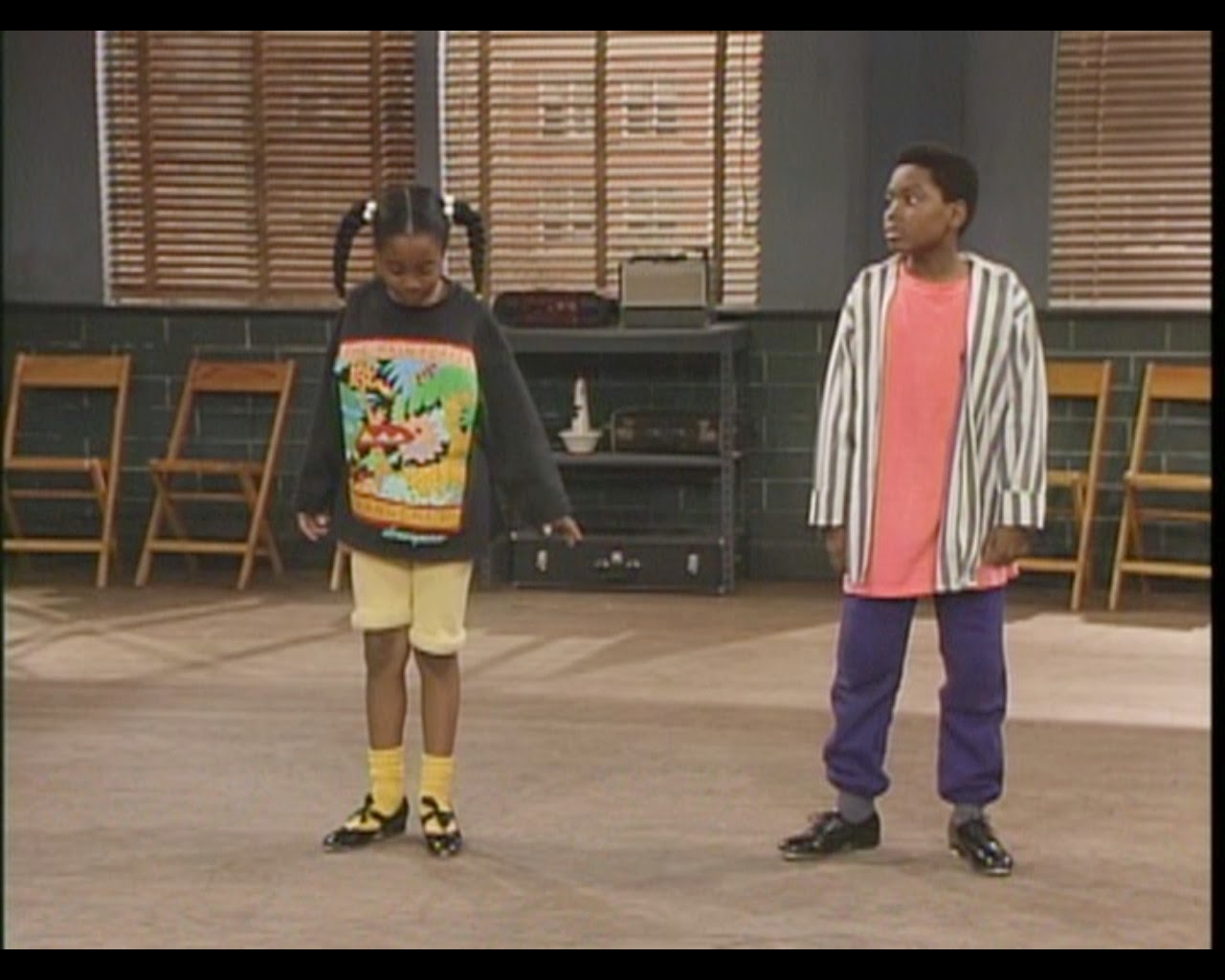 Your parents spent a lot of money on those tap shoes, kids.

Rudy's episode #6.13 outfit has been demoted to workout clothes. It's probably for the best. Oh, and that's Z. Wright as her dance partner George. I didn't give him a separate section because of how viscerally I loathe that outfit. I don't know why; my reaction is clearly out of scale with its level of awfulness. It's objectively not good, but it's not as bad as my brain thinks it is. I understand, I just can't change my feelings on this one. 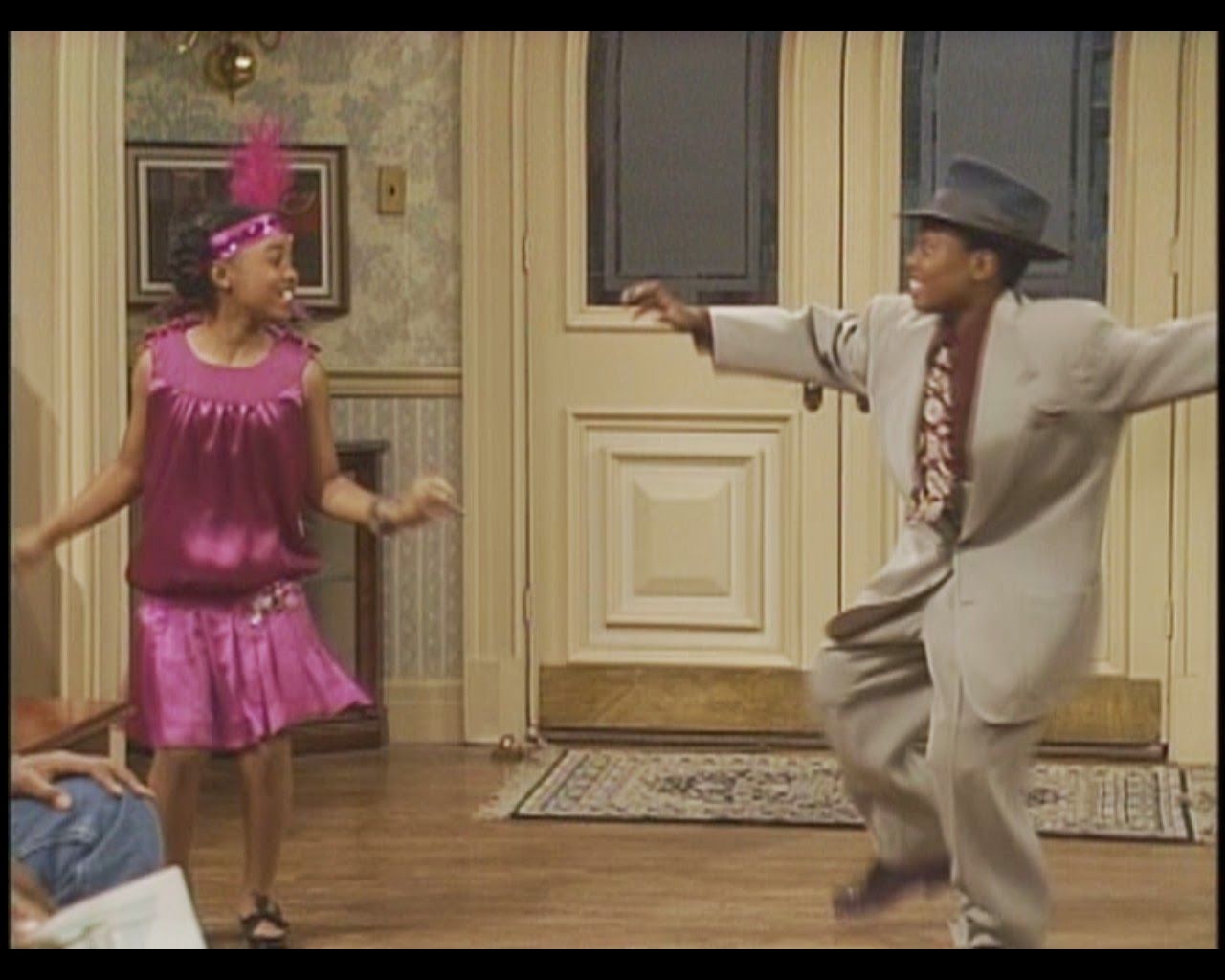 You're going to ruin that nice hardwood floor.

The duo next appears to do their dance in costume. They do OK, but I wouldn't have minded some fringe from Rudy, and his zoot suit could have been a bolder color. Then again, it's not my place to ask parents to buy their children ultra-fabulous creations that will only be worn once. These are frankly nicer than the junk-in-a-bag Halloween store castoffs I would have bought my kids. (Disclaimer: I do not have kids.) 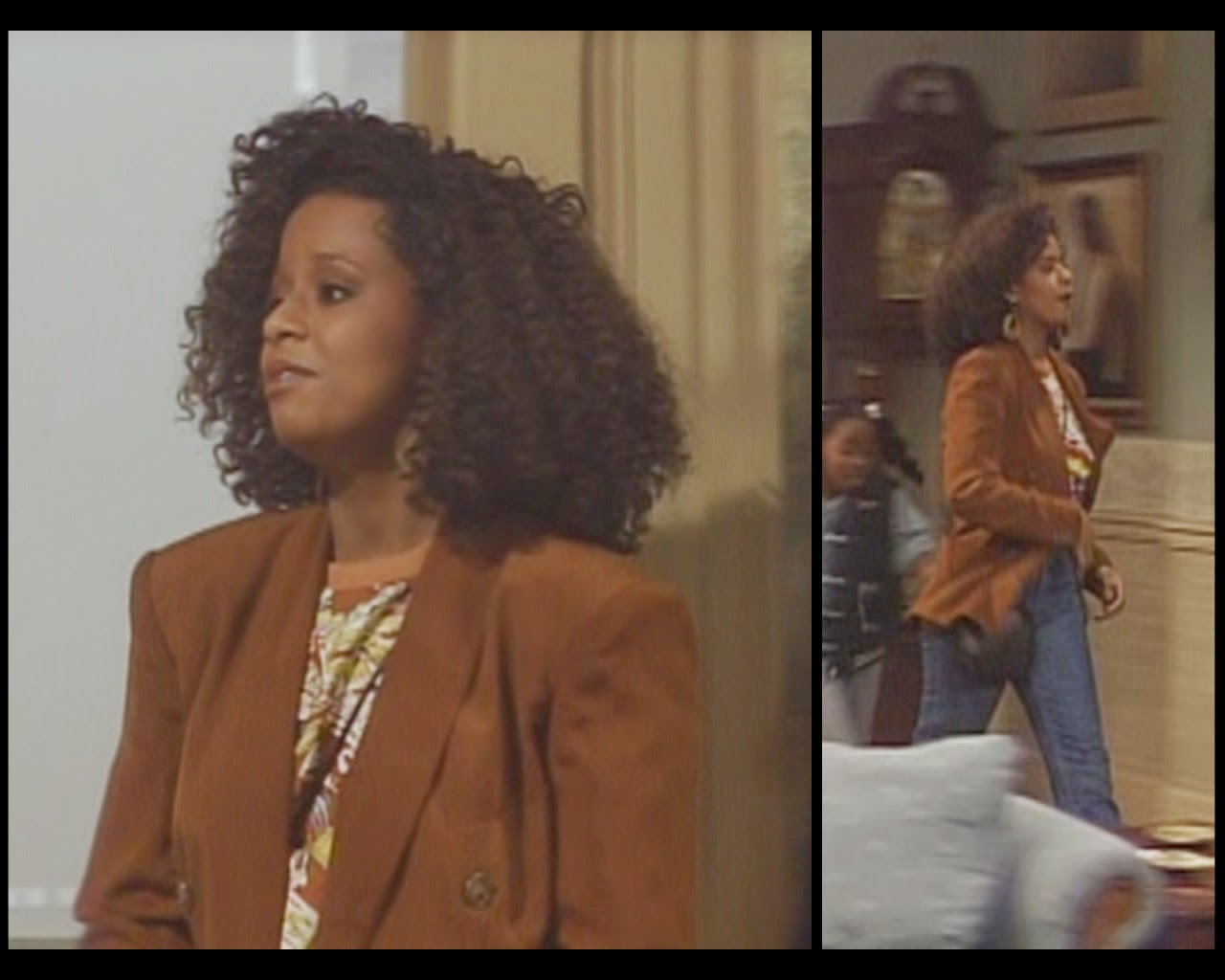 She's becoming one of my favorites.

Vanessa starts off in her episode #6.15 coat, which looks just delicious over jeans and a printed t-shirt. I'm usually firmly against shoulder pads, but here they fit. I can't help but adore her retro chic vibe even though I know she wasn't retro when she was wearing it. 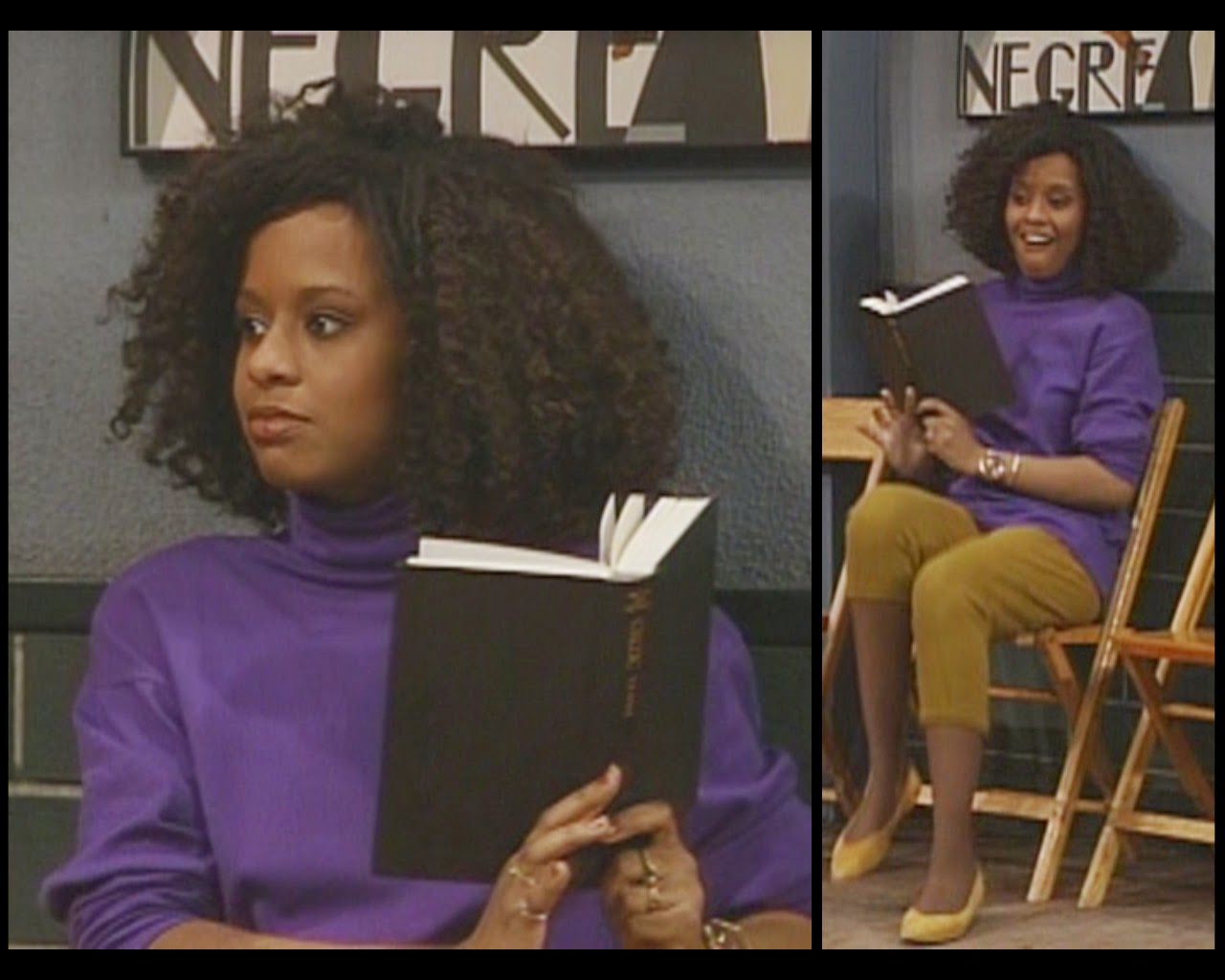 Even this isn't that bad.

This is a repeat from episode #6.3. I like that the previous day, Cliff encouraged her to read more, and here she is following through on that one. 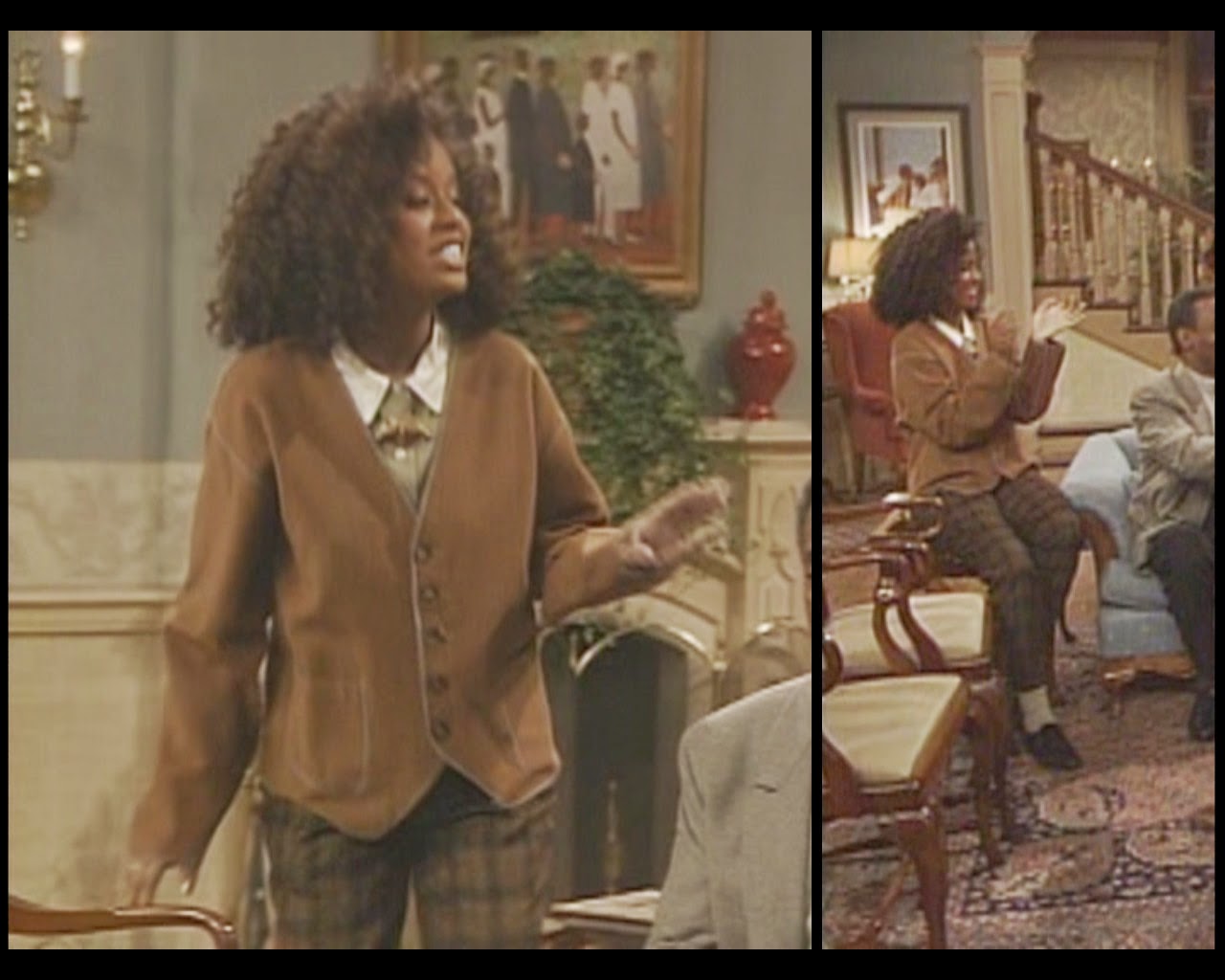 And you wrecked it.

The top half of this look is from episode #6.4, though she's swapped the previous pants for slimmer plaid trousers. While I like the new pants on their own, they kind of make me like the whole outfit less somehow. I think they accentuate how poorly that cardigan fits her. 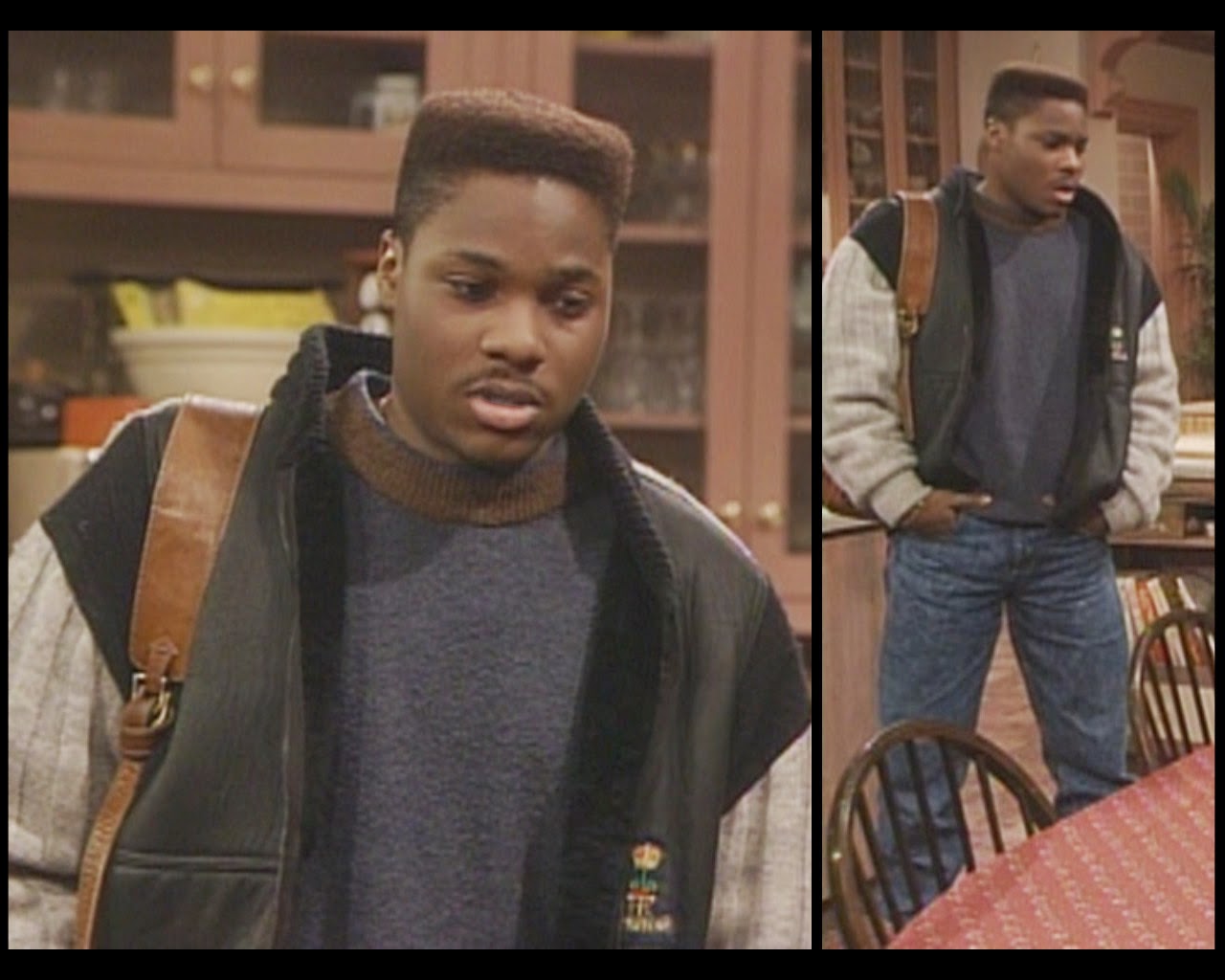 This is Theo's episode #5.12 sweater. He's really into collars that might be a mock turtleneck if you squint. 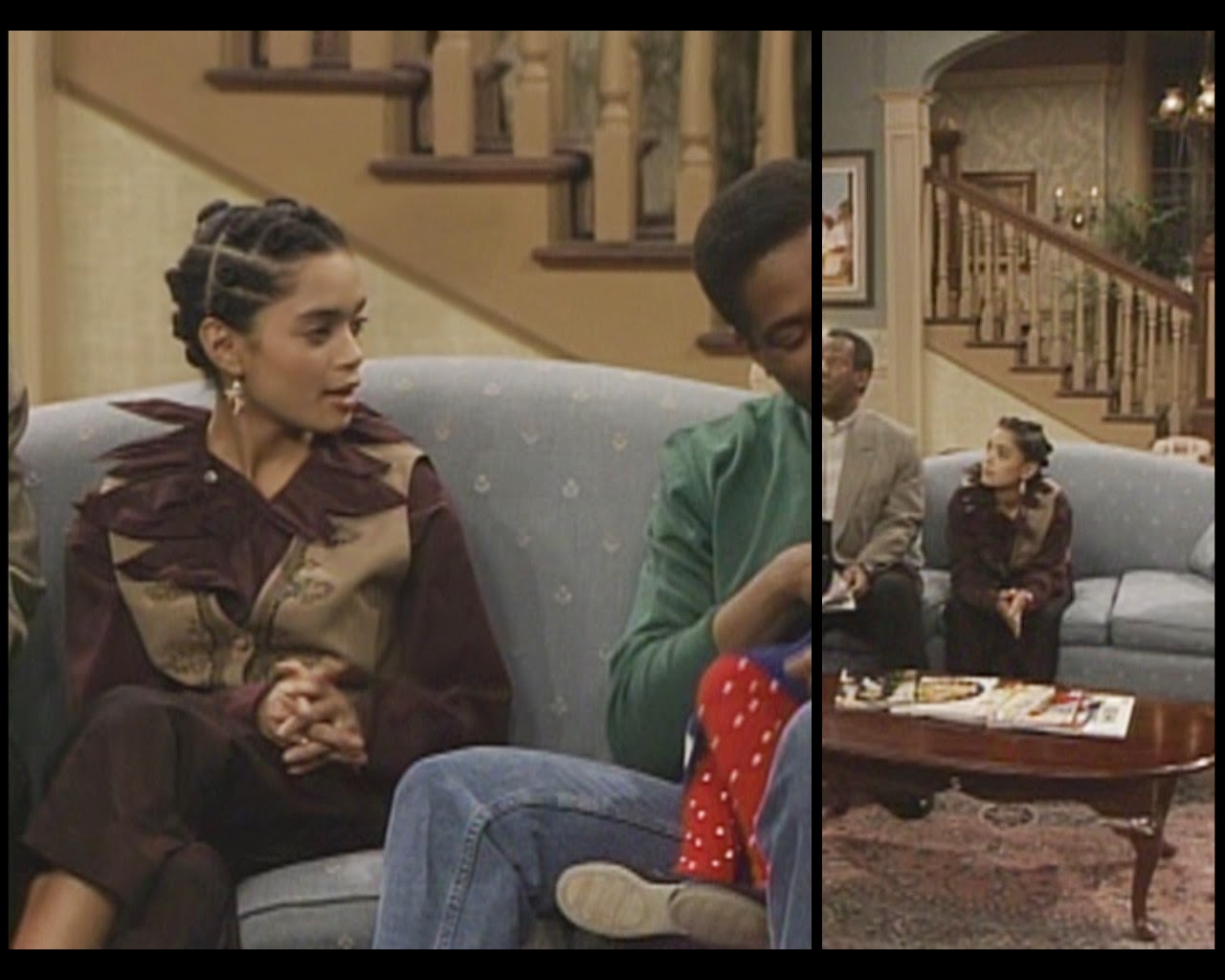 Angelina: out. Lisa: in.

Denise is around for too short a time this week. She has stolen Vanessa's episode #6.11 vest and paired it with some sort of supervillain blouse and matching-ish pants. I'm forgiving the poorly-paired aubergine shades because that Maleficent-goes-business-casual collar is sensational. I hope we soon get whole shows dedicated to everyone in Brooklyn stopping to tell her how great her top looks. 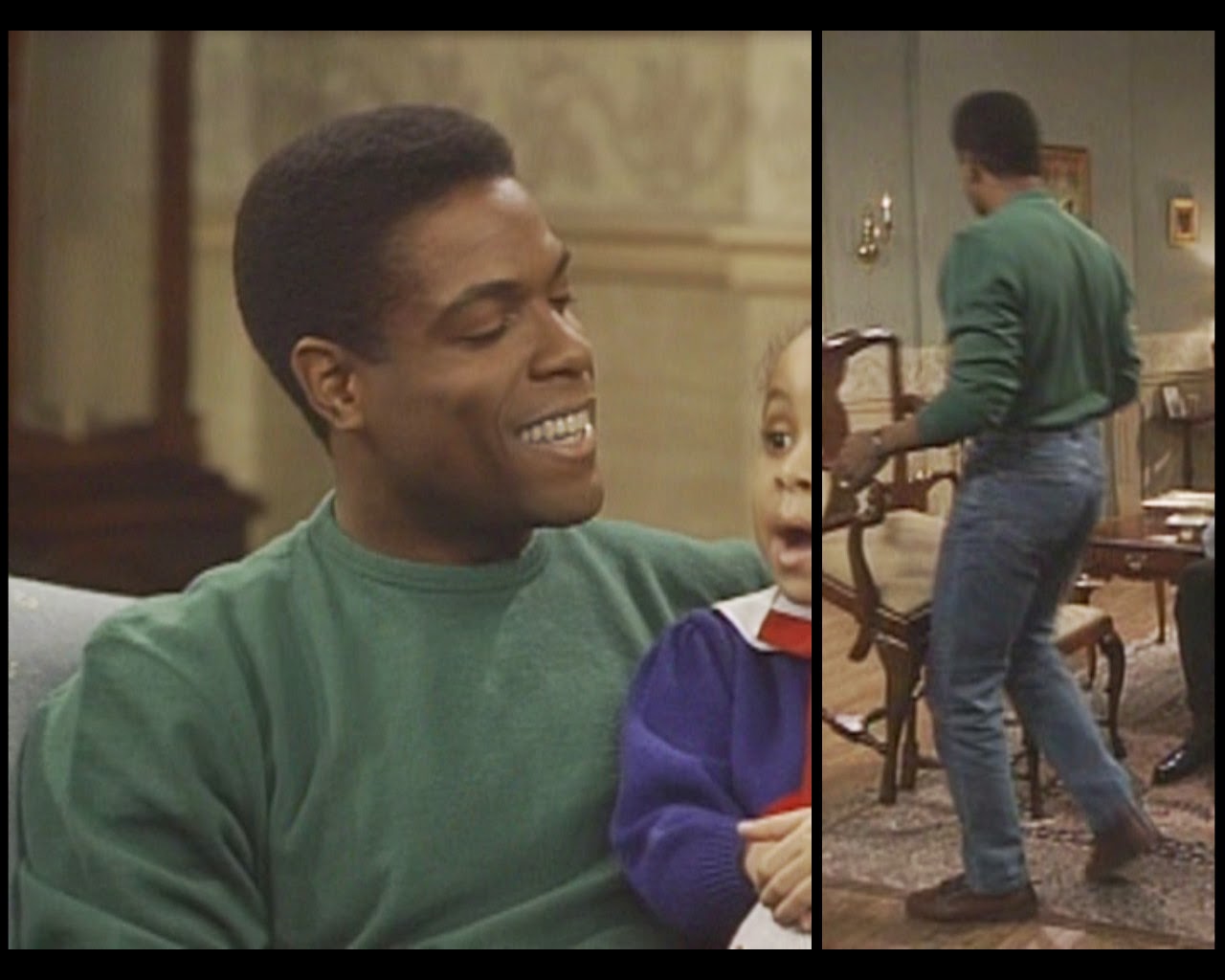 Martin, on the other hand, is committed to those mom jeans. They're pulled up so high, which he makes sure we notice because he tucks his shirt into them. Without a belt, mind you. The green is nice on him, I guess, but buy the man some new jeans already! 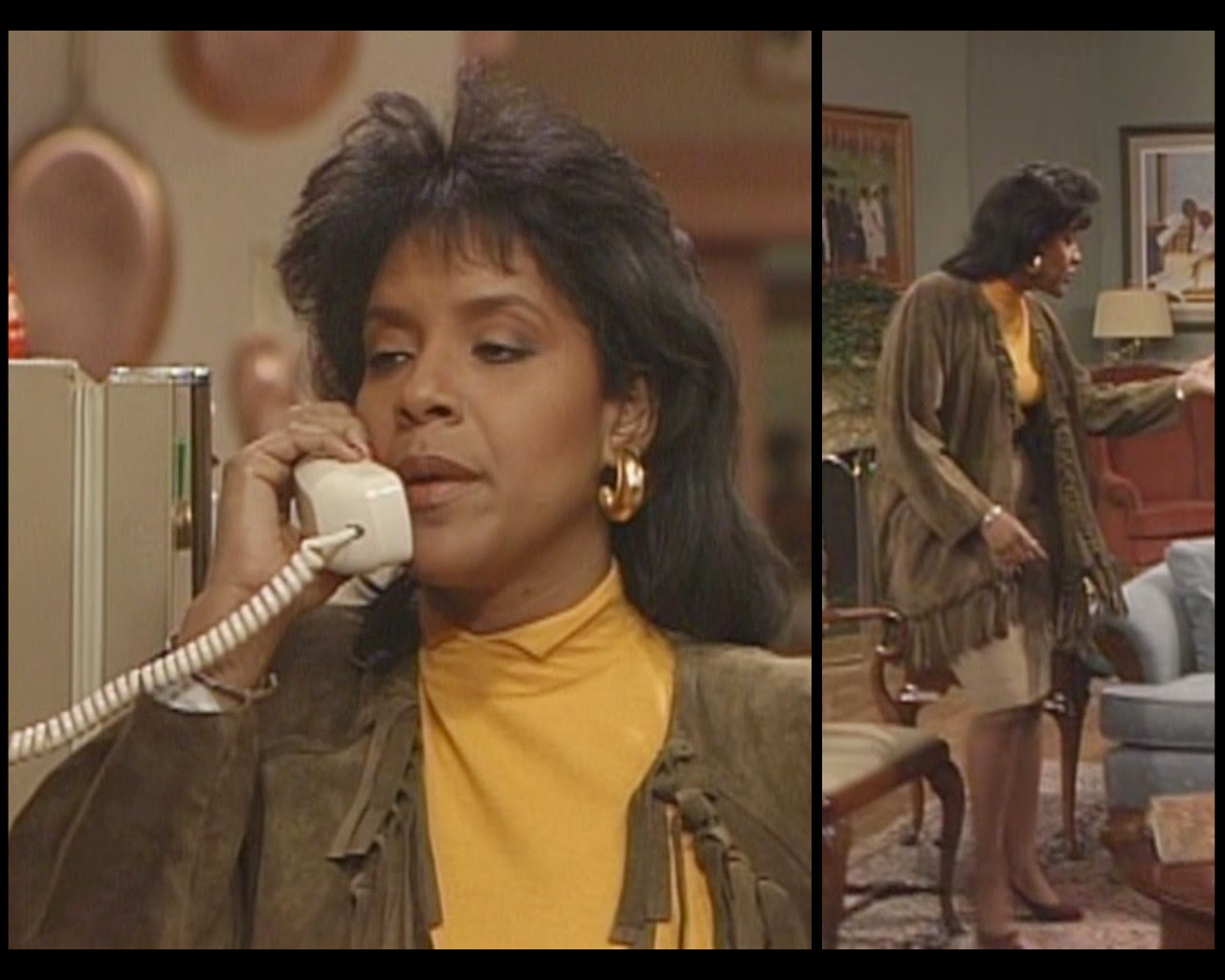 Her phone faces are always the best faces.

I know Clair is trying, but I'm not sure I can support this split turtleneck collar. Otherwise, I'm completely into this situation. The high skirt and sunny blouse are great on their own, but she kicks it into high gear with this fringed top layer. You can't see it in a still frame, but it moves really well; the lower part is cut in this wonderful, graceful curve, and there's a heaviness to it. Something about this coat makes me think I should hate it, but I don't at all. 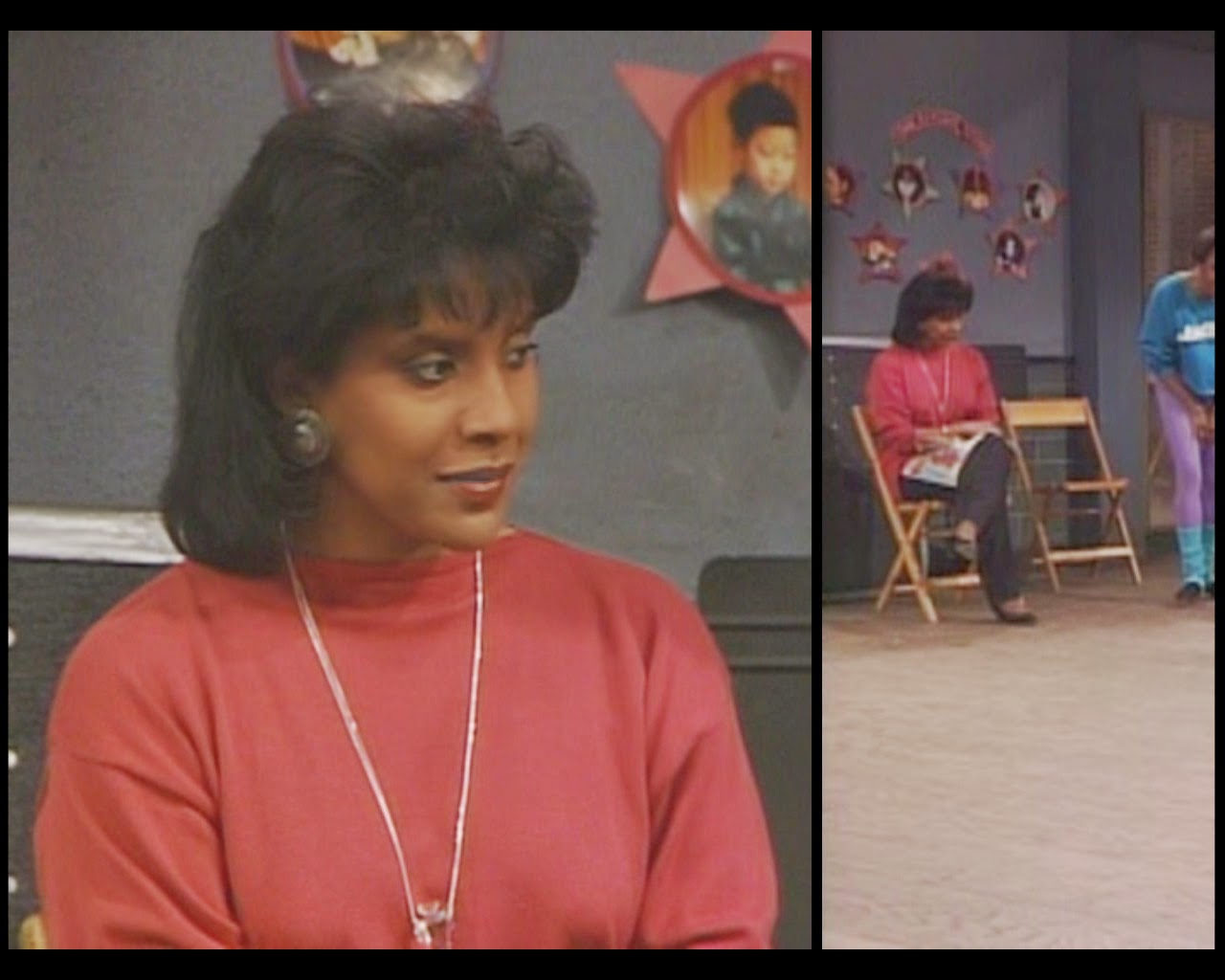 Really, all her faces.

This appears to be Clair's episode #4.21 shirt paired with full-length black trousers rather than the cropped pants from last time. The long necklace is a good touch. 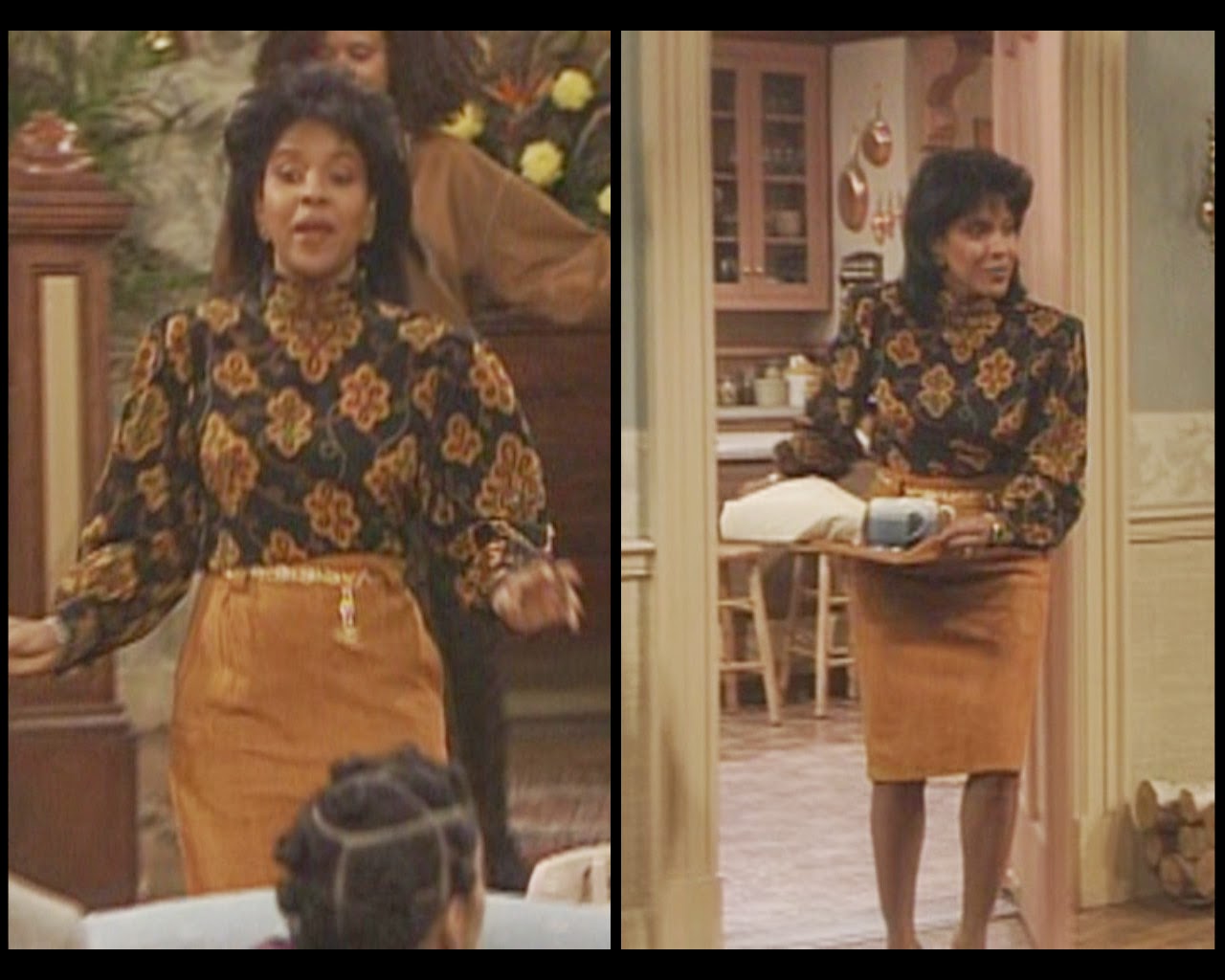 She's worn this blouse a couple times before (initially in episode #5.3), and it's always divine, but the matching goldenrod skirt takes it to the next level. Unfortunately, that sloppy belt undoes some of the positive impact. It's too flimsy. Otherwise: perfection. 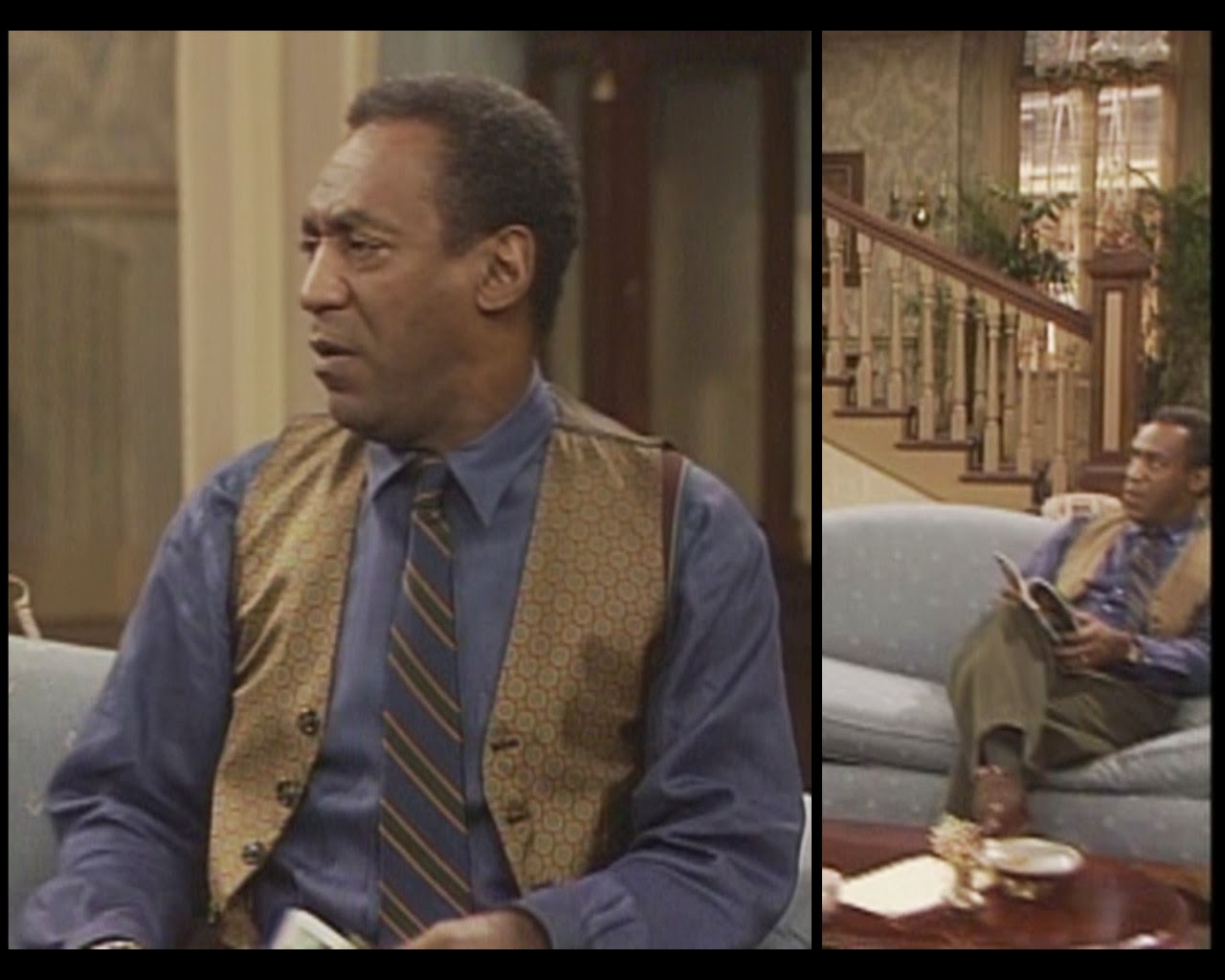 He's got some good face, too, obviously.

Cliff looks wonderful in his episode #6.17 blue shirt, but he does his best to obscure that fact by pairing it with this vest and those olive pants. And that tie. I can't see much of them, but the suspenders are probably ugly, too. There's a bunch going wrong here. It's a classic case of fantastic individual items becoming crappy when coordinated with each other poorly. 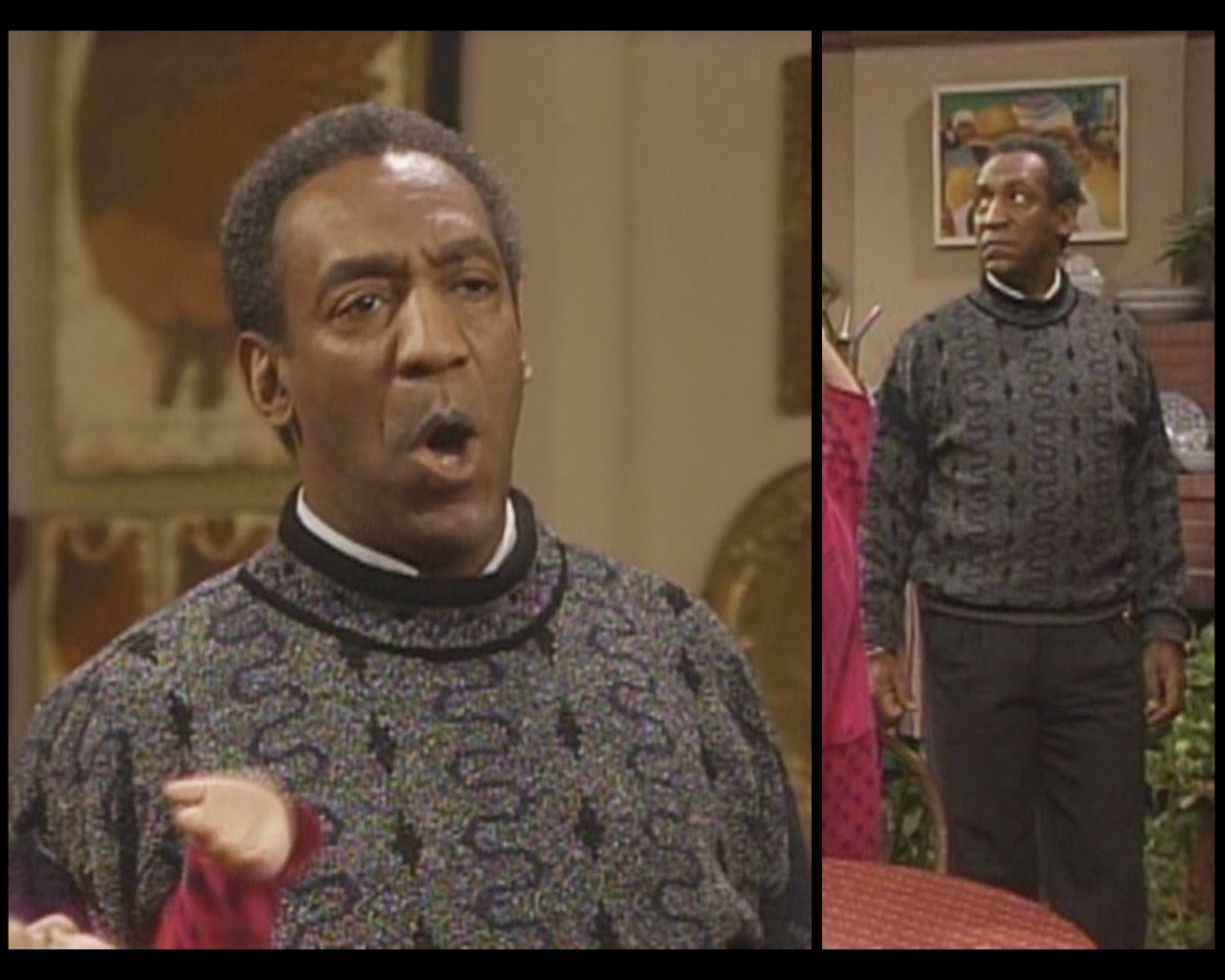 In fact, it's hard sometimes to find him looking normal.

Remember episode #5.11? This outfit does. 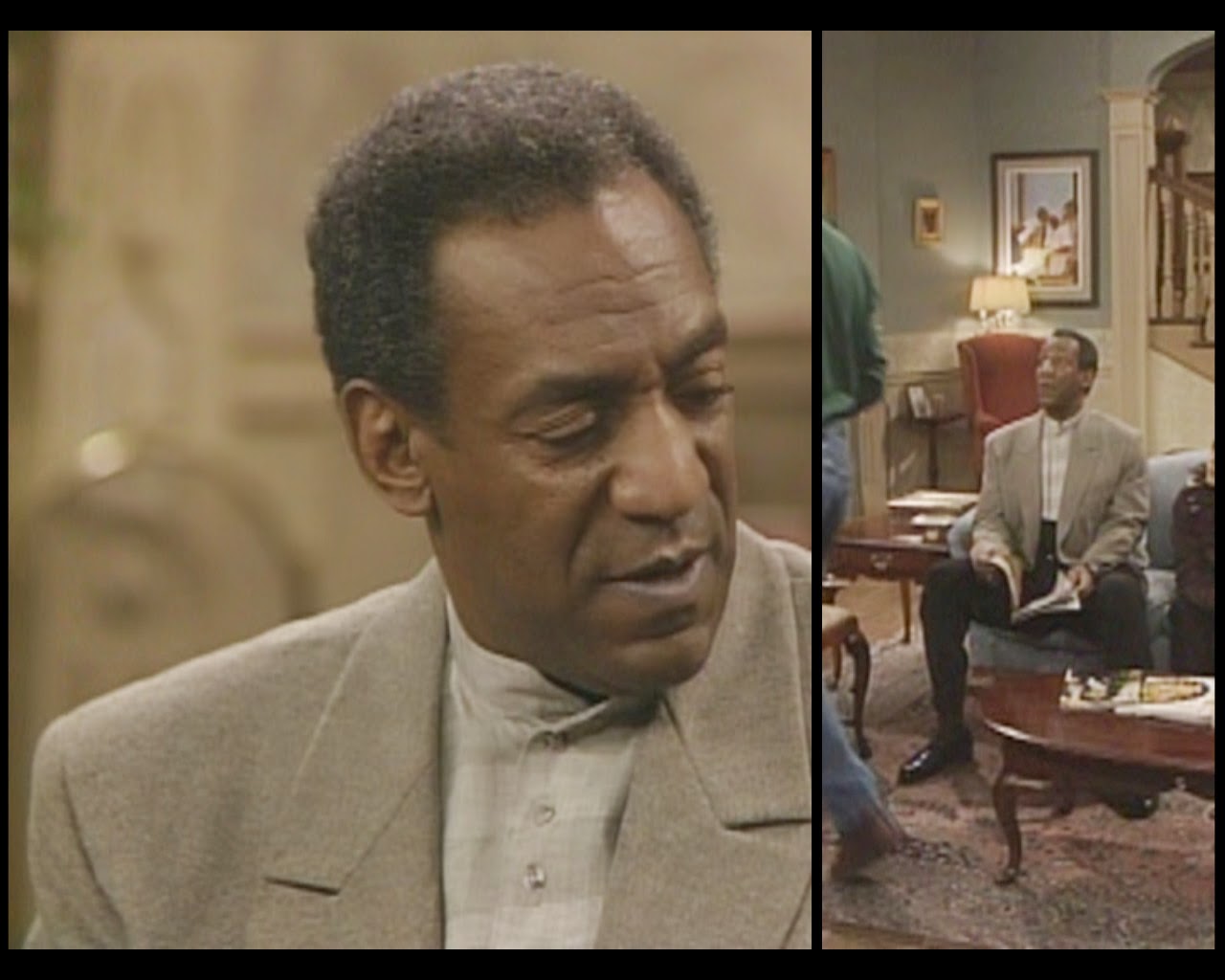 It's weird to me that they all dressed up for this living room rehearsal.

Cliff gets dressed up to watch Rudy's performance. The width of the shoulders on this jacket is out of control. Also, while I usually love a non-standard collar, I'm not thrilled with this one. Let's see how things look once the coat is off. 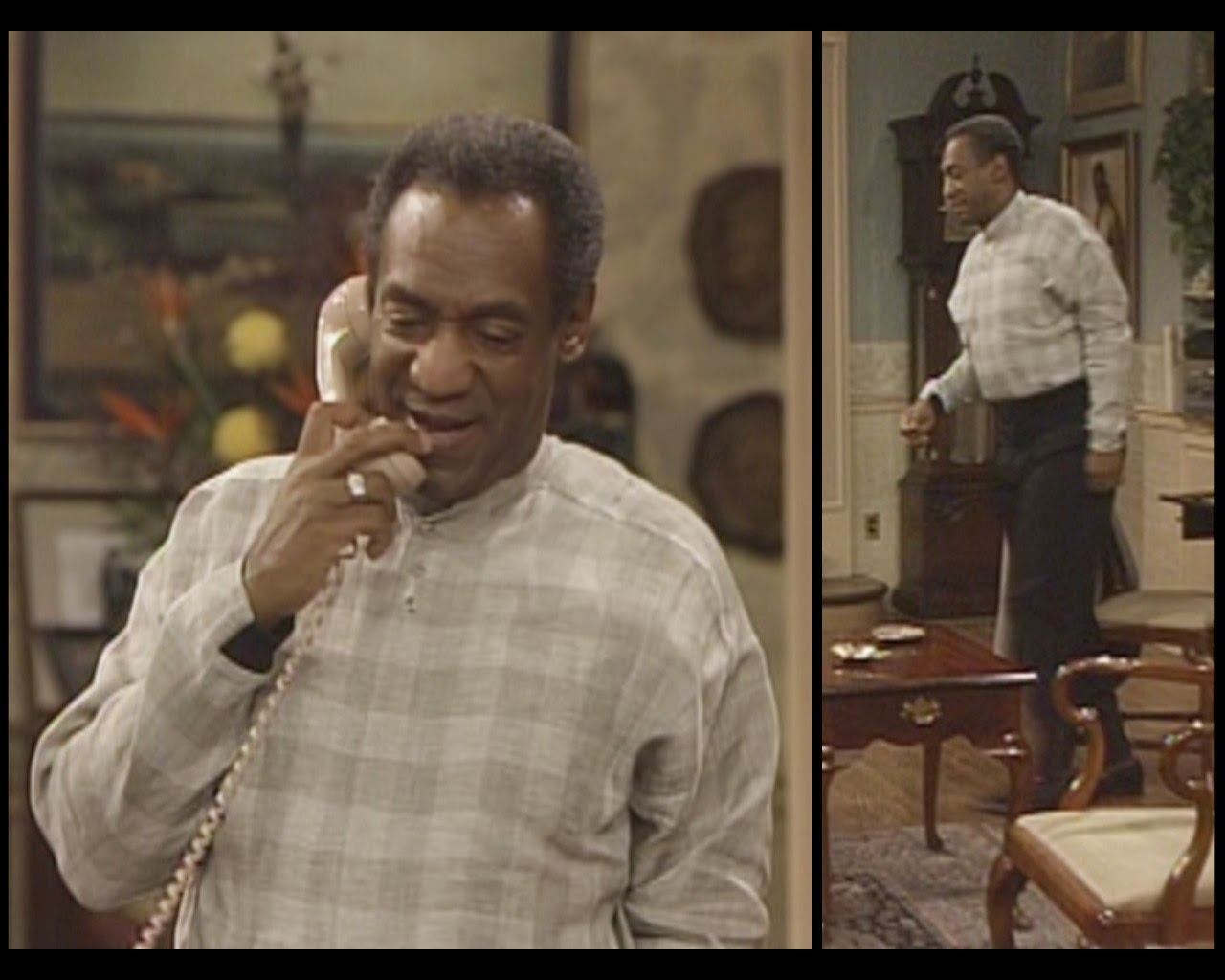 That black square on his collar really bugs me.

Yeah, this shirt is way too casual to be worn with a blazer and a cummerbund. (Is that a cummerbund? Or are his pants just like that? I feel as though I've wondered this before.)

Gosh, that was a lot. I'm frankly OK with the episodes where the Huxtables fix everything in a day; my life is easier when theirs is.
Posted by Unknown at 9:36 AM