Season 6, Episode 18: Rudy's Walk on the Wild Side

Though still too old to be the cute one, Rudy is also too young to be the rebellious one. Theo and Vanessa are much better equipped to break rules in outlandish ways, but if we don't figure out something for their younger sister to do, then we're going to have to pull a Denise and write her out of the show entirely. For now, the best the production team can muster is an episode in which Rudy steals $2.30 off the counter to buy a sweatshirt that lights up. Clair is extremely concerned as to where this money could have gone and only mildly imperious when her daughter confesses to the theft, largely because Rudy owned up quickly, paid the money back, and had nothing but a crappy broken sweatshirt to show for it. So I guess in summation: nothing really happened this week. 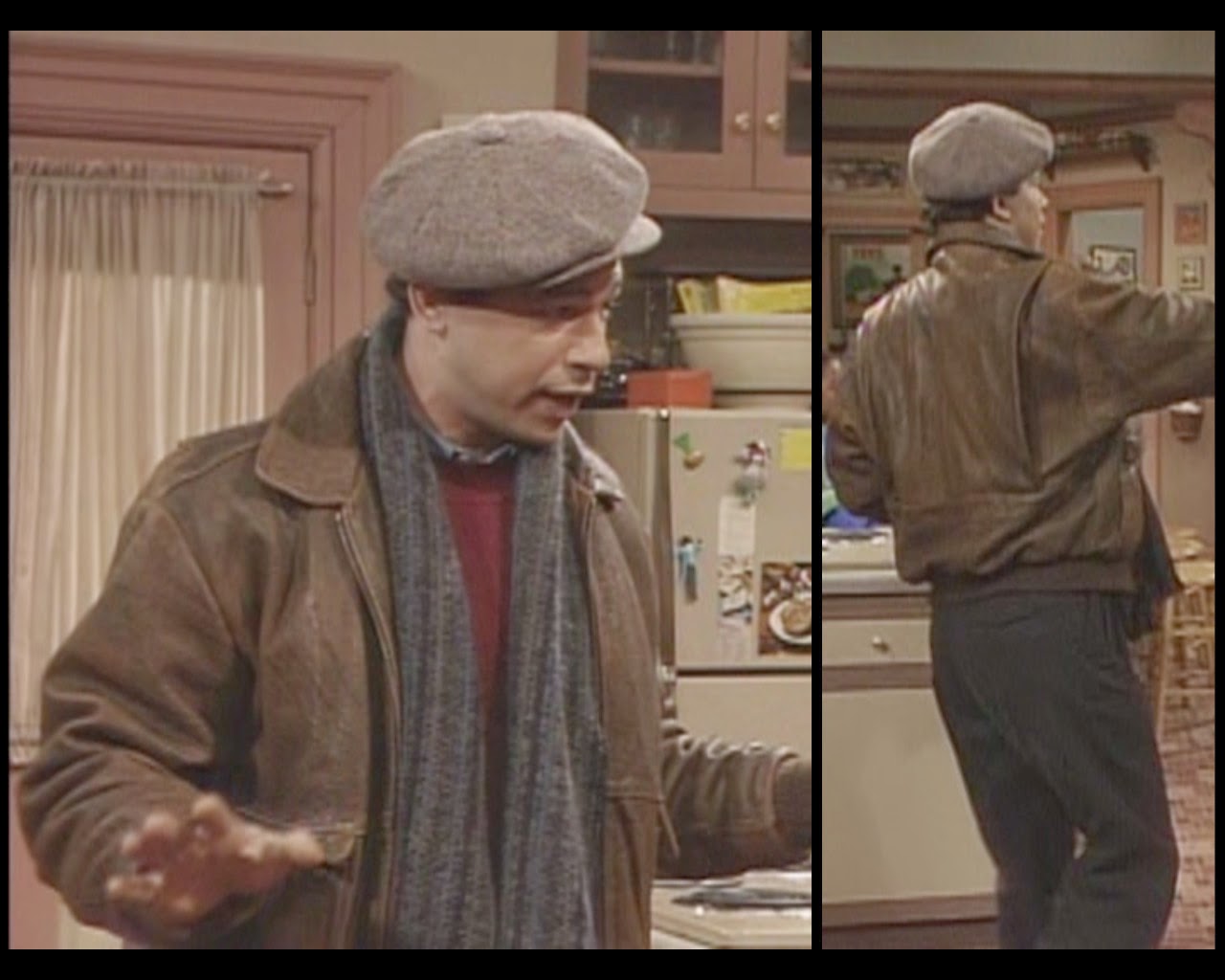 It all starts when Andy (Gilbert Cruz) comes over to deliver Clair's dry cleaning. She counted out exact change for him, which is honestly insulting because this man deserves a tip, rich lady. Also, when the amount on the counter is insufficient, they act like there's no more money anywhere else in the house. At no point is anyone like, "oh, I'll go to my wallet, which is full of cash because we are wealthy, and get three whole dollars to make up the difference." Anyway, Andy is dressed a lot like Cliff, so I guess the dry cleaning delivery business is good when people aren't short-changing you. 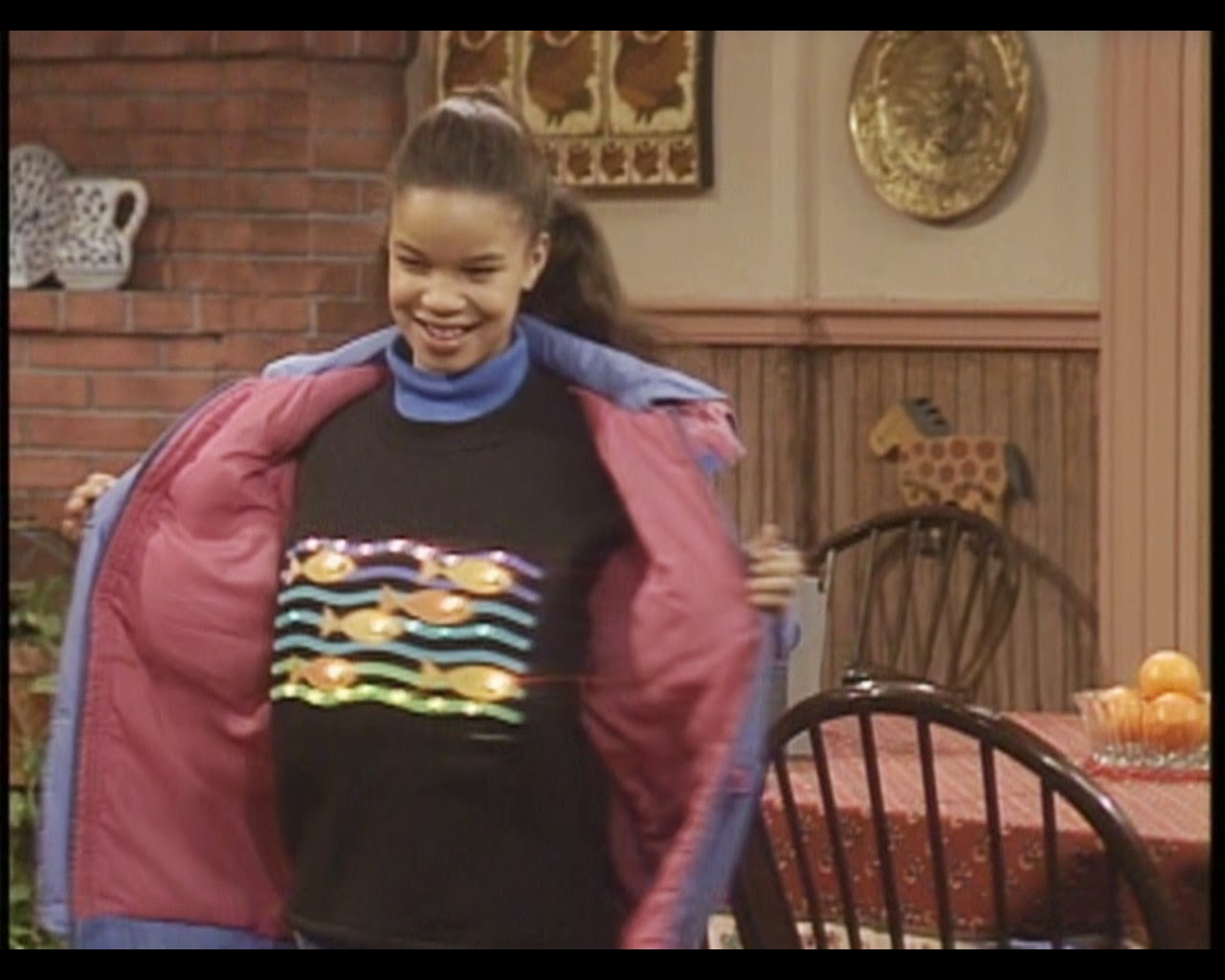 Nicolle Rochelle appears as Davina, the girl who makes the purchase that gets this whole ball rolling. Can you believe that this sweatshirt was on sale for five dollars? That's a steal! Literally, in Rudy's case. But come on: worth it. (Just kidding, obviously. This is an eyesore and the fact that three girls planned on wearing matching ones in tandem is just hurtful.) 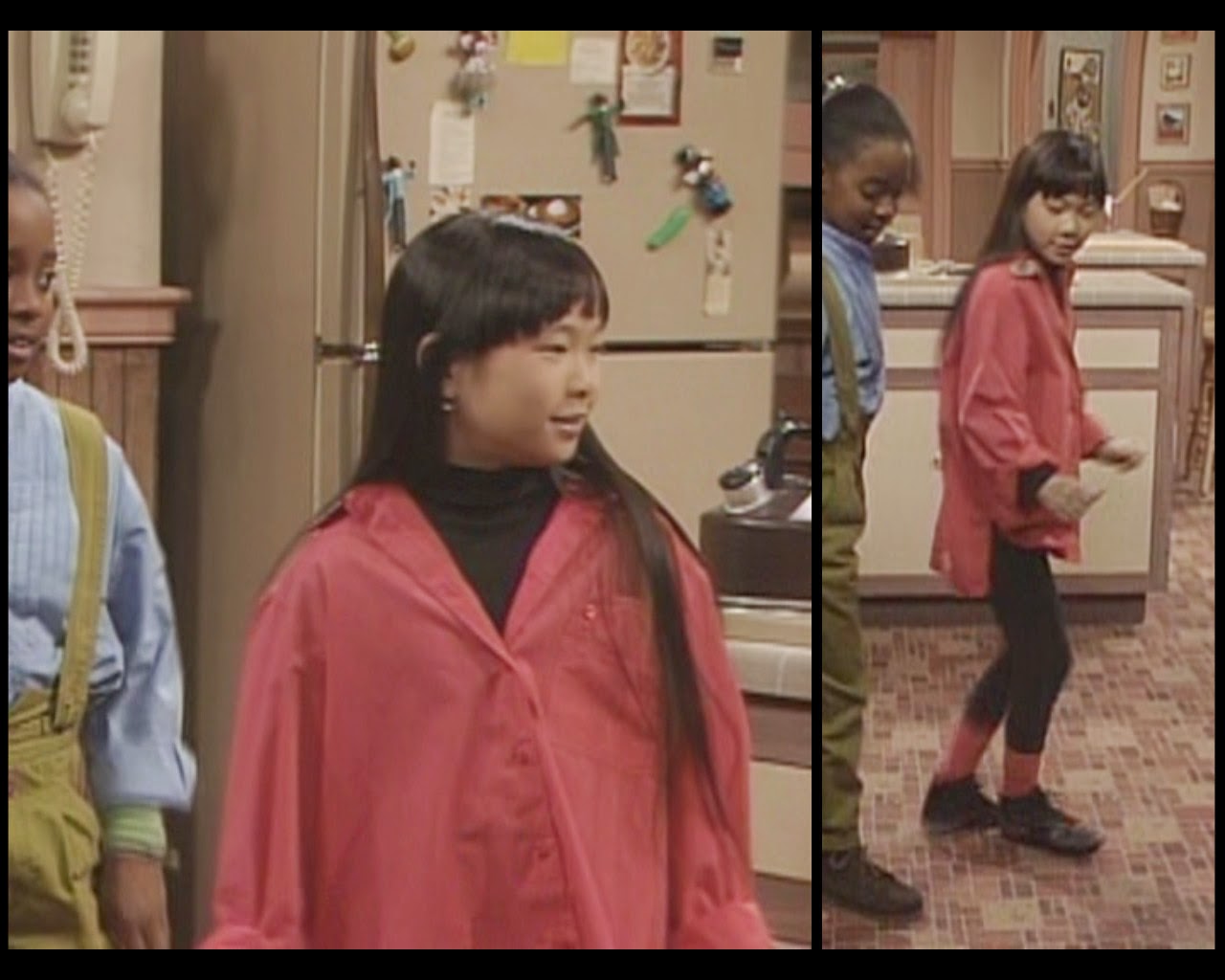 When I say freeze, you just freeze one time...

Kim also intends to snag one of these pieces of trash, but she's better off in the so-old-it's-new-again, available-at-American-Apparel salmon shirt and leggings. There's a weird chicness to it. 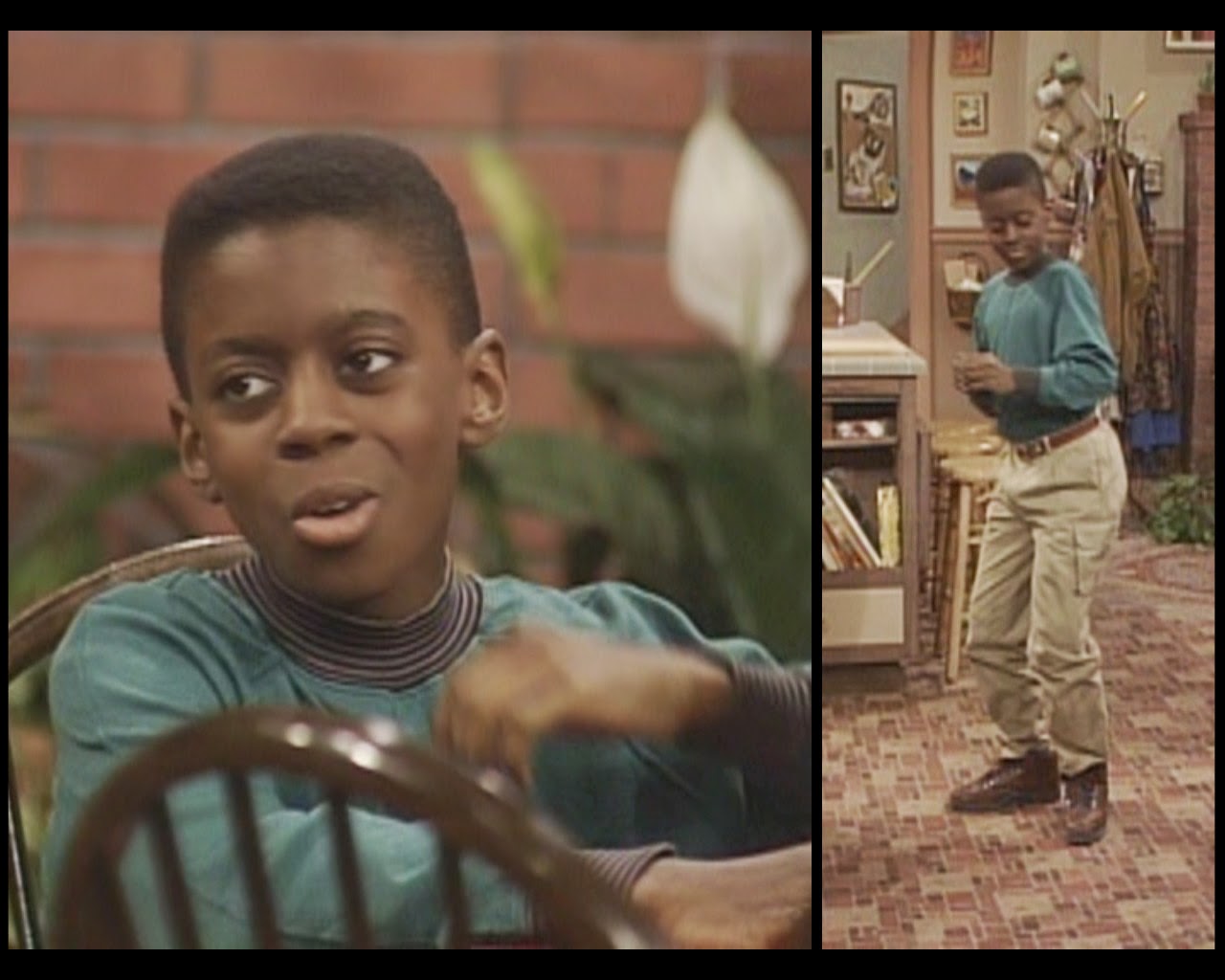 When I say freeze, y'all stop on a dime.

There is no chicness to Kenny's look. Especially those pants, which may was well be concealing a diaper. 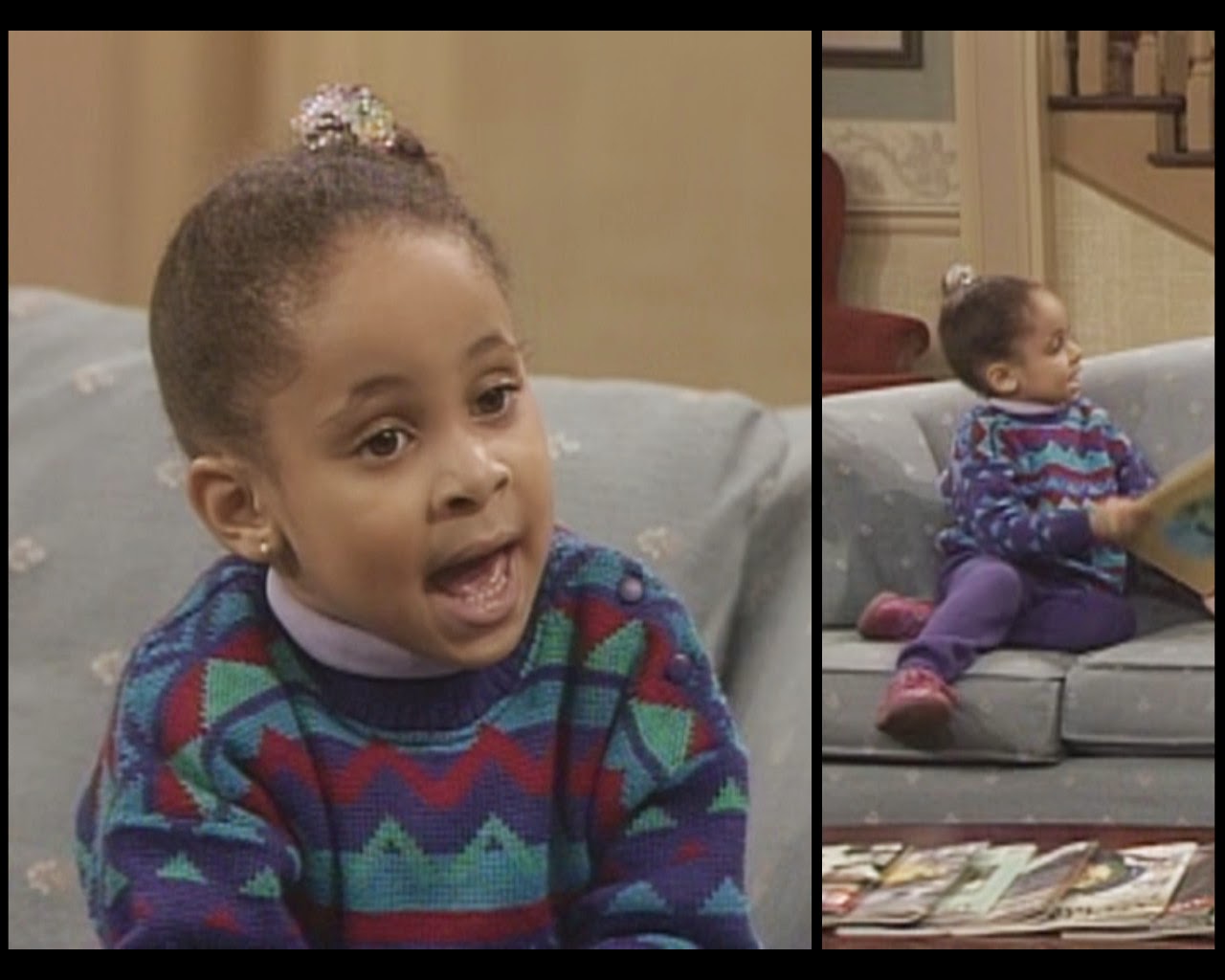 It's about damn time.

STOP THE PRESSES! Olivia finally repeated an outfit. This is the same getup she sported in episode #6.11. 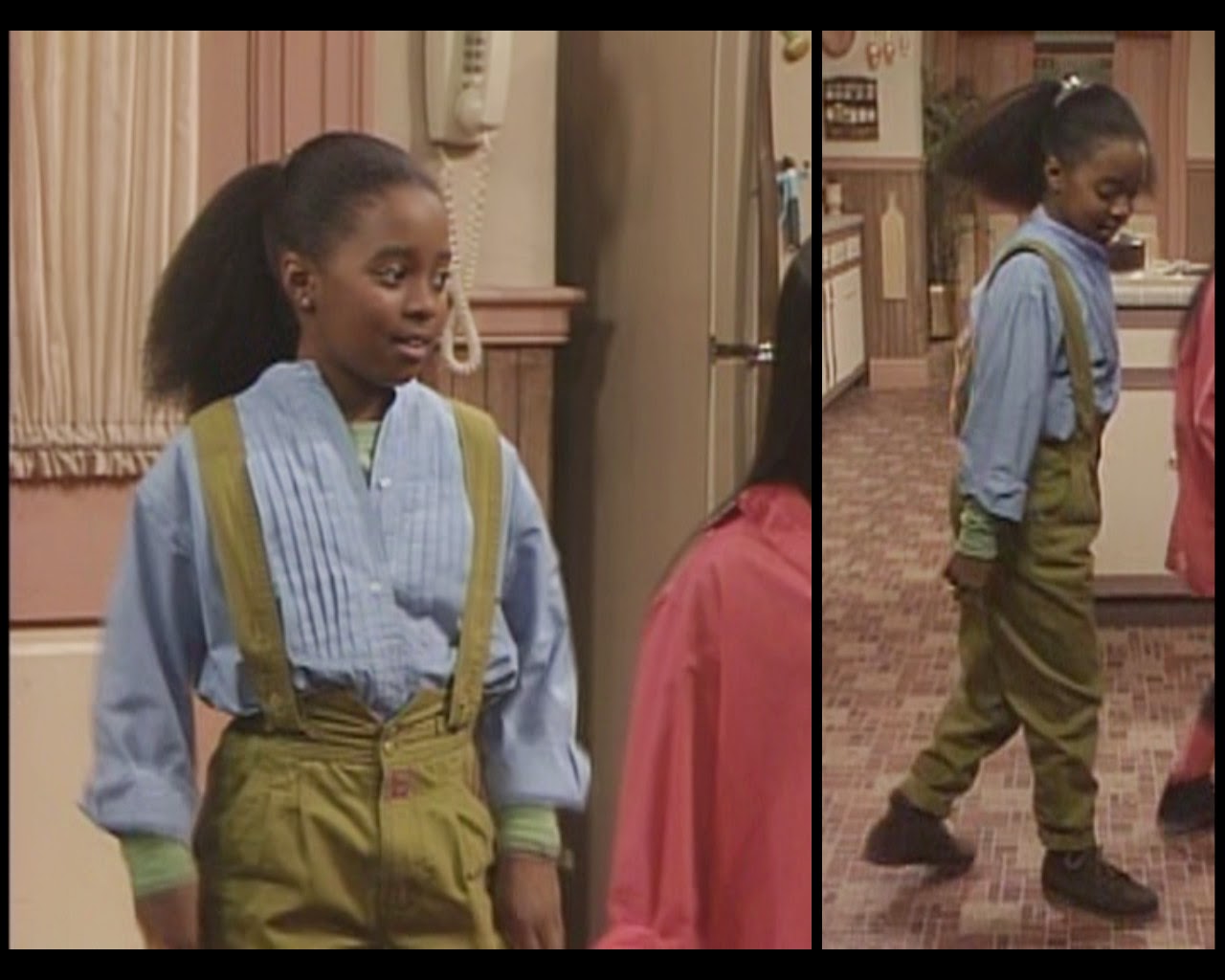 Too late. The dance party is over.

Rudy served up these overalls in episode #6.5, but I think for the most part they pair better with the shirt combo she's employing this time around. The texture, squared collar, and springy colors are lovely, though the sherbet green of her long-sleeved tee clashes outrageously with the chartreuse of the pants. There were so many other options! Would white not have sufficed? It's uncomfortable how often the Huxtable children beg for money.

This outfit combines many of Vanessa's loves: printed pants, shirts with lacy collars, and vests. There's not a lot new to say about these pieces. My biggest complaint is that the yellow pattern on the back seems to conflict pretty terribly with the trousers, though really just about anything would. Those pants are kind of gross. 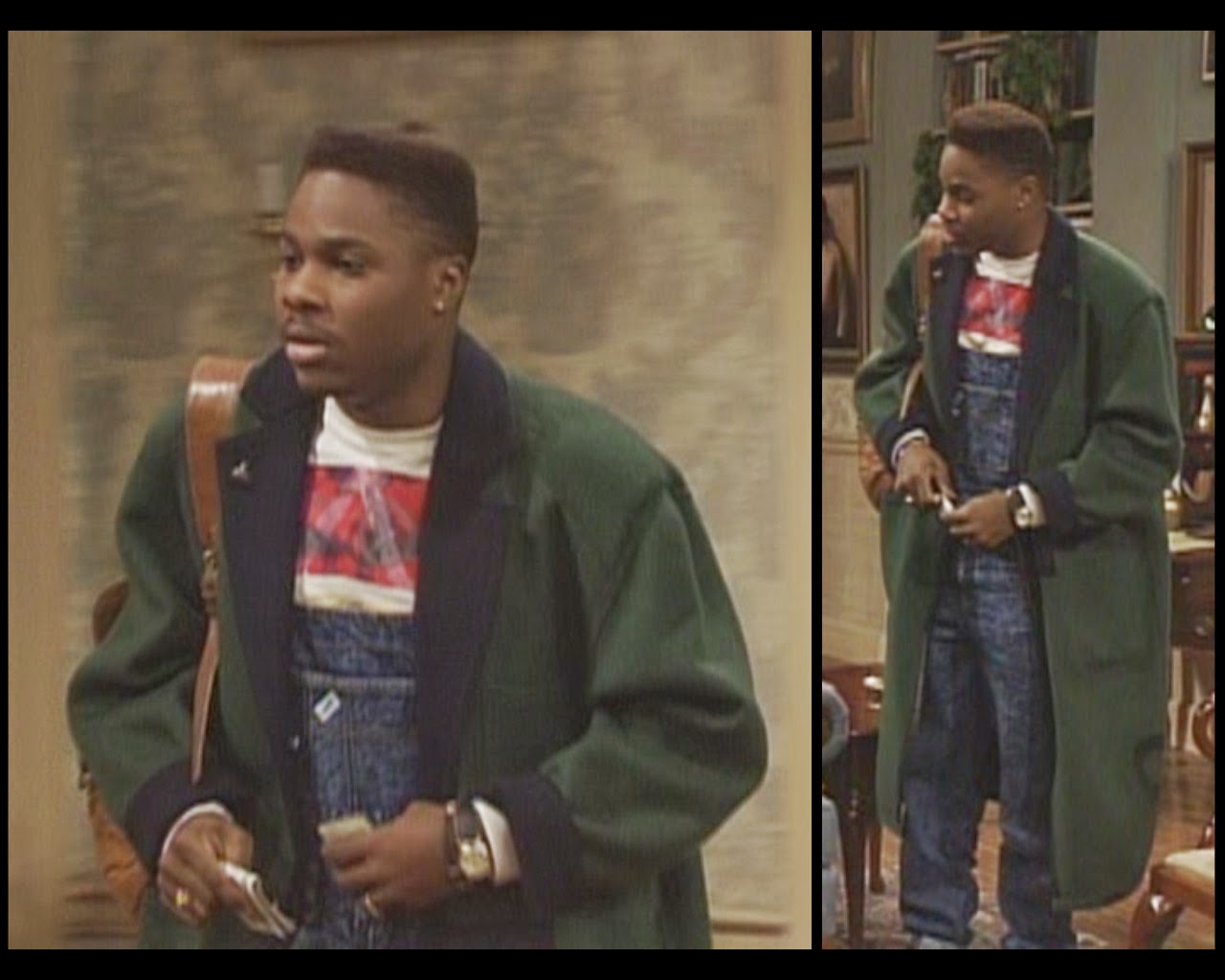 For once, Theo is the lender rather than the borrower. 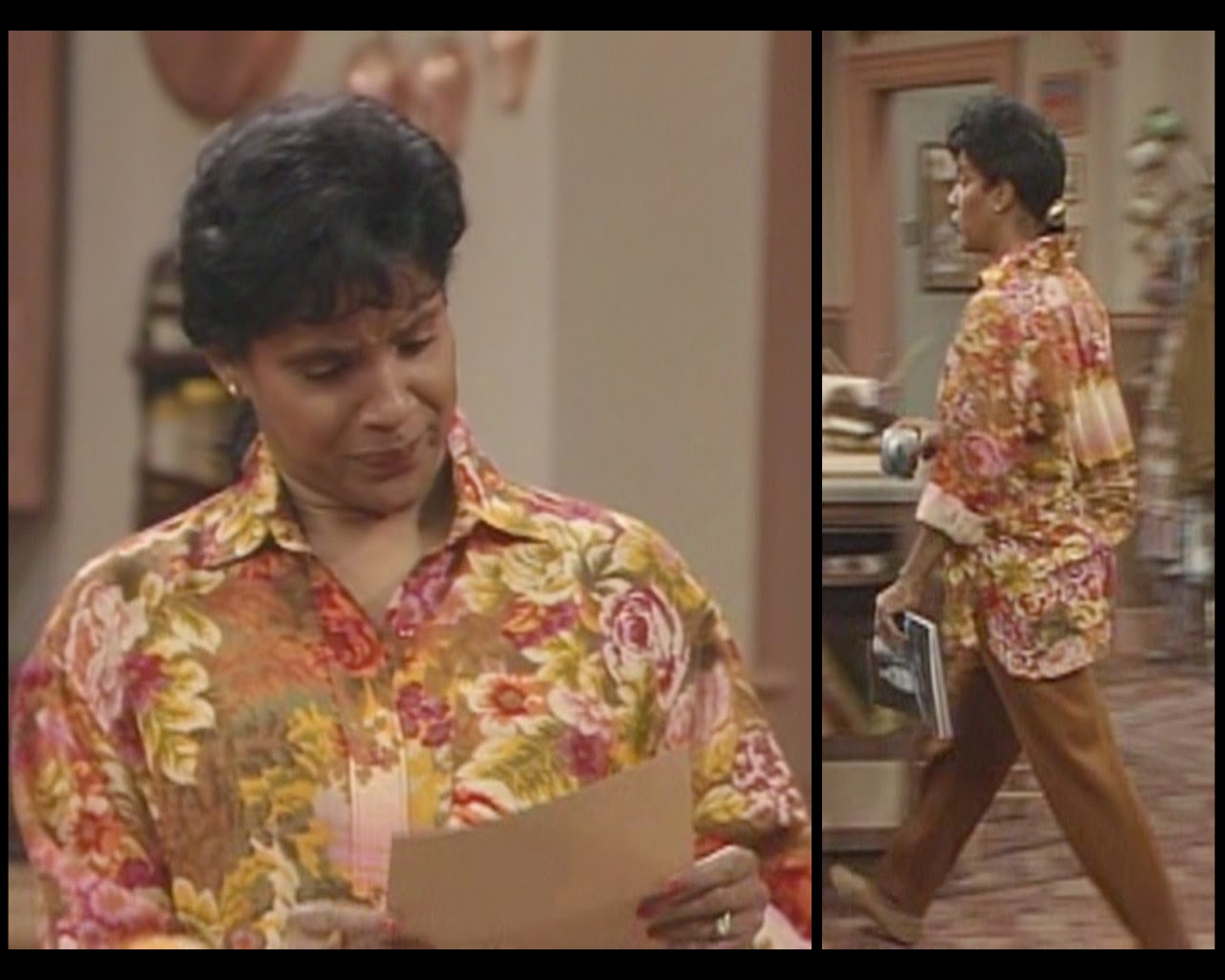 Tonight, the role of grandma's armchair will be played by Clair Huxtable. 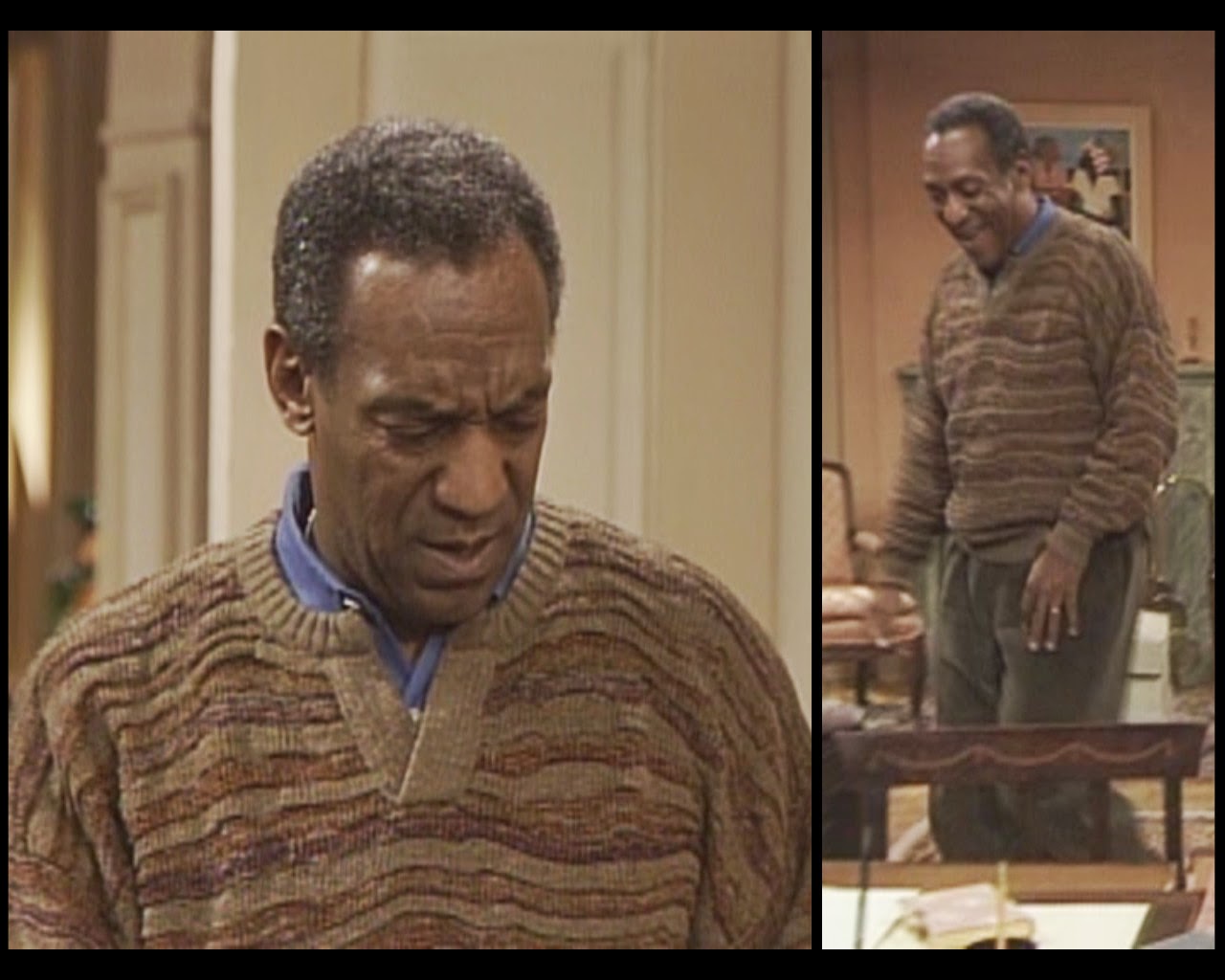 Cliff really digs back into the archives for this one: his sweater is from the first episode of season 3. It has only gotten grungier with age, and looks especially drab and sad when matched with these large, mossy corduroy slacks. The flash of blue at the collar helps, but not much. Mostly he looks like a pile of old rags someone left in the attic.

Cross your fingers for some Denise or maybe a formal event for Clair to go to next week. I'm growing weak at the lack of style being displayed around here.
Posted by Unknown at 8:00 AM