I've been waiting forever for this one to come up, because I remembered only one detail: Cliff gets pregnant. As it turns out, my recollection was accurate but incomplete. Cliff has a dream in which all men can become pregnant, causing most of the male cast to experience the joys of carrying and delivering a child. It's a really, really weird half-hour. 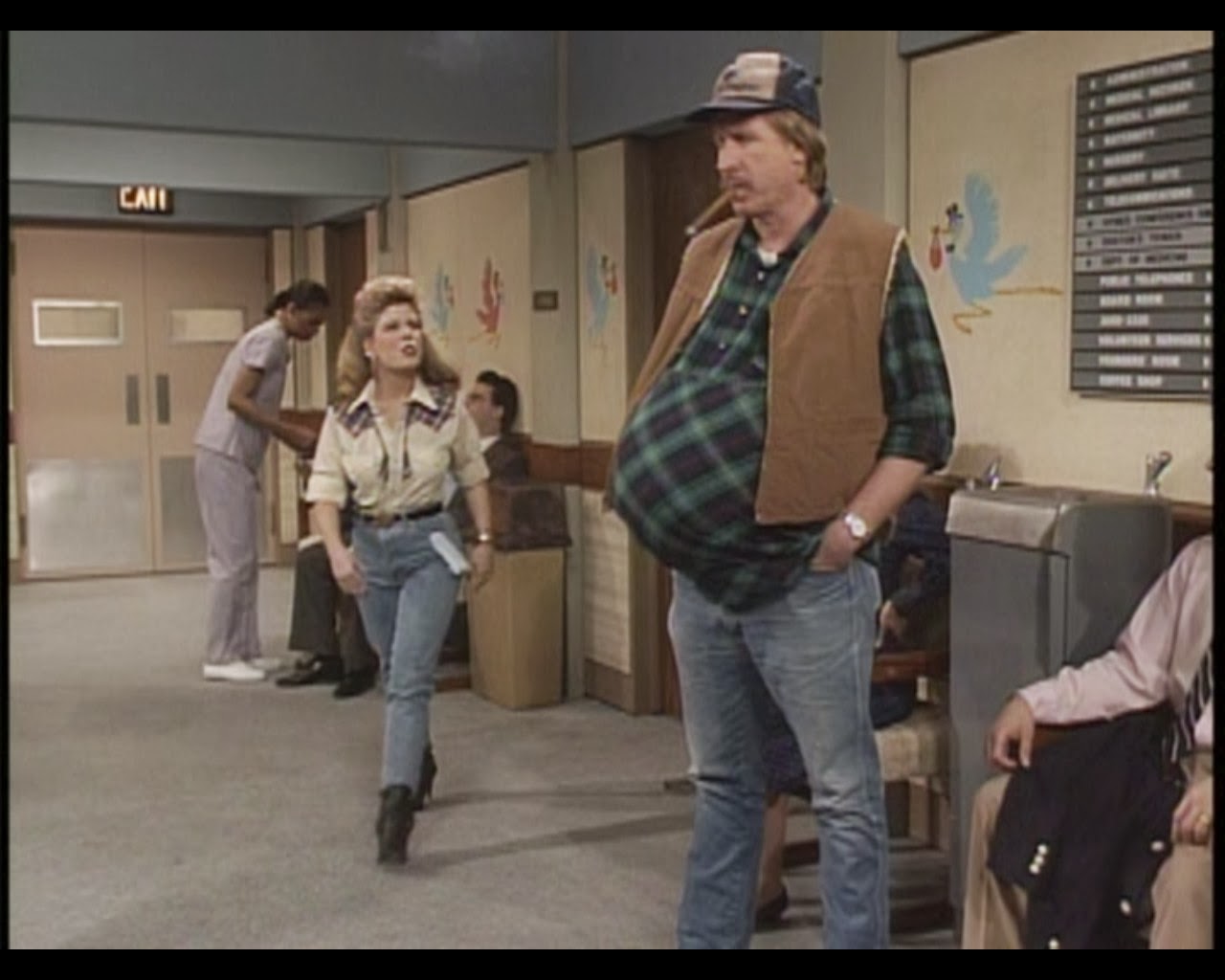 He's carrying high. That means it's a boy, right?

The effects aren't limited to the Huxtable clan, either. Brooklyn's only hillbilly couple is also about to gain a new addition. Sweet maternity flannel, dad. 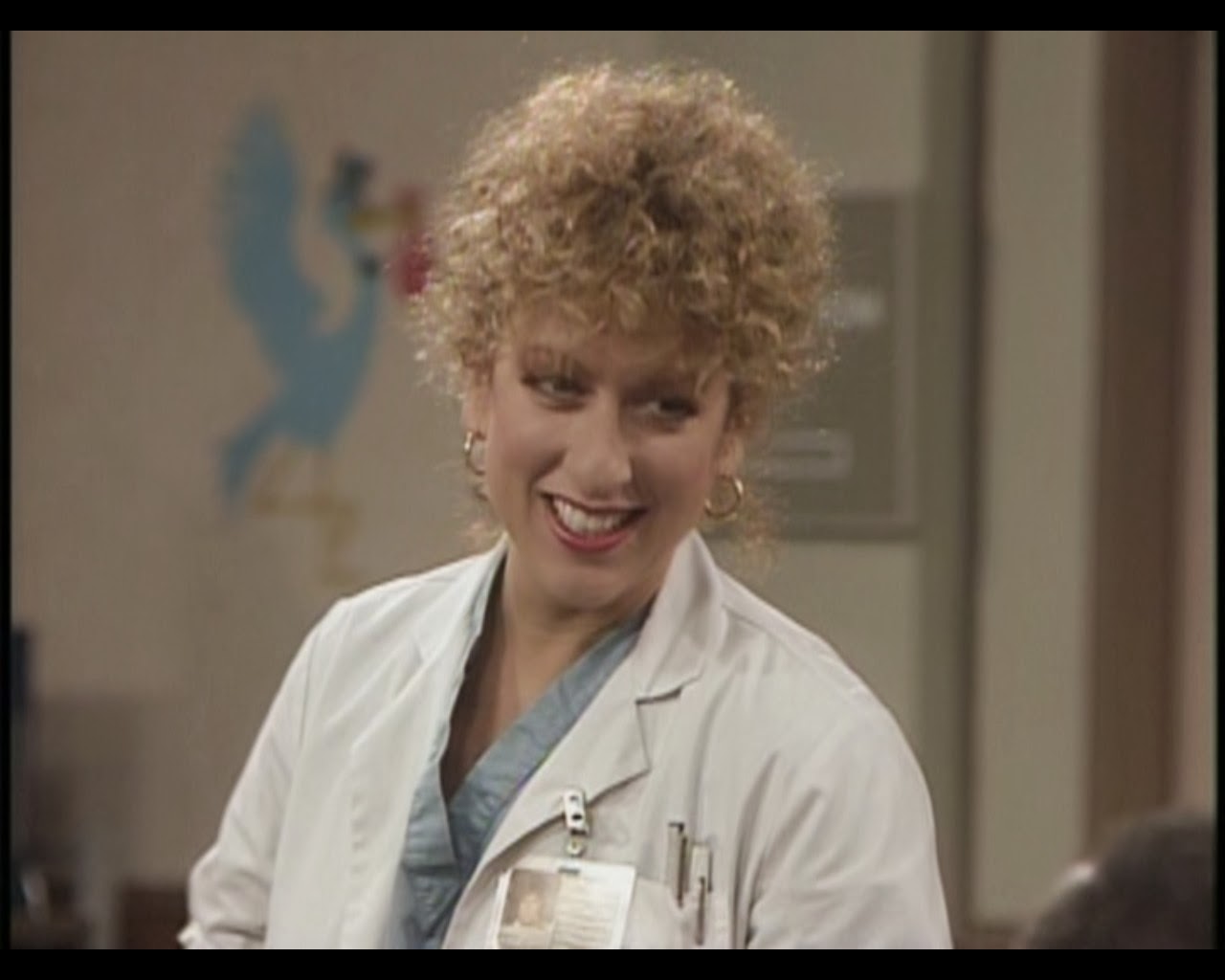 Remember her? No? Yeah, I'm not shocked.

You know you're making a bold leap into the '90s when Elayne Boosler shows up. Sadly, she wears only scrubs and a lab coat, so there's nothing more to say about her. 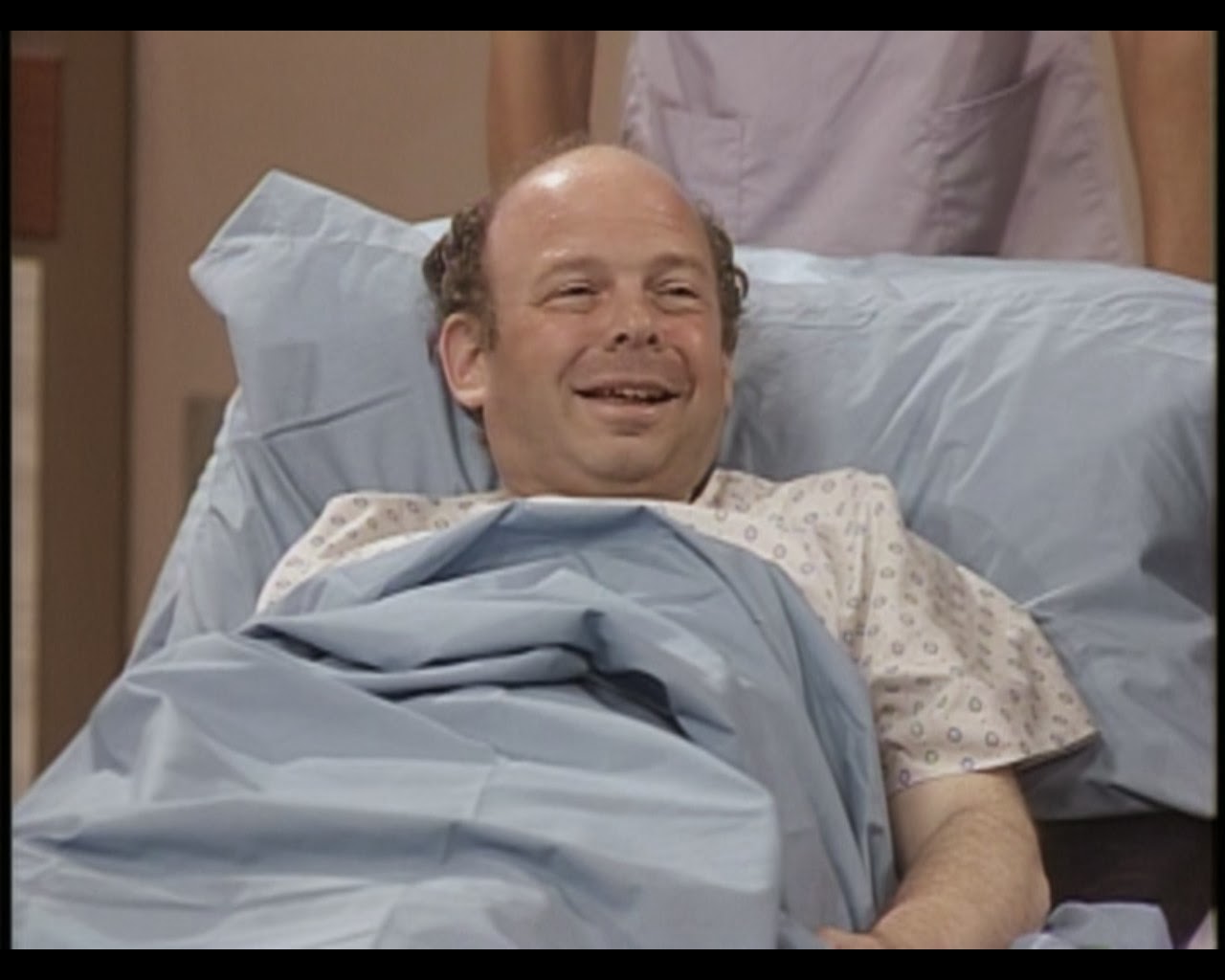 Childbirth has made him sweatier and squintier than usual. 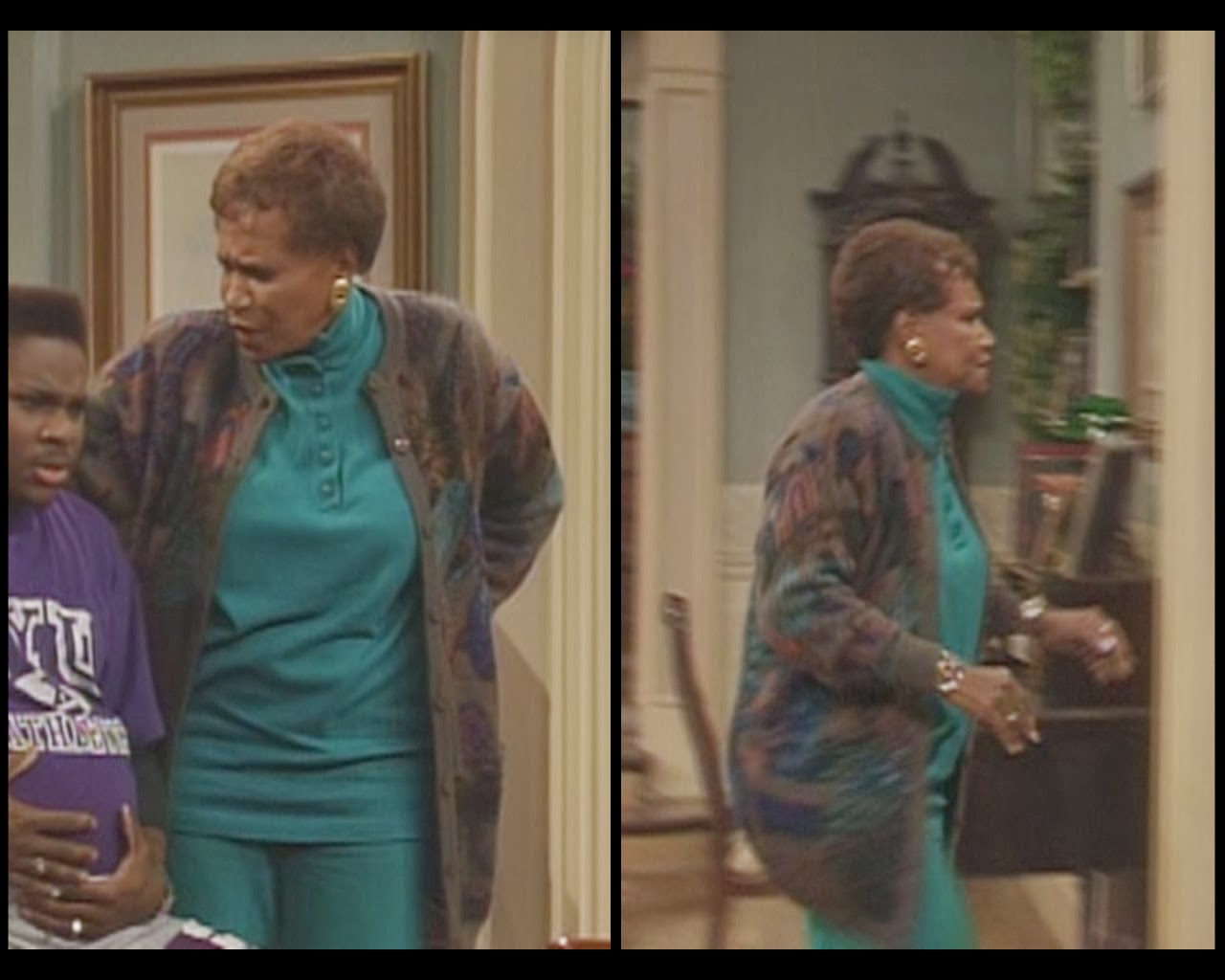 She's gonna have to do so much babysitting now.

Anna appears in her episode #3.14 matching teals and #5.4 cardigan. I guess it makes sense that Cliff would dream his mother in clothes she already owns. 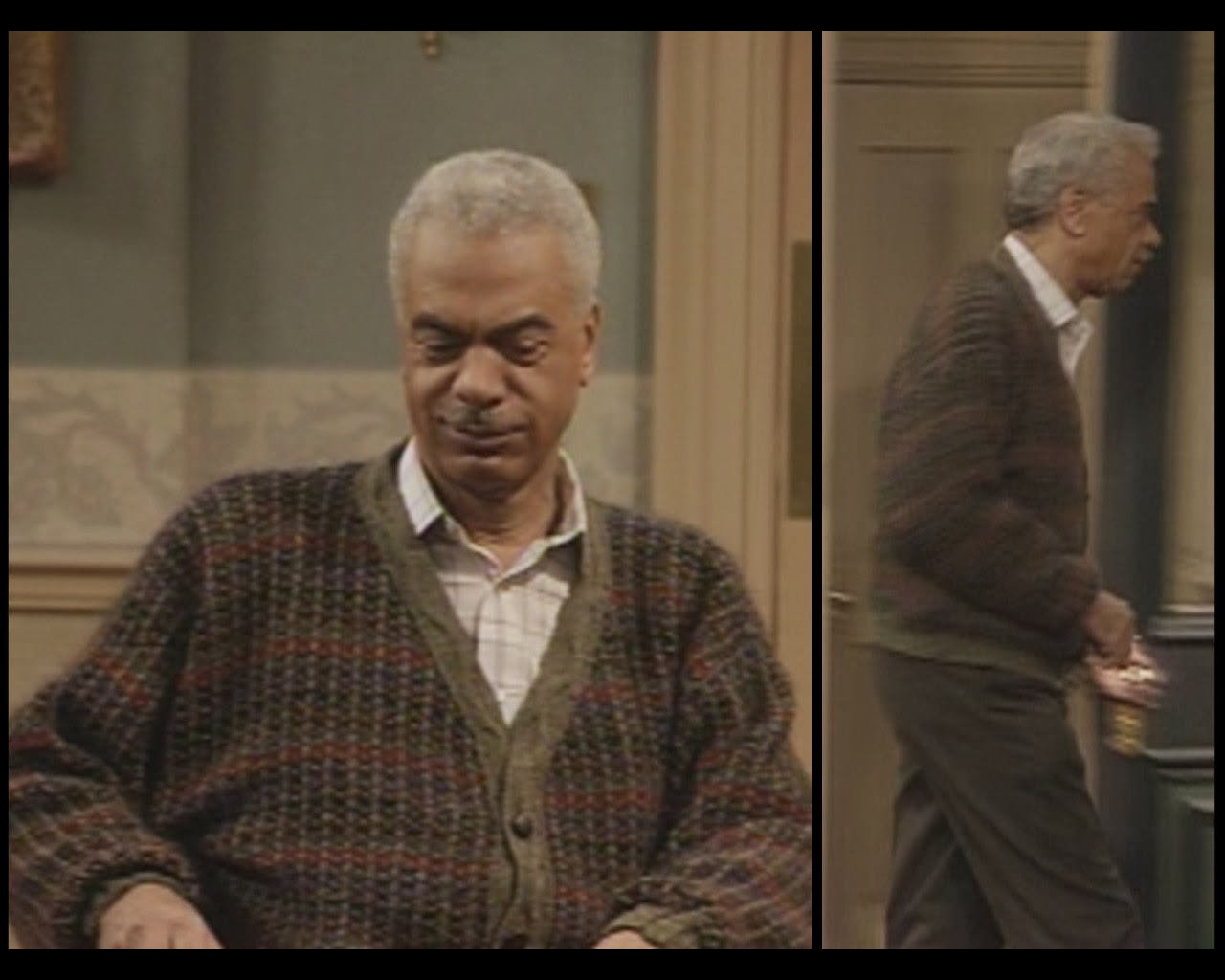 And yet we've never seen Russell in this cardigan, so there goes that logic. This fantasy version of Grandpa Huxtable lacks his real-life counterpart's typical panache. Where are the dynamic color combinations and timeless top layers? What does this bland, slightly ugly ensemble say about Cliff's relationship with his father? 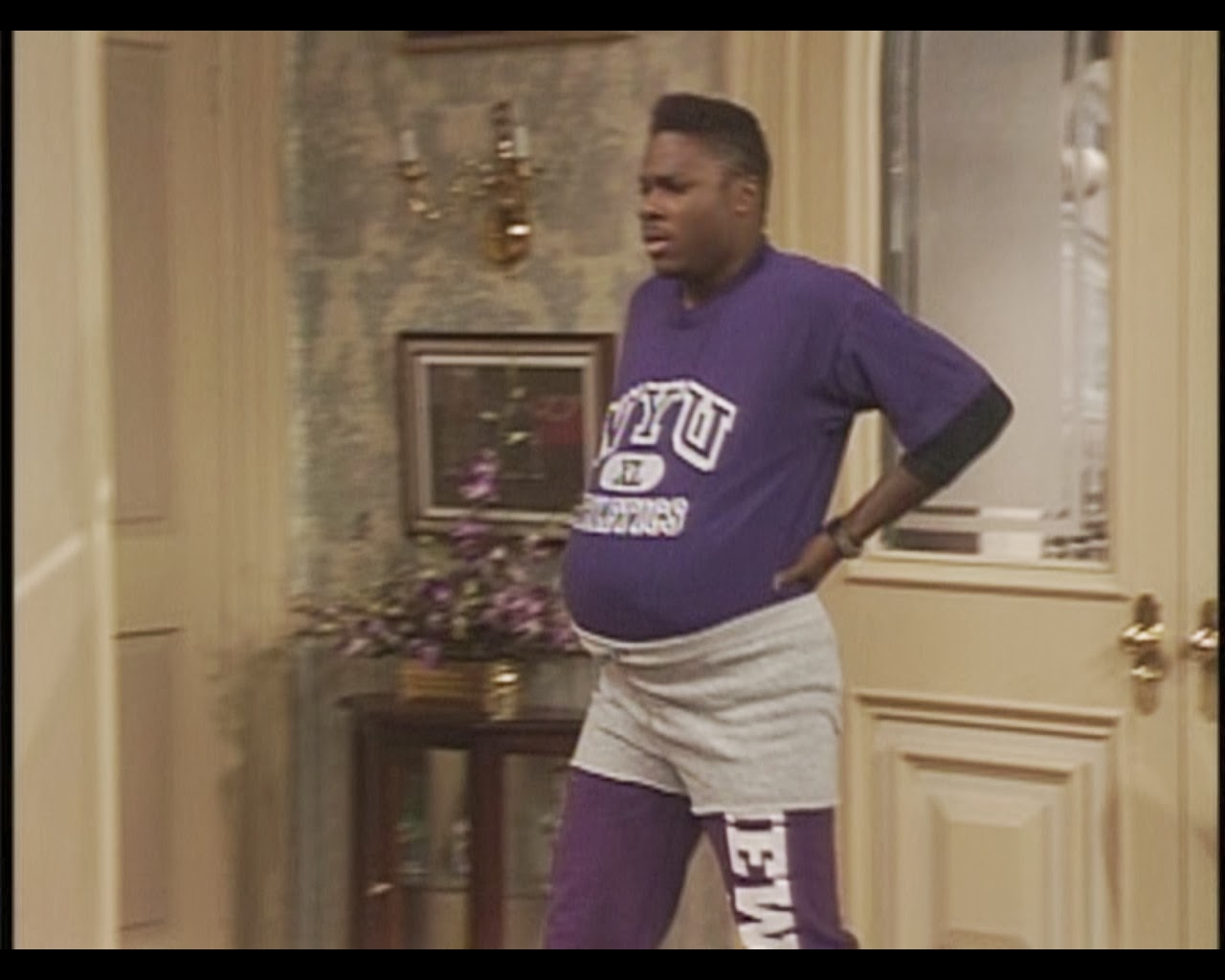 Even the fantasy version of him can't dress right.

The younger children don't feature this week, so Theo is the first Huxtable offspring we'll look at. We'll only look briefly, though: this baby-with-a-baby is in a sweatsuit, and you know how I feel about those. Come on. Original Hipster in the waiting room managed to find paternity clothes. What's your excuse? 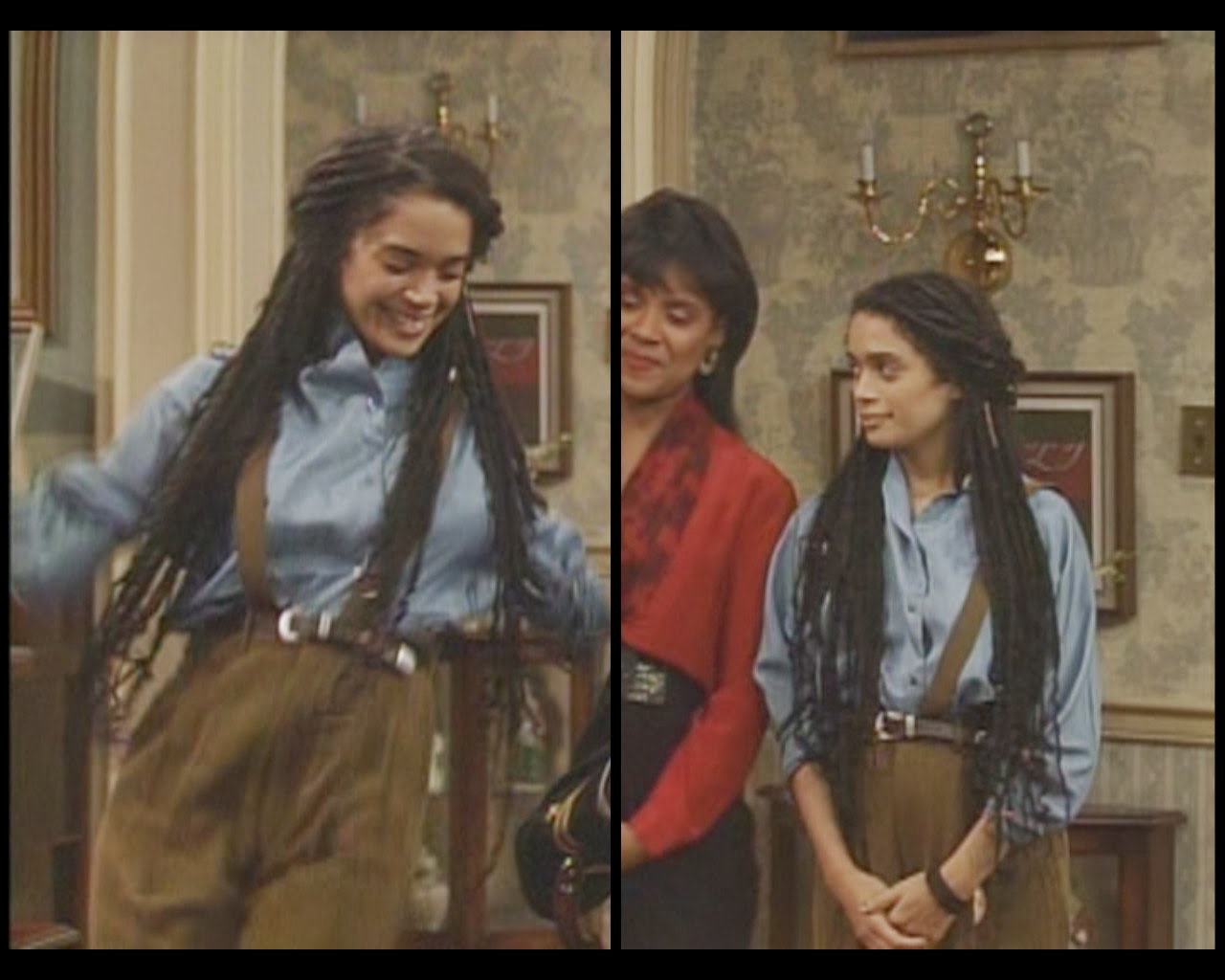 Is she ready for motherhood?

Denise returns to her episode #6.4 overalls, but juxtaposes them more simply against a cornflower shirt, giving us a better look at their construction. It's a neat little creation, really, employing some of the styling of a workman's uniform but tweaking the details to make it fashionable. The high waist, close placement of the straps, and even the floppy collar on the blouse take this distinctly out of the functional realm and into the world of androgynous beauty. 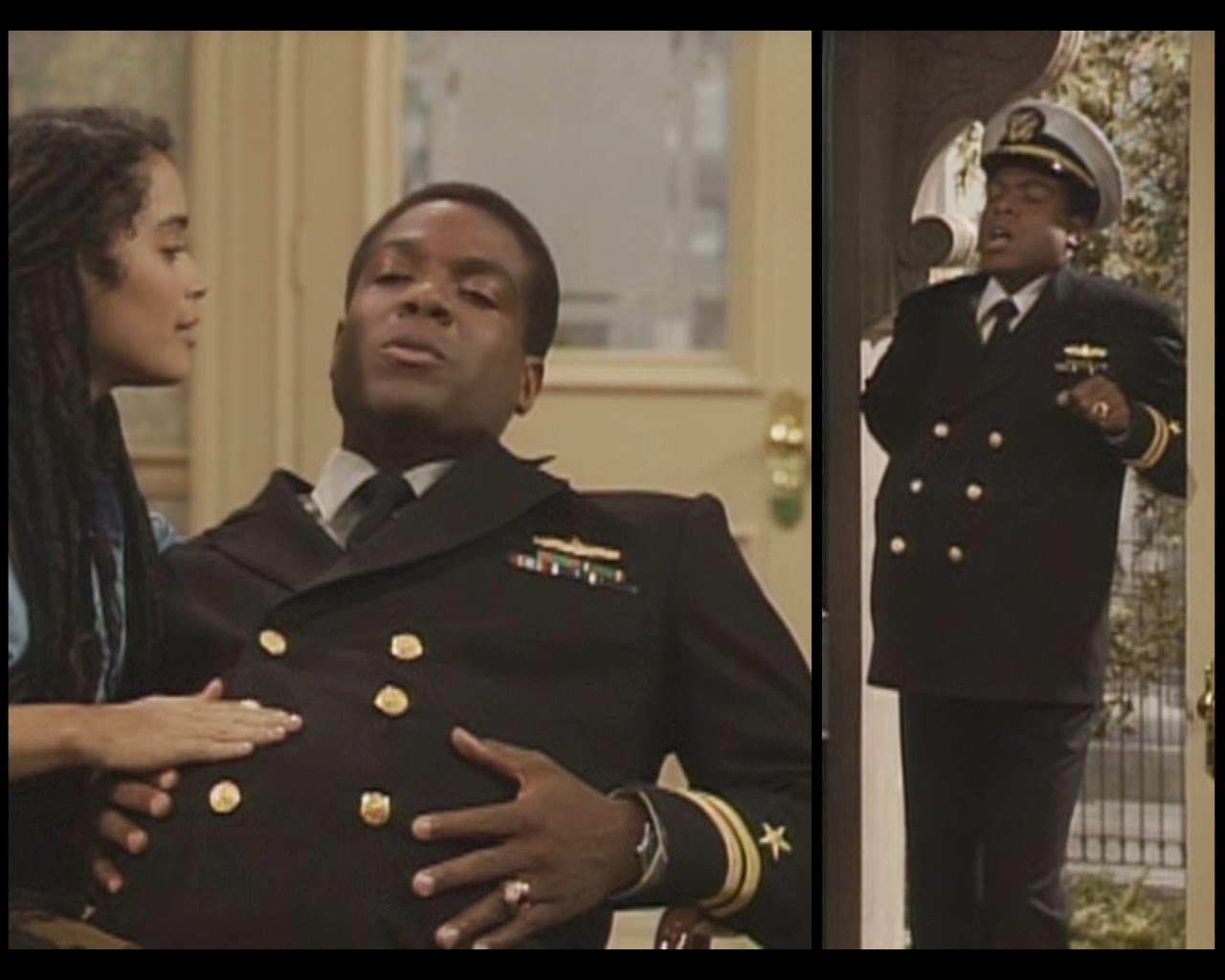 Her husband somehow managed to find a uniform sized like this. 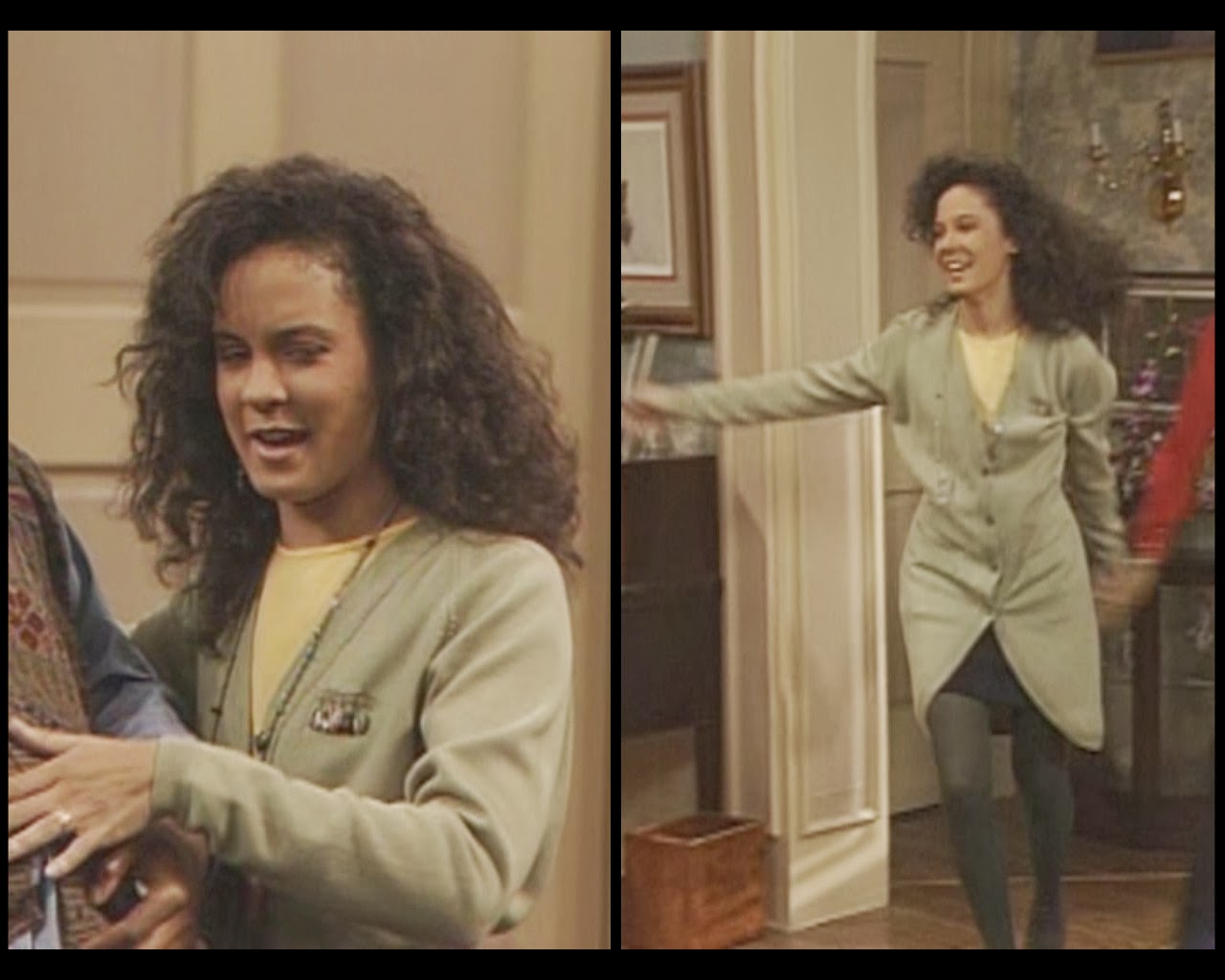 That wide shot is so "the hills are alive..."

Sondra's choices return her to that New Romantic image she enjoys. The shape of that cardigan makes it seem like something Napoleon might wear. It's nice, but not enough to be an outfit on its own, and the pieces supporting it aren't my favorites. The dark green tights are particularly troublesome to me; the short black skirt and pale yellow top are merely unremarkable. She's fine; she's got the right idea. I just need a little more from her. 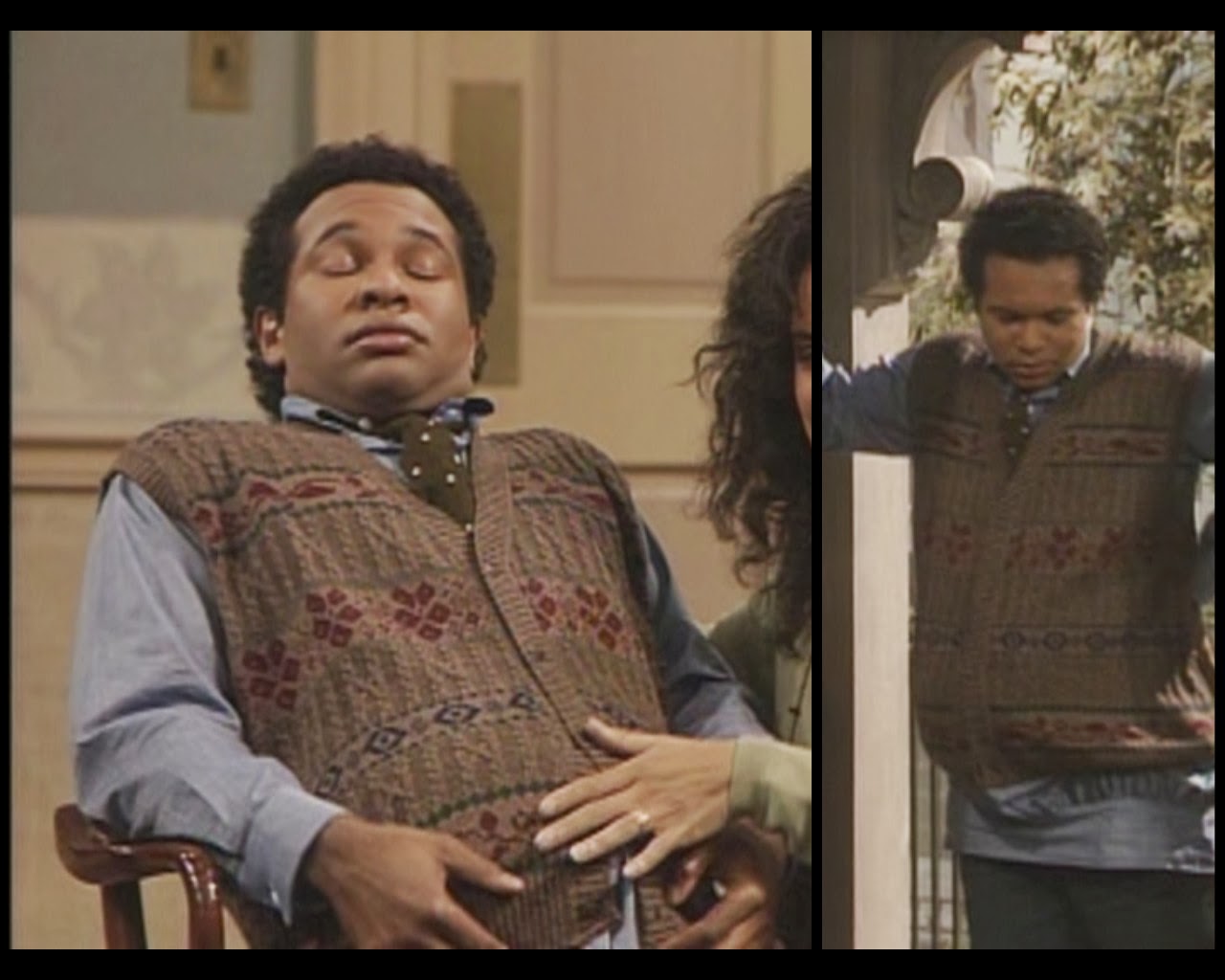 Other than the fact that he's in a sweater vest rather than a full sweater, Elvin is wearing basically the same thing he always wears. 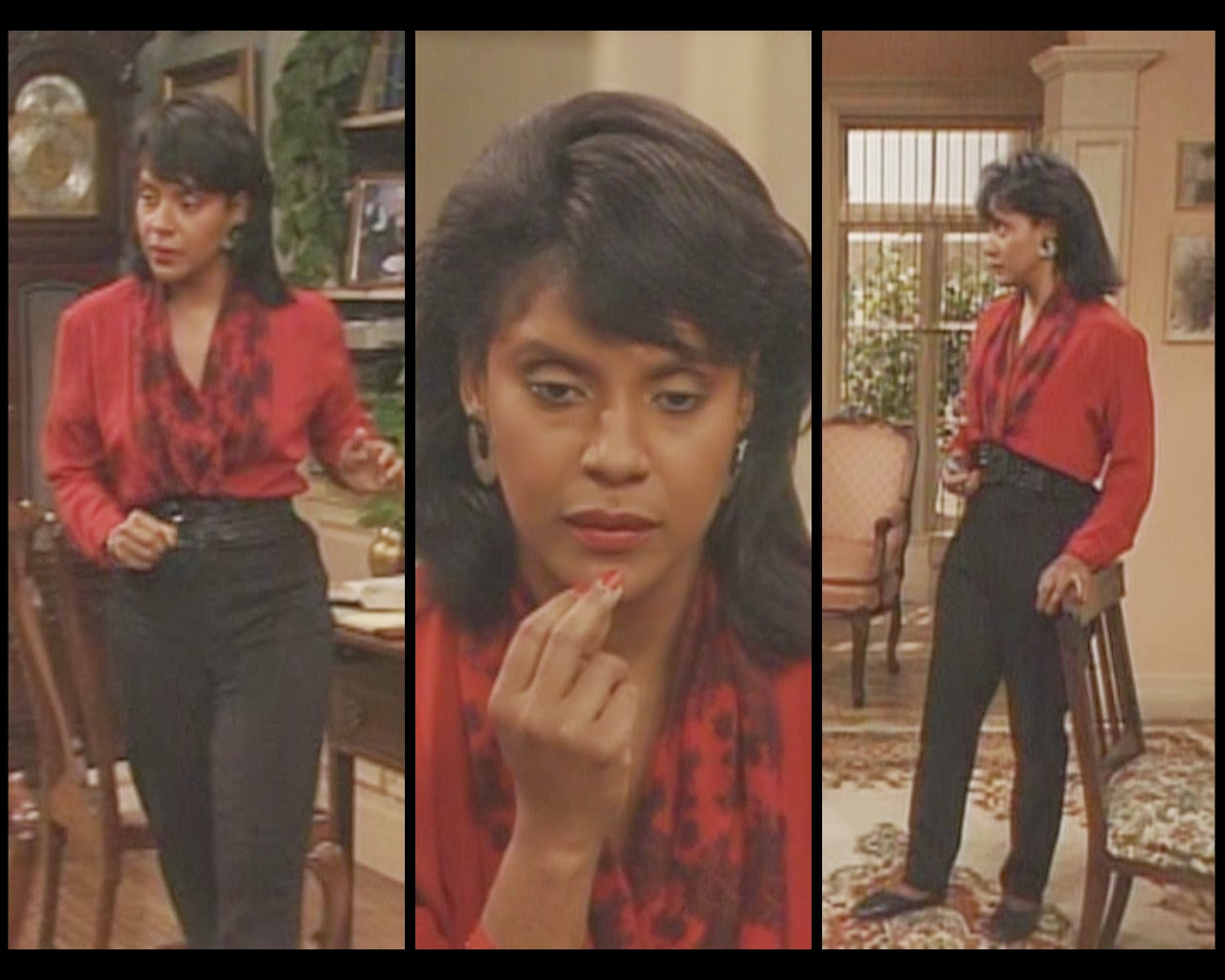 So clearly not a grandmother.

Now if I were going to dream about Clair, I'd put her in something much more fabulous. But Cliff's vision of his wife is grounded in reality, and this is a good representation of her typical style. That said, this blouse isn't a repeated piece, and I think it would make a good addition to her wardrobe if she can find it in canonical reality. The patterned, gathered neckline is fabulous, and ruby is her color. You can see in some shots that the belt has sagged, or that the hang of the top causes it to seem that way, but if you ignore that, then this is a great presentation. 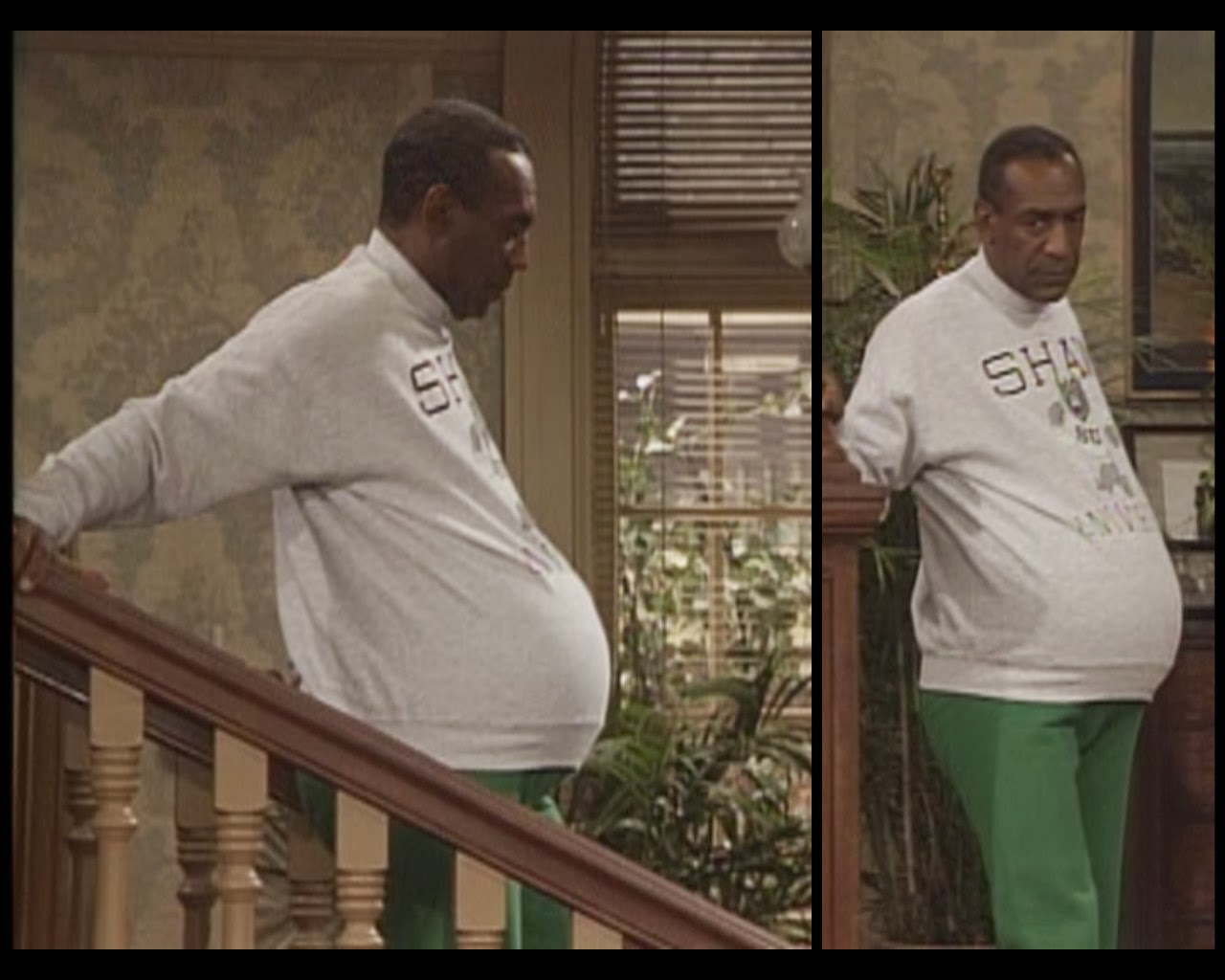 To be clear: he ends up giving birth to a sandwich and pizza.

Cliff pictures himself in comfortable clothes. I can't fault him, but I also can't review him.

I'll warn you in advance: I'll be out of town next week and might be prevented from posting a new entry as a result. I'll do my best, but if I am several days late in updating, I apologize. I promise it's just a temporary setback. I'm not quitting this thing until it's finished.
Posted by Unknown at 8:00 AM