Nothing puts a speed bump in my week like an episode that occurs over several days and focuses on the children. Could the sitcom writers of the future not have anticipated my need for fabulous outfits about which to write? What am I going to say about a classroom full of kids? Yech. Anyway, Rudy has a crush on a boy in her class, but he's acting like a jerk because society's gender norms encourage young males to be antagonistic rather than tender in their emotional expression. This all occurs while their teacher, Mrs. McGee, holds a series of lessons on manners, culminating in a formal dance. 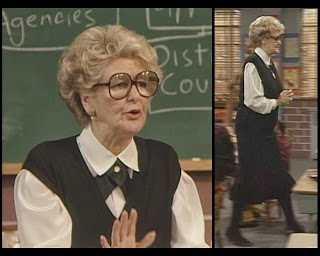 The teacher in question (who should probably focus more on academics, truth be told) is played by the legendary Elaine Stritch. Her outfits stay true to the persona of a schoolmarm, so we won't look at them too closely. I'm pretty pleased with this just-below-the-knee skirt and the ruffle at the hem, though. And that crossover tie. Those things could be brought into a modern outfit capably. The clean black and white work well for her, too. 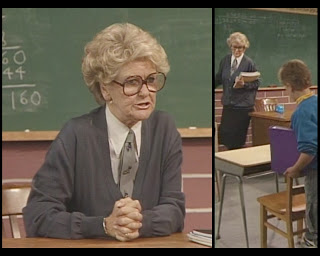 She's serious about her ties. Solid cardigan, but yesterday's skirt was better. 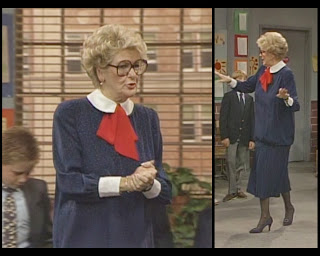 For the dance, she keeps a similar silhouette, but branches out into an actual color and pattern, not to mention adding a little variance in the tie/collar configuration. Honestly, it's probably the weakest of her three looks, and I'm not sure that it's any more formal than the previous two. But she tried. 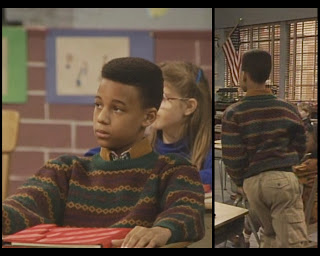 You can do better, Rudy.

This one episode as Clarence comprises the entirety of Michael A. Moran's acting career. The costumer dresses him rather respectably, in the Cliff/Elvin vein, to let us know that at heart he's a nice boy who is right for Rudy. Even though he treats her like a jerk and never appears in another episode. 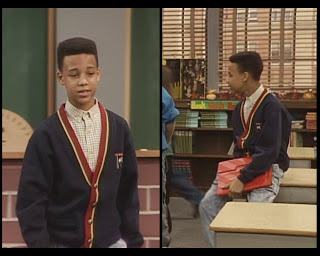 He went for, like, extra early acceptance to Yale.

Collegiate chic. He would be a winner if his friends weren't losers, says this outfit. 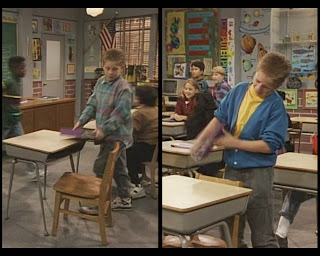 Speaking of his loser friends, here's one. He's nameless and style-less, but he grew up to be Aaron Schwartz, who is mighty attractive. 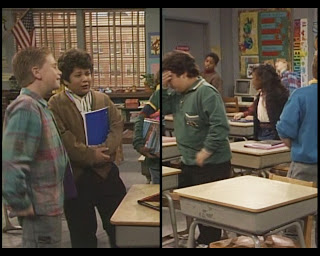 This one's no better.

His other no-good companion, who also has no name and also dresses like a schlub, is Shaun Weiss. 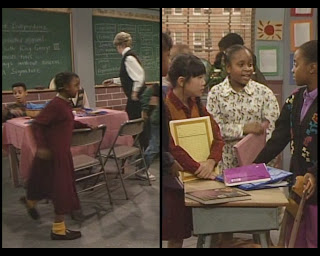 Rudy's rolling with some ladies herself. Avanti Taylor plays Amy, who enjoys formless maroon dresses and shirts with ugly prints. 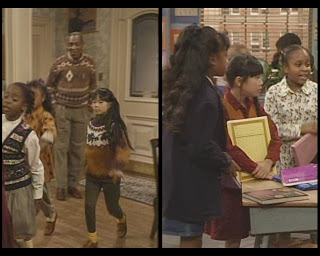 At least we know her.

Kim Ogawa is also back. I'm all over that first outfit with the leggings and the wild sweater, which is one of those things that you could wear to a friend's place today without any idea that you were copying a nine-year-old from 1989. The red print dress with the ocher vest is pretty irrelevant, though. 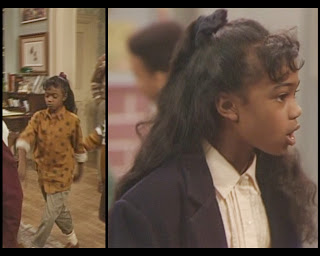 Oh look! Someone who worked again!

And look who her third friend is! Tatyana Ali, best known for her work on The Fresh Prince of Bel-Air. She doesn't wow me with that initial getup, but the blazer and tuxedo shirt on day two are both stellar. And that's not even her formal wear. 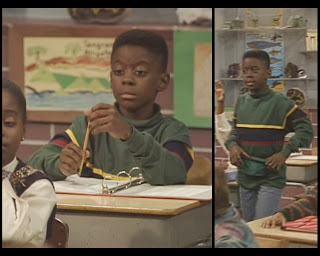 Kenny also shows up. He wears this. 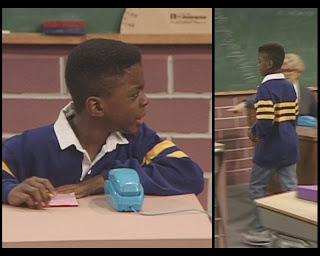 He knows how to answer a phone. Why is this being taught in school? 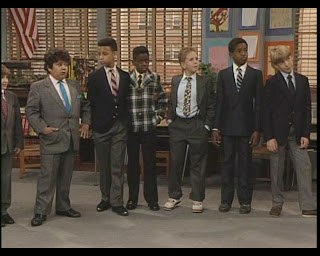 The boys look like this when they dress up. Props to Kenny for that plaid. 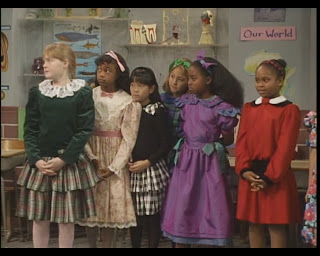 The ladies look like this. Note Amy's continued commitment to the red sack dress. (Technically there's a belt, but it's not doing much.) Poor Tatyana is saddled with some sad Little House on the Prairie confection. Rudy we'll get to later. 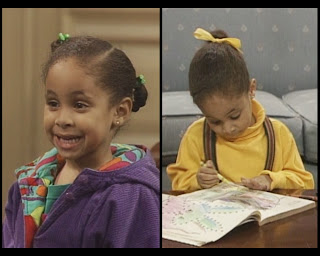 She did what she was sent here to do.

Olivia brings the cute, but come on, enough children already. 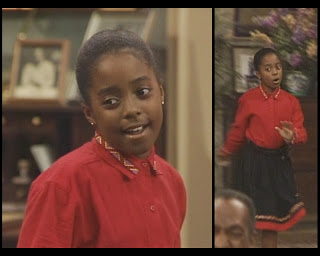 Her parents are to blame for this.

This is the first of four (four) presentations from Rudy. We'll call it "Tex-Mex Server." 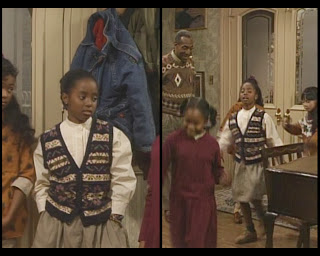 The seeds of bad attitude have been sown in this one. 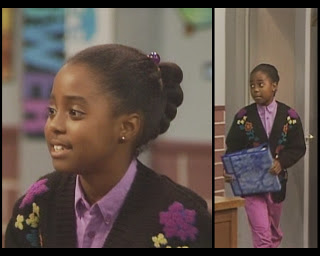 She should have a nicer Trapper Keeper.

Her third look is what your friend's aunt wore to the first day of her scrapbooking class when she didn't know anybody and wanted to seem like she was fun but not trying too hard. 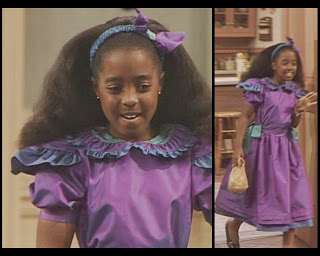 For formal day, she tries to use volume and neck ruffles in the same manner as a cat arching its back or a lizard unfurling its fins: to create a size illusion that would intimidate Clarence. Perhaps not fashionable, but certain to stun predators into retreat. 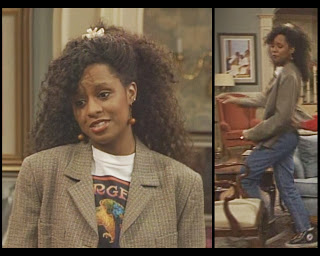 Aw. Vanessa is giving me a sort of Charlie Chaplin/Buster Keaton vibe with this look for a reason I can't quite explain. It's not that her clothes resemble theirs, but more that she has a sort of dapper clown persona for this scene, and her styling is meant to highlight that. The whole thing remains cohesive, though, and is actually rather fetching. I'm a huge fan of the men's blazer paired with a simple jeans-and-tee foundation. It works on her. 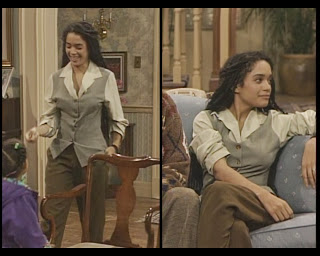 She'll always hold a special place in my heart.

No Theo this week (no complaints here!), so on to Denise. This is a subtle, sleek presentation that comes across as assured and unpretentious. As usual, I adore her. The construction of her blouse is particularly compelling, as it seems to have a vest essentially sewn into it: the seams at the sleeve are flush, but then there's an open overlap at the base of the collar. Clever stuff. 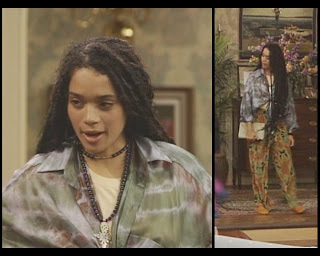 Even when this happens.

For her second appearance, she pairs her episode #6.5 pants with another billowing top. Though thematically consistent with her hippie ethos, the outfit is less effective than some of her others in terms of fashion. These prints and colors could complement each other better. Or at all, really. 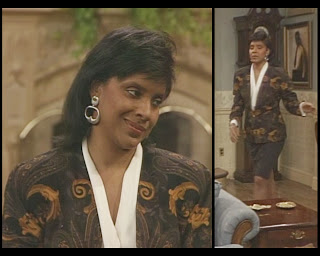 Oh Clair. You are a perfect vision. 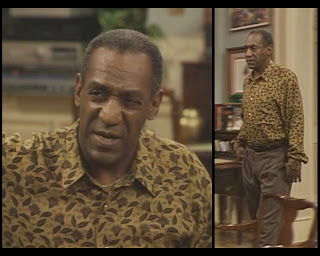 Cliff opens with a shirt that could almost be cheetah print but reveals itself to be a leafy, grassy sort of thing when you get closer. It doesn't go great with those pants. 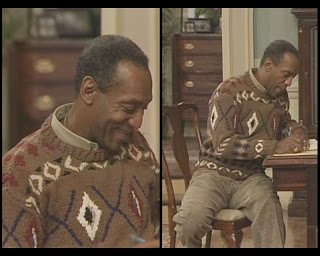 Maybe we should go back to no sweater.

His second day brings a sweater I don't really like with pants I don't think I've ever liked. 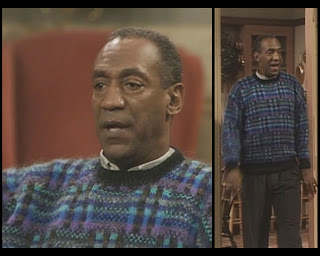 And finally a sort of Mandlebrot sweater that unfurls into tinier and tinier checked patterns as you get closer. It's also fuzzy to the point of shedding. The soothing blues help to combat the maddening flyaway threads and static-like design.

And there you have it, folks. A long, long list of clothes worn by people in an old sitcom. To be fair, what else did you expect when you came here?
Posted by Unknown at 1:45 AM