Sondra is lamenting the trials of caring for twins when Denise comes home. Supernaturally convinced that two infants couldn't be any harder to manage than one (despite the fact that her own parenting experience began after Olivia learned how to walk and talk), she volunteers to prove her prowess and shame her older sister by babysitting. Of course, it all goes awry. In Denise's defense, I don't think her desire to prepare organic meals should have been met with quite so much disdain. 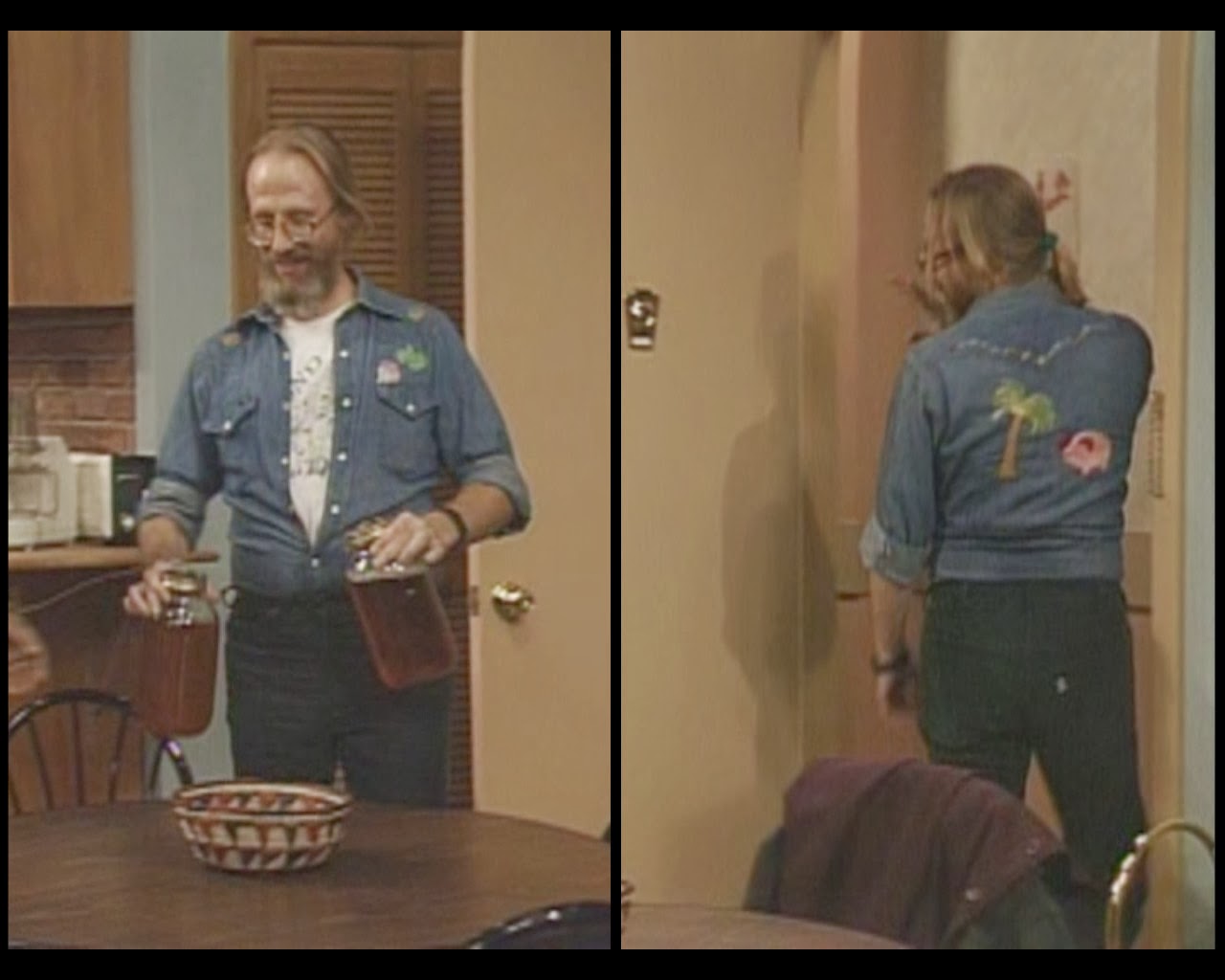 Nothing about this dude makes any sense.

Raynor Scheine shows up as Sondra and Elvin's neighbor Bob. He's got this really incongruous hippie vibe paired with a thick southern accent and apparently spends a ton of time creating homemade beverages and crafts. Again, scorn is conveyed for such hobbies, though in reality, I think it'd be awesome if my neighbor gave me cider and candles. I mean, sure, he's kind of socially awkward, but so are lots of people. And none of the weirdos I know come bearing gifts. As for the clothes, he's clearly a thrift store shopper. Which is fine, as long as you don't buy a too-small cowboy shirt with insane images emblazoned across the back. 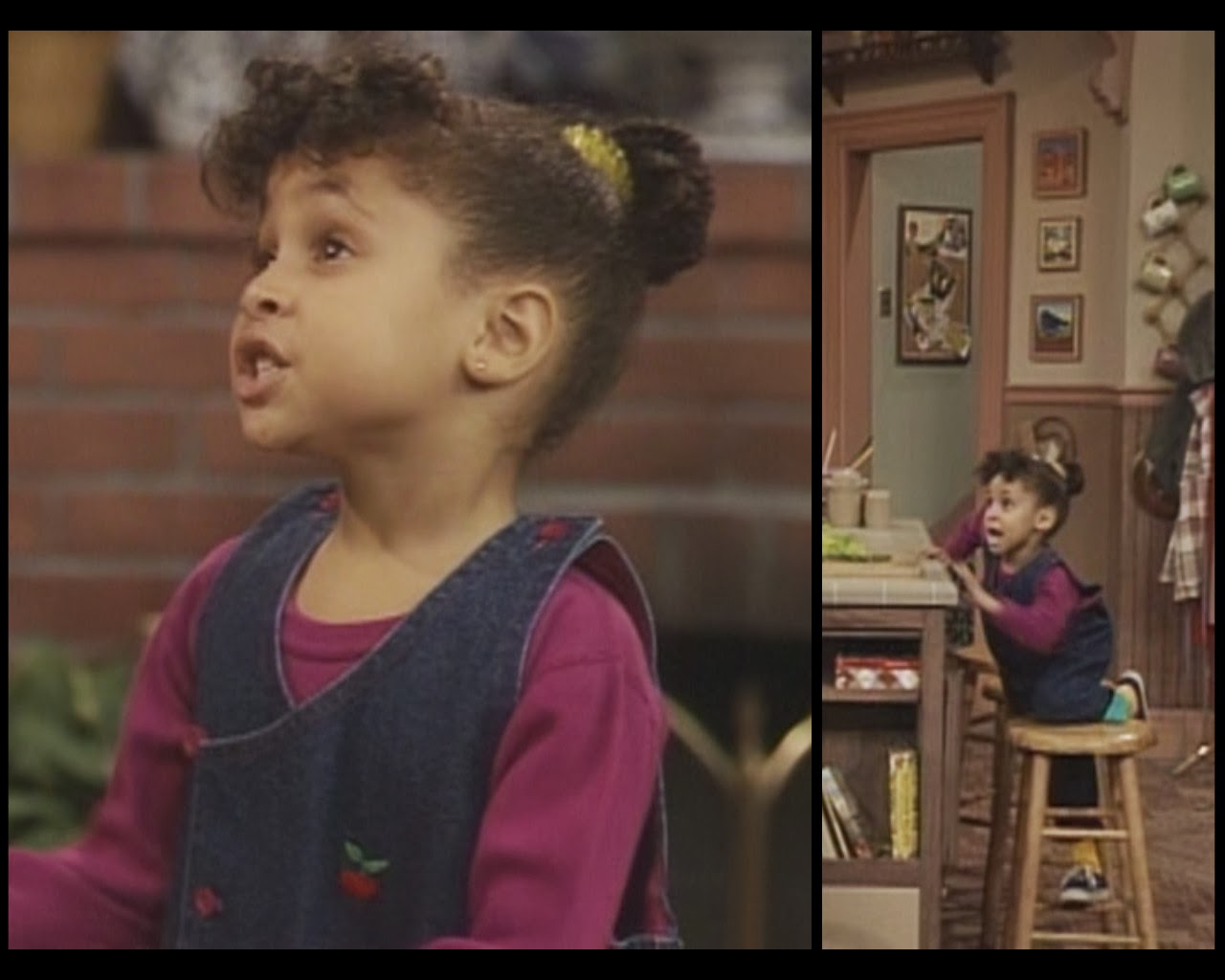 All cute, all the time.

This episode is so thorough in representing the family over two days that even Olivia doubles up on her outfits. This first one is a slight update on the classic overalls, serving a sort of crossover pattern. The embroidered cherries are nice, though that red doesn't sit optimally against the fuchsia shirt beneath it. On the other hand, the contrasting yellow socks are great. This is fun kid stuff, I'll take it. 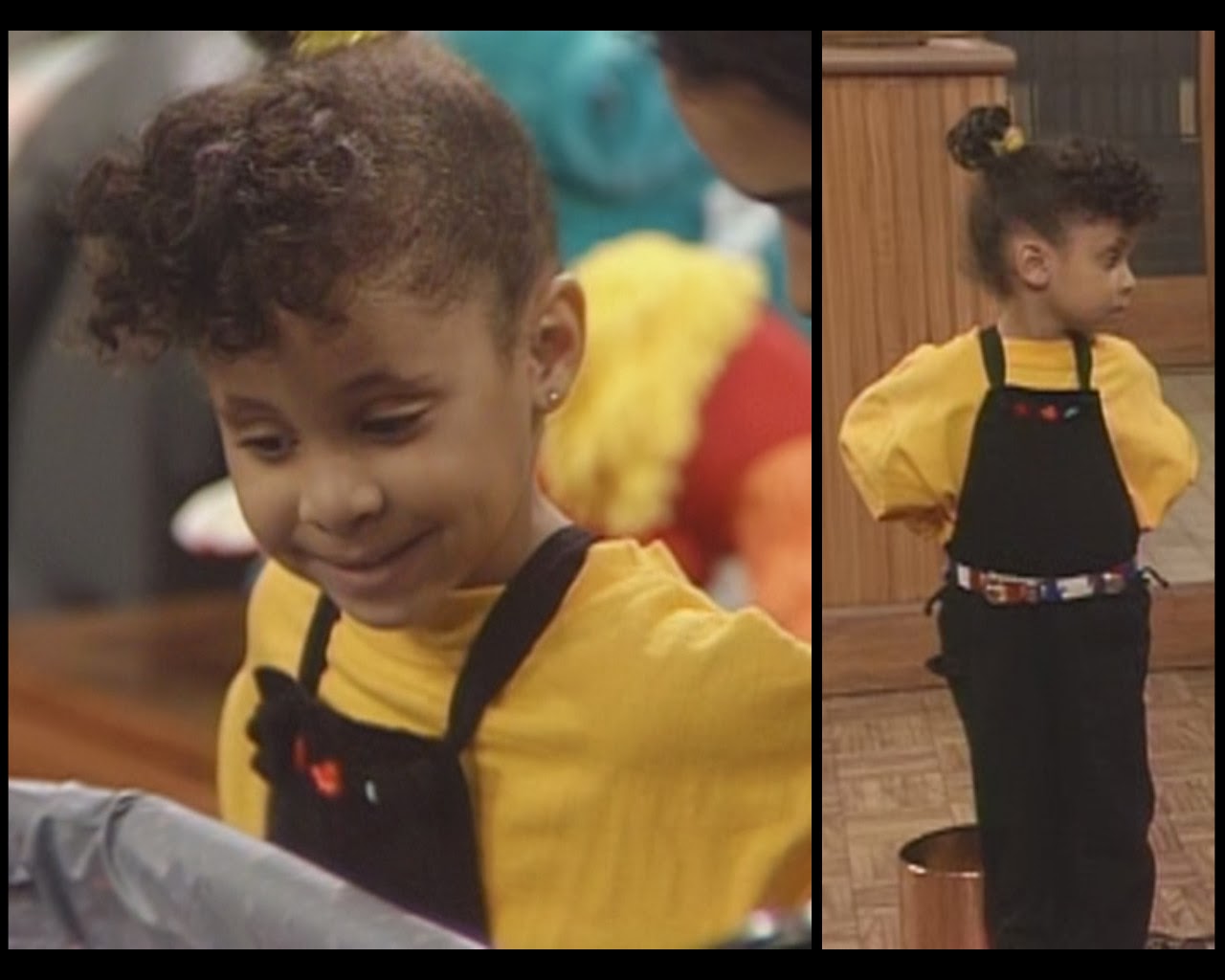 Getting stern with the kids.

When she helps out with the babysitting she sticks with the overalls, and revisits previous favorites of hers: raised detailing on the bib and a funky belt. These choices work for her. I'm a fan. 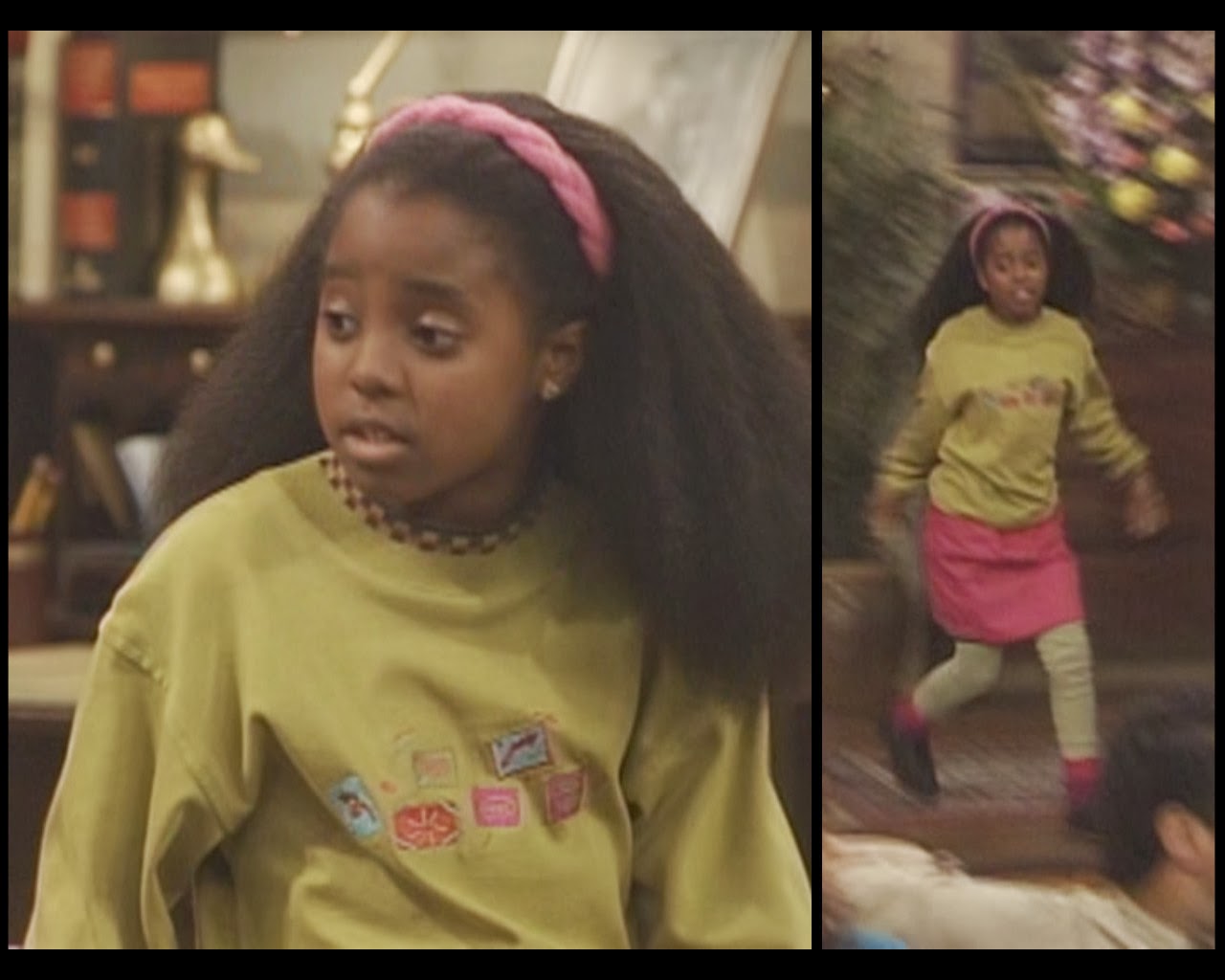 When Rudy first unveiled this shirt in this season's premiere, she kept it beneath a sweater to mask its true putresence. Fully revealed, we begin to understand the dastardly nature of the garment, especially when deployed in this manner. Its sickly green in tandem with the candied pink of her skirt, socks, and accessories is basically guaranteed to make some portion of the audience vomit uncontrollably. 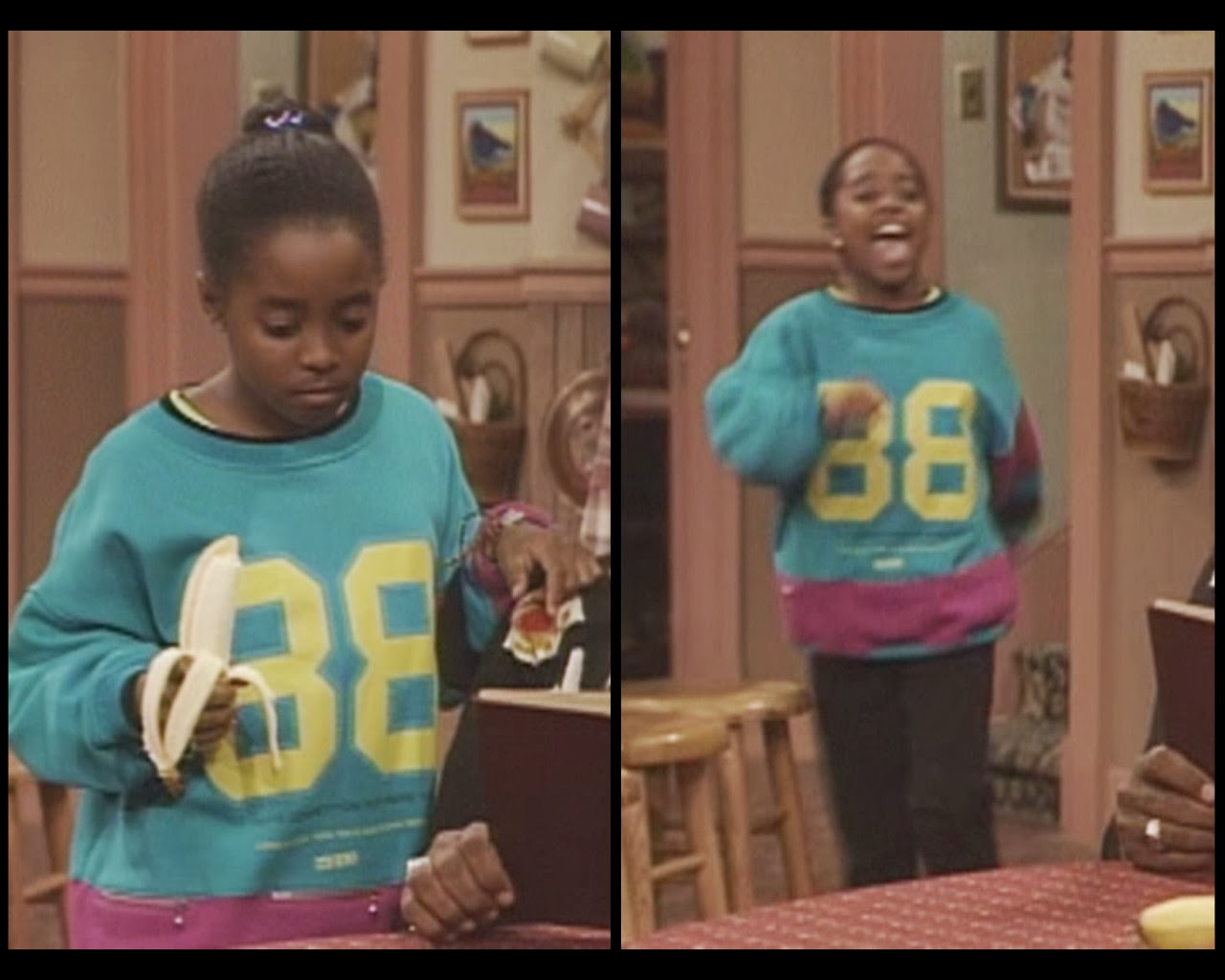 I don't get why the banana had to be inserted into she script.

Proving that some of the overlarge clothing from seasons past actually was purchased for her to grow into, she delivers a top last seen in episode #4.23. I like it better with the black sweats shown here than with the grays from last time. 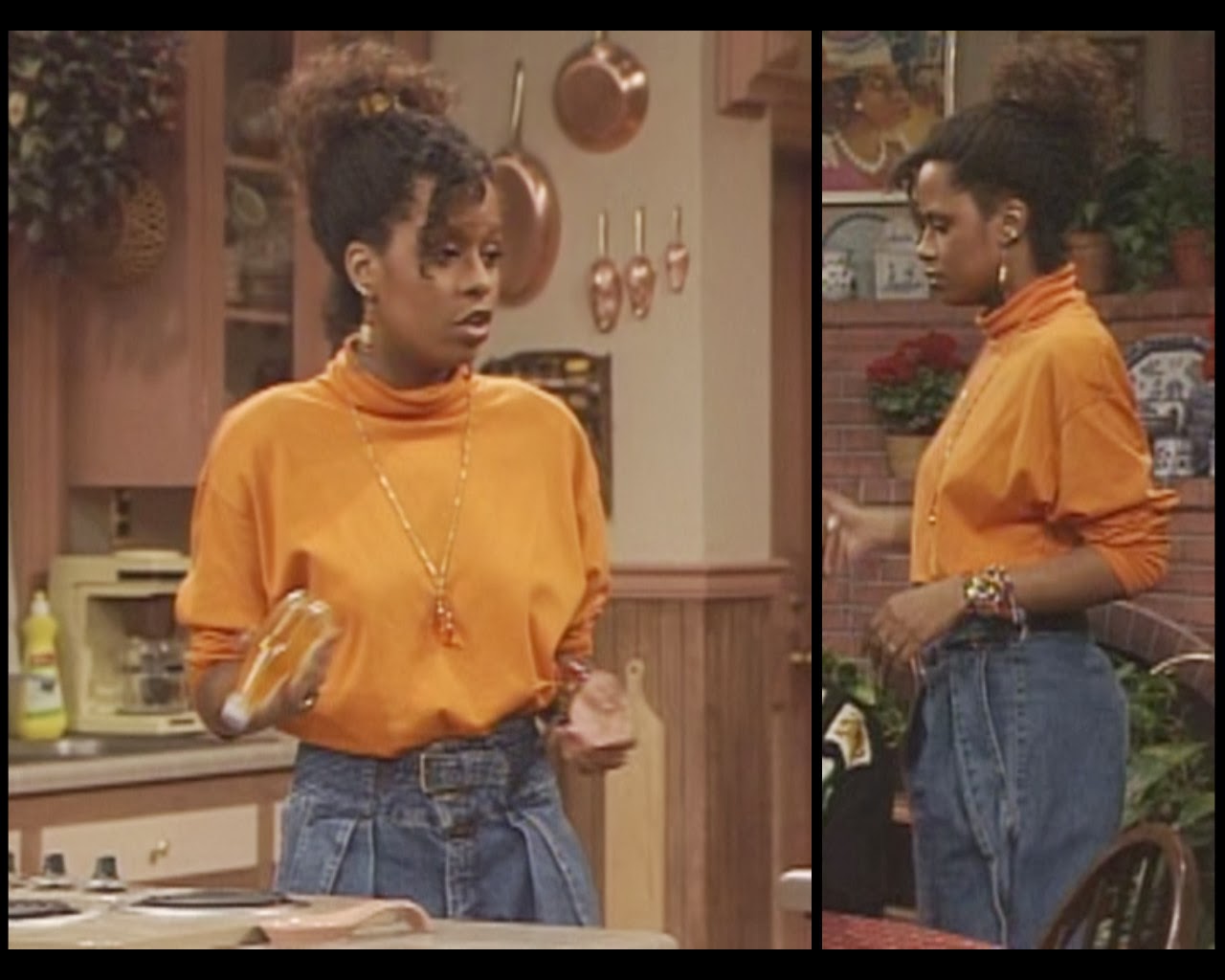 She matches her drink.

Vanessa only shows up once, but she brings it. Here's the thing: I want to hate everything about this. I've tried. It's all wrong: the bunching, the pouching, the pleating, the buckles. I guess the colors work, but other than that, it seems like it should just fall apart. And yet against all odds, despite the fact that the jeans are ugly and overwrought and the top is sort of lazy, I find myself loving the whole terrible thing. 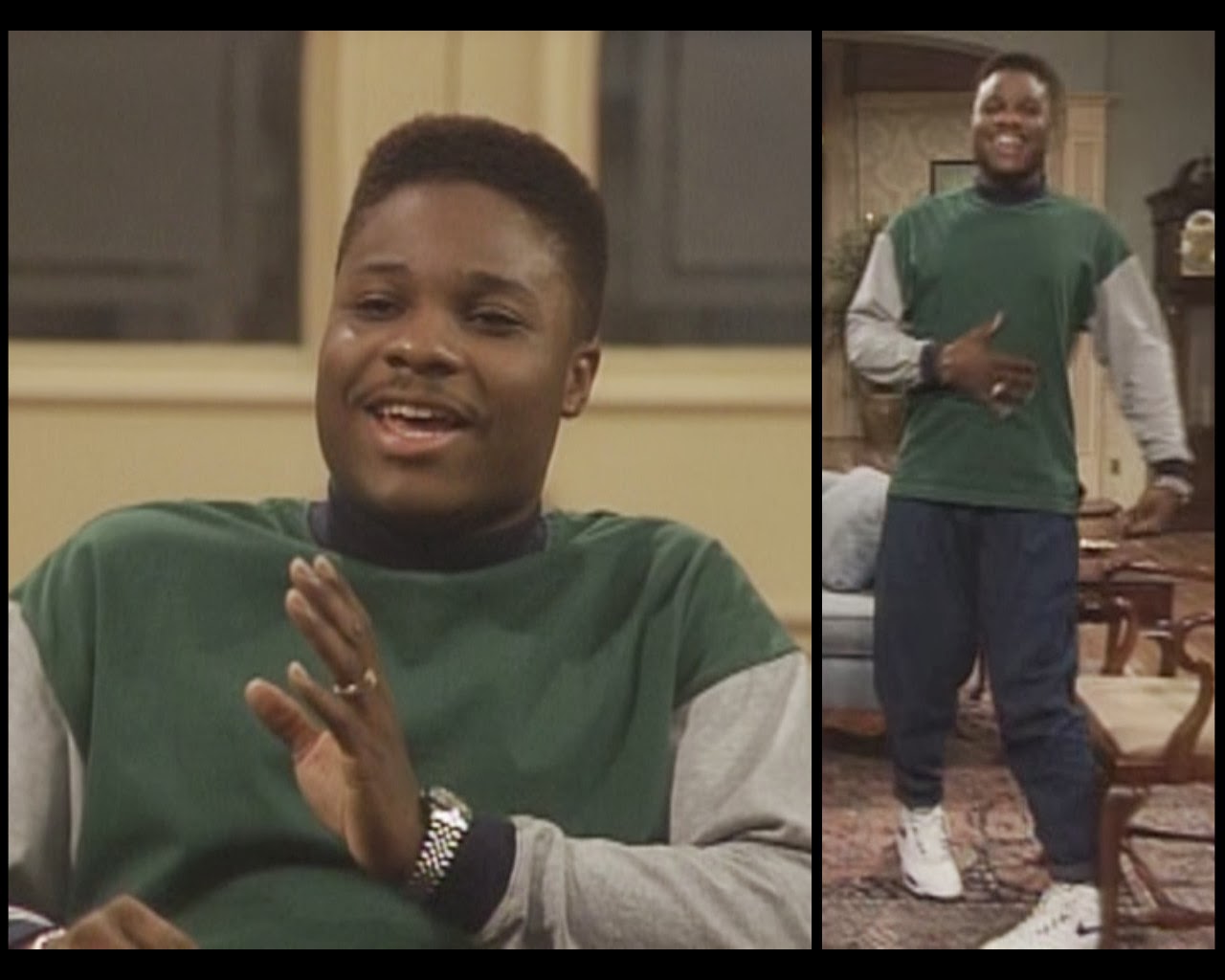 Can't even talk about it.

Look, Theo is broke. He can't afford nice clothes. I get it. I just have to give up hope. 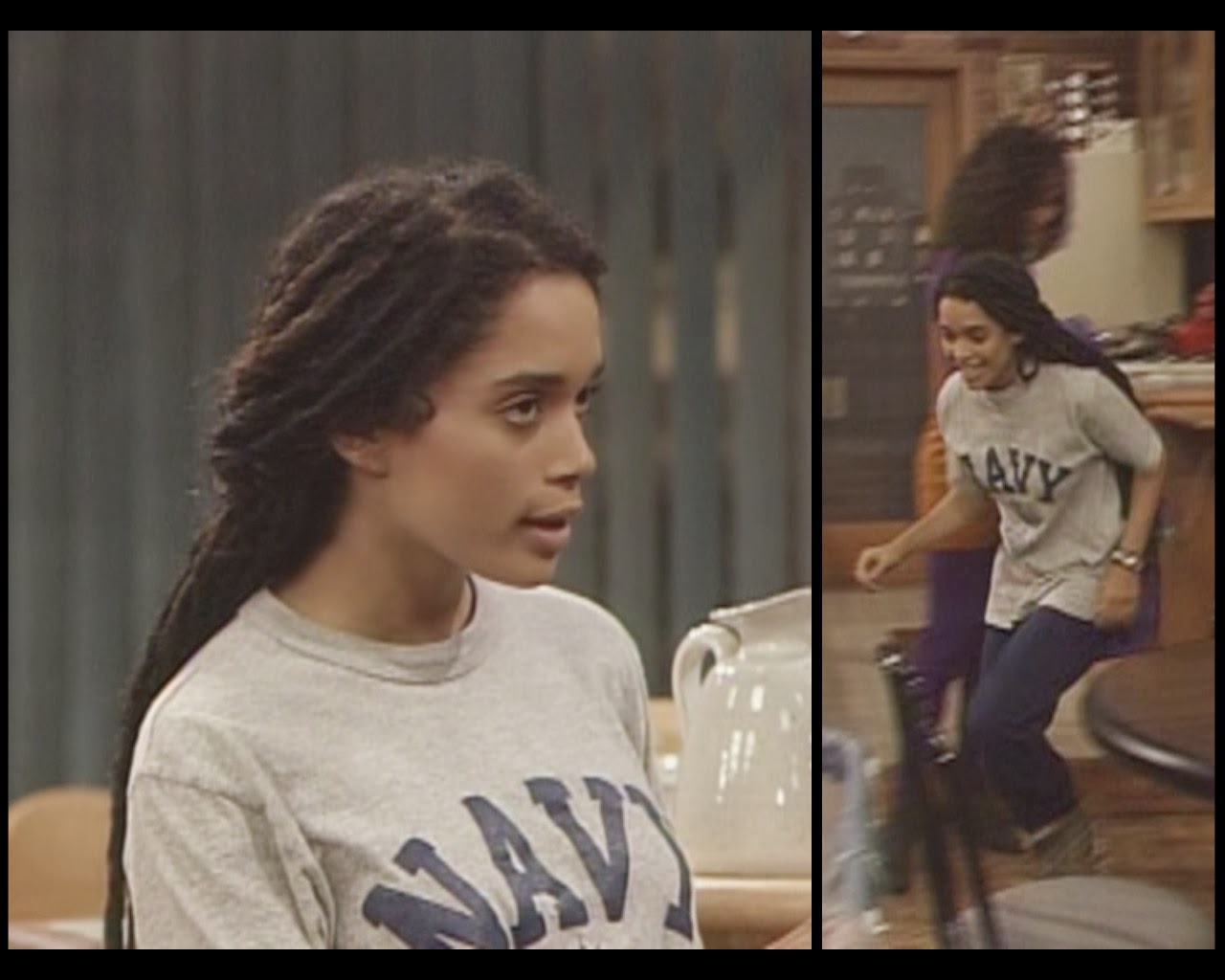 Nothing to talk about.

Denise, on the other hand, usually still holds up her end of the fashion bargain. However, since her first outfit remains buried under a heavy coat and her second creation is sweats and an old t-shirt, we're forced to move on without experiencing her usual expert abilities. 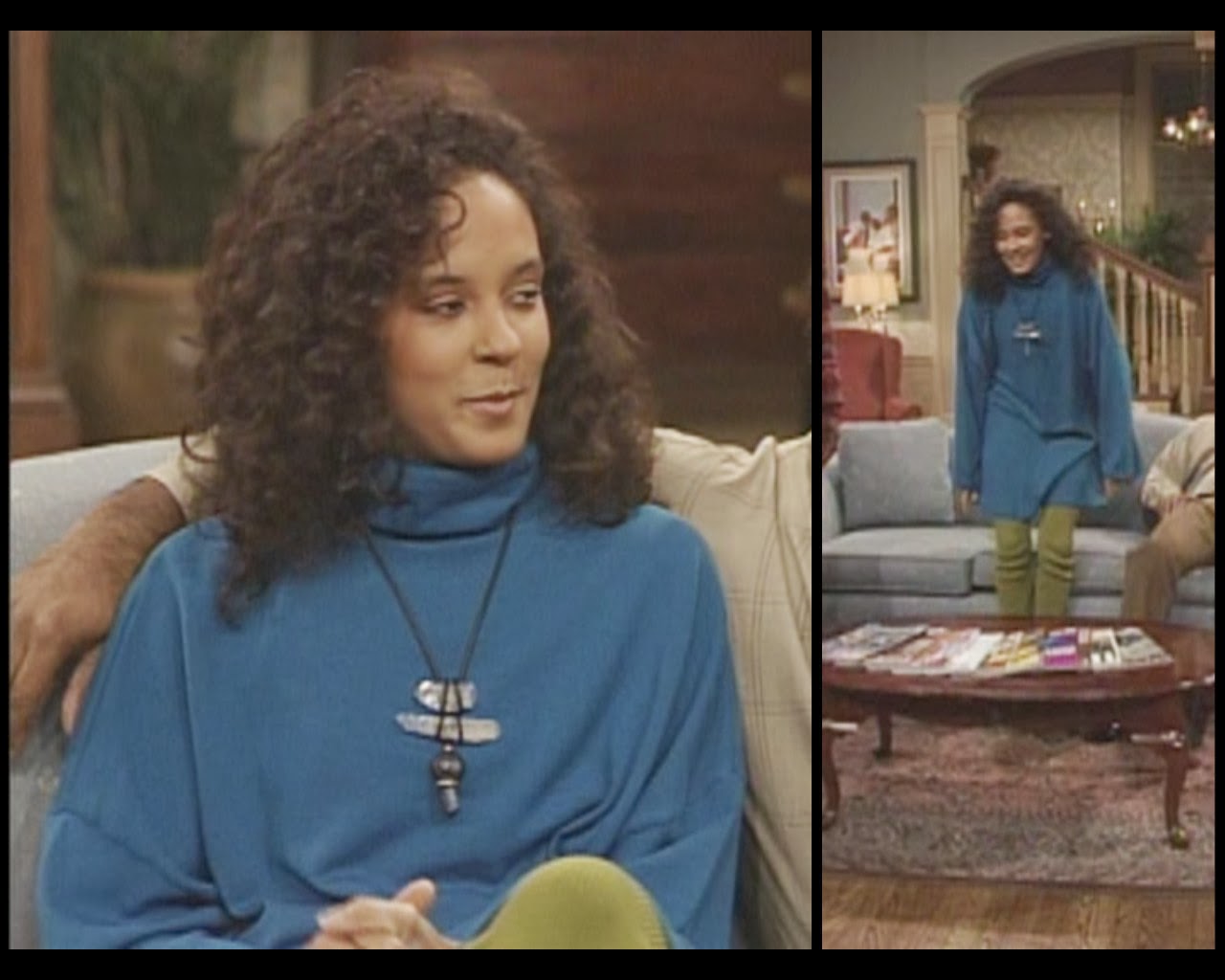 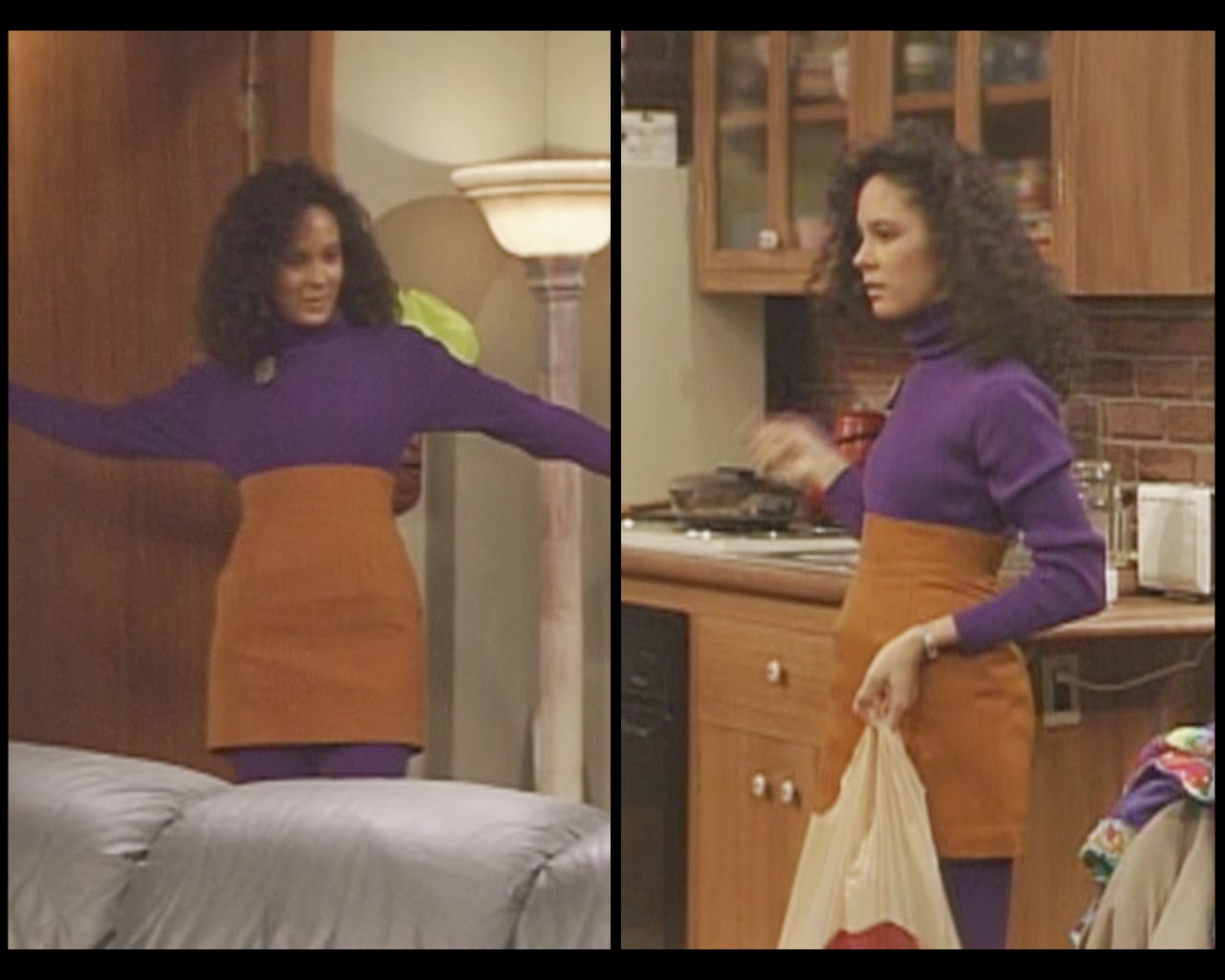 She's really into flat tones and odd skeletal reconfigurations today. And turtlenecks. While the last outfit served to shorten her legs, this one stretches them to almost comic lengths. There also appears to be some sort of jutting structure beneath her skirt to accentuate the sharpness of her hip bones, though maybe that's just a weird bunching in the material. Tough to say. I dislike the pin in both placement and design, and am essentially underwhelmed by everything she's got on offer this week. 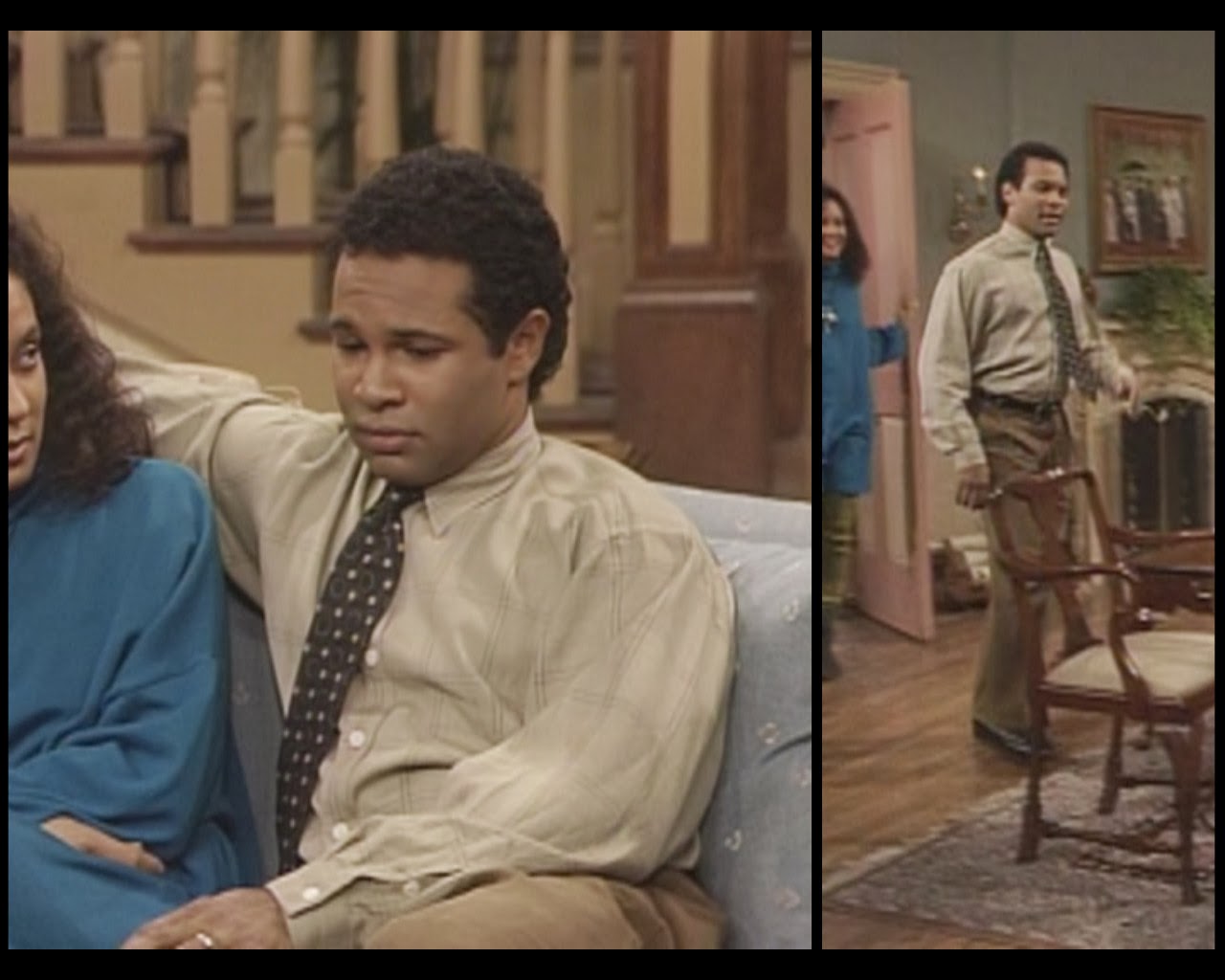 Marriage has really beaten him down.

Where was Elvin earlier? He can't have worn this just for dinner with his in-laws, especially considering that his wife is basically in pajamas, and it's equally unlikely that he goes to school so neatly attired. Either way, he looks unobtrusive in the beige business casual, though he could stand to be a little braver in his color combos. The tie is fine. 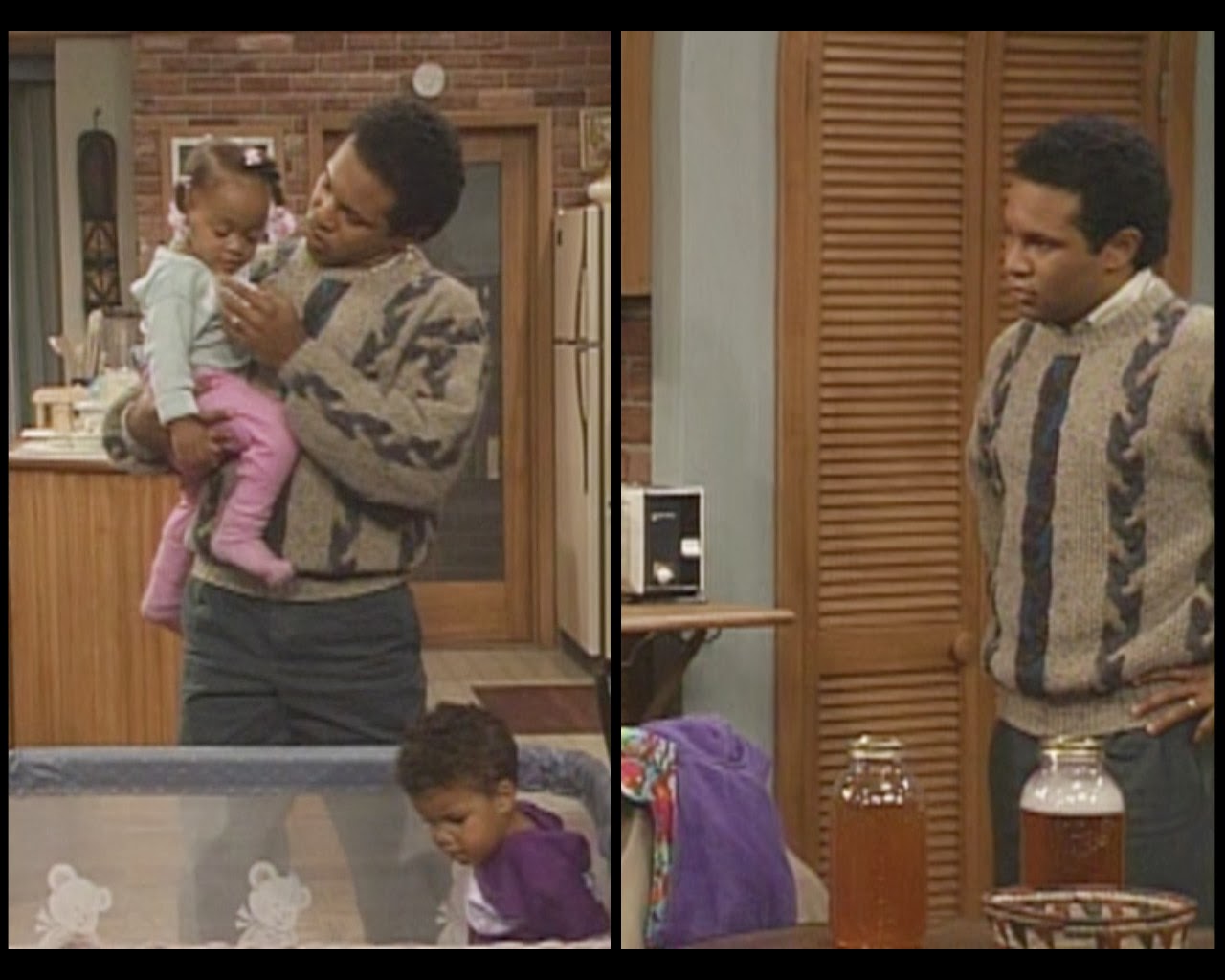 Maybe it's fatherhood that has beaten him down.

They're really working hard to dad him up these days. This is such a dad sweater! I do like that the deep teal of the braided pattern is reflected in his trousers. He hasn't completely lost it. (Not that he ever had much of it.) 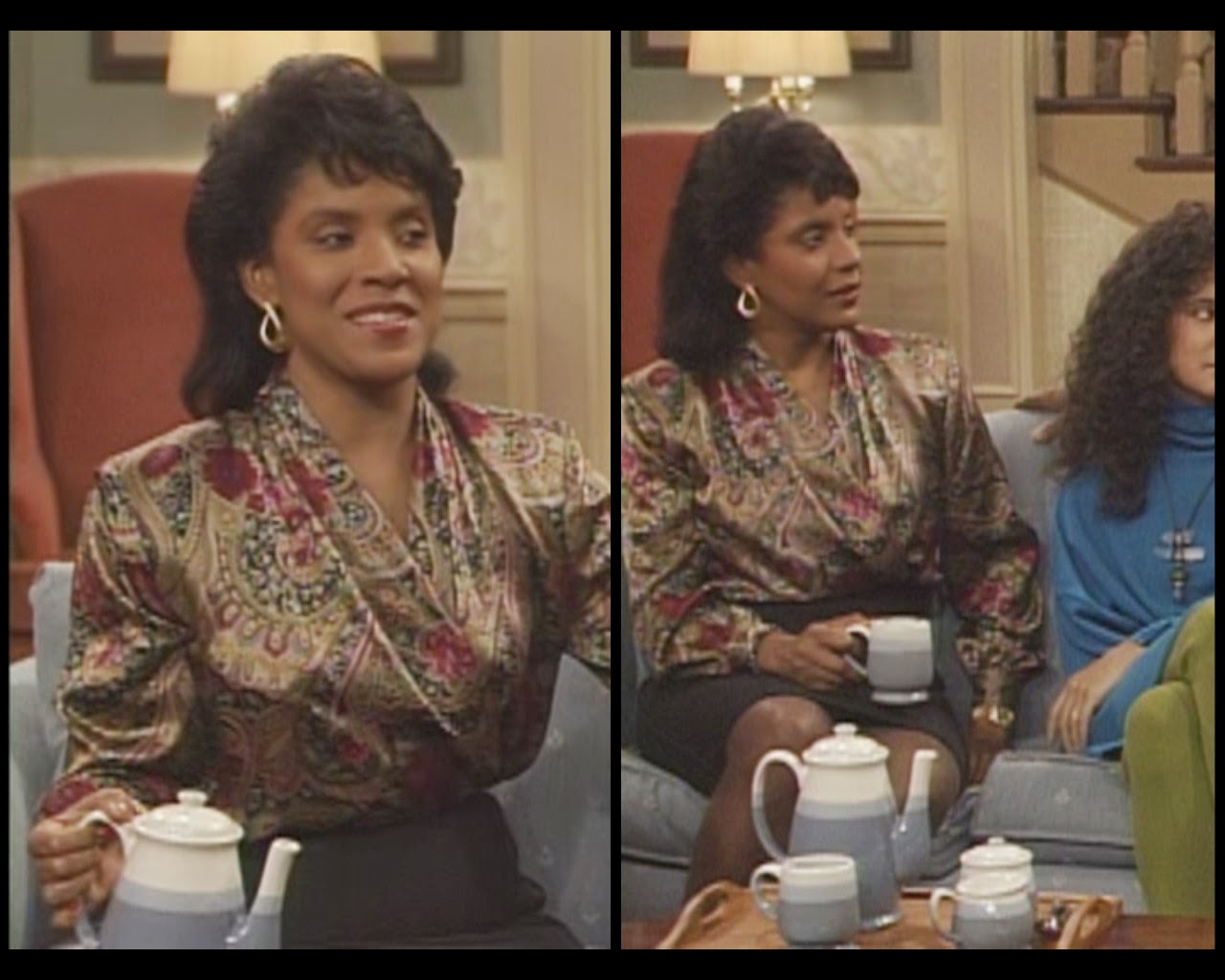 Don't speak. Just accept this metallic blouse as your lord and savior. 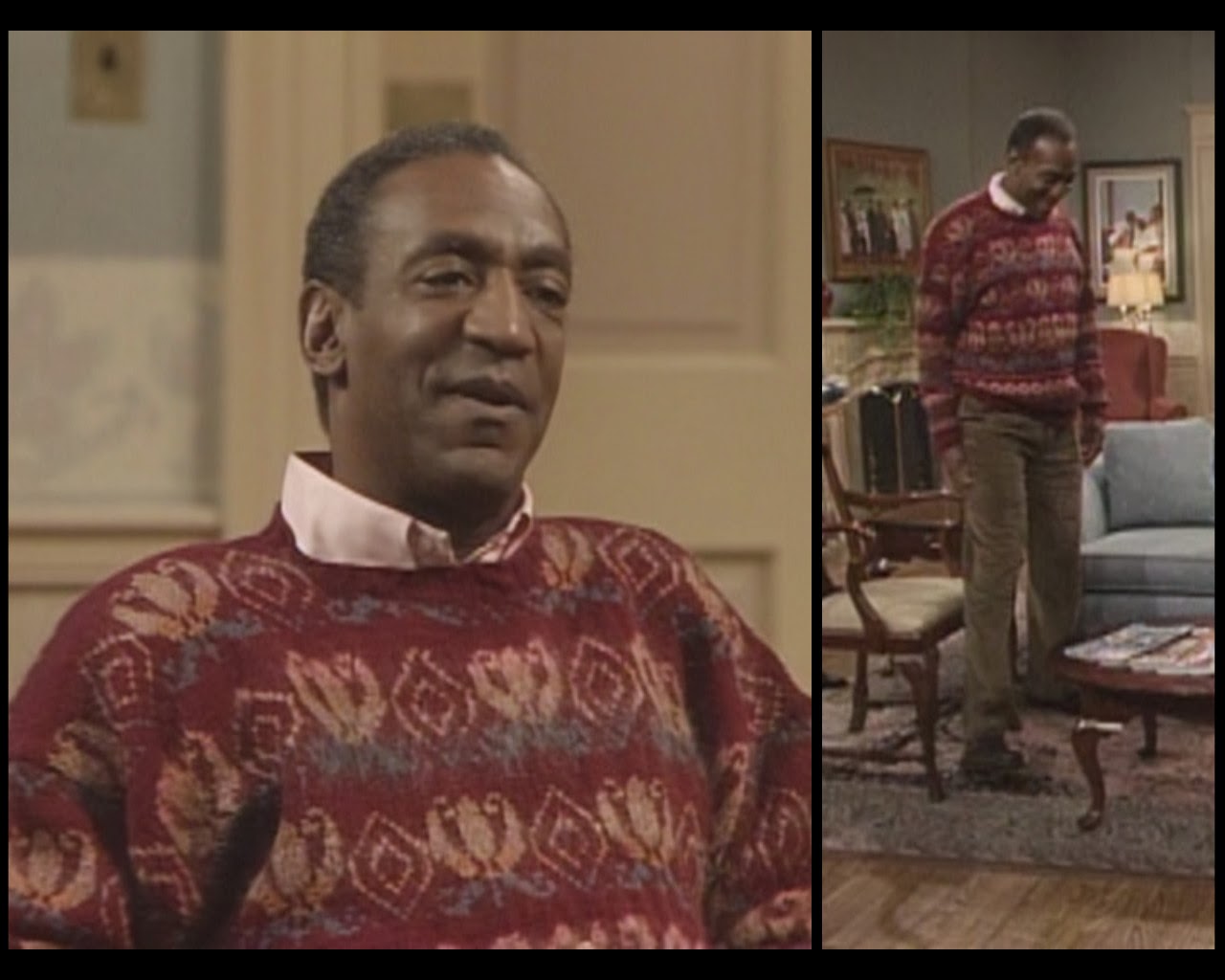 I know Cliff is generally making advanced moves, and I'm generally supportive of them, but the pink collar peeking out over the red sweater rubs me the wrong way. Otherwise he's on solid ground, though this is a pretty safe set of selections. 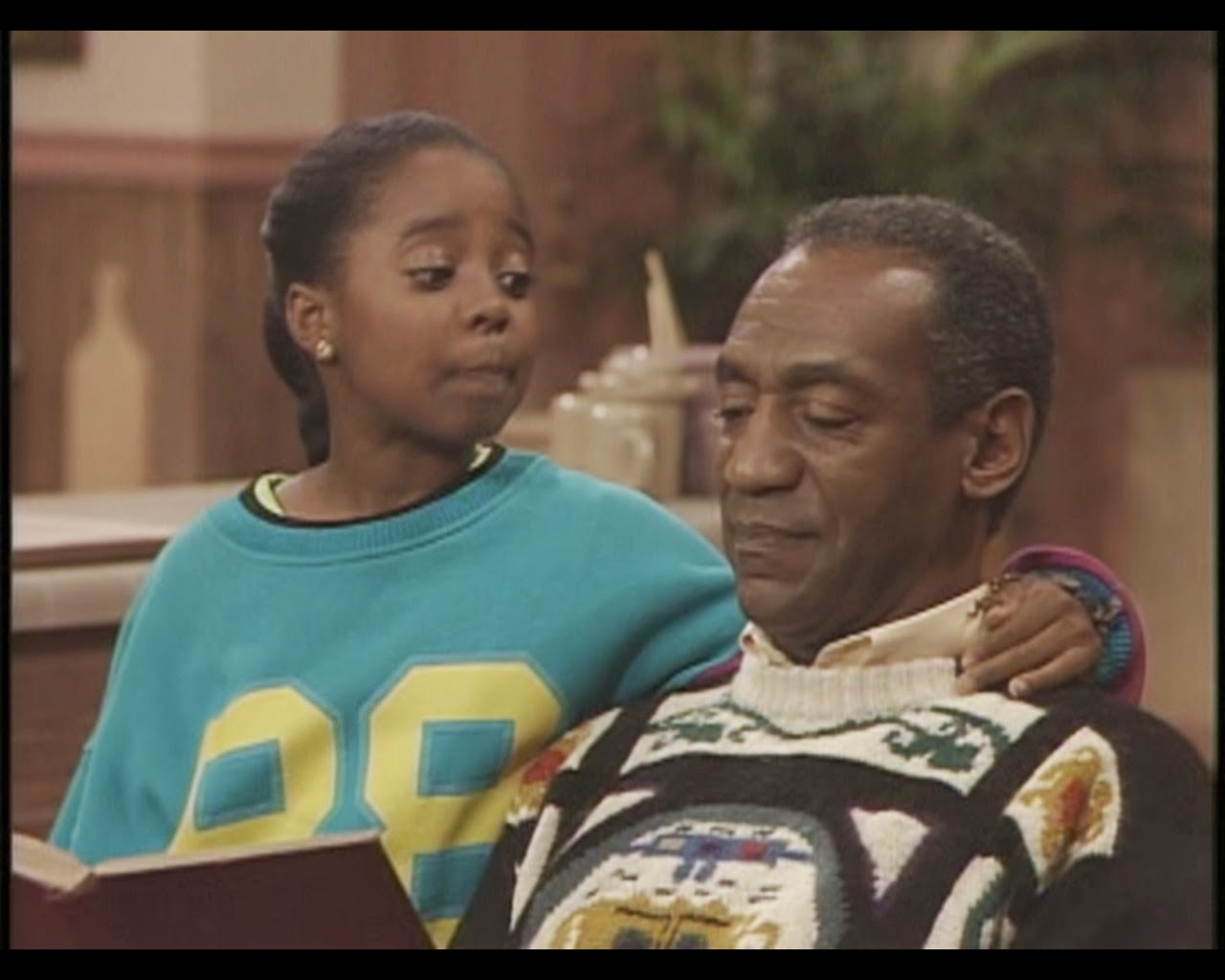 His second getup seems much stranger, but since he spends the whole scene sitting down and hiding behind a book, we can't really piece together the details. Maybe he'll bring it back later so we can get the lay of the land.

And there it goes: another episode down the tubes. I hope those of you dealing with the recent cold snap have plenty of layers to wear. Fashionably, of course.
Posted by Unknown at 12:48 AM