Martin had the opportunity to secure housing on a naval base, but Denise neglected to confirm the reservation, so they have to continue living with Cliff and Clair. It's a pretty thin plot, but there you go. 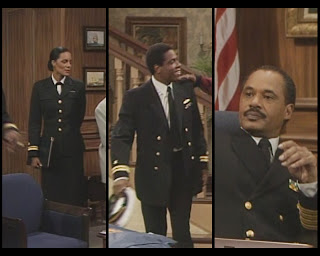 Martin and the two guest stars he interacts with all wear uniforms, which makes my job pretty easy. Look, everyone: uniforms! 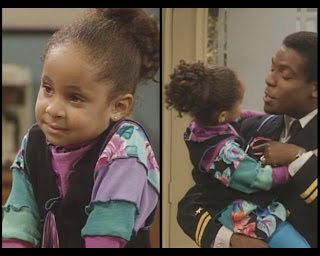 Still kind of in fast-forward.

Olivia ups the ante on cuteness by going full-on ragdoll with that sewed-from-scraps top. The mismatched colors and thick, uneven stitching are totally nouveau urchin. What a delightful moppet. 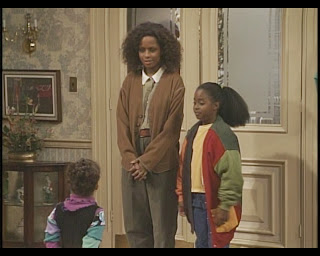 I'm taking Rudy and Vanessa as a unit today because there just isn't much to say about either of them. Rudy in particular is fading into nothingness with jeans and a yellow sweatshirt. There's some sort of weird ruffle going across her hips there, but it's so repellent that I can't ask you to acknowledge it. Her older sister has more of a point of view and appears to be dabbling in vintage menswear with those high-belted, voluminous trousers. I don't know that it was necessary for her to match her green pants with a green blouse, but it's not terrible. The contrast collar pops pleasingly. I'll give it to her, I guess. It's worse without the cardigan. 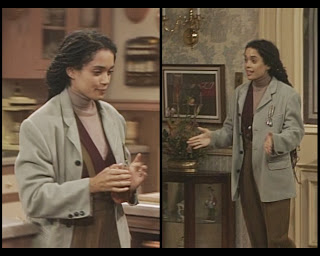 No Theo this week (probably for the best), so here's Denise. She's really the queen of the color story, as demonstrated by the odd combination of hues she's serving up. The pale mint and mauve kind of shouldn't work together, but they're grounded by the deep maroon and olive pieces. She never takes that jacket off, so I can't say precisely what's happening below, but her layering game appears to be on point here: turtleneck, then some sort of sweater, then an overalls thing, and then a blazer. It's an outfit that's at once highly polished and completely bohemian; she can wear it in the East Village or at an office meeting. I suppose it's not ideal for either setting, but it's acceptable in both, and that's an accomplishment. It's telling that she wears this when trying to impress high-ranking naval officers. When her husband wears his uniform, this is what she pulls out. 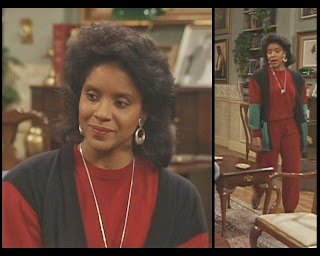 We didn't really need to put Clair in shoulder pads. Nor did we need to put her in Christmas colors. Pretty much all of this is wrong, from the overuse of head-to-toe red to the roominess of all of the pieces to the horribly basic color blocking. These shades don't even match particularly well. I hate that this happened to her. 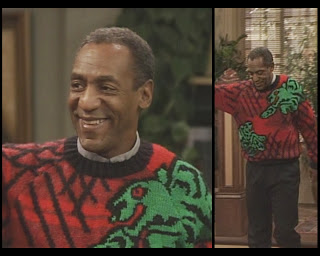 In a rare overlap, Cliff wears essentially the same colors as his wife, though he uses his to tell the story of an epic struggle between two jade tigers. The collar is loafier than I'd like, but it's otherwise acceptable. For him, anyway: don't you go thinking you can pull this off. No offense, but most of you probably can't.

The new year is creeping up on us. I hope you all get the celebration you want.
Posted by Unknown at 10:10 PM