First off: I'm late posting again, and I have no good excuse for that. Sorry!

Now, on with the blogging. This is one of the episodes that people tend to remember (or at least I remembered well): Vanessa goes to a party and ends up getting drunk because her friends pressure her to do shots while playing the Alphabet Game. To teach her a lesson, her parents force her into practicing with them and even push Rudy into taking a shot before revealing that the "bourbon" they're drinking is tea. I'm not actually sure how this teaches Vanessa anything, but it's a fun scene! 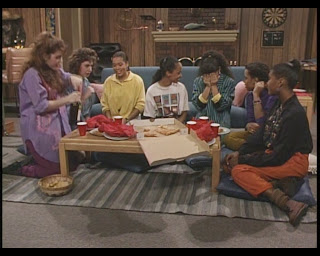 No one's going for that last slice?

There are a LOT of bonus ladies in this episode, and I'm not going to go over them in any great level of detail because I just don't think anyone cares. We'll hit the important ones. This image at least lets you see everyone, even if I don't offer in-depth commentary. Fun fact: the girl in the orange pants is Ensa Cosby, Bill's daughter. 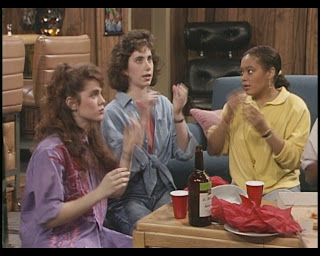 Janet's here in layered yellow creation. Not her best effort. The host of the party, who initially brings out the booze, is the one in lavender. Basically everyone in this picture looks how you'd expect a teenager in the '80s to look. Get it while you can, ladies, you'll be in the '90s in a few months! 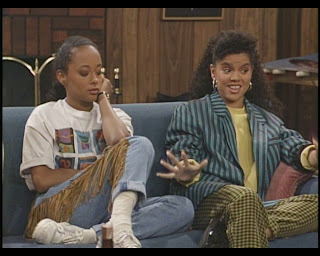 Ugly outfit contest! We all lose.

Kara returns with a creation that probably wasn't intended to be a used car salesman costume, but there it is. Too many loud colors and bold patterns, lady. Rein it in. Next to her, the bored-looking one (the scene actually calls for her to be bored, so good job!) is wearing fringed jeans. I am morally opposed to fringe on jeans. Morally. 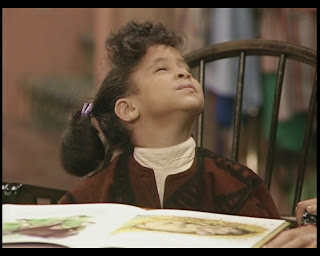 You can't tell from the picture, but Olivia is imitating a cow here. She's also proving that she can read. She's also seated at a high (to her, at least) table, so it's tough to tell what she has on. I'll offer some tentative approval of the detailed stitching on the off-white garment. Really, the turtleneck with a dark, creatively patterned top has potential. She probably looks great. 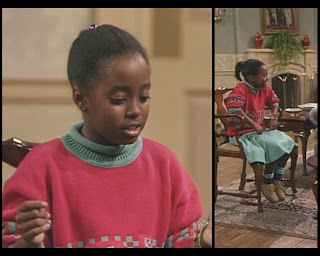 It better be close to Christmas if Rudy is wearing this much red and green. 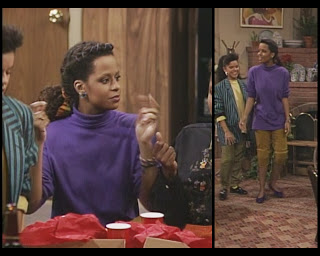 That string or thin ribbon through the front of her hair is top-notch.

Purple is a good color on Vanessa, and she's on the right track with those pants, though I'd be happier if they were a more yellowy ocher than this greenish shade. But hey, solid effort. 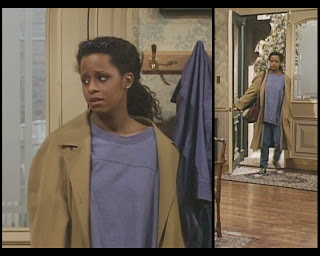 Oh girl, I know that feeling.

Her hangover clothes are basically a faded version of yesterday's look. SYMBOLISM! 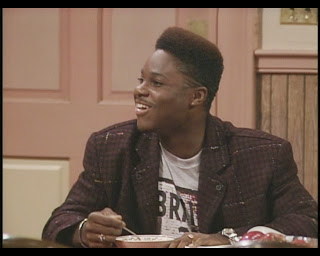 Theo drops by for a quick scene to mooch off his parents. He's trying too hard in every possible way. 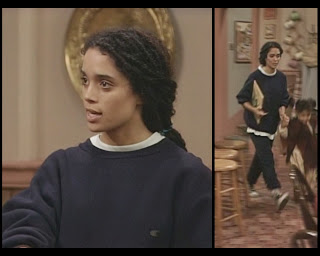 Usually I can count on Denise in these moments, and here she is letting me down with sweats. From you, Denise? This hurts. 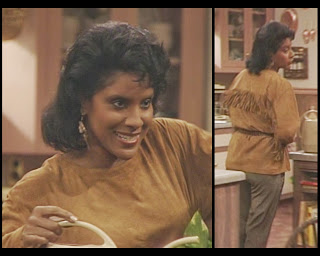 Clair starts the episode off in a lot of fringe. It's not great. The fit on these garments is weird, too, particularly the top, which is belted too high and ends at the wrong place, changing her torso's shape in unflattering ways. There's not much worth saving here. 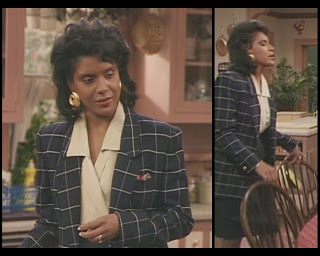 Getting ready for WERQ.

This is mostly a repeat of her episode #5.26 look, but with a new blouse subbed in. I prefer the other one, honestly. Also, she's swapped her jewelry for a clashing pocket square, which I would qualify as another bad choice. At least the earrings are phenom. 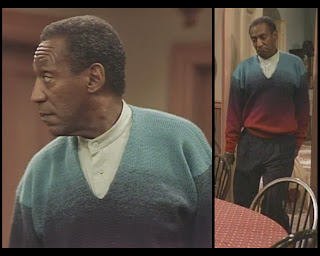 Oh Cliff YES. This gradient sweater is giving me life. I'm 100% in favor of it. This might be his best sweater ever in terms of actual taste, though it doesn't rate highly in the pantheon of legit Cosby sweaters. I might have preferred an actual collar on the shirt, though. 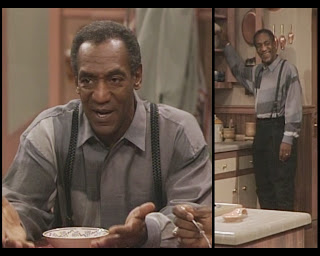 Cliff also dips back into episode #5.26 to repeat the braided leather suspenders. His pants seem to be the same, too. While the shirt isn't wildly different in terms of tone from his previous offering, it's stepping into new directions pattern-wise. I can't really get a handle on whether there are random patches of dark and light gray bleeding into each other, or if maybe there's an overarching structure that I can't read into. I'd almost rather there be no clear design; I like the idea of a haphazard application of hues. It makes sense with his other fashion choices.

And there we have it. Another week down, many more still to come. Again, really sorry for being late with these lately. I don't have a good excuse.
Posted by Unknown at 1:37 PM