You guys, how great is it to have Denise back? Today, she appears home a week earlier than her parents expected. She's also gotten married to a Naval officer with a child from a previous marriage, and has somehow neglected to mention any of this to her family. Like, they don't even know she's been seeing someone, and suddenly the happy couple and their 3-year-old daughter appear in need of a place to live. So, like, drama y'all. 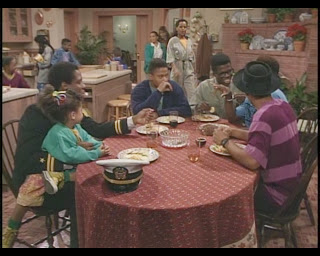 The episode ends with a party in the kitchen. Theo, Vanessa, and Rudy all have friends over. While I hate to skip all the semi-regular characters, most of them don't have lines or get much in the way of screen time, and isolating them for individual images was proving too difficult. No one's doing anything that exciting apparel-wise anyway. 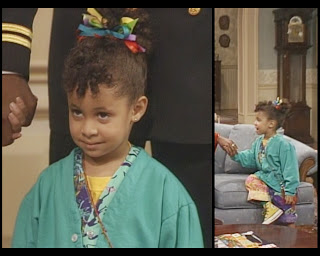 She's so cute I'm surprised they didn't write Rudy out of the show completely.

Since she's in the opening credits, Olivia has become the youngest member of the regular cast, and thus will come first in these recaps from now on. She's big on bright colors and loud prints. As the endearing but sassy youngster character, this makes a lot of sense. 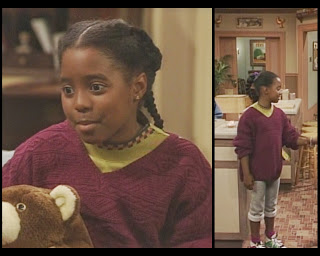 If it's cold enough for Rudy to be wearing a sweater over a thick shirt, then how is it warm enough for her to have rolled her pants up to the knee? I love the boldness of her color combo up top, and I could even see the giant sweater working for her if the lower half weren't so lackluster. She goes from patterns and textures to sweats and bunched socks. Not gonna cut it. 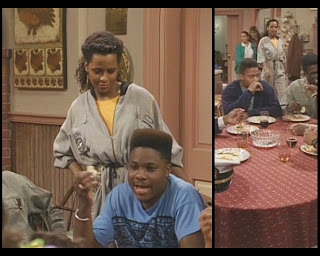 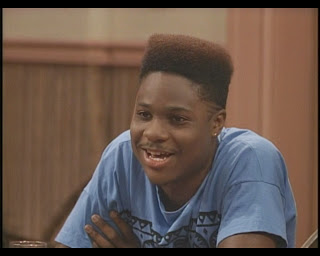 Theo's exceptionally ugly jeans are shown only briefly as he dashes across the kitchen, and the shot is so blurry and crowded that it's tough to find much to say about them other than "ugh." The t-shirt, while medium in color and questionable in print, is largely inoffensive. It's the hair choices that distress me here. Like, that mustache? The lightened top of his too-tall flat top? The shaved lines? And please tell me the rat tail ins't still there. (I'm pretty sure it's still there.) 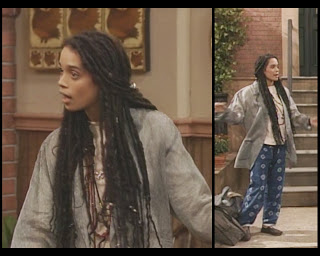 Couldn't be happier to see her.

Oh, Denise, it's so good to have you back. Her style has gotten exceptionally relaxed, which I think is intended to show us that she's found her true, earthy self while traveling through Africa. Beyond the hair, she's gone for clothes so formless and gauzy that they could be pajamas. At the same time, she's injected some fashionable flair, for instance the many necklaces and the bold print on her pants that I suspect is local to wherever she was staying last year. I'm also loving that the silvery shirt is translucent. It's not her absolute best work, but it's a great example of how to think carefully about your clothes and yet look like you're not trying at all. 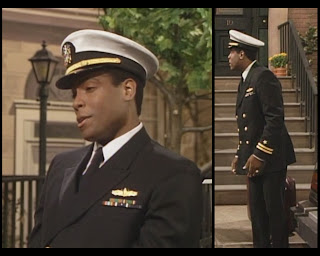 Her husband Martin spends the whole episode in his uniform. He looks great, but there's no point in critiquing it. Though, as an aside, does anyone else have trouble believing that Denise would marry a military man? That choice would seem to conflict with her values, no? 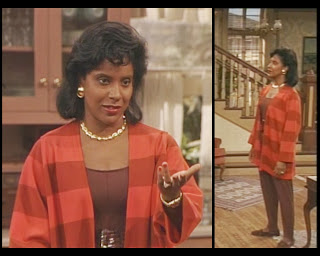 She's the type to hype a stripe.

There are things I don't adore about Clair's outfit. Stirrups, for instance. But overall this is a solid showing for casual, around-the-house attire. The one-piece look is great when you've got the body for it, and she belts it at the right spot. At the same time, she prevents it from being all "I'm-a-sexy-cat" by opting for the boldly striped cardigan to drape over herself. The gold jewelry heightens it further. I feel good about this. 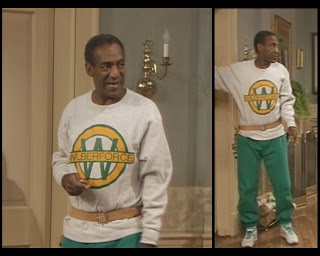 Getting his fix on.

Taken by surprise while performing repairs around the house, Cliff is in sweats when his daughter arrives. That's fine and all, but the fact that he hasn't changed by the end of the episode when he's leaving to go out to dinner is distressing.

And there it is, our season 6 debut! I'm sure there's lots of good fun ahead. Stay tuned.
Posted by Unknown at 1:05 PM