Change is coming to the Huxtable household, as shown by the opening sequence. Denise returns from her extended absence, bringing back with her two unknown quantities. This season also occurs during late 1989 and early 1990, meaning that the influences of a new decade (that we've already seen emerging) will become even more prominent. Those notes aren't strongly present in the classed-up credits, but there's still plenty to see. 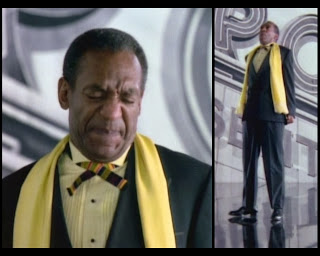 I can see him thinking in Bill Cosby noises.

The episode opens with Cliff in a spiffy tuxedo in a stylized depiction of the sidewalk outside the Apollo Theater. The rendition of the theme song is exceptionally upbeat, and the cast dances emphatically. His appearance immediately sets a more formal tone, however: he's wearing a tuxedo and a scarf, which is about as dapper as a man can get without sitting on a throne. At the same time, he keeps a sense of joy by opting for a pale yellow shirt and butter-colored sash. As usual, his tie is a thinner variant of the continental tie fashioned from kente cloth. He looks spectacular. 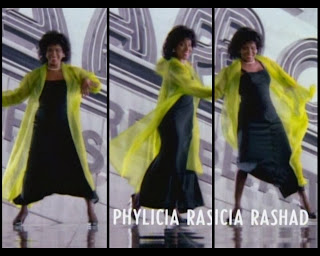 In spins Clair, matching his color scheme with a sleek, silky black dress and a diaphanous coat that catches the buoyancy of her movement. She looks elegant and refined while still giving off a sultriness. That vibrant yellow prevents the dress from seeing too somber. It's a knockout presentation. Also, this lady can dance. 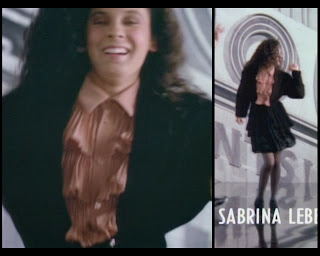 Sondra and Elvin are next up in a coupled jam-out session. I had assumed that the entire group would rock the same palette, but this blouse immediately dismisses that notion with its subtle peachy pinkness. As a thin woman, she handles voluminous garments well: the embellished top and tiered skirt add to her frame in the right places and accent her actions with their motion. I'm less sold on the jacket; while a wide sleeve can work, I'd like for it to be more tapered at the wrist if not a little narrower overall. Still, this is pretty great offering from her, and hopefully is indicative of an overall upswing in the items she's given. 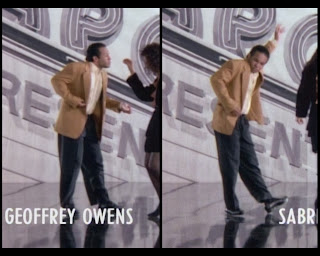 Not a dancer. Probably also not a guitarist.

Elvin isn't given a close-up, so the details on his outfit are a little fuzzy. What we can tell for sure is that he's committed to a wide cut on those trousers, which is a shame. The jacket isn't shamefully big, but it could fit better. The colors are fine, but this is overall not exceptional. Also, putting him in that beige coat was a risky move, because the black shoes don't really match the garment, but brown shoes would look terrible against the floor and backdrop. 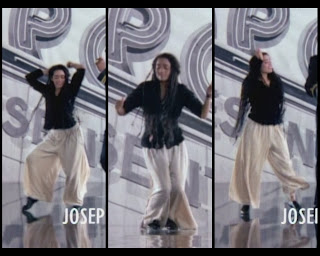 Denise is back!!! Who's excited? The clothes say "free spirit" with their flowy, sloppy-chic vibe. She's all over the dressed-down aesthetic. Adding those past-the-waist dreadlocks and men's shoes to the mix, she's letting you have it with the non-conformity. As usual, I love everything she's doing. 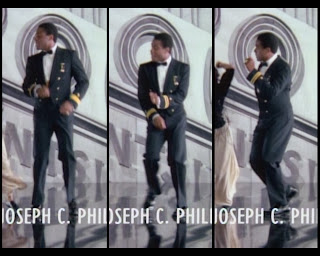 But who in the world is she dancing with? If audience members were particularly astute, the might have remembered Joseph C. Phillips as one of Sondra's dates from episode #2.4, but I'm guessing that without an internet full of spoilers like we have today, they were uncertain of who this person might be. Putting him in his Navy uniform is smart in that it clearly establishes part of his backstory, but for someone watching the season 6 premiere, it must have been weird to see Denise and some military man bopping around together. (Since it's a uniform, I'm not going to comment on the clothing.) 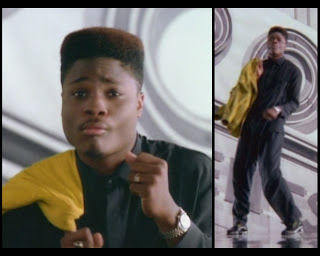 Really with that hair? And I know you still have that rat tail.

All black is a smart look, but Theo, like Elvin, is going a little wider than I'd like with his tailoring. I enjoy that he's bringing back the yellow accents, though. I can't comment on the blazer without seeing it on, but I'm loving that there's a matching zigzag in his socks. (There's a close-up of them, but I didn't bother catching it; you should be watching the show along with me anyway, it's good stuff.) 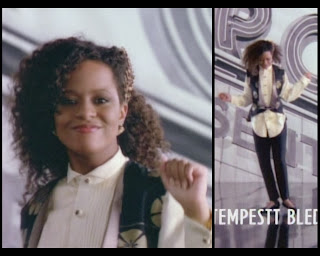 I assume this is what parents feel like. One day you turn around and your little girl is a young lady. That said, I'm super into Vanessa's outfit. She rocks the tomboy chic maybe even better than Denise did at this age (though she's leaning less heavily on the fashion-forward aspects than her sister). But the men's shirt with the fancy buttons and cuff links looks phenomenal on her, as does the vest with the slight outward flare, and the slim trousers are perfect. This is a great template for a fun party outfit. Go out dancing like this. You'll kill it. 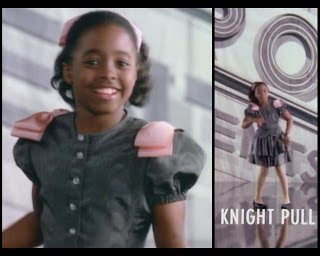 Speaking of watching kids grow, look at this one! Rudy is getting to the point where they can style her a little less childishly, so I think this dress is a little too foofy for her. The bows on the shoulders read unnecessarily princessy, especially given her character's free-thinking ways. Not that feminists can't be ruffled; I'm all about wearing whatever you want to wear. But she gets a lot of puff sleeves and frills, and since she's almost as old now as Vanessa was during the show's first season, there doesn't seem to be a need to force the youth angle. 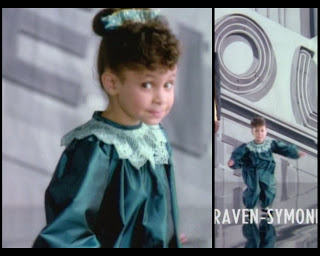 OK, first, I just need to get this off my chest. To Raven-Symoné's parents: you don't put an accent over a silent letter. That's not how accents work. Why did you do that? She's also the second new character to appear in the credits, which is likely creating further confusion for some viewers. Such mysteries! It's kind of a weird but wonderful look she's got going on: the color is fabulous, and she looks kind of like a clown or a pillow, but definitely a high-end clown or pillow. Like, the most expensive one of those you could get.

And that's that. So much to look forward to this season! I hope you're ready. I'm probably not.
Posted by Unknown at 8:00 AM