This is it: the end of the fifth season. Don't worry, there are still three more to go, this blog isn't closing down any time soon. To set the stage for summer break, the show focuses on Theo's quest to swindle $1,500 from his parents for a trip to Egypt. They really shouldn't have given it to him. He's a C student who has done absolutely no planning or saving. Unearned rewards aren't going to teach him to better himself! 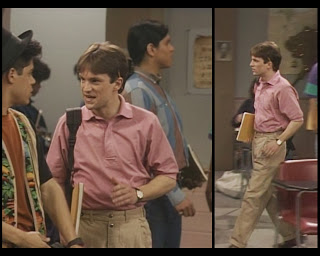 L.L. Bean There, Done That

The story involves many of Theo's classmates discussing how they're definitely going or not going on the trip. One of them is this guy, who needs a belt. Seriously, don't tuck in your shirt without a belt, people. 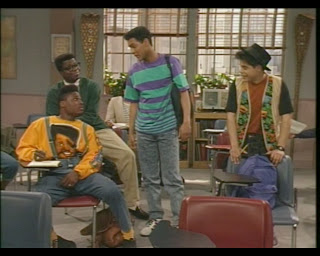 At least someone in this school has a job.

The man in the center is not going to Egypt. He also doesn't get a close-up. He also doesn't dress well. He also apparently has a side career as a cameraman, according to his appearance in episode #4.23. 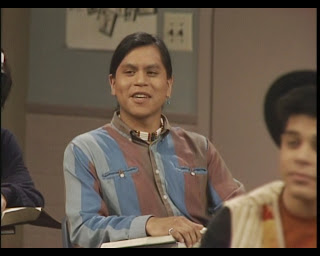 Things get a little weird this week when Theo's professor has the students play a guessing game about her ethnic background, and people uniformly guess their own race. This is the Native American man who correctly intuits that she's also Native American. If I told you "Native American day player in an 80s sitcom," this is the exact image that would jump into your head. Thanks for the stereotypes, costume department! 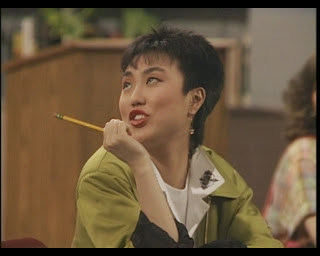 This hairstyle is back. I've seen it and I hate it.

The Asian-American woman guesses Chinese, Japanese, and Korean. She's got a pretty smart little coat on. 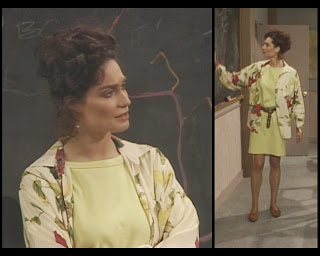 Atlantian? Martian? Fudge Ripple? WHAT IS SHE?!?!

This is Professor Grayson, the ethnically ambiguous woman in question. (She's Cherokee, Irish, and African American, in case you were curious.) I like her in these light, springy colors, though I think she's doing the baggy top thing all wrong. As a teacher, you don't want your clothes to be overtly form-fitting, as that's inappropriate, obviously, so the loose shirt is a nice way to make the dress more conservative, but something about this proportion is neither fashionable nor professional. Given the work context, she probably should have put on a blazer instead. Oh also, she works part-time as a cop, according to episode #5.24. 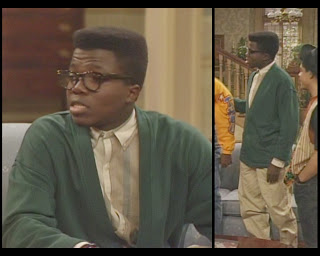 What is he going to contribute to an archaeological dig?

Harold is immensely in favor of the Egypt trip. He's also immense in general with the saggy cardigan and khakis. Get it together, dude. Loving the color palette, though, particularly that subtle blue stripe in his shirt. So this isn't entirely unsalvageable. 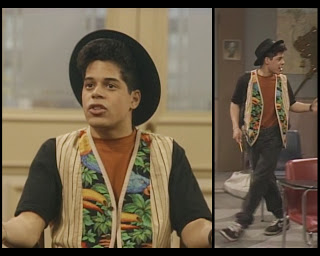 Lou's commitment to that hat cannot be questioned. I applaud his commitment to brown/black pairings, too, because I love when those work out. But I'd rather lose a toe than say something nice about that vest. It's an affront. 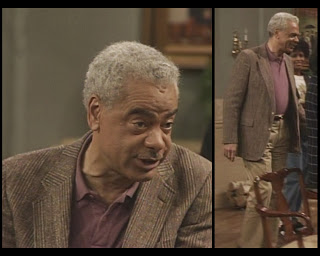 He's literally only here to make assumptions about someone's background.

Poor Russell never gets new clothes. This is his episode #5.9 outfit with the sweater removed. While we're talking about his appearance late in the episode, let's go over what happens while he's there. Though Cliff rightly suggests that questioning people about their heritage upon first meeting them is somewhat problematic, he nonetheless engages in the second game of "What Is She?" to be played that day. Then the rest of the family enters and plays the game a third time! Not once does anyone ask Professor Grasyon about Egypt. It's a crazy script devoted almost entirely to talking about one woman's racial makeup. 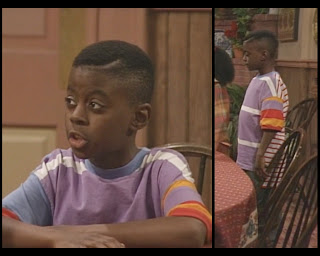 Against all odds, I'm kind of into Kenny's shirt. I wish I had a picture of it, but the best part of the garment is that there's a little blue flap with white stars on his butt, which makes the whole back into an American flag pattern. Cute, right? This would look like crap on an adult, but it's great for a kid. 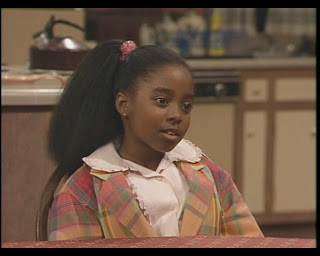 Is it Easter already?

What, you think Clueless invented plaid blazers? Think again. (That ruffle action needs to get toned down, though.) 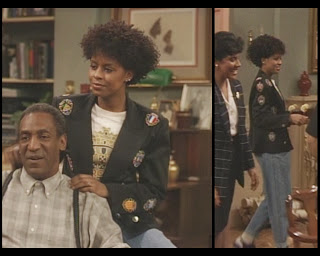 Not there, but getting there.

Those jeans, Vanessa! My eyes! On the other hand, I'm into the t-shirt/blazer pairing, provided you go upstairs and remove all but one of those patches. I'll let you choose which one. 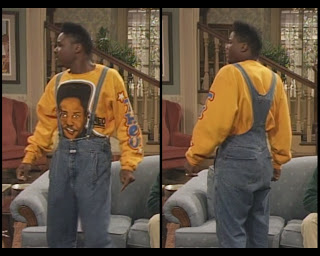 There's not enough space for all the "no" I want to write.

One more reason that Theo shouldn't be allowed to go to Egypt? THIS OUTFIT. First off, we learn the terrible truth, that the episode #5.24 garment is, in fact, a pair of the worst overalls of all time. Underneath, he's wearing a yellow sweatshirt with his own name and face on it. I don't advocate for violence ever, but this is the kind of thing that could push me over the line. 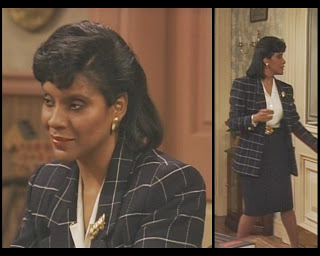 Do not ask this woman for money frivolously.

Clair mostly repeats her episode #4.20 outfit, but swaps out the blouse for one with subtler buttons and throws in some gold accents. Upgrade, well done. 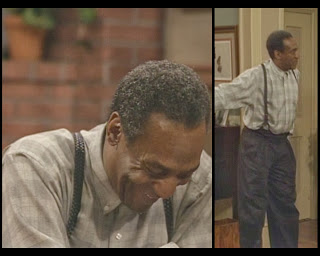 Cliff's braided suspenders offend me, but everything else is fine. Not great, but fine.

Wow, there are a lot of episodes in this show. But there's hopefully some greatness ahead, as we get Denise back for a while in season 6. Oh, how I love her. See you there, kids.
Posted by Unknown at 3:55 PM