Season 5, Episode 25: Day of the Locusts

Sondra is sick with strep throat and has to juggle her illness with caring for the twins while Elvin is at school. Seeing an opportunity, Clair and Francine swoop in and snatch the babies for a day of grandma fun. When Sondra wakes from her nap in a pharmaceutical-enhanced haze, she goes on a vengeful rampage through Brooklyn in search of her missing children. It's hilarious and weird and probably the only episode in the series thus far to make even decent use of Sabrina LeBeauf as a comedic force. 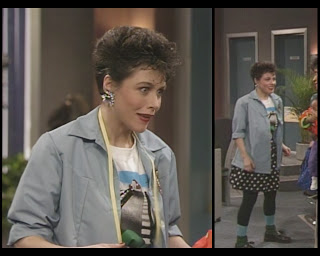 Point of continuity: when the ladies take the twins to the hairdresser, the same actors from Clair's birthday episode were brought back. This stylist's love of polka dots was even kept as a character trait, though she's gone for a simple skirt and print tee as opposed to the foofy blouse from last time. The emphasis here is clearly on her youthful, punky, street kid style, which I guess is a look. I'm having a bit of a hard time figuring out her leggings. She's got those atrocious bunchy green socks, then a few inches of teal, and then black... are the tights two-toned, or is there some manner of complex layering happening here? Whatever it is, I'm dubious about it. 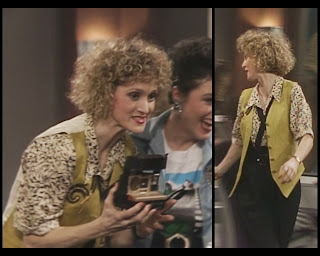 This is what Madonna was afraid she'd age into.

Karen, the woman who has a name but no apparent job, is giving us a fabulous boy/girl Diane Keaton presentation. The patterned shirt is a hair loud for my tastes, but it's not a terrible choice, really. Everything coheres because the color palette is tight, and the tailoring looks intentionally loose rather than just haphazard. I'm feeling this. 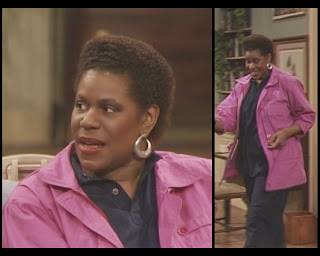 Why do we torment this poor woman?

The motivation behind Francine's styling choices is consistently baffling. What's with the need to put her head-to-toe in one shade? Like, maybe people thought it made you seem slim or young or something in the '80s, but it really just makes her look like a monolith. Then they throw this totally of-its-time coat on top of it, which is both bulky and horribly dated... I just don't know. I want her to look good, and I know it can happen, but the creators of this show did not know how to achieve it. 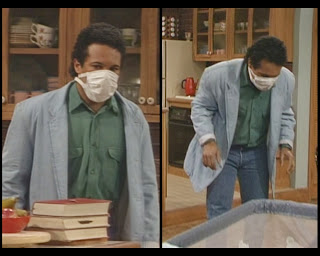 Not a doctor yet.

Elvin and Sondra wear masks because strep throat and bird flu are the same thing. Anyhow, these jeans are basically his uniform these days, and the green shirt is fine for him. I'm not really into the cuffed sleeves on the jacket, or really the pale jacket as a valid choice in any way. 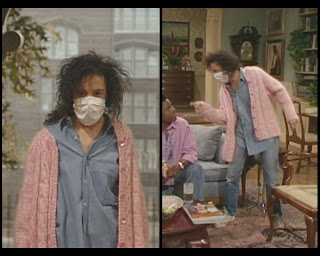 We're skipping Sondra's first look, which is just pajamas. This one isn't much better, but it's also not supposed to be: these are the items she chooses in a blind panic when bounding out of the house to search the city for her twins. It's totally right in that context: the first jeans and shirt she found lying on the floor, and a slumpy, comfy cardigan to warm her ailing body. Actually, a giant grandma sweater has its place elsewhere, so I'd be happy to see her pull this out again once she returns to sanity. 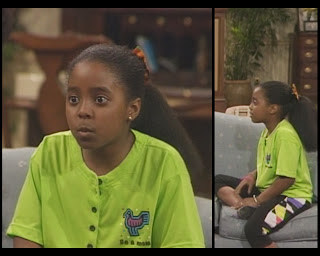 Those leggings! Rudy, you're too young to be in a Mix-a-Lot video. 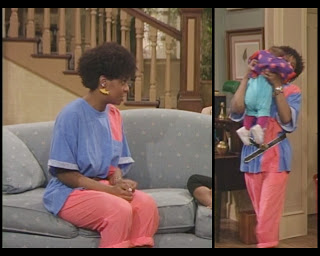 She should scrap everything except the zany fish earrings.

This combo is a reminder that the 1980s were all about matching outfits. Like, they probably sold these pants and this shirt together so you could wear them both at the same time, making sure to artfully roll the sleeves and pant legs in tandem so people know that these items go together. When did we stop seeing individual garments as individual garments? Let's all be thankful that we got that ability back. These hues are terrible, particularly against the stark black belt, which looks forcefully welded onto the ensemble. (It's the oft-seen Sondra-Season-2-opening-credits belt, by the by.) 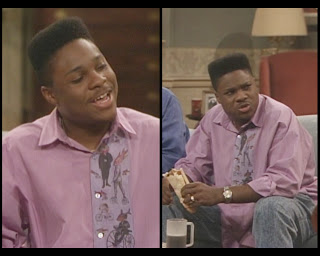 Snatching a minor triumph from the jaws of defeat.

Theo's failures during this show are many and varied, and they continue here: the jeans are gross and the shirt is an absolute tent. But let's give credit where credit is due for one of the best prints ever to appear in this blog. The absurdist old-timey-people-with-fish-heads graphics on that one panel are just phenomenal. If he took this shirt to tailor (a tailor with a lot of extra time), he could make it into the greatest garment he owns. I'm delighted. 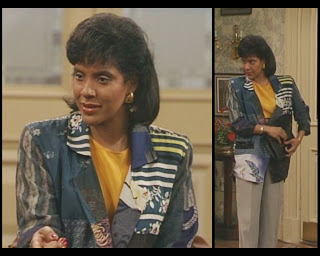 Working it even when it doesn't work.

Not content to let Cliff have his Cosby sweaters, Clair dives into the fray with what I can only describe as a Cosby blazer. The effect is more cohesive than it has any right to be, but it's still a little much overall. I think part of my prejudice is against the size of the garment; if it were fitted more reasonably to her body, then the amount of conflicting fabrics might be less objectionable. But in its current large, shoulder-padded state, it seems a bit too assertive for me. Also, pairing an almost-white and an almost-black at the very bottom panels makes it quite hard to match pants to this coat. If those flaps were both medium blue, then the khakis wouldn't look as misplaced as they do. Good work on the strong yellow underneath, though, which is just right. In the end, she's wearing this as well as she possibly can. 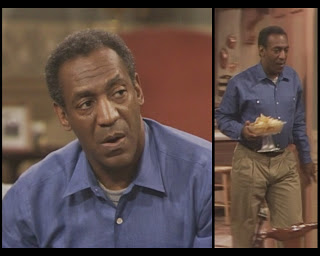 Last and honestly least is Cliff. Blue shirt, khaki pleated trousers. Hint of gray tee. You guys don't need me to say more about that, right?

Sorry that these entries have been coming in a little late recently. I'm still committed to serving as much hotness as possible, despite scheduling oddities. Thanks for sticking with me, folks!
Posted by Unknown at 1:06 PM