The youngest Huxtable siblings haven't been getting a great deal of focus lately. Turns out, with only two of them left in the house, they've been at each other's throats. After their bickering gets physical to the point that it actually damages the residence, Cliff banishes them to live in the basement. Somehow, the experience forces Vanessa and Rudy to get along with each other, though it's completely unclear to me what sort of lesson they were supposed to learn from this punishment. I have the same problem with our current criminal justice system, actually: prison is a deterrent, but certainly not a rehabilitation system. 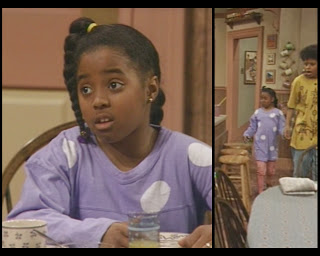 Rudy's opening look is pajamas, but I gotta say, pastels and polka dots are closer to right than she's gotten in the past few weeks. 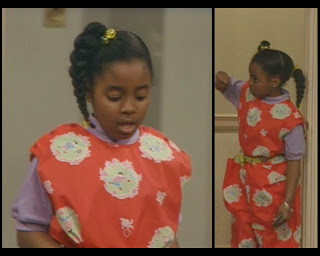 WHAT?! I have no idea. I guess this is Rudy's post-modern commentary on clothing: the ludicrous construction and knowing, almost parodist print depicting cartoonish humanoid forms is intended to comment on our Puritanical need to cover our bodies and the inherent absurdity of concepts like "fit" and "fashion." That shit is deep, especially for a child her age. 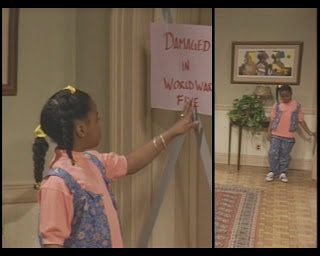 You know, I could honestly approve of this completely if that shirt fit her. I really could. 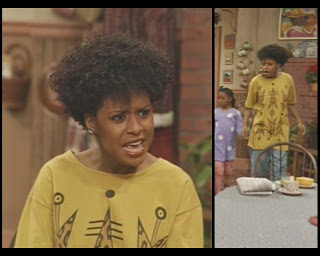 Vanessa also begins the episode in pajamas. Fun connection: she inherited this shirt from her brother, who wore it in episode #4.10. 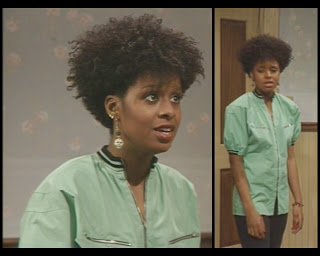 You know, I'm actually feeling this. The mint green is terrific on her, and the shirt is the perfect blend of '50s nostalgia and '80s bravado. The tailoring is, if not ideal, at least acceptable, and the zippers bring out a sassier side of the otherwise cutesy look. Oh, plus she's wearing tight black pants and skull earrings, which are pretty much always a good idea. 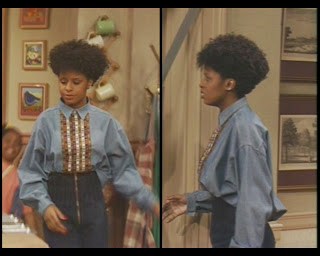 Yeah, that's a definite no.

Her episode #5.12 shirt is back, and boy does it still hang terribly. And beneath it, dear Jesus no. Like, wear some high-waisted jeans, sure, but please DO NOT employ an exposed zipper that runs from the base of your pelvis to the base of your rib cage. I can't be the only person who finds that visual utterly repugnant. 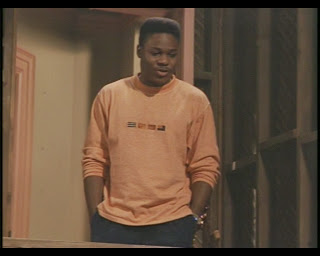 Maybe Malcolm-Jamal Warner should play Grace Jones in something...

Theo drops by briefly to gloat (the children are all jerks this season!) and wears a pale orange shirt with black pants. There are flags I guess, plus that loafy not-quite-mock-turtleneck collar he's so found of. It is, as usual, uninspiring. 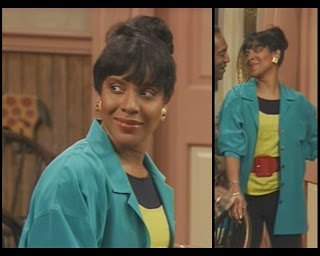 New hair! (Not one of last week's wigs, either.)

I'll give Clair credit for a pretty rad color combination here. The look is based on black leggings and a tight black top with a neon tank over it, which reads as pretty worky-outy, even with the red belt and teal shirt on top. There are too few steps between this and something you'd throw on for spin class, but the topmost pieces are kind of wonderful and could be used again either together or separately to do great things, I'll bet. 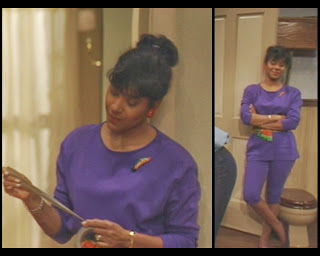 She even found matching flats. WHY?!

The capris? Perfect on her. But otherwise her look is a single-color snoozefest. (Technically she has a rainbow wrap belt, which I guess adds something, but it's ugly, so I can't really count it in her favor.) This image, however, still illustrates the value of posing like a boss, which elevates even the drabbest of duds. 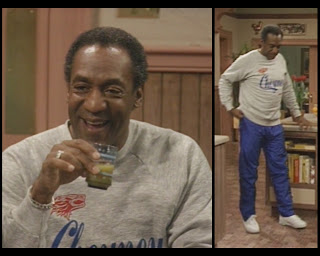 I don't know why Cliff's sweatshirt says Cheyney (as in the University in Pennsylvania). But we don't talk about sweats and jogging pants here. 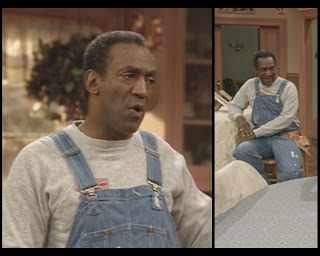 No smile, no juice cup.

He brings out his fixin' overalls to repair the ceiling. The Cheyney sweatshirt remains, lurking just beneath the surface. 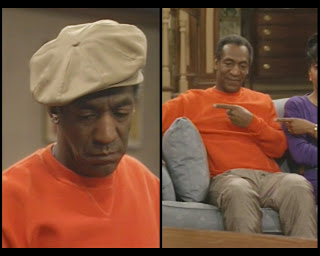 Here's the thing: I don't think those are track pants. On the other hand, they're so ridiculously shiny that I have a hard time believing they're twill slacks, either. Something's going on there. Maybe they were over-ironed, which sometimes gives cloth that satiny finish? It doesn't seem as though the costume department would send him out in opalescent khakis unless it were an intentional move, but I'll be damned if I can explain it. That orange sweatshirt is a great color, but we don't talk about sweats here, as I might have mentioned. He should stay away from hats. Or at least from choosing his own hats.

Those of you who have stuck with this blog are wonderful, and maybe crazy. I might be both of those things, too. See you around, kittens.
Posted by Unknown at 8:00 AM