In the continuing saga of deciphering Clair's age, we have a new (and further contradictory) data point. At the start of the series, she was roughly the same age as Cliff, which we learned when he revealed that he chose Hillman College after she decided to go there herself. Later on, Vanessa stated that there was a four-year gap between her parents' ages. Today we learn that Clair is turning 46. However, since Cliff turned 48 late in the first season, that means that he's going to be turning 52 in a matter of weeks, which adds another couple years to their age difference. The writers should have known from the beginning that they'd have to fudge the numbers a little. Phylicia Rashad was only 41 when she filmed this season, and still looked like she was in her early 30s. Passing her off as a 50-year-old working mother of five would have taken some dazzling make-up work. 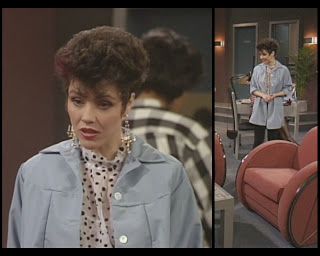 Joan Collins is her idol.

Since the birthday festivities involve a trip to the salon, we get a fair few guest appearances this week. Two-time Tony nominee Christine Andreas turns up briefly as an unnamed stylist, wearing the template outfit for an unnamed stylist in every '80s movie you've ever seen. The short haircut with a flash of color is basically the uniform for a fashion-forward young woman of this decade, while that blue smock is more literally the uniform in which she works. (I assume; if that's not a colorist's robe then she needs to rethink her morning's choices.) I'm loving the gauzy spotted top and slim pants in stark blacks and whites, and can get behind the earrings mostly because they are honest-to-goodness candelabras, and that's gutsy. 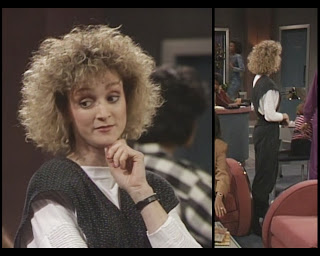 Carol Kane is her idol.

Pamela Blair plays Karen, another salon employee. You can tell that she's stylish because she's wearing something that sci-fi movies thought people of the future would wear. This one-piece is oddly flattering to her figure. She's exceptionally slim, so the baggier parts give her a little extra curve where you'd probably want it while accentuating her tiny waist and long legs. Though the colors are uninteresting in general, they're also textured, which adds at least a hint of visual dynamism. Overall, I'm enjoying this a great deal more than I expected to. 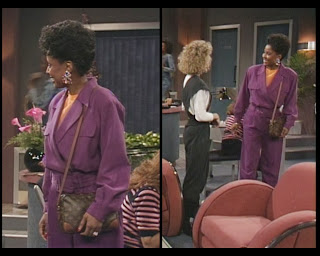 Prince's mechanic is her idol.

A great deal of emphasis is placed on looking good for one's age this week, which is preposterous given that neither Clair nor the actress playing her should have the slightest worry in that regard. Nonetheless, Barbara E. Smith (in her only IMDb credit) shows up for a quick second as Mrs. Clark, a woman who looks exceptionally good for her age and of whom others are highly jealous. Her purple microsuede safari gear does less to induce envy. And sure she's flossin' with that Louis Vuitton bag, but Clair is a lawyer, so she can get her own. 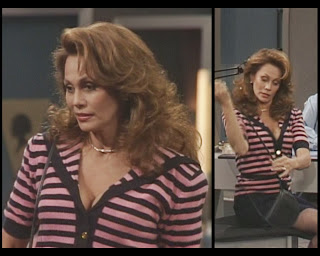 Charo is her idol.

Stage and screen actress Barbara Luna (who sometimes capitalizes the second B in her name apparently?) plays Cynthia, a more ostentatiously glamorous woman who is subtly shamed for clinging too tightly to her youth with a string of boy-toy husbands and implied surgical procedures. Her look accentuates this "problem" with the baby pink stripes, cleavage-revealing neckline, short skirt, and big bombshell hair. Personally, I'm not going to judge her for being fabulous. 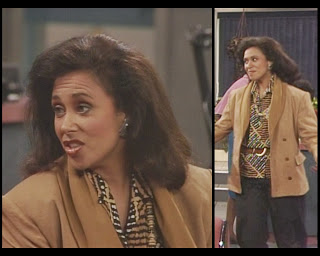 The mannequin at Chico's is her idol.

Clair's friend Lorraine (played by Denise Nicholas) makes her only appearance this week. I guess it's tough to see your friends more than once every eight years when you're busy with work and family. Her coat is a huge problem. The shoulder width, neckline, and general boxiness are all working their hardest to make her torso as stout as possible, while the poorly-placed buttons and overemphasized pockets make the piece feel dowdy. Underneath, she's at least trying for a little flair with the wildly-patterned shirt, but it's not a stupendous piece. Also, maybe don't force the brown/black pairing. I get that they're both in your shirt, but that doesn't mean you can wear that belt with those pants. 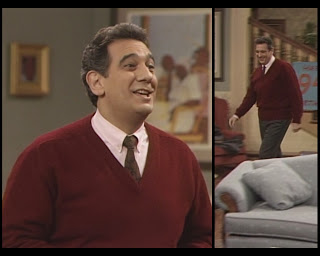 Mister Rogers is his idol.

Oh hey, speaking of stage legends, Placido Domingo dropped by! He plays Alberto, Lorraine's husband, but is really just shoehorned in so that he can serenade Clair with some opera tenor realness. His tie, shirt, and sweater are engaged in an active conflict at the moment, and I don't see it getting resolved any time soon. The pants are staying out of it. Smart move, pants. (Deep down, I think the pants see where the sweater and shirt are coming from. Like, what is your deal, tie? Why do you always have to start shit? If you don't like it here, maybe you should move out!) 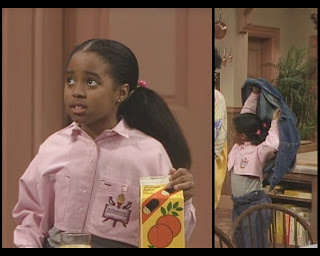 You're too young to get stuck in a rut, Rudy.

Rudy starts us off with a repeat of her episode #5.10 display. It's no less weird now than it was then. 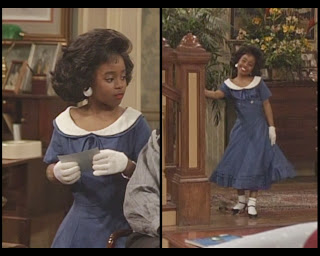 I've said it before and I'll say it again: this family might spend too much money on costumes. For their mother's birthday, the children each give a presentation on what the world was like when Clair was their age, including an outfit to reflect the time period. With a wig, even! And that's a nice wig! And Clair doesn't usually wear wigs, so it's not like they just had that lying around. It's a pretty adorable dress, but I'm sure this is the last time it will see the light of day. 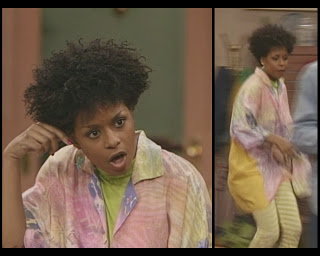 This look is its own punchline.

This pastel smock last showed up in episode #4.21, and age has not helped it. Close-ups don't help it, either; are those zebra stripes I spy under the splotches of color? The chartreuse t-shirt isn't wrong in this setting, but those striped leggings are wrong in every setting. Get them out of here. 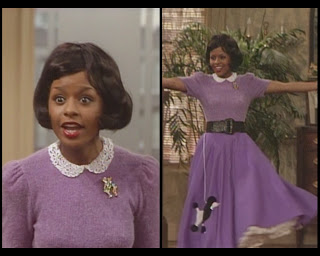 Surely Clair wasn't allowed to wear make-up at this age.

Another costume, complete with another wig? The spending! Also, poodle skirts are far too obvious. People wore other stuff in the '50s, I'm sure. 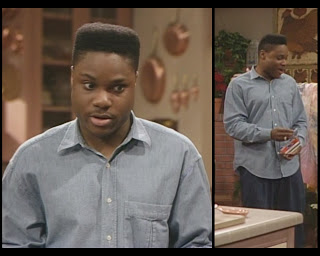 No but really, he stopped trying years ago.

Theo's shirt is too wide yet too short. Adventures in bad tailoring! The pants have appeared repeatedly and have been misshapen every time as well. 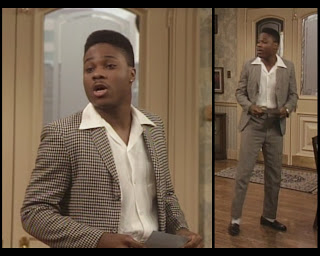 He is capable of greatness.

See, this is how it's done. Don't be afraid of clothes that fit! They make you look better! Other than the extreme collar, this is pretty impeccable. 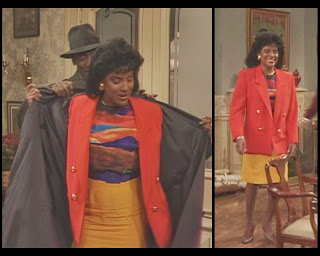 Didn't we almost have it all?

Though Clair usually has perfect style, she goes a little overboard with the saturated hues for her birthday. Since everything has the typical '80s breadth, the use of extreme shades like that neon coral becomes particularly flagrant. The top with the sunset is kind of great, and I'm dying over the perfectly matched purple belt with the golden skirt (though I want so badly for that skirt to be fitted). But I'm honestly stumped as to what I'd do about a jacket to put over this. All I know for sure is that it would be a much smaller piece, because this is too much. 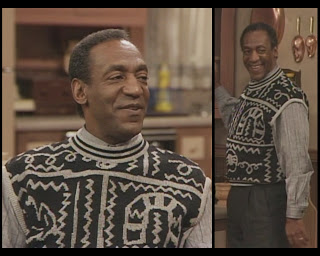 Ring around the collar.

As an offset to his wife's selections, Cliff goes all gray this week. I'd be OK with just the shirt and pants, but let's be real: that is the ugliest sweater vest out there, from the pouchy fit to the random symbols to the thick, ruglike texture. Nope.

And that concludes another week. Hope you enjoyed!
Posted by Unknown at 2:24 PM