Things are going well with Justine until Theo helps a stranger from the theater department rehearse a scene. He gets caught taking a little dramatic license and kisses her, and Justine dumps him on the spot. Despite writing poetry, begging, and singing the blues, she cannot be convinced to take him back. 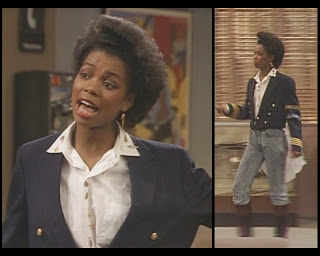 You remind me of the babe.

This is Vanessa A. Williams (not to be confused with singer/actor Vanessa L. Williams) as Jade, the woman Theo kisses. She's apparently fresh from an audition for Jareth the Goblin King. I guess they were trying to give her a highly theatrical costume to show what a free spirit she is, but mostly she just looks like she half-assed her pirate costume for this afternoon's LARP-ing session. The jeans and boots could maybe work if the top half was completely overhauled, but the blouse with the flowing back and dangly fasteners has no hope. I'm intrigued by the cropped military jacket: the construction suggests to me that it's a full-length coat that she modified herself, and I admire that kind of pluck. 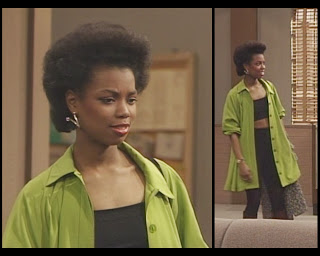 You need to direct that skepticism inward, girl.

She makes a brief reappearance after the breakup, wearing a pretty unremarkable configuration of clothing. Without that green coat, I'd assume these were gym clothes, but I think she's seriously wearing this as just everyday gear. The wild green is fun, but otherwise I find this to be pretty haphazard and unappealing. 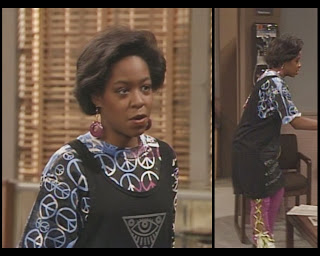 She's a joke person, it seems.

Justine's roommate Delores (played by Tichina Arnold) shows up in this episode. My best guess based on her getup: she's majoring in Psychedelic Illuminati Clowning. Seriously, what even is all this?! 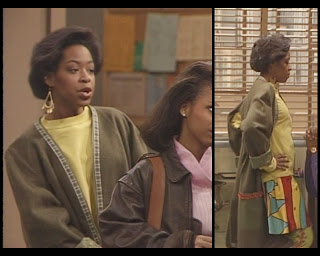 She delivers a whole lot of "not having it."

Her second appearance cements her as a good roommate, a loyal friend, and an atrocious dresser. If you're going to clash a color, please don't clash yellow. It's one of the worst affronts to the eye you can commit. 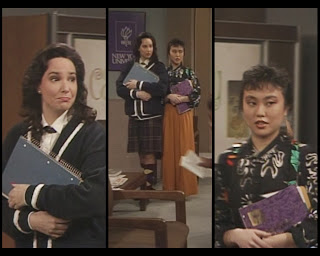 They're the school's equivalent of the grumpy old Muppets sitting in the balcony.

Leila Kenzle (who eventually got her big break) and Una Kim (who did not) arrive in the background of a couple key scenes basically to show us that this breakup is messy and public, even if only two other people live in this whole dorm. I assume that Miss Kenzle went to a school that required uniforms and thus never learned how to dress herself. Stick to what you know? Miss Kim has committed a major misstep with that junky shirt, but I'm positively living for those wide, flowing pants. That had better not be a skirt, by the way. My whole day is riding on the assumption that those are pants. 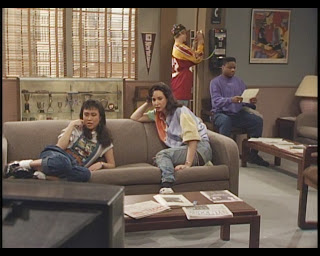 Anything on besides The Cosby Show reruns?

Don't dress like these girls. Do not do it. 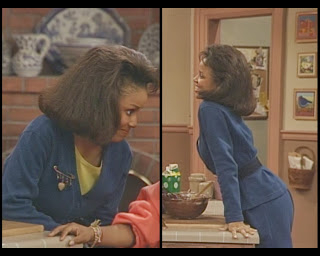 You know what Justine loves? Matching her pants to her top. She has a solid handle on fit, most of the time: as a petite woman, she's smart to stay away from anything too voluminous, as the width can quickly make her boxy. Her use of high belts to lengthen her legs is also smart. But this monochrome thing is a problem, even if she punches it up with the shock of chartreuse or the spangled pin. Just pick items that are two different colors. I know you can do it! 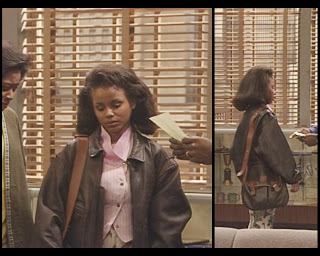 And now the fit is wrong. It's either/or with you, huh?

I'm disappointed that we don't get much of a look at whatever is under her insanely large leather jacket (remember what I said about wide things ruining her proportions?) because this complex, structured , pin-striped pink top looks like it might be fabulous. The patterned pants she chose don't seem to be a great pairing with the upper half, so this might not be a cohesive look, but really there's not a lot to go on: she shows up only briefly and is mostly obscured by the coat and bag. Oh, costume department, how you tease me! 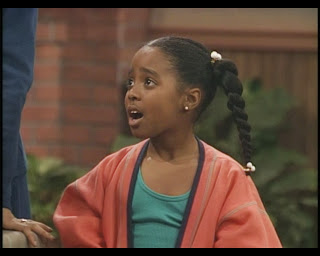 "You're skipping me again?!"

I'll be honest: I think Rudy's still too young to include in this blog, but she's a cultural touchstone so I feel bad overlooking her. Still, most people don't say something with their clothes until their teen years, and there's rarely anything to observe about her. So, like, here she is. 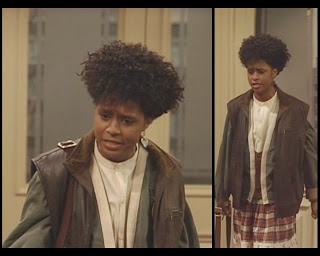 Vanessa brings back her episode #5.14 skirt and a simple white top, with maybe a low-fastened cardigan or something going on under there? Tough to say, as she has armored herself in a thick jacket topped with a thicker leather vest. This is the kind of padding you wear if you're planning on being bombarded with paint balls or rubber bullets or something. What route does she take home from school? 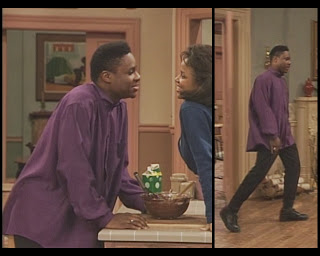 Admit it: someone wore this in your high school's production of Romeo and Juliet.

Oh, Theo. Your shirt is several sizes too big. (You should have kept it hidden under a cardigan like you did in episode #5.15.) Your collar is half-popped. Your top button is buttoned. The whole look is too dark. You have failed. 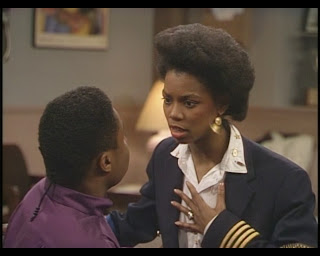 Also, that rat tail is getting exceptionally long and gross. 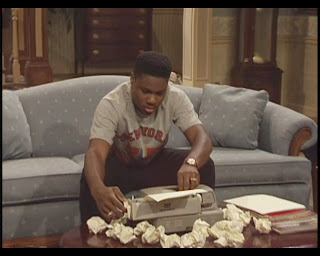 Put on your thinking sweatpants.

This is his poetry-writing outfit. 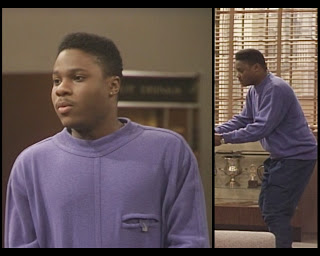 The bottom of this barrel is getting awfully thin, Theo.

This is not the outfit you wear to win someone back. I really can't get into it. It hurts me. 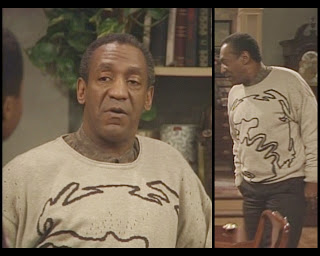 But what does it mean?

Since Clair does not appear this week, we'll jump straight to Cliff, who has some sort of abstract line drawing on his sweater. It's actually kind of beautiful, and the understated earth tones are fabulous. This would be a perfect outfit were it not for the swirly, mottled, barfy collar popping up at his neck. Everything about its color and print are terrible and it disappoints me that such an otherwise glorious moment was marred in this way. Boo.

Apologies again for having skipped a week, kids (and for being so late posting today). I could go into details, but I won't. We're here to talk Cosby, not to explore the highs and lows of my life. Anyhow, further delays should be avoidable, so expect a timely entry next week.
Posted by Unknown at 8:00 AM