Elvin loves going to medical school all day. Sondra hates staying home with the babies all day. Pop quiz: who's earning money around here? Neither of them? How is this... whatever, doesn't even matter. The point is that Sondra is tired. At dinner, the elders in their family give both young parents advice. 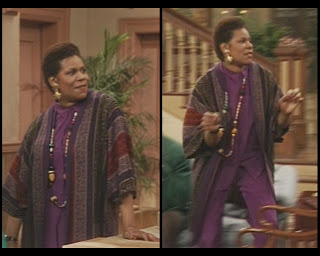 Elvin's mother Francine is back in another broad look that I still believe is intended to weigh her down and age her. She doesn't look like a grandmother by any stretch (not that Clair does), and so the billowy top layer and matched purple pieces are used to obscure her actual body and give her more generous, matronly proportions. At the same time, the rich colors and textures ensure that she seems somewhat stylish rather than just frumpy. The long, beaded necklace is a particularly nice touch. This isn't a fantastic shade of purple for her or for that coat, but we'll live. 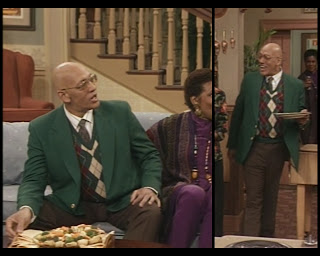 Lester returns, but his beard does not. He's the jovial one of the group, and his personality is accentuated by the almost clownish combination of loud coat and argyle sweater. While I like him in green, this particular one doesn't really land with me. Overall, his look seems more about broadcasting a personality trait than actually making him appear to be a reasonable individual. 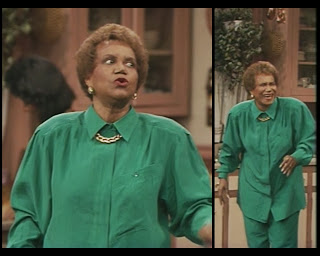 Anna is a shoulder pad abuser. She needs help. Someone should have staged an intervention long ago. Above is a prime example of the heights to which she has taken this unfortunate addiction. She is a pair of purple shorts away from going out as The Hulk for Halloween. 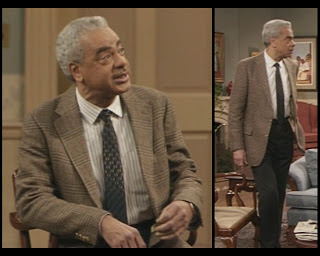 The opposite of mood swings.

Never one to buy new when he could wear old, Russell brings back his episode #2.23 jacket, paired smartly with a striped shirt and primly patterned tie in dark neutral colors. As ever, he gives the impression of a man who has his gig together. 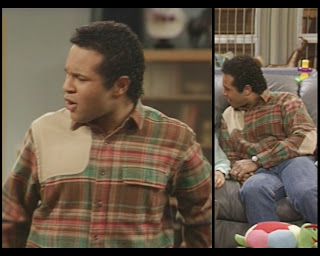 Though Elvin gets two outfits, we'll only look at one, because the first is a repeat of his episode #4.8 shirt with an old pair of jeans. 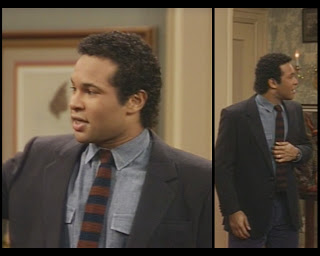 Tried to caption it; fell asleep.

To dress it up for dinner, he chooses the plainest, bluest clothing he can find. Seriously, did he not have a solid navy tie? Why not just double down and go all the way if you're going to be this dull? 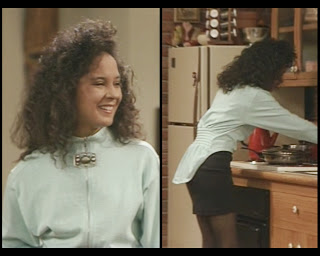 This look is a straight repeat from episode #5.13. Last time, however, Sondra wore thick leggings beneath that short skirt. This time? Sheer hose. The only way she can feel like a young, vital woman is by tarting it up a little. Honey, I know the feeling. 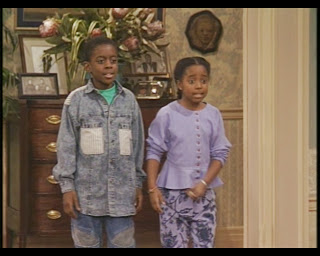 Here we see Kenny and Rudy, dressed as a lumberjack's ass and your grandmother's throw pillow, respectively. 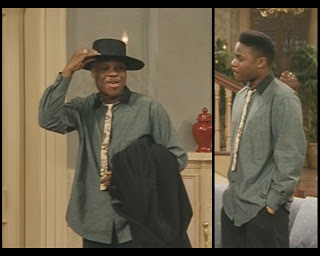 I'm grading him on a curve at this point.

The college man has a date with Justine, meaning she hasn't quite come to her senses yet. Now's the time to make mistakes, I suppose. I can't fault the intention behind these clothes, but each piece is the wrong size. He needs to slim those pants, slim the shirt (and tuck it in, for crying out loud), and lengthen the tie. The hat is obviously idiotic, but there's a line about him looking like Zorro, so I have to assume that it was inserted only to justify the joke. Theo's not generally a hat man. 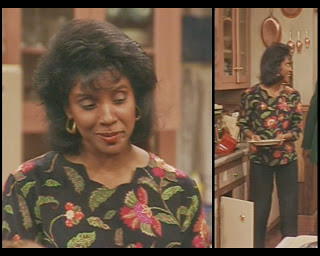 When she falls short, I just spend less time on her.

Oh, I get it: Rudy dressed like your grandma's throw pillow because Clair is serving Grandma's Armchair Realness. I'll give her that collar shape, though. There's something redeeming in every one of her outfits. 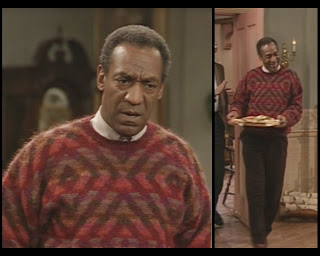 Hoarder. His closet must be ridiculous.

Cliff already owns several sweaters in this autumnal color scheme; he really has no need for another. The pairing of subtle horizontal bands with darker concentric diamonds is hypnotic, but in a good way. I think the patterns play interestingly off each other to become more than the sum of their parts without threatening to hinder your grip on reality. And that's always nice.

Before we wrap things up, I want to do a little publicizing. If you're a fan of RuPaul's Drag Race, then you should check out Reddit's Lip Sync For Your Life competition. This week, the final three are battling it out for the overall win, and you can help decide the outcome. (You needn't be a Reddit member to participate; votes can be submitted via Facebook and Twitter as well.) So go watch the videos and pick your favorite.

Thank you for indulging me in that. See you next week.
Posted by Unknown at 6:13 PM