Season 5, Episode 19: The Boys of Winter

Apologies in advance, fair readers: this one is so short that the cast might as well have been naked. (Actually, I feel like an all-nude episode would spur a fair amount of discussion. No, never mind. I'd just post "WHY?" and move on.) The entire plot is that the family watches a video of Cliff and some of his older male colleagues playing basketball against a team made up of young women. The ladies win, and it's, like, a huge deal. Like, OMG, a girl beat a boy? At a sport?! Cliff's old basketball coach happens to be around to witness this, but it's still boring, because literally half the story is just everyone sitting in the living room watching TV. I don't need to see that, I'm already doing that, only instead of a loving family, I'm surrounded by a burrito, my Twitter account, and crippling loneliness. 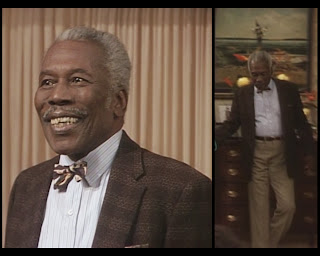 His smile is too earnest. It's unnerving. Tone it down.

This is Tiger Haynes as Coach Barry. Other than the messily patterned and somewhat flaccid bow tie, he's got himself a good getup here. Since going with a pale blue shirt would have been too easy, he chose this thinly striped number that suggests the standard we're used to but is, upon closer inspection, slightly more complicated and interesting. The jacket is similarly subtle in its details, making this an outfit that rewards people who are willing to give it a closer look. He's wearing the khaki slacks a little high, but he was right to go with a subdued pant. 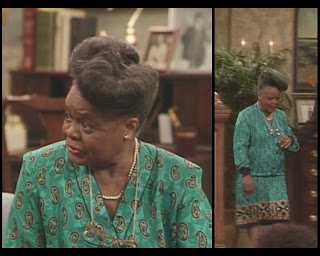 Birdie M. Hale plays Mrs. Barry, who has apparently spent weeks preparing her hair for this gathering. That is an impressive configuration. Crown it. Her blouse and skirt are right in terms of color, but wrong in terms of print. The use of a highly contrasting paisley over a mottled background is, for my tastes, too much, especially when added to the black bands at the wrists and the complex creation at her hemline. Even if you're not interested in being subdued, there's no need to wear everything at once. A bright color and one pattern is plenty. Also, seriously 1980s: stop with the matched sets. What year did we discover coordinated pieces? 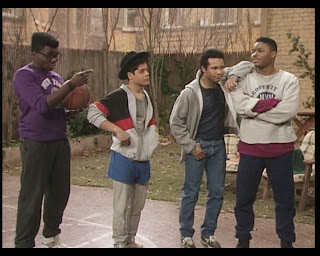 Shorts over the pants because NO HOMO.

There are four boys playing basketball in the back yard (because the Huxtables live in that weird, unattainable Brooklyn where people have big back yards), but I'm not getting into what they're wearing because ew, sweats. I guess technically Elvin is wearing jeans, but how many times have we seen those jeans? A million? Don't make me explain jeans and a t-shirt to you, you get it. Also: Lou still has that damn hat on. 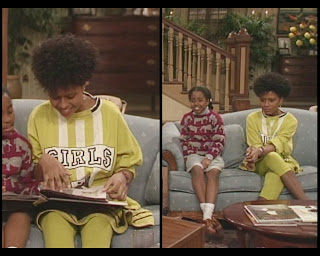 Lena Dunham is their mascot. Or maybe their opponent.

We'll get both sisters out of the way at the same time here. Rudy's revisiting her episode #5.15 sweater, with a skirt instead of pants. Vanessa has opted for an all-chartreuse (we love matching!) outfit that overtly connects with the episode's plot. We've seen long shirts over leggings many times, but this creation is reminiscent of a team uniform. She's on Team Girls, get it? Because the girls beat the boys at basketball? Good color choice, but not much else. 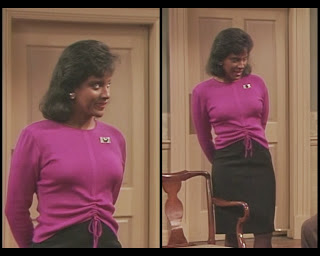 Such a flirt! That face.

We can usually count on Clair to bring the taste and elegance, and she largely delivers here, though I have concerns. Certainly her black skirt remains impeccable, and the fuchsia of her top is on point. The small pin is odd and delightful. But what's going on with the intentional bunching in the middle? I'm all for a ruched garment, but you need to do that with a thinner fabric. This is a little too haphazard in its bunching. Also, you generally don't want to just add four or five thick bumps right across your midsection. It's not hugely flattering. She can pull it off because of how slim she is, but it still has a strange effect. This would be more boring if she gave up that flourish, but probably better. 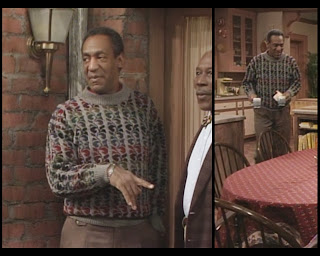 I think I'm tapped out on sweater captions.

Cliff closes us out with a great sweater (other than the mock turtleneck part). I like when he does the "variations on a theme" thing, offering the same print in different colors to add variance to the structure. It's catchy without going too wild. This one in particular feels clean and crisp in its execution because of how it adheres to the darker hues in the leaf design, letting them all stand out equally against the gray backdrop. The pants are maybe a hair light, but I'll allow them.

And that's it. Really. End of episode. Until next week!
Posted by Unknown at 8:00 AM