When Theo catches Justine hanging out with another man, he gets petulantly jealous. (She rightly points out to him that they are seeing each other non-exclusively and that acting like a child isn't a fantastic way to earn her attention.) His friends convince him to get rid of the other guy by visiting Dr. Lotus, a purveyor of supernatural remedies. Of course, chicken bone curses aren't cheap, and Theo has to ask his father for hundreds of dollars to help him run the other man out of town. Thank goodness Cliff isn't as dumb as his son. 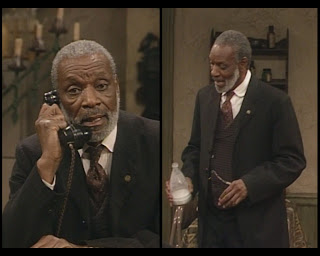 Hello! Can I interest you in some pseudo-science?

I'm glad that Moses Gunn, as Dr. Lotus, doesn't have some sort of wacky hoodoo witch doctor getup. The three-piece suit is crisp and classy, especially with the added bonus of a vest in chocolate brown accompanied by a chain that I assume connects to a pocket watch. (He doesn't seem like the type to get all Hot Topic and just throw a bunch of chains around for no reason.) Pairing browns and blacks is advanced work, but this man is prepared to take things to the next level. Also note that the collar has a soft, rounded edge rather than pointed peaks. He's all about pushing boundaries. 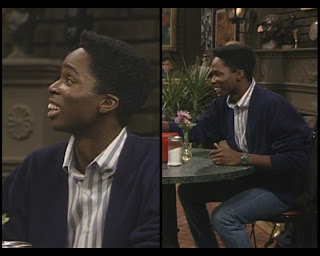 Scott, the man who has caught Justine's eye, is played by Harold Perrineau. He is the second actor from Lost to appear this season (after L. Scott Caldwell turned up in episode #5.5). There's a crossover fanfic just begging to get written there. His look is pretty plain and clean-cut. I'm sure the aim was to make him seem solid but bland, the sort of perfect everyman onto whom people could project a personality. He's nice without having obvious flaws or obvious strengths, cute without being strikingly handsome or hot, and decently dressed without seeming outright shabby or incredibly rich. There's nothing there, so there could be anything there. 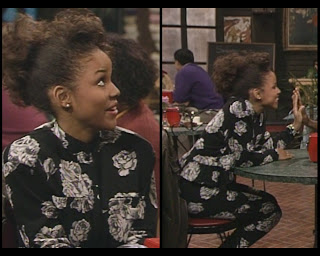 Let's go to a karaoke bar and all sing "Kiss From A Rose" together.

Oh, Justine, what are you doing? The '80s (or at least The Cosby Show's rendition of the '80s) seemed to be all about matching. People looooooved to match their clothes. A black base with large white roses is a pretty aggressive print. Using it to cover one's entire body with two separate garments is absolutely the wrong way to go. This is especially true given that she has nothing in the way of accessories, like a belt or a vest, to break it up in any way. The print is all this outfit has going for it, and that's just not enough. 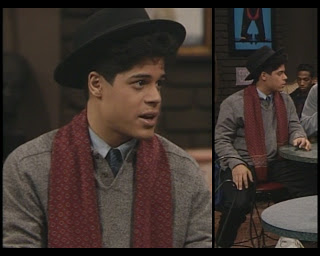 Or maybe "You Can Leave Your Hat On."

Lou returns, still with the hat (which he specifies does not leave his head ever). He's really prepped it up since last we saw him. The palette is somber, the pieces are business casual... he's even wearing a tie! If it weren't for that lid, he could be an administrator. 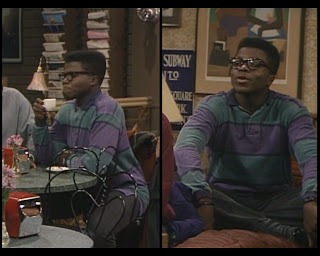 Howard repeats the outfit we first met him in from episode #5.6. 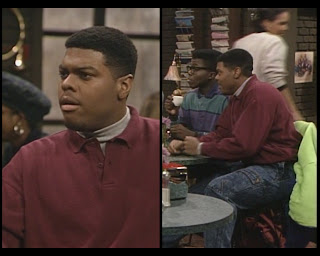 Some acid wash cargo jeans for Denny. Oh my. The top half is less overtly offensive, though the maroon collared shirt is far too roomy and the mock turtleneck layer beneath it is a mock turtleneck. (We've seen a lot of that lately. Let's hope that trend dries up by the end of the season.) 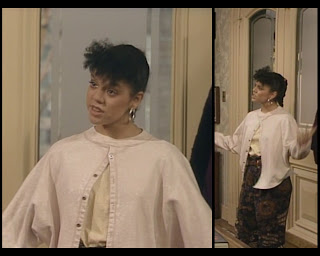 She bang, she bang.

To make up for Vanessa's absence in this episode, Kara drops by. The pants are basically the whole outfit, not only by loudness but also by sheer volume. That's just a whole lot of pant. Her top half shows that even whites can clash if you try hard enough, so on some level good for her for setting a negative example. I'm also pretty sure that though her outer layer has buttons, the neck itself does not unfasten and must be pulled over the head. So the capey presentation is not a choice on her part, but rather a function of the top itself. As usual, I'm distressed by pretty much everything about her getup. 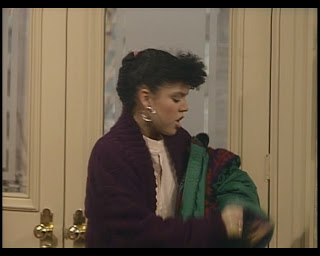 Also distressing: thievery. This is the episode #2.14 sweater that Vanessa borrowed from Denise without permission, and then apparently inherited outright when Denise left for school. Now Kara is using it as one of her layers as she prepares to brave the cold. Is this another instance of "borrowing," or does she have clearance for this use? 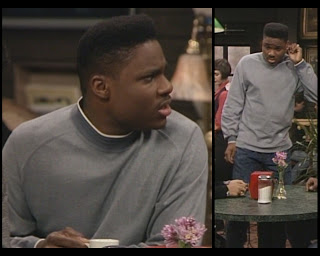 Theo is the only Huxtable child to make an appearance this week, and he does so in the blandest possible clothing. Big gray mock turtleneck sweatshirt (and you know how I feel about overlarge garments and mock turtlenecks), plain jeans. Snooze. 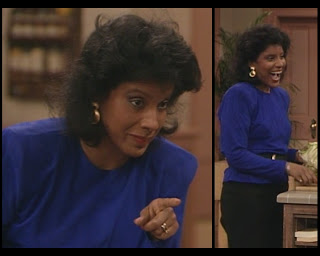 I don't think Clair has worn this specific top before, but it nonetheless telegraphs as something she used to wear. The high, collarless neckline dresses it down, the shoulder pads are perky to the point of militarism, and the color is very first season, especially when paired with a black belt and pants. Maybe this is here to remind us how much better things have gotten. She sets the bar low every once in a while as a contrast, helping us to appreciate her typical fabulousness all the more. 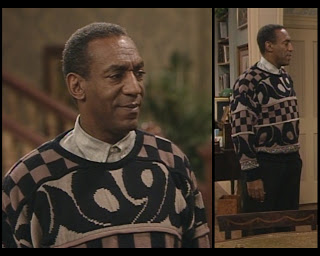 Cliff really understands how to work a weird pattern. If you're going to pair a curvy print with a blocky print, then don't also get ridiculous with neon shades and power clashing. You needn't use all your tricks at the same time. By going with neutral tones, he lets the different shapes stand out and make an impact. It's still sort of an ugly sweater, but it's the kind of thing we've come to expect from him by now.

And that's it! Lots of guest stars, but the whole incident takes place over a few hours, so no clothing changes. See you next week.
Posted by Unknown at 8:00 AM