One of Cliff's patients is a young single mother, and the only relative who responds when he calls to notify them of the impending birth is her grandfather who she has not seen for many years. (So many, in fact, that she has to be told who he is when he arrives.) Cliff later figures out that the grandfather cannot read. (Actually, Clair figures it out because she claims that a former coworker couldn't read, which causes me to question the hiring and performance monitoring practices at her law firm.) Anyway, that's pretty much the whole plot: old man can't read. 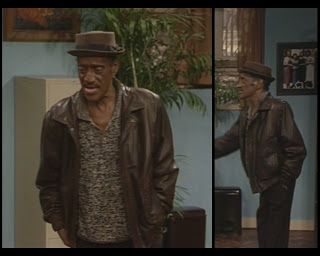 This show nabbed some prime guest stars in its day.

It's more exciting, of course, when the old man is Sammy Davis, Jr. He's such a tiny man, but he comes from an era when clothes are cut smaller, and that shows in how they dress him for the most part. The jacket and shirt here are both a little bulky, but the pants are surprisingly slim. Also, he may well have needed that hat custom made; I bet a regular one would be huge on him. I'm not loving the use of multiple browns over a black-based outfit, though, and the shirt is a little scruffy. 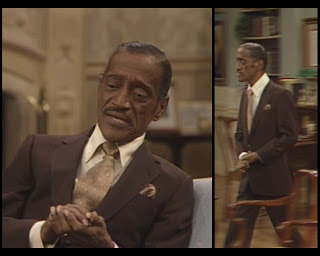 Now that's what I'm talking about.

He cleans it up for his return to the Huxtable household, though. This is how you do it, folks. I love that the suit has a definite '70s feel to it with the brown and golden tan pairing, the creamy color of the shirt, and the size of the collar, tie, and lapels. Nonetheless, it's a cohesive palette, and the tailoring is impeccable. Again, he's a little guy, he can't buy stuff off the rack. There's good character information in the fact that these are older pieces. He peaked over a decade ago when this was the height of fashion, and though he hasn't been in a situation to update his look since then, he's still wearing his absolute best to come see the doctor. 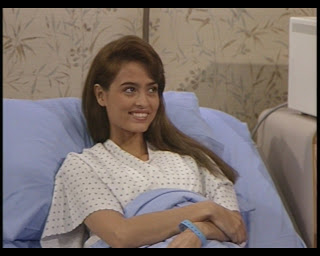 At least she got to lie down all day at work.

His granddaughter appears only once, and she's wearing a hospital gown. The actress is Leticia Herrera. 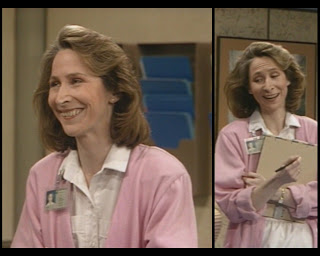 Even her genuine smile is a little salty.

Her nurse is the pink-loving nurse that threw all that bitchface at Elvin in episode #5.7. 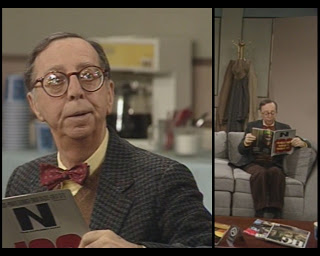 There's also this dude, who the proud grandfather meets in the waiting room. Turns out he's an English professor! The script suggests that he can thus teach Sammy Davis, Jr. to read, but that doesn't seem right to me. If he's used to working at the collegiate level, then he has probably never had to give someone tutoring that basicl. They should have made him a grade school teacher. Anyway, he has an intentionally silly look going with the big glasses and the tiny bow tie and the bright colors. It matches his kooky voice. (Arnold Stang, the actor, is known for his work in cartoons.) 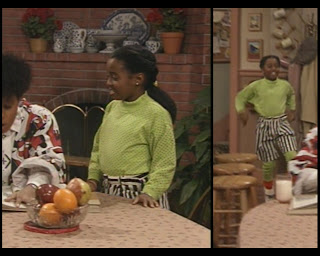 I need more words for "no."

Oh Rudy. No. Absolutely not. Like, where to even begin? Tiny dots and huge stripes: no. Matching shirt and leggings: no. Long-sleeved shirt tucked into shorts: no. Shorts over leggings: no. Contrasting socks over leggings: no. Built-in belt: no. There are at least five other "no" options here. Like, it's all a "no." 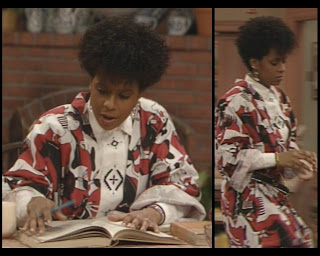 Wild horses couldn't drag her away.

Vanessa is wearing the shirt Amy wore to Theo's illegal party last week. This context is actually pretty similar to how it was just worn: this robe/coat/blouse thing isn't quite as busy, but it's still oddly patterned, poorly fitted, and tough to define with a specific name or purpose. At least she stayed vaguely cohesive with the palette (the pants are barely shown but also black). And the wardrobe people gave us a real throwback with that belt, which first appeared on Sondra in the season 2 opening credits sequence. 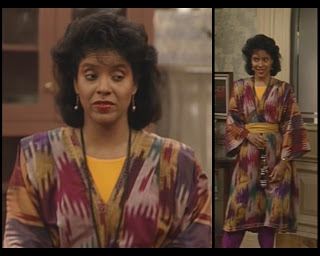 Since Theo does not appear this week, we'll jump straight to Clair. When she first showed up behind the counter, the width of this garment made me assume that it was a fancy bathrobe. But it seemed to be an odd time of day for her to still be in last night's clothes, and sure enough, when the doorbell rang, she answered it without an once of shame. Then Sammy Davis, Jr. complimented her on her outfit repeatedly, saying that it would have fit right in with the attire of Josephine Baker and her compatriots in Paris. Honestly, it looks as though the effort was made to give her something particularly forward-thinking to wear in direct response to that scripted comment, but I'm not sure this is what I would have chosen. For one thing, it's very different from her usual style, which makes on wonder why she's wearing it at all. And secondly, I debate whether it actually looks like something to be worn in a bohemian Parisian night club, though I guess I'm not an excellent judge of that.

Overall, I think this outfit does precious little for the woman wearing it. There are too many shades, not all of which assist each other, and it doesn't feel flattering or coherent. On the other hand, the Josephine Baker reference gives me an excuse to refer to this video. (In case the link doesn't do it automatically, skip to 3:55 for the relevant section.) 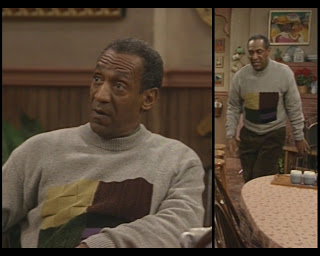 Cliff is quite structured in his sweater-made-of-sweaters presentation this week, choosing to deliver the various colors and textures in four uniform squares against a flat gray, almost as though they were art pieces hanging on a gallery wall. It's a compelling approach, and I love the meta quality of his body showcasing clothes that in turn showcase other clothes. 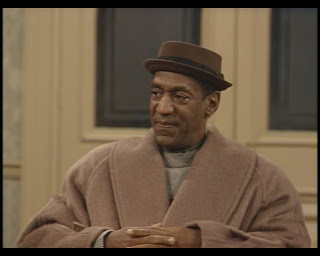 The episode ends with the proud grandpa giving Cliff his hat, which I guess was regular-sized after all.

After last week's marathon, a light episode like this is a dream come true. Especially on a long weekend. Enjoy your Labor Day, kids.
Posted by Unknown at 8:00 AM