When Cliff, Clair, Vanessa, and Rudy all leave the house for the weekend, Theo is left home alone. He throws a party, and then something that only ever happens on TV occurs: his few guests all invite people, who all invite people, and suddenly he has a rager on his hands. Am I the only one who doesn't have this problem? Never in my life has one of my gatherings exceeded expectations in this manner. I'd like to think it's because my friends are polite enough not to haul truckloads of randos to my apartment, and not that I'm simply lame.

Also, this episode provides the first irrefutable proof that the IMDb has, in fact, been incorrect about the episode order this whole time. Though the Huxtables bought a new couch last week, the old couch is seen throughout the party. It's replaced in the next episode. 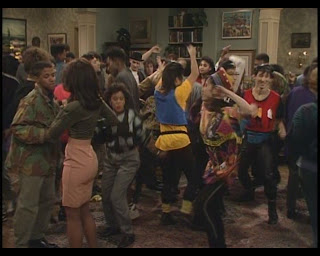 Don't let these idiots into your house.

A lot of people show up to this party, and a lot of people change clothes multiple times this week, so get ready for a lot of images. I'm going to keep my comments brief because you probably have other stuff to do today. 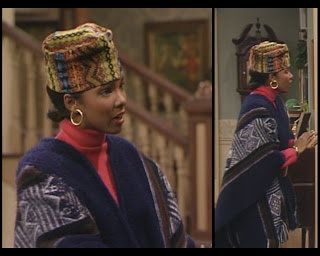 More culture than a bucket of yogurt.

This woman shows up to the party because Theo is supposed to hit on her while her boyfriend is out of town. Her boyfriend is not, in fact, out of town. I'm all about her Afrocentric vibe and her use of a diverse palette to express herself, but I worry that her heavy layers are going to be uncomfortable as the night wears on. She's supposed to be dancing in a crowded room; this is impractical. 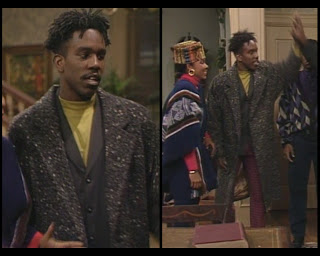 This is her boyfriend. Ignoring the mustache and the Miami Vice quality of the blazer-over-tee look, he's got a decent color story happening here with the charcoal jacket, chartreuse top, and wine-hued patterned pants. I'll gave him passing marks for this one. 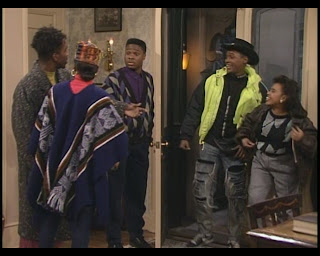 This is actually her Grey's Anatomy backstory.

The woman on the far right is Chandra Wilson. The man standing next to her should not have left the house looking like that. 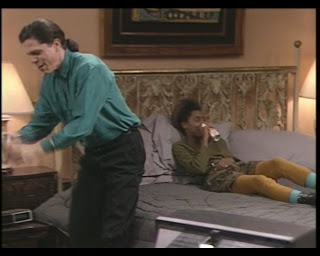 Get out of Clair's bed. You haven't earned it.

The dude standing up looks like an idiot, but his friend lying down has a good thing going. (More could be said about all of the partygoers, but really, who has the time?) 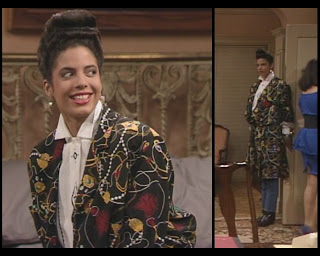 Nothing about her says "stable" to me.

This is Amy, who shows up to the party and gives Theo some serious eyeing. He's pretty into her, which is confusing because her look is an absolute mess. The foundation of skinny jeans and a white top could have survived my wrath, even with that high collar and unnecessary black detailing. But the gargantuan black coat with the splattery print? I'd say it looks like a bathrobe, but even as a bathrobe I wouldn't touch it. It's ugly enough that I literally wouldn't want it worn even in private. It should not exist.

Also, can we get a better look at that hair configuration? 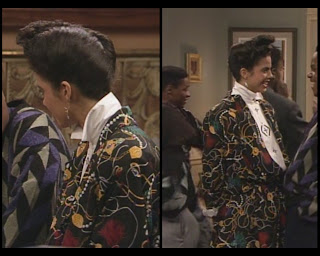 How long did it take her to do that? She must be going to school for an architecture degree. 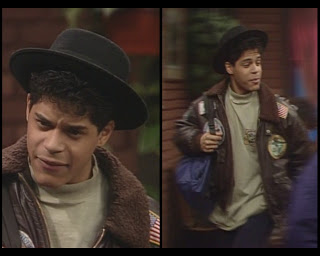 He's more stereotypically Latino than a local production of West Side Story.

This is Lou, in his first of several appearances on the series. He apparently really likes that hat, because he wears it again later even though it makes him look ridiculous. Like, the rest of his outfit is pretty standard, but what's with the lid, son? 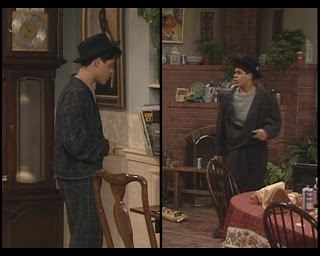 Case in point: so much dancing.

He shows up to the party in something that is at once a suit and a sweatsuit. He may have invented this hybrid formal/casual getup himself to allow for the freedom of motion he would need to dance like a maniac, which he does all night. 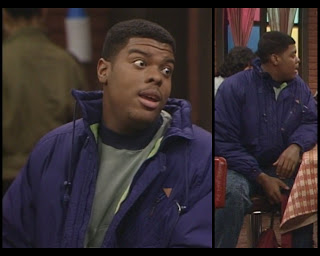 Denny is the one who first suggested a party. Great idea, Denny! 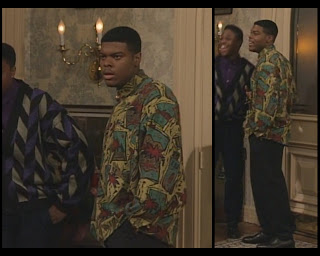 Not as great an idea: showing up in this shirt, which is basically cartoon vomit. 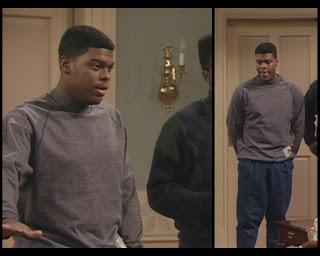 No really. I worry that Denny will murder someone.

At least when things get out of hand, he comes back the next day to help Theo clean up. His sweatshirt and pleated slacks (please tell me those aren't pleated jeans) are uninspiring, but I'm not going to make the man dress up to do chores. 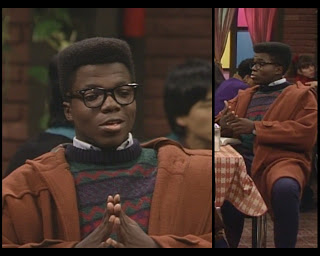 Thoughtful hands for a thoughtful man.

Howard is also present at the initial planning session for the party. His first look is a straight-up Cosby knockoff. I'm shocked that Cliff has never worn this sweater. 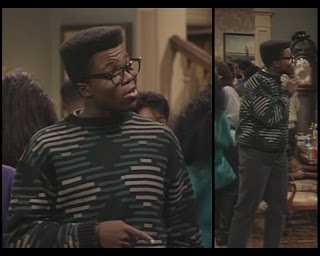 Pointing because he has a point.

Ditto on this one. Like, is this meant to be a commentary on how the Cosby sweater has permeated pop culture? Or are the costumers just running out of ideas? Because this is a great sweater, but it is totally a Cosby sweater. 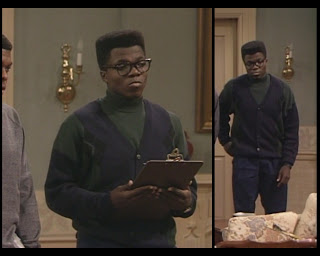 Holding a clipboard because he clips his... OK, I got nothing.

He also shows up for the post-party damage control session, possibly also in pleated jeans. Can you imagine if two of your friends showed up to your house and you really needed their help, but they were both wearing pleated jeans? Total catch-22. Is it worse to do the work by yourself or to be scarred by prolonged exposure to their fashion mistakes? I honestly don't know how I'd choose. His cardigan/turtleneck pairing is nice enough I suppose. 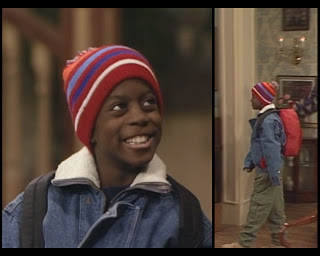 What's with everyone's facial intensity? Did someone lace the bagels with PCP?

Kenny's around this week, but we only see him in this and then pajamas. I found it a little weird that he was written into the episode. Who sends their kid to spend a weekend with someone else's grandparents? 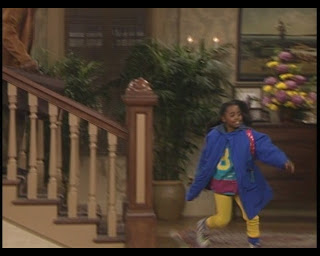 This is pretty much the only shot I could get of Rudy that revealed any information about what she's wearing. At this point, we've already seen so many outfits, it's tough to muster much investment in some child's primary-colored leggings, though. 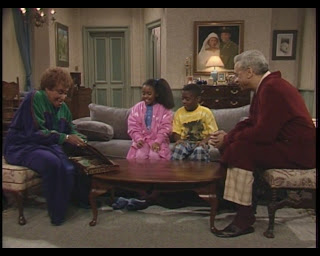 Inventing a board game was easier than getting the rights to one, apparently.

I feel bad excluding Anna and Russell, but they're in nightclothes the whole time. So here's an image of the sleepover, just so everyone can see it. 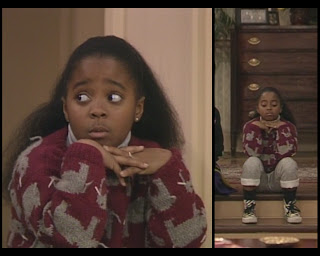 Again with the unnecessarily wild faces.

Rudy starts the next day out kind of wonderfully, balancing her childlike tendencies with more mature styling. The rolled sweatpants are frequent standbys for her, but the sweater is new and I love it. Though animal images are whimsical and youthful, the pattern is structured and the color scheme is sedate, putting her solidly past her toddler clothes without requiring her to be in adult drag. I'm into it. 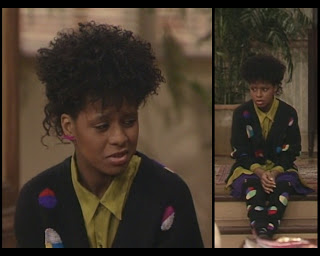 She has had it.

Vanessa appears only briefly at the end of the episode. Her outfit struck me as a repeat until I realized that the pattern on her sweater and leggings is the same split circle motif found in Theo's often-worn yellow shirt (forst seen in episode #4.11). It's too much for an all-over look. The lower half should be a solid color, or at least a simpler pattern like stripes. 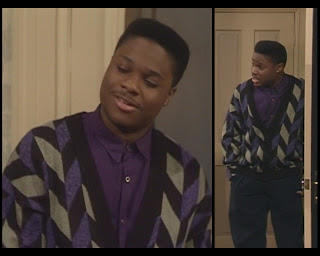 Unlike his friends, Theo did not have time to change before the party, so he wears the same outfit that he wore to the cafe beforehand. It's not terrible: I can get down with a good cardigan and a powerfully purple shirt. I can't be certain, but I think these are the same pants that Howard wears for his third look. Clever reuse, costume people. 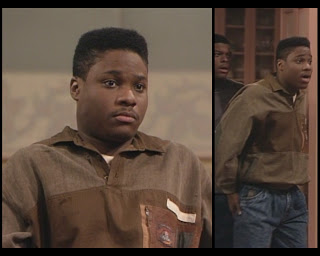 They all wore pleated jeans to clean the house. Three men, all in pleated jeans. That's how I'll be greeted when I arrive in Hell. 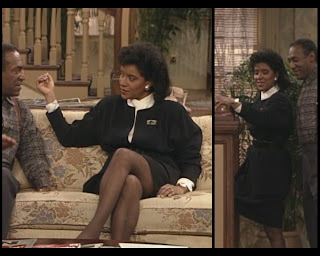 All my love. She can make whatever weird face she wants.

Do you think Clair's coworkers have trouble dealing with how flawless she is? I bet it's distracting to be in meetings with her, because you just want to stare at how delicately the collar wraps around her neck, or how impeccably the sharpness of her lapels melds with the softness of the white blouse underneath, or how perfectly the proportions of her dress match her shape, or how elegantly the monochrome look pulls her outfit together. And then you're like, "Is that pin a razor blade? She is street as fuck." 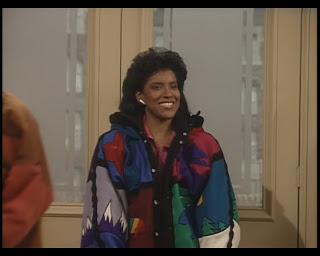 Her second look is buried under this coat the whole time. (This is actually a shot of her returning home, but it's the same coat, so who cares?) What is up with that coat though? Like, literal illustrations of the outdoors are happening. Because she wears it outdoors. Maybe it's like the portrait of Dorian Gray: this one garment suffers in absolute awfulness so that her other clothes can be so beautiful. 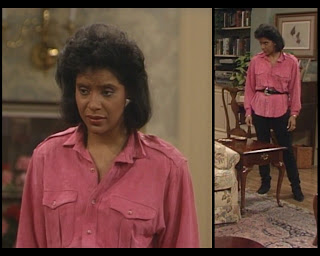 She returns home from the wilderness in this. I love that this is Clair's version of roughing it. Like, sure, it's ostensibly a work shirt, but it's pink and she belted it high and threw on boots that aren't actually hiking boots at all and then some cute leggings and basically she's auditioning for Troop Beverly Hills now. 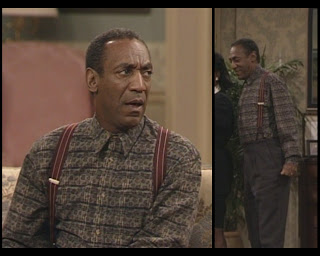 Everybody is giving weird face. Attack of the face!

Cliff, day 1, wearing the ugliest shirt he has ever worn. I can't keep looking at it. 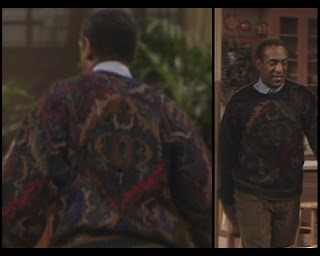 It only gets weirder.

I don't think my screencaps are blurry. I think that sweater is blurry. That's messed up. 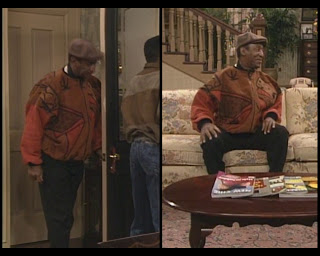 His third look stays buried under this jacket, because apparently he and his wife shop for outerwear at the same nightmare factory.

Is anyone else exhausted? That was so many outfits! And I barely talked about most of them, and left lots of people out! I should have broken this episode into two entries. I'm practically sweating. I'm gonna go nap.
Posted by Unknown at 8:00 AM