Clair gets selected as a new panelist on a long-running talk show providing a forum for the intellectual debate of historical issues. However, her presence is revealed to be a bad case of tokenism, with the old white men in charge hoping that she will speak only when "black issues" arise.

This plot is notable because it is the first time that anyone in the family has encountered an overtly racial problem of any kind. In fact, I'm almost positive that race has been explicitly mentioned only once before, when the parents and grandparents discussed their participation in the March on Washington. It says a great deal that in order for this cast to be viewed as accessible a white audience, they had to avoid ever saying "black." 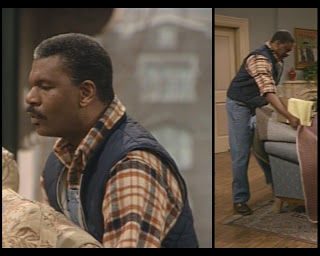 He likes to move it move it.

There's also a subplot involving a new couch that Clair has ordered without Cliff's knowledge. Richard Gant is one of the men who shows up to haul the old couch away. He's dressed like a mover. 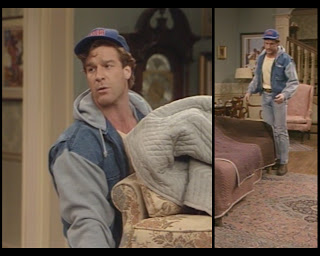 Also dressed like a mover is Kevin Kilner, who is welcome to rearrange my bedroom furniture any time he wants. 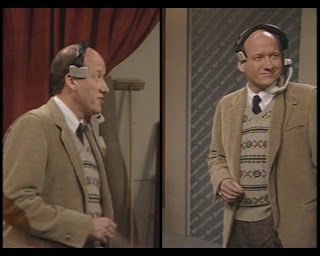 This is Richard Scanlon playing Gary, who works on the Reflections set. He's dressed pretty well for a... well, his job is none too clear. He's really into the earth tones, though the blandness of his palette makes the navy patterning and tie seem downright daring. I'd like this better without the jacket, which is too tonally similar to the sweater. 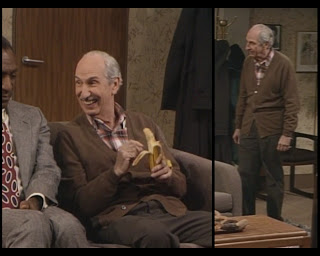 That smile + that banana = extreme discomfort.

Hector, portrayed by Rudolfo Diaz, also works backstage. His job is to hold keys and prevent Cliff from eating donuts. No, really, that's his job. Young dudes are going through another one of those phases where they want to dress like slouchy old men, so his look has a surprising amount of modern appeal. The red/blue plaid in particular is enjoying a resurgence. I am, as I type, wearing an extremely similar shirt. And everybody loves a relaxed brown cardigan, so that's great. Swap out the slacks for some jeans and you're ready to hit the bars in Bushwick. 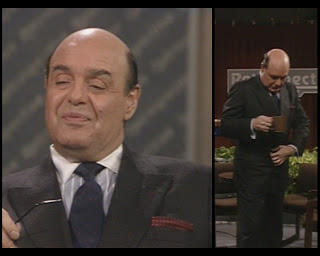 Michael Lombard appears as Mr. Benedict, the most pompous of the three on-air personalities with whom Clair battles. I mean, check that facial expression. His suit is the darkest because apparently the bad guy wears black even in a program overtly commenting on problematic depictions of race in America. (To be fair, that's more of a charcoal.) He may be a jerk, but he knows how to rock a pocket square. 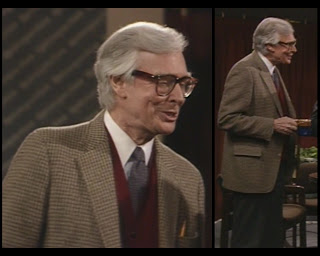 For a man out of drag, he throws a lot of shade.

Mr. Traugett, the one who actually vocalizes his racism, is played by Russell Nype. He's given a brighter look with warmer tones while still retaining his stuffy, academic air. The palette isn't too wild because in the end, everyone on the stage is giving off the air of someone you wouldn't want to get stuck talking to. 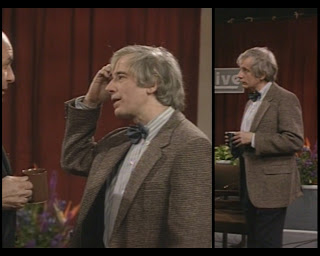 He's the weirdest intersection of smart and witless.

The most recognizable of the three men is Austin Pendleton as Mr. Kensington. He's rocking a similar vibe with the tweed coat, though he's opted for a bow tie and a patterned shirt. His hair is also a bit frazzled. Maybe he's the loose cannon of the group? 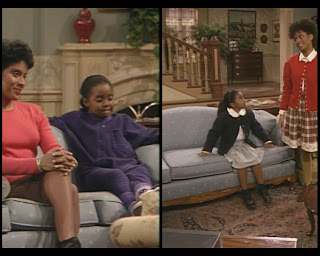 Rudy barely features this week; she has two outfits, but almost no lines. Her first appearance is an all-purple creation that isn't pajamas, but could be mistaken for pajamas by even a trained professional. For her going-to-church look, she's keeping it classic: black cardigan, white broad-collared top, gray skirt, and black shoes with black socks. It's a shade somber, but not inappropriately so. 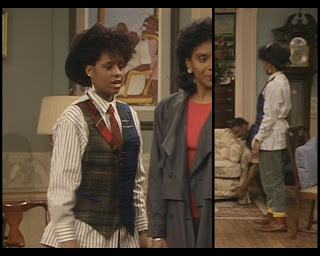 A solid investment. See what I did there? With the vest reference?

Vanessa's first presentation is mostly a success. I'm a fan of her appropriation of old-school masculine tropes in a modern context, and while the shape of the shirt is a little off, she gets a lot of the detailing right. The width of that gray strip is a particular victory. On the other hand, I'd love it if her vest stuck to a single plaid, rather than incorporating all three. Any one of them would be great, but together they come off as trying too hard. 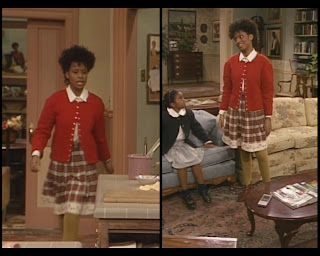 Her church gear is pretty great. The overall construction is similar to Rudy's, but in contrast to her little sister's lack of color, she's gone for a bold red cardigan and a plaid skirt with a trim. The sickly tone of those tights gives me pause, though. I'm all about contrast, but a truer yellow would have been better than the greenish mess she selected. 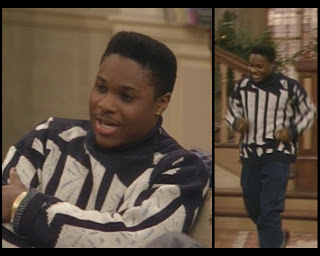 Theo starts us off with some repeats: his episode #3.13 sweater with his #5.10 pants. They don't complement each other particularly well; he's another one who may as well be wearing pajamas. 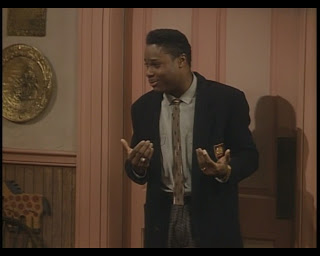 He's doing a little better with his church outfit. I particularly like the pairing of shades with the pants and shirt, though the tie ruins pretty much everything. The desire for breadth in the '80s also does terrible things to his jacket. And he could do without that emblem on the chest. So really, this isn't great. 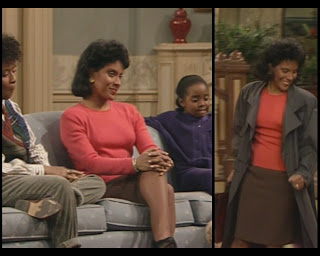 She tries and succeeds.

Clair starts off in her episode #5.4 coral shirt paired with her #5.3 skirt. The colors play nicely together, but it's an otherwise unremarkable creation. 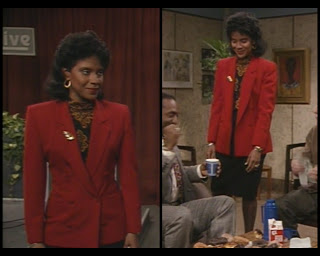 This new outfit is actually also a union of previously seen pieces: her #5.3 jacket with her #5.10 blouse (which actually first appeared in #5.4, a repetition that I initially overlooked). I'm sure that's a repeat black skirt, simply because there would be no need to buy a new one. The resulting union is impeccable, communicating a commanding presence while remaining professional and controlled. She is, as ever, winning at life. 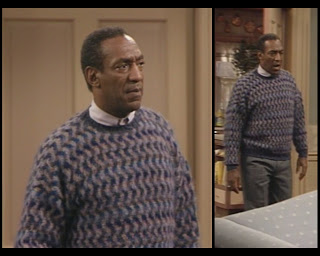 TV static from another dimension. The secrets to life are woven into this sweater. The shirt beneath is appropriately plain, but I'm surprised he's got his collar buttoned. You're at home, Cliff! Relax! 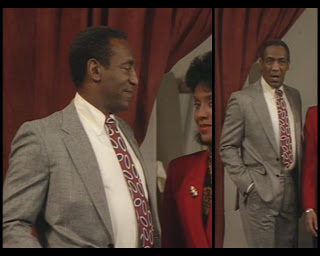 Unfit to be tied. (Sorry, I ran out of captions two seasons ago.)

I won't comment on the gray suit, because it's flawless. I will, however, comment on that tie, which has no redeeming qualities whatsoever. Get your business together, Doctor!

Alright, that about does it. Now go find a publication that discusses racial politics on The Cosby Show and read what it has to say about this episode, because it's probably fascinating.
Posted by Unknown at 1:51 PM