Grandpa swings by with the implausible revelation that, because he knows one of the guys in Michael Jackson's band, he was able to score eight prime tickets for that night's sold-out Madison Square Garden concert. Clair and Cliff volunteer to stay home and babysit despite Elvin's belief that the twins cannot survive outside of his line of sight. Halfway through the night, Clair is called into the office (which also seems unlikely), leaving her husband alone to do some top-notch solo comedy with the babies. I'm sure lessons are learned or something, but mostly I just wondered whether it cost the production team a lot of money to have the family sing "Beat It" as they left the house.

Also, apologies that this wasn't posted on time today. 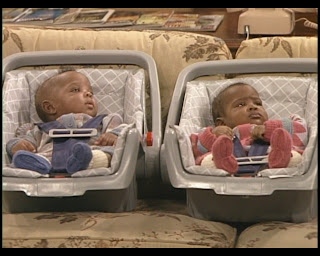 If you're into that sort of thing.

This picture isn't included for fashion reasons. I just thought you'd like to see some cute babies. Say hi to Winnie and Nelson. 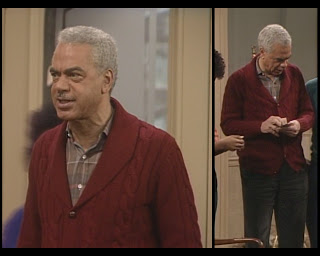 You won't be this cool at his age. It's not possible.

When Russell comes over, he's finally serving a new garment, and it's flawless. We've seen the shirt and pants before in episode #4.16, but oh that brick red cardigan. The wide collar is dangerous but ends up suiting him, the shade is flawless, the construction is about right, the braiding is the good kind of elderly... I'm digging it and I want one of my own. 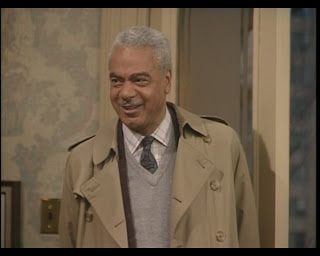 What do you think his favorite track off Thriller is?

This is his Jackson concert getup. I think his tie is an attempt to look a little younger and fresher, but it's not sparkly or anything, so I applaud his subtlety. The rest is clean and light and I love every bit of it. 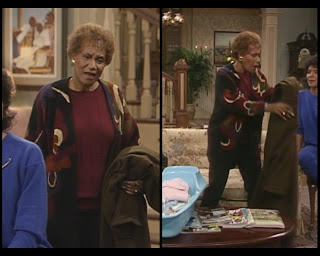 Not pictured: the one glove she eventually dons. No joke.

Anna shows up for the concert dressed like Anna. Again, she's not necessarily trying to be young and fresh; this style has a little embellishment with the swirly stuff in the cardigan, but is mostly pretty sedate. I don't condone the extreme boxiness of it, and she could do with less black to make it seem more cheerful. You're seeing Michael Jackson, brighten it up! 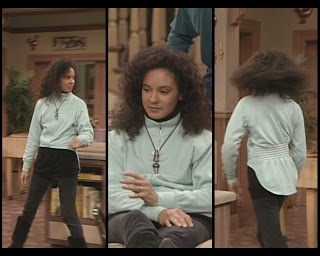 Denise is gone. Deal with it.

Parts of Sondra's first offering don't bother me. As a new mom, she's obviously keen to show off the post-pregnancy bod, and has thus selected a rather slim cut for all her pieces. The leggings with high boots are a particular win in my eyes. I can get behind her overall color story, too: the pale seafoam is a great counterpoint to the black and dark gray. There's potential in that coat: the idea of using a classic construction and modernizing it is sound, but the execution looks a hair cheap. It ends up feeling like a knock-off of a better piece. The black top underneath that is also problematic. I want it to be longer, so that it can be properly referred to as a short dress rather than a long shirt. Maybe with a belt or some additional tailoring involved. As for the crystal necklace, it should be worn by an extra on Buffy the Vampire Slayer or not at all. 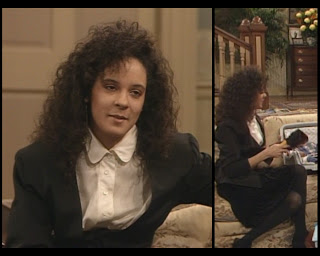 It's really hard to capture her not making a wonky face.

She's holding with the Renaissance Realness for the show at MSG, but this one works better for her. The getup seems suited to a more formal occasion, but I like it when someone's not afraid to get overdressed. I know I just shaded Anna for too much black, but it works here; the severity is sort of half the point. You are hereby encouraged to show up to a party dressed like this. Ridiculous? Kind of. Fabulous? Absolutely. 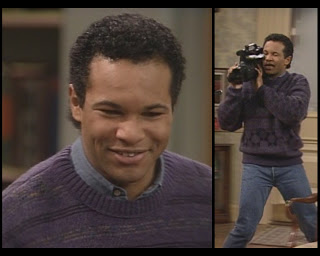 Elvin is starting down the road paved by his father-in-law with this sweater. As you can see in the closer shot, those stripes are made of subtler, even smaller stripes, including pale inclusions that you can't even necessarily see from far away. That pattern transitions into a sort of sunburst/honeycomb configuration across the stomach and down the sleeves, but it all kind of coheres. That soft purple is really what cements this for me, I think: it's just the right hue for him. Otherwise it's denim all around, unremarkable in all ways. But letting this sweater shine by surrounding it with plainness was the right way to go. 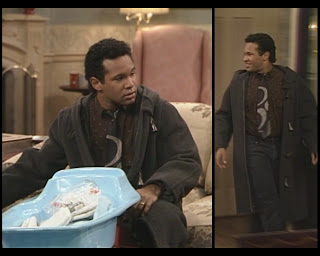 I mean, I guess people wore ties to concerts in the 80s? Or, like, they did if they were dads? I don't know. He's overreaching in trying to do cool patters with a decidedly un-cool overall look. People are going to recognize that he's a dweeb no matter how hard he tries to mask it. 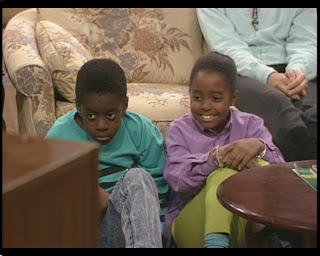 You two have differing opinions on this video, huh?

Kenny and Rudy don't get separate screen shots because you're just not that invested in what they're wearing. Like, are you? I'm sure not. Kenny is leaning HARD on that acid wash. It doesn't complement his teal shirt particularly well. Rudy is going for broke on assertive colors, with a springy lilac/chartreuse combo that I guess isn't awful. 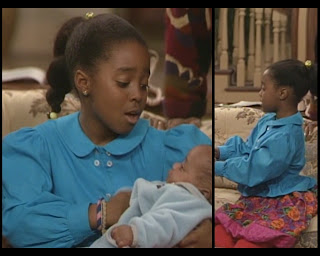 Baby's first "what not to wear" lesson.

Rudy's assertion that Michael Jackson will notice her in the audience seems infinitely more plausible when you realize that this is what she'll be wearing. She has puffed herself up to twice her usual size, much in the same way a cornered cat will arch its back to fool attackers. To maximize the impact of this ruse, she has employed a range of bright, clashing colors that will disorient the viewer. It's an interesting and surprisingly sinister motivation for building a look, but hey, whatever works. 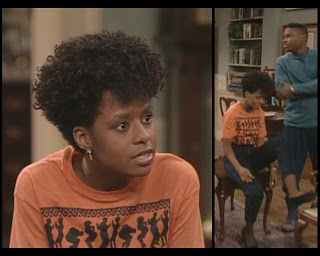 Vanessa doesn't get much screen time this week, but she seems to have a solid getup going. High-waisted pants can be very flattering, and while this specific pair has a couple fit issues (I know, I chose a seated example, so you'll just have to trust me), I like the effort she made. The pants also have a faint stripe, which I'm pretty into. Print tees have their place, and this one isn't the worst I've seen; I'll allow it. Basically, things could be so much worse. 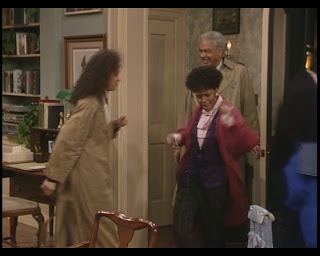 Jamming the eff out.

We barely see her second creation, but she's following Sondra with that pink ruffly shirt and purple... vest or maybe jacket? Unclear. The second pair of striped pants is about as solid as the first. This is a look; not her best, not her worst. The end. 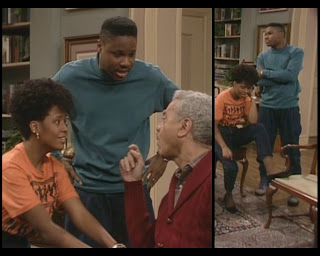 I ask for so little, and still he gives less.

Theo has resurrected his awful episode #5.10 blue pants (which I oddly didn't single out as offensive in that review) and paired them with a boring teal shirt. Great. 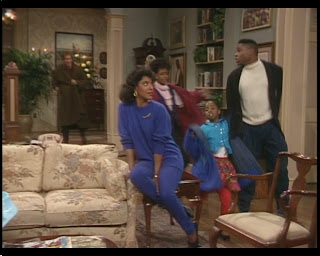 See? Not even a full costume change.

For the concert, he keeps the pants (boo) and deploys a white turtleneck and black blazer on top (meh). 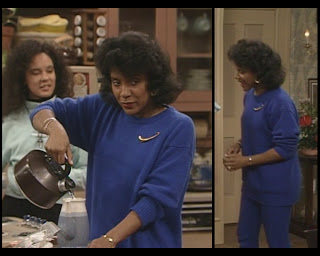 As you caught in the previous screencap, Clair has a head-to-toe cobalt thing happening. I'm not 100% against the concept of an overlarge sweater and leggings, but it baffles me why you'd want them to be the same color. That pin is basically the only thing the eye has to cling to on this whole outfit; in the wrong setting, she'd be practically invisible. 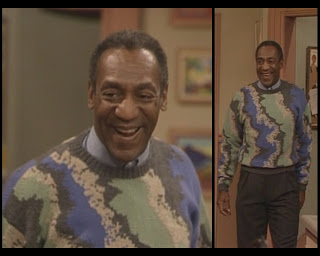 Grandfathers are so happy to be grandfathers, guys.

If Sailor Moon were to get into a fight with Cliff Huxtable, this sweater would be the background against which he delivered some sort of special move that she had to dodge.

And there we are! Michael Jackson did not appear this week (did you really think he would?), but I'm sure there are other guest stars waiting in the wings. Until next week, dears.
Posted by Unknown at 3:12 PM