Vanessa has a boyfriend, but her eagerness to see him causes problems when she begins lying about her whereabouts and missing curfew. Rule breaking is not overlooked or tolerated in the Huxtable household, and the young lady and her beau both receive stern warnings.

(The DVD places a different episode in this slot. As usual, I am putting my faith in the IMDb.) 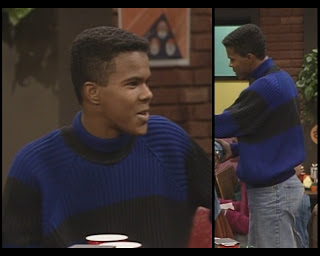 If  a date told me "I need you," I'd probably never speak to him again.

This is Jeremy, the boyfriend, played by Christopher Carter. His cobalt and black sweater reminds us of season one, when that combination was everywhere. The advent of knitwear that fits the body is still several years off, so of course he's swimming in that turtleneck. Effort has been made, through pattern and texture, to impart some structure, but it's just no use. His jeans are a little light, and the weird point on his butt cheek suggests that they're too roomy; there's probably a good inch between that peak and his actual ass. (Not that I'm looking at a teenager's ass. Seriously, with all the government surveillance going on these days, you can expect this blog to be discontinued next week because I've been thrown in jail.) 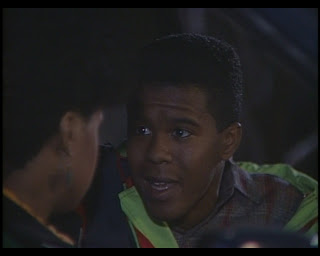 At least he has a car. Or can borrow one.

Though he changes clothes to meet Vanessa for their vehicular makeout session, we only see him from the shoulders up, leaving us to forever wonder just how ugly this shirt might be. 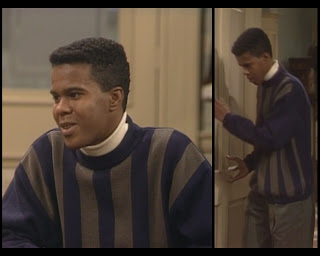 Mock turtle, real turtle. It's like layering by Dr. Seuss.

The man likes a turtleneck. This is the respectable outfit he wears to greet Vanessa's parents, knowing that they will tear him a new one. I can see how he would think it looks grown up, so I'm giving him a pass. It's entirely possible that he pulls these items out of his closet only in emergency circumstances. 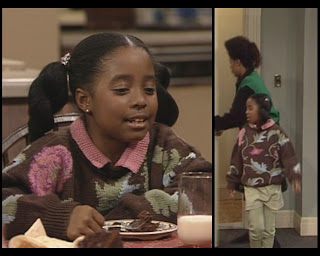 Old lady is the new child.

Rudy busts out another skirt-over-pants look. I can't entirely comprehend the point of it, and I'm hoping it stops soon. Up top, the sweater is sort of blah. Patterns like that always make me think of an old person's wallpaper. Plus, collars made of thick material like that never lay nicely, and are thus more of a hazard then a help. I'll credit her for the pink that frames her face, though. Almost everyone looks good in one shade of pink or another. 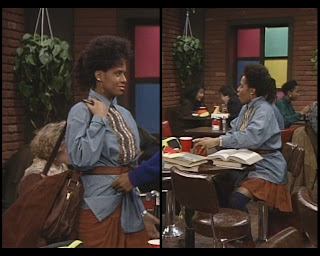 Oh, Vanessa, you little troublemaker. For her initial date with Jeremy, she runs in several directions at once, stylistically speaking. The full skirt and matching belt resonate with me, and the denim shirt with a pattern down the front isn't a terrible idea, though I might have enjoyed a different pattern. Those stripes in those colors just aren't landing. But the knee socks don't do it for me. They're too suggestive of thigh highs, which I'm sure was the point, but she's a little young for that. No Lolita detailing, please. Also, though I've been warned before about the dangers of being a white man and telling a black woman what to do with her hair, and I honestly sympathize, I think we can all agree that her ponytail is a problem. 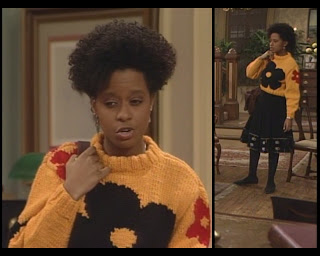 You know what? The sweater is actually kind of cute. The colors and print are both assertive and playful, the cropped length sort of justifies the overall bulk, and the lumpy collar has a quirky appeal. But she pushes it too far with the skirt. Since it's all black and paired with black tights, it ends up looking dour even with the jokey hemline. (You can see in close-up that those white markings are actually a ruler.) 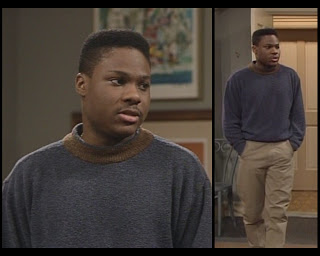 Theo is trying to look more collegiate these days, with simpler lines and more muted colors. I guess it sort of works. There's a lot of blobby mock turtleneck getting thrown down this season, and I could do without it, but his effort here is at least inoffensive. 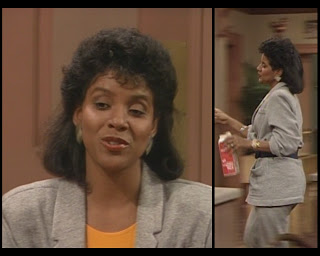 Dressed up and dressed down. So, just dressed.

Clair's initial appearance has promise, but only from the waist up. The creation of a structured blazer made out of sweatsuit material is welcome (and would be more welcome if the shoulder pads were removed), and the yellow tee keeps it casual while the black belt classes it up a bit. But this garment is begging for jeans, and she's ruined it by wearing matching sweatpants. Matching sweatpants are never the right answer. You shouldn't even own sweatpants. There shouldn't even be sweatpants in the world. 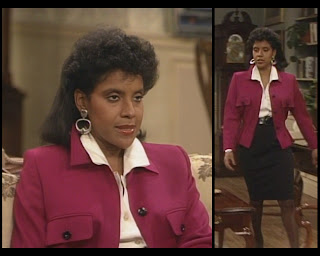 Who in the world is dumb enough to cross this woman?

I'm pretty sure that this is Clair's perfect skirt from episode #5.10. If so, then I'm glad it's getting more air time. If not, then I'm glad she has such a thriving collection of beautiful black skirts. Win/win! The outfit is completed flawlessly with the clean white blouse and daring fuchsia jacket. She's good on the accessories, with the simple belt and black hose to keep it together. Also, people talk a lot about doorknocker earrings, but it's rare to see a pair that so closely resembles actual doorknockers. 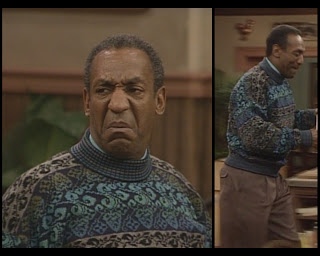 This is perhaps the best possible Cliff Huxtable outfit. It's a wild sweater, but not a gross sweater. The colors are unexpected and a little outside the realm of what we see on typical dads. The patterns are complicated without getting crazy. The hues of his pants and underlying shirt integrate well with the featured knitwear, and the individual pieces actually fit him. He looks splendid. 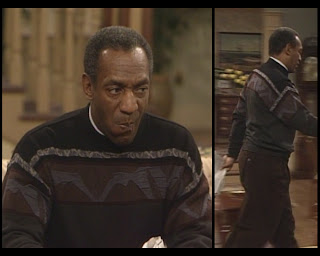 Thinking about getting stank.

And honestly, this one isn't half bad either! Again, his palette is refined and cohesive. The tailoring is clean. The embellishments across his chest (could we properly refer to that as flocking?) are just far enough outside the bounds of our usual fashion standards to be enjoyable rather than unpleasant. My only complaint is that in both cases, his shoulder seam is hitting several inches past his shoulder. I know I mention this with some regularity, but there's really no excuse. Get it together, 1980s!

Well, it was a short week, but a good week. See you next time.
Posted by Unknown at 8:00 AM