Season 5, Episode 9: How Do You Get to Carnegie Hall?

A video karaoke booth at the mall (where is this "mall" the kids keep going to?) convinces Vanessa and her friends that they could be a successful girl group. Dubbing themselves The Lipsticks, they shriek their way through "The Locomotion" many times, never quite recognizing the limits of their abilities. There's also some minor excitement when Russell, while on vacation, receives an envelope declaring him a sweepstakes winner. Cliff and Theo conspire to open the letter and find out what he's won while Clair repeatedly intervenes to prevent her family members from committing a crime. 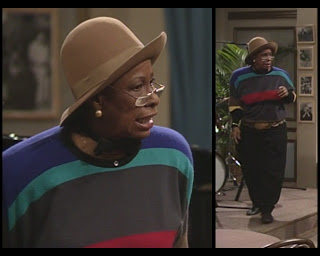 Sing from your hoo-hoo!

As part of their creative  development, the ladies seek a single voice lesson from professional singer Amanda Woods, played by jazz legend Betty Carter. Since a Google search turned up no images of Ms. Carter in a tiny bow tie, I have to assume that this choice is an invention of the costuming department. The overall look for her is a little slapdash: uneven horizontal bands of random colors, a tan hat that doesn't fit her particularly well, black harem pants that are even less suited to her shape, a grody belt, the aforementioned bow tie (with no collar around which to tie it), and a distracting white button beneath. What is all this nonsense? I know she's just rehearsing, but she expected company. Spruce it up, hon! 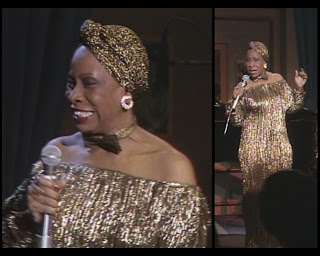 At the end of the episode, the family goes to watch her perform. Other than the continued application of the bow tie, I'm supporting this. Like, it's a little over the top, but she's a singer on a stage. If you're asking people to pay, you may as well make your outfit into an event. The all-over textured gold creation, with bare shoulders for a splash of sass, is a great look for her age and profession. 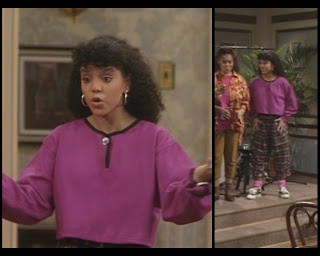 Oh, Kara, you motor-mouthed fashion victim. I'm horrified by this. The wide, too-short shirt with gross detailing at the collar is terrible, but pales in comparison to the garish, haphazardly tailored plaid pants. And then those pink socks? This is offensive. Preposterous fits have a short shelf life, and this outfit probably expired roughly ten minutes after it was made.

Oh, dear. She briefly appears in a second outfit, but I'm away from home and don't have access to that image right now. I'll update Monday night to ensure completeness. Sorry. 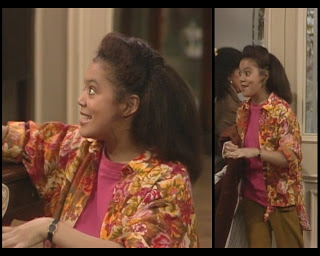 I'm pretending those aren't sweatpants. I need to.

Janet's floral creation is cohesive, if misguided. The pinks, yellows, and deeper mustard shades all hang together well, even if I'm not personally a fan of the combination. I think the top shirt, while adding some complexity to make this worth looking at, is what ruins it for me. The base is plain, but difficult to insult. 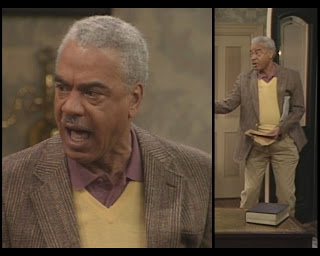 Sweet duds, as ever.

For this appearance, Russell wears his episode #4.5 blazer over his #2.25 lilac shirt and a yellow sweater that, honestly, I know we've seen before even if I can't find where right now. Everything works except the jacket, which needs to match the pants a little less closely. A darker brown, or a different shade entirely, would have been better. Otherwise, he's bringing it as always. You deserve the toaster you won, sir. 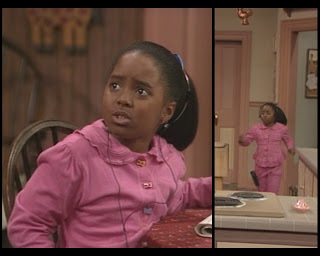 Rudy is in all pink ruffles and cannot believe that I would dare to question that choice. Oh, I'll dare. 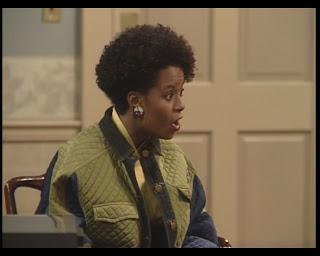 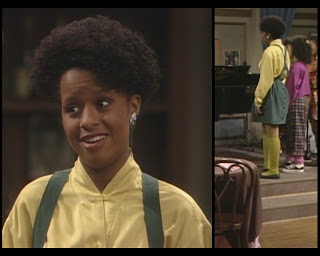 You know, I feel bad ragging on this, because she's doing a few things right here. To unify things, she's staying in the green/yellow continuum. The fun details like the non-standard collar and the suspender-y straps and the buttons down the back of the skirt are assertive, even if they're not astounding. But the proportions are too ballooned, and the matching socks pulled over her tights make it look like the fabric is sagging and bunching, so this is one of those either/or situations. If she narrowed the sleeves, I could see the top half of this working, but the lower section might have to be abandoned and rebuilt from scratch. 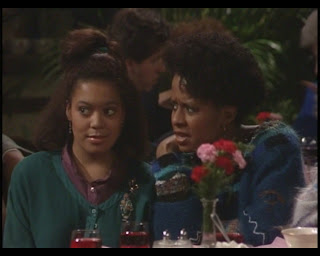 The confusion is mutual.

Vanessa and Janet's looks for the concert are given relatively little exposure. They both appear to be wearing ugly sweaters, and should think about trying something else next time. 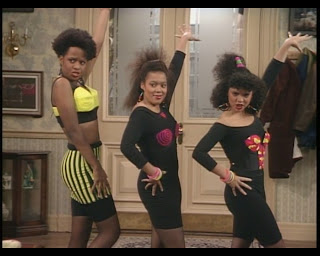 Yeah, confusion seems to be going around.

Then again, when left to their own devices, they created this as their show-stopping girl group couture. Clair berates them for dressing too sexily, but I'm not convinced that anyone would look anywhere other than away. 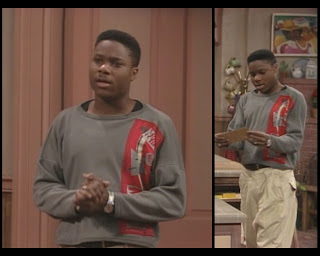 You need to come back to us. Please.

Too-short tops. That's gonna keep happening, huh? Theo's getting in on the action with this wide-necked, cropped gray sweatshirt. He at least busies things up a bit with the red graphic on the side, but I'm not overall thrilled with the selection. Those garbage bag pants aren't spectacular, either. I think this whole family has lost its way somehow. 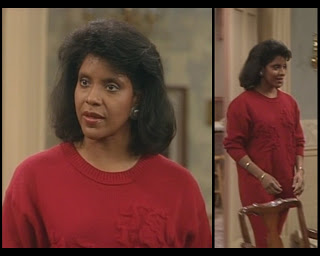 The tendency toward wearing all one color will simply never make sense to me. Sure, it's easier, but you almost always look completely bland! Clair works her hardest to use the bunched sleeves and raised design on her sweater to justify the matching pants, but it doesn't work. This piece needs help, and she doesn't provide it. And if she can't manage it, then don't you even try. 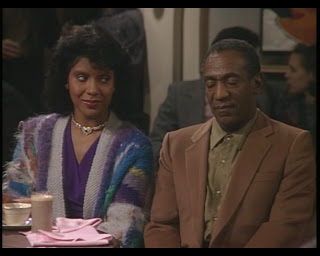 My sweet goddess. How can you hurt me so?

No, Clair! How could you do this? I bet the look is fine without the fraying, shaggy cardigan, but that wispy, dingy nonsense has dampened the whole situation. 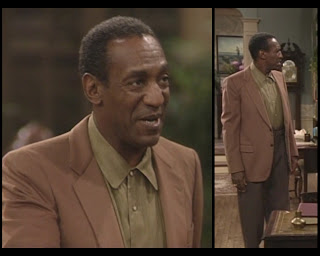 And the brilliance begins.

This is actually Cliff's second look, but since we just saw it, we may as well continue with it. The buttoned top button isn't great, and the pants are pulled up too high, but he's got a good palette going, while the rest is a classic take on men's semi-formal attire. Extra points for the barely-patterned grass green. 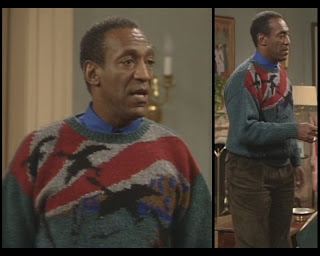 Cliff's first look is also pretty great. I mean, yeah, pleated cords, a shame. But the bizarre graphic sweater with the geese and the Japanese flag sky and the dark colors against the cobalt collar: all that is phenom. Good going, doc.

Sorry this one was kind of short, guys. I'm out of town and typing between games of 20 questions with my six-year-old nephew. He's awesome.

UPDATE: Below is Kara's final look. 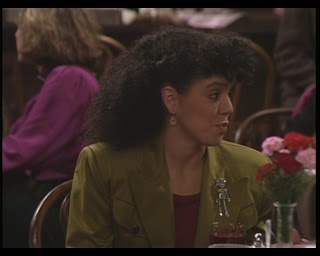 Completely not worth waiting for.

Not that we expected a high level of taste here, but did she have to clutter the puke green blazer with those nonsensical pins? That must be jewelry designed by kindergarteners she babysits or something. Also, the profile view of her hair is insane. Your head should never be that shape.
Posted by Unknown at 8:00 AM