If nothing else, I'm pretty sure this episode will stand out for having the worst title of the entire series. There are two parallel stories this week. First, we learn that Rudy wants to earn money from her father so that she can order a tacky piece of catalogue jewelry for her mother. She does chores for Cliff to earn the cash, but makes him promise to keep silent about their arrangement, leading Clair to believe that Rudy is simply a deeply industrious child. Meanwhile, Theo learns that Howard and Julia have broken up, but his intricate plan to ask her out ends up misfiring when she decides to date his friend Denny instead. 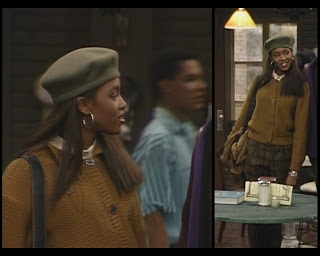 Cover girl! Put the bass in your walk.

Naomi is still holding it down. The British schoolboy inspiration nods at her country of origin and adds a playful quality to the demure coverage of her long sweater and pants. The spectrum of ocher, brown, and mossy greens holds together flawlessly, and the slightly baggier fit is justified in the more traditionally masculine styling. And who could say no to a giant safety pin brooch? (My one quibble: I'd have placed it differently so that we could see it better, since it's obscured by her hair.) 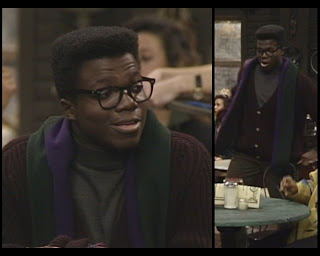 You left her because you need to study more?!

Howard is sticking with his academic look, rocking a turtleneck, cardigan, and corduroys in a manner that almost suggests a professor more than a student. His palette is a little dour, though; even the burst of eggplant in his scarf is too dark for my tastes. This outfit is begging for some brightness somewhere. 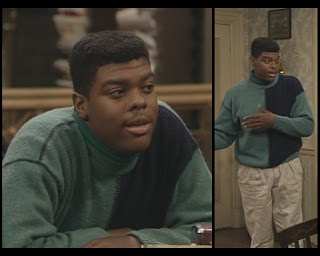 If Cockroach were still around, this would have been his plotline. Clearly, Denny is now fulfilling the role of best friend. Those pants are a wrinkled, pleated, overly light disaster. I'm not horrified by the sweater, though I think it's too literal: in a story where he's accused of being two-faced, don't give him a split shirt. Like, we get it. Also, what's going on with his collar? It's like if a turtleneck got constipated. 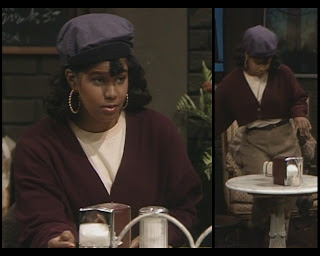 He's a cheater who's too cowardly to start a conversation? Sure, I'll say hi.

The episode ends with a creepily misguided moment in which Cliff goes to a coffee shop with Theo to help him pick up women. Note to everyone: your dad is not a good wingman. Sheila, the woman he approaches (who doesn't run screaming, oddly), is obviously meant to mirror Julia in terms of style, since she's rocking a similar hoop earrings, cap, sweater, and pants configuration. The cropped cardigan is an interesting idea, but overall I think she's leaning a little too heavily on the "slouch" aspect of slouchy chic. (I tried to figure out who this actress is, but couldn't. IMDb lists her as Hazel Medina, but Hazel Medina was born in 1937. If this is a 50-year-old woman, then someone needs to drive a stake through her heart before she feeds again.) 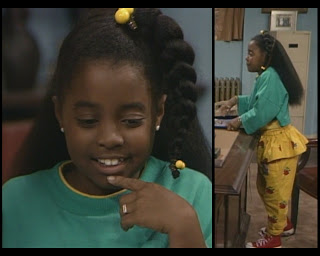 Does she have to earn money for her parents' gifts every year?

What is even going on with you, Rudy? It would be one thing if that shirt was just too big, but the fact that it's also too short leads me to believe that it's intended to fit like that. I guess you need a crop top if you're going to show off the waist ruffle on your yellow tight-rolled Hammer pants. This is a mess. 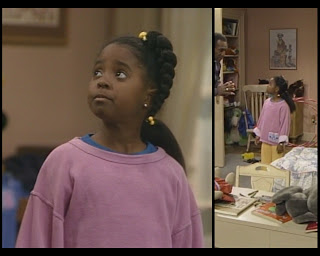 I feel like her room wasn't that dirty to start out with. 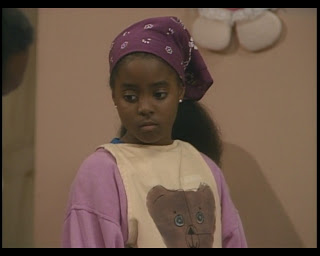 This family understands the importance of costuming.

And, because she's working, she throws on her apron and bandana again. I love that she has a cleaning uniform. So weird. 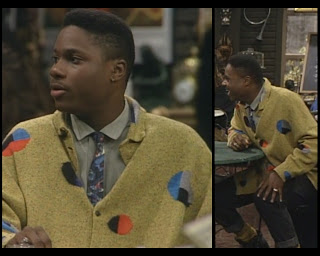 Vanessa's absence is unexplained. No one so much as mentions her.

Theo has pulled out his episode #4.11 shirt again, with a different collared shirt and tie underneath. I think this piece is becoming less and less viable as a top layer. The more fuss put underneath it, the less justified he is in sporting this bold yellow nonsense. Plus, he's rolled his jeans high just so you can see that he chose matching yellow socks. Dude, those are nice jeans. That gray shirt isn't bad. Quit while you're ahead. 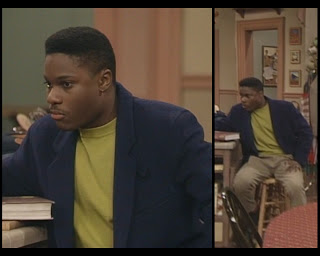 Are we sure this blazer hasn't showed up before? I'm not so sure.

Yeah, I hate this. That chartreuse pairs terribly with the khaki, the heavy jacket worn indoors looks ridiculous, the patterning on the coat is so subtle that it may as well not be there. Nothing here is good or interesting. 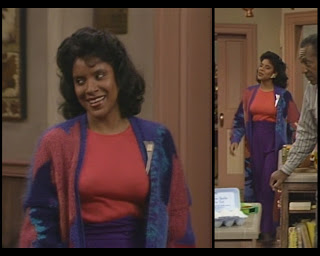 Well, at least Clair's look is interesting. It's unclear what she was going for when she juxtaposed those high-slung pants with a long cardigan. "I have miles of pelvis" is an odd assertion, right? The color scheme isn't bad; it reminds me of corals and gemstones, and the brightness is a welcome change from the drab winter colors we see everywhere else. This isn't her greatest creation, but I don't despise it. Except for the pants, maybe. Yeah, the sweater's kind of not great either. What I'm saying is: decent shirt. 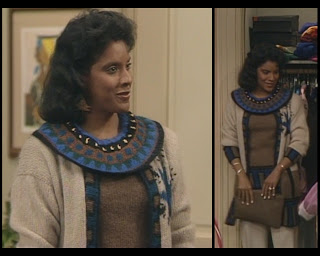 Never has Clair's goal of "business-casual Nefertiti" been more apparent than in this creation. 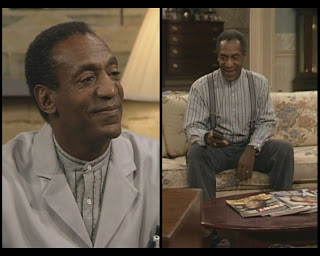 I think we've seen this shirt, too. I need to get better at tracking stuff.

I'm surprised at how sedate Cliff's outfit is here. Since this is an office day, maybe he decided not to frighten any women into early labor with one of his knit nightmares. All gray keeps the doctor away. 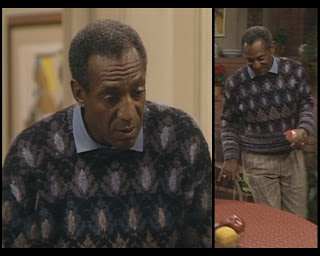 The top and bottom shouldn't go together, but they SO DO.

His second sweater has a leafy, feathery thing happening. It' fine. Those pants last appeared in episode #4.4. 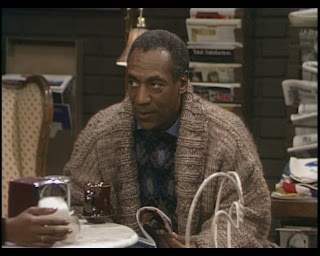 Nope. Take it away.

When he goes out with Theo to pick up girls (still ew, by the way), he wears this over his other sweater. It's not even a garment; it's woolen armor. This is some sort of Cosby Voltron. I worry that he will continue layering until he is an impenetrable dreadnought of fuzzy, pudding-fueled wrath. Run for your lives.

Sorry, the heat has destroyed my brain. See you next week.
Posted by Unknown at 8:00 AM