Sondra surprises everyone by having not one, but two babies. (She was keeping it a secret from the family and/or the writers hadn't decided on the twin thing until they came up with the script for this week's episode.) At home, Theo struggles with his crush on a friend's girlfriend, which is particularly awkward given that Justine is, like, right there. 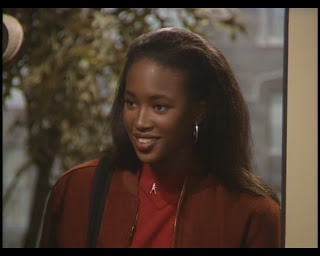 Also, the woman in question is Naomi Campbell. 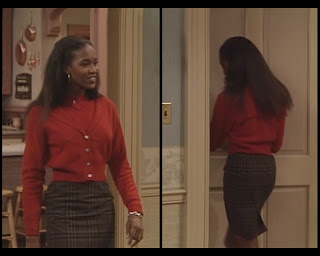 Not even fierce. Full-on ferocious.

That's right, the future supermodel made an early acting appearance as Julia, the impossibly beautiful young lady who enters Theo's home and heart. As the walking embodiment of glamour, she can make just about anything look good, but this outfit is legitimately pretty stellar. For starters, everything fits flawlessly, which is rare for this show, or really this decade. Head to toe, she's totally demure and classy, from the red sweater set (with schoolgirl capelet) to the just-above-the-knee faux Burberry skirt to the debonair silver pin at her neckline. She screams aristocracy. Living for it. 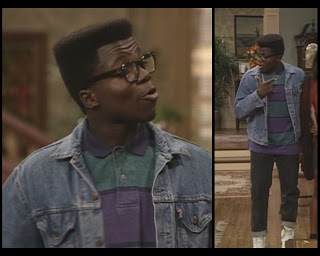 Why are glasses associated with intelligence? They just mean you can't see!

Her boyfriend Howard is played by Reno Wilson, in his screen debut. His most recent role is Officer Carl McMillan on Mike & Molly. Howard's whole gimmick is that he does exceptionally well in school; he later reveals that this is because Julia is attracted to his brains. The look he's serving up has sort of gone away and come back, in many respects. You could see those glasses and jeans and high-tops today; probably the jacket, too. Maybe not that exact shirt, but horizontal stripes and a fully buttoned collar would surely make an appearance at a gathering of trendy young people. So yeah, these are just more examples of why people dress like they do now. 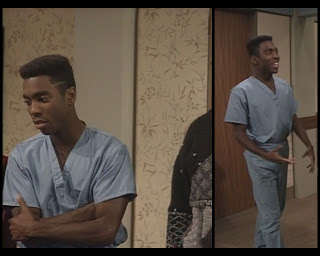 Stop shaving that line into the side of your head.

Remember Jerry from episode #3.16? Well, he's Sondra's obstetrician now. It must be all kinds of weird to look at your mentor's daughter's vagina while he's standing next to you. 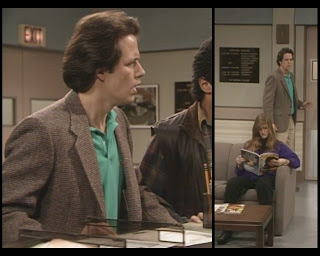 Lots of jokes about husbands going crazy when wives give birth. 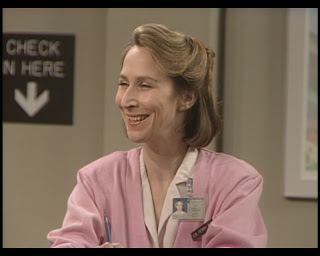 This is shade. (I'm overlooking most of the hospital staff because no, I don't want no scrubs, but her condescending smile is too perfect to bypass.) 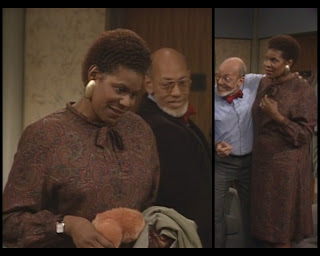 I call this dress "pussybow monolith."

Elvin's parents make their first appearance this week. His mother Francine is played by Marcella Lowery. If you were a child of the '90s, you might recognize her as Grandma Jenkins from Ghost Writer. She's a little young to be Elvin's actual mother. I mean, she's 16 years older than him, so it's possible. Phylicia Rashad is only ten years older than Sabrina Le Beauf! But still, I think this dress was intended to age her up a little. It's awfully dowdy and shapeless, and the pattern is simultaneously fussy and bland. There's a lot that could have been done to make her look good, and they went in the opposite direction. 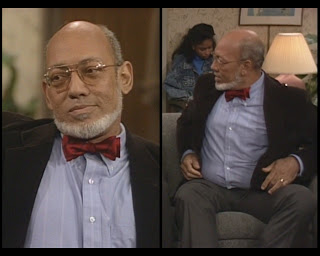 Lester Tibideaux is played by Kingston-born actor Dennis Scott. Sadly, this marks his first and last television gig: he played Elvin's father three times and then passed away at the age of 51. There aren't a ton of innovations in this outfit: a periwinkle shirt and gray pants are standard to the point of being a uniform, though he gets a little saucy with that bow tie. I'm a fan of the jacket because, if I'm reading it correctly, it's chocolate brown rather than navy or black. Maybe it's just faded, but I'm choosing to believe that he went with an unexpected option. Also, the shirt gets a little credit for having subtle stripes. 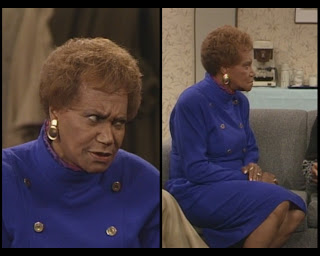 She has permanent crazyface. I cannot find a normal-looking still of her ever. 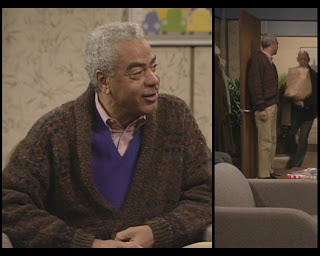 Everything new is just old again.

Ever the recycler, Russell appears in his episode #4.16 cardigan, his #4.5 pale pink shirt, and khakis that have appeared countless times. Shockingly, that eggplant sweater seems new, though I'm not convinced that someone else didn't wear it at some point. I'm too lazy to check. It's lovely, and would be better without that pile of dirt covering it. 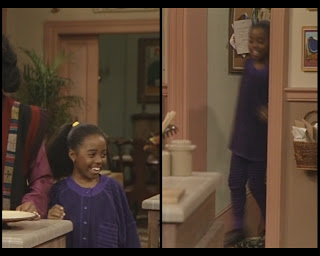 Where have you been?

Rudy was gone last week, but jumps in right at the end today in a purple stripey thing. Tim Burton has pretty much ruined horizontally striped leggings by now. You just can't rock them anymore. 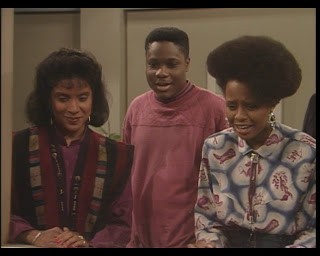 Also, Vanessa takes her jacket off and we get to see that she's wearing a southwestern disaster, perhaps to honor her sister's ill-advised foray into similar territory. There's something in the dreamy cloud-visions aesthetic that comes close to making me enjoy this blouse, but then the bolo tie comes in and murders my eyeballs and it's all over.

And that, my friends, is that. I'll leave you with this thought: Winnie and Nelson are great names, but isn't it a little creepy to name siblings after a married couple?
Posted by Unknown at 8:00 AM