Season 5, Episode 11: Is There a Hamster in the House?

Rudy's friend Carolyn returns to the show, this time with a pet. It's unclear why she beings her hamster to the Huxtable household in the first place, knowing as she does that she will not be able to leave with the animal. (She is going to spend the night with her grandmother, who does not like pets.) It takes some convincing, but Cliff eventually agrees to hold onto Darren for the night. The hamster dies, but not before a lengthy, expensive, and frankly implausible trip to the emergency vet. The next day, Carolyn sees through the family's ploy to mollify her with a replacement rodent, but reassures them that this has happened many times before.

Oh, and speaking of pets: a pet peeve of mine is people saying and writing "hampster," which made this episode rather difficult for me. The DVD menu even includes the P in the title! 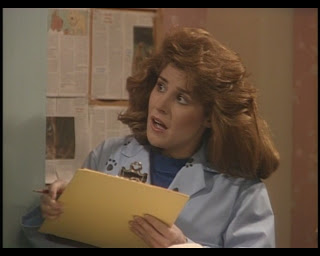 Her stylist is a cat.

The overnight animal emergency room clerk is played by Diana Georger. This role marks the beginning of her sporadic on-screen career. Though hired to deal with animal emergencies, she still wears a whimsical coat with tiny paw prints on it. Which makes sense, given that none of the clients in her waiting room have actual emergencies, even though Cliff repeatedly stresses that it is 4:00am. 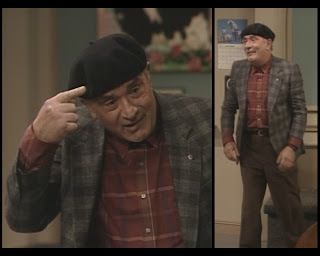 So, there are one or two indicators that he's "goofy" if you look closely.

The first of two (uncredited, at least on the IMDb) non-emergency patients is this heavily accented man. His dog, he says, is depressed. So depressed, apparently, that it couldn't wait another four or five hours until a regular vet opened. His costuming is pretty overtly broadcasting nuttiness. The warring plaids clash fantastically, the coat is several sizes too small, and the beret has been pulled down all the way to his eyebrows. I also worry about mixing too many neutrals: brown, black, and gray are all good bases for outfits, but don't necessarily coordinate as easily as you might think. He's being presented, effectively, as a clown. 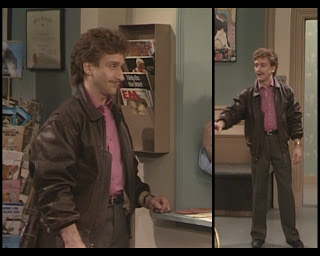 This man brings in an agitated seal. Again, his judgment in using emergency services for what is essentially an interpersonal disagreement is questionable. Would you bring your spouse to the emergency room because of a verbal argument? He's dressed like the gay Indiana Jones. 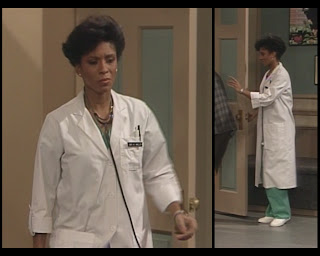 She looks awfully no-nonsense for what is essentially a joke job.

Iona Morris plays the vet. She still appears in TV shows, but her bread and butter seems to be voiceover work, including several long stints voicing various cartoon incarnations of Storm from the X-Men. She's wearing scrubs and a long white coat, like you would if you were a vet. 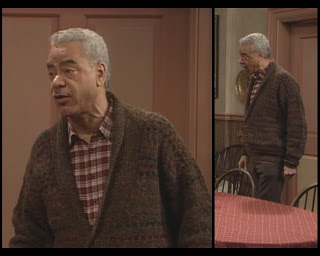 Smallest wardrobe in the show.

Russell appears briefly, and as usual sports repeats: his tragic episode #4.16 cardigan over his #3.14 shirt, plus some dark pants that are too close in shade to the sweater. Not his best effort. 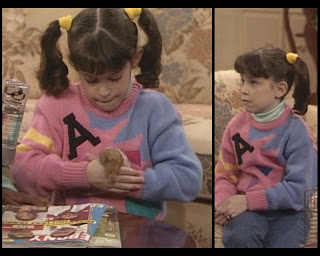 I can't believe neither girl squeezed this animal to death during filming.

Carolyn is sticking with the sort of bright, childlike presentation that Rudy favored last season. As another one of the show's kids who talk like adults, I suppose the younger style is meant to ironically heighten her precocious conversational skills. 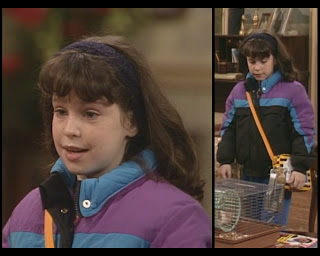 She's all about different ways to hold that hair back.

Her return the following day is brief; there's not even time for her to remove her jacket. Notice, though, that she opted for blue slacks rather than jeans, which is a nice touch. I also love her boxy purse, though I doubt that a girl her age has much to put in it. 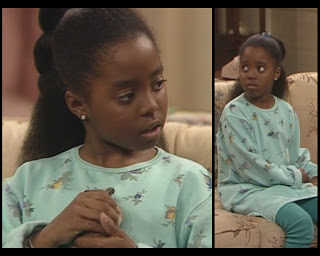 Rudy's first outfit is a little too pajama-y for my tastes. If you're going to throw a baggy shirt over leggings, as the young ones these days are wont to do, you're probably going to want to belt it. And maybe avoid the long, rolled sleeves, which make the sizing of the shirt seem more accidental than intentional. 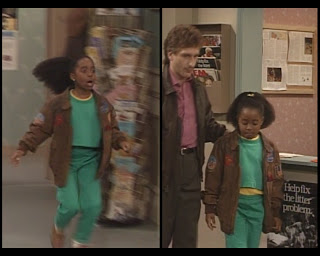 Stay away from the mustahced man. That's advice for LIFE.

Her animal hospital look repeats episode #5.08's top, with the reveal that she owns matching pants. 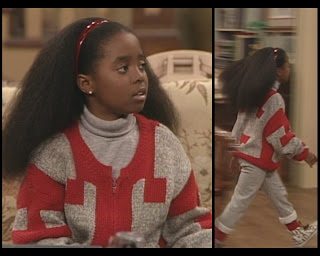 I kind of want those shoes.

She dresses it up a little more for Carolyn's return. The sweatpants (with more rolls, ugh) and turtleneck aren't formal by any means, but that zippered cardigan adds the barest touch of class. The uniformity of hues in this red and gray creation leaves me cold. 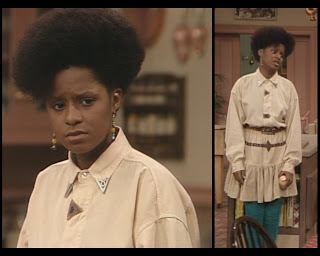 There's potential in Vanessa's outfit for this episode, though it's not fully realized. She's aiming high, interweaving classical influences with detailing from the American Southwest. While it doesn't hang together beautifully for me, there's a beauty in the effort. The main challenge is that it's pretty puffy and busy. If she's adding so much volume in the skirt and sleeves, she could have gone tighter in the torso. The amount of embellishment is also a tad high. But I'm a fan of the palette, with the cream and earth tones transitioning into bold teal leggings. (I've cropped out her yellow socks, as she should have done when getting dressed this morning.) 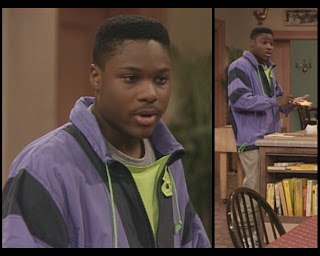 Theo wears this. I have nothing to say about it. 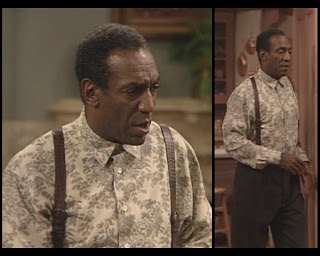 Since Clair appears only in pajamas this week, she will not be present in this entry. We'll move straight to Cliff, who goes in a slightly different direction than usual with his initial presentation. Like his daughter, he's pulling from some antiquated reference points with the added billow to his sleeve, the buttoned top button, and the ornate pattern on his shirt. The leather (is that alligator?) suspenders are just plain fierce. While that pouf at the wrist is a little much for me, I'm overall rather pleased with his delivery here. 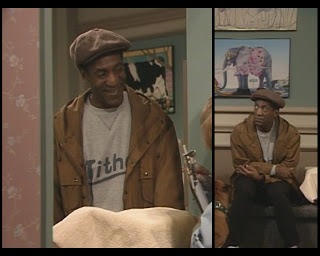 He says he heard the hamster sneeze. NOT AN EMERGENCY.

He wears the same pants to the vet, plus a sweatshirt and the coat and hat we've seen him rock many times before. 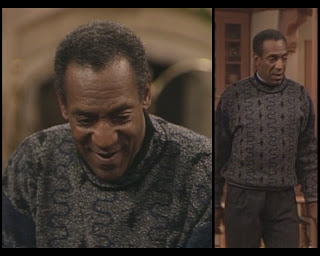 Look at All. Those. Wiggles.

Cliff's final look bores me. There's too much gray, the pattern on the sweater is too dark to emerge from the background, and the mock turtleneck is constructed in a way that makes it look loafy and awful. In fact, much of that sweater looks loafy and awful. This garment, like so many garments on this series, does not fit.

I can't tell you how sad I am to have missed Clair outfits this week. Hopefully there will be a few to throw down next Monday. Bye until then!
Posted by Unknown at 8:00 AM