When Clair finds that she cannot fit into an old dress, she begins a campaign to lose five pounds in six days. Cliff is inexplicably eager to sabotage his wife's efforts, though never for the obvious reason that a crash diet is terribly unhealthy. 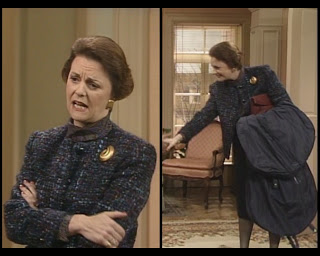 The week's first guest star is Carole Shelley, playing Clair's dress-making friend Barbara. Her entire personality seems to be summed up in the words "stuffy British woman," and her costuming continues with that theme. By dressing her in hose and a below-the-knee skirt, making the clothes out of heavy fabrics, and keeping the color scheme limited to dark variants of the blue family, the wardrobe people maintain her sense of dowdiness. I do commend the pairing of patterned blouse with woven coat, though; there's a power-clashing thing happening there that oddly works. They've found a way to inject style into a not-so-stylish mode of operation. 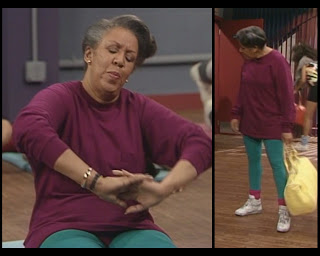 She has the calm of a Zen master.

Clair also meets Kay this week, another exercising woman played by Yvonne Warden. I don't have anything to say about her because workout clothes aren't part of this blog's ever-vaguer mission, but it felt wrong to leave her out, especially since this was her television debut! 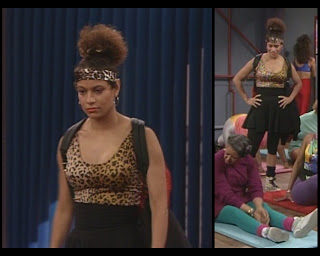 I'm also not necessarily invested in doing a full rundown for Emma, Clair's sadistic aerobics instructor, but it would be wrong to overlook a guest appearance by Phylicia Rashad's own sister, Debbie Allen. She has a couple looks this week, but they're both intended for exercise. Somewhere, the decision was made to include leopard print in all of her looks, which is an interesting touch that I assume is meant to drive home what a fearsome monster she is. No really, the students are all terrified of her, and seemingly with good reason. 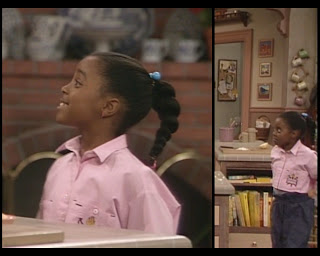 Her torso isn't that small.

The children appear only briefly in this episode, during a single scene in which Cliff cooks a dinner intended to derail Clair's strict diet. Rudy opts for a pink buttoned shirt that would be fine if it weren't cropped, which is becoming kind of a theme for her lately. And what's with the coat of arms on the breast pocket? Ostentatious for someone whose age hasn't hit double digits yet. The pants are from this season's premier. 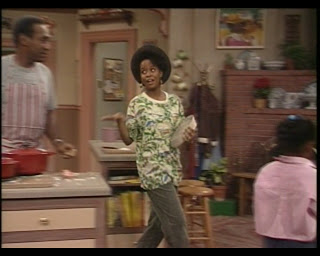 Vanessa doesn't get a close-up, so we only have this to work with. Her shirt is also a repeat from this season's first episode, though it is now untucked and paired with trousers. I shouldn't like the outfit, but somehow the hat ties it together and I actually approve. 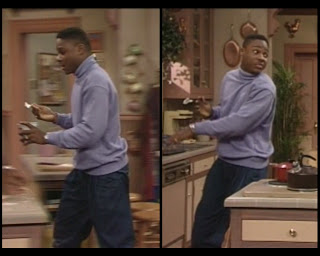 His rat tail will be the death of me.

The lavender of this turtleneck looks great on Theo. If it were tighter, I might not even mind the bagginess of the pants, but there needs to be more contrast between the fit of the two garments for that kind of thing to work. Nonetheless, he comes close to pulling off an actual success here. (If we ignore that tiny beaded ponytail, which we always must.) 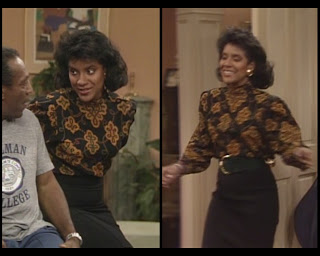 Clair spends almost no time in her first outfit, though in the few minutes it is shown, we learn two things. One: it is perfect. Two: she does not under any circumstances need to lose five pounds! But seriously, look at this impeccable presentation. Her skirt is the absolute ideal for which all other skirts should strive. The blouse makes shoulder pads work. It makes them work! The goldenrod pattern is dazzling yet elegant. And then across her waist, what do I see? A belt in deepest green. Green, mind you. I am in heaven. 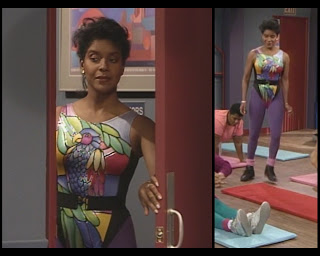 Why is this even available for purchase?

I have nothing to say about this, but I couldn't not show it to you. 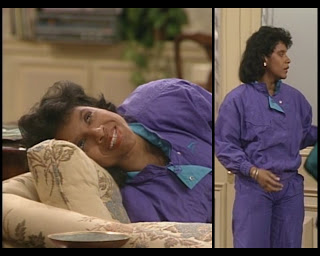 Ditto on this. She has a third outfit for jogging, and I felt that was OK to skip for some reason. 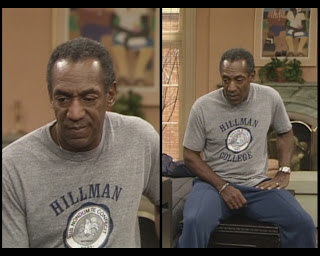 Rather than spoil the surprise of Clair's dress, let's look at Cliff's outfits. First we've got the loungewear section. Any Latin scholars out there want to take a stab at what Hillman College's motto is? 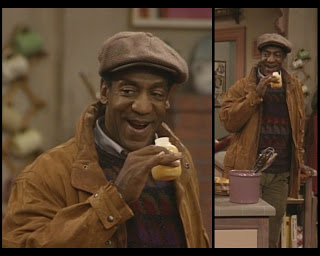 This sweater reminds me of those gummi wedges of candy fruit I used to eat as a child. Was there ever anything more delicious than a gummi orange slice? I certainly couldn't think of anything at the time. (My taste buds are slightly more refined now, but only slightly.) The palette is a little drab for him, though; maybe it's just because I have citrus in my head now, but I would have loved some more vibrant tones to round this out. It's not terrible, but it's not great. 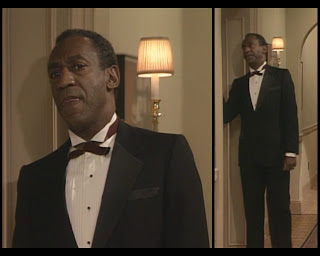 Like the previous sweater, this kente tie lacks the punch we've come to expect from the doctor. A few thinner, bolder stripes would have made this a standout choice. Though you'd expect the somber tones to add formality, they somehow don't. I think this accessory actually looks cheaper when it's more subdued. it somehow needs the fascinating brightness. Otherwise: tuxedo. 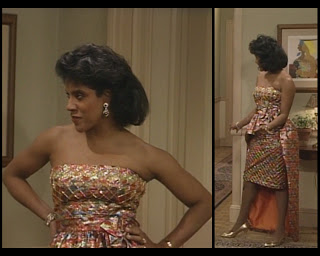 And paired with that tuxedo? This... well, I don't know what this is. I want to adore it, I really, truly do, but I think in my heart of hearts I know that it is gaudy and overwrought. Too many colors, too much shiny rigmarole, too much embellishment, and then a bustled cape because why ever stop? There's just entirely too much going on here. She needs, like, 75 percent less look.

Sorry to have to end on a Clair take-down, which is my least favorite activity. Hopefully next week will be full of fabulous clothes to cheer you back up. Bu-bye!
Posted by Unknown at 8:00 AM