In this two-part episode, Sondra finally delivers her babies. I guess now that Denise's real pregnancy is out of the way, the writers figure they may as well throw aside the fake one, too. That actually helps me out a lot, because now I have fashion to review instead of just the sacks that expectant mothers apparently wore in the '80s.

Here's the thing, though: while this story is divided into two parts, it isn't divided evenly (for my purposes, anyway). Since it all takes place over one day, everyone who shows up in the first segment will be dressed the same next time, meaning that I'd only have a handful of new ground to cover. And there are a bunch of characters, when you include the guest stars. So for today, I'll include the main family and a couple key outsiders; the rest of the cast will be included next week. 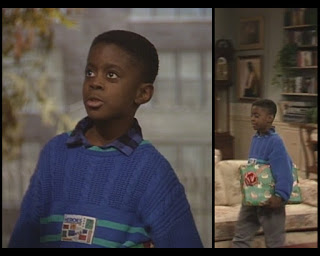 He even wrapped it nicely!

We'll start with Kenny, since he's an easy one: this is his episode #4.12 sweater paired smartly with some gray jeans and not-so-smartly with a plaid shirt that I think is left over from Peter's appearance in #3.10. There's a throwaway gag about the gift he's carrying that I hope will be brought back next week. I mean, don't tell me he's hiding a baby bump now. 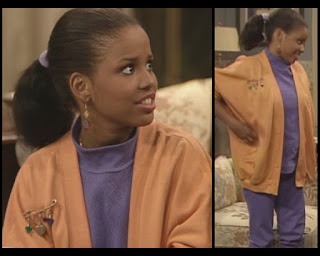 "Pastel" is the opposite of "passion."

Justine has returned, but she's dressed like a sales associate at Chico's. This sweatsuit with that indoor jacket over it, in these colors, plus that brooch... Why not just hire a grandmother to play the role? Theo is possibly going through a Harold & Maude situation in his life. 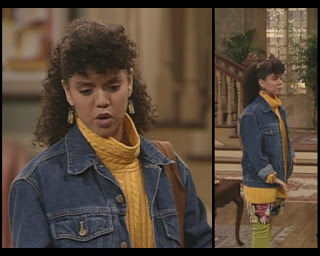 These kids today with their talking and their bip-bop music!

Rapid-fire Kara is also back. I guess the wardrobe department is really running with "loud" as her key character trait, because while this outfit is less overtly atrocious than her last one, it's still pushing it. She's throwing down chartreuse and bright yellow, plus that floral layer. The thick braid and giant turtleneck of her sweater would be overpowering all on their own; I can't imagine what would possess someone to combine this many elements. Shopping with her must be exhausting. 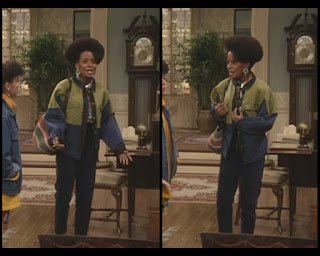 Could we not do a close-up? For me?

Rudy isn't around at all this week, and Vanessa shows up only briefly. I wish I knew what was happening under that jacket, because she's been on a roll lately. I'm hesitant about her pants, which are lacking neatness in their tailoring, but she might have a top to compensate for that. We'll never know. (OK, we might know next week.) The green of her coat is causing me some concern, but it's not unforgivable. 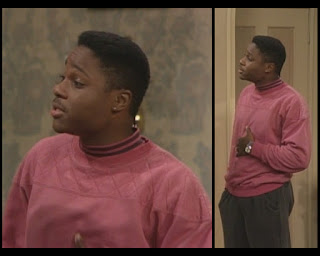 So smug for a man with no style.

We don't see it much, but we should never forget that Theo still has that tiny rat tail with the two beads on it. Never, ever forget. If you do manage to look past that, you might notice his sweatpants, which are an unacceptable form of clothing for public display. I don't absolutely despise the shirt; the shade is great for him, and at least he's trying with that texture across the shoulders and the striped mock turtleneck. It's still practically a sweatshirt, though, and we can do better. 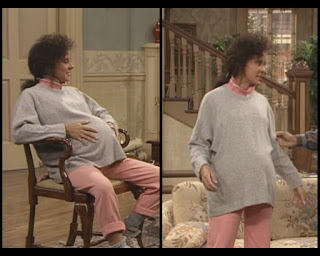 Don't worry, soon you can stop with that padding.

Unless we're pregnant. Sondra is about to give birth, and can thus wear whatever she wants. 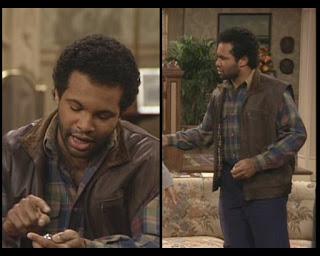 He's all about gender equality and looking totes masc.

Elvin has combined his episode #4.13 shirt with his #4.7 vest and #5.4 pants. Plus stubble for extra wilderness realness. So rugged, right? 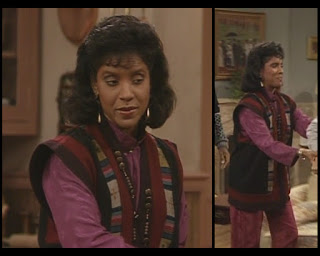 Too youthful to be a mother of five and grandmother of two.

Clair is continuing her Orientalism from last week with a Tibetan (or at least Tibetan-inspired) vest and some mauve-y garments to support it. The complicated patterning on her shirt and pants ends up looking kind of like polka dots and splotches more than skillful detail when viewed from far away, and truthfully I don't know that she's pulling this kind of appropriation off as well as Denise would. I hate to call anything that she does an outright miss, but this feels off to me. I'd encourage her to steer back toward familiar territory. 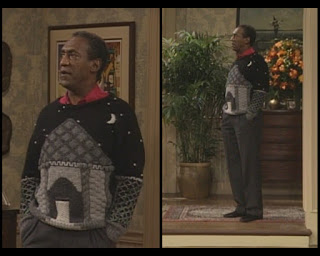 He's indoors. When night hits, this is gonna get uncanny.

And our last participant today is Cliff, wearing a sweater depicting a strangely constructed house. Is it a palace with columns? A larger structure with a dog house in front of it? A residence that has been tented while the owners spray for parasites? The use of his sleeves to show a fence with ivy growing on it was pretty clever. I also enjoy that he kept it simple with gray pants but then used that bright red shirt to add a burst of something new. Congratulations on a good outfit. Oh, and I guess on the grandpa thing, too.

Come back next week and see who else turned up for the birth! (Hint: friggin' everyone. It's crowded around here, which is why Cliff had to make more room on his torso.)
Posted by Unknown at 8:00 AM