Season 5, Episode 5: Out of Brooklyn

Denise petitions her parents for permission to move to Zaire as a photographer's assistant. Meanwhile, Vanessa worries that she has been dumped by her current beau. Does it all work out in the end? Like, duh. 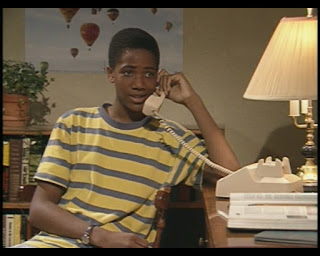 Most definitely not worth sweating, Vanessa.

This is Roy, the man responsible for Vanessa's heartache this week. Turns out it was all a misunderstanding, and he hopes they never break up. He's portrayed by J. August Richards, who you might recognize as Charles Gunn from Angel. He's wearing a gray and yellow t-shirt that's too long, but since he's only in one quick scene at the end of the episode, we don't get more information than that. 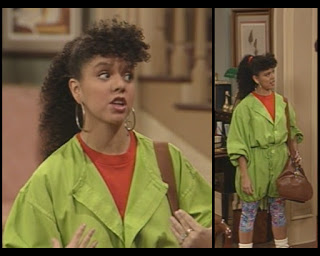 Send help. For me, not her.

Vanessa also gets a new friend this episode. Fast-talking Kara, played by Elizabeth Narvaez, appears seven more times in this series and once on A Different World. In terms of fashion, she's from a different planet. Let's jump straight to that acid green garment, because the t-shirt and floral leggings I at least understand on a conceptual level. But, like, tell me what I'm seeing in this parachute-proportioned button-down shorts coverall creation. Was this a costume worn by a circus dwarf being shot out of a cannon? Other than miniature airborne acrobatics, what other purpose could this item serve? This is one of the most deeply confusing creations ever to appear on this blog. Let us hope that it never returns, as I am not equipped to decipher the riddles it poses. 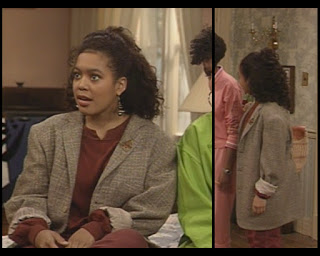 Small business loans of the damned.

Janet Meiser is also back. Normally I'd say that the notch-collar sweatsuit makes her look like she's wearing a Star Trek uniform, but Kara's nonsense outfit nicely protects everyone else from comparisons to otherworldly fashions. Thus, all I can really say is that the rusty top and pants are boring and the blazer is so comically large that it almost reaches her knees. She's practically swimming in it. How does she not understand that it just plain doesn't fit? No, honey. No. 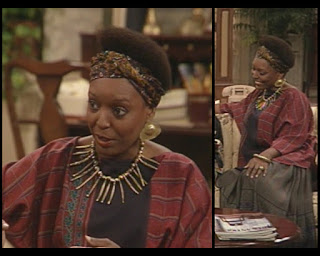 She has seen and photographed pygmies. What you got?

Our last guest star is L. Scott Caldwell, who plays Elizabeth, the photographer that Denise will be assisting. Be careful on that plane ride, ladies: Ms. Caldwell is best known for her role as Rose on Lost. Her style is definitely meant to seem bohemian and international: the loose, patterned garments, head wrap, and unique jewelry all point to a fashion perspective informed by her years of exposure to non-Western sensibilities. The horizontal stripes are cohesive and the palette is sensible without being boring. Plus, she's probably super comfortable. Good for you, Elizabeth. 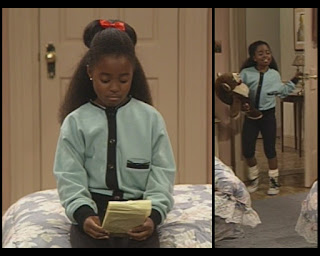 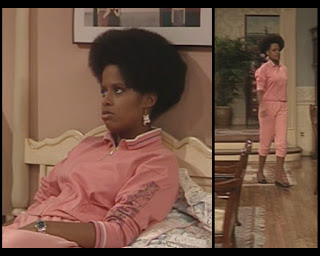 I'm almost never going to support someone wearing just one color. You'd have to be exceptionally deft to pull it off, and Vanessa just isn't. The proportions here are great, honestly: I love the length of the pant, the rolled-up sleeves, and the overall fit of her clothes. But she needs a contrasting color other than the weird patterning on her top and the stripes at her collar and cuff. By wearing darker capris, she could have gotten away with less fuss elsewhere, which would have made everything a million times better. 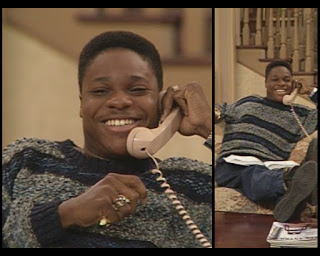 Awfully cocky for a man in his dad's duds. Since Denise is still pregnant, we're stuck with her floral shrouds. This particular pattern looks strikingly familiar to me, but I can't find an instance in which someone else on the show has worn it. Regardless, I'm looking forward to her fashion choices after the off-screen baby is born. 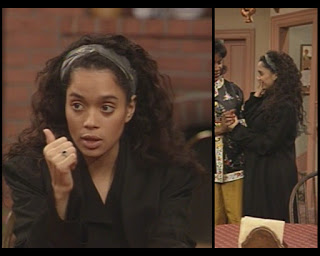 For some reason, she changes into funeral gear for the final scene. This is after Elizabeth has left the house, so she's not dressed up for the guest. Is this a travel look? Is she leaving for Africa immediately after the conversation with her parents is over? It makes no sense. Though I will say that she looks sort of darkly fabulous here. I'll accept it. 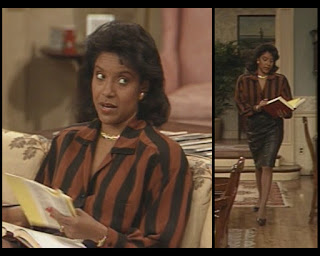 Clair starts the day off in her episode #4.2 skirt. I'm so glad she brought it back, because it's such a gutsy garment. Office leather is the best leather. Her broad-striped blouse is fine, though the shoulder pads are pretty extreme and the palette could be a little catchier. 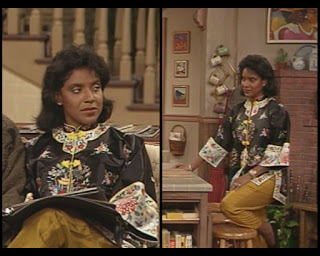 When Elizabeth comes to visit, she changes into this. I suppose she didn't want to be outdone by her guest's international flair. She's all, "Oh, I have global tastes, too. Look at this Japanophilia nonsense." You did not buy this outside of Brooklyn, I'm positive. It just seems costumey. If she had matched those golden pants with a different patterned black blouse, she'd be in much better territory. 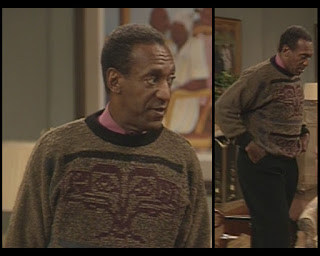 Cliff's sweater is maybe a tree, but a tree with eyes? Or perhaps a butterfly? This is some Rorschach realness right here. I'm pretty bored by his color choices other than that sweet mauve collar.

And that's that. Denise is off to Zaire for the entire rest of the season, which means I'm going to have to tolerate Sondra a lot more frequently. Lord give me strength.
Posted by Unknown at 8:00 AM