I'm sorry to have to do this to you, darlings, but it's a Rudy episode this week. They're always the dullest, because let's be honest, so few things happen to people below the age of 16, especially when those people are members of wealthy sitcom families. Tonight, she's having a sleepover. Elsewhere in the house, Theo is rewriting a paper on which he received a poor grade. Like, literally, the B-plot is "watch someone do homework." It's pretty dire. 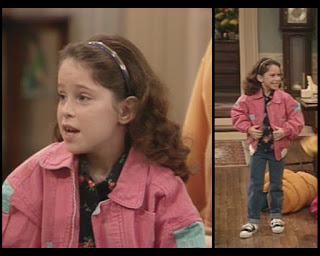 The friend staying the night is named Carolyn. If you're like me (and by that, I mean addicted to gay movies), then you recognize young actress Grace Johnston as Barbara Hershey's daughter in Beaches. Her career never really took off, though she did appear in an episode if The Closer in 2009. The gimmick she's saddled with is an old favorite for the show's writers: she's a child who talks like an adult. In terms of style, however, she's pretty standard: black sneakers, cuffed jeans, patterned blouse. I guess there's something a little matronly about that dark print, but it's tough to tell under the pastel tent of that jacket, which she does not remove. The salon-level hair is, I suppose, another indicator that she's a fancy little lady. 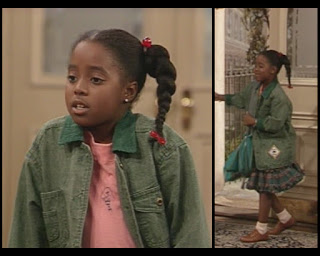 Not a girl, not yet a woman. OK, kind of still a girl.

Rudy's costuming continues to convey maturity through its evolving palette. Though she pulls in some of the pastel pink of childhood, she pairs it with a mossy coat and subtler plaid skirt. The volume on the bottom is great for me, though I have less affection for the patch on her coat pocket (distracting) or the small black emblem in the middle of her chest (confusing). I suppose if I could see the rest of the shirt, that doodle might connect to other embellishments. Or maybe if I knew what it was a drawing of? Eh. Point is: solid look. 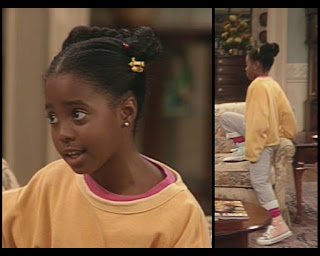 Her second outfit is a little more childish, which I guess is to make sure that she's juxtaposed appropriately with her grand dame of a guest. She's not wearing two different colored shoes, by the way: each shoe is itself two colors, but they match. Or mirror each other, really. The pink and yellow work for her alright, but really I don't want to dignify this with too much attention, as it is a sweatsuit. 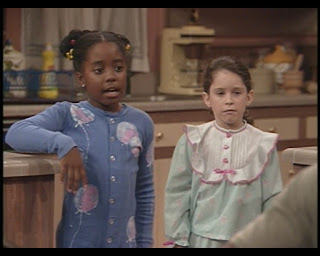 The girls also both wear pajamas in this episode. Presented without comment. 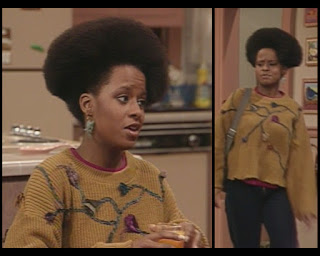 She's a grown woman, she can do whatever she wants.

Stepping up our game, are we? This is lining up to be Vanessa's season. She's got a stately confidence about her that sells whatever she chooses to wear. This look is the kind of thing that would be relevant today because it was relevant when she wore it. Like, you'd pick up this sweater second-hand and it wouldn't fit right because it's someone else's, but that'd be OK because those textured flowers are kind of great and the dirty-looking ochre power-clashes with the magenta undershirt, and then you'd bounce into the party with those tops and your perfect dark denim to support it and everyone would be way into it. So this is a yes. 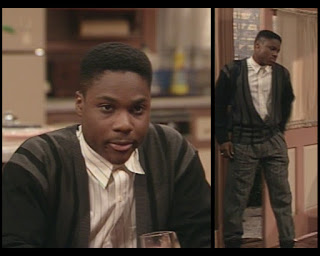 I feel like I should praise this, but it's not happening.

Theo is trying for the college man thing by wearing more formal items as if they were casual. Pleated slacks, shirt buttoned all the way up, nice cardigan, and all in shades of gray. It's not a terrible creation. I'll give him the benefit of the doubt and assume that the droopy fit of these pieces is intentional, so as to convey that he's not "dressed up." On the other hand, I'm bored by the use of three tonally similar striped patterns. This is begging for an accent shade. 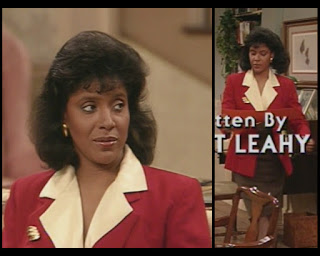 Nobody does it better.

Sorry for the credits over that shot, but Clair spends almost no time standing in this outfit. She owns many red blazers, though this one seems to be different from all the others. When something works for you, stick with it, I guess. The use of cream and brown to support that jacket is just right, and as usual she knows how to shape things to complement her own shape. Go to work, lady. 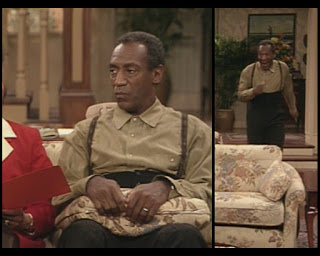 He tests my comprehension frequently.

Cliff begins the episode in a garment that I can't quite grasp. As you can see, the black fabric extends clean up to his rib cage. What I can't discern is whether that's a separate cummerbund or a part of the pants themselves. Either way, in the closer shot we learn that there are buttons all the way up, because if it's weird, it might as well also be fussy. I'm fond of that golden shirt, but I really don't know what to make of the corsetry around his midsection. 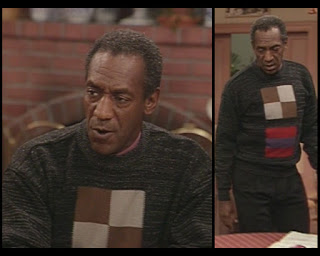 A brief break before the madness continues.

His second sweater (with the same or similar black pants) has a weird feel. It's Yoshi's Cookie or semaphore writing or flags for imaginary countries, presented over TV static. Inoffensive, only slightly strange, not quite chic. 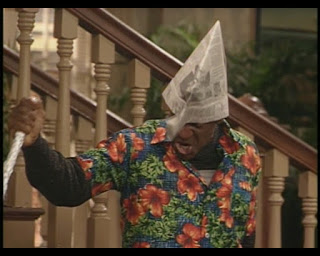 Later he portrays a pirate by putting his episode #4.20 vacation shirt over his existing outfit. Neither his hat nor his Hawaiian print seem even vaguely piratey to me. This family usually has much higher standards when playing dress-up. 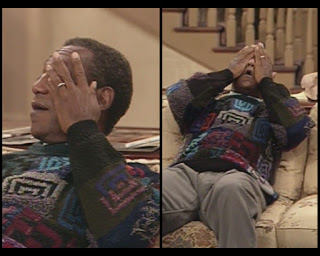 And back to madness.

It's a shame we don't get more of this sweater, since it's the most Cosby of the trio. It's serving variations on a theme more than an outright pattern, repeating the same image of concentric squares rendered in a variety of different colors and textures. The effect is mind-bending; I approve. 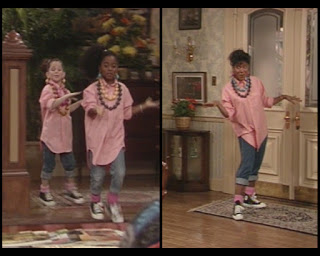 Speaking of Huxtable cosplay, I had to save this for last: Clair and the girls end the episode by wearing matching outfits (and personalities) to the mall. Pink looks great on everyone, huh? This look wouldn't carry you far today, but it's clearly meant to be an exaggeration of the styles of the time, so it's not fair to look at this as an honest attempt at fashion. How awesome a mom is she for orchestrating this? So awesome. (It's specified that this is her jewelry, and I'm a little concerned that she had this many giant necklaces in varied colors, but I'm going to trust that she can make them work in other contexts.)

That last shot is seriously the only reason to watch this episode, by the way. And on that note: see you next week.
Posted by Unknown at 8:00 AM