Cliff's bad eating habits are once again the center of attention this week. The family joins together to mock and shame him as he works to cleanse his body before his physical exam. Of course, every story needs a good moral, so he still gets told to cut down on the hoagies and chocolate sodas even though he did his best to fool the blood tests. (Wait, is chocolate soda a real thing? Can I be drinking that?) Meanwhile, directionless Denise gets fired from her job as a receptionist, but scores a gig waiting tables at a pizza place. 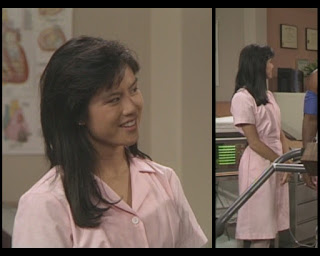 This is a uniform, but it could almost work as just a dress. Almost.

Sari Chang plays Nurse Young, who is there to help with Cliff's surprisingly rigorous physical examination. She doesn't have much in the way of a costume or career history, but I didn't want to leave her out. 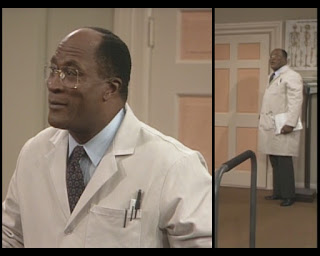 He'll always be the Golden Arcs guy to me.

Cliff's doctor also has nothing exciting in the way of attire, but he's played by John Amos. This man has been in everything from Good Times to Roots to Coming to America to The West Wing. Still, he's wearing gray slacks, a blue shirt, and a tie. There's nothing really to say. 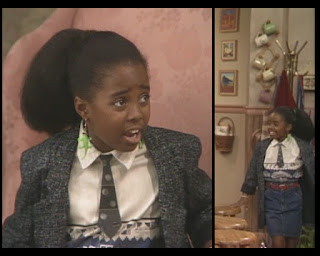 Continuing her foray into adult-ish duds, Rudy offers up a blouse, skirt, blazer, and tie. There's a lot of business happening: the southwestern print, the narrow red belt, the static-y pattern on her jacket, the neon lizard earrings. Most innovative is the tie, which has full-on holes instead of polka dots. (It also has stripes, and for future reference one pattern is typically enough.) I think the white-on-denim base works, but beyond that she's overreaching. Instead of slamming on the gas, she should probably have made the transition into big girl clothes more gradually so as to avoid this kind of whiplash. 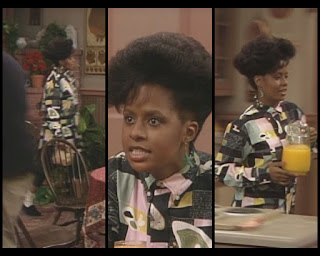 I ignored the socks intentionally. You should, too.

Vanessa is following in her mother's footsteps with the tunic-over-leggings game. Tunic-style, anyway. This overlarge button-down is noisy in a way that doesn't really resonate with me, but I see what she's aiming for. It's at least cohesive in its palette, even if it's not my cup of tea. (Glass of juice.) 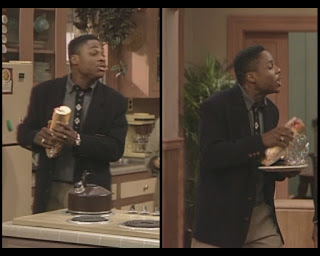 Every week, I hope. Seldom am I rewarded.

There's a serious Izod vibe coming off of Theo's outfit. The khaki pants and olive polo get us most of the way there, but it's the argyle down the front that really seals the deal. His jacket, while not particularly stylish, does a great job of covering the other non-stylish parts of his wardrobe. 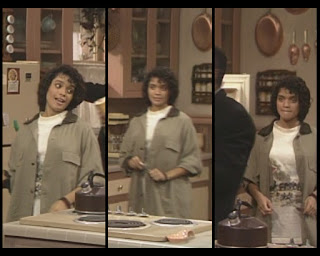 Turns out we can't count on her this season, after all.

As a helpful reader pointed out in the comments section of the last episode: Lisa Bonet is pregnant! To hide this fact, we're apparently going to drape her in giant t-shirts and coats. Sad news. 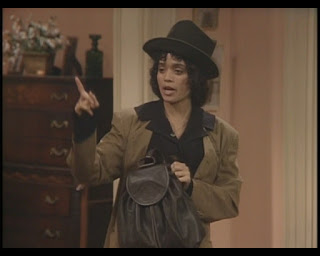 That finger lets you know that she's making a real point.

Also: bags. And even hats that are too big! Make everything huge to minimize her baby bump! 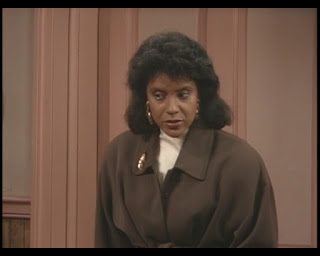 Clair comes downstairs already wearing a coat, thus effectively masking whatever she had on underneath. Was there not a budget for a work outfit for her? Could we not have repeated something? This is just a sack with a sash belt. 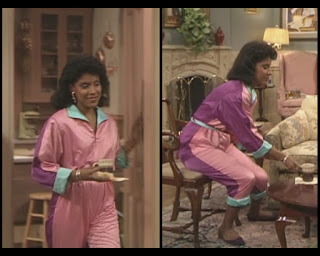 Can we get that sack back? Honestly, what the synthetic hell is this? I'm appalled. 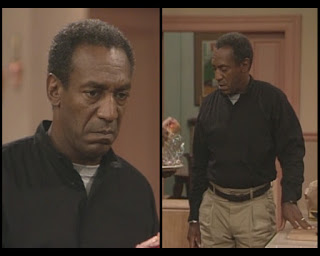 Why is no one helping me out this week?

Cliff rocks a black shirt and khaki pants. Snooze. The nehru-ish collar is bordering on interesting, but overall there's really nothing to see here. 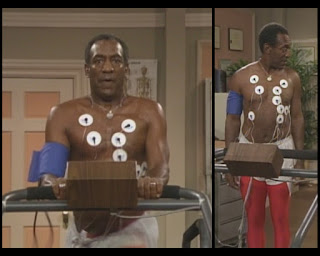 We'll end with a shirtless Cliff covered in electrodes, simply because it's hilarious.

I trust you all had a fabulous long weekend. Hopefully, you're not bothered that I took yesterday off and posted this entry today. Even bloggers need breaks.
Posted by Unknown at 8:00 AM