The prom is coming up, and Theo and his friends want to arrive in style. When a limo turns out not to be impressive enough by their standards, they opt for a helicopter instead. It does not go well. Back at home, Vanessa and Rudy help Cliff throw a prom for Clair to make up for the fact that finals prevented him from taking her to the dance when they were younger. 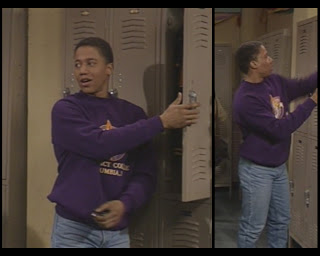 Teenage boys, always checking to see who has the bigger... limo.

Gerald makes another appearance as the show's semi-antagonist. This time, he's there to brag about how his limo is the biggest and best. I'm not blaming him for the helicopter incident: there's no need to make everything into a pissing contest, and it's Theo's fault for rising to the bait. I am, however, blaming him for wearing a purple sweatshirt in public. Dismissed. 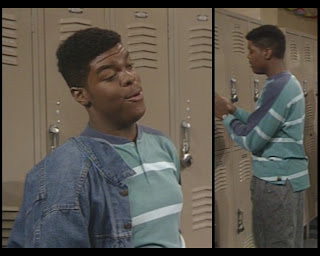 He needs someone else to choose his outfits from now on.

Denny returns as part of Theo's post-Cockroach entourage. He looks a mess in this getup. The tones are all too muted, nothing fits, the un-collar of his shirt bothers me for a non-specific reason, and acid-washed denim is a cultural mistake about which we should all be ashamed. 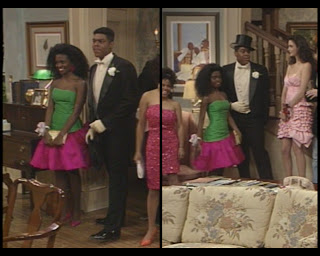 I nominate his date as future clothes-chooser.

He cleans up nice, though. The tux is sharp, and he gets extra points for pushing the envelope with a white tie, white gloves, and a top hat. 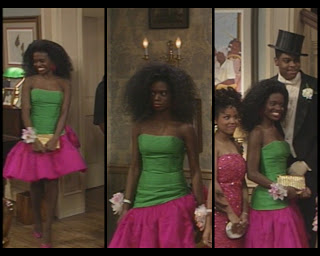 Not impressed by the helicopter.

His date, Sylvia, is played by Broadway actress LaChanze. She makes her television debut here, and has made a few on-screen appearances here and there, but is mostly known for starring in musicals like Once Upon This Island and The Color Purple, for which she won a Tony. (That shot of her in the center is post-helicopter, and I can't get enough of how furious she looks.) This dress is solid; I like the slight asymmetry and the playful shape. The skirt length and bare shoulders feel flirty without getting inappropriate. It would have been nice for her to tweak one or both of these colors. The grass green could be brighter, or maybe that fuchsia could be punched up a little. If you're going to wear a loud dress, you may as well go all the way loud. 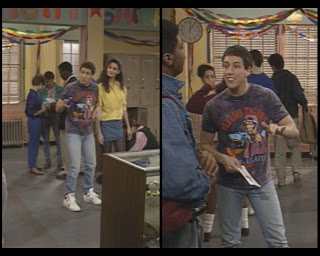 I'm pretty sure he does no falsetto singing at any point during the series.

It's still weird to me that Adam Sandler got his start on this show. He's back as Smitty, the goofy one. Accentuating his goofiness: those mom jeans, that raggedy t-shirt, and those too-white hi-tops. 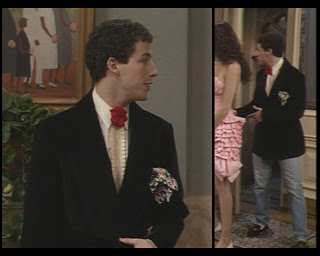 He looks like he's about to bomb at an open mic night.

OK, now we're just trying too hard with the "personality" thing. Jeans and a velvet jacket with a tuxedo shirt from, what, the 1800s? And the flower instead of a tie? It's all so forcibly zany that I barely even register the fact that his pocket is vomiting. 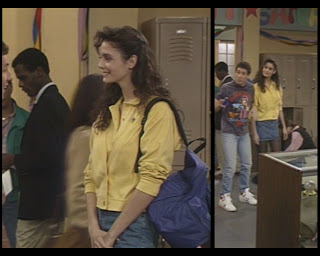 He manages to land a date with Roxanne, who is played by six-foot-tall legit model Stacey Williams. In addition to small appearances on film (for instance as a former girlfriend in Jerry Maguire), she has done print work in places like the Sports Illustrated Swimsuit Edition. I thought she was serving a pretty bland outfit initially, just a yellow sweatery/blousy thing (let's call it a cardishirt) and a denim skirt, but then I realized in the long shot that she's wearing black panty hose. That's a bold look for daytime at any age, but particularly in the halls of your high school. Dang, girl. 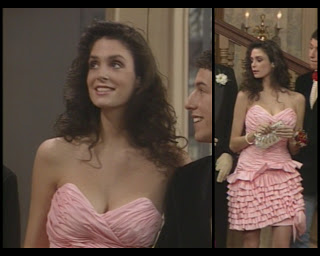 Her prom dress is a candy confection and I mostly adore it. I don't know that it absolutely needs to be diagonal at the bottom, given that the incline is so slight anyway. Plus, there's a weird fabric polyp down in the corner, and if leveling those ruffles would prevent that, then I'm especially eager to implement such a fix. But the color is wonderful, the all-over texture is divine, and she's a princess tonight. Smitty is never going to have it this good again. 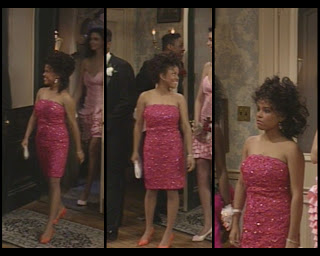 I wouldn't have gone out with him again after this. She's a champ.

The last of the prom dates is Michelle Thomas in her first appearance as Theo's long-time girlfriend Justine. The two actually dated in real life after this, and he was at her bedside when she passed away from cancer at only 29. She is best remembered for this part and her subsequent performances as Steve Urkel's girlfriend on Family Matters. I'm liking the overall cut and color of this dress, though there's a slight fit problem happening in the chest that's making her shape a little awkward. But she has a great Diana Ross and the Supremes vibe, and earns a million bonus points for picking orange shoes. It shouldn't work, but it does. It works so hard. 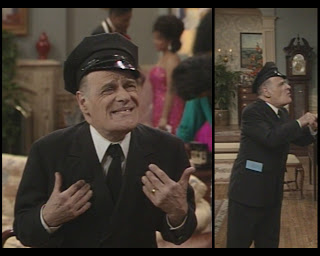 Robert Weil appears briefly as the limo driver. You might remember him from Moonstruck  or Saturday Night Fever, but probably not. He's wearing a uniform, so let's just keep moving ahead. We've still got a whole regular cast to get through! 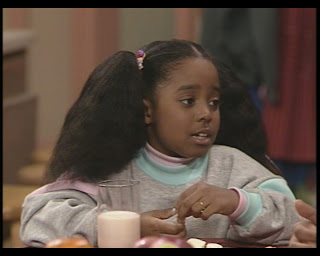 She's wearing a tiny ring. Are she and Kenny engaged?

Rudy's first scene happens at the kitchen table, so this is all we see. Banded sweatshirt over a pastel turtleneck. Mainly this is interesting because her hair is almost always braided, meaning that I completely underestimated how much of it there actually is. Those pigtails are long and voluminous. I was unaware. 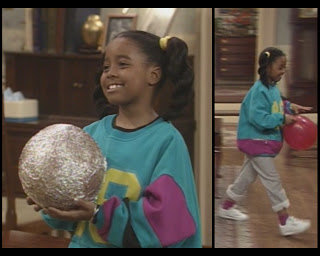 Don't make her wear round clothes and hold round things. Rude.

More sweats, this time in brighter colors, plus a number 88 to let you know that she's on a sports team of some sort. Perhaps a league of spherical children? Really, get her one shirt that fits. One. For me. 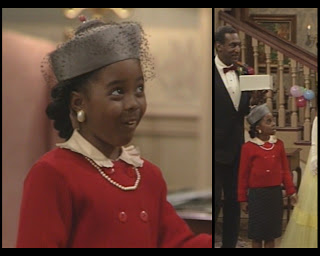 Those had better be fake pearls.

For the restaged prom, Rudy and Vanessa dress up like period-appropriate chaperones. You know how you can tell a family is rich? When they have tons of fancy costumes for their kids just lying around. Like, who has the budget to buy tiny, classic hats that will only be worn if their child decides to do something inexplicable like throw a retro party? It' makes no sense. I love that little lightly patterned skirt, though; that's a good formal piece for any old time. While her red coat is a good vintage find, it's another one that will probably spend the rest of its life unseen in a closet. 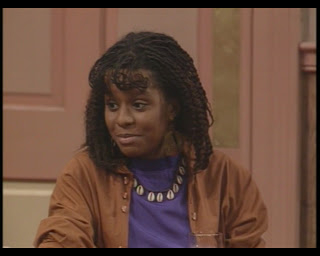 Maybe it's better from the ribs down.

Vanessa is also seated at the kitchen table for the first segment, so we're left with this. I'm guessing by the thick band at the neck that this is her episode #4.20 purple top, with a rust button-up shirt over it. Eh. (Also: were shell necklaces associated with dudes you should definitely not date when this episode aired?) 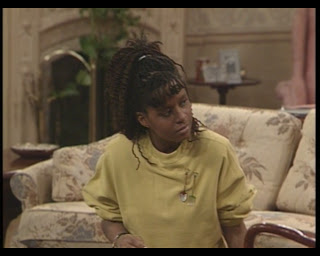 I dig that brooch. Get it?!

Her second scene also happens mostly behind a table, and when she finally stands up to leave, she carries a gigantic sign. If we hadn't seen her legs in the third segment, I'd have begun to worry that there was a problem of some sort. This murky yellow isn't so hot for me. It's not that it looks bad on her specifically; more that it looks bad in general. It reminds me of mustard that has gone bad. She attempts to spice it up by opting for pins that are shovels. Just shovels. It's a decision. 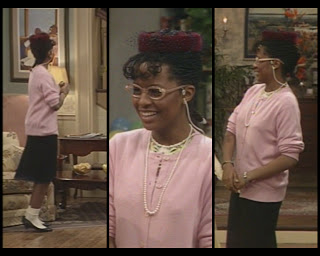 She should wear more baby pink.

More costumes! She even has fake glasses lying around! And another hat! I guess Cliff could have taken the girls to buy these pieces when they went shopping for party supplies, which explains why he wasn't around to dissuade Theo from renting a helicopter. 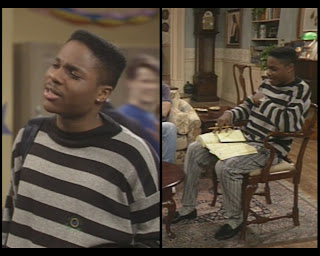 Theo starts the show in an imagined collaboration between Tommy Hilfiger and Tim Burton. So many black and gray stripes! Any second now, he'll be starring in a movie in which a misunderstood hero finds love with a daft but warm-hearted woman while Danny Elfman music plays. In terms of fashion, nothing is going particularly well for him, but the loafers are somehow the most offensive to me. 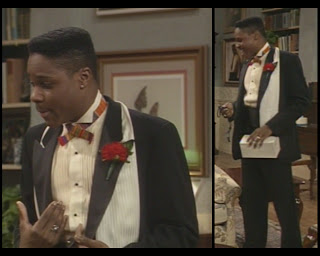 Can't go wrong with one of these babies.

At least the tux is deluxe, and he's keeping with the family tradition of that kente tie. Though I wish the white scarf matched the off-white shirt. 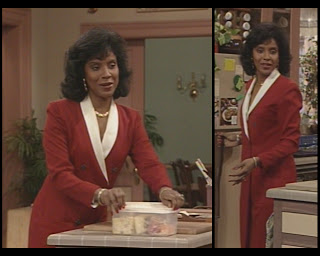 A goddess even when handling Tupperwear.

We don't see enough of Clair's first dress, but from what I can gather from its short screen time, it's delightful. My favorite part is the bit of white lining inside the sleeve. That kind of attention to detail is what really makes a garment shine. The presentation is simple but impeccable. 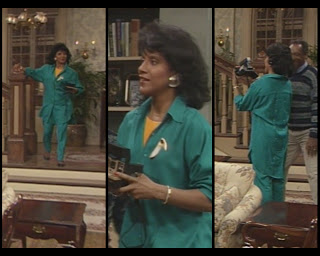 A plague on the vestments that besmirch her loveliness!

She allows her standards to slip for her second look, however. I can support the aquamarine, but the pajama-y tailoring works against her, particularly this tent of a shirt. Look at how it destroys her silhouette in the first panel: her torso is broadened, her legs are shortened, and her arms become doughy nubs. Other than the detailing going down the back, this gives us little to really look at. She's as flat and square as a paint chip at the hardware store. Not good. 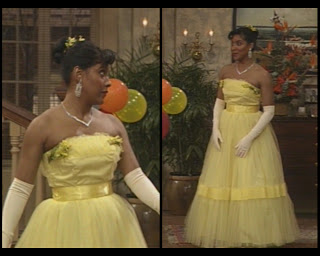 Cliff claims that this is her original prom dress, which he had altered. That makes no sense. First off, she wasn't planning on going to prom, so why did she buy a dress? And since she didn't attend the dance, why save the dress she didn't get to wear? And was there really enough extra fabric to seamlessly expand the whole creation? Oh, and while we're talking about inconsistencies, this version of the timeline is continuing with the revised history in which Clair went to school after Cliff because she is younger than him, even though they used to be the same age and went to college at the same time.

Ignoring all that nonsense, she looks friggin' adorable. 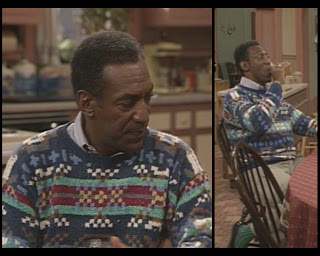 Now the Mario Bros. theme song is stuck in my head.

It could very well just be a knitting technique, but I can't help but feel as though Cliff's first sweater is partially inspired by pixelated art in video games. This is like a Christmas sweater as viewed on a Nintendo. Also, check out the khaki cargos and green striped socks. Because tomorrow... 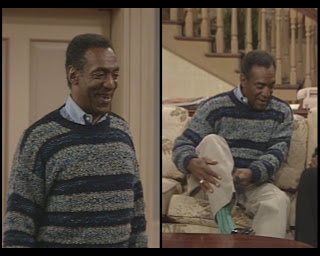 The headache has moved to my knitwear.

...he wears them again! This time, his sweater says "tv static" to me, which sort of continues the technology theme. 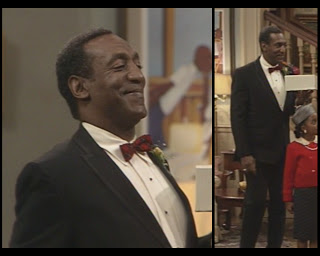 He has a retro tuxedo just in case, I guess.

And lastly, he pulls out the prom tuxedo. Note that since he is portraying a teenage version of himself, he opts for the simple bow tie, and not the crossover he apparently adopted in later years.

Well, that was a lot. Proms are exhausting, huh? And I didn't even think to save what I wore. Then again, I rented my tux. And it was really ugly.
Posted by Unknown at 8:00 AM