Season 4, Episode 21: Home for the Weekend

You guys: Denise is back for a visit. The whole family is excited to see her (as am I, make no mistake), but resentment builds when she spends so much time visiting old friends. Look, she's popular. Deal with it. Her return to the show on an episode with a three-day arc means that there's a lot of ground to cover, including a few really stunning contributions from Denise. Let's get down to business. 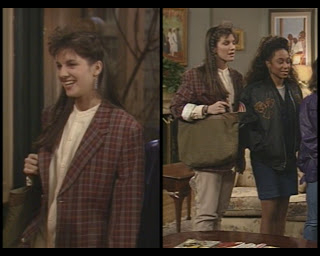 Susan Diol returns as Cheryl, giving a little continuity to this "visiting old friends" scenario. She's got a decent thing going. You can see her paving the way for the next decade: that structured plaid blazer will be refined into a brighter, more fitted variant that will pop up in iconic portrayals of '90s fashion like Clueless. Other than the one big impact of the jacket, she's keeping it plain with the light, collarless blouse and slim khaki trousers. It's not as dated as it could be, and I appreciate how her choices show obvious relevance to future styles. The rolled sleeves and hairstyle really hold her back, though. And the tailoring, obviously. 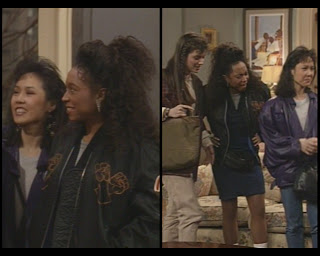 A second, nameless friend is played by Wynonna Smith. Her credits include two appearances on A Different World as Lorna (no idea if that's a different character or not) and one of the Ikettes in What's Love Got to Do with It. Her jacket is the main focus here, and I'll agree with the choice to rock a giant black bomber. The patches confuse me, but whatever. Underneath, I can't tell if that's a dress or overalls or a skirt and separate top, but I can't imagine that any of those possibilities would make this into something that I liked. She shortens her legs with those socks hiked halfway up her calves and the ghastly fanny pack that lowers her waist. Wrong call. Proportions are important, people! 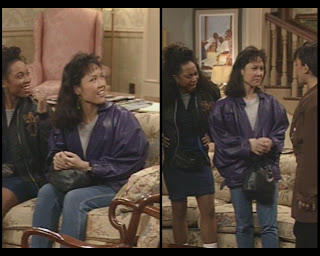 Nina Zoie Lam (who wasn't using the "Nina" yet professionally at this point) makes her TV debut in this role. Her IMDb page only lists a couple other credits. Like the other two ladies, she's relying almost entirely on the jacket with her outfit. Then again, when you have a leather coat this big and purple, I'm sure it's tough to find pieces that coordinate. The cut of her sleeve gives her total tyrannosaurus arm, though. There's so much shoulder pad and loose sag that you just can't figure out where anything is, and it ends up making her torso into this crazy jumble. Beyond that, it's jeans and a t-shirt. Can't say much about those. 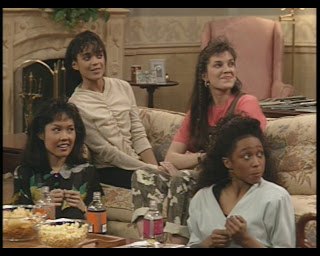 They all show up again later, but we basically only see shoulders and no one cares about any of these shirts anyway, right? Don't look too closely at Denise, we're getting to her later. 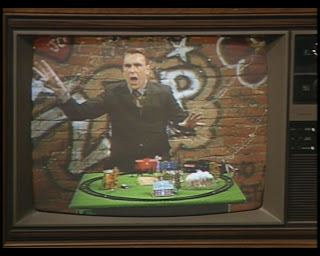 And now he guest stars on Girls, which feels equally as random.

Oh, and by the way: the man they're watching on TV, Davey Herbeck, is played by Colin Quinn in his third-ever acting credit. He actually does rather well at convincingly selling the alternative comedian act even though the script doesn't support him much in that endeavor. Grainy footage of grainy footage gives me almost nothing to go on in terms of fashion review, though, so I won't bother. 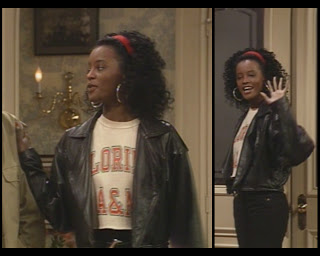 She's waving goodbye because we'll never hear from her again.

Though she's not listed on the IMDb, this woman is credited at the end of the episode as Belinda Sawyer. She's Theo's date, who is singled out by Denise and her friends for being highly attractive. I'm not sure if she's going for a badass vibe with the mostly black, leather jacket, cutoff tee situation, but it kind of works for me. It shouldn't; it reads like a costume. But I dig it. The hoops are a little big. OK, a lot big. 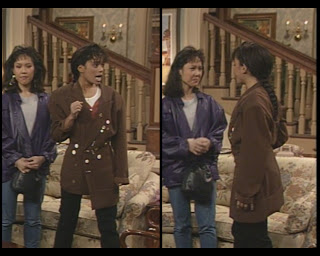 Obviously, the guest star we all care about is Denise, and she knocks it out of the park with all three of her looks. Her first presentation is this masterpiece. Her friends are all like, "On Fridays, we wear coats," and she's all, "watch and learn, amateurs." She's petite, and could easily get lost in an oversized garment, but the cinched waist and slim pants give you a sense of her true proportions, so the ridiculous shoulders end up being OK. The asymmetrical tailoring is absolutely spectacular, and the pins I'll allow because everything else is working so well. 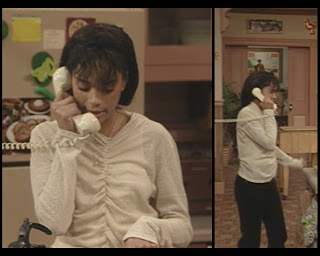 The world is dark when you are gone.

These may or may not be the same black pants. Doesn't matter. How beautiful is this shirt? The lacey material and ruching give it some elegance, and yet it feels casual enough to be worn with jeans. I'm fully in love with it. 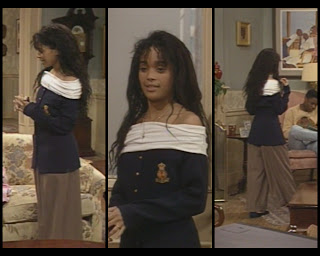 You know what? I'm not even going to tarnish this with my inferior commentary. I'm just going to look at it forever because it is unbelievable. This is the outfit, everyone. THE outfit. Please join me in simply staring in awe. 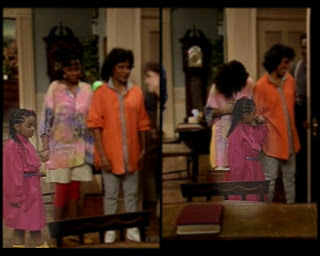 Ignore everyone else and just look at Rudy, OK? Her first outfit barely registers, but it's my job to highlight it. ("Job.") So, we've given up on buying her clothes that fit, it seems. We're just going to accept that for the next year, she'll be swimming in everything, and then eventually it'll fit for like a day, and then it'll be too small and she'll just deal. By the fifth kid, I guess you're all about practicality. Also, remember when Vanessa was all over purple belts for a while? That runs in the family maybe. 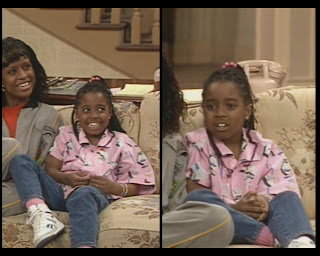 This is a little better. Not great, but better. I mean, that shirt is too big, but an adult might wear it that big, too. 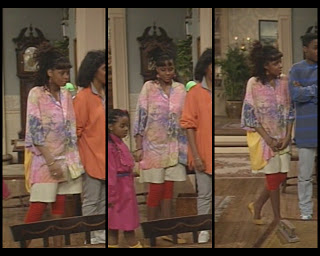 Please don't do this to me.

We actually get four outfits from Vanessa this week, with varying levels of success. Her biggest fail is this first one, which: what? What is she doing? Like, gigantic shirt over gigantic shorts, and then capri-length leggings? And, like, pastels and khaki then bright red all of a sudden? I'm understanding none of this. This should not have happened. 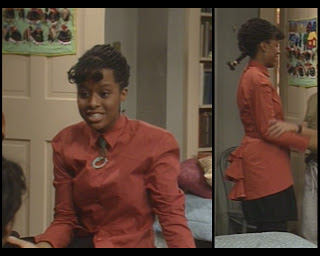 And then this! Just right. That dark coral, ultra-structured Victorian blouse is so, so chic. Having a distinct point of view is important, as is precise tailoring, and both of them are displayed in full effect here. The bustle ruffles? Come on. You can't see it well, but underneath, she's rocking a short, rigid skirt and then another set of capri-length leggings. However, they fit much better here, juxtaposing the modern and causal with the old-school formal in a way that delights me. And she's misguidedly wearing this to go shopping for a new dress for a party, when really this is exactly what she should be wearing to go out because it is undeniably fabulous. 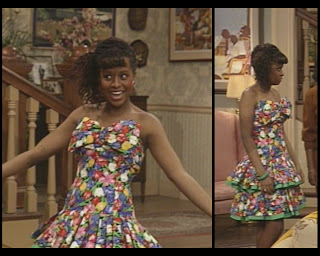 Sadly, she ends up with this nightmare instead. How does the girl who chose that top also choose this thing? The floral is cloying, the double hemline is regrettable, the humongous bow is outright stupid... I can't say "no" loudly enough. 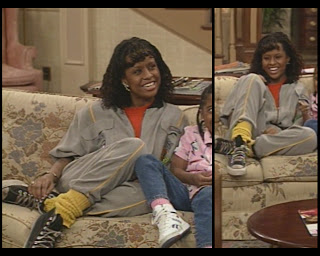 And now things get easy for me.

Her final outfit is a reprise of her episode #4.11 jumpsuit. 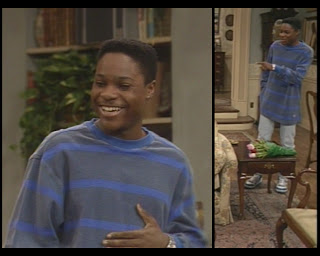 This is Theo's episode #4.4 shirt. It looks better here with the lighter jeans, though the length is still completely unacceptable. 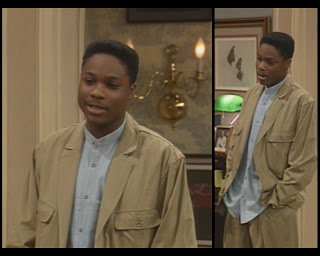 Look, they used all the budget for new items on Denise, OK?

Theo first wore this jacket (with a different nehru shirt underneath) in episode #3.25 when the family sent Denise off to college. I dislike it with matching khaki pants. It's way too sloppy to fit as part of a suit. If you're going for that look, you're going to want to find fitted pieces and tuck your shirt in, for heaven's sake. 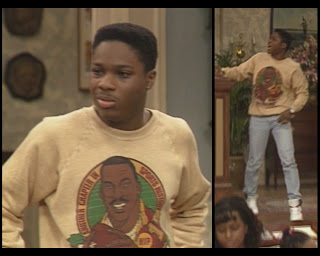 I guess they had fifty cents left over for this top.

Anyone know who that is on his sweatshirt? This is another example of Theo's proto-hipster stylings. It wasn't ironic when he was wearing it. 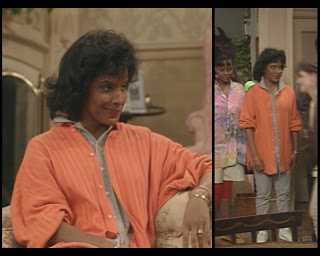 I could do a whole separate blog about the looks she gives people.

Clair has opted for solid colors under a contrasting cardigan a few times, so this is just a variation on a usual lounging-at-home theme. The palette she's chosen here isn't her most successful; often, she's bolder in her selections, pairing two jewel tones and avoiding neutrals. The gray and creamsicle are fine, but not outstanding. 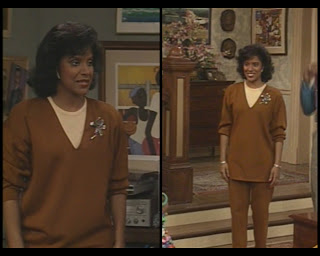 Making her this plain is a crime.

Last time Clair wore this, in episode #4.8, she had a much more vibrant shirt on underneath, and flashier jewelry. Those additions helped a lot. These medium brown pieces are exceptionally plain, and without flashier accessories, she fades away. 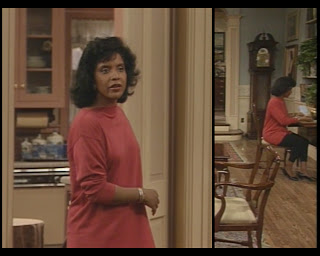 I'm charging you with two counts of Phylicia Diminishment.

Big shirt, black leggings. End of story. I guess we could talk about the not-quite-mock-turtleneck situation at her collar. That's weird, right? 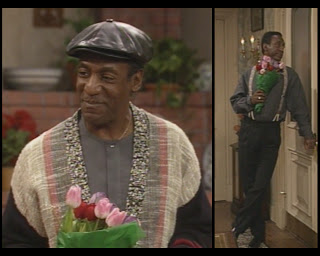 He bought his daughter flowers! Too cute.

Cliff first wore this shirt in episode #4.14, while the cardigan is from #3.16. He's doing better when that horrid sweater thing is gone. 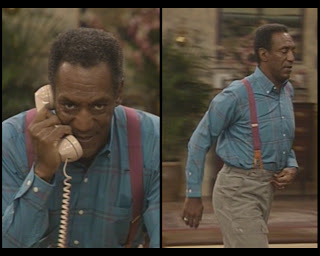 Though he has similar shirts, I think this specific piece is new. It's a good color on him, I understand why he'd repeat it. The plaid has a nice, soft purple undertone that matches his suspenders ideally, though, so I'll position this as a refined ideal based on previous experiments rather than another random teal creation. Well done, doctor. 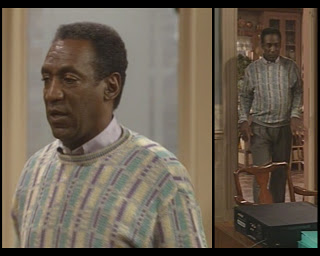 His last look is an episode #4.5 repeat.

Wow, I'm glad there were so many recycled pieces this episode, because that was a lot of clothing. Still, it's worth it to get Denise back. She gave us some truly revolutionary displays of sartorial excellence, didn't she? I might need to start watching A Different World just to see if she looks that incredible on all those episodes, too.
Posted by Unknown at 8:00 AM