Has anyone else found it odd that Cliff and Clair have lots of friends they haven't seen in a long time, but no regular acquaintances? As best I can tell, they see each friend once every four to six years. Today, we get to see them reconnect with James and Nicole Harmon. The couple bring their daughter Lindy (which is probably a total drag for her, honestly), who is about Theo's age. While the men get unnecessarily competitive about a game of petanque, Clair tries to teach Theo a lesson about valuing women for their brains rather than their beauty, with Lindy serving as an unknowing pawn in this little life lesson. 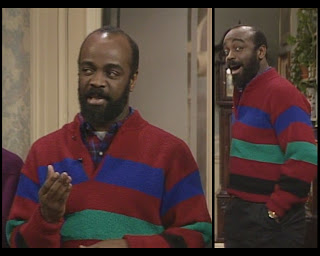 Lines just sound better spoken in a low voice with a Trinidadian accent.

Dr. Harmon is played by Sullivan Walker, a Trinidadian actor who died roughly a year ago. His last role was Grandpa in 50 Cent's Get Rich or Die Tryin'. Looking at his clothes, he tried to break from the norm with a little power clashing, but doesn't manage to actually find the power in it. The broad stripes in the sweater have no relevance to the plaid shirt beneath, even if both garments use similar reds and blues. I would have accepted an oatmeal top layer, maybe with a lighter band across it if he absolutely had to, or even brick because why not? But this combo is a no-go. 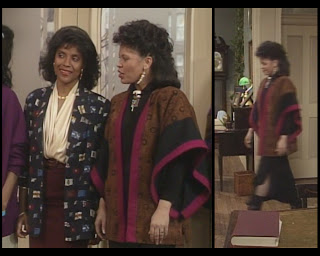 Is she the captain of Jefferson Starship or what?

Nicole Harmon is portrayed by Michele Shay, an actor whose earlier work included some Shakespeare and theater. Her look is clearly intended to be highly fashionable, but like any bold choice, it's bound to age poorly. The shape of the sleeve in particular feels dated, and the fuchsia trim does nothing to help that impression. There's nothing wrong with a kimono-inspired top, but the length and color choices feel a little ridiculous. Shoulder pads were also a bad call, and I'm not sure I can condone the earrings and neck brooch, either. On the other hand, the slit skirt and high boots are alright, and at least she's being courageous in her selections. Loudly messy is usually more compelling to me than safe and boring. 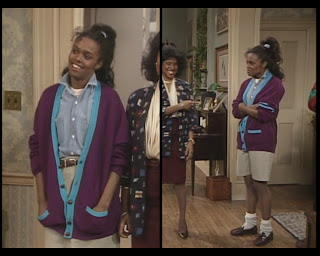 Which I guess makes this one the first mate.

Laurie Morrison plays their daughter Lindy. This role marks her screen debut, but after seven more small acting gigs, her resume ends. Her sense of style is obviously in need of an update, because she's doing everything she can to stifle her natural beauty. The thick, bunchy socks at her ankles conspire with the knee-length skirt and low-slung cardigan to make her legs look as short and stocky as possible. But since the skirt's waist is riding so high, she bizarrely also manages to foreshorten her torso. Meanwhile, the popped collar thickens her neck, and the shapeless sweater obscures any remaining hints of her actual outline. This might be the absolute worst configuration of clothes for her. In terms of palette, she was doing fine until the cardigan: the trim actively conflicts with her denim shirt, while the eggplant base just feels too assertive for the preppy foundation on which it rests. This is a failure all around. 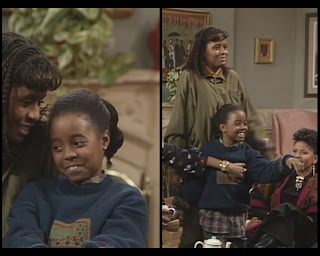 Rudy appears only briefly in this episode, but the look she delivers is rock-solid. That grungy plaid is ready for the '90s, and the sweater is just childish enough to work on her while still bridging the gap into a more mature look with the deeper color scheme and subtler graphic. 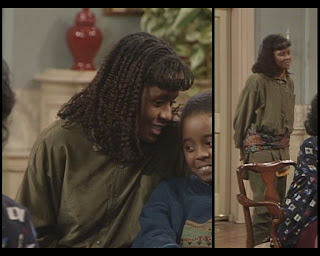 I wouldn't let her captain a bath toy.

Since Denise already killed it with the flight suit a couple years back, Vanessa is going to have to up her game if she's planning on doing the monochrome olive thing. This isn't even one piece: rather, it's two of the slouchiest garments she owns. Even with the rainbow-patterned something-or-other wrapped around her waist, she's still basically sporting a sack. It's just as well she disappears quickly to her room. People don't need this in their lives.

Fine. I don't need to see new clothes. Whatever.

Theo's outfits this episode are both repeats, from episodes #4.3 and #3.13, respectively. He wears the seam-front jeans both days, just to taunt me. 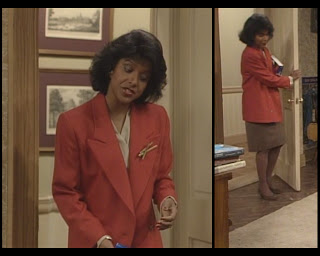 Clair's first look is a direct #4.14 repeat; only her pin has changed. 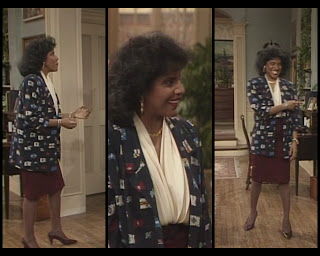 This top is probably the one she wore under her episode #4.17 jacket, but the rest of this is new. Looking at the shape, she's not miles off from her usual style, and it works for her. The real problem here is that the pattern on this blazer is completely unappealing. A solid color, or even a more understated print, would have served her much better. There are ways to have fun with businesslike attire, but this isn't one of them. You're better than tacky designs like this, Clair. What are those, flags? Come on. You're not in the suburbs.

Cliff also delivers two oldies but goodies (and also decides not to change pants on consecutive days): you're looking at sweaters from episodes #3.22 and #4.11. 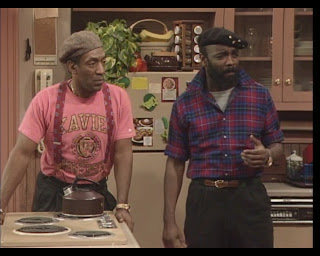 In closing: the men play petanque without their coats and sweaters. Because that's how manly.

Happy holiday-that-you-celebrate-around-this-time-of-year, everyone! (I know, we're sort of post-holiday now, but whatever.) Hold onto the Hotness; spring is just around the corner!
Posted by Unknown at 8:00 AM