This week, Rudy tells her parents a story she wrote. Since almost everything takes place in a fantasy world, there's really very little to say about their clothing. Nonetheless, I committed to exploring the fashion choices made by every character in every episode, so I will attempt to make at least one worthwhile observation about each outfit, real or imaginary. 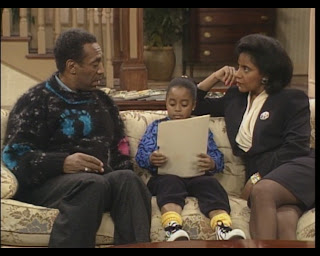 The borders for this week's screencaps are uneven and I was too lazy to fix them.

Let's start with reality, which is pretty much all repeats. Cliff does a wholesale recreation of his episode #4.14 look. I'm glad he brought it back so I can admit to being a little dense and not recognizing that his sweater is a rather obvious reference to his profession. Thanks to commenter Casey Fitzsimmons for pointing that out to me. Clair brings back the suit she wore when she put Theo on trial, albeit with a new brooch. It remains flawless. Rudy's squiggle shirt is all the way back from #3.17. but the overalls are new. They're not actually capri length, they're just riding up. 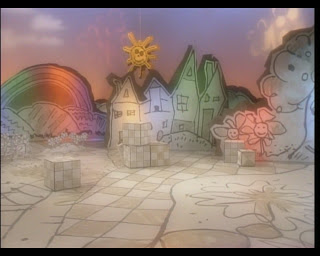 The border thing is bothering me. Now I wish I had done something about it.

The rest of the show takes place on this set. I kind of wish more sitcoms did episodes that looked like a grade school play. 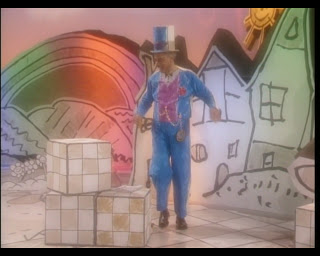 Why did Rudy decorate her world with checkered boxes?

The first person we meet is the mayor, as played by Grandpa Russell. He introduces us to the aesthetic of thick, uneven, hand-drawn lines and bright, front-only colors. His style of performance also immediately establishes the heightened, presentational manner in which the scenes will be played. He wears the suit, pocket watch, and top hat that children would associate with a generic authority figure. 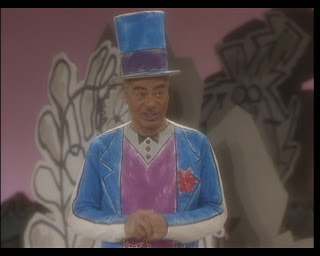 She put some real thought into that tiny little collar, huh?

Bonus points for the little flower in his lapel. 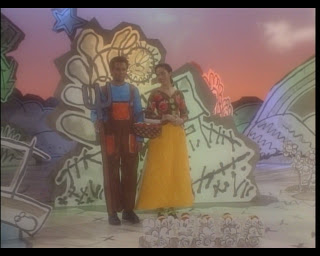 Even when imaginary, they're pretty boring.

Sondra and Elvin also live in this town, as farmers who grow floobaroo. As best I can tell, their crop is actually hamburgers, but everything is shot in soft focus, so it's difficult to know for sure. The commitment to a limited palette really helps sell this as something created with a box of markers: notice how their browns match perfectly, and how the blue in Elvin's shirt is the same one used in the mayor's suit. 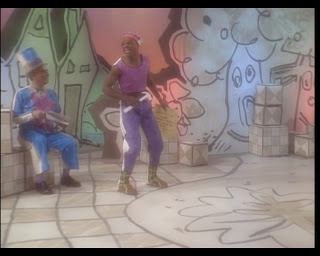 He's sort of rapping here. But really only vaguely so.

The town crier, played by Theo, has a more up-to-date style, with a beanie hat and a midriff-baring tank top. His look is actually a little jarring; I'm not sure if I buy that Rudy would give him such trendy pieces when everyone else stuck so closely to the generic medieval fairy tale mold. 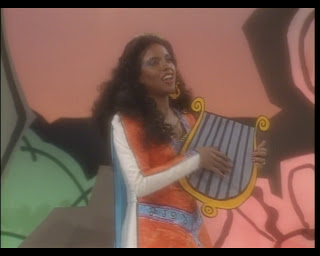 And the Emmy goes to Phylicia Rashad for her portrayal of the village songstress. She's acting with every fiber of that wig. 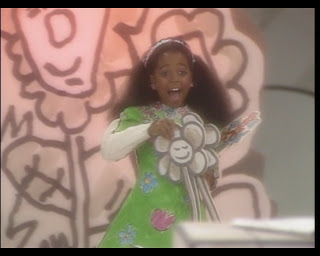 This is her excited face.

Rudy casts herself as the flower girl who eventually saves the day. The role allows her to wear blush, which would normally be against the rules. (Let's not forget all the trouble Vanessa got into for this sort of thing.) 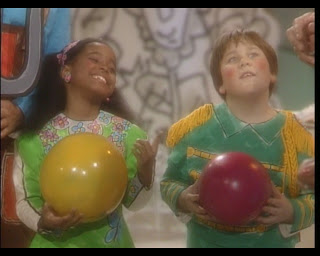 Peter shows up to lead the parade. His arrival shows us that there are multiple shades of green happening here. Rudy is probably also the only person to get those pastel blues and pinks in her outfit. I don't know how I feel about the introduction of subtler shades. We kind of had a concept going. 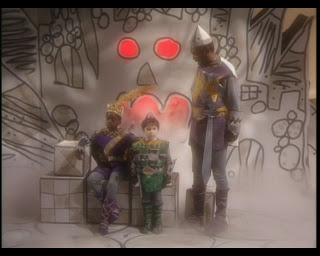 Of course, every story needs antagonists. 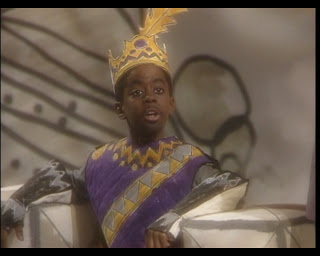 The nemesis always gets the best costume.

Kenny plays the evil ruler a neighboring kingdom who conquers the nice, fun, happy people. The limited palette is back in full force for him and his minions. Bad guys usually know how to coordinate. 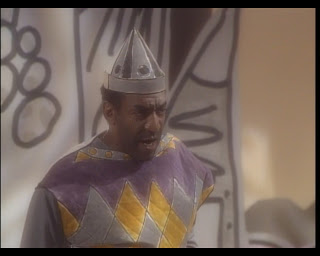 It's almost the Ren Faire version of a Cosby sweater.

Cliff is one of the more conflicted members of the crew, as he develops a crush on the songstress (who denies his advances, of course). The beard growth and heavy eyebrows aren't as funny on him as they are on Kenny, but I love that evil people don't shave. 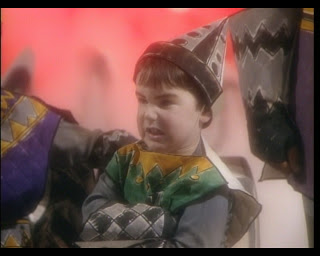 Peter's little brother Paul really nails it as the meanest of the bad guys. Look at that face. 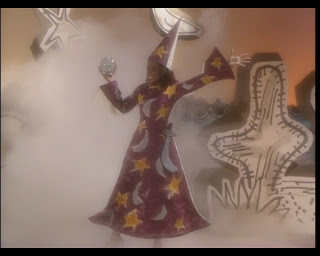 Trying for the full Beyonce. Not even really getting to Solange.

The wizard, portrayed by Vanessa, gets one of the best costumes. The use of wire to create a gravity-defying flare to her skirt and sleeves helps to define this creation as a scribbled outline rather than a sewn garment. Also, the stars and moons on her robe are larger and sloppier than the details on many of the other costumes, which I like. 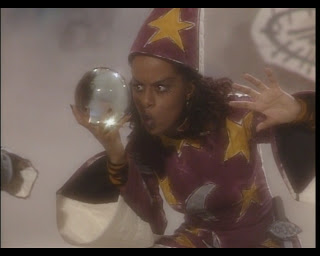 I'll maybe give her Kelly Rowland.

She does, however, get some surprisingly detailed eyeliner. It's not impossibly complicated or anything, it's just clearly finer than a child's handiwork would have been. They maybe should have given her a less dainty smear of something. 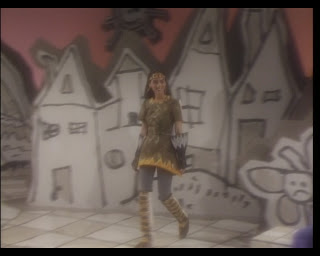 That makes this one Michelle Williams, I guess.

Our last entrant into the story is an unnamed character played by an uncredited actor. She's the foxy member of the conquering army who seduces the town crier into joining the dark side, or at least dancing with them for a little while. Her particular shade of olive does not appear elsewhere in the story. Rudy's marker collection is vast.

So there you have it: imaginary fashions of the late '80s. Next week, we'll get back to what people were actually, physically wearing. I think it'll probably be more interesting all around.
Posted by Unknown at 8:00 AM