Though Cliff believes himself to be a skilled handyman, his family (not to mention his track record) tells a different story. Thus, when a leaky pipe entices him to take a sledgehammer to the bathroom wall, Clair makes a desperate call to every plumber she can find. Hearing about the crisis, Sondra recommends some of her friends for the job. Their youth causes some doubts initially, but they do a fantastic job for less money than their estimate quoted. Everybody lives happily ever after. 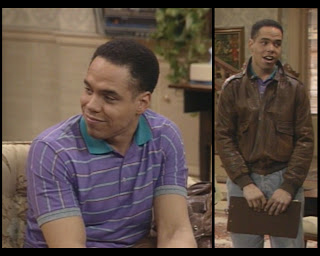 I'd polo you to the ends of the earth.

This is Ted, who does most of the talking for the Princeton-educated workers. (Since Princeton does not have a major in this field, it's unclear where their collective knowledge of plumbing was gathered.) He's played by Kevin Rock, who has worked here in there in small roles. His IMDb page is notable for having an acting reel uploaded, which I wasn't aware people actually did. Good for you, Kevin Rock! His clothes make a lot of right choices in a lot of wrong colors. That polo fits decently, and the multiple shades of stripe are catchy, but the lavender/teal scheme is no good, and the use of gray in the torso makes the collar look mismatched even though it truly does use the same dye as the rest of the shirt. On the other hand, I can get into a leather bomber jacket. Some things never go out of style. 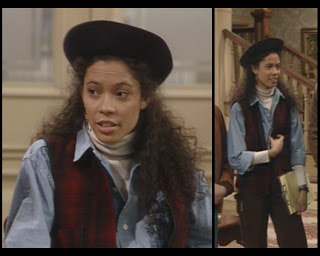 Jennifer, one of three women on the team (and the only one we'll be reviewing since the rest wear coveralls), is played by Erica Gimpel. Prior to this episode, she was known for playing Coco Hernandez on the TV series Fame. She has worked consistently in television and film since then. This outfit is solidly committed to the Renaissance revival that was happening in the mid-'80s. She's got the hat, the high collar, the blousy shirt, the vest: she could be Michelangelo's particularly outdoorsy assistant. I don't know if the rustic vibe from the red plaid and denim and cotton turtleneck mesh well with the classical inspirations, but I'm happy that she has a concrete, unique perspective. Denise would do something like this, and I'd applaud wildly. 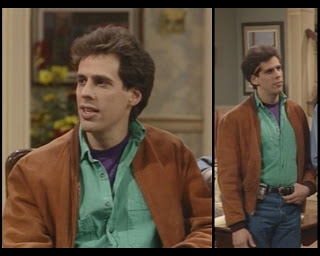 Some character actors are made, while others are born.

Josh Pais, in his first acting gig, plays Andy, the third plumber. He's gone on to have a solid career as a character actor, appearing in films ranging from A Beautiful Mind to Teenage Mutant Ninja Turtles (he voiced Raphael). There's nothing great happening with his wardrobe right now, I'm sorry to say. The sea green isn't so hot on him, and the pairing with purple is totally of its time. And not in a good way. Beyond that, he's wearing his pants too high. Plus, a medium brown jacket with no detail is the most boring top layer you could wear. There has to be some sort of adornment you could add. Pockets? Stitching? Patches? Anything. I kind of hate this look. 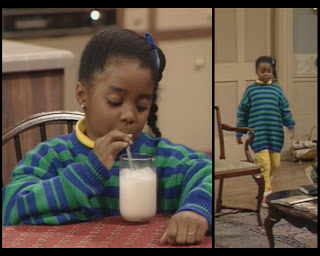 I should drink more thinks out of straws so I can do this.

Rudy last wore this sweater in episode #4.14. I have to say, it looks better against the yellow base somehow. I should still hate it, but I don't as much. 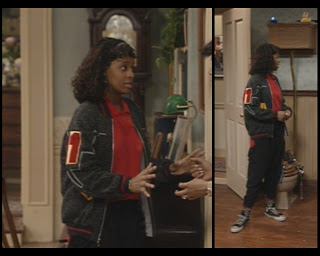 She plays future sports. Which are still past sports from our vantage point.

In comparison to some of the other exemplary-of-the-decade jackets Vanessa has shown us, this one isn't so bad. Sure, it has that ridiculous Tron line on the side, but otherwise it's a classic '50s-themed piece. The red polo underneath isn't awful either. She screw it up with the pants, though, because the length and fit positively scream of a bygone era. That's the thing about super-trendy garments: they're almost sure to age poorly. If she were just in trim black slacks, she'd probably look OK here, even with the junky sneakers. Instead, she reads like a goofy relic. 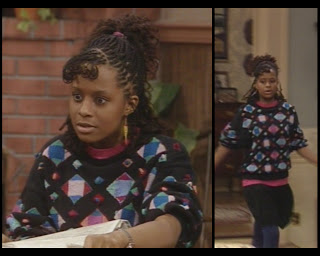 She apparently also does some future knitting.

This sweater can't have looked good even back then, right? It's so Quacker Factory, especially with that dark pink shirt beneath it. Jeanne Bice would go nuts for that hue. Honestly, if the quilt-patterned wool thing were gone, this might be a passable look: blue tights, black skirt, pink top. Nothing revolutionary, but a sound showing. That's what she should have done. 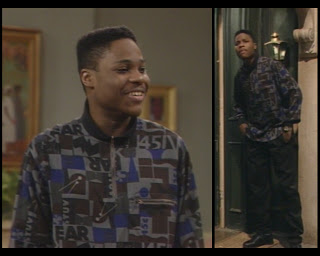 Up close, I don't despise that pattern on Theo's shirt. I'm even a little intrigued by the use of text to create a print. Similarly, the cerulean and chocolate work well with the gray when you get up next to him, though I might want less (or even no) black in the mix. You take a step back, however, and the whole thing falls to pieces. It looks messy. And when your print is messy, the last thing you want is too much of it, so it's a shame that the shirt is so large. The pants have tailoring issues, too. This isn't doing it for me. 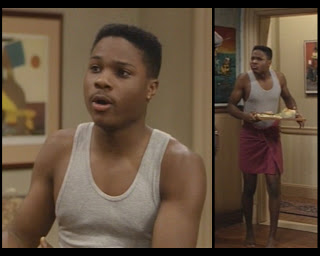 I didn't mean you shouldn't put something else on. Dude.

I realize that this isn't an outfit. The gag is that Theo, enamored with the female plumbers, serves them sandwiches in a towel. The reason I'm putting this out there is because the script never reveals Theo's excuse for not wearing pants, though it's clear that he intends to give one. I'd love to know his justification for this ridiculousness. 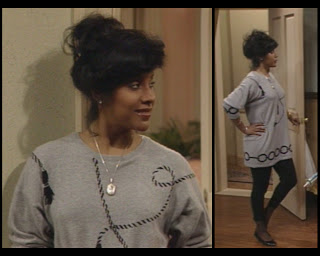 A phenomenon, ever and always.

Clair serves two repeats this week. The first is from episode #4.11. It's interested to see that the bauble dangling from her top, which I so loved last time, was not built into the garment. (Not sure why I thought it would be, really: that's not very practical from a cleaning and ironing standpoint.) 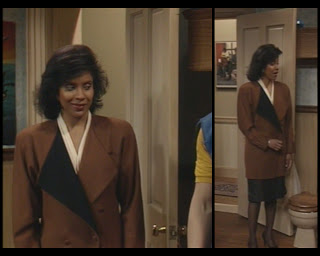 Her second look is a repeat of an episode #4.2 ensemble, head to toe. 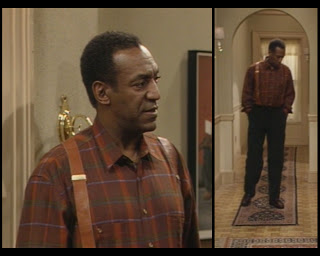 Not one joke was made about the obstetrician being bad with plumbing!

This is a good plaid for Cliff. The brick foundation is served well by the rusty accents flecked with darker forest greens and even a vein of blue in there. I'm not sure how I feel about the material of those suspenders, however. Is that leather or suede or something? Maybe just stick to cloth. Perhaps it's just my personal background, but I can't look at a glossy strap like that without picturing fetish gear. Save the harness for your private life, doctor. 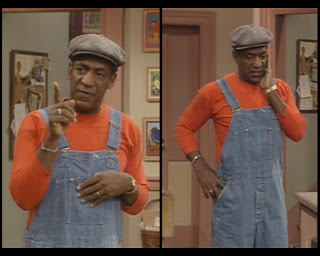 He's the conductor on the Ruining the Bathroom Train.

He spends most of the episode in overalls because he thinks he's going to help with the plumbing. He is not. After this orange shirt, he chooses a yellow one. There's no need to review t-shirts and overalls, although his use of eye-catching tones does please me. 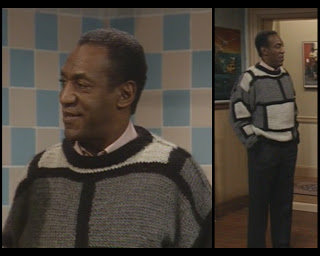 The subdued shades show his defeat in the face of Clair's unending correctness.

His final presentation is structured but still appropriately weird. I'm not sure that I can define precisely why this sweater is strange, even though it obviously is. Maybe just because he's wearing it. There's something also about the size of the brick pattern. It's huge, as though someone zoomed in on a single frame from Super Mario Brothers or something. Also, the expected visual trend breaks down at the sleeve, which is disorienting. I'm into the soft pink collar against the monochrome top layer and charcoal pants. This is a pretty nice getup, truth be told.

Well, there you have it. Don't go to Princeton: you'll just end up working a job you could have gotten after trade school. Save your money, take a correspondence course in elevator maintenance. (Don't listen to me. Go to a good school. You don't want to end up frittering away your time writing a blog about a TV show that's been off the air for decades. When people ask what you do for fun and that's your answer, you'll receive such pitying looks! Take it from one who knows.)
Posted by Unknown at 8:00 AM