Gender equality was a huge issue in the 1980s, huh? Beyond the constant attention given to the topic by recurring characters like Elvin and Kenny, The Cosby Show sometimes uses whole story arcs to talk about the importance of eradicating sexism. This week, Vanessa and a group of her female friends try out for drum major after realizing that the position has never gone to a woman in their school's history. When Theo finds out that his friends who judged the audition process were going to choose a male no matter what, he petitions the principal and earns his sister (and all the other hopefuls) a second chance. Vanessa still isn't picked, but at least she had a fair shot. Meanwhile, Cliff cooks a chili dinner at which Russell plans to finally pay back the $100 he has owed an old friend for decades. 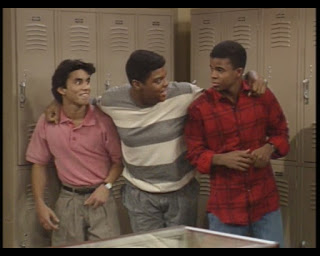 It's still weird to me that Cockroach is gone.

These are the three dudes responsible for shutting out all the female contenders. They have each previously appeared on the show, but Denny in the middle has never been seen in street clothes before, so that's something. On the left, we have Gerald. He's particularly skinny, which was a hard build to rock in a decade so focused on volume. The pleated pants and ill-fitting polo fight against his frame rather than working for it. Tucking the shirt in helps in some ways (defining his waist) but hurts in others (exacerbating the impact of sizing issues everywhere else). Denny, on the other hand, serves as contrast to prove that pleats don't work on anyone. He's a broader man overall, and his pants add volume in exactly the wrong place. Donny's outfit isn't sized expertly either, but of the trio, he's closest to the mark. He also wins me over with the assertive red plaid. The other two blend too easily into the lockers behind them. They might look at girls, but with palettes so muted, the girls will never look back. 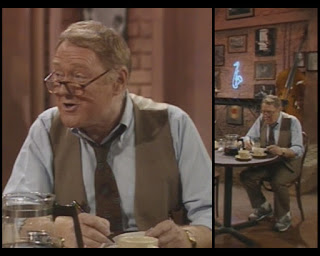 Another one not even listed on the IMDb.

This is Hazen Gifford, playing an unnamed character who works at or manages or maybe owns the jazz club that Cliff and Russell visit. I was initially put off by the blue shirt under all that tan, and then I was OK with it, but now I've come back to my initial dislike. I could see the effect working with a warmer tan and maybe a slightly brighter color beneath it, but this comes off too dirty and dusty for my tastes. Also, the sneakers have got to go. Nothing says "tourist" quite so loudly as athletic shoes worn with nice clothes. It's the trademark of someone who has begrudgingly accepted that he will be doing a lot of walking on this trip. Other than the shoes, I'd accept most of this, and with some tweaks to the color story would even call it a success. 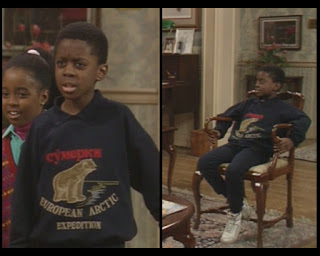 You need some swag to match that swagger, dude.

Kenny drops by for a minute to up the misogyny ante. I hate to break it to him, but a sweatsuit with a collar is still a sweatsuit. Dismissed.

This was sewed from scraps found behind a discount furniture outlet.

Musician Slim Claxton is played by Dub Taylor, who has basically been in every Western released since 1938. Seriously, his resume is enormous. Out of respect for his prolific contribution to the entertainment industry, I'll refrain from lingering on the sheer hideousness of this getup. (But it's pretty bad, right? That vest! What the hell is that vest?!) 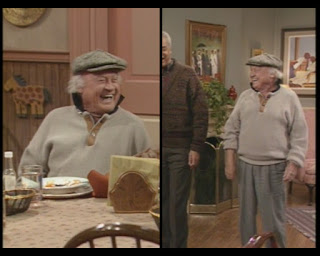 His manic Cajun cackle will haunt my nightmares.

Slim gets a second outfit, but it's no better than the first. This is what would happen if L.L. Bean released a line of clothes for the homeless. 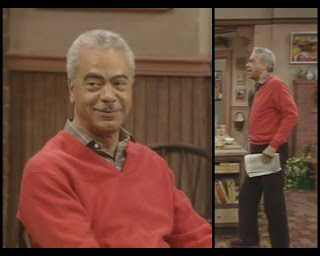 Givin' you that Panthro eye.

A coral sweater over chocolate cords? Russell, you're too good to me. The collared shirt is impeccably matched, reflecting lighter shades of the colors already present in the outfit to soften up the plaid. This is gorgeous, as is just about everything he wears. 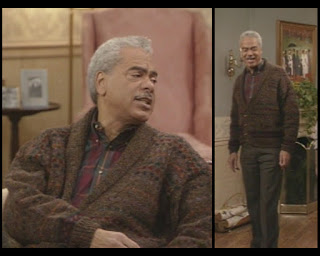 The key words being "just about." Contrasting with yesterday's vibrant concoction, this is all drab and muddy. The browns, maroons, and pines (and even occasional mustards) lack any definition. Everything runs together in a soupy mess. The cardigan should never be worn again; the other pieces can be worn separately but never together. 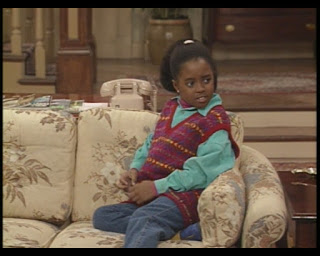 It might be ugly, but at least you know she's got confidence.

I can never tell if Rudy's clothes have growing room or if this is just a stylistic choice symptomatic of the then-current obsession with bigness. Whatever the motivation, she looks like the world's youngest expectant mother in this. Too pear-shaped, Huxtables. Buy your daughter clothes that at least vaguely fit. Part of the problem is the extreme layering. If you look closely, you can see that she has a fuchsia turtleneck on beneath the long-sleeved polo and sweater vest.The palette suggests that Cliff had a hand in putting this together. 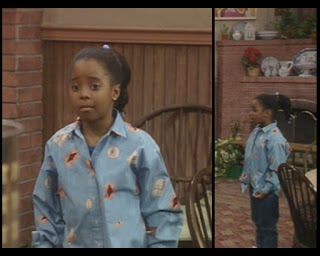 Back again, for some reason.

This shirt is a repeat from the season premiere. 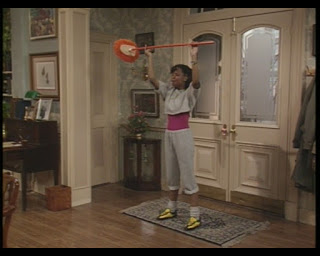 Putting the major in drum major.

Though Vanessa is in workout clothes and I don't typically review those, I thought it would be worth noting that these are the same sweats she wore in episode #3.15. 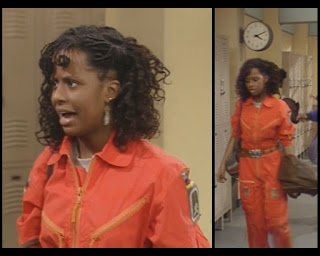 She didn't seem that distraught in motion, but that freeze frame is SAD.

Her presentation for the day of the tryout is close, but overlooks some key factors. Usually I support the coveralls option for its forward-thinking take on fashion. Other than garage workers or certain military personnel, our main point of reference for this garment is depictions of the distant future in sci-fi movies. But her color and fabric choices here miss the mark, and the overabundant zippers and patches are the wrong way to embellish. Similarly, the belt seems like it belongs to an entirely different outfit. She's out of her league here. 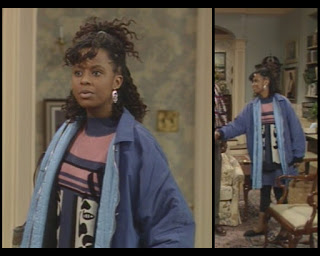 I hate that coat so so much.

Her second outfit remains buried under a coat, so there are mysteries afoot. Is that a turtleneck sweater, or a sweater over a matched turtleneck? What are the black-and-white markings across her midsection? Pandas maybe? I dunno. It's not a terrible effort, but rather than wearing a long-ish top over a skirt, she should have gone whole hog and worn a knee-length sweater. Which should then have been belted. It'd be an improvement. 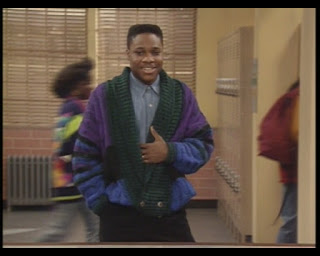 Russell wore this cardigan in episode #3.11, and it was one of the rare times that I offered negative feedback on his wardrobe. It doesn't look better on Theo. I could debate the merits of the black pants and denim shirt in terms of how they match the sweater, but really nothing can or should match it. It should go away. 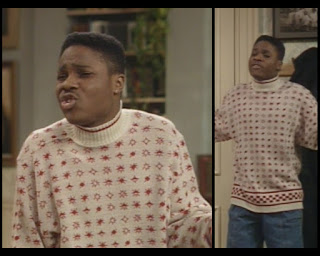 Have we ever seen Theo in red and white before? Because I'm loving it for him. This is a good holiday sweater. I'm curious as to whether those little icons are indicating snowflakes or phases of the moon or what, but regardless, this is a quirky, cozy turtleneck that almost makes me forget that he's wearing those horrid front-seam jeans. (People are big on the turtlenecks this week!) 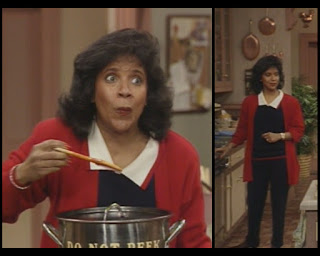 This one isn't accidental. She meant to make that face. And several others.

Clair appears only briefly, and while her chili-tasting performance is outstanding, her look is unbelievably dowdy. There are many small points that work against her, from the roomy fit to the color scheme to the width of the white collar. What really kills me, though, are the trims everywhere. There's a red band on the edge of her collar, a white band at the cuff of her cardigan, and another red stripe across her midsection. That mundane, suburban insertion somehow ruins this more than anything else. 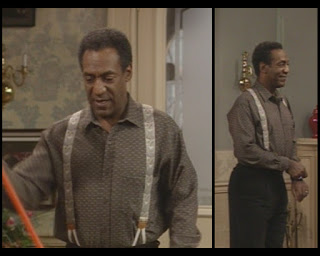 It's weird that he's not the one with the crazy expressions.

This is not Cliff's episode #3.6 shirt, though it may as well be since it has all of the same problems. The print is so small that it just makes the shirt look like it's fraying or pilling. If it were a simple gray checker or stripe, this would actually be a nice outfit, not to mention a rather dapper shift from his usual style. It was a nice try. General wardrobe advice: don't have two of the same thing. Diversify. It helps you avoid wearing a uniform. Like, if you have three red sweaters, you're done: get an orange or a purple next time. 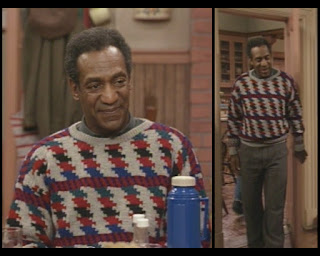 That thermos is full of hatred for this getup.

I can't get far enough away from this sweater. Our planet's gravity prevents it. Nothing more can or should be said.

Sorry these entries have been a little sparse lately. I'm writing for Queerty (a paid gig!) now, so if you watch either RuPaul's Drag Race or Girls then you should check out my recaps, posted every Monday and Tuesday. I mean, I'm assuming you watch current TV, too, and not just the classics.
Posted by Unknown at 8:00 AM