Theo is scared to go to the hospital to see friend Jake, who has cancer. Elvin is lonely while Sondra is away in Boston and stops by the Huxtable household to cheer himself up. If you're suspicious as to whether such a thin plot could make a good episode, you should be: it's an occasionally preachy bore. Stick with it, though, because Elvin's Bill Cosby impression right at the end is worth it. 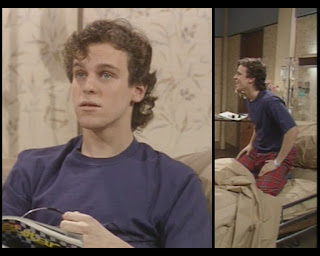 I'm your private cancer, a cancer for money, do what you want me to do.

This is Jake, who looks pretty vibrant for someone whose cancer treatment prevents him from leaving the hospital. Other than a sudden bout of fatigue after a fake basketball game, he doesn't seem to have any visible symptoms. Hell, he's not even going through chemo: look at that luscious head of hair! I'm not going to review his clothes because they're pajamas. The actor is Christopher Collet, who is most known for playing Paul Stephens in The Manhattan Project. 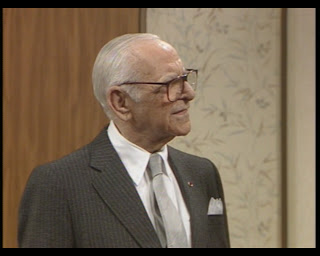 This gun's for hire, even if it's just cancer in the dark.

His caring grandfather dives in at the end to give a supremely subtle talk about how he's sure our government could find room in the budget for cancer research if everyone would just write a letter to their representative in Congress. Like, right now. Go get a pen. (This is back when people wrote physical letters with pens!) The performer is not an actor, but industrialist Armand Hammer. At the time, he was a member of the President's Cancer Panel, which I assume motivated this cameo. In terms of the look, I'm not going to come out against a charcoal pin-striped suit basically ever. Who would? I feel particularly great about the light tie and matching pocket square. Nice job, sir. Also, thanks for providing some of the genetic material that went into Armie Hammer. He's an attractive man. 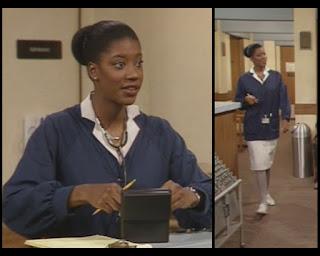 The nurse stationed outside Jake's room is played by Gwen McGee, who plays a lot of nurses and detectives. Occasionally she is a police officer or judge. She also has intriguing names like "Weird Sounding Lady" and "Woman Harboring Fugitive" in her recent credits. I probably wouldn't have mentioned her except that her resume is long and strange. 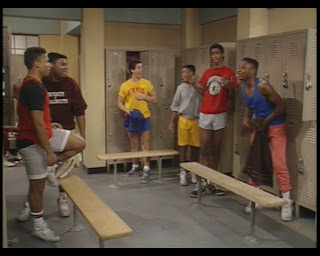 The same bunch of Theo's friends from the last locker room episode are back, but since they all wear gym clothes, we're just going to acknowledge them and move on. 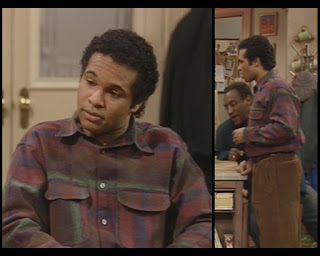 At least we acknowledge that he can't afford to buy new clothes all the time.

This is Elvin's episode #2.19 shirt paired with his #4.7 pants. He needs to tuck his shirt in tighter. 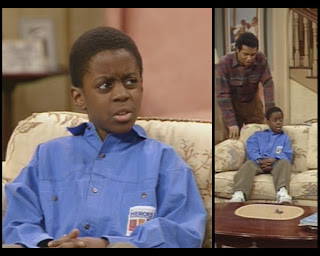 Kenny drops by for a bit, dressed like a kid. The patch proudly displaying the word "heroes" leaves me a little curious. Is that a brand name? Is he self-identifying as part of a pint-sized collective? Does he look up to the little blocks of color depicted below? I need more information. 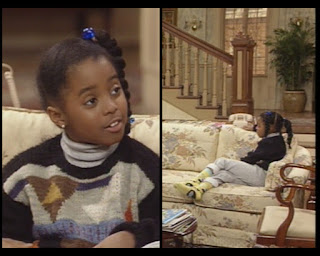 She is eight years old and will talk on down to you.

Rudy's sweater has some sort of abstracted image on it. Like, that might be a white sunbather in a red bathing suit. And is that an upside-down Triforce? Lunacy. The stuff beneath is fine, just a matching turtleneck and sweats, but I have to caution her against rolling up her pant legs just to show more sock. You have to let people notice those little flourishes on their own. 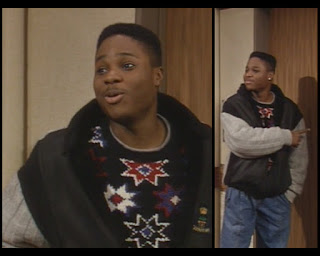 His arms must get cold easily.

Vanessa doesn't make an appearance this week, so we'll skip straight to Theo. He visits Jake in his front-seam jeans, which give me eye cancer. That sweater on top isn't great either. The red, white, and blue scheme doesn't read "patriotic crafts sold by a maiden aunt at a rally somewhere," but that doesn't make it good. At least he obscures it with this ten-sizes-too-big jacket with... are those sweater sleeves? 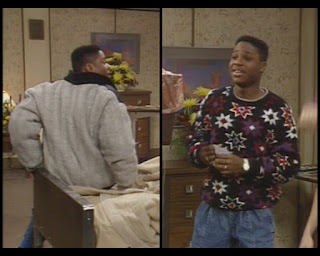 Nope, that's a whole sweater back. Guh ross. And then look at the grisly results once his coat is removed! That print! Is his intention here to prove that the world outside the hospital isn't worth visiting? 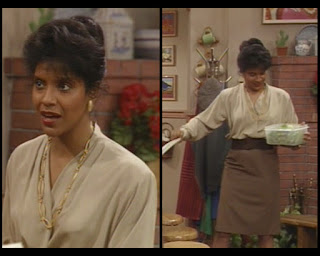 Everything. She is everything.

Thank heavens for Clair. Does she know how to work it or what? High-waisted skirt? Beautiful. Thick belt? Stunning. Simple neckline? Tasteful jewelry? Just the right amount of drape in the blouse? Austere color choices? Killer updo? Yes, yes, all the way yes. She is a gem and I can't get enough of her. 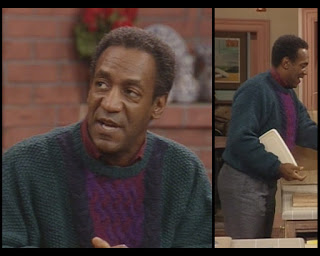 Cliff brings out yet another sweater, but this time he's sneaky about the craziness. From far away, it seems like a simple blue-green garment with a magenta band down the middle. Maybe you'd be fooled into thinking it was a cardigan over a shirt, but not for long. But the closer you get, the more it resembles television static rendered in lurid technicolor and punctuated with tangible texture. If that isn't enough to give you a headache, there's also that burnt orange collar at the top, because who doesn't want yet another shade thrown in just for kicks? It's a relief that the pants are gray. Just stare at his knees until you recover.

And that's the end. Sorry, sometimes they're quick. You get what you get. If you can't wait until Monday when the next one is posted, maybe reread a random older entry.
Posted by Unknown at 8:00 AM