There's no way around it: this episode of the show is not good. The main plot involves Cliff taking Rudy and her friends to a vaudeville-style performance in what is objectively one of the worst-managed theaters in the tri-state area. I guess it's supposed to be amusing that the children find the show so dull, but really I was right there with them. Back at the homestead, Robert has paid the family another one of his surprise visits, and people have to take turns trying to convince him not to plan his lifelong commitment to a girl he only just met. 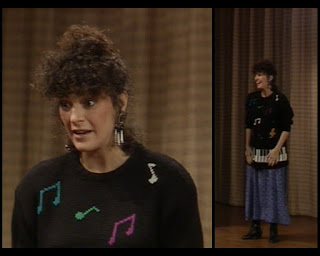 This getup does not inspire images of upward mobility.

The first person to greet Cliff and his brood when they enter the theater is Pamela, a Jill-of-all-trades who sweeps the floors, seats the patrons, serves the coffee, and runs the lighting board. She is played by Angelina Fiordellisi, who makes her television debut with this performance and has popped up here and there over the years on various other series. It is impossible to be undergenerous in describing her character's level of job proficiency; it's clear from the start that this woman has no idea how to appear professional. She's basically a walking apology for the production. Her outfit broadcasts that same weary, trying-a-little-bit-but-mostly-immediately-giving-up quality. The piano key sweater says "arts appreciation" only in the way that your great aunt enjoys listening to Kenny G albums, while the patterned skirt, dangly earrings, and frowzy hair give off the gloom of a depressed middle school substitute teacher. If you go to a play and this woman is your usher, turn around and find the nearest exit. 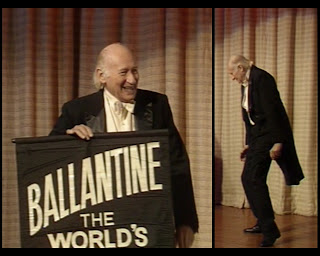 The first performer, The Great Ballantine, is not a creation for the show; rather, he is a real vaudevillian who I assume is doing the same schtick he did on the road. You might also recognize Carl Ballantine from his role as Lester Gruber on McHale's Navy. He's wearing an old suit with a tailcoat. The end. 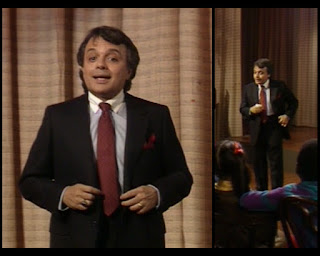 Next up is Andy Witherspoon III, the Wall Street Comic. His financial jokes go right over the children's heads, but the material would probably have a tough time finding an audience in any age bracket. He's delivering '80s broker realness, though, so his look at least makes sense. It's worth mentioning him mostly because he's portrayed by Carmen Finestra, a regular writer on the show who I had always assumed was female. Not so, it seems.

He's the only tolerable act to take the stage!

The emcee, and only reason to even consider watching this episode, is played by the supremely talented Bill Irwin. His combination of dramatic acting ability and creative clowning technique has made him a standout performer in a diverse spectrum of formats. You might recognize him from Bobby McFerrin's "Don't Worry, Be Happy" music video, or from his supporting role in My Blue Heaven with Steve Martin, or for his Tony-winning portrayal of George opposite Kathleen Turner's Martha in Who's Afraid of Virginia Woolf? His rich, red, ruffly tux with the cream shirt neatly conveys the formality and the antiquity of his role as host. He takes it seriously even though the show itself kind of sucks. We've all seen a situation in which an actor is better than the material but soldiers through anyway. Here, Mr. Irwin is both pretending to do it and actually doing it. 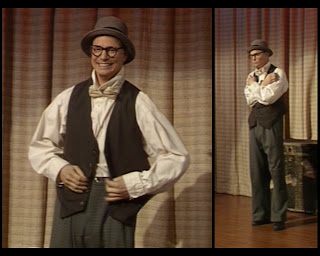 It's not perfect, but it's not more "stand-up" about Wall Street, OK?

In addition to hosting the show, he is also its closing act. The ill-fitting clothing highlights his character's clumsiness and also changes his shape to visually differentiate him from his work as the emcee. He makes similar adjustments facially by adding the glasses and hat. It's a great costume that allows him impressive freedom of movement without obscuring any of his stupendously precise physical comedy. 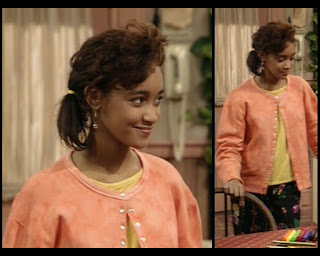 That hairdo has to be the result of a tragic accident. It's the only explanation.

This is Vanessa's friend Morgan, the object of Robert's affection this week. Though it's suggested throughout the episode that the girls are trying to avoid Robert, I can understand why he keeps chasing: the first time he meets Morgan, she gives him some serious flirt eyes. Maybe people should stop butting in and let the two of them figure this out for themselves! Maybe they'll like each other. The actor, Candy Tolentino, who is incorrectly credited on the IMDb as "Rudy's Friend," has acted on screen five times since this episode. In terms of fashion presentation, she seems to be better on ideas than execution. She's trying a lot of things with the patterned pants, the bright undershirt, the sort of sponged cardigan with only the top button fastened, and the loose, sideswept hair. She's siultaneously going for pastels on top and darkness on the bottom half. This is a lady with thoughts. It crumbles under the weight of itself, though. She looks like she was part of a reality show challenge involving wearing the first three things pulled out of a bin at a thrift shop. Like, she did the best with what she had, but she had almost nothing. 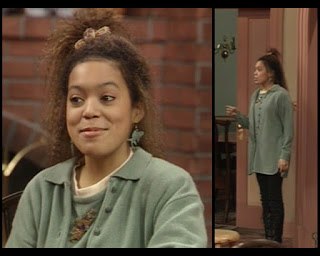 Ditto. I'll assume that they got caught in a fire or something.

Janet is back again and is mostly nailing it. To get them out of the way, she makes two major mistakes with her accessories. First is that thing on top of her head. I question the use of a faux Incan artifact to create a hair volcano. Second, there's that thing on her shirt, which might be a pin but might also be part of the top. Either way: get rid of it. Otherwise, the wider tunic shape over black leggings has fully reasserted itself, so she's doing fine with her silhouette. Also, I can't be certain, but I really hope that those earrings are oxidized copper, which would make the color story for this whole outfit just perfection. 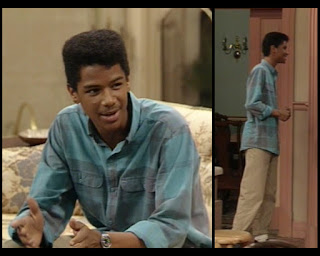 I feel bad for Robert. Will someone just marry him already?

Robert's a fan of a big, plaid shirt, there's no denying it. If it fit him, it'd be an ideal choice: this gray/aquamarine pairing is super sharp on him, and the khakis have a predictable but squarely polished appearance. If the tailoring didn't make him appear so pear-shaped, I'd adore this. Always look at yourself from multiple angles in the mirror before making a purchase, lest you fall into this trap. 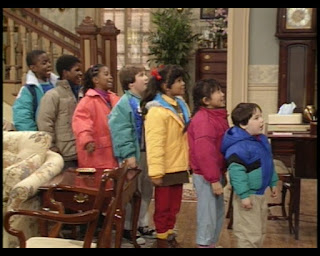 There are a lot of kids in this episode. We won't be checking in on all of them. 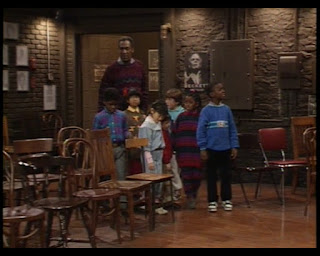 Maybe this half-hour of television is better if you're eight years old.

I mean, who are most of these people? 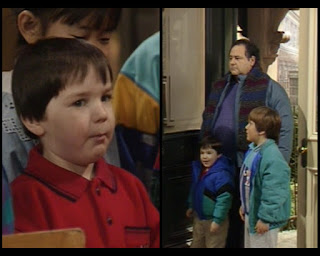 Who in New York actually knows their neighbors like this?

The Chiara family is back with a new addition: ultra-talkative younger sibling Paul. His acting career began and ended with this role. None of them are wearing anything that I care to talk about. 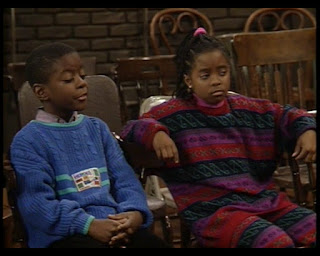 There was probably a better frame for Kenny, but there was no improving on this facial expression for Rudy, so I went for it. I don't have much to say about "Bud," but I wanted to acknowledge that he showed up and wore a sweater. Rudy, on the other hand, has ruined my day by proving that her leggings from last week have a matching top. And, as you can see even better in the wide shot above, this is a top that's sized to grow into. Lucky us. 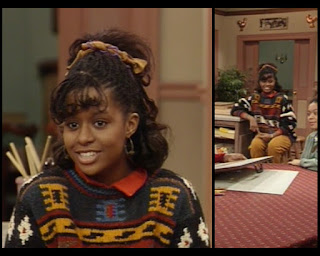 I think Vanessa is secretly the most interesting member of the household lately.

Vanessa's sweater is pulling on some Navajo or maybe Mexican inspiration in its patterning, using bold geometrics to create an overall decent impact. The mustard shade that she reflects in her trousers as well is a little loud, but it suits her. Normally I'd be concerned about the complex palette and encourage a judicious edit, but it seems to hang together in this case. It's a shame we didn't get a better view of the detailing at the bottom of her sleeves, because it looks like it might be wonderful and/or a wretched mess. She needs to fix her collar, though. 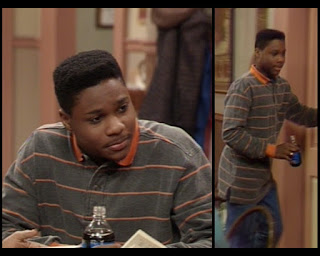 You were right there, Theo, and then you lost me. I'm on board with the orange stripes. A little Halloweeny? Sure. Slightly too neon? Whatever. But the length of this shirt. The length! It's maybe two inches shy of being a dress. Tailors in the '80s were sick. Utterly sick. 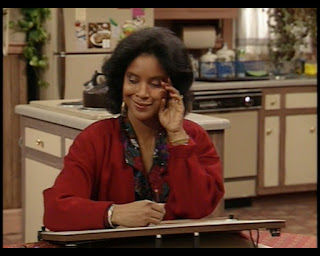 When you hide your face with your hand, people can still tell you're laughing.

Clair spends the entire episode seated, but from the waist up she's delivering repeats: the red top layer (which is so large that she has to roll the left sleeve, though for some reason not the right) is from episode #4.2, while the blouse (which we barely got to see anyway, so I guess it's good that she brought it back) is from #4.9. 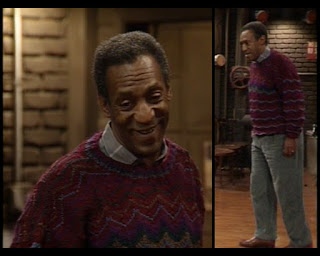 I'm bored, and it's his fault.

Cliff brings back his episode #4.10 sweater, though with a different shirt and pants. Gray surroundings don't make it any better in my eyes.

And there it was: another week with the Huxtables. As always, I'll be back next Monday. Sit tight until then, kids.
Posted by Unknown at 8:00 AM