Remember how Clair gardens once in a while? Well, this week she's entering her squash in a competition being hosted at the mall. The kids, of course, would rather go shopping, but when Theo and Vanessa get caught up in their own nonsense, Rudy goes missing. Luckily, she bumps into a friend and is returned to her parents, while Clair gets second prize for her gorgeous gourd. Side note: teenagers in Brooklyn do not go to the mall. The mall is not a thing here. And if there were a mall in Brooklyn, I'm pretty sure it wouldn't host produce fairs. 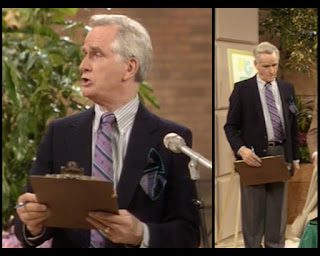 Lest ye be judged, dude.

But if they did have produce fairs, they'd apparently be judged by this man. Conrad McLaren doesn't have an extensive list of credits, though he was in some known movies like Green Card (in which he played Andie McDowell's dad) and Reversal of Fortune, so good for him! He's dressed like someone who has no idea how to look important, which is kind of great. Like, his character is just this nerd who really likes vegetables, and then one day it's his job to walk around with a clipboard, so he grabs his striped shirt and his striped tie and then decides what the hell, let's match this overdone washed-out lavender neck business with some overdone washed-out lavender pocket business! NAILED IT. 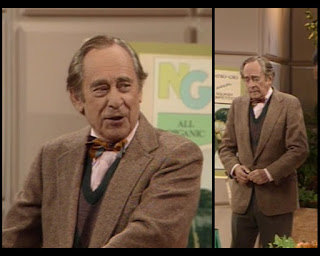 There's a lot of squash-as-genitalia innuendo in this episode if you look for it.

Clair's main competition in the squash contest is Norman Kirby, portrayed by Louis Nye. Mr. Nye passed away in 2005, but worked steadily, mainly in televised comedy, throughout his life. He is probably most familiar to modern audiences as Jeff's dad on Curb Your Enthusiasm. The character he's selling us here is a definite eccentric: he's been in the competition for years and has never won, and the pursuit has become obsessive. His vegetable has a protective blanket and a name (which we learn because he talks to it frequently). To offset the crazy, he's been dressed basically like a Grandpa Huxtable clone. Though the main components of this ensemble are brown and beige, he's not afraid to work in a deep pine, a pale pink, and even that bare hint of burnt orange in the bow tie. I'm surprisingly delighted by the way it all comes together. He could be a slightly quirky college professor, you know? I bet his lectures are really amusing. 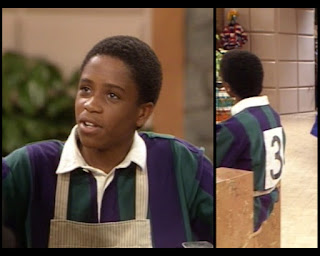 Aren't you glad you're not in high school anymore? Me too.

Oh. My. God. Danny Brenner is working at the Key-Osk. He makes keys! Vanessa can't even handle it. Marc Hardy, in his first and last acting credit, plays the man of the moment. I was inclined to give him a pass on that striped shirt until the camera panned behind him and I saw that giant number. Your life is not a sport, kid: you're sitting at a chair in the mall. Ease up. The purple and green are OK, I guess, but this isn't so great for me, really. 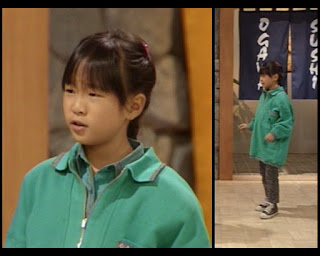 Maybe it's padding so that she's safer in a collision?

Rudy's friend Kim is back, and she's in a really big shirt. I don't have much to say about her, I just can't even believe the bigness. Her parents got the first shirt on her and then were like, "No. BIGGER." And here we are. 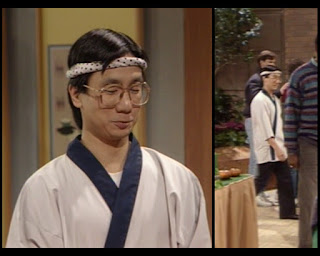 Look at him in that long shot. So tiny!

Poor Ronald Yamamoto got clotheslined into a string of highly stereotypical roles. After his part here as Kim Ogawa's dad, the owner of a sushi restaurant, he was cast as "Houseboy" in Wall Street, "Fuji (Kung Fu Tourist)" in Crocodile Dundee II, and "Fish Store Manager" in Love or Money. His credit directly before this? A character named Sushi. What he's wearing is a work uniform, so I'm presenting without comment. Though I feel like whoever chose his glasses took his Asian-ness into account. I mean, it has happened before in this show. 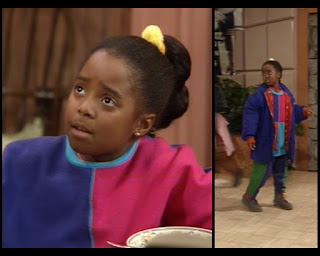 Her face totally says, "So you expect me to wear what now?"

I guess no one did the right thing and destroyed Rudy's episode #3.6 pants, because they're back with a vengeance. Worse still, she's got a clowny sweatshirt to match (clash, really), and it's sized for her to grow into. Clair Huxtable is basically threatening us with this top. "See how large it is? That's so she can wear it for years to come." 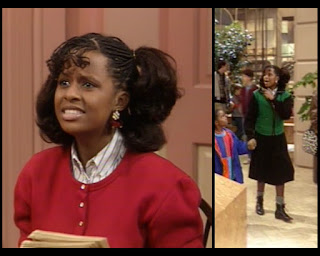 The kids spend most of the episode in their coats because of that thing where you have to go outside to get to the mall and it's all cold, but then you get inside and they keep it ridiculously warm in there but you don't want to, like, carry this big jacket around, especially if you're buying something, so you just wear it everywhere even though you're uncomfortable and you end up sweating through your inner layers and getting all fussy and mad and fighting with your family or maybe losing your little sister or something. Anyhow, this red cardigan is a repeat from episode #3.11, and the shirt isn't but may as well be. The length of her skirt couldn't be wronger: it comes across as SO dull and heavy. I could see it working in a lighter fabric and color, maybe a print. But that matte black? With the boots? And the bunchy socks? No, hon. You missed. 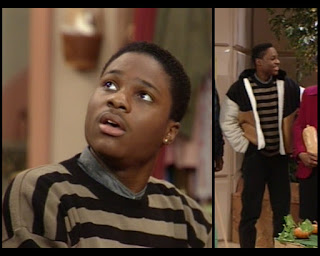 Without Denise, this is as close as we get to fashion these days.

Of course Theo finally steps up his game on a day when the goods are obscured. I'm going to invoke the "we don't talk about outerwear here" rule to avoid mentioning the atrocious coat so that I can instead focus on the positives. He avoids the obvious with that slate gray collar: the shade wouldn't initially seem suited for the rest of the outfit, while the style is fairly uncommon. It nonetheless works nicely with the striped sweater, which is subdued yet not plain and transitions nicely into the slim black jeans. I'm going to count this as a success because he gives me so little lately. 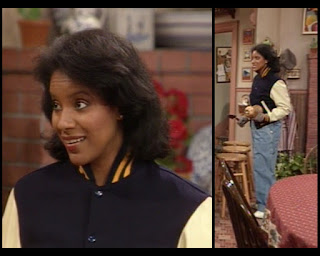 To be fair, she probably bought it with her own money.

There's no real reason to include a picture of Clair's gardening overalls except that I think it's cute that she's wearing Theo's old jacket (first seen in episode #1.14). 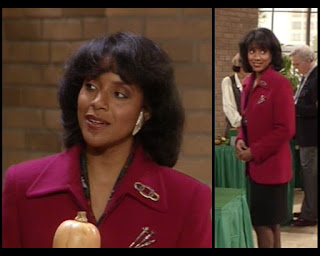 Her farming skills and steel nerves would serve her well in the zombie apocalypse.

She dresses it up for the competition, though I'm not sure this was the best possible selection. I mean, we've seen a lot of excellence from her, and this... meh. Maybe she didn't want to seem too ostentatious and stand out from the other squash enthusiasts? The magenta looks wonderful on her, but the collar is too wide, the blouse underneath is too busy, and the brooches are too much. Her daughter could take skirt pointers from her, though: slimly tailored and hemmed just above the knee. Now we're talking. 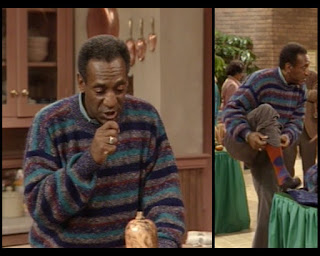 He talks to the squash multiple times.

Beyond simply living for Cliff's socks, I'm impressed that he went to such lengths to show them to us. Then again, if I had audacious orange-and-blue argyle happening, I'd want the world to know, too. Everything else is clearly average. The gray-brown cords are a staple of his wardrobe, but they're out of place here against the conflicting blue-gray in his sweater. Speaking of which: you can do better, Doctor. Horizontal stripes and loafy sleeves are beneath your capabilities. I know you've got more in you. 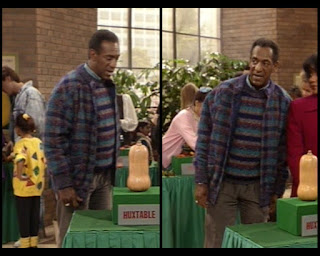 He also makes the squash wear his sweater. Not joking.

I spoke too soon. This is a matching cardigan/jacket hybrid, people. My favorite part is that it takes the stripes and turns then 90 degrees to create a plaid. It's a continuation of the theme, but also an escalation. The fact that these two pieces even exist is insane, and wearing them TOGETHER? What would possess you to own both, let alone make them a single outfit? Nothing can be said. This is beyond.

Happy Martin Luther King, Jr. Day, dear readers. Apologies if these entries start getting a little shorter; I've been hired by Queerty to recap Girls and RuPaul's Drag Race, plus I maintain a couple other blogs, so I'm stretched a bit thin. I am nonetheless committed to continuing this project and will never let it fall completely off my plate, have no fear. Still, I wanted to offer a preemptive explanation in case these deconstructions start to resemble blurbs in the coming weeks.
Posted by Unknown at 8:00 AM