Well, this is a sorry turn of events. In today's hour-long episode, the Huxtables sit in the living room and reminisce about earlier times. It's a clip show, y'all! I thought about doing a retrospective of my own favorite outfits, but then I realized that there are still "present day" scenes to contend with, so I technically still have new clothes to tackle. If you want, feel free to take a moment and reflect on the looks from the past few seasons that have brought you joy. 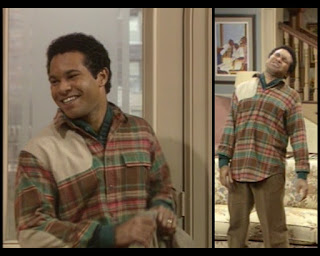 I love that image on the right. He looks like he's just been shot.

The reason for the family's storytime gathering is that Elvin and Sondra have had their first marital spat, leading Elvin to come to his in-laws for comfort. (This nonsensical choice is later semi-justified when it is revealed that his own parents weren't home.) It's interesting how his career as a wilderness store owner has given him a fashion direction. He started out as the college chauvinist, with a fairly plain jeans-and-plaids style to match that. His clothing got a little softer in its coloring as he became sweeter and more open-minded. Now with the outdoorsy direction in his life, he seems to have found a groove. These pieces, and the way they are combined, represent his most daring effort to date. If I'm clocking this right, he's wearing a forest green wool sweater under that plaid shirt. While I can't necessarily call that ideal, I have to tip my hat to the courage it takes to try it. The shirt itself is in similar "A for effort" territory: I don't adore the elbow patches (and actively dislike the single shoulder patch in both size and placement), but nonetheless respect his willingness to think outside the department store mannequin. If the big khaki chunks were gone, I think I'd give him a passing grade on this one. I might also recommend pants in a different shade just to keep this from being too uniform in its medium brownness. 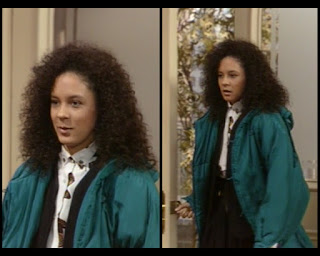 Why did it take her so much longer to get here than him?

Sondra happens by later and is (understandably) shocked to find Elvin horning in on her turf. Her role in the episode is brief, however, meaning that we only get a couple quick shots of her and no clear indication of what exactly she's wearing. While I can't make a lot of sense of all the black garments, I think I can say with some certainty that she's wearing Vanessa's hat shirt from episode #3.24. My guess: whatever's going on beneath that aqua jacket ain't great. She looks tired. Don't worry, Keshia, I thought it was a boring episode, too.

This ensemble illustrates the strategies that must be employed when dressing growing children. When last we saw these pants in episode #3.1, they were quite roomy; now, they're practically leggings. On the other hand, that sweatshirt is so huge that the sleeves have to be rolled just to make sure Rudy can still use her hands. I wouldn't be surprised if the salmon top reappeared in a future episode fitting just fine. 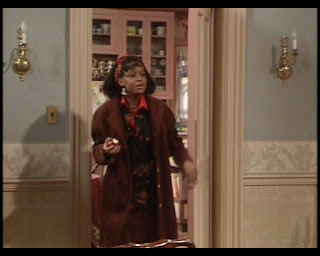 I'm ignoring her earrings, and you should too.

Vanessa also gets the short end of the script this week, and her abbreviated screen time makes my job difficult. What I'm seeing here is fairly refined in comparison to some of her previous stunts: she's kept the palette restricted to the spectrum of black-brown-red, with some mustardy accents. The overall impact is shapeless, but there's a certain charm to the use of color and the way she's coordinated all the layers. Plus, the production team has continued with her never-discussed but often-illustrated love of apples, which is a detail that I adore completely. It might be her strongest character trait. 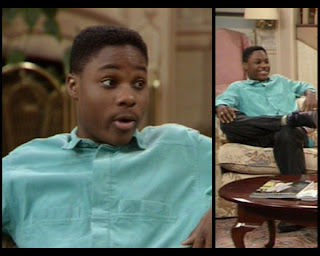 You know what? It could be a lot worse. In the first season, this would have been considered pretty mediocre for Theo. In light of his extended slump, however, it becomes a revelation. A collar, for heaven's sake! Pants that vaguely fit! Are there problems here? Absolutely. But since the turquoise looks nice on him and none of what he's wearing would be appropriate for a jog or other workout, the best we can do is offer positive reinforcement and hope that it leads to continued success. 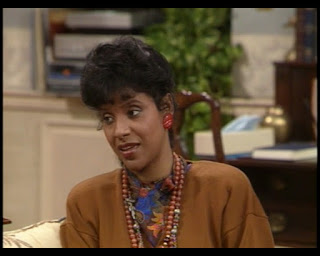 You know who's full of wisdom and sage advice? This lady.

We'll get to Clair's full-length look in a minute, but I wanted to start in close-up because of how delicious that blouse is against those necklaces. There's this miniature explosion of vibrant hues around her neckline that completely enchants me. Pairing such splendor with a neutral top isn't totally incorrect as an instinct, but when we step back, it becomes clear that she has taken the desire for subtlety too far. (Oh, and I don't want to talk about the fact that the clearly visible shoulder pads still can't lift the sleeves high enough to get that seam up past her god damned armpit, so let's just ignore it.) 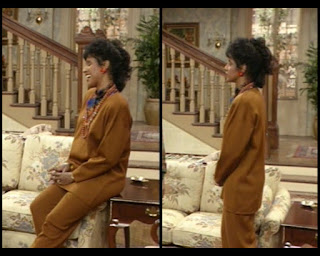 The difference in her shape between those two angles is ridiculous.

Beyond the obvious problem of getting lost in a sea of bronze-colored fabric, there's the weird fit situation. I'm OK with the sort of tunic-y thing happening with her shirt, but there's not enough structure to anything. From the side, she looks unreasonably thin, but then she turns slightly and there's all this extra pillowy bunching for no reason. You're getting close, Clair, but you're not there yet. This isn't good enough for you. 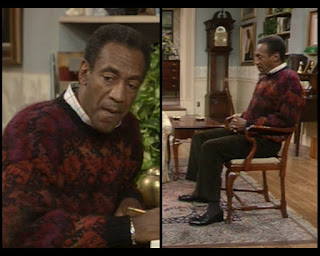 Cliff has worn a sweater with this pattern in episode #4.4, and a sweater with this coloring in episode #3.14. With this garment, he thus takes his "sweater made of sweaters" concept to a higher plane, considering what would happen if two pieces of clothing could procreate and make a genetically merged offspring. Truly, this man is a wizard genius from another dimension. White, neatly criss-crossed collar? Wonderful. Brown pants? Not great with a black top and black shoes, but whatever. (The possibility exists that those are actually faded black pants, but that's no better. Get rid of your black pants if they're not black anymore.) Solid overall.

Wasn't that a fun trip down memory lane? I thought about linking to the individual episodes they referenced, but there were a lot of clips (remember, this was an hour-long episode), so you'll just have to watch for yourself. Were you really going to look back through 20+ previous entries anyway? You know you weren't.

See you next Monday, all.
Posted by Unknown at 8:00 AM