When Rudy learns that the old woman down the street isn't taking her daily pill, the Huxtables mobilize with one of their signature clever plans to make sure that she stays medicated. Also, Sondra and Elvin are home trying to convince people to spend the night in sleeping bags in the back yard. Basically, everyone has an agenda this week. 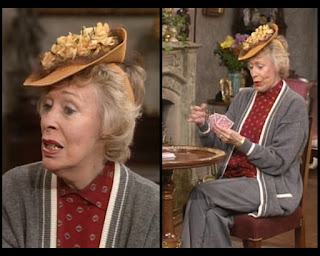 Mrs. Hickson, the stubborn old broad on whom most of the episode focuses, is played by Eileen Heckart. She was nominated for an Oscar for The Bad Seed and later won the award for Butterflies are Free. Her final acting role was in the TV series Cybill in 1998; she died of lung cancer three years later. The scripting for her character is a little unfair in that no one ever discusses the side effects of her pill or any of the legitimate reasons she might have for deciding not to take it. As a result, she just seems like a weird, stubborn old coot. Costume-wise, she is very much an old lady at home. I like that she's dressed comfortably but not lazily: the blouse and slacks coordinate nicely, and the cardigan matches. The roomier clothes allow her to lounge, while the austere colors, high collar, and other details lend a little extra dignity. No sweatsuits for this gal. (I'm not counting the hat because she's wearing it as a costume piece for her tea party with Rudy.) 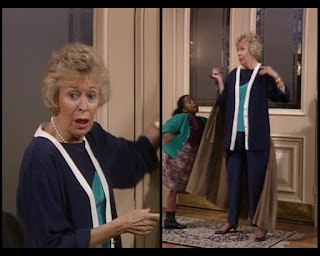 This teal is the real deal.

Since she's the focus of the episode (and the only actor in the place with an Academy Award), she is the sole cast member to be granted a second outfit. It makes sense: she was invited to someone's house for dinner and wants to look nice. The choices here say a lot about her character. For instance, notice that she's wearing similar pieces as before: slacks, shirt, long cardigan with a white trim. She's a woman of habit. Also, her pieces match well, making her a bit of a functional dresser as opposed to someone who mixes and matches. Again: set in her ways. To me, the best touch is the string of pearls that she tucks into her shirt. This detail lets you know that she wants to look formal without being ostentatious. Overall, it's an age-appropriate look with some good storytelling packed into it. 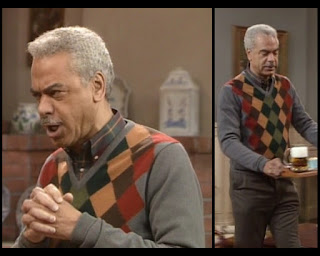 I want this man to be my personal shopper.

You know what's awesome? When Russell gets a new outfit. Grandpa is a snappy dresser, and this shirt/sweater combo exemplifies why. He's all about vibrant prints and he knows how to combine his garments. While the collared shirt wasn't designed specifically to go with that knit, he recognizes the synchronicity between their palettes and fuses them to make this dynamic ensemble. Wisely opting for a neutral pant, he delivers a dynamite presentation that probably made everyone else jealous. I mean, there's just no way that anyone's going to top this. 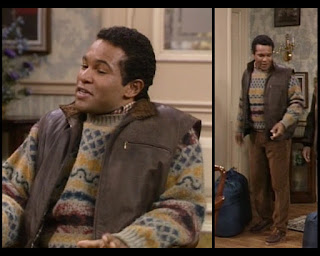 I guess he looks like this because of the wilderness store?

Elvin hasn't mastered the art of cold weather dressing like his in-laws. Though his sweater is puffy and weird, it's not insane or interesting in the way that Cliff's might be, nor does it have the stylish structure of one of Russell's pieces. Similarly, he tries for a patterned shirt beneath it so that the collar can push things a little further, but the checker looks out of place and busy next to the other things he has going on. I don't dislike the sweater and corduroys together, and really this isn't a bad look overall. If there weren't such a rich history of awesome sweaters in this family, I'd probably be less critical of him, but with the standards being as high as they are, it's tough not to want more. As for the vest, I'm choosing to ignore it. First of all, he takes it off later, which makes it sort of a coat and thus not part of this blog. Second, it's ugly and we should just avoid it until it goes away. 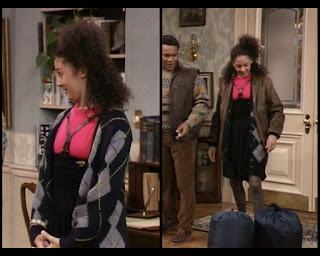 Girl. It's a family show. Slow your roll.

Inappropriate, Sondra. Let's get this out of the way: those suspender straps are designed in a way that perfectly outlines her hot-pink boobs. She is straight-up presenting. Hey, everyone, I've boxed off and highlighted my breasts! Please look at them as they emerge vibrantly from the sea of gray and black I am otherwise wearing. Which is not to say that this is a failure. There are things about this ensemble that I love. A cozy knee-length cardigan can really work, and you can't deny the courage it takes to contrast such a piece with plaid tights. If she had selected a simpler black dress underneath, she would have been doing alright. But the neon is a little much, especially when used mainly to remind us of the exact size and placement of her tatas. The gold brooch is probably also terrible. 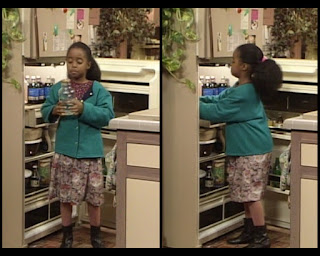 The joke about cornflakes floating in the water jug grossed me way out.

The first time we see Rudy, she's wearing an ill-fitting jacket/sweater thing. I'm including it to illustrate just how important it is to check how the tailoring of a garment affects your perceived body shape. Color and style aren't enough on their own. 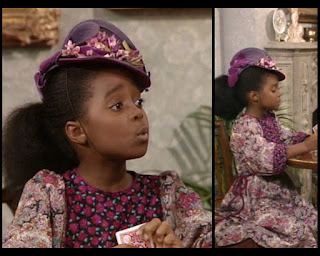 Her fascination with aristocracy fascinates me.

Underneath, she's wearing an ornately decorated dress. I appreciate how it impresses as pink or purple overall but is really made up of a sea of different shades. My guess, though, is that this isn't a regular rotation item for Rudy, but rather a dress-up or costume piece. This little girl sure has a lot of fancy frocks. Rich people, man. 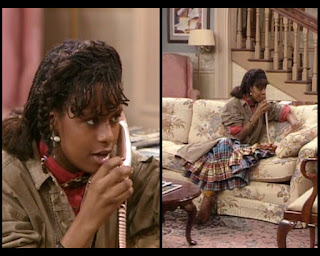 Another sad case of insufficient exposure.

Vanessa's whole situation makes no sense this week. She barely gets featured, and yet she's in what might very well be a show-stopper of a skirt. The excess of ruffled, multi-toned plaid speaks to me. I'd also be tempted to call that long garment a coat, but there's no indication that she spends even a moment outside, so I guess it's just a long shirt? It would have been smarter for her to go plainer and darker with her other garments so that the bottom half could have taken center stage. When you have a piece that dynamic, typically your best move is to let it shine. The red and tan sort of blend with the skirt rather than contrasting and defining it. I shouldn't have to search: everything should be directing my eye toward that piece naturally. 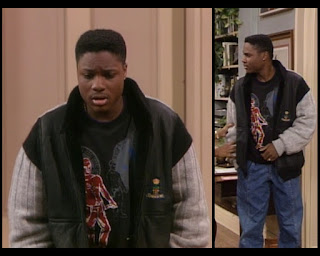 What are the dudes on his shirt doing?

Theo barely appears this week, but I barely care about his clothes, so it's no major slight. I'm looking forward to the day when he retires these jeans with the seams down the front because they're not OK. And is that a sweatshirt with a lame print I spy? The shock is too great; I may go into cardiac arrest. 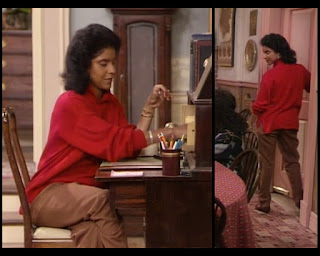 Is that all you got? (Spoiler: I know that's not all she's got.)

The surprise let-down of the week is Clair, whose fashion sense seems to have departed. Sure, she looks great in red, but that long-sleeved polo is totally shapeless, while the popped collar adds insult to injury. Below, she's rocking slacks that are dangerously similar to her actual flesh tone. One must always be careful about that. Too often, I've seen someone from afar and worried that they are both naked from the waist down and deformed in some way. Don't tell the world that you have weird, lumpy tree trunk legs: tell them that you have fabulous pants. To do that, of course, you need to actually be wearing fabulous pants. 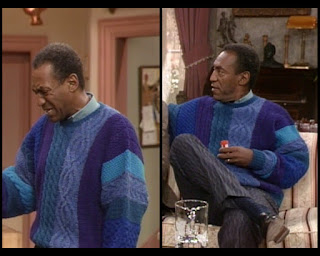 I would wear one or two of those sweaters.

Closing things out, Cliff goes for another Sweater-of-Sweaters, uniting multiple cool-toned cable knits into a Frankenstein's Garment. It's ALIVE. Maybe I've just been numbed to his antics, but the top half totally works for me. It's all in the blue family, and everything seems organized and sensible. I'm fine with it. It's the pants I can't handle. Rather than leaving well enough alone with the pin stripes, he opts for a hideous pattern that presents horizontal bands of vertical lines. There's no continuous up-down connection, just disparate inch-long white dashes. It's the worst idea. Do not follow this example. If you find pants like this, destroy them. They're offensively bad.

I long for an episode that requires the family to dress up. Hopefully Denise will be home when it happens. Nobody's really giving it like they used to, right? But don't let that stop you from reading. My audience is all I have! Until next time, Followers of the Hotness. Take care.
Posted by Unknown at 8:00 AM