The DVD puts this episode a week later for some reason, but I'm trusting the IMDb listing because the internet is my higher power. When Clair learns that her hairdresser also styles the producer of Dance Mania, a Soul Train knoock-off favored by the Huxtable kids, she gets Theo two tickets to appear on the air. Though he and Cockroach practice their routines and get all dressed up, they learn that they are not guaranteed entry into the studio. When space opens for one of them to enter, Cockroach takes the opportunity and Theo gets super mad. The incident must take a serious toll on their friendship, because Cockroach never appears on the show again. Sad news. 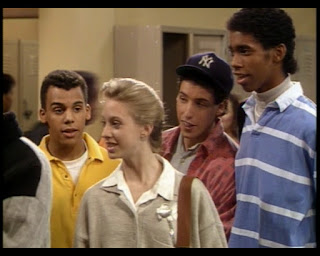 To join this gang, you have to be going through your awkward phase.

Good thing Theo has other friends! I'm not going to look at them individually because none of them are doing anything particularly stunning. I do think it's nice that the costume department helped them look nice as a unit by ensuring that no one was wearing the same colors. The real reason to pay attention to this random smattering of teenagers is because one of them is Adam Sandler in his first-ever television appearance. He'll pop up in a few more episodes; maybe we'll look at his outfits more closely next time. 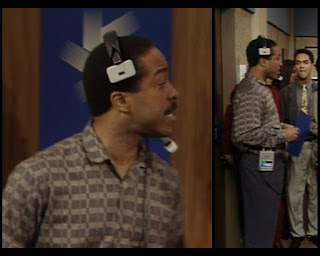 He likes to say that he inspired Madonna's mic choice.

This guy with the headset is the one who gets all Sophie's Choice about entering the studio. Robert Gossett, the man behind the character, made his acting debut with this role and has done rather well for himself since then. He regularly pops up in movies and TV shows; you might recognize him as Commander Taylor on The Closer. I get the impression that he's using this shirt to try to look young and hip since he's surrounded by high schoolers all day. Sorry, sir, but it's not working. The pattern is somehow bland and eye-catchingly bad at the same time, and while the pants don't clash, they're not being all that helpful either. 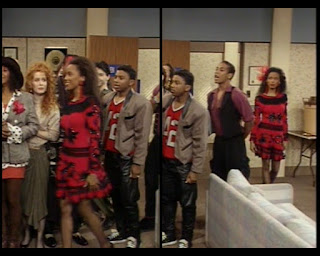 Even Cliff is sweet on her, but I'm unimpressed.

The Dance Mania dancer that all the boys have a crush on is Tina. There's no credit for her online, but one of the guest stars is "Donna Wilder," so I'm guessing that's who this is. The IMDb listing for an actress named Donna Wilder contains no picture and only one role in an educational video to teach people beginning English. Anyway, this dress is ludicrous: everyone else is dressed like a totally '80s teen, and she looks like she raided Ann Miller's closet. It's a costume, right? I refuse to believe that anyone would wear that beaded monstrosity with the intention of looking like a regular yet fashionable person. 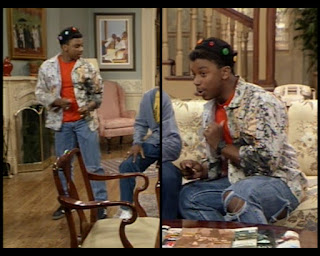 At least if Cockroach is leaving us, he's giving us two ensembles. His first offering is immediately distinctive because of that hat. The accessory is most recognizable as the type of cap worn by Jughead in the Archie comics. Though earlier versions were known as whoopie caps, by this decade they were more likely to be called a dink or rat cap. A surprisingly complete history can be found here. I think they're kind of dumb, I'll be honest. Taken as a whole, this look seems overeager. He's got the hat, the torn jeans, the bright t-shirt, the splattered shirt over it: every individual piece is selling us something, but seldom the same thing. There's no point of view here. It'd help him to find an overall theme and then apply an editorial eye. 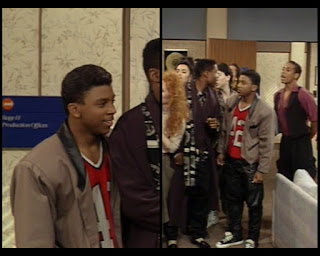 Imagine the antics he could have inspired had he stayed another season.

Same problem with his "I'm gonna be on TV!" outfit. The faux leather pants go with the jacket, though neither item fits him particularly well. Those shoulders are a complete mess, and the black detailing would only be acceptable if it were cloth rather than plastic or whatever that is. But then he brings in the sneakers and the sports jersey and he loses me. That red has no place in this creation, and the relaxed nature of these pieces make him look lazy rather than inventive. He could have maybe gotten away with a t-shirt, but the team uniform was a step too far. 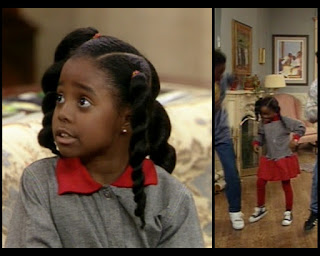 That must be uncomfortable, or even impossible, to sit in.

It must be acknowledged that Rudy's first outfit is insane. Everything's pretty normal at first glance: lots of red with a little gray thrown in. No biggie. But then you look at that skirt and realize that its construction is crazytown. It juts out literally horizontally from her waist and then shoots straight down like a cylinder. I can't adequately describe the shape, but those ruffles approximate what would happen if you stuck several rolls of paper towel to someone's thighs. Like, looking at her from head-on, it's a rectangle. From above, it would look sort of like a flower. I'm at a total loss as to how or why something like this could ever have been built. It defies reason. 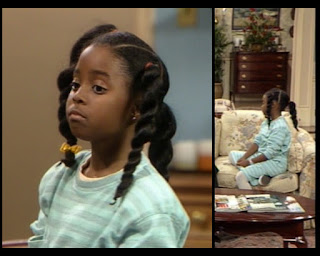 This girl can throw some serious face.

I don't even think that's a dress. I think it's just a too-big top and no pants. 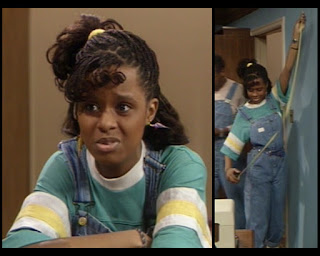 How did her earring get perpendicular? Hair snag? Head wave? Wind?

Vanessa starts off the episode in overalls because she's helping her father build a shelf in his office (even though he and Theo already built a shelf for his office less than a year ago). This leads to a subplot about teaching Cliff "new math," at which he is terrible. There's not much to say about her presentation here. It's overalls and an old t-shirt. You wouldn't get all dolled up for a construction job either. 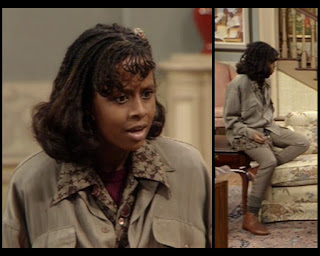 BOOTS ON THE COUCH! (This will always bother me.)

On day two, she hauls out her episode #3.6 shirt (that she took from Denise) and pairs it with the most boring matching shirt and pants she can find. Like, that's barely a color. Why bury your best piece under a drab sack? She's also teasing us with a sort of burgundy t-shirt underneath, but overall seems content to keep the enjoyable garments entirely obscured from view. It's a sort of power play or sartorial torture or something. Sick. 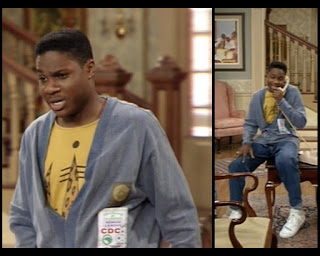 DON'T SIT ON THE END TABLE! (I'm going to be THAT parent one day.)

To keep Theo's spirits up, I'll give him some positive notice for the good parts of his wardrobe. For instance, I'm supportive of cardigans as a concept, even if this one is a little ragged and has patches I don't particularly care for. And the yellow t-shirt is fine. The jeans are inoffensive. Whatever. This is a completely acceptable showing. 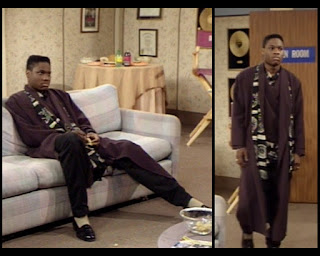 You're dressed for the wrong party. Also, don't go to the party where this would work.

But then he gets the chance to go on Dance Mania and he dresses up like Prince's bodyguard. What are these pieces? Black slacks and black shoes I can understand. And sure, if you absolutely have to do the Michael Jackson thing and wear light socks, then go ahead. You're young, you can occasionally get away with dumb crap like that. But then the top half? I truly don't understand fully. The trench coat and scarf, sure, but then under them is... a kimono, maybe? Some manner of wrap vest? With a matching black-and-white t-shirt after that? This seems like entirely the wrong thing to be dancing in while studio lights blast down on you. He needs to remove at least two layers and never again try to look like a rakish gangster. 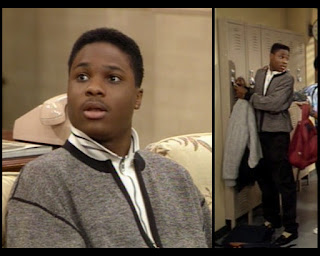 Fun fact: Dance Mania filmed on Saturday. If Theo is in school when it airs, then it's at least Monday. Not getting on the show must have hit him pretty hard, because he's been wearing the same pants, socks, and shoes for no less than 48 straight hours now. Ignoring that, this outfit actually has a lot of potential. The monochromatic theme plays well for him, and we just discussed my love of cardigans. This one especially works for me, with the dark border and contrast seaming giving it a touch of dazzle despite the lack of brighter hues. My concern is that polo shirt. First off, don't pop your collar. Ever. Also, the shirt appears to zip down the front, which makes it look almost as though he's wearing a second cardigan under the first one. That's just overkill. Let people know that your shirt is a shirt. 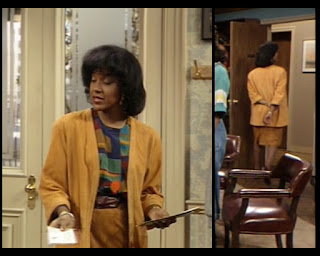 She can never be all the way wrong.

Clair doesn't do a lot in the orange range, but this sunset suit isn't half bad. I wish the jacket had more of a lapel, though; something to structure the area around her face and chest would help this a lot. The blouse (from episode #4.5) is close to right, but not all the way there: I love the blues, but think the other shades of orange just distract. I'd have sought a pattern with more reds and fewer yellows. 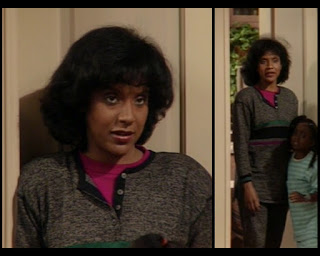 Not even when she brings back a substandard outfit.

Her second look is repeated from the first episode of this season. 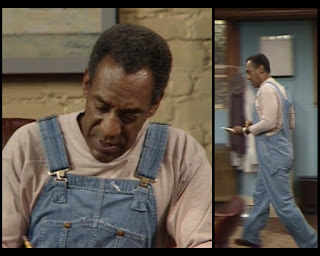 He's an obstetrician and a handyman. Skillz, y'all.

Cliff also starts the episode in overalls. I also don't care about his overalls. 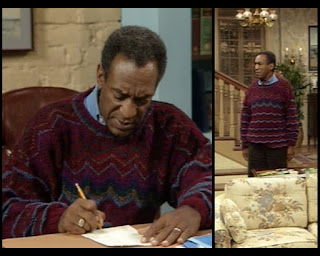 Too big. He's shaped like a gumdrop in that long shot. Up close, I appreciate the complexity of the various shades making up the zig-zagging stripes on the sweater. I get the impression that whoever made it got tired halfway through, though, because the pattern becomes much more mundane below his ribs, and the fit spins out of control. I want to see the goodness of the first part continued. There was so much promise in those shoulders. Otherwise: brown pants blue shirt. Sure.

Well, that was a whole lot of clothing, wasn't it? Come back next Monday. There will be yet more.
Posted by Unknown at 8:00 AM