This week, Theo gets in trouble after he and a friend drive to Coney Island even though neither of them has a license yet. Cliff and Clair get into a fight about nothing and neglect to discuss their son's punishment, leaving him in suspense about his fate. He lucks out in the end when a romantic resolution of their differences leads them to handle his transgression with leniency.

Since the episode is light on things happening, we get our first trip back to Cliff's office in a while. Something's got to fill the time, right? This unnamed patient is played by Freda Foh Shen. I was most familiar with her for her voice: she played Mulan's mother in the Disney film and its direct-to-video sequel, and was the drive-thru lady in Dude, Where's My Car? (which I'm sad to admit that I actually saw). She also apparently made a brief appearance in the recent Star Trek film. I'm not sure that I really have anything to say about what she's wearing, as this show aired at a time when maternity wear was designed expressly to make pregnant women look as much like furniture as possible. Those flats are cute, though. 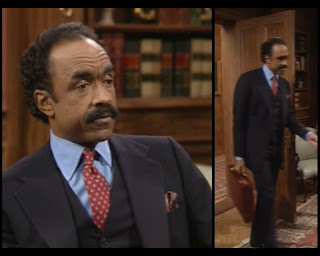 He best not try to pull "excuse me" face on Clair. She OWNS that face.

Ron Foster appears as Mr. Hanson, a lawyer with whom Clair is negotiating. He has a long resume of smaller roles, though only a handful of those appearances occur after this episode. Like the previous guest star, he doesn't leave me with much to comment on: a navy three-piece suit is sort of beyond reproach. I guess we could quibble about the shirt and tie choice, or the way that his tie's pattern conflicts with the more complex print of his pocket square, but that's not why you're here. We've been through it before, it's better to just move on. 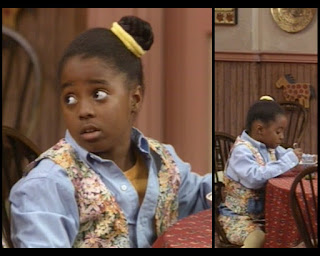 Rudy can rock some "excuse me" face too, apparently.

Rudy's bringing spring into her wardrobe with lots of yellow and flowers, but the print is too heavy for a vest and shorts: you're really going to want to pick one or the other. Even though she's six and she can get away with a lot more, she's going to want to start building good habits now so that she's prepared when middle school hits and people will savage her for this kind of excess. Otherwise, this is totally acceptable. 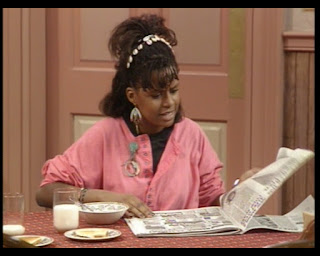 Please tell me you're looking for new places to shop.

I don't think there's any full-length footage of Vanessa during the episode, so I'm giving you the best image I could capture. The theme of today's outfit seems to be accessories: she's going for broke on the shell headband, dangly earrings, giant pin, and even an overdose of buttons. Otherwise, it's a sea of pink: there's a moment when she walks through the background of Rudy's close-up suggesting that she's wearing a matching long skirt, but I didn't think it was worthwhile to include a blurry shot of half her butt as corroborating evidence. You'll just have to take my word for it.  Anyway, an outfit of mostly one color often feels like a missed opportunity to me. Unless you've done something really spectacular from which added detail would only detract, you're basically just admitting that you can't figure out how to pick shades that work together. 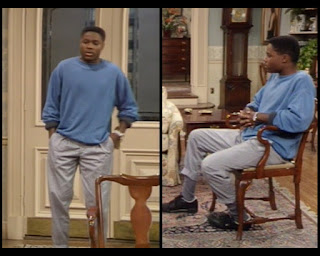 Vanessa's looking for new places to shop. You should join her.

This is what Theo was wearing when he got picked up by the police. The Fashion Police, amirite? Seriously, though, we're dealing with some fit issues in those pants, the puffy contrast cuffs on the shirt are just horrible, and everything else is too bland to notice. 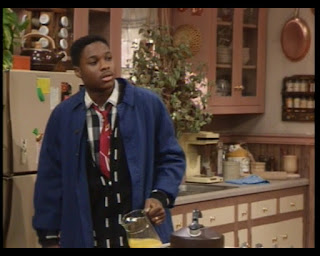 Didn't we almost have it all?

He gives a lot more the next day, but the director never provides a full view of the creation: Theo's always cut off just below the waist and covered by that big cobalt trench coat. He seems to be doing a lot of experimentation with the interplay of black and white patterning, plus the catchy accent of an apple-red tie. This might be one of the best outfits he's given us in the last two seasons, but that's largely speculation. I feel I've been cheated out of of a joyous moment. 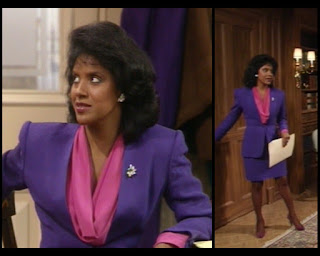 She paints with all the colors of the wind.

Clair serves up a clone of her episode #4.2 suit rendered in vivid technicolor. Mostly, I think she looks smashing, though I worry that my drag queen sensibilities have blinded me to the outlandish nature of this ensemble. Are the purple and pink ridiculous together? Can this plausibly be worn in a serious work context? I can't tell anymore, I love her too much and I'm too enamored with preposterous palettes. My gut tells me that she needs to tone it down a hair, but my heart tells me that this is PERFECT. 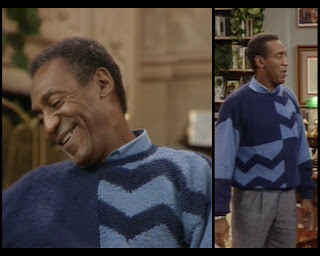 If he didn't have a few normal sweaters, then opening his closet would literally blind him.

Cliff's first outfit is pretty tame. The sweater is, perhaps, a composite of two sweaters, but that's a light day for him, in all honesty. Nothing here clashes or seems out of place; he even managed to find a collared shirt that perfectly matches the lighter blue of his outer garment. Loving that thick yarn, too: something with easily visible stitching always seems cozier. 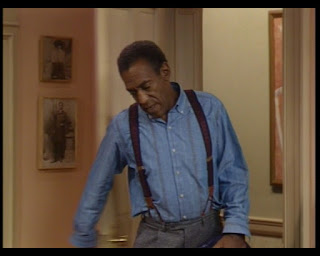 It's worth nothing that when the sweater comes off, there are suspenders underneath. I'm beginning to suspect that he is always wearing them. Once again, I feel he should get more credit for popularizing this accessory. 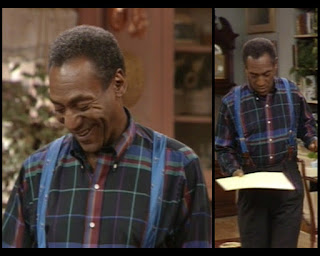 I mean, check out his second look. Silk suspenders, front and center. They look gorgeous, simultaneously standing out and merging effortlessly with his striped shirt. This presentation is just fantastic. Basic black never goes out of style, and the brighter stripes are at once structured and unexpected. He's rubbing against boundaries in all the right ways here, and I can't get enough of it. This is pretty much the height of dad fashion. Leave the sweaters alone, Mr. Cosby, you've got a good thing going on without them.

Another short entry, it seems. I guess part of that can be attributed to my own laziness. I'm giving myself a bit of a winter break. But also, the episodes have featured fewer characters, fewer costume changes, and fewer interesting choices. Hopefully things pick up soon; I don't want to bore you all or, heaven forefend, lose readership. Well, happy new year regardless. See you next week.
Posted by Unknown at 8:00 AM